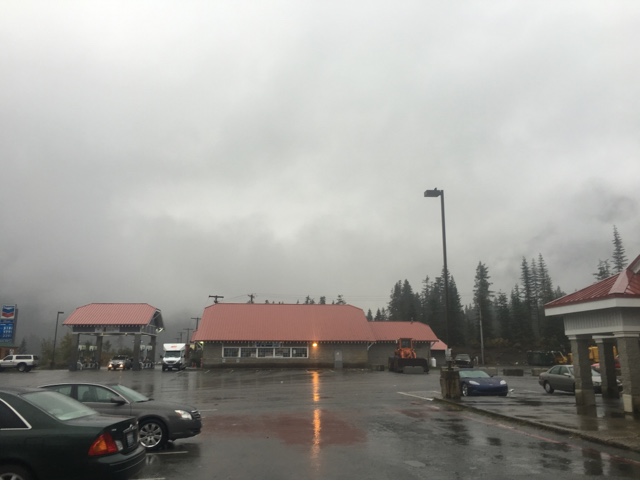 Rain delay
I woke up with the intention of hiking out today. I'm so close to the end and I'm really looking forward to hiking through North Cascades National Park. I was up at 6:30 and I could hear the rain pelting the windows of my hotel room. I was immediately disappointed. The chance of rain for this morning was really low. When I looked out the window things did not look good. I got dressed and went outside to take a better look. It was really cold and pouring down rain. I decided to grab breakfast and see if it would clear up. I checked all four weather apps that I have on my phone. The forcast did not look good.
The hotel had a Waffle House type restaurant. I ordered a cup of coffee and French toast with strawberries, blueberries, bananas, and whipped cream. They were very good, but I wished it was a little bigger. Checkout wasn't until eleven o'clock. I figured I could wait to see what the weather would do before I made a final decision. 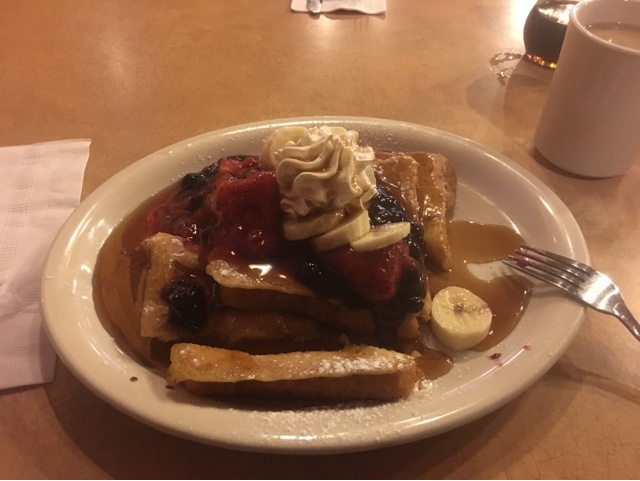 Breakfast of champions
I was really behind on my blog, so I went back to my room and began to try to get caught up. The rain continued and I managed to get one blog post written. I packed up all of my stuff in case I decided to leave. I really couldn't afford another night in a hotel, but the prospect of heading out into the rain wasn't very appealing. I had just gotten all of my gear dried out. The forcast called for rain for most of the day. It didn't look like it would clear up until after five o'clock. I finally decided to take a zero, even though I couldn't really afford it. I really just want to finish before it gets any colder. The deciding factor was that by taking a zero I could catch up on my blog. I spent the entire day holed up in my room writing. I only came out for food and to get into the hot tub.
A few of the other hikers were hitching into Seattle later in the day. I thought about tagging along, but I decided against it. I wanted to go to REI, but I didn't want to lose four hours of writing time to go. Instead I gave my credit card and member number to, Crush. She returned my gloves that were too small for me. I also had her exchange a pair of Darn Tough socks that were wearing thin. I managed to accomplish all of my chores without having to bother with getting to Seattle.
I went to lunch at a place called the Aardvark Express. It was a food truck permanently parked next to the hotel. I had a bacon cheese burger with an egg and cream cheese served on a brioche bun. It was really good and even came with some curry lentil soup. 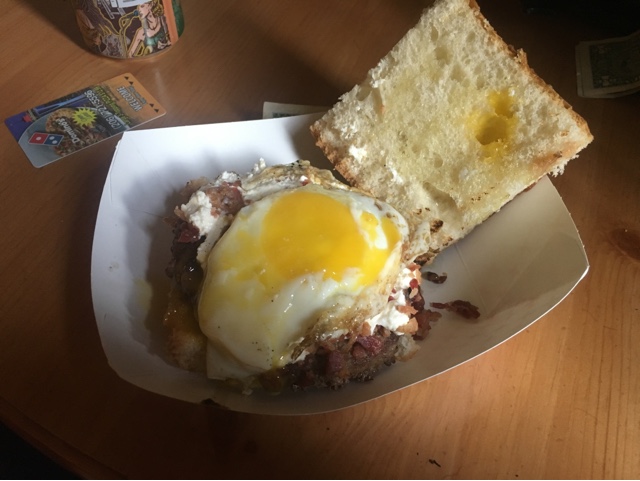 Cream cheese and egg on a burger takes it to the next level
I managed to get a few blogs posted before I turned on the tv. I very rarely watch the boob tube when I'm in town. I kept it on mainly for background noise. I did some research into plane tickets for after the trail. Prices aren't as bad as I had feared. I haven't booked anything yet, but I'll need to do it soon. The longer I wait the more expensive it will get. I had hoped to take a road trip along the coast after I finish, but it doesn't look like that will happen. I have spent way more money on this thruhike than I did on the AT. I also have a few expenses that I hadn't planned on. I managed to secure better housing for my job in Telluride this winter, but the deposits are more than I had taken into account for.
By six o'clock I only had two more days of the blog to write. I took a break to go get dinner. I wasn't really super hungry so I just got snacks from the convenience store. Dinner consisted of Starbucks Frappacino coffee drink, chips, an oatmeal stout, and a pint of Ben and Jerrys ice cream. It definitely wasn't the most nutritious dinner, but it was tasty. I will miss eating like a stoned college student when the trail is over. 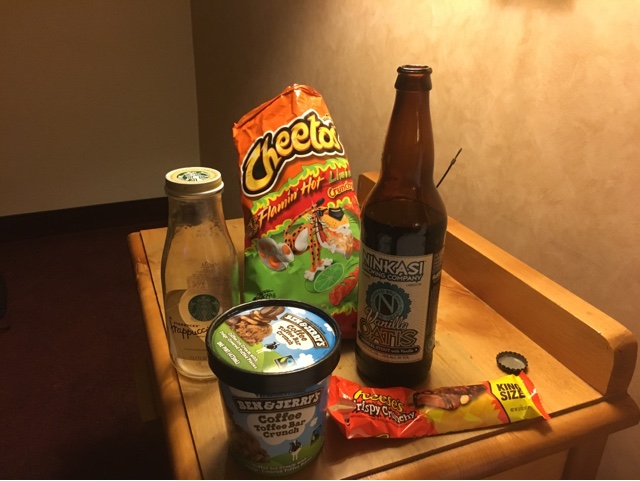 Dinner
I had hoped to get to bed early, but that was an epic fail. I didn't finish writing until almost eleven o'clock. I realized that I still hadn't downloaded a new audiobook. It took me over an hour to decide what I should download. I'm open to suggestions for my next book. I would prefer something that is part of a series, but I'm open to anything. I tend to like science fiction, fantasy, thrillers, and murder mysteries. One of my favorite audiobooks is, Ready Player One.
The forcast for tomorrow looks much better. It will probably rain sometime in the afternoon or at night, but it won't be an all day rain like I had on Saturday and today. Hopefully the trail won't be too muddy and I can make up miles.
I have also gotten behind on my thank you's. My last few resupply boxes include a variety of food from, Airlock. Thanks for the eclectic mix of food and thanks for not sending me anything with mushrooms or olives ;-)
A big shoutout to Theresa and Bob Brisko. I really appreciated the cash. I used it to buy breakfast this morning and my beer for dinner. Chris from Nashville, thanks for the Amazon gift card. I used the funds on a spray to renew the waterproof coating on my rain jacket. Dan and Arlene Williams recently gifted me with a new audiobook. Thanks Dan and Arlene. I bought a book by John Scalzi called, Locked In. I'll start listening to it tomorrow. I am one lucky lady to have such wonderful support from my own personal trail angels. My PO box is no longer accepting packages. If you were interested in sending me something I could still use an iTunes gift card. I rarely bother listening to music anymore because I am so tired of everything on my playlist. Thanks again for all of the support.
"Happiness lies even in tiny little butterflies. You just have to open up your eyes and see where beauty flies to beautify your world lenghtwise."
Ana Claudia Antunes
Posted by Yoda at 12:06 AM