Day 121- Where Did My Motivation Go 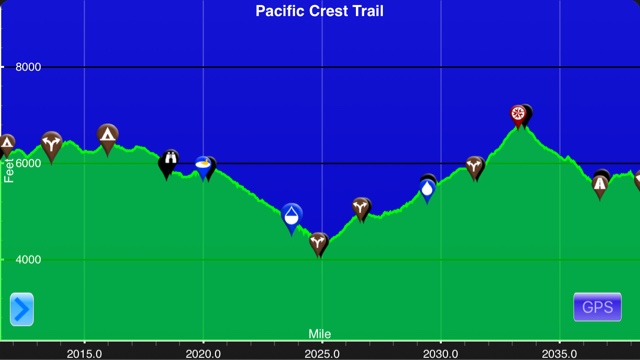 Total up/down: +5,019/-5,754 feet
I am suffering from a severe lack of motivation. The last two days have been a real struggle. Today was especially difficult because of terrain, stomach issues, and I just didn't feel like hiking. Instead of stopping to smell the roses, I was stopping to fertilize the roses(thanks for that quote, dad). I'm hoping that my recent tummy woes will resolve soon. I managed to stay comfortable last night, but just barely. It wasn't the ambient temperature that was the problem, it was the raging wind storm. I thought for sure that my tent was going to rip, but it held up. I didn't sleep very well. Cuben fiber is really noisy blowing in the wind. I had two southbound hikers camped ten feet next to me. To say that they were odd would be an understatement. I know that they were smoking copious amounts of weed, but I'm guessing they were also on something else. At three a.m. the girl began shouting about aliens invading her ears. At four a.m. she proclaimed that she had to pee and not to worry she wasn't a bear or rabid squirrel. At five a.m. her boyfriend began yelling at the wind. By six am, I was over their antics and began packing up camp. The girl tried to get lippy with me about being loud as I was packing up. I almost strangled her. I decided to make some coffee as loudly as I possibly could, five feet away from them. I took extra care to crinkle my poptart wrapper right next to them. The bleary look in my eyes kept them from saying anything else to me.
By the time I started hiking the wind had calmed down significantly. It wasn't really cold out. I would classify it as a brisk morning. I had only hiked for a few miles when I came around a bend and was greeted with a great view of Mt. Jefferson. 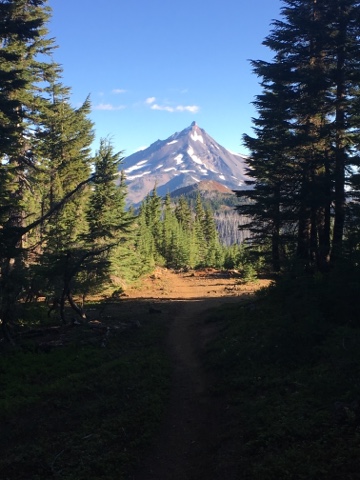 Hello Jefferson
For most of the day I continued to see this beautiful mountain. I think I saw it from every angle possible. 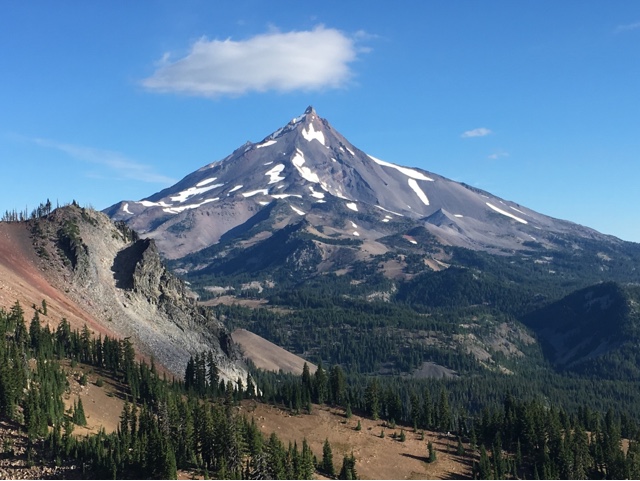 Much closer view
I was making really great time during the first half of the day. I thought for sure I would be able to get in twenty-eight miles. The weather was amazing. It wasn't hot or cold. It was one of the first days where the temperature was just right. I dubbed it a goldilocks day. Just after I stopped for a quick lunch my day rapidly fell apart. My first challenge was a doozy. Everyone always talks about the stream crossings in the Sierra Nevadas, but I didn't think they were too bad. I never felt like I could die. Today was my first taste of absolute fear. I spent almost thirty minutes trying to figure out a way across Russell Creek. It wasn't a matter of finding a dry way across. It was trying to find a safe way across. Finally after thirty minutes I found a somewhat safe crossing. It wasn't ideal, but I thought if I made a mistake I would survive. If it hadn't been so early in the day, 2:30, I would have set up camp and crossed it in the morning. 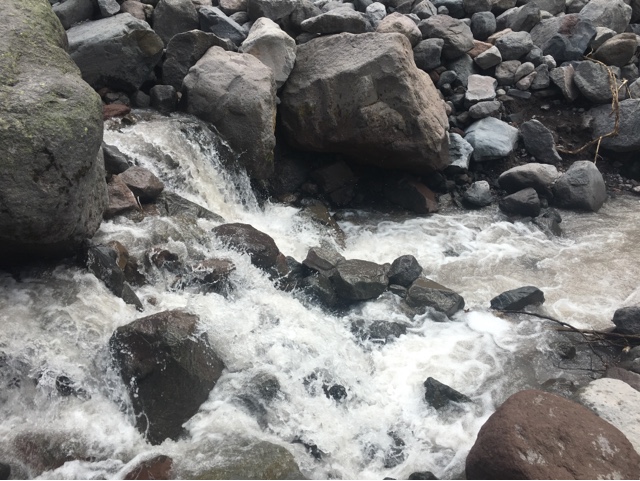 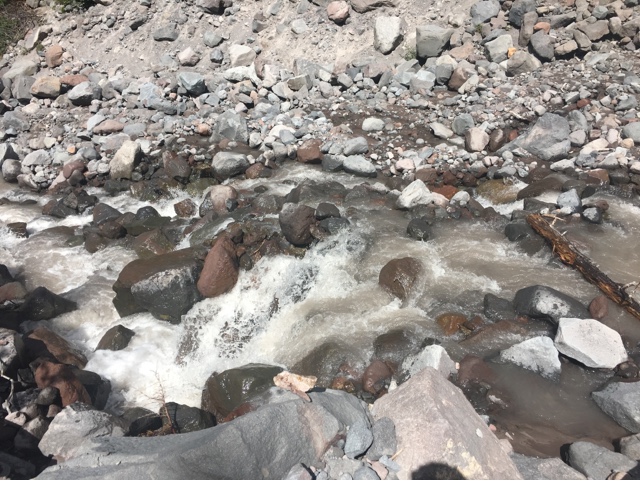 Glacier melt makes the water murky and freezing
I made it across without dying, although I was a little traumatized. I immediately took another break to let my heart rate settle. I definitely didn't expect anything like this from Oregon. I few minutes later the hike went back to normal Oregon behavior. I had a great view of several lakes in the distance. 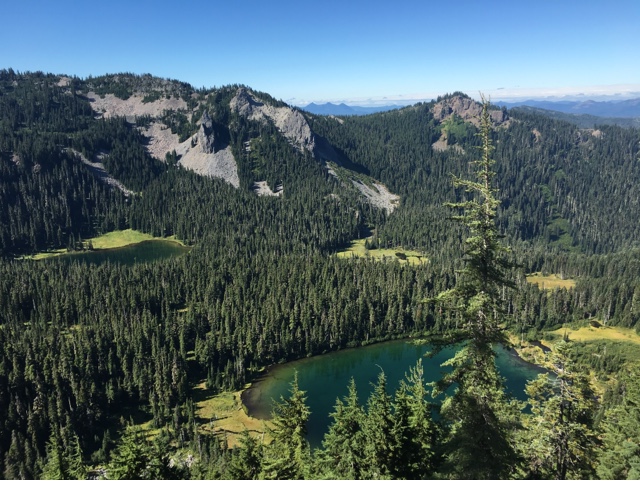 Typical Oregon behavior
In a matter of minutes the weather began to change. The temperature dropped and the wind started to howl. The forecast called for rain later that night. I tried to pick up the pace, but the terrain became more technical which slowed me down. I didn't have to climb to the summit of Jefferson, but I did have to climb up one of its high ridges. The sky was very ominous and it was really cold. I decided to get off of the mounatin and set up camp before the rain started. 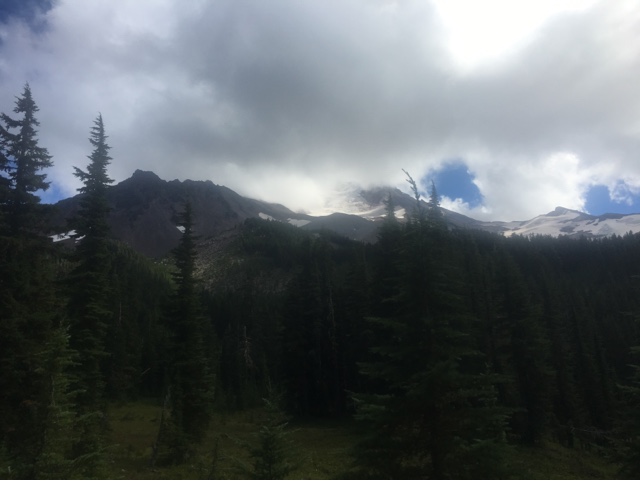 Glaciers of Jefferson hidden in the clouds
It was only six o'clock, but it was getting really dark out with the approaching storm. I found a campground .3 miles off of the trail that had shelters. I hurried to get there before the rain. With the windchill I bet it was forty degrees out. I didn't want to get to camp soaking wet. The shelters at the campground were not what I was expecting. I thought it would be like the shelters on the AT. The only one that wasn't occupied looked like something out of a fairytale. Like where the poor peasant hero character would live. It was a three sided lean-to with a dirt floor. I was just happy to have a way to get out of the wind. The roof didn't appear to be water tight so I still set up my tent inside. I was super excited that I had a picnic table. 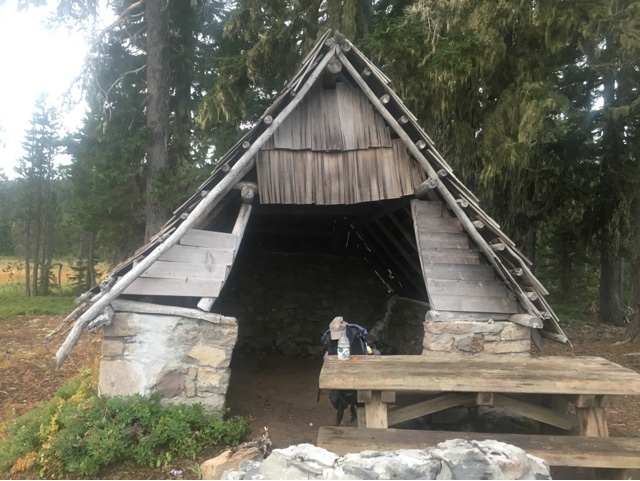 Home for the night
It didn't start raining until almost ten o'clock. I still can't believe that I haven't had to hike in the rain yet. I'm hoping to make it 2,189.2 miles(the distance of the AT) before I have to hike in the rain.
Happiness is your nature. It is not wrong to desire it. What is wrong is seeking it outside when it is inside.”
– Ramana Maharshi
Posted by Yoda at 8:17 AM