Day 31- It Was Bound To Happen

Since I had to write a blog and a half last night I was up until almost 11. I wasn’t very happy when my alarm went off at 5:30. It was also pretty chilly. I was surprised to see that Mangas(I’ve been spelling this wrong) was still in camp. He usually leaves 30-60 minutes before me. We hiked out together at 6:30. I just wasn’t feeling very motivated this morning. I figured that I could shake it off, but the smallest things irritated me. We started the day off hiking on a dirt forest road. The road climbed uphill for about 1,500 feet. It was spread out over several miles and wasn’t too bad. I’m really feeling the extra weight of the food I’m carrying. I’m pretty sure that it will be worth it in the end, but right now it’s not very much fun. About half down the dirt road we somehow missed the turn to get onto the trail. That meant we could either backtrack or hike up a drainage to the proper trail. We chose to hike up a drainage. It was very taxing, but better than hiking back. We are starting to see a lot of wild flowers beginning to bloom. In another week this area will be spectacular. For now I just had to use my imagination. No idea what this is called 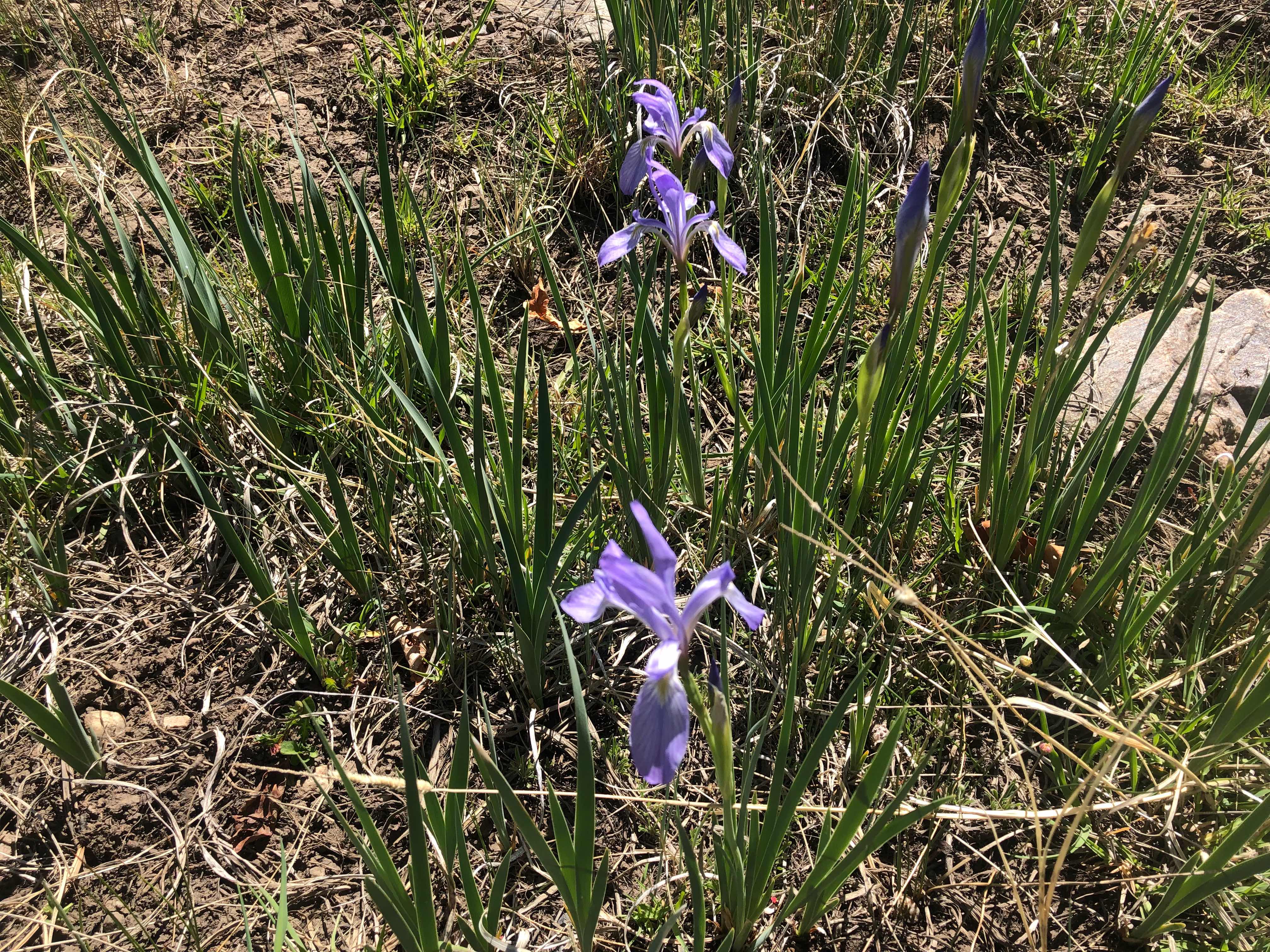 More Iris. The meadows will be full of these soon
We passed by a few cow ponds and troughs, but kept walking. We are in the land of good water and there was no way I was stopping for cow water. Other than the hiccup of missing the turn, our day was off to a great start and my mood was improving. We hiked past huge pine trees, aspens, and pretty meadows. Our first water source was a spring feed trough about 10 miles into the day. We made it there before 10. It is always nice to get 10 miles before 10 o’clock. I hiked out from the water source before Mangus. We had a plan for the day and I knew we would meet up later. 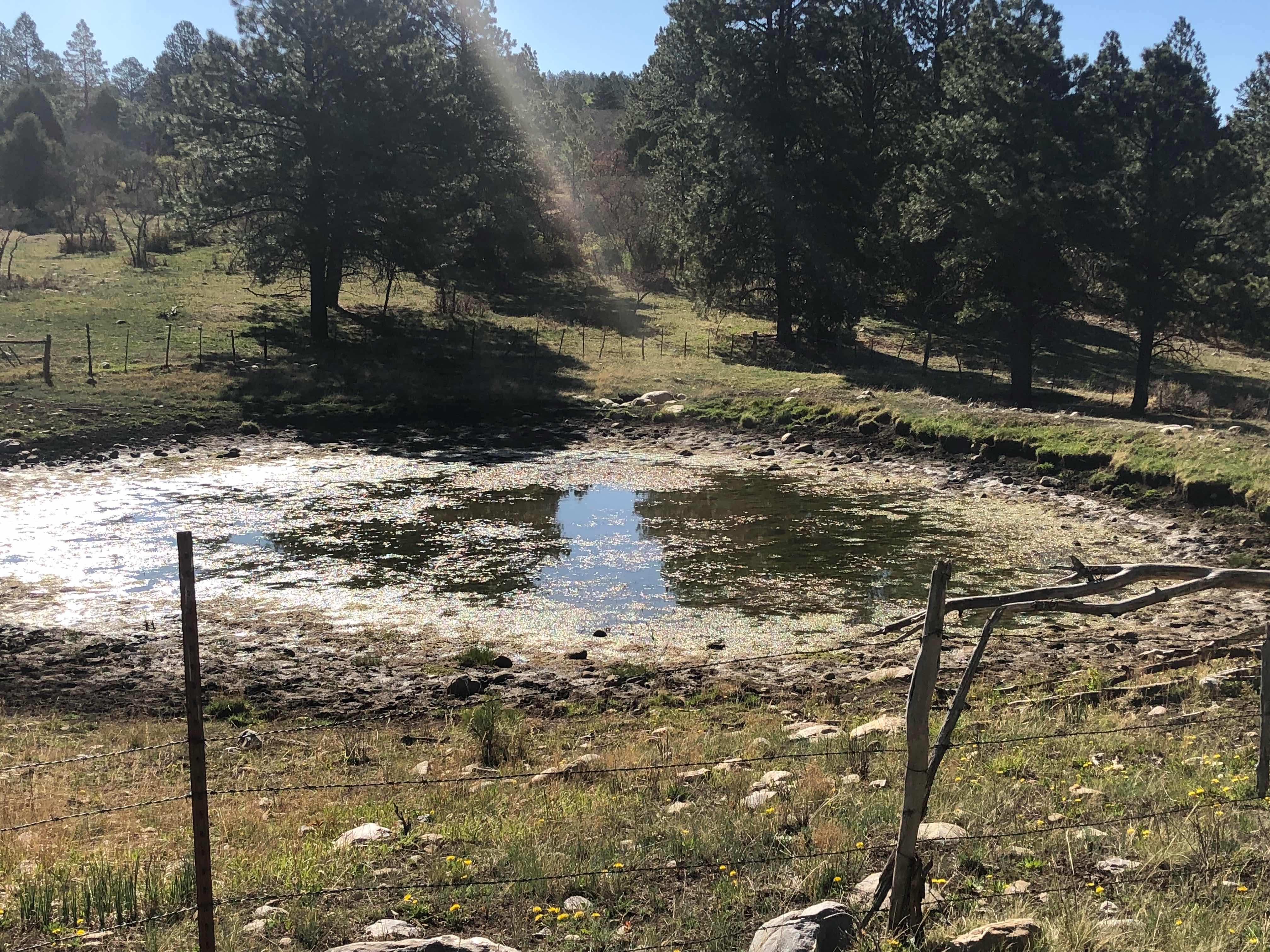 Not stopping for that 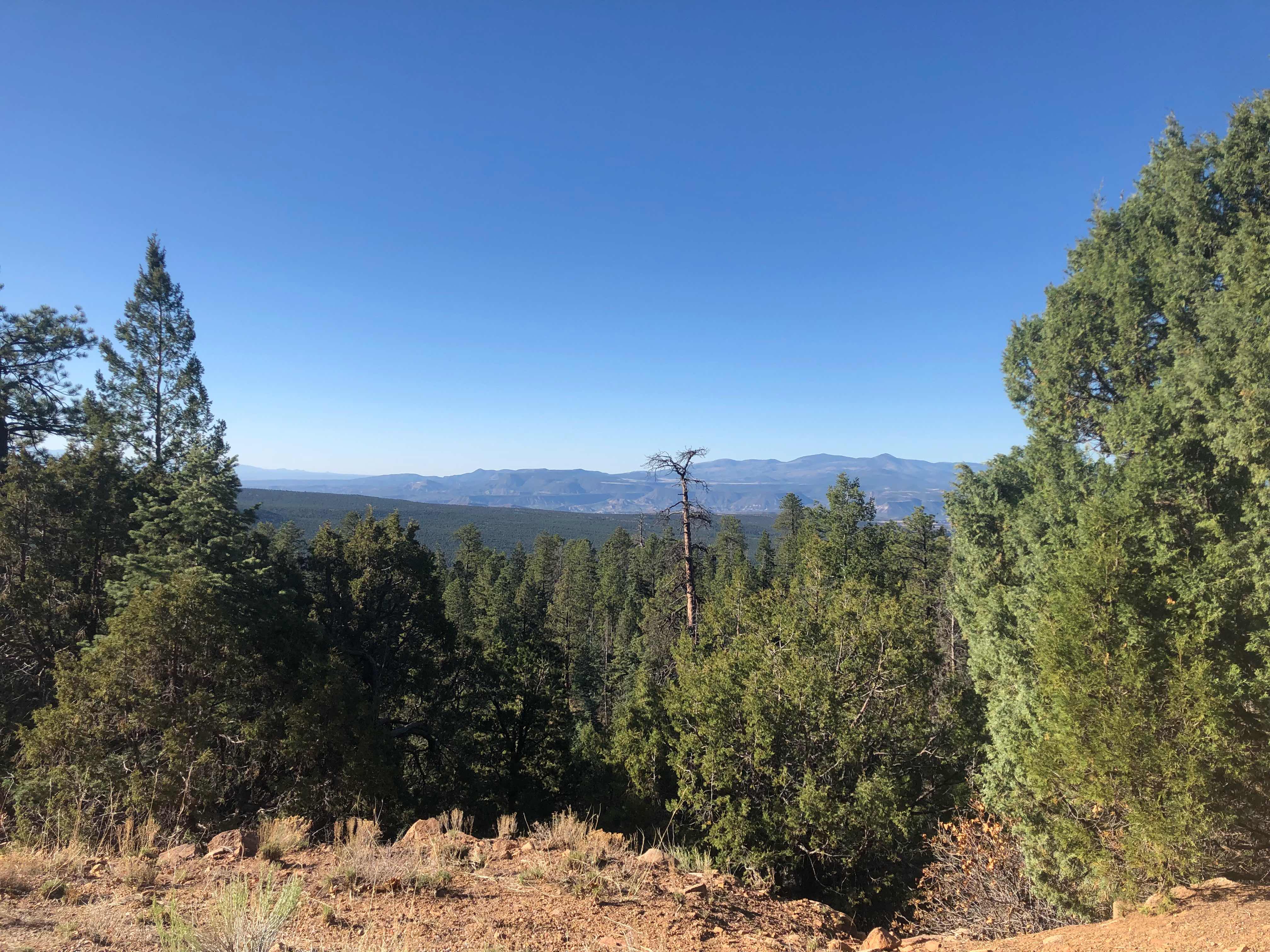 Pine trees and a view 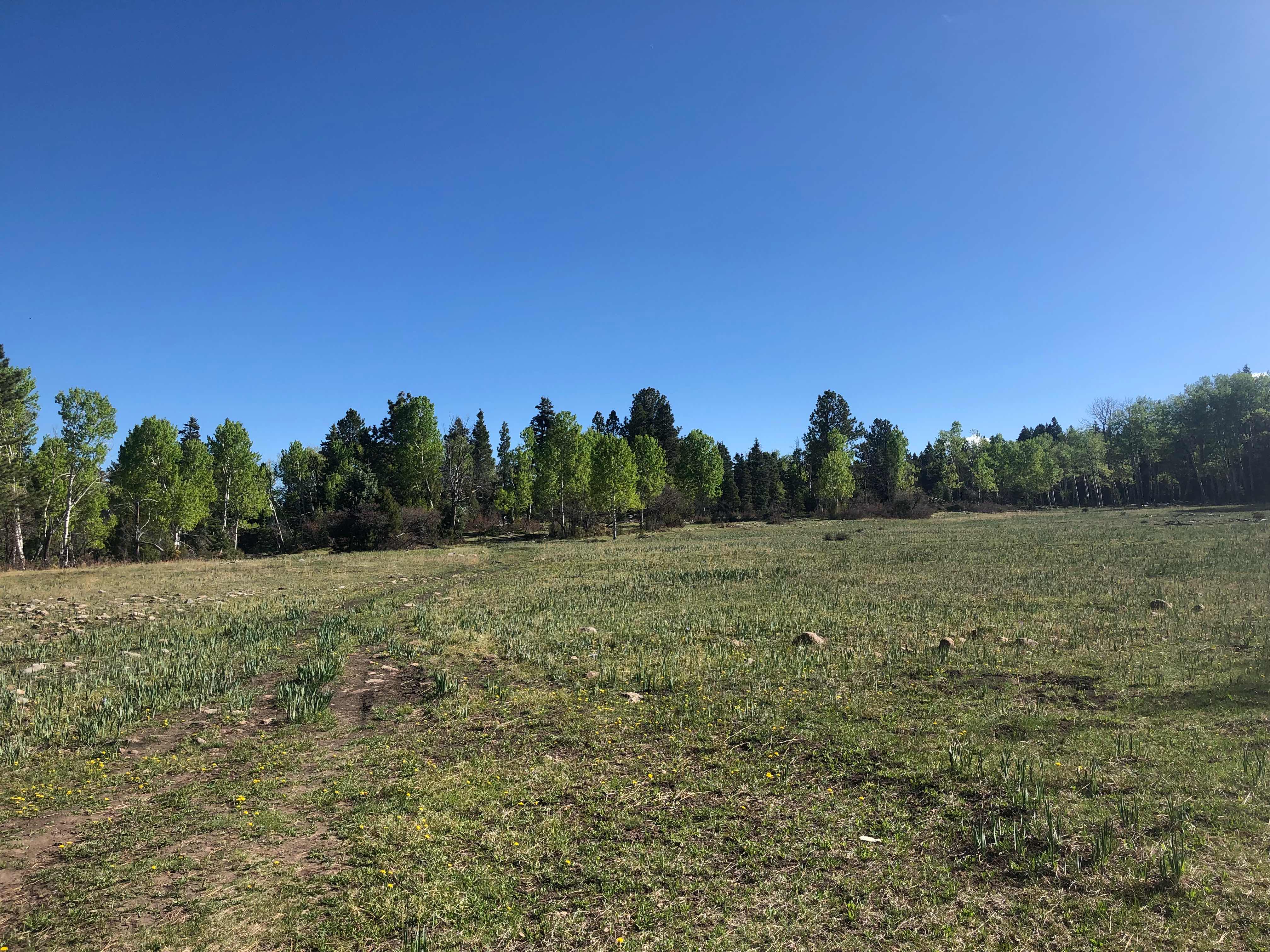 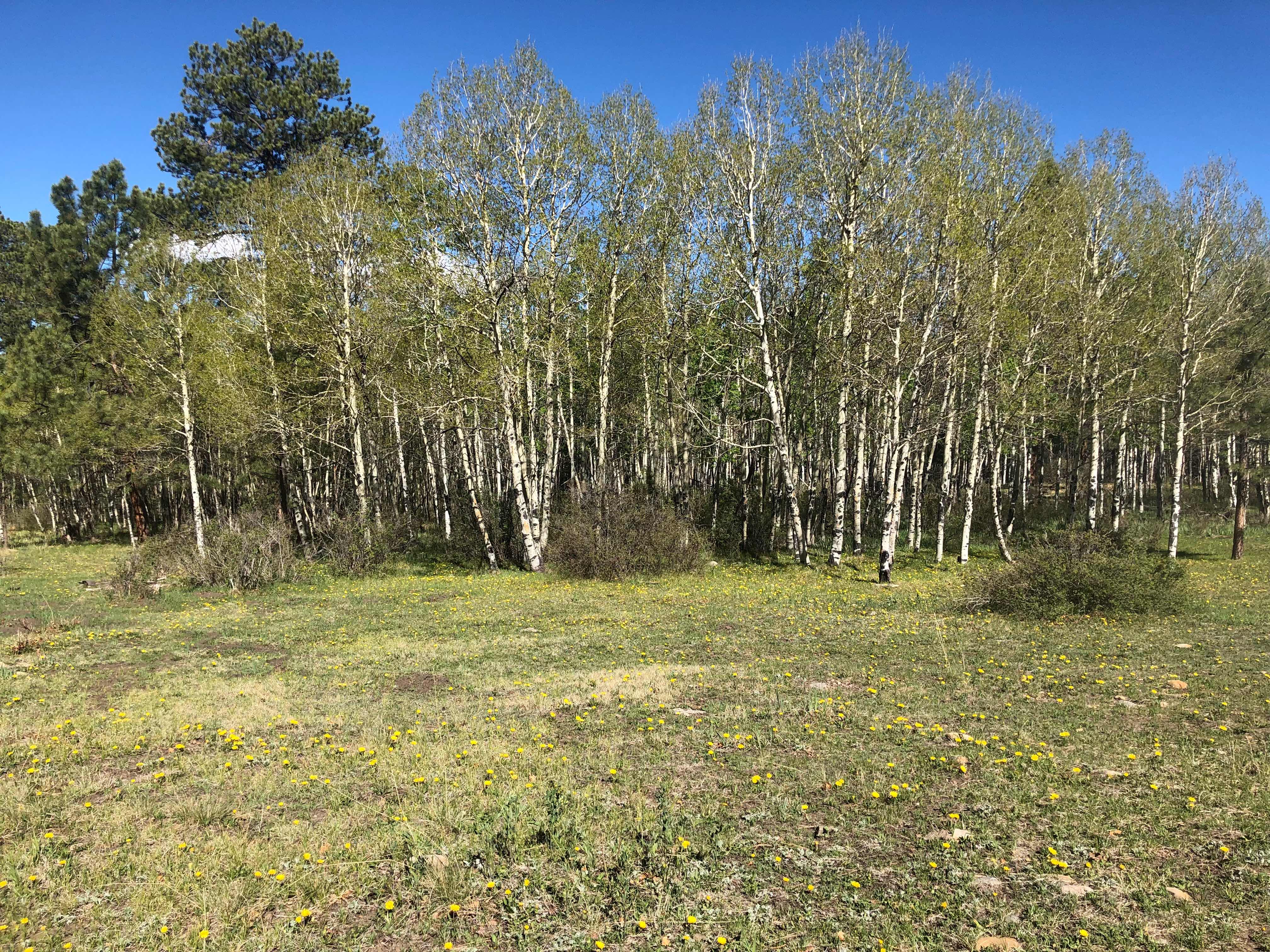 Aspen grove
Shortly after leaving Mangas the wheels fell off the bus, so to speak. The CDTC is working tirelessly to get the trail off of dirt roads and I appreciate the effort. The problem today was those routes aren’t complete. I would see a trail leaving the road and take it only to end up back on the road a few hundred feet farther down the trail. The marking was confusing as well. I was constantly having to check my gps app to see where I was supposed to go. There were also a lot of intersecting dirt roads and barely visible roads. With my heavy pack and lack of motivation I struggled to not lose my cool. I got off track several times throughout the day and had to bushwhack back to the trail. It made for a very tedious day. By noon I had done 14 miles, but after that I was rapidly fading. I definitely did not stick to my new hiking schedule of taking a break every two hours. I was breaking every hour. I’m sure most of my troubles were caused by my heavy pack and lack of energy. To make things more challenging I didn’t get out enough snacks from my food bag and was too stubborn to unpack my entire pack to get more out. I really wanted to enjoy today, it was a very pretty day, but I just couldn’t break out of my funk. So far I had managed not to have a meltdown and I thought that was a win. 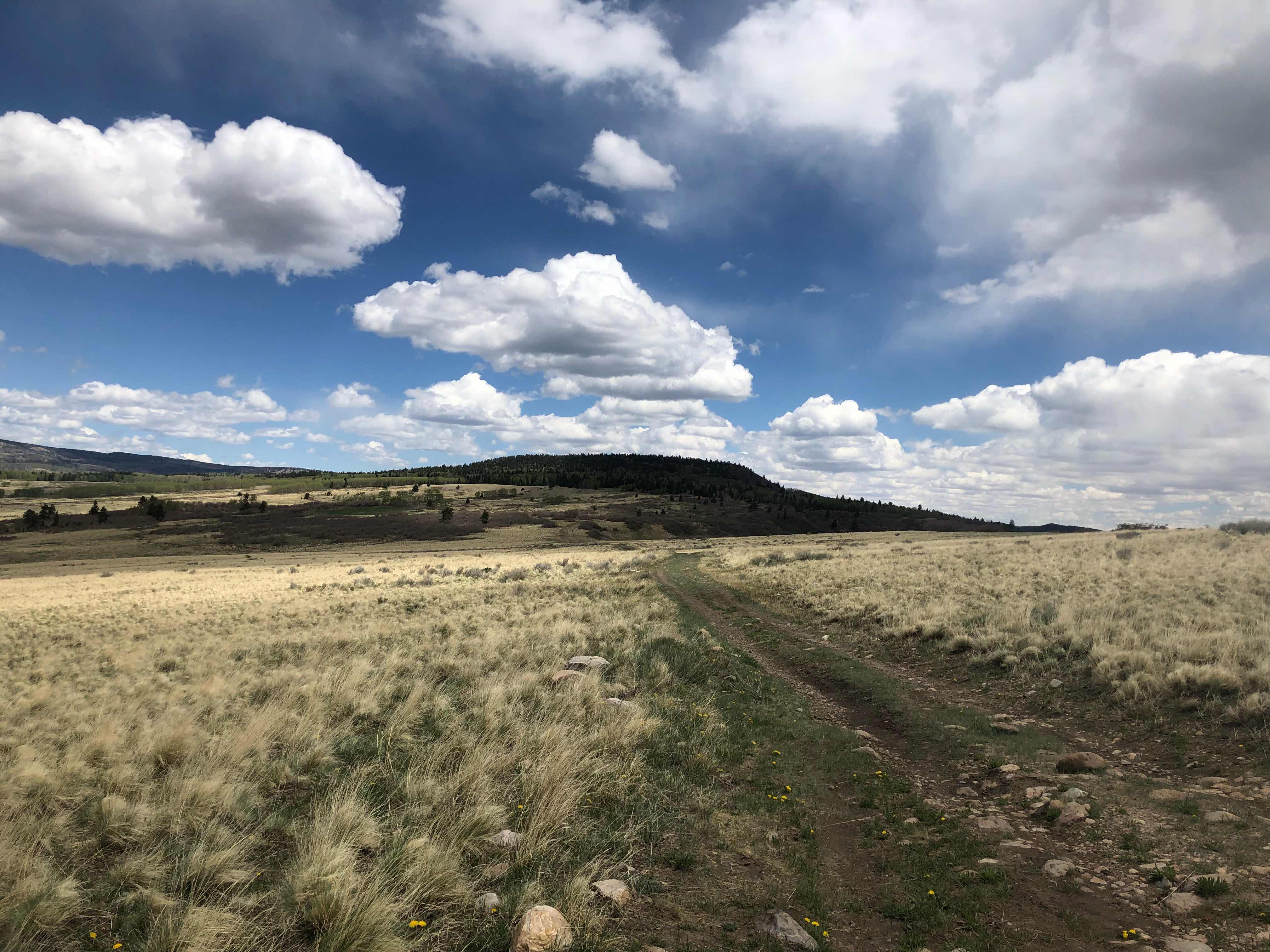 Cool and windy day
About mid afternoon we received a tiny bit of rain. So far any moisture that we have gotten hasn’t been enough to be a concern. Today was no different and I didn’t even bother digging out my rain gear. Just when I finally resigned myself to the fact that today was going to be slow going and to just embrace it. That was just before things got a lot worse. I had a decent little climb ahead and it was on trail not a road, I was stoked to bang it out. The trail gods had a different thought. I struggled up, over, and around downed beetle kill trees. Slow going fails miserably to describe the hell I was going through. 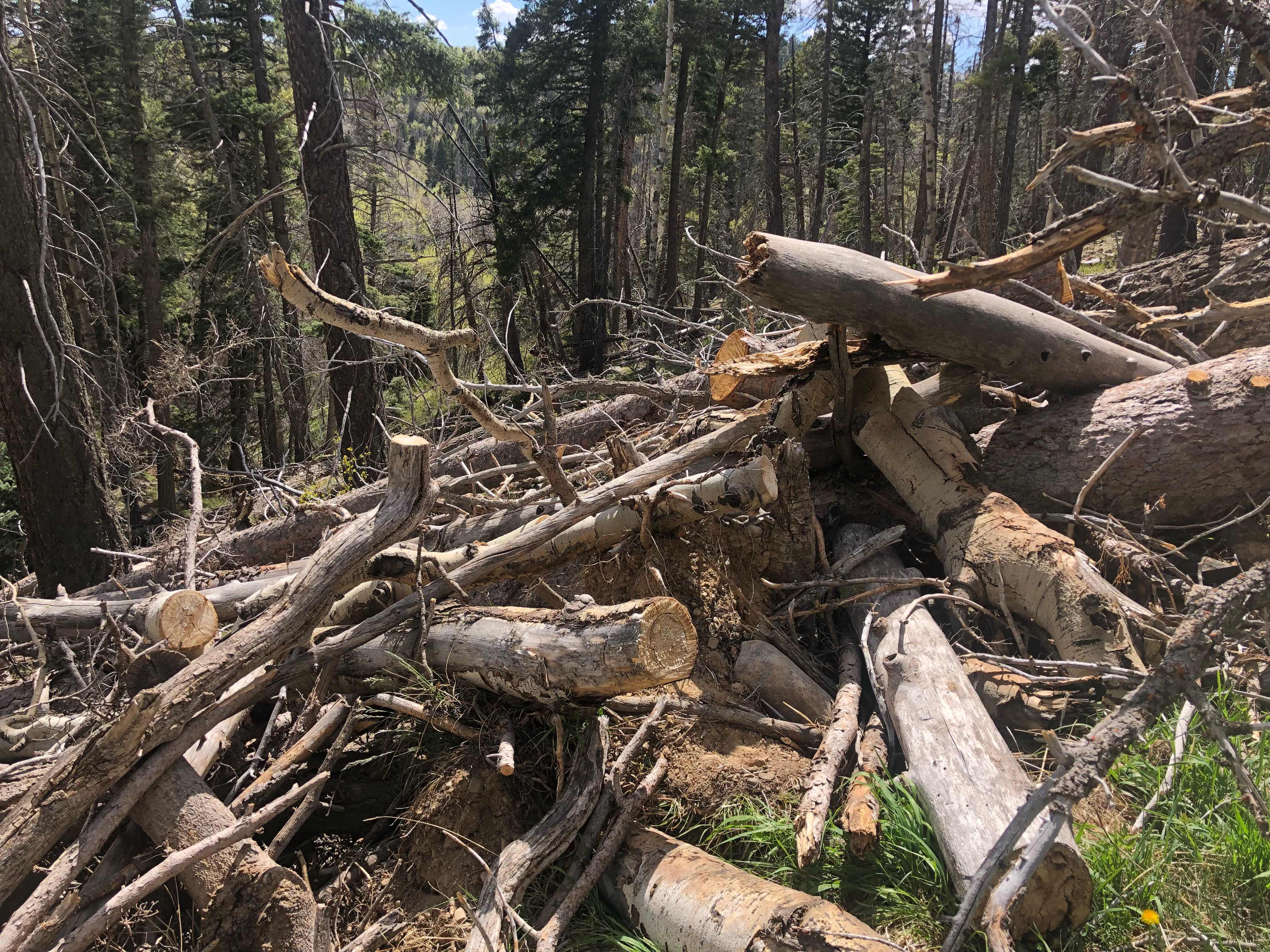 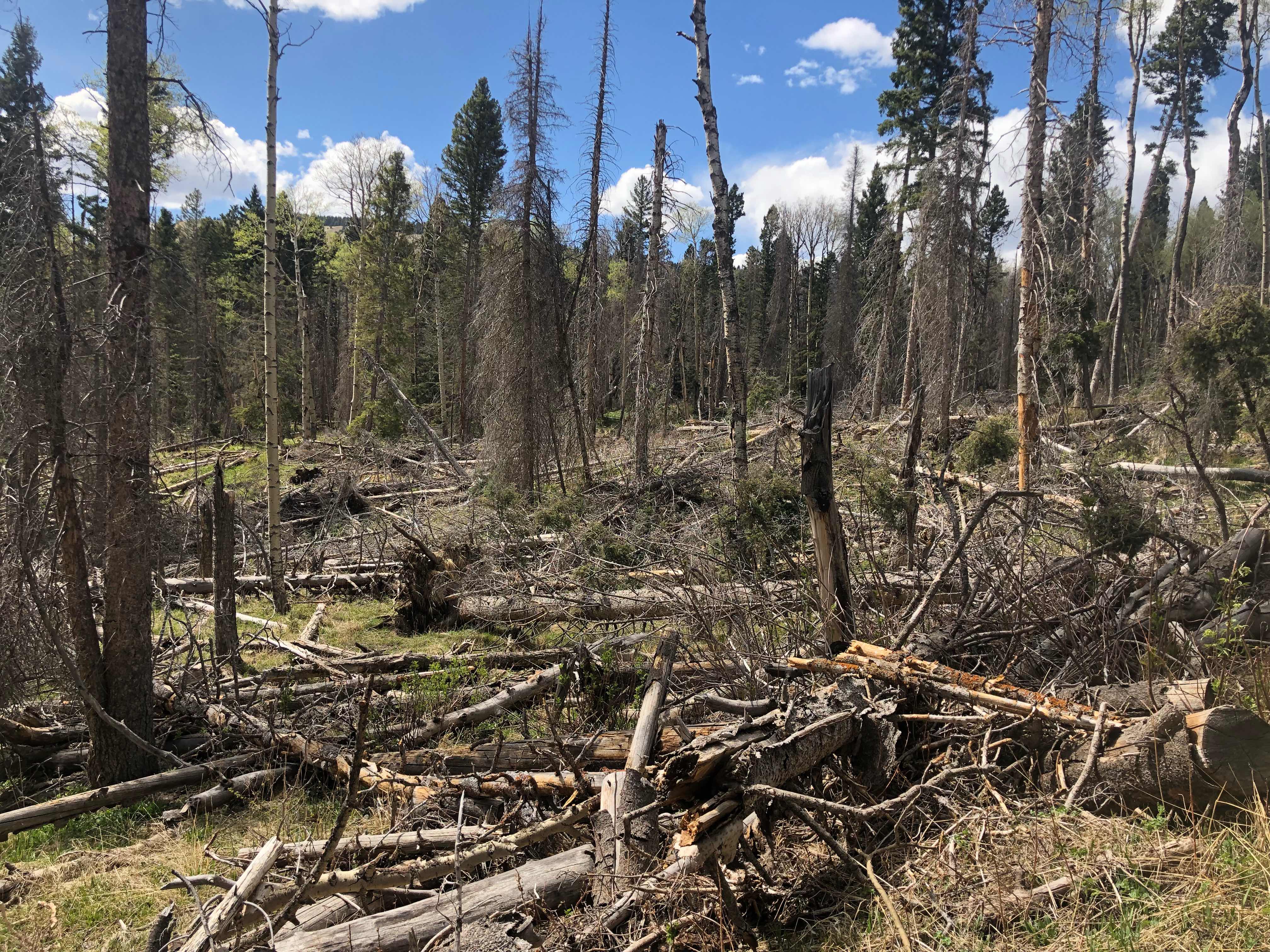 My life for a few uncomfortable hours
The one highlight of this area was that I saw 5 elk and a young moose. I’ve been dying to see a moose so that was enough to momentarily lift my spirits. He stayed within visual range for awhile, but I couldn’t get a good picture of him. Finally I broke away from the downed trees and continued to my next water source. With all my breaks today Mangas wasn’t very far behind me. I waited for him so we could either hike the last few hours of the day together or arrange a spot to camp together. We decided to hike at least 4 more miles before camping. I headed out just before him. As soon as I left I hit more beetle kill. The trail had been rerouted to avoid most of the downed trees. Once again it was very poorly marked and before I knew it I was off trail. This time however, I was massively off trail. I was following cairns and blazes, but something felt off. I think it was how steeply I climbed up a mountain that finally broke through my thick skull that this couldn’t be right. When I checked my app I was over 500 feet higher in elevation than I should have been and about half a mile off course. Instead of turning around I decided to bushwhack back to the trail. This was a lot harder than usual because I was so far above it and there were more downed trees and some large snowy areas. I ended up postholing(when your foot breaks through the snow and you sink into it) for a little while. I wasn’t exactly lost, but I wasn’t sure the best way to get back on trail. Eventually I gave up on trying to run a diagonal route and intercept it farther along and just went straight down towards it. I lost about 30 min, lots of energy, and my patience. I guess it was bound to happen eventually, but I had a spectacular meltdown. I yelled at a few unsuspecting trees and kicked a lot of mud. Mangas had gotten ahead of me and when I finally caught up I told him the story. He really got a good laugh out of it and for some reason that made me feel better instead of worse. 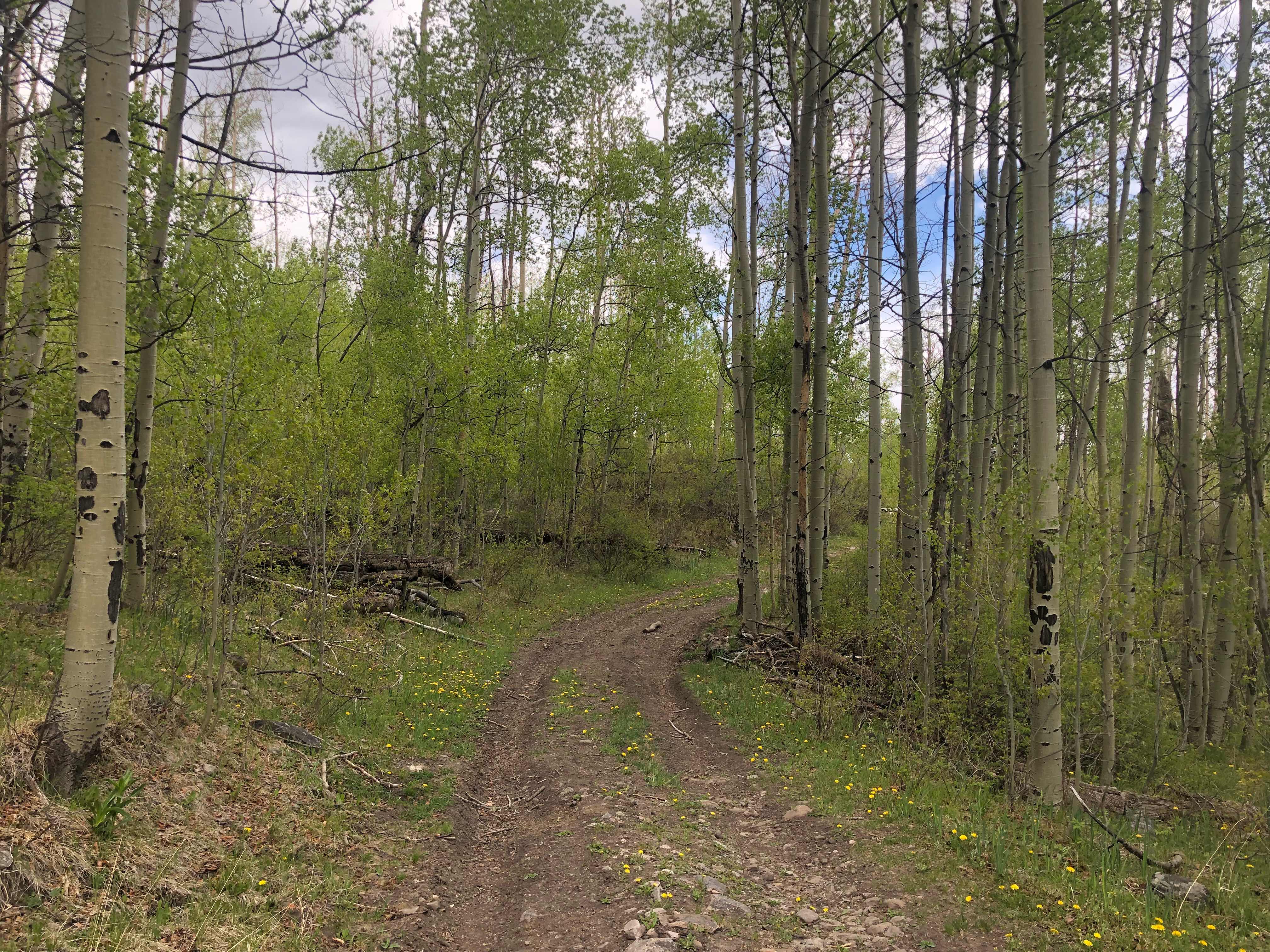 Another nice aspen grove
We made camp about a mile earlier than planned. The wind was really picking up, we were both tired and struggling, and we just wanted to be done for the day. From now on I’ll be posting the elevation of my camp at the top of the blog. It is really starting to feel like I’m hiking the Continental Divide. Up until this point it hasn’t really felt that way. I imagine a lot of my camps from now on will be pretty close to 10,000 feet. I’ve gotten back into the habit of cowboy camping again, but it is too cold for that tonight. Here is hoping that tomorrow will be a better day. At least my pack will be a little but lighter after the dinner I had tonight.
“It’s a dangerous road, Frodo, going out your door. You step onto the road, and if you don’t keep your feet, there’s no knowing where you might be swept off to.”
- J. R. R. Tolkien