Day 36- The One Where I Fell Into a Frozen Lake

I’m not really sure what to feel about how today went. I’m exhausted and extremely frustrated. Today started off pretty well. I slept warmly and was up at 5:15. We really wanted to get an early start so we could make more miles. Also by starting earlier we had less chance of postholing because the snow would be more solid. It was hard to get out of my sleeping bag. My socks and shoes were completely frozen. It reminded me of hiking in the Smokies on the AT. It is not a fun way to start the day. We began the hike by climbing straight up a snowfield for a couple hundred feet. Once atop said snowfield we realized that we were off trail and had to climb back down. Navigation in the snow is not an easy task. 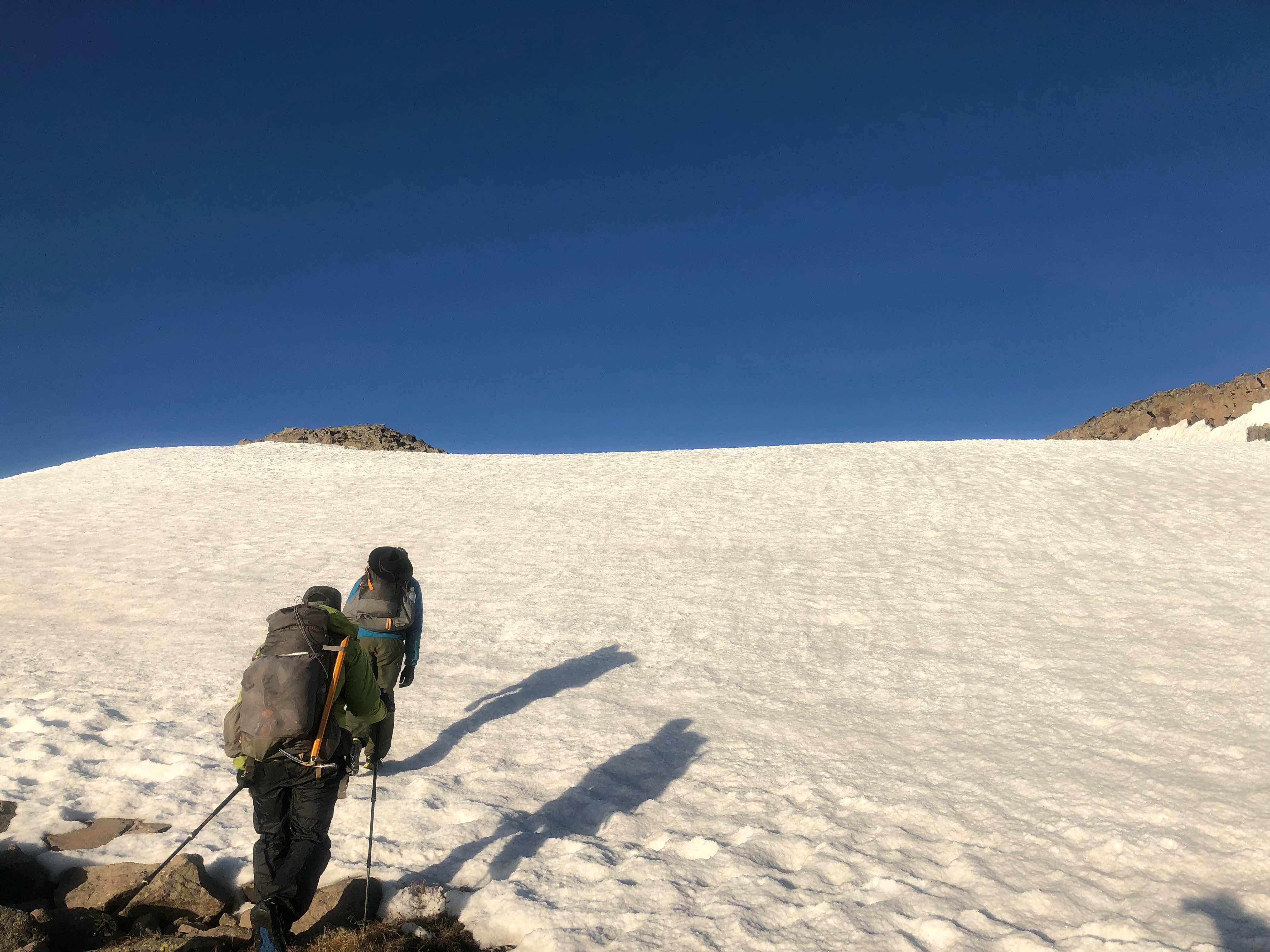 At least we’re warmed up quickly 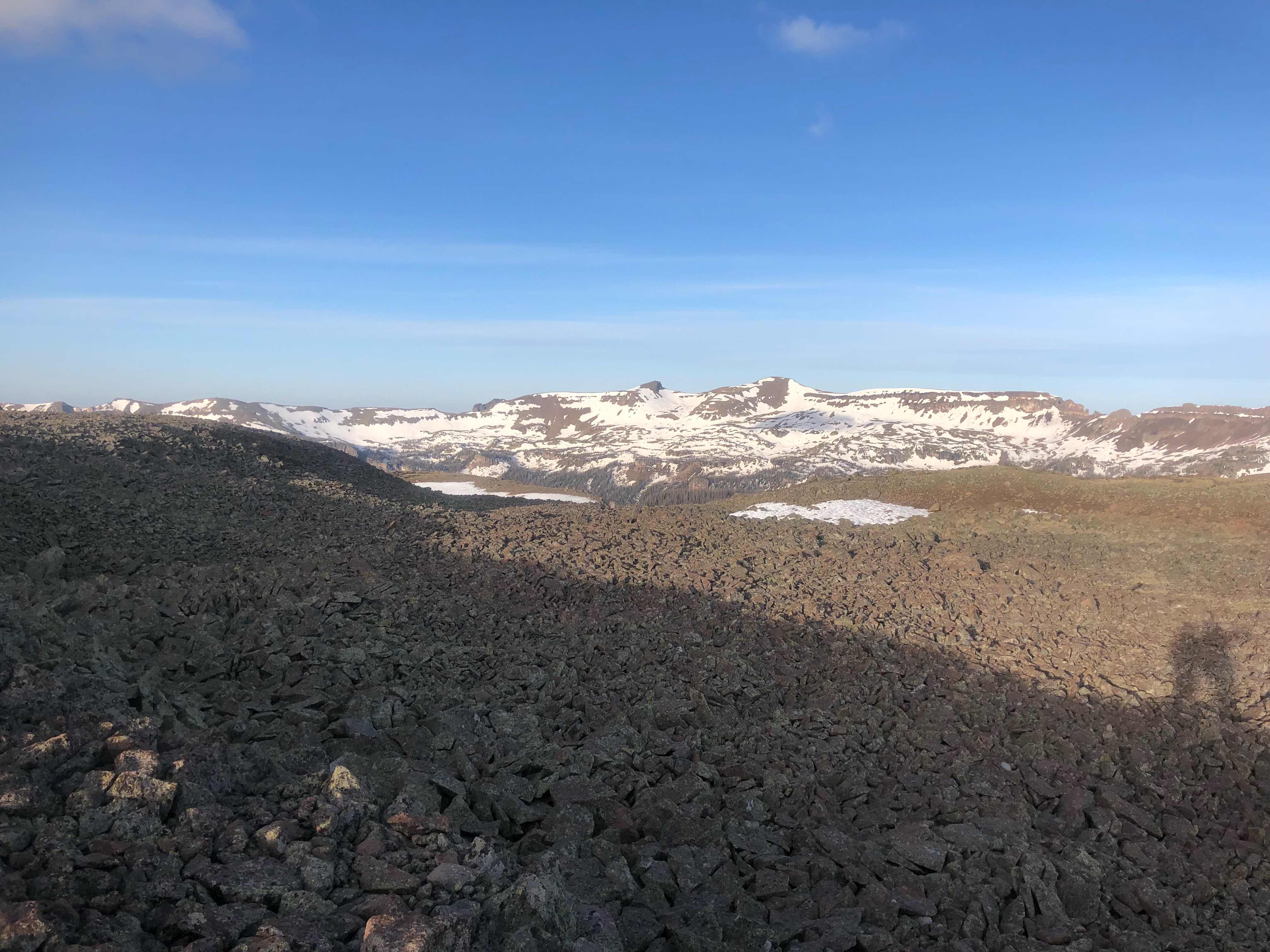 Boulder scramble at the top of the snowfield. Notice Turtle and Mangas’s shadows. They were trying to figure out where we needed to go
Eventually we hit our stride and had an easy mile or two. By easy I mean we were not postholing and the trail wasn’t covered with snow. That didn’t last long and might have been the only easy part to the day. Postholing is absolutely exhausting. I did more today than on the entire PCT. I’ve read about how hard the snow conditions in the San Juan’s can be, but reading about it and experiencing it are two different animals. The snow is like mashed potatoes. Some times it is deep enough to hold your weight and other times you’ll sink in to your hip. Sinking in to your ankle is irritating. Sinking into your knee is tough. When you sink in to your hip it is hard to pull yourself out again. Anytime we crossed a snowfield it wasn’t a matter of if you would posthole, but when. I equated it to a children’s Jack in the Box toy. I would wait with baited breath to fall through the crust yet again. It took us over 2 hrs this morning to go 2 miles. That was the easy part of the day when we knew where the trail was going. It always takes me a few days to readjust my expectations for miles. Just 3 days ago I was easily doing 27 miles per day. Today was only 14 miles, but it took all day. I really tried to be positive and enjoy the scenery, but I came up short. At least the trail hasn’t been dangerous. I haven’t felt sketched out for the most part. Today definitely had a few scary moments, but nothing that could have resulted in my death. 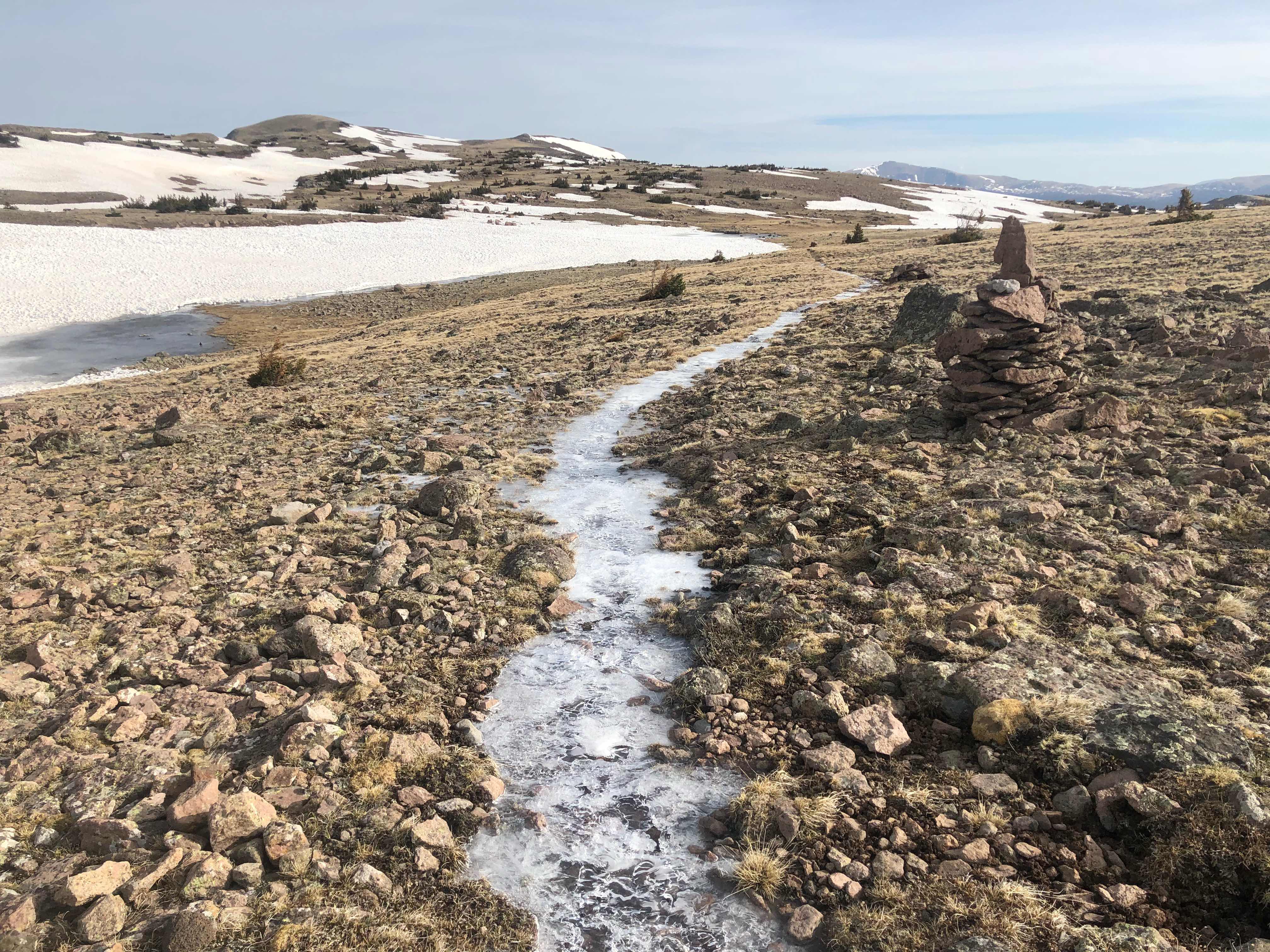 Yup that frozen stream was the trail 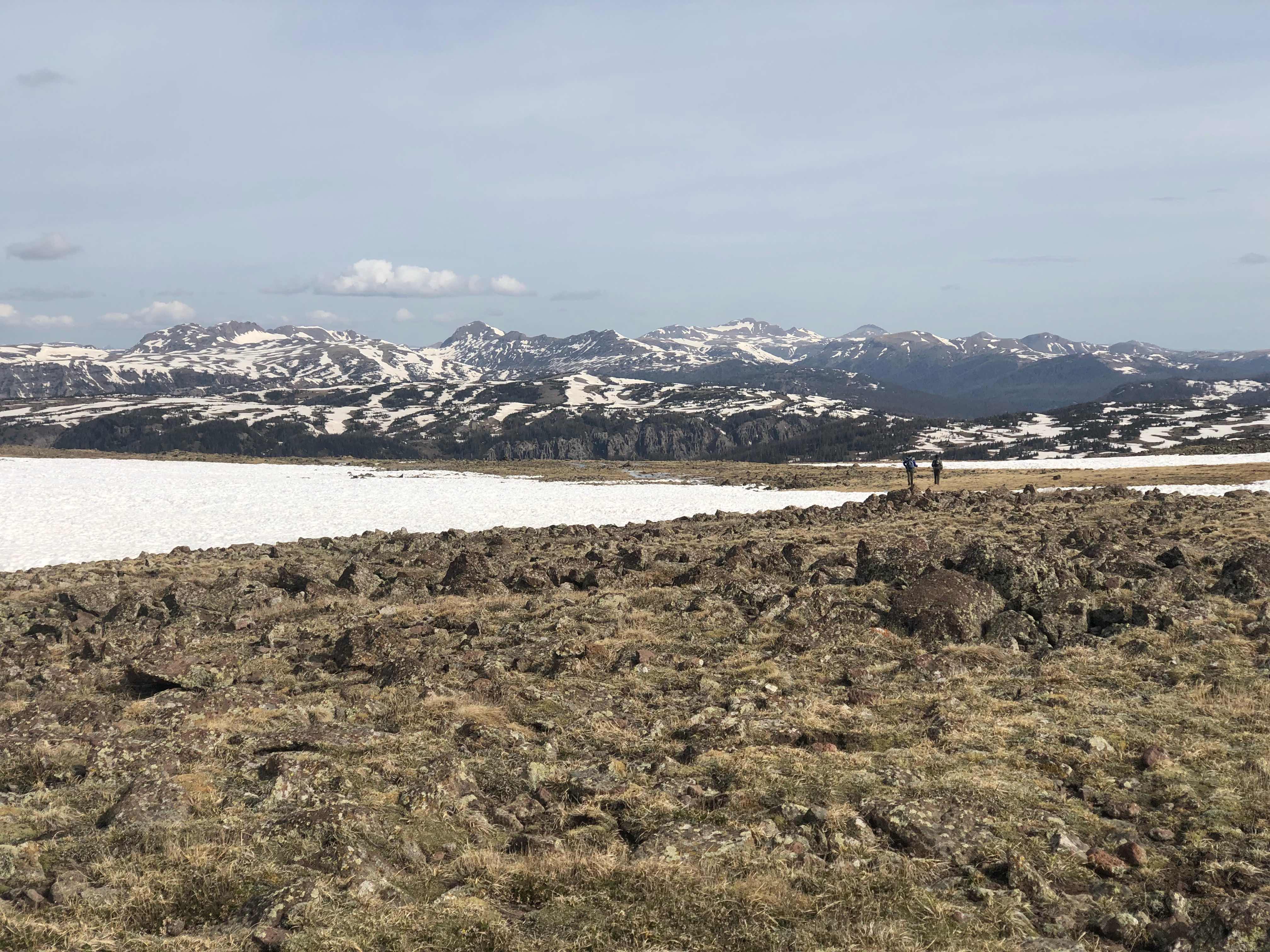 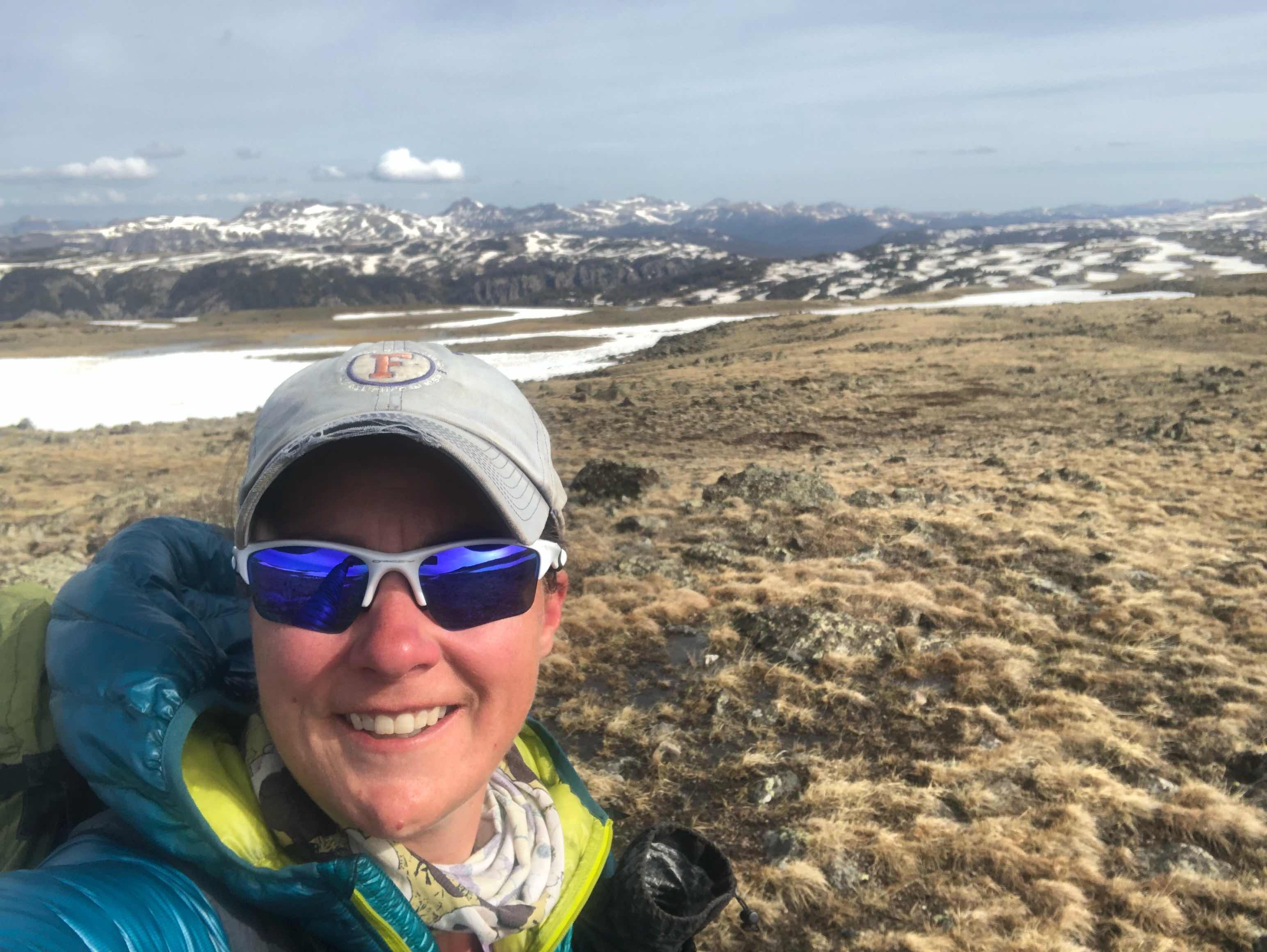 At one point I was still capable of smiling
The day really took a turn for the worse in the afternoon. The day had warmed up sufficiently enough to guarantee postholing. We found ourselves offtrail and tried to bushwhack back using the shire of a big lake. By the time we realized we couldn’t walk the shoreline it was almost too late. We tried to climb back up a steep bank through the forest. I took one bad step and slide down the slope and into the lake. My shoes were already soaked from the postholing, but now I was drenched up to my hips. To make things even better a storm was obviously moving towards us. We took a small break to collect ourselves before moving on. The guys were really nice and offered me extra layers to put on, but I didn’t want to get those wet before camp. I wrapped myself in my tyvek groundsheet and surprisingly stayed warm enough. Just as we were getting ready to start hiking again it began to snow. All I could do was laugh at this point. It was either that or cry and I don’t usually cry on trail. 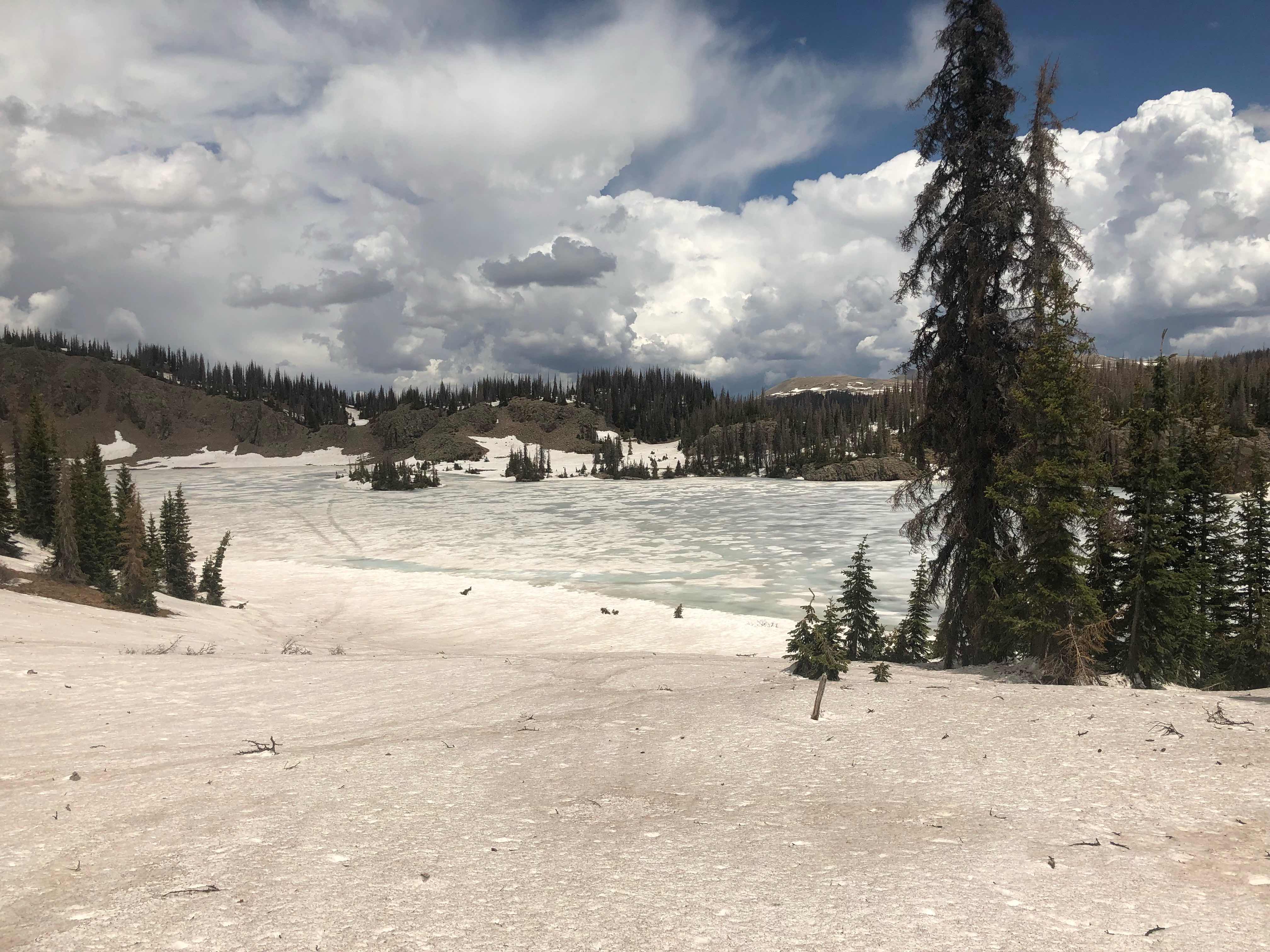 Frozen lake I took a dip in 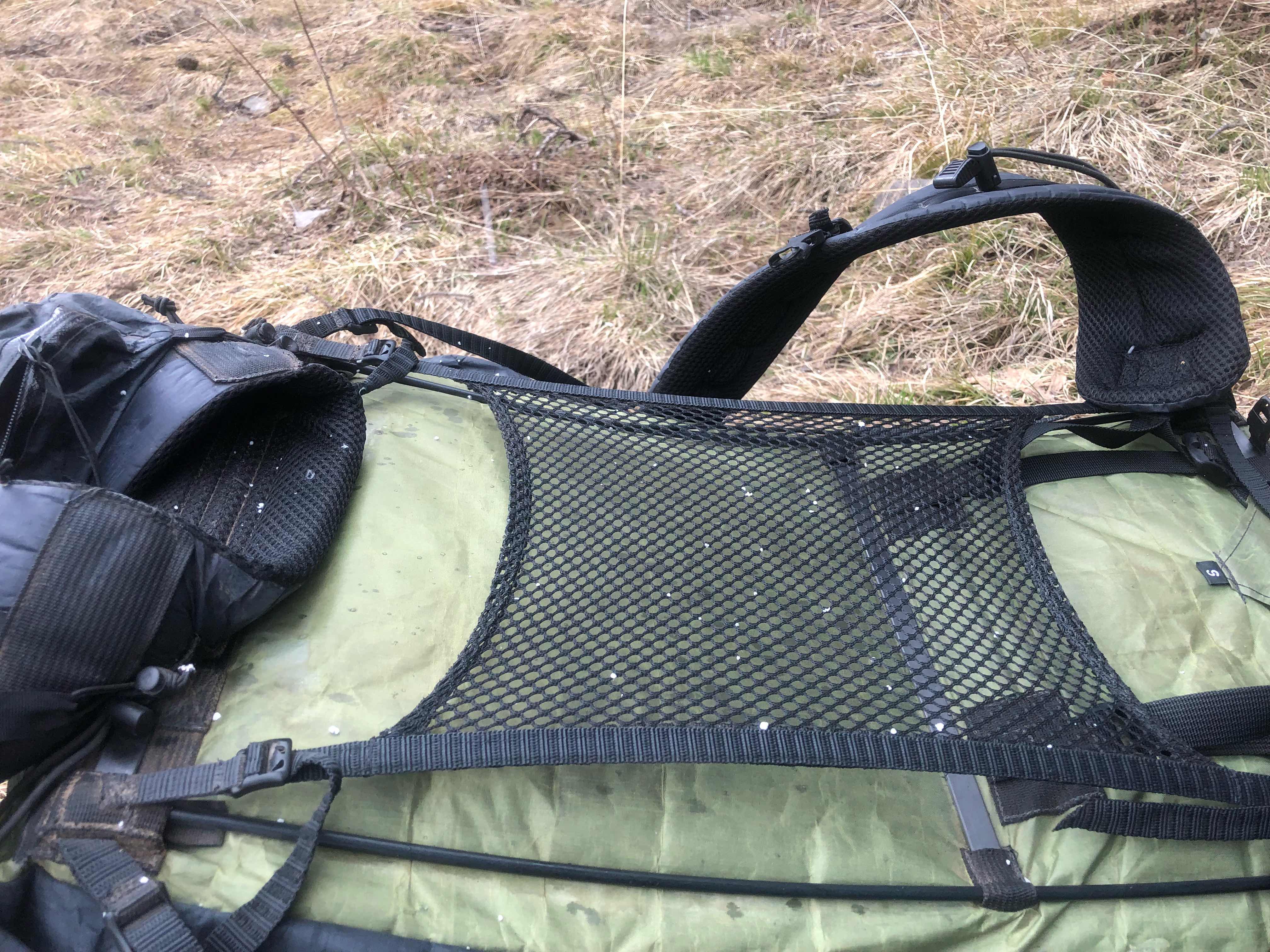 Beginning of a very light dusting of snow
I actually was glad it was snowing. Rain would have been a million times worse. It was a very light dusting and didn’t make me any wetter. We really wanted to make more miles tonight, but the terrain didn’t cooperate. We took a bad route and climbed a few extra hundred feet then had to get back down safely to the trail. Once that was done we had to traverse a steep ridge line. Once again things didn’t look good for camping so as soon as we saw a decent spot we stopped for the night. Everyone was exhausted and that is when mistakes happen. I’m disappointed with our miles today, but everyone is alive and healthy and that is all that matters. We have been surrounded by water so nobody thought to fill up their bottles. We all ended up at camp with zero water and nowhere to collect from. The only choice we had was to melt snow. It was a time consuming process and uses up a lot of fuel. Tomorrow promises to be another really difficult day. Not only is the terrain getting harder, but a front has moved in. The high is only 38 degrees and there is a 40% chance of snow. Yup, I’m definitely embracing the brutality. 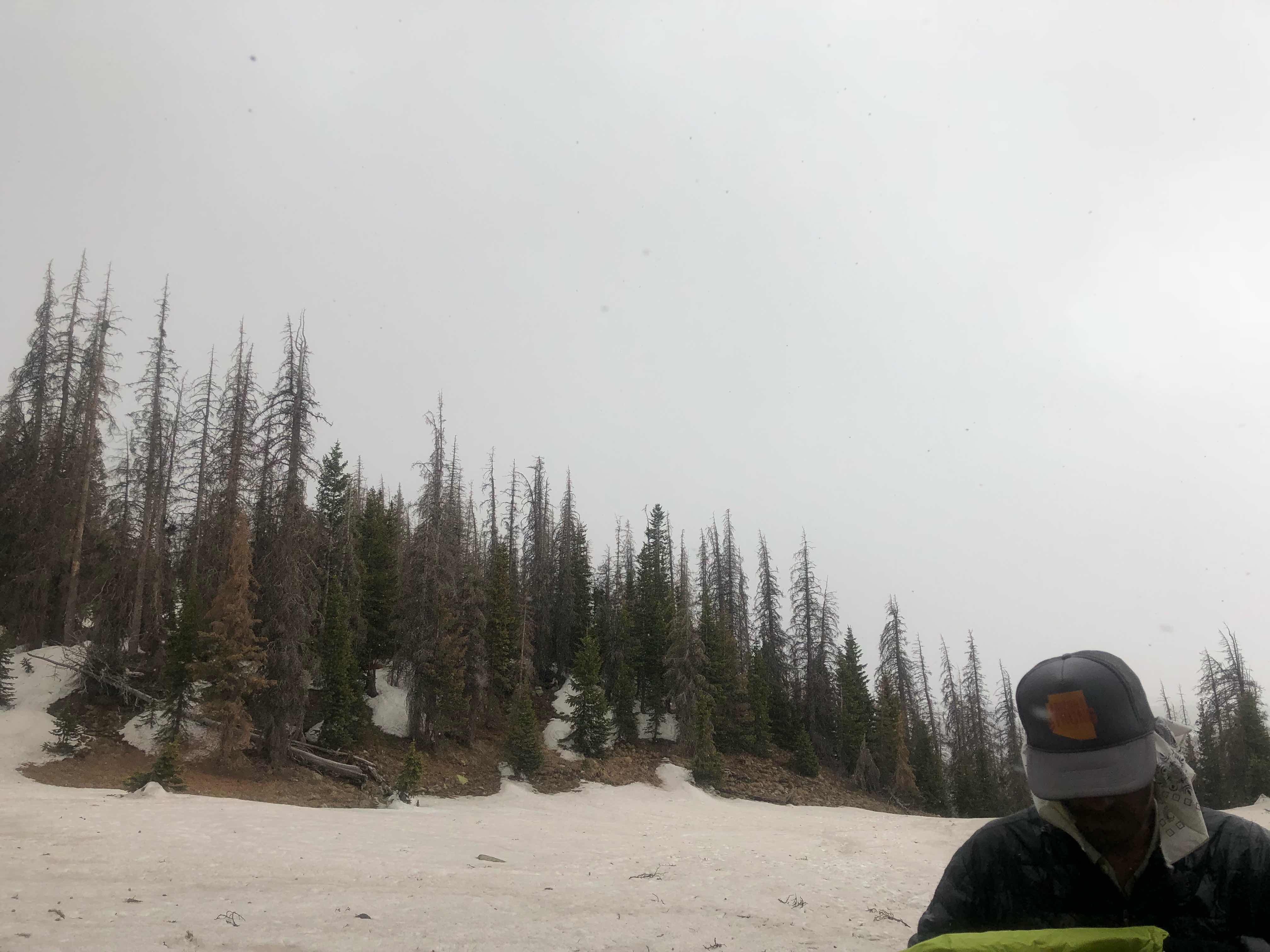 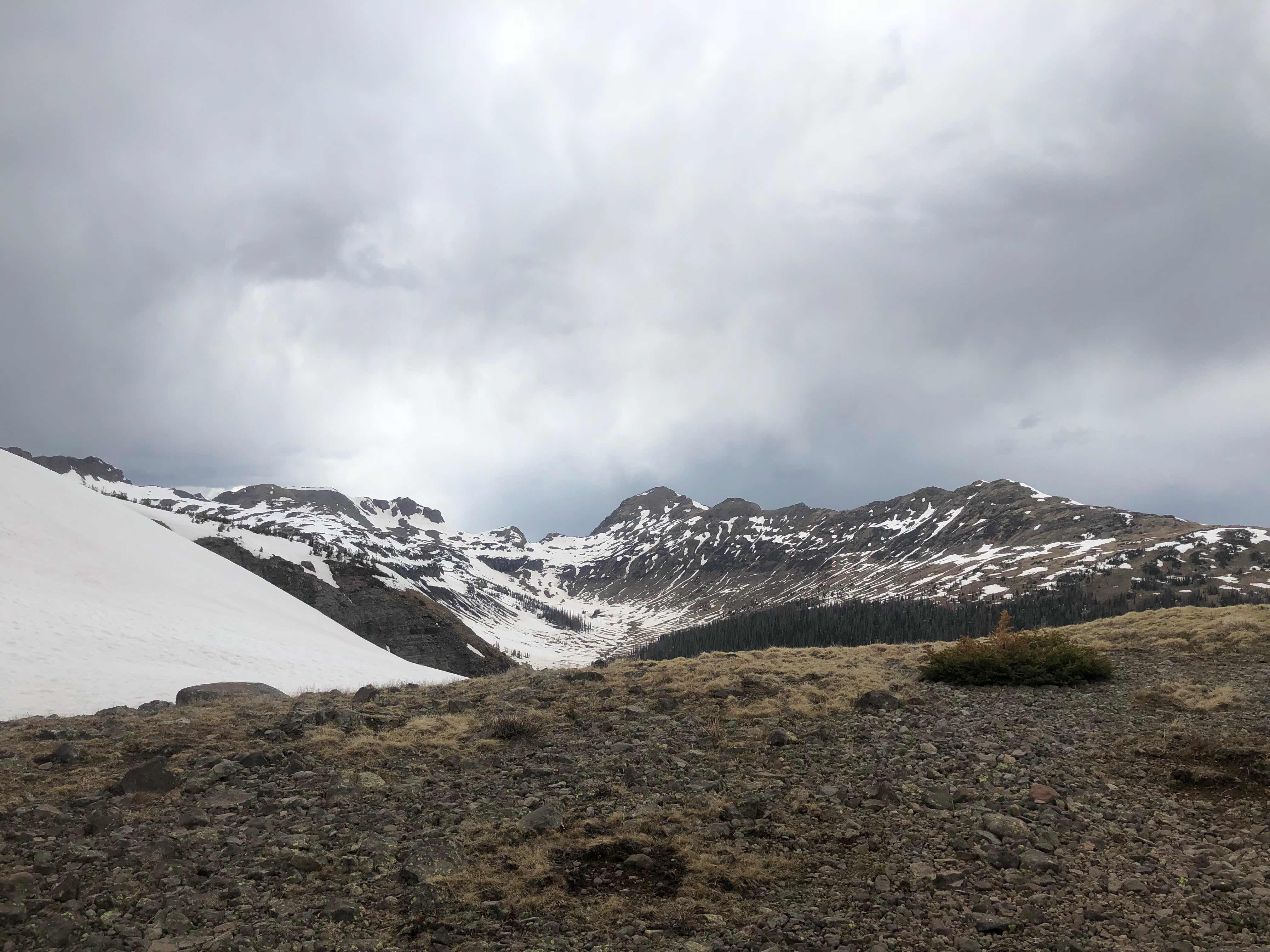 At least it is pretty 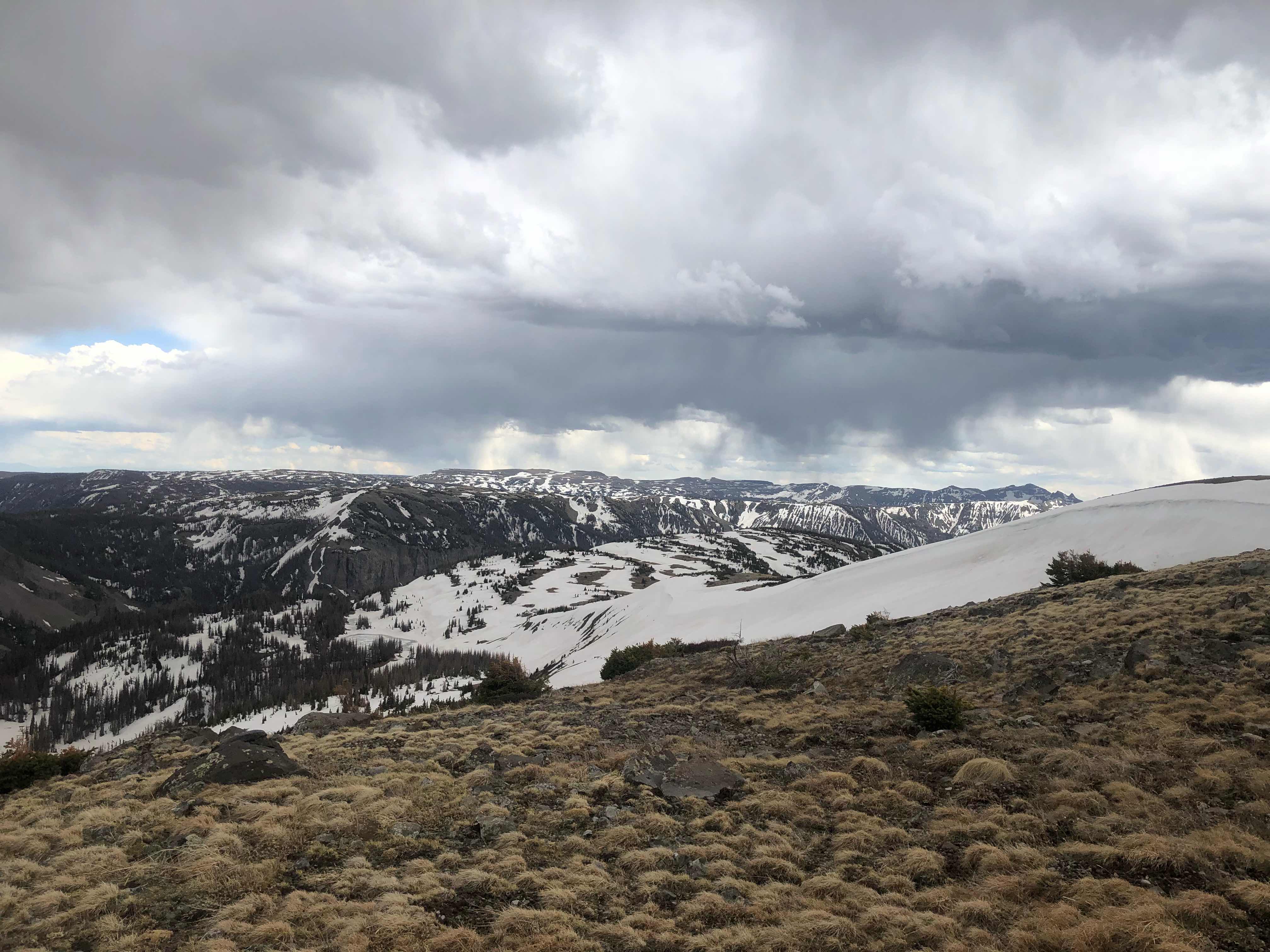 Wishing it was summer 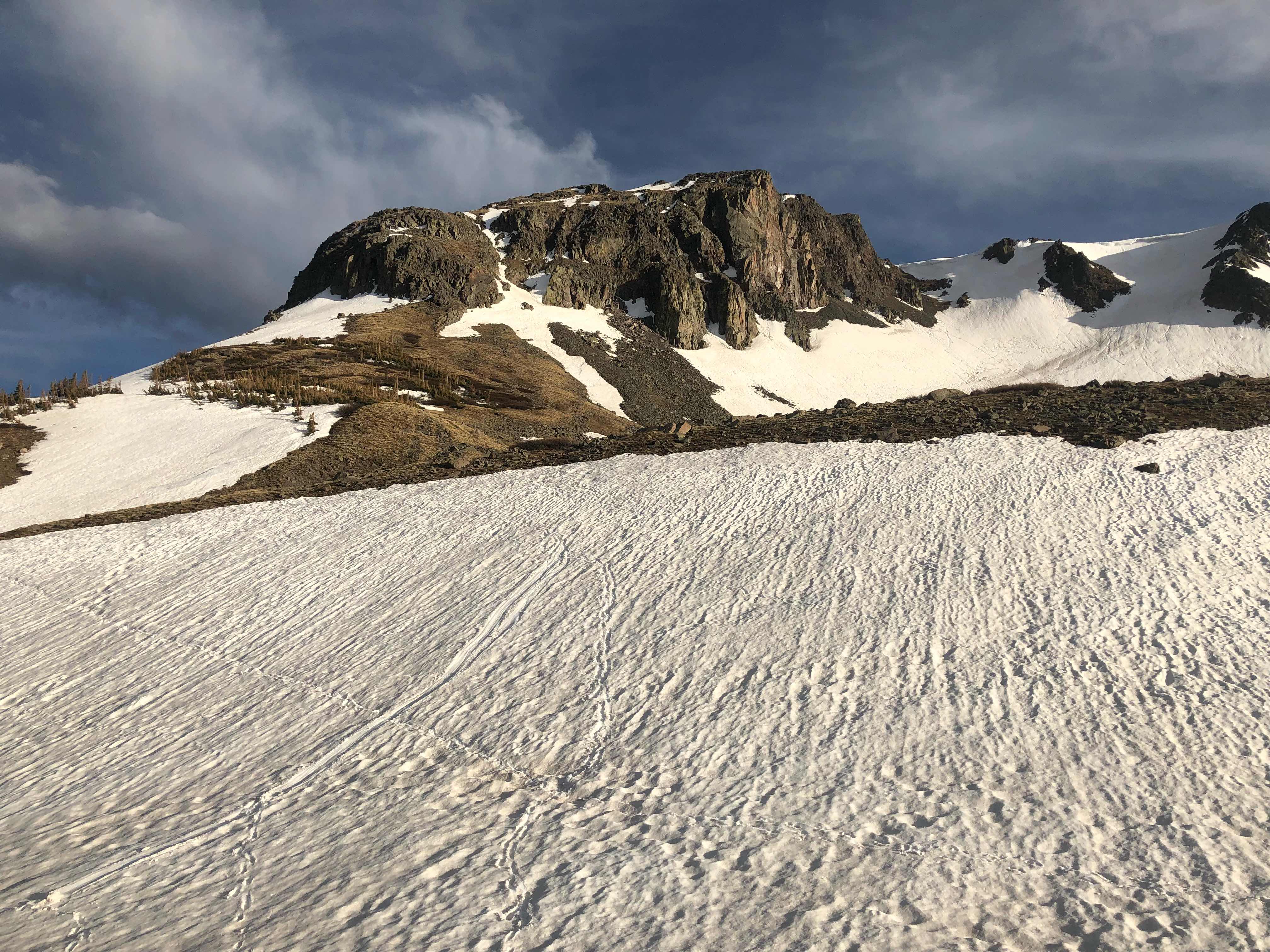 View from camp. You can see our glissade tracks 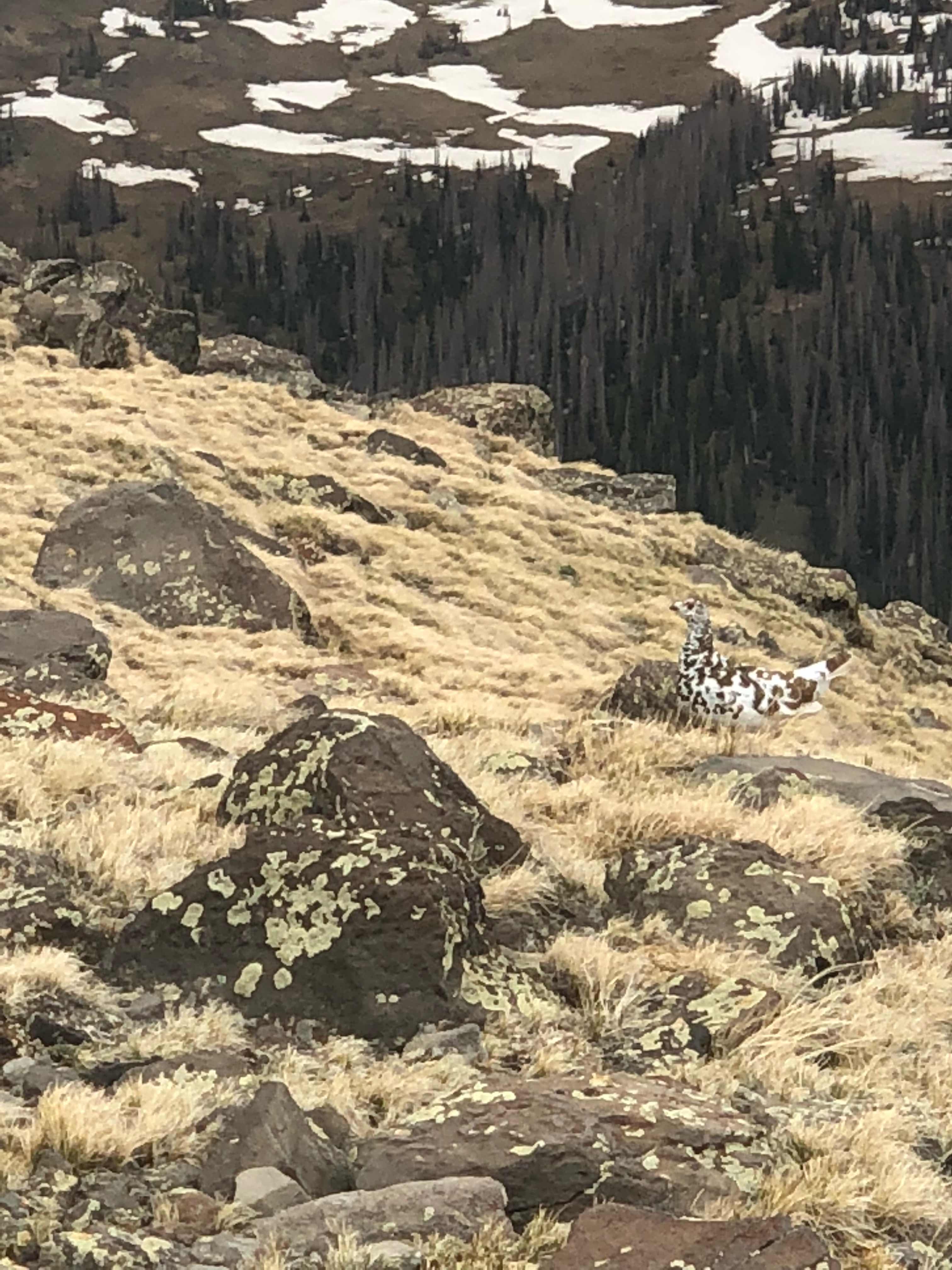 Do you see the Ptarmigan?
“The world breaks everyone and afterward many are strong at the broken places.”
- Ernest Hemingway