Day 38- Throwing In The Towel

Yesterday was undoubtedly my worst day ever on trail. I got to the point where I seriously considered pushing the SOS button on my personal locator beacon. While in the middle of a snow storm that featured thunder and lightening and contemplating crossing the scariest thing I had ever seen I was nearly in tears. We managed to find a safe route down, but the snow turned to freezing rain. We had gone less than 7 miles in over 9 hours. I was absolutely at an all time low. While laying in bed last night with all of my gear wet I was looking at another 3 difficult days ahead of me. To make matters even worse I only had food for 1.25 days. Once again I thought about calling for rescue. I knew I would never do it unless I was in mortal danger, but I fantasized. Eventually I decided to study my maps and find a way out. I didn’t care how I did it, but I knew that I couldn’t last another 3 days in these conditions. Before falling asleep I had a tentative plan, but I wasn’t sure it was feasible. I needed Mangas and his expert route finding skills to take a look. When we packed up in the morning I asked him and Turtle if they looked at their maps and saw another way out. Turtle hadn’t looked and Mangas hadn’t seen anything. I tried to present my idea, but it was not very warmly received. Mangas was pretty sure that we only had one sketchy area to go through today and then we would be fine. I let it go at the time. My alternate route wasn’t viable until we hiked farther.
The day started out below freezing and with everything soaking wet it wasn’t a pleasant start. At the beginning of the hike my body felt like it had already hiked 20 miles. I think we got about 1-2 inches of snow yesterday. When it was raining on us yesterday I cursed the heavens. The fresh powder ended up being a miracle. It was a super sticky snow that really gripped every step. A few of the scary things we had to do early on seemed relatively easy. The 1,500 foot climb wasn’t too bad, but I don’t mind climbing uphill. The boys didn’t seem very happy about it. 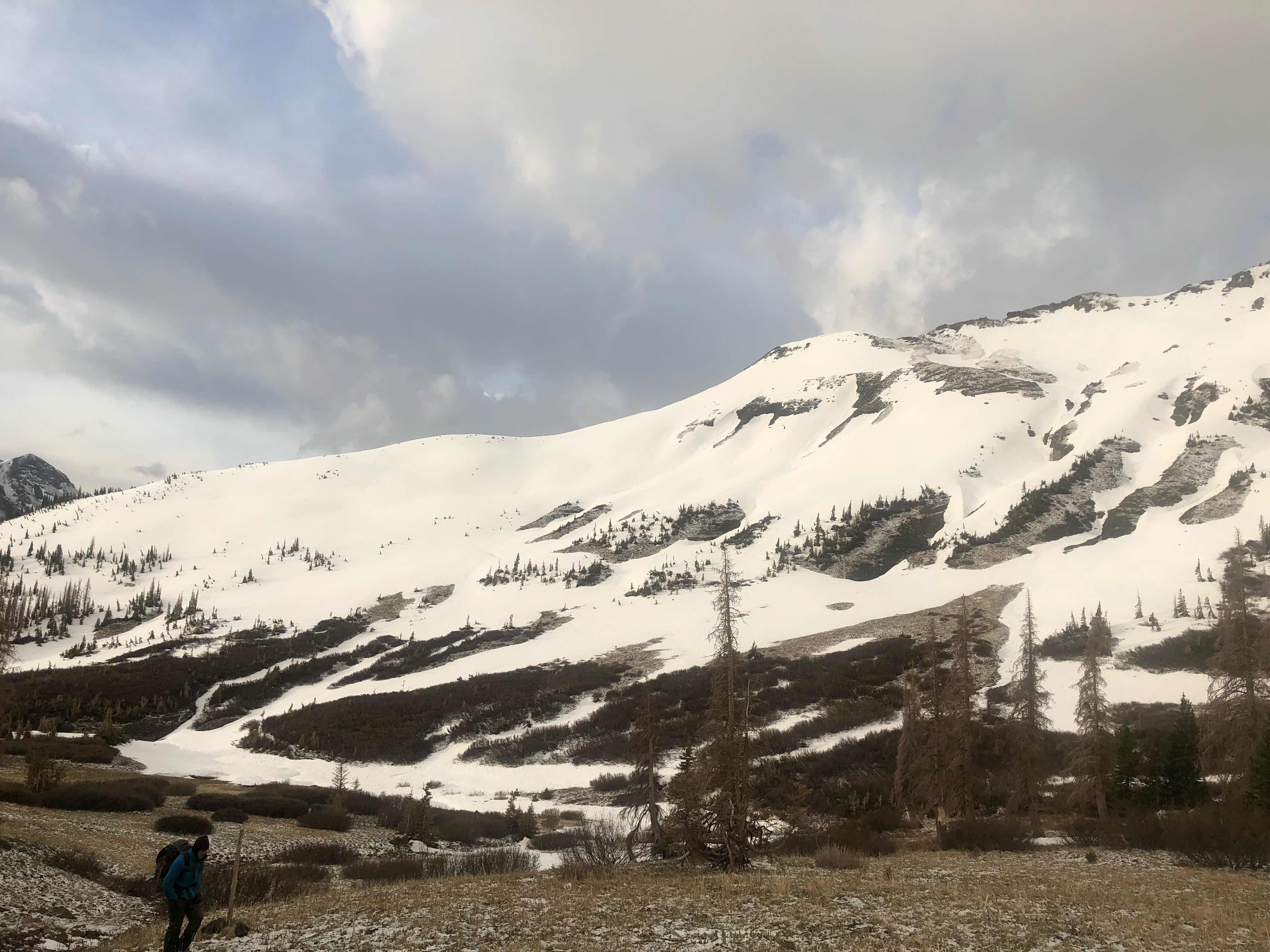 Early morning light on the ridge of certain death
Once we got to the top of the ridge it flattened out like the top of a Mesa. It was the easiest hiking I’ve had in awhile. That is if you don’t count the cold, freezing wind, and periodic snowfall. For some reason I decided to check on cell service and was shocked to have 4 bars of Verizon LTE. I posted almost all of my blogs. I didn’t post yesterday’s because I didn’t want to worry anyone about the conditions I was hiking through. As we cruised along the flat part of the mountains spirits were slightly up. We had made good time to hike 3 miles. We thought that maybe things were improving. Then we hit a semi-sketchy traverse through a bowl. The fall would have been about 800 feet, but I don’t think it would have killed me. Since the snow was sticky I was able to make it across just fine. I wasn’t the least bit sketched out. Once we made it across we found ourselves faced with another area of certain doom. I once again brought up my plan for an alternate way out of the San Juans. This time I had everyone’s attention. We all decided it was for the best to get down to a lower elevation and find a road to walk out on. A couple named Leopard and Rabbit approaches just as we were getting ready to leave. They really seem to know what they are doing. Yesterday they went across the ridge of certain death and made it. They said it was terrifying and wish they had taken our route. We told them about our plan to bail, but they wanted to try the new ridge of certain death. We also ran across a guy named Hopeful that really seemed to know his stuff. He wished us well and hiked on. 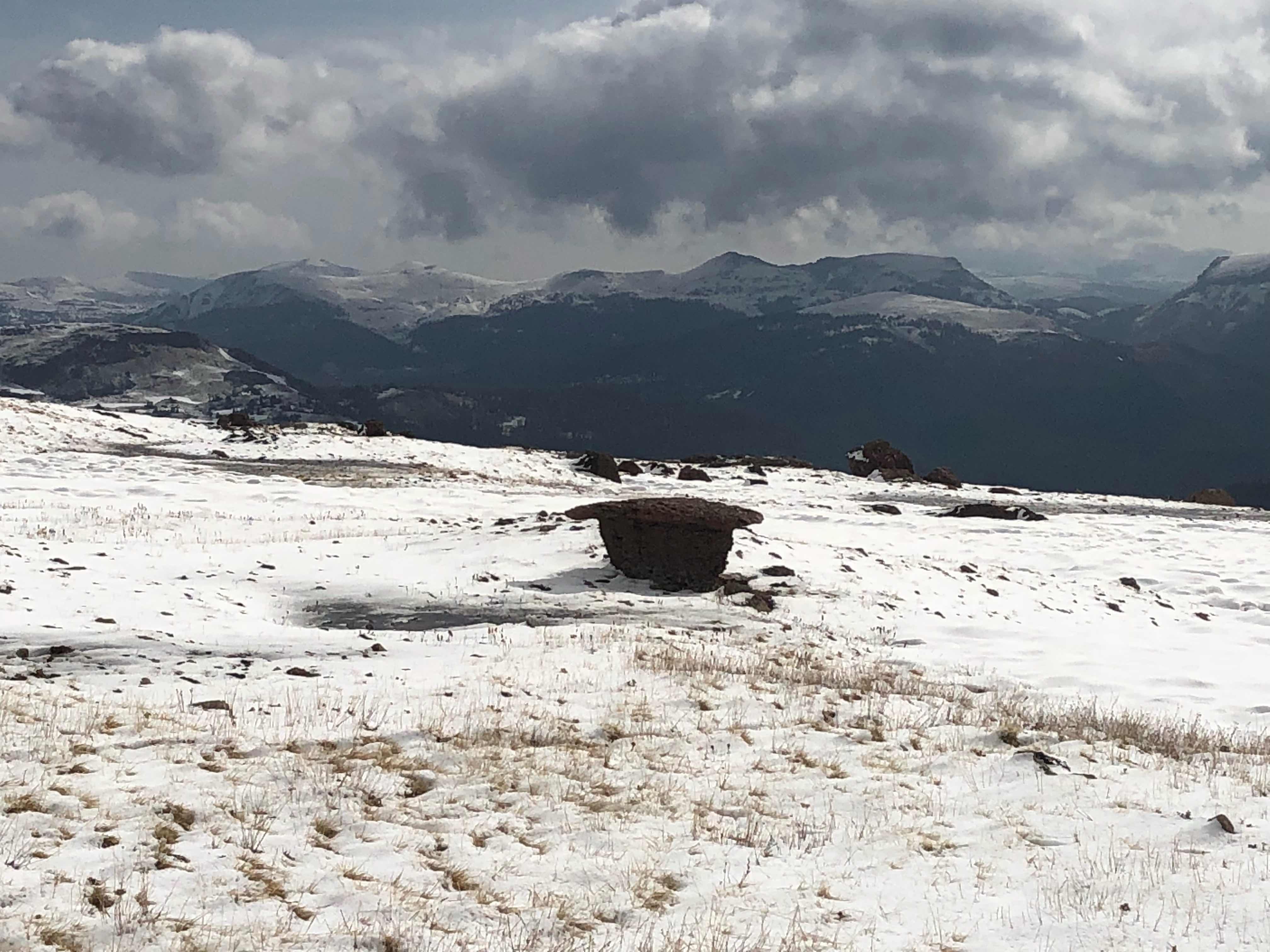 Just a cool rock shaped like a toadstool
The only problem with my proposed escape route was the drop of 800 feet down the mountain range. The only reason it was possible was because of the sticky snow. The weather I was cursing yesterday saved us today. The drop down to Treasure Creek was really fun. Instead of being the last one down and falling 20 times, I managed to keep my feet and stay right on Mangas’s tail. 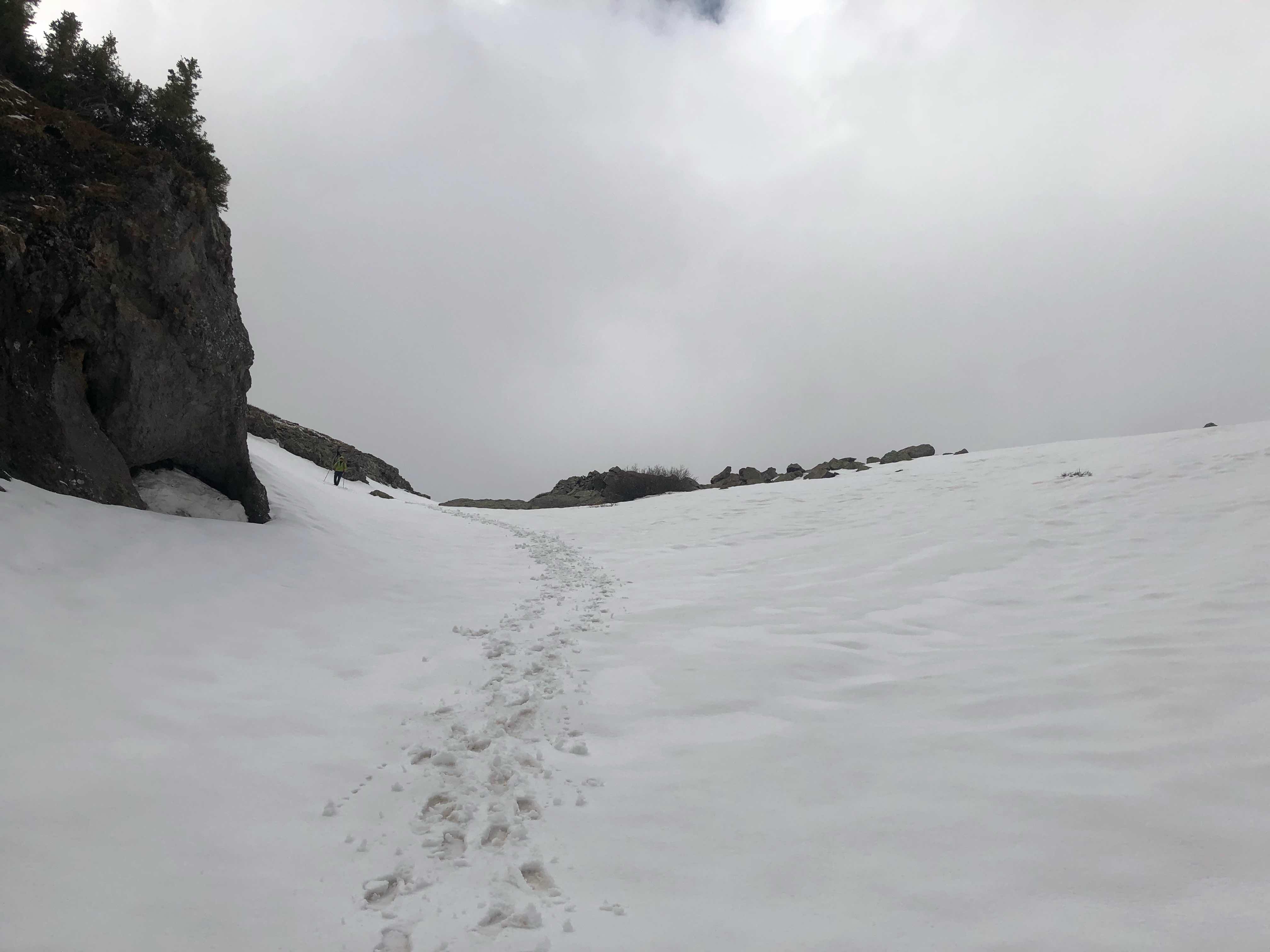 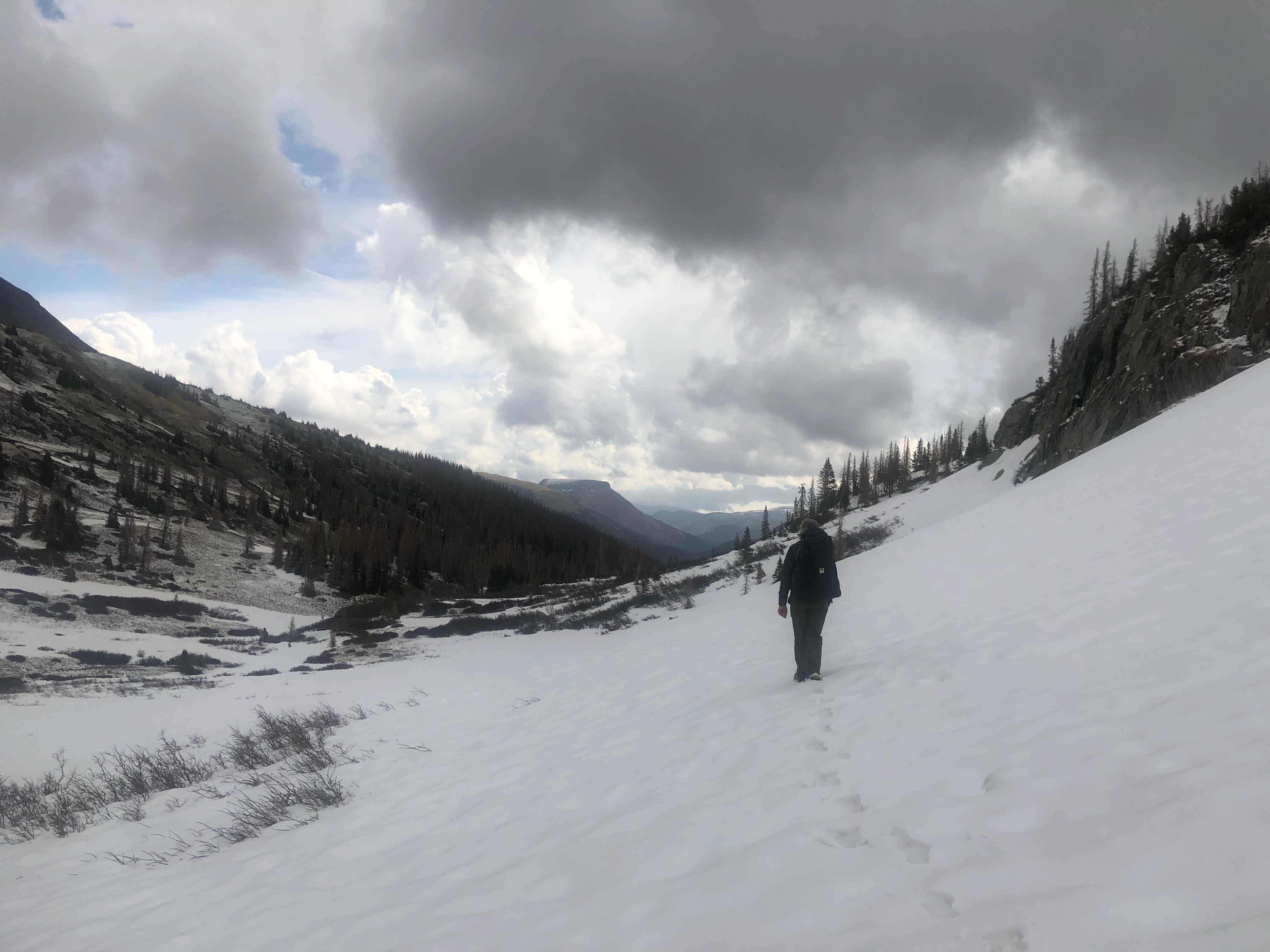 Almost down
We took a much deserved break at the bottom. Now that we had thrown in the towel and had an escape plan everybody’s spirits seemed to soar. Once again we were joking around and laughing. The plan was to follow Treasure creek to a forest road. That road would lead us to the Great Divide low elevation alternate, which would lead us to the Elwood Pass alternate, which would eventually put us on highway 160. Highway 160 is where we expected to be late Monday night or early Tuesday morning. The best laid plans, etc. when we hit the first dirt road I nearly cried tears of joy. I wasn’t even remotely bummed that I had bailed out. I feel 100% confident that we made the right decision. If anyone had any doubts they were erased when Rabbit and Leopard caught up with us. They said the little bit further they went was way worse than yesterday. They turned around and followed our path out. They said that Hopeful went a bit farther and also turned around. They couldn’t see any tracks ahead of them so chances are a lot of people also bailed at the same point. Even hiking the San Juans in a low snow year respect to the mountains need to be given. I was way to overconfident and I’m lucky that it didn’t cost me my life or a really bad injury. I’m not sure what to do going forward. I might take a week off of the trail or take another low elevation alternate and come back in the late summer and hike the high route. 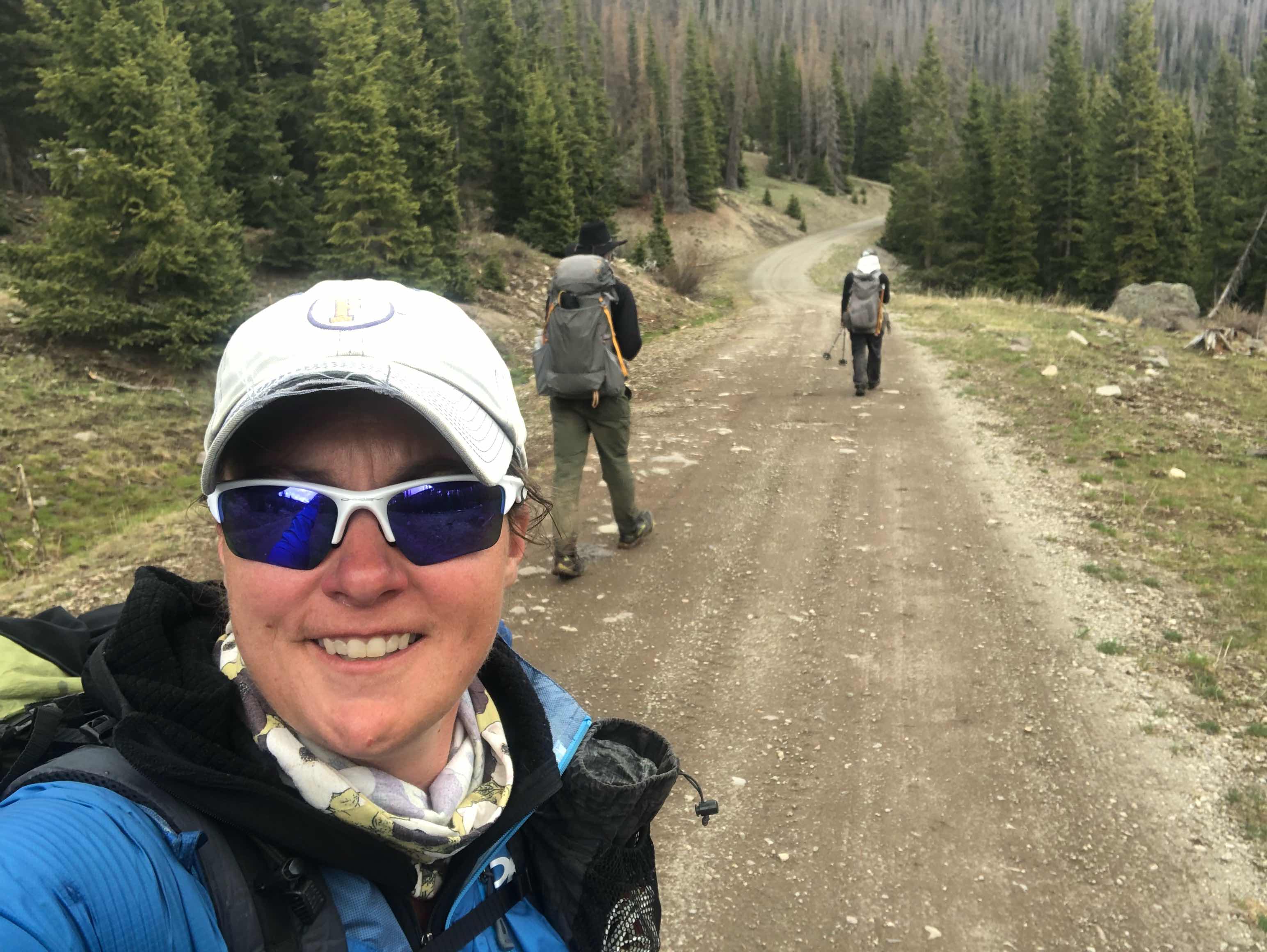 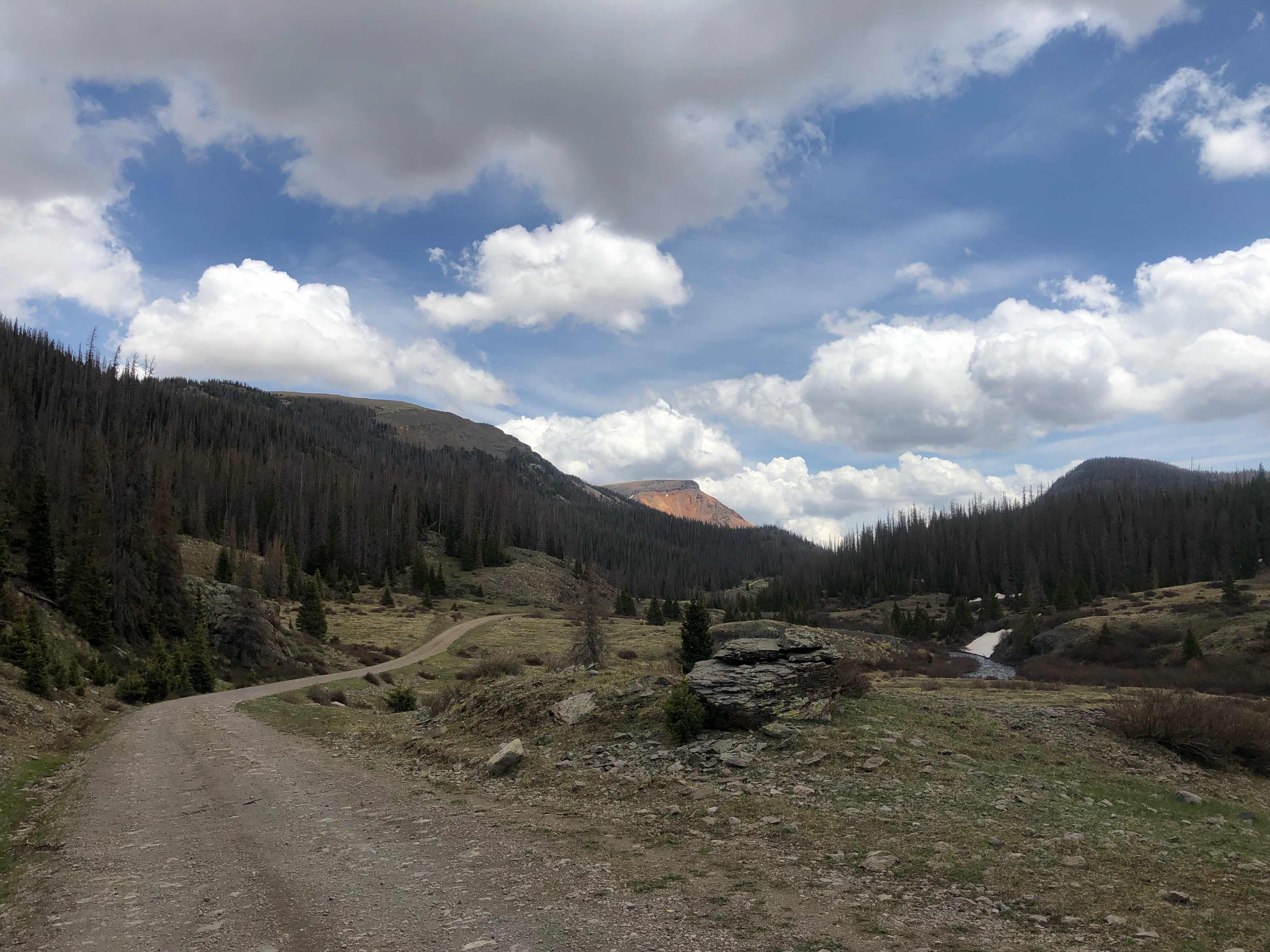 Forest road 380 is my new best friend
We really enjoyed the hike from here on out. We followed a beautifully maintained dirt road. We still got to see the big mountains, but at a more comfortable distance. We even got a little bit of sunshine and put all of our belongings in the middle of the dirt road to dry out. Just knowing that I didn’t have to lay in a wet tent, clothes, and sleeping bag tonight was such a huge moral boost. We will be in Pagosa Springs in time for breakfast. I am definitely, 100% taking a zero day there. I need time to rest mentally and physically. Plus I need to plan on where to go from here. I’m pretty sure I’ll do the low elevation alternate and when things begin to melt more up north I’ll jump back into the high route. 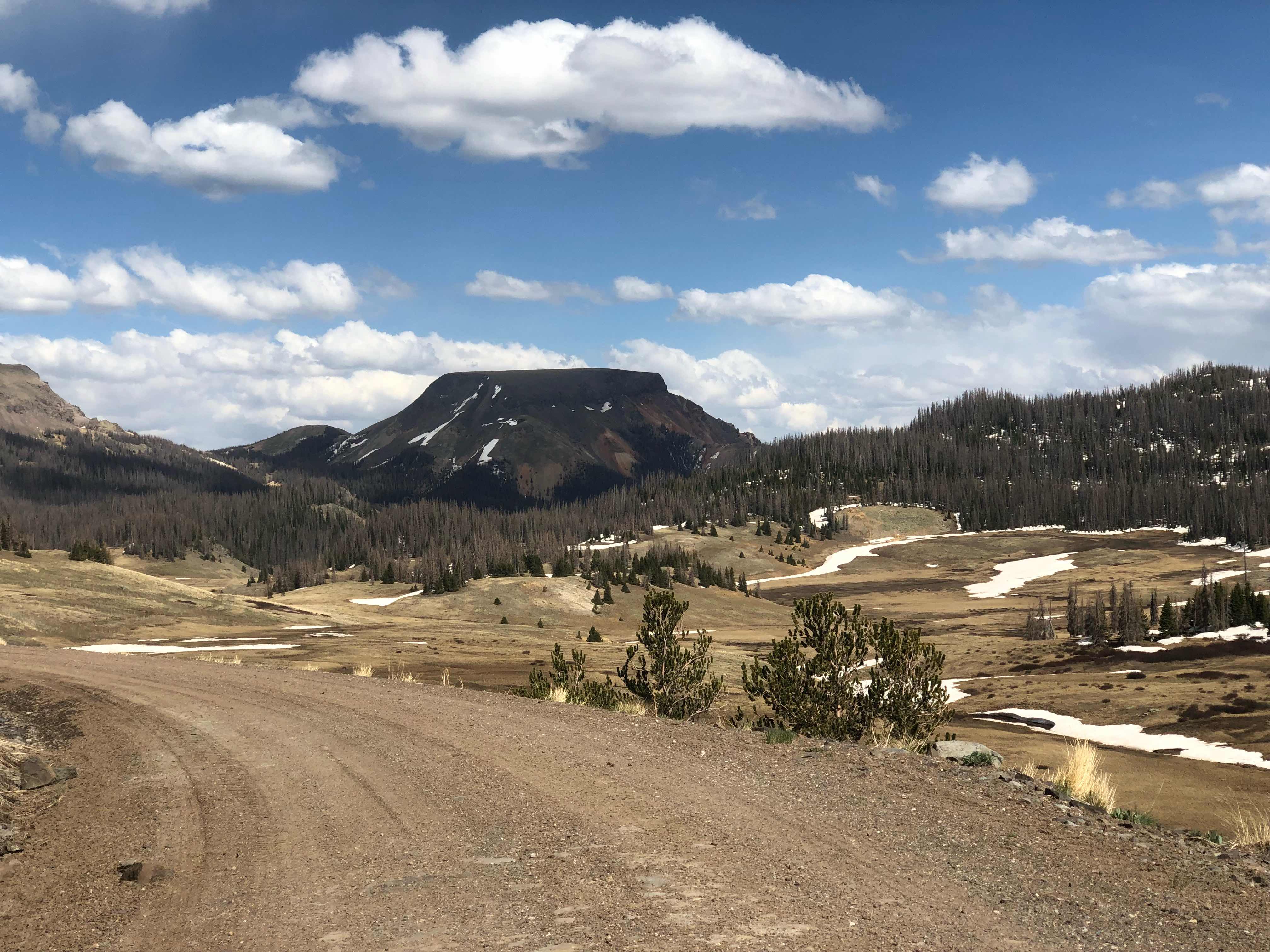 Pretty nice ending to a scary few days
We hiked until 7pm, which is the latest we have hiked in a long time. I’m also camped below 11,000 feet for the first time in days. It is such a huge difference I can’t adequately explain it. I had a homemade dehydrated meal for dinner and it was my best yet. I dehydrated yellow grits, bbq chicken, red yellow and green bell peepers, banana peppers, and onions. I can’t believe how well it turned out. The only problem was I need about quadruple the amount of food. My portions were way off. 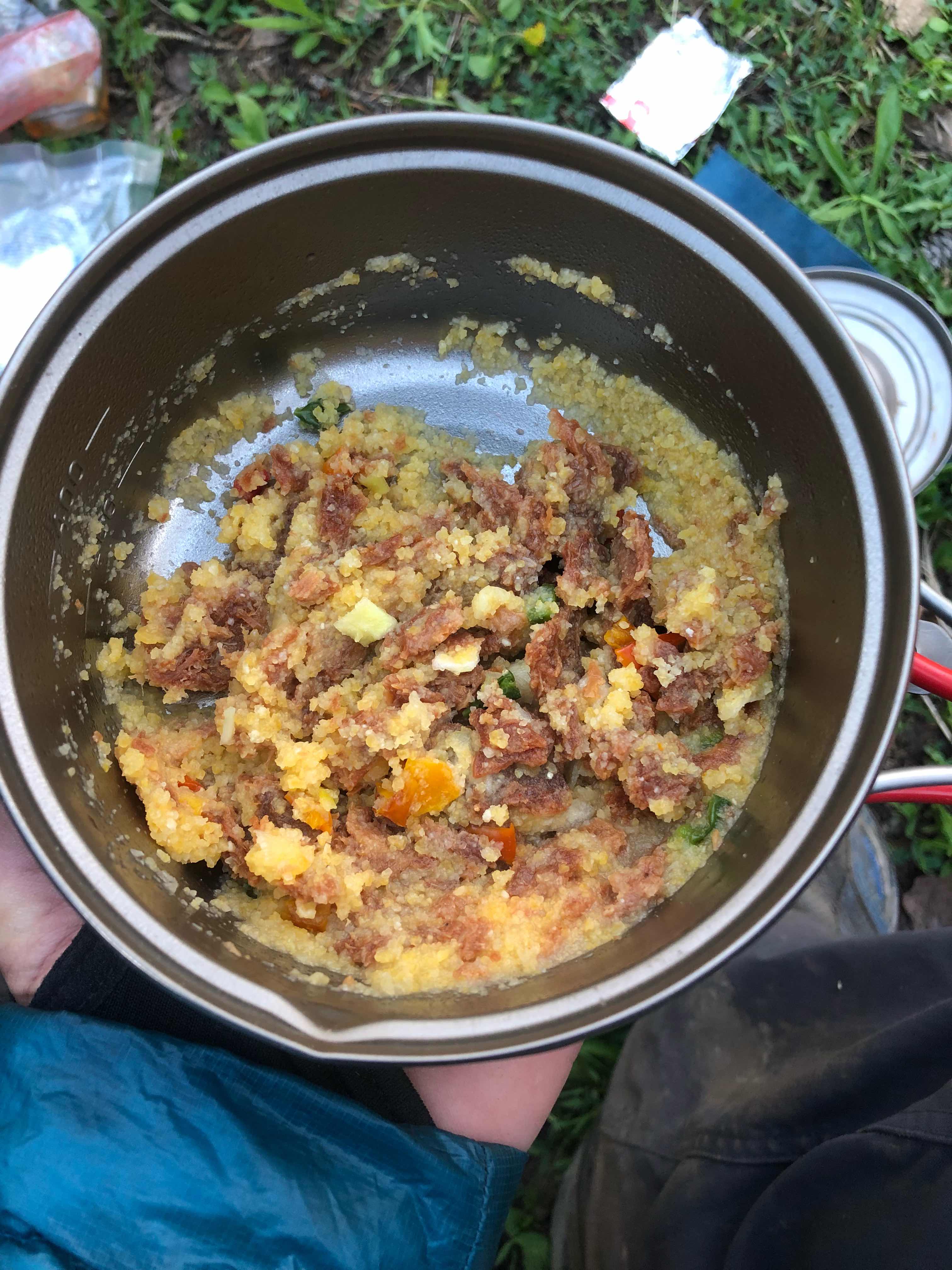 What a boost to have a home cooked meal after the last few days
“Bad things do happen; how I respond to them defines my character and the quality of my life. I can choose to sit in perpetual sadness, immobilized by the gravity of my loss, or I can choose to rise from the pain and treasure the most precious gift I have - life itself.”
- Walter Anderson