Last night was a weird night. I stayed up after writing my blog. I saw six shooting stars and a satellite moving across the sky before I fell asleep. I woke up pretty quickly when it started to rain because I was cowboy camped. Luckily, it only rained for a minute or two and it wasn’t very heavy. Then I woke up again a few hours later because I was sweating so badly. I had to take off my puffy and unzip my bag. Then a few minutes later I was awakened again when I heard a large animal moving around close to me. I’m pretty sure it was an elk or a deer, but I find it is best to not ponder the different possibilities too much. Maybe thirty minutes later I heard the animal again. Just after five o’clock the wind picked up and I woke up and put my puffy back on. I was a little tired this morning.
I was ready to go before Straws and Piñata, so I decided to leave camp and let them catch up. To be honest I was looking forward to hiking alone for awhile. I’m sure they were happy to have some time alone as well. 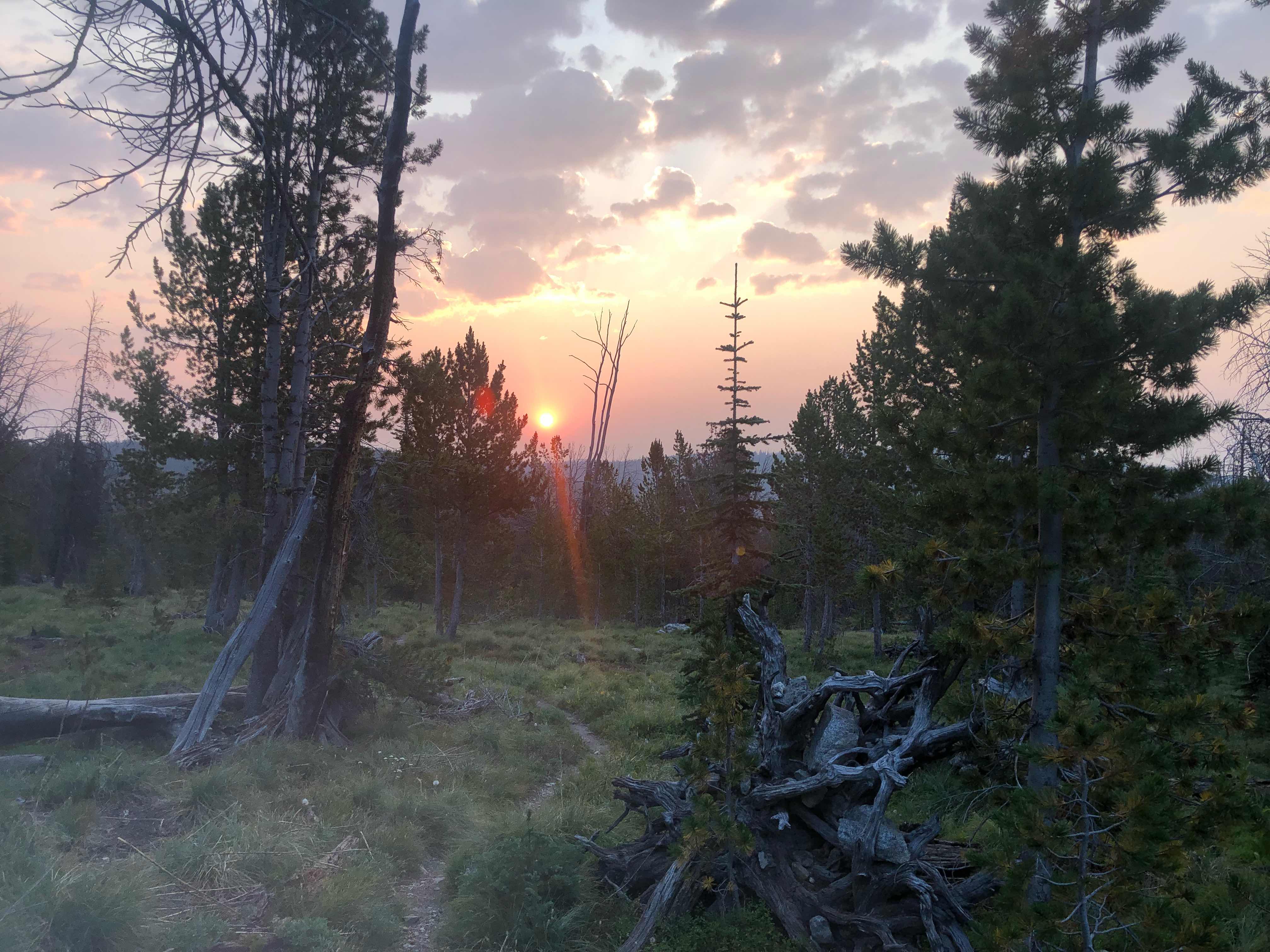 Sunrise shortly after leaving camp
After hiking about a mile and a half I entered into the Anaconda-Pintler Wilderness. This area is supposed to be one of the highlights of the trail. I wasn’t sure what to expect. The area suffered a 300,000 acre fire last season. I was hoping I wouldn’t be hiking through a burn zone all day. Even though I didn’t get much sleep last night, I was full of energy. I think a lot of it came from the sheer joy of hiking my own pace and being alone with my thoughts. The first few climbs were very well graded and I was crushing it. I did in fact send most of the morning and early afternoon hiking through a major burn zone. It was oddly beautiful and sad at the same time. I was struck by the thought that it was a beautiful disaster. 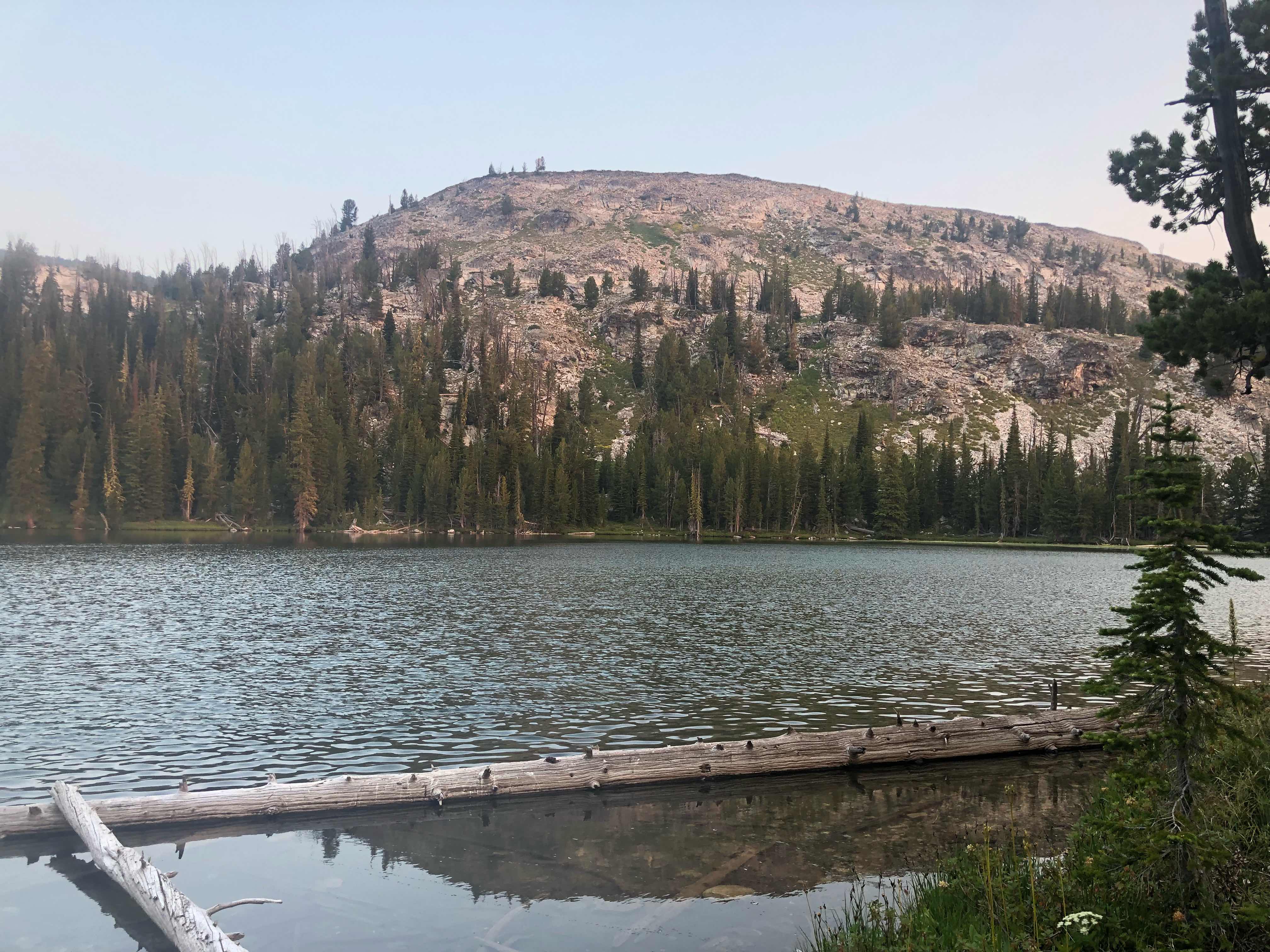 Surprise Lake, I wasn’t all that surprised 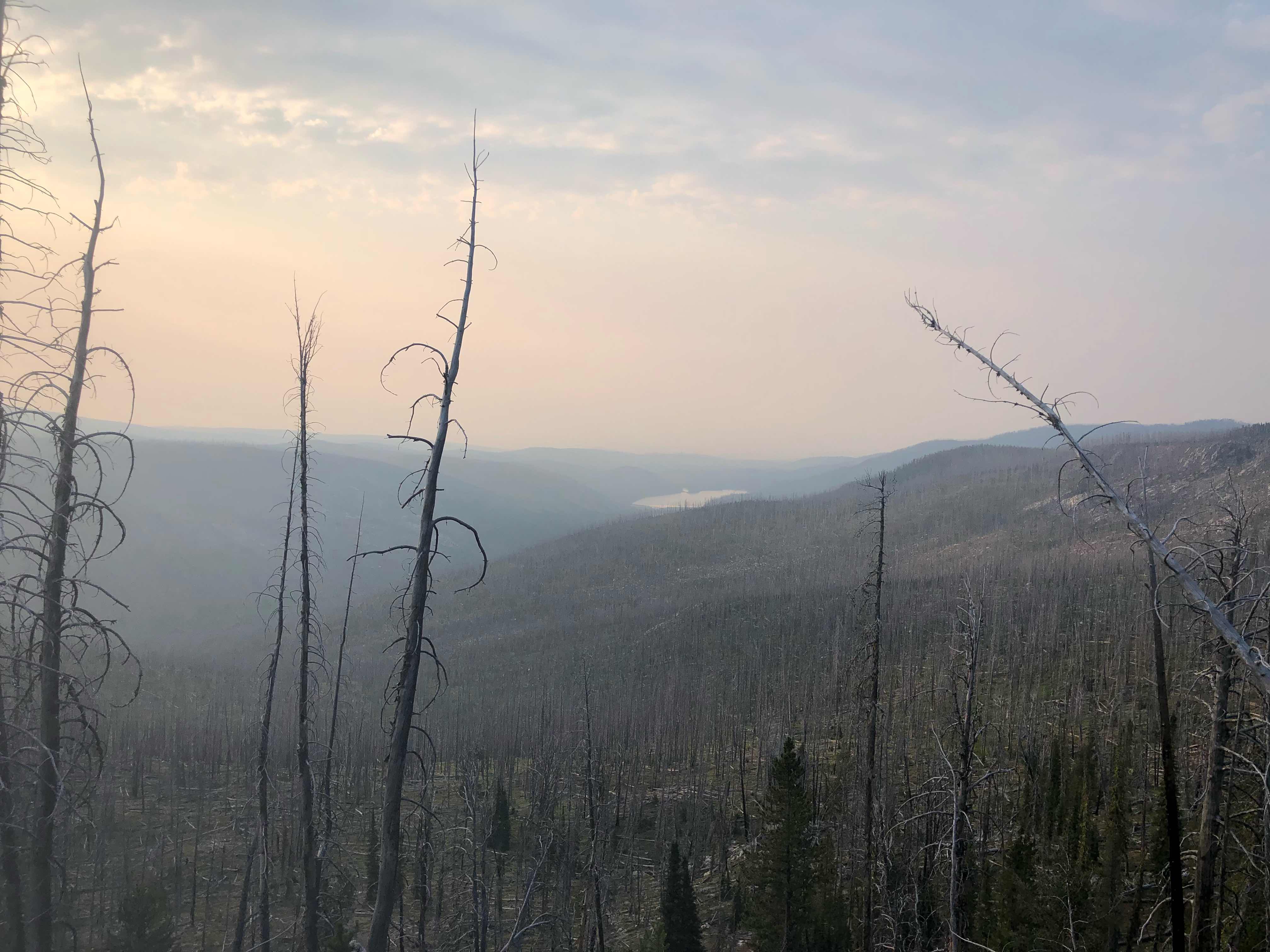 Smoke from all of the West Coast fires 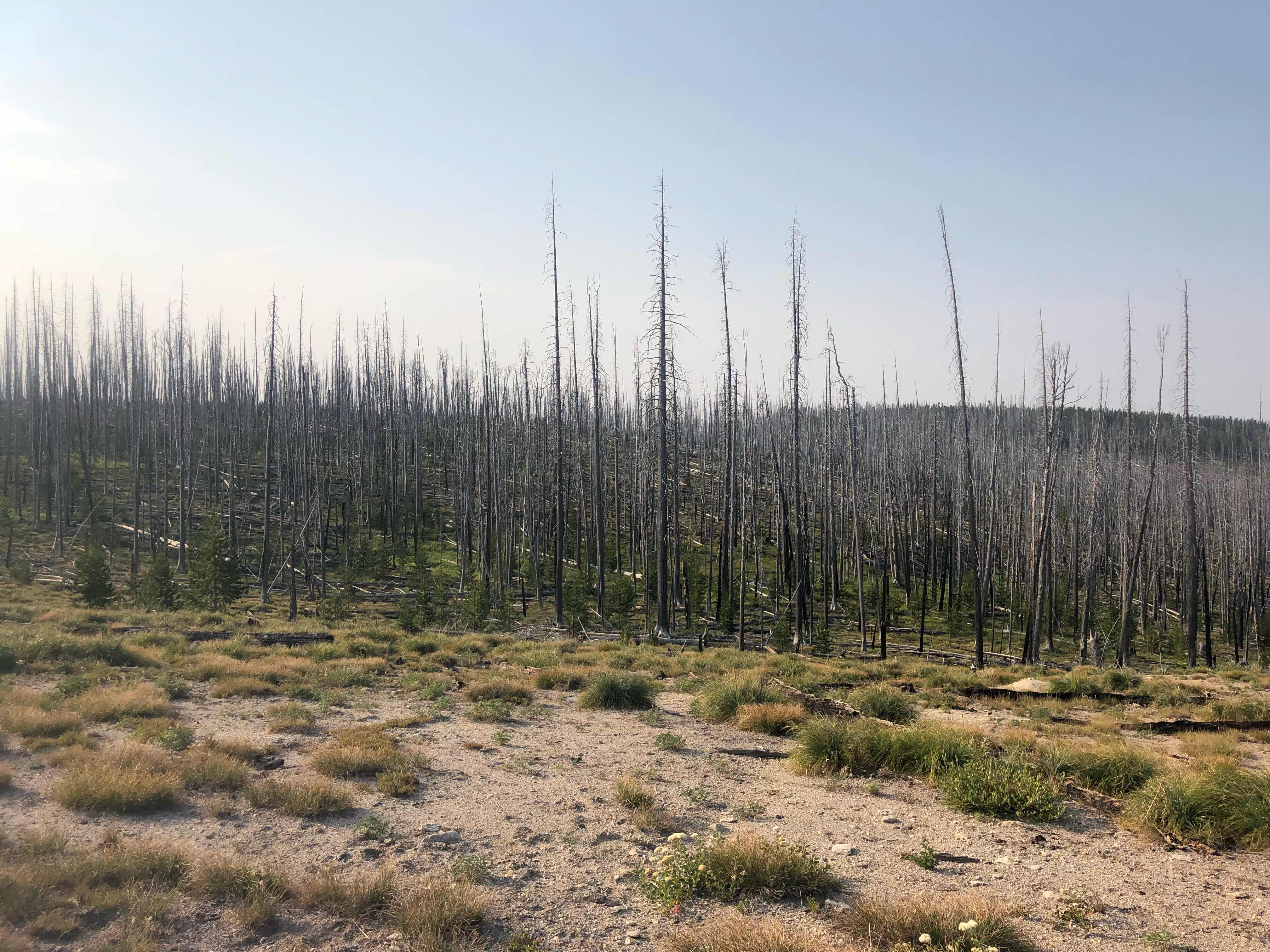 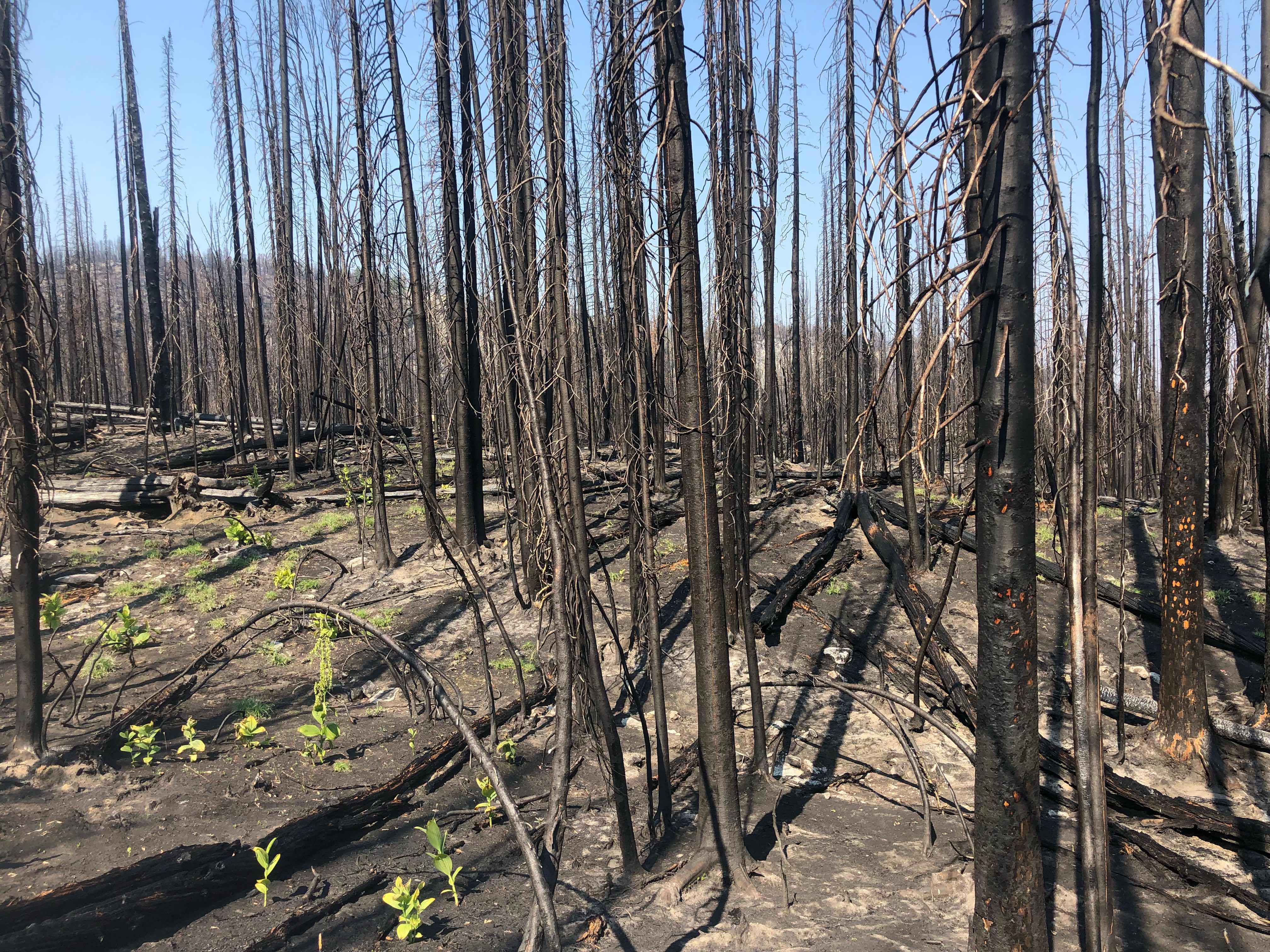 Beautiful disaster
I kept up a 3 mph pace all morning long. By noon I had hiked 15.3 miles and had only taken 2 short breaks. Straws and Piñata caught up to me around mile 14. We took a medium sized break next to a creek. So far it was mildly hot, but there was a nice breeze. The miles we had hiked so far were nice graded and not super difficult. I wish I could say the day continued like that. After our break we had to climb about 1,000 feet, it wasn’t a very steep climb, but it was warming up quickly and our breeze was dying down. During the entire uphill I could here a plane circling us. When I finally caught site of it I could see the Forest Service markings on it. At first I figured it was scouting the fire we passed around Goldstone Mountain a few days ago, but after thinking about it some more that did not seem right. The plane was in the wrong area. The more it stayed around us the more concerned I became. Just as I was wondering if there was another fire close by, I looked to my right and saw a fire on a ridge about half a mile away. There were multiple areas on the ridge on fire. I wasn’t concerned for our safety, it was far enough away and the valley between us would act as a natural fire break. I have been really lucky on this trail with fire closures. The area we hiked through the other day that I posted pictures of a fire, Goldstone Mt. is now closed. That includes the CDT, hikers just behind us are having to walk a road to get around the fire. Hopefully this new fire is brought under control quickly. 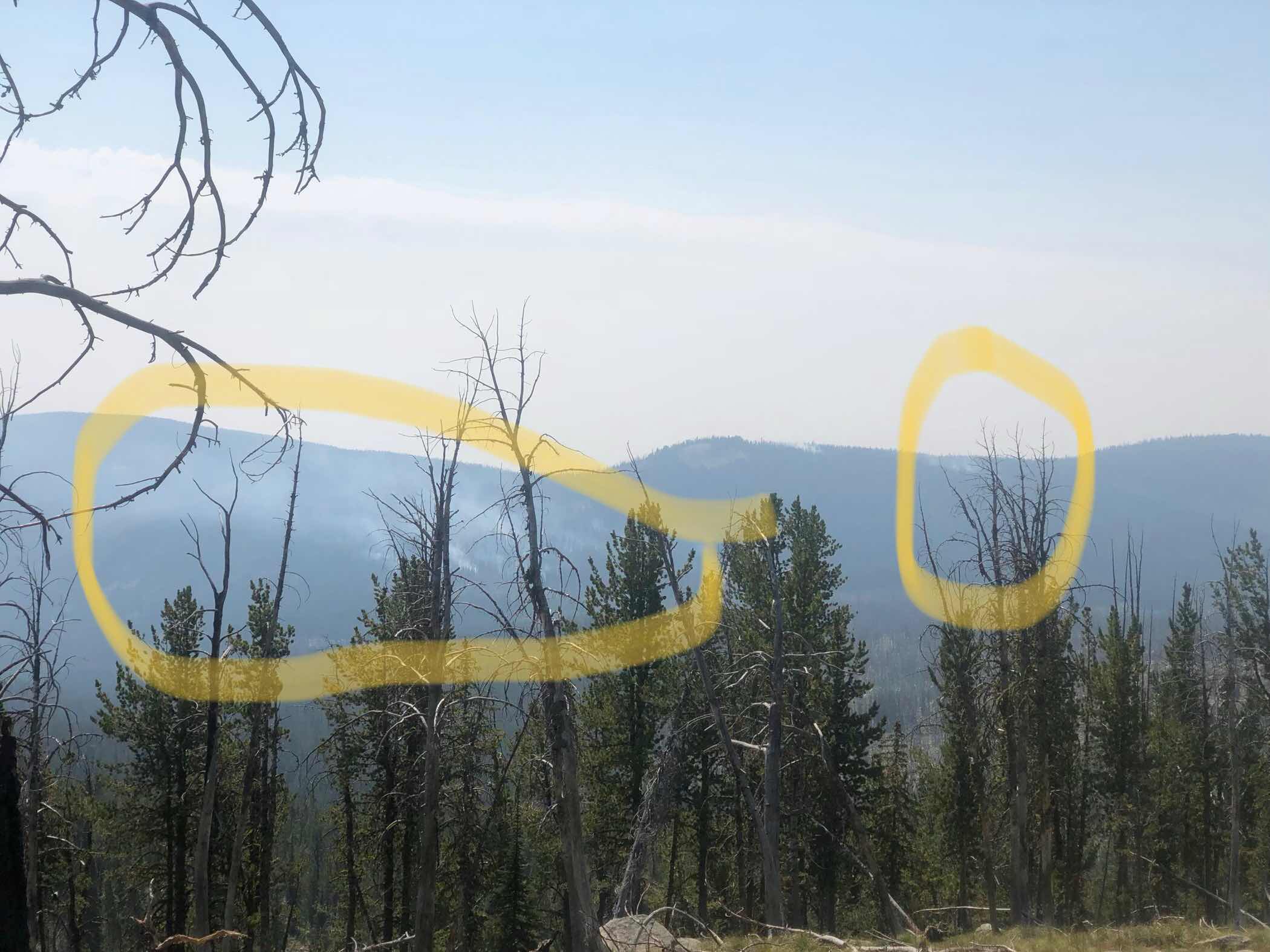 Hard to get a good Picture of the fire. I marked the areas where I could see the smoke
Just after hiking past the new fire the trail descended into a different valley. The haze wasn’t as bad and the burn areas mostly went away. We had two back to back hard climbs and descents to deal with. We took a long lunch break in the shade next to a babbling brook. The first uphill was 1,300 feet over a few miles, then we dropped 1,500 feet over the same distance. At the end of the downhill we found ourselves next to a nice lake. I thought about going for a swim to help cool down, but I didn’t want to climb the next mountain with wet shorts on. This particular lake was another milestone for us. Our Guthook app has 5 different sections of maps. This lake marked the end of the fourth section and the beginning of the fifth. It might seem like a little thing, but we were very excited. The last few days have been irritating having to constantly switch between two map sets any time I wanted to get info on what lay ahead. 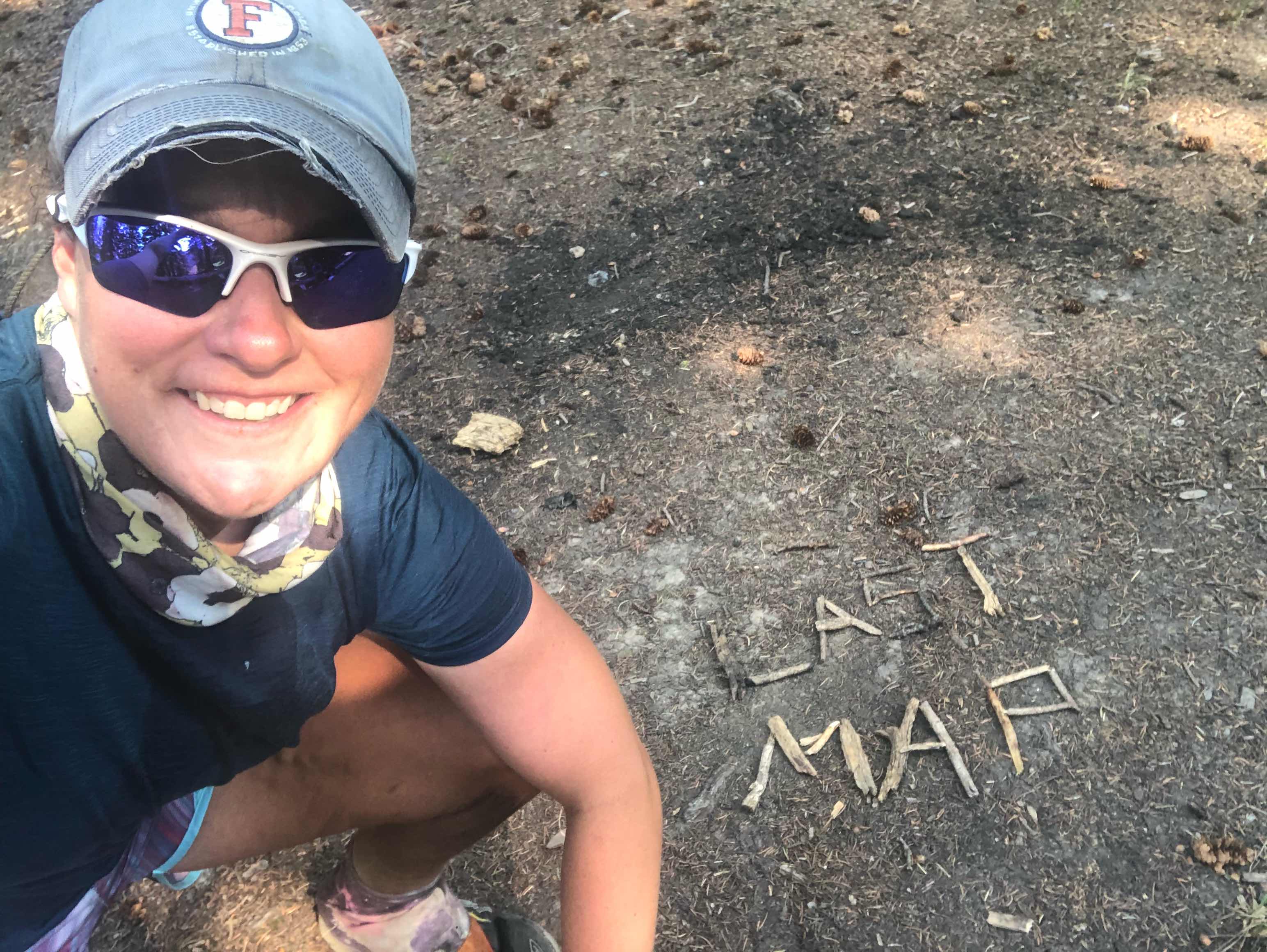 Not exactly a mile marker, but a milestone marker nonetheless
We ate a few snacks and rehydrated before starting up the last big climb of the day. I was really feeling the fast miles and heat of this morning. I would have been quite content to just lay down and take a nap. The climb was actually easier than the one before even though it was a few hundred feet higher and over less miles. I think it was because there was more tree cover. We even got a good view from the top of the Pass. The downhill was hellacious on me. It went on for almost five miles. My body(knees especially) does not like long downhills. I get bored quickly and my feet were extra tender to today. This really made for a rough ending to an already long day. 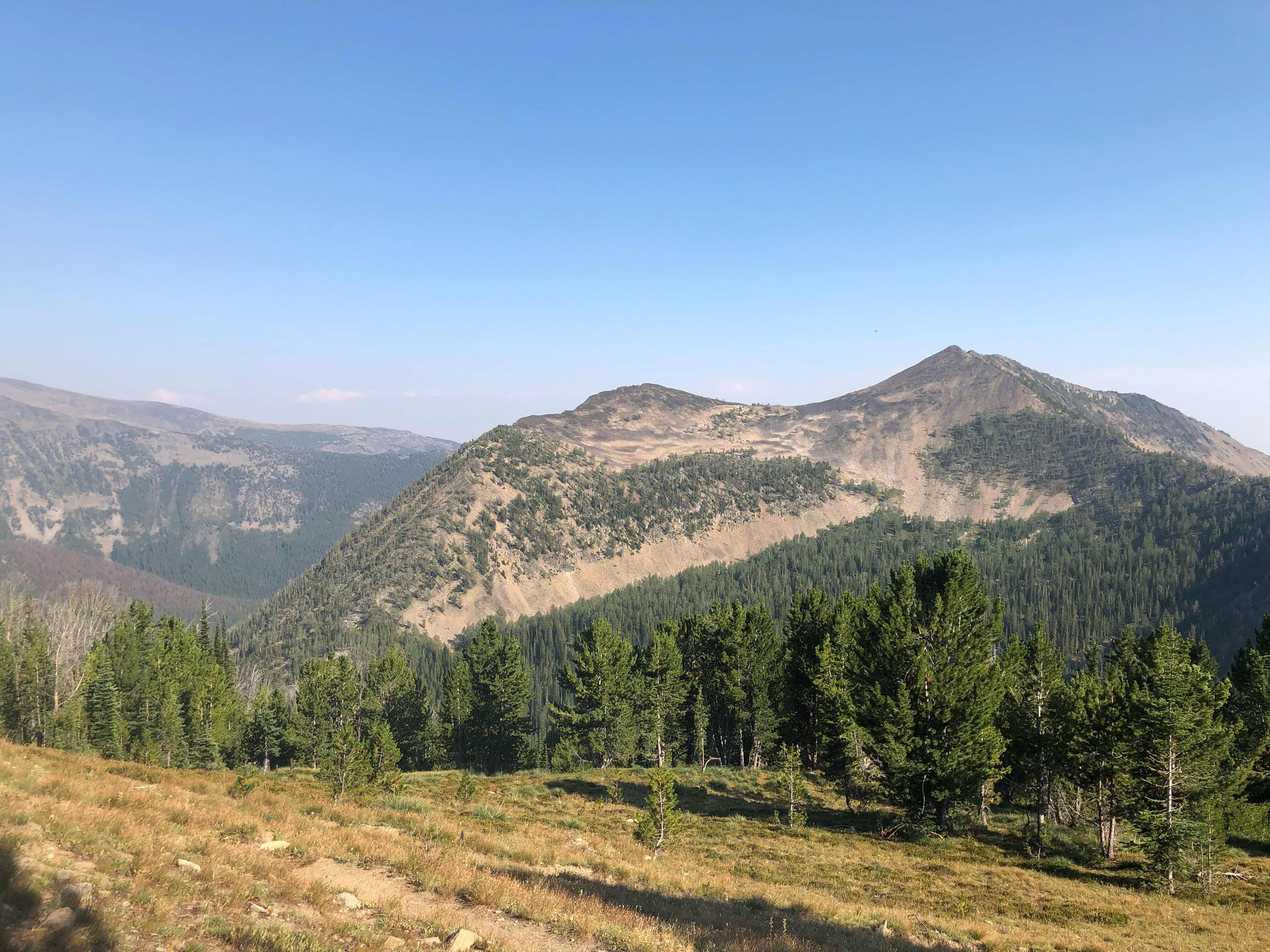 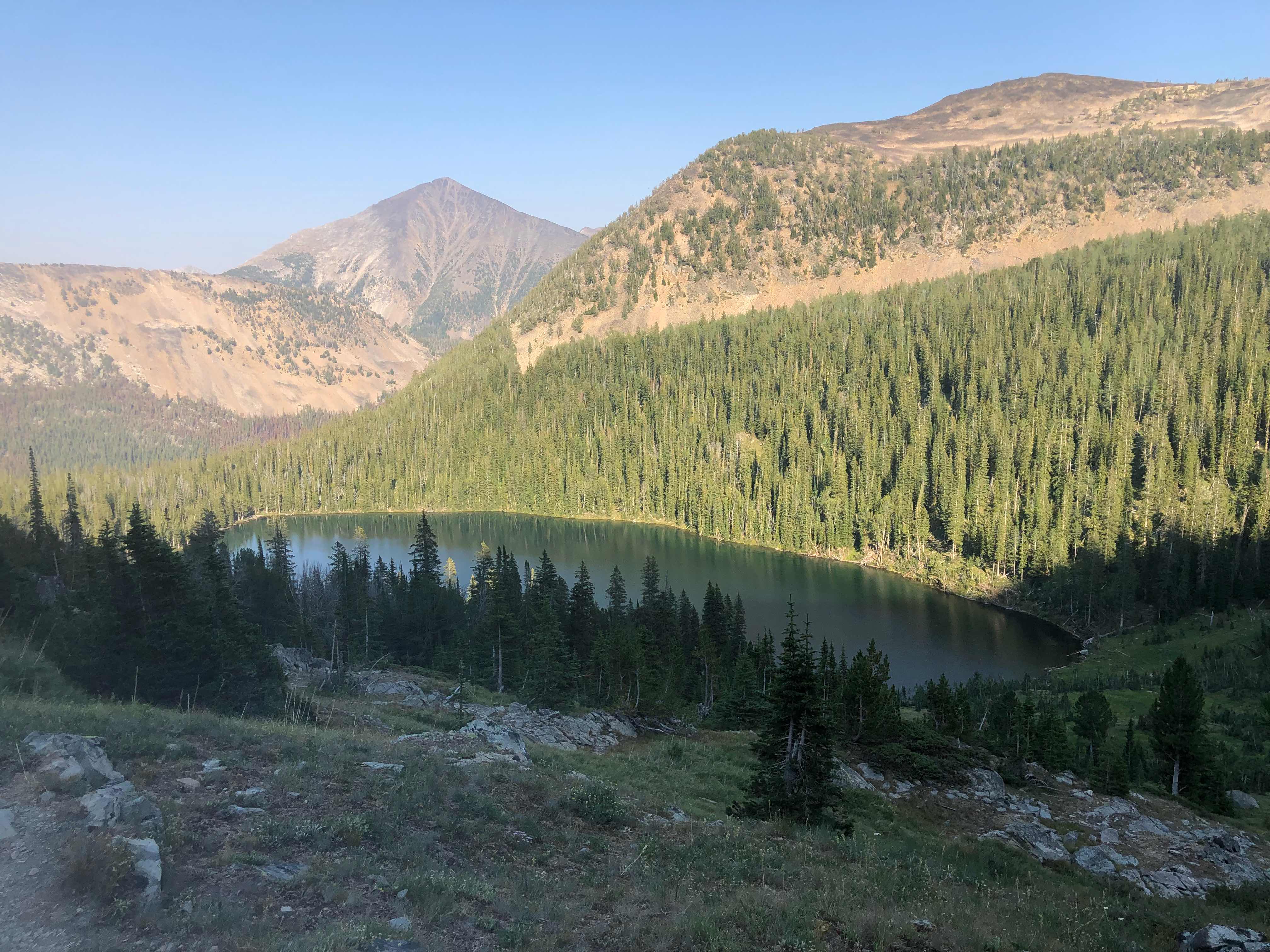 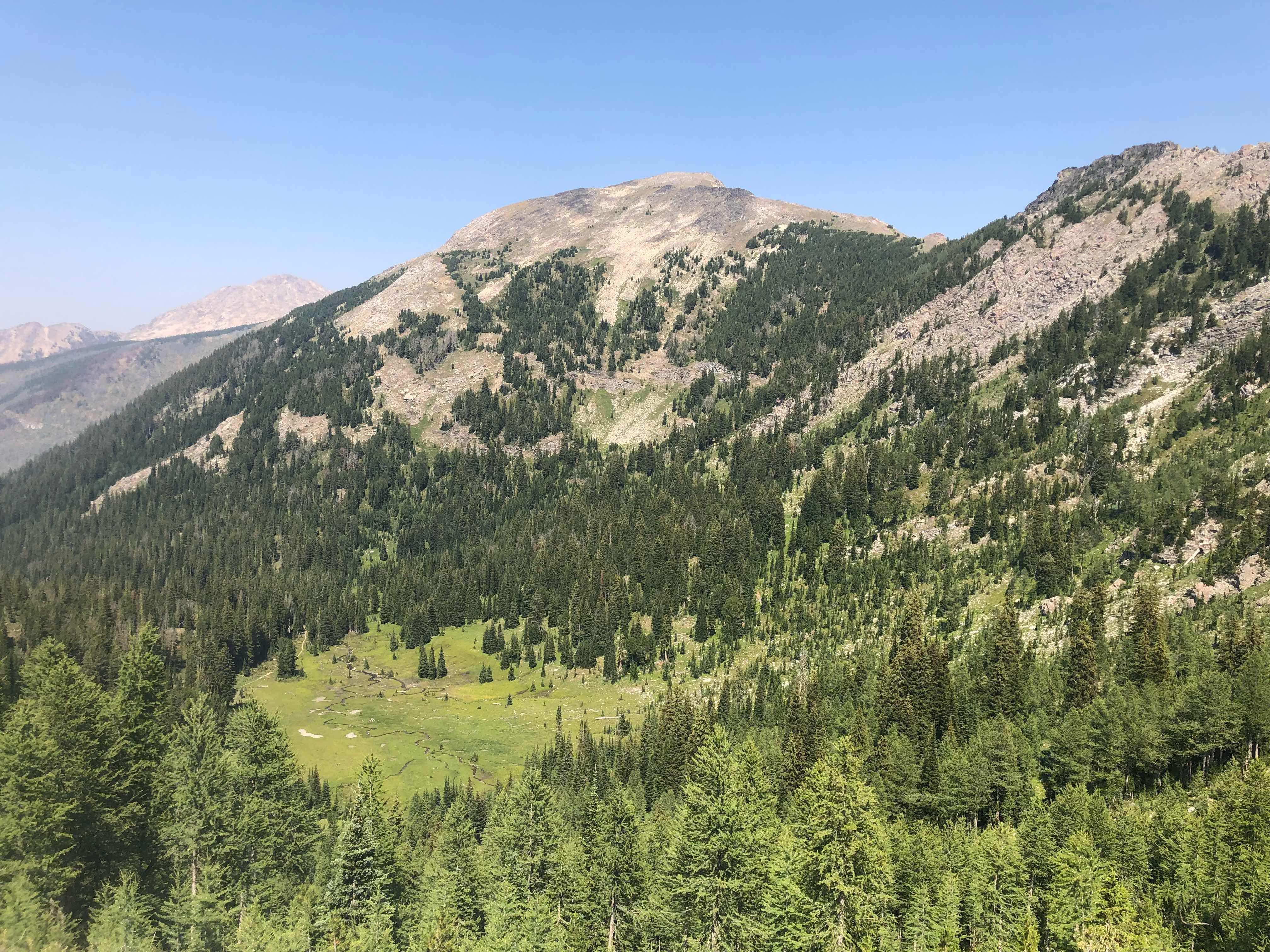 Earlier view from Pintler Pass
I’m looking forward to watching the meteor shower tonight. Let’s hope I can stay awake longer than I did last night. Tomorrow should be another big day. I’m hoping it cools down a little bit.
“Faith is not simply a patience that passively suffers until the storm is past. Rather, it is a spirit that bears things - with resignations, yes, but above all, with blazing, serene hope.”
- Corazon Aquino