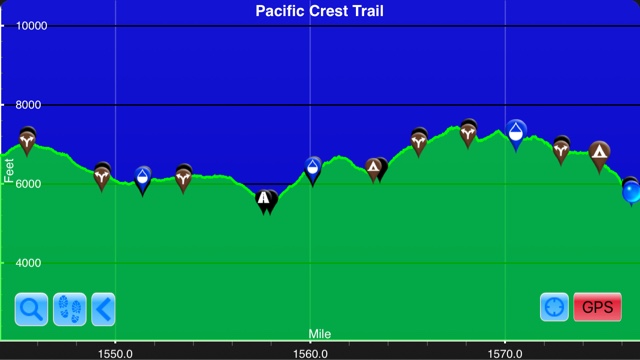 Total up/down:+3927/-5203 feet
Last night was so epic. I had a front row seat for the Perseid meteor shower. I watched the fireworks in the sky for as long as possible. I fell asleep around 11:30. Something woke me up around 2:30. As I fumbled around in the dark for my water bottle I noticed that the moon had set. I had an even better view of the stars. I could clearly see the Milky Way. I saw a few shooting stars that were so bright they looked like asteroids or comets. I tried to keep my eyes open, but I quickly fell back to sleep. When I woke up in the morning I was greeted by yet another spectacular sunrise. 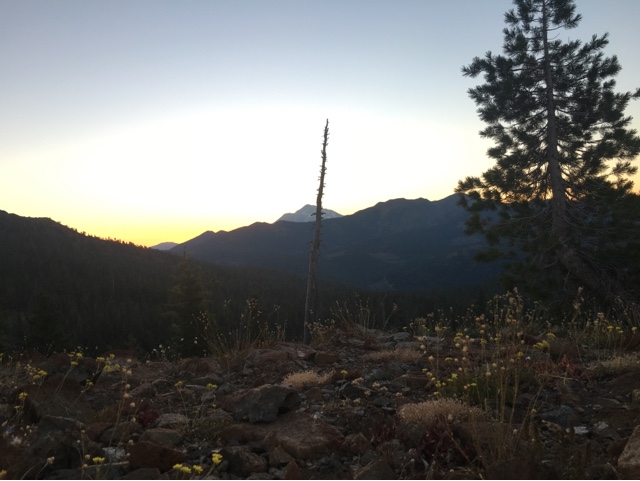 Didn't get a picture right away
The plan for today called for hiking thirty-two miles by seven o'clock. I was hoping to make it to mile 1577 because I knew that there would be trail magic. I was contacted via my blog by, Glide, a former PCT hiker. He was going to be doing trail magic for the weekend with his friend Tree Frog. The early part of the day went well. I hit all of my minor check points on time. I hiked ten miles by ten o'clock even though I had a later start than usual. I passed by a few lakes, but none of them were right on the trail so I wasn't to tempted to stop. After leaving camp I hiked through a mixture of exposed trail and forested trail. The forested trail was really pretty and a lot cooler temperature wise. 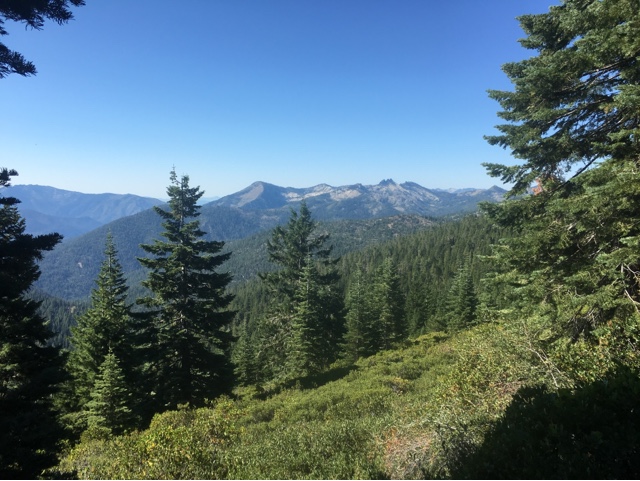 Greenery all around
I made it twelve miles before taking my first break. I came down to a road with a trailhead. I could see a bunch of coolers in the parking lot and I got really excited. It looked like trail magic. I was supremely disappointed to discover that all five coolers contained nothing but trash. I was so dejected that I sat down and took a break. I had planned on hiking fifteen miles before breaking. 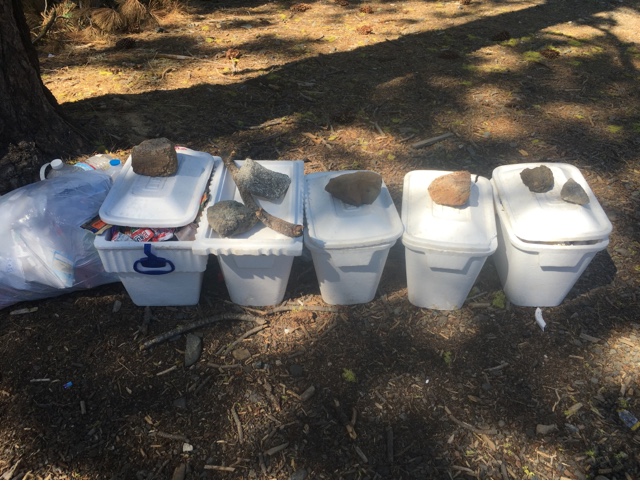 Old trail magic
I mixed up the last of my Gatorade, sat in the shade, and ate a snickers. It was almost like trail magic. The next ten miles went by in a blur. It was really hot out, but that is nothing new. It still hasn't gotten any easier to deal with. The scenery was constantly changing. One minute I'd be in the trees, the next would be out in an exposed section. Most of the time it is exposed, it also means rocky. Today was no exception. 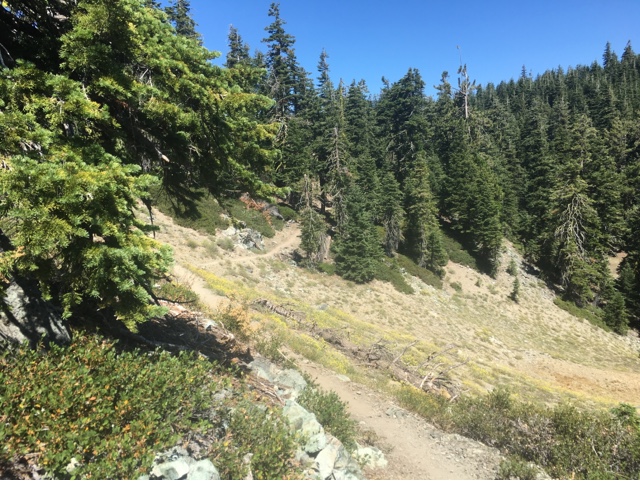 Exposed, but almost back into tree cover 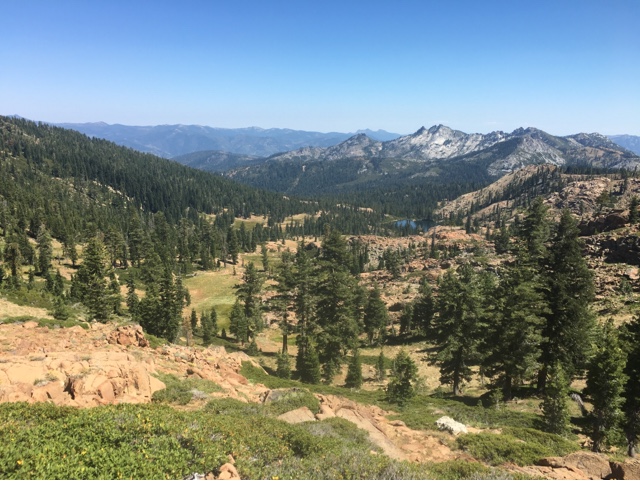 Lakes and rivers in the distance 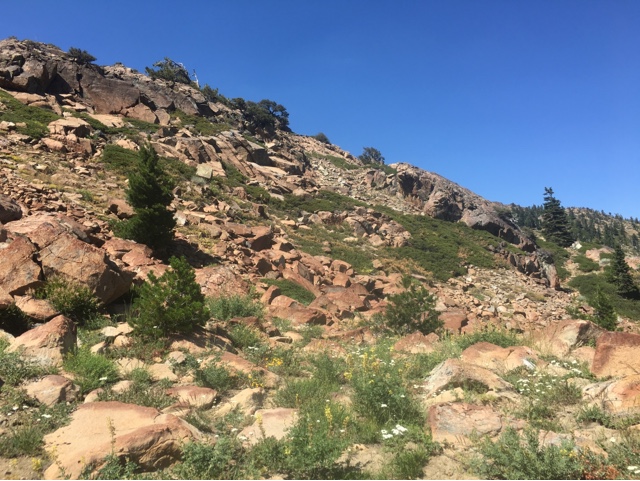 Red rocks
I didn't start to hike down struggle street until mile twenty-seven. I always seem to struggle with miles after that. I guess 27-28 miles is within my comfort zone anything after that is a bit difficult. I like to think of it as anything less than twenty eight miles is on the light side and anything over is a product of the dark side. Lately I've been pushing into the dark side more and I wonder if I will have to pay the price physically later on. Right now my body seems willing and able. Any minor aches and pains as a result of the long days I manage to sleep off. Hopefully this trend will continue.

Dark and light side manifested in the mountains. I took this picture at mile 29 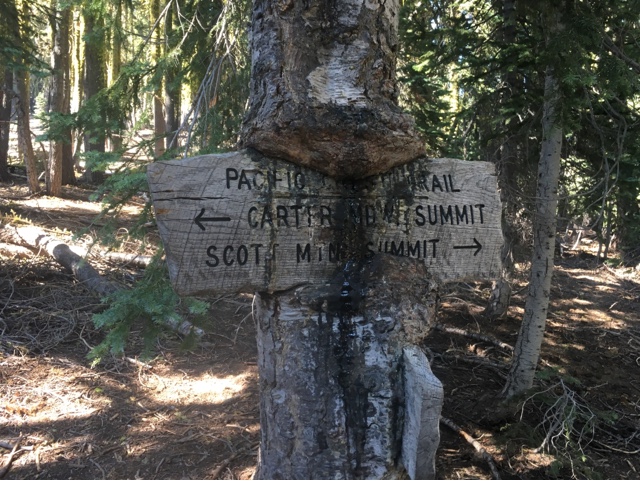 Tree growing around trail marker
When I finally made it to mile 31, I decided that it was time to stop for the day. My feet, back, and shoulders were all sore. There was a great spot to cowboy camp close to a river. I was only one mile short of the trail magic, but I wasn't sure they would still be there. My maps just showed a road and I wasn't sure I could find a place to camp there. I decided to stick with what was known as apposed to hiking into the unknown. I enjoyed another dehydrated meal that Wolf had gifted me. I wrote my blog post and watched some more of the meteor shower. It was another magical night.
I have fallen behind on saying my thank you's. To everyone that has recently donated to the cause, I really appreciate your generosity. Soda Pop and Skittles, who I had the privilege to meet on the Appalachian Trail last year gifted me with gift cards. Chris from Nashville bought me a new hiking shirt. I get to keep my trademark purple! Larry Riggan sent me a very generous donation. I also received seven AlpineAire meals from an anonymous person. Thank you to all of my trail angels. You make the late nights of writing this blog a lot easier. I'm just happy to know that people enjoy what I write. I would love to hear what it is that draws you to reading a blog about thruhiking.
"Have you had a kindness shown? Pass it on; 'Twas not given for thee alone, Pass it on; Let it travel down the years, Let it wipe another's tears, 'Til in Heaven the deed appears - Pass it on."- Henry Burton (1840-1930), Clergyman, Writer
* I have been asked quite a few times how I get my quotes. My brother, Anthony, reads my blog everyday then he finds a quote to sum up what the theme of the day is. He sends me a text message everyday with a new quote to use. He does a great job! I'm lucky to have such great support from family, friends, and strangers(who have become friends)
Posted by Yoda at 11:30 PM