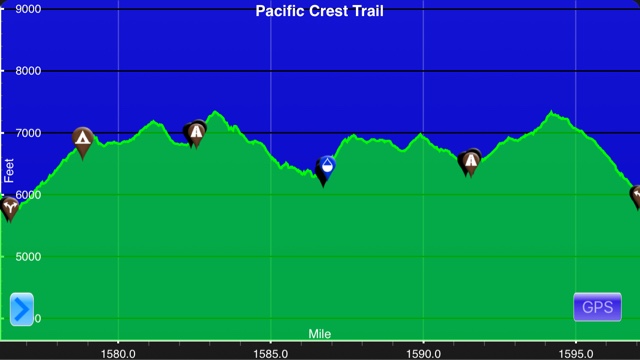 Total up/down: +4371/-4173 feet
I treated myself this morning by sleeping in until 6:40. I wanted to sleep until seven, but sadly that did not happen. I actually woke up at six and then snoozed on and off until 6:40. I was still sleepy, but I couldn't fall back to sleep so I figured I should just get up. I only had to hike one mile before I made it to the trail magic. It was all uphill, but I prefer to start my day going uphill rather than downhill. Starting the day with a climb is a better way to warm up my muscles. I made it to the trail magic by 8:30. It turns out that Glide and Tree Frog had camped there last night. I could have had beer, soda, and burritos for dinner. Oh, well. I enjoyed my campsite and dinner. Although I would have liked to have had an ice cold soda. It was great to meet Glide and Tree Frog. They provided some great trail magic. I got my ice cold Coke and some fresh fruit as well. Thanks guys, you rock! 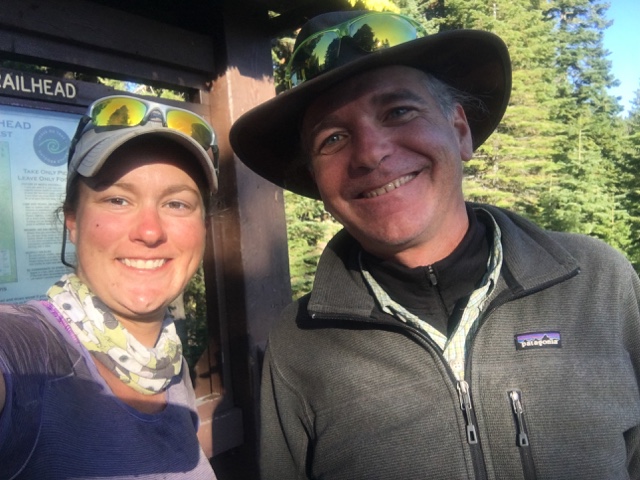 Glide and I
Unfortunately, I couldn't stay for long. I still had nineteen miles to hike before I made it into town. I didn't get moving again until after nine o'clock. Hitching into Etna can be rather tricky. The road into town doesn't have a lot of traffic. I heard you can wait at the road for over an hour with zero cars passing by. The good news is that almost every car that does go by stops for hikers. Rumor has it that Etna is very hiker friendly. I wanted to get to the road no later than five o'clock. That way if it took awhile to get a ride I wouldn't get to the hostel super late.
The terrain today made for slow miles. There were two pretty good climbs and a lot of talus fields and I had the heat to contend with as well. This section of trail has been really beautiful, but it has also been brutal to hike through. It isn't as challenging as some of the other sections I've hiked through, but mentally I'm exhausted. The high mileage days are starting to get old. I'm looking forward to getting to Ashland, Oregon. Due to all of the high mileage days lately I've gotten ahead of schedule and I can afford to take a zero day there. It will be nice to have a day to relax.
After I left the trail magic I hiked for another mile and I hit another trail magic. A nice gentleman had driven up a bumpy dirt road to bring hikers water. He had heard that the water sources for the next eight miles had dried up and wanted to make sure that we had enough water. I chatted with him for a few minutes before heading out again. Did I mention that the miles were coming slowly today? The next three miles were really uphill and very rocky and really hot. The view was incredible, but for the most part I kept my head down and trudged up the hill. 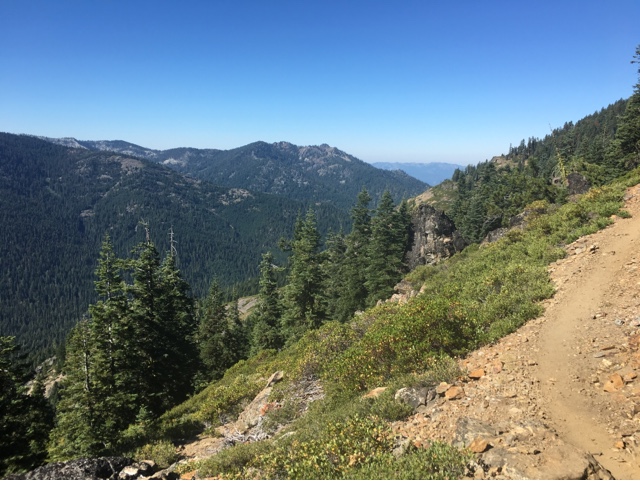 View from the top
After I knocked out the first climb the trail dipped back downhill slightly. I followed the contours of the mountain for a little while before climbing back up and over to the other side of the mountain. 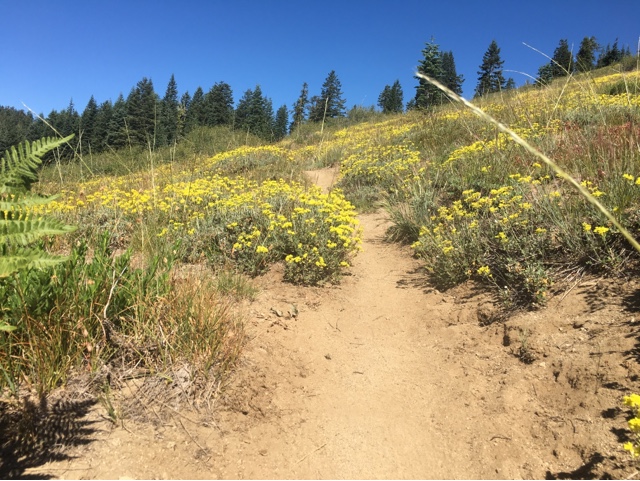 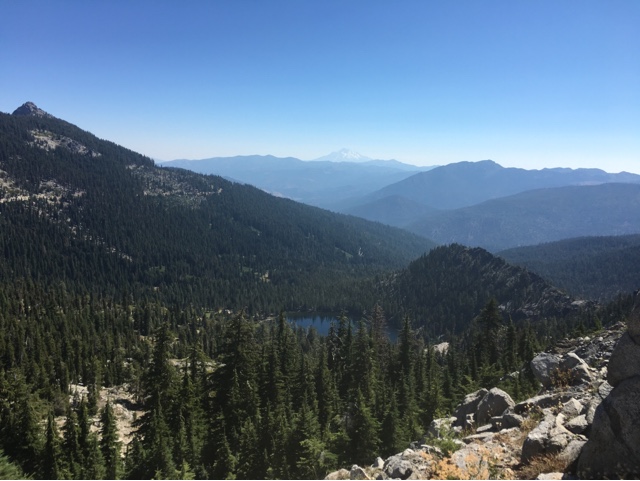 View from the ridge
Once again I dropped back down several hundred feet and followed the contours of the mountain. This time, however, I walked through a very large burn area. It has been awhile since I've walked through a burned out area. I'm not sure how recent the fire in this area was. There was no new growth so it couldn't have been too long ago. 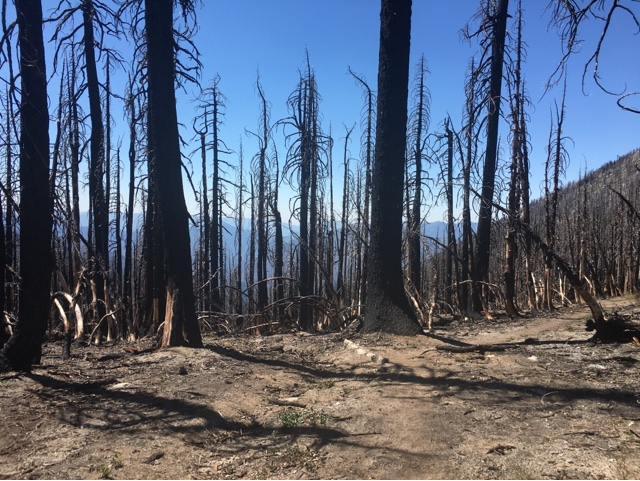 Desolation
I took a break here to fuel up before my last climb of the day. There was zero shade here, but there was a nice breeze. The climb didn't look to bad on my elevation chart, but it sure felt difficult. Looking back on it, I think it was more of a mental challenge than a physical one. Some days are harder than others for a variety of reasons. After all of the miles I have hiked I can't always figure out how to make things better. I'm pretty sure I was a little dehydrated, low on calories, and sleep deprived. The calories were an easy fix. I have one of my hipbelt pockets filled with a snack bag containing skittles, sour patch kids, and sour gummy worms. It is easy to munch on while I hike so I don't have to stop. I call it my calorie drip. I was running a little low on water, but there was a decent source only a few miles away. I planned on drinking my fill there and carrying a little extra for the remainder of the climb. Unfortunately, I couldn't do anything about the sleep deprivation. 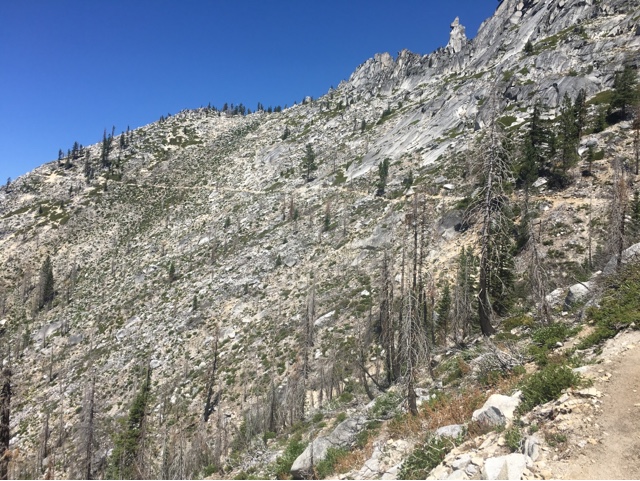 A look at where I'm heading 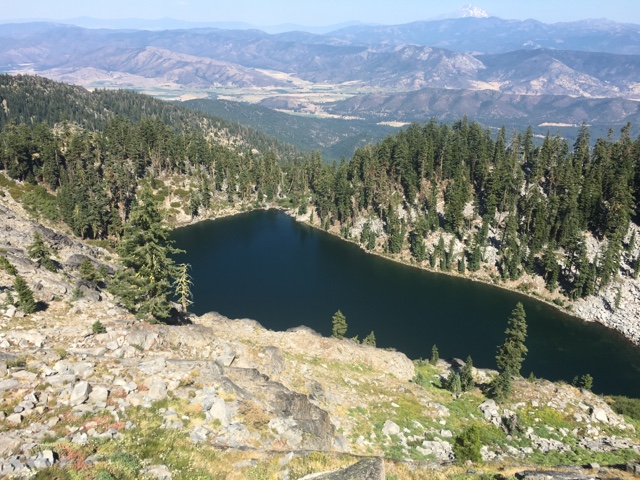 View on the way back down
The hike down to the road was nice and gradual. Usually the downhill destroys my knees, but today was a good downhill day. I made it to the road a little before five o'clock. Two hikers were already there. They had been waiting thirty minutes and no cars had driven by yet. I found a small patch of shade and sat down. One of the hikers is going SOBO so I pumped her for information of what is coming up. Oregon sounds lovely!
After waiting almost one hour, not one but three cars all stopped for us at the same time. I ended up in a Ford Explorer with a lady, her two toddlers, and her mother. They were amazingly friendly. Every time they drive on this road they always pick up hikers. According to them 90% of the residents of Etna stop for hikers. Thanks people of Etna! We appreciate you!
I was dropped of at a hostel called, The Hiker Hut. The owners of Alderbrook Bed and Breakfast saw a need to provide an inexpensive place for hikers to stay. They opened up the hostel as a side business to the B&B eleven years ago. For twenty dollars I was given a towel, shower, laundry, loaner clothes, and a bike to get around town on. I throughly enjoyed staying there. I road the bike to the market and bought a few items to add to my mail drop. Then I road down to a restaurant called, Dotty's, for a burger, fries, and milkshake. The food was good and it seemed to be a locals hangout. I made it back to the hostel just before dark. I showered and started my laundry. Since I didn't get in until after six o'clock, by the time I finished all of my chores it was almost midnight. So much for catching up on my sleep. It didn't help that there was an extremely rude group of hikers who were up until midnight being super loud and obnoxious. I'm hoping to get up and back on the trail as early as possible. I have not been doing very good about that lately. Hopefully I can set a new trend for myself.
"Every day, think as you wake up, today I am fortunate to be alive, I have a precious human life, I am not going to waste it. I am going to use all my energies to develop myself, to expand my heart out to others; to achieve enlightenment for the benefit of all beings. I am going to have kind thoughts towards others, I am not going to get angry or think badly about others. I am going to benefit others as much as I can.”
― Dalai Lama
Posted by Yoda at 8:19 AM