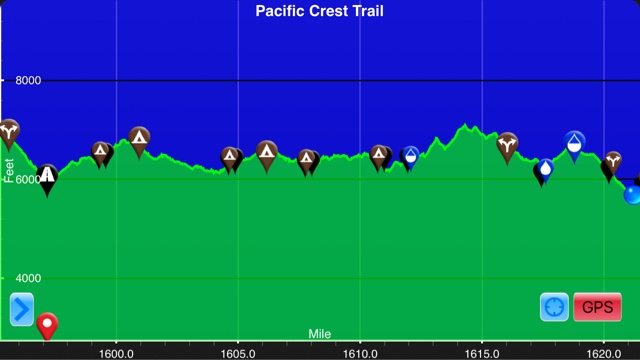 Total up/down: +4689/-4950
I was very determined to get out of town and back to the trail at a respectable hour. I have really been slacking in this department on this hike. I think the reason it was easier on the Appalachian Trail was because the towns were located much closer to the trail. It is much more difficult to get out of town early when you are thirty to forty minutes away. The nice lady who gave me a ride into town last night said she could probably take me back to the trail in the morning. She said that she would drive by around 7-7:30 and see if I needed a ride. I was up and ready to go by 6:45. I waited outside of the hostel until almost eight o'clock and she never drove by. In fact there wasn't very much traffic at all. I think only two cars drove past in that period of time. Both cars actually stopped or slowed down to explain that they weren't going that far. Etna is such a friendly town. Around 8:15 two guys in a truck pulled over to invite me to breakfast with them and then they would take me back to the trail. I thanked them profusely, but I had to decline. As I said earlier, I was determined to get back on the trail at a respectable time. Within minutes another truck went by, but it was going in the other direction. I put my thumb out anyway and the guy actually stopped for me. He said he wasn't doing anything important and had some time to kill. He didn't mind going twenty four miles round trip out of his way to return me to the trailhead. Wow, citizens of Etna, I applaud you. You are one of the most hiker friendly towns on the entire PCT. I didn't start hiking until almost 9:30, but that is way better than I have been doing.
For once I didn't have a horrible climb out of town. It seems like I always drop thousands of feet in elevation to go into town, only to gain that elevation back leaving town. Within a few miles of hiking I crossed the 1,600 mile mark. I was on really rocky terrain so I didn't have high hopes of a mileage marker being made already. Quite frankly I couldn't see how you could make one in those conditions, but someone figured it out. 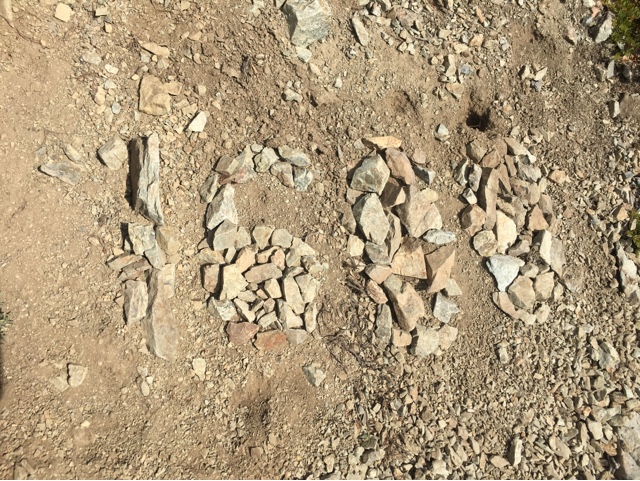 Rocky 1,600 mile marker
Shortly after crossing the 1,600 mile marker I entered into the Marble Mountain Wilderness. The Marbles were really something to behold. The mountains were giant hills comprised of marble. I was a little disappointed to find  out that they weren't mountains made of glass marbles. 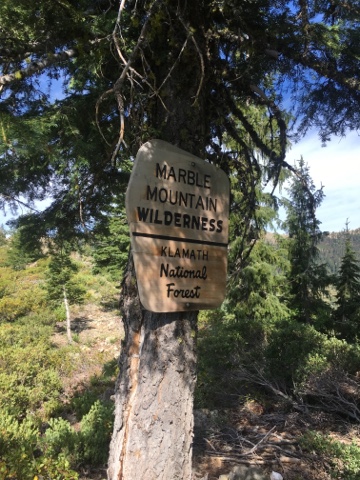 The Marbles
I ended up taking a lot of breaks today. I had only been hiking a few hours when I caught up with, Action Jackson. I haven't seen him since just before Burney Falls. We took a long break together and spent the rest of the day leap frogging each other. I was running a little low on water, but I was too lazy to walk .25 miles off trail to refill. I decided to push on to the next source which was three miles away. It wasn't my best decision. The water source I bypassed was an ice cold spring, whereas the water I collected was from a lake outlet. It was a little murky so I used my filter instead of bleach. This section has a lot of downed trees blocking the trail. I lost a good bit of time hopping over them or bushwhacking around. When the trail finally came out of the forest I was treated to an amazing view of Marble Mountain. I hadn't realized that the Marble Mountain Wilderness areas as so named because they are Marble mountains. 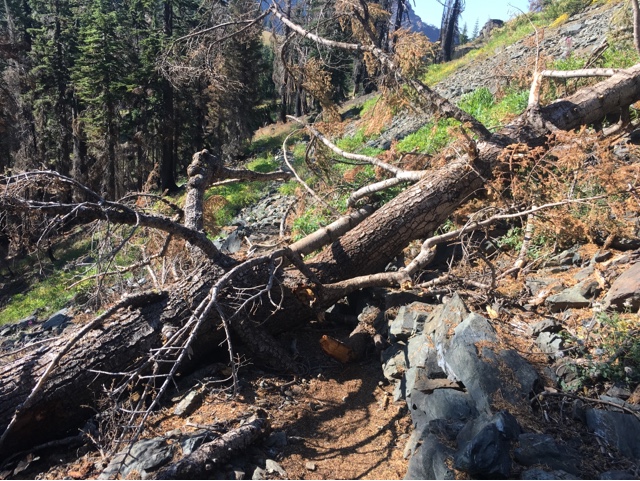 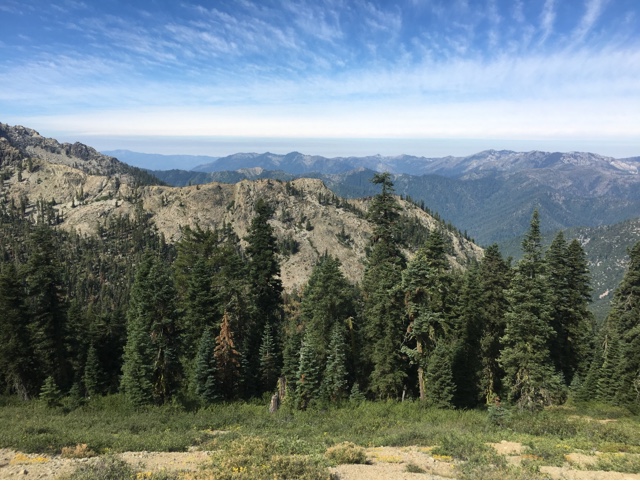 Peaks of marble
About midway through the day I happened across a nice lake. It was pretty much on the trail. I decided to take, Airlock's, advice and stop to smell the roses. I didn't go for a swim, but I did soak my feet and enjoy a Snickers bar. 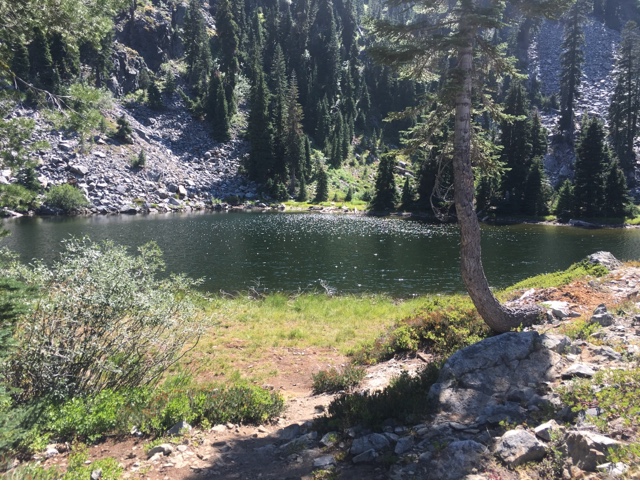 Good place for another break
I was glad that I decided to stop here because shortly after this I had a decent sized climb. The view from the top made the climb well worth the effort. 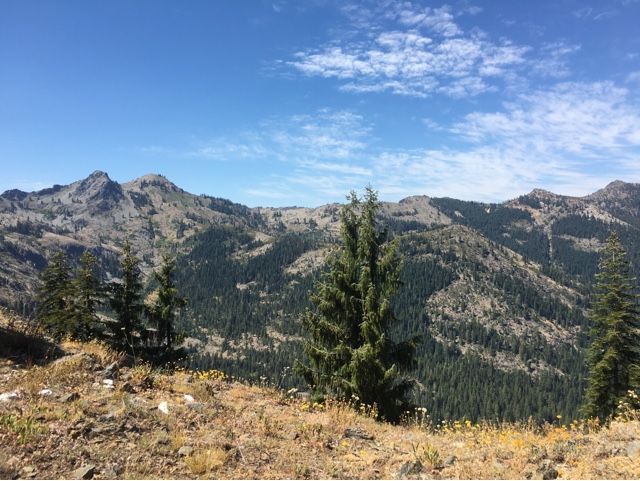 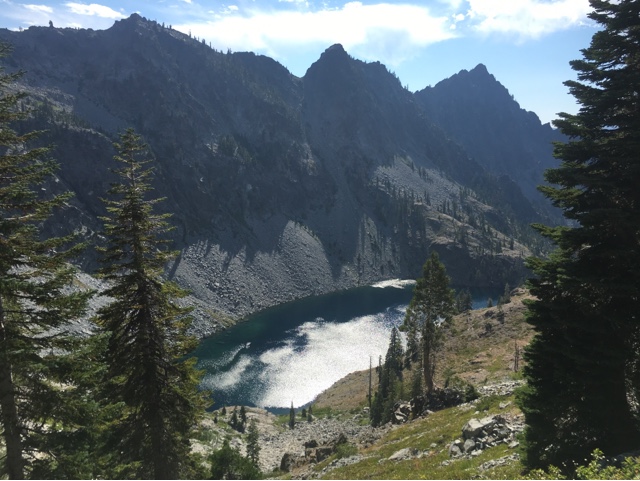 Reminds me of the alpine lakes in the Sierra
As I was walking down the mountain the terrain became very rocky. It was the kind of rocks that I hate, tiny little rocks that slash my feet. Not only were they tearing my feet up, but I was slipping and sliding everywhere. It was like hiking on marbles. After 103.75 days without falling I finally ended up on my backside. I fell in spectacular fashion. I'm guessing it looked like something out of a cartoon. My arms were flailing and my feet were trying to find purchase on the marble like rocks. One moment I was walking, the next I was laying on the ground. Luckily I wasn't hurt, but my dreams of hiking to Canada without a single slip were dashed. 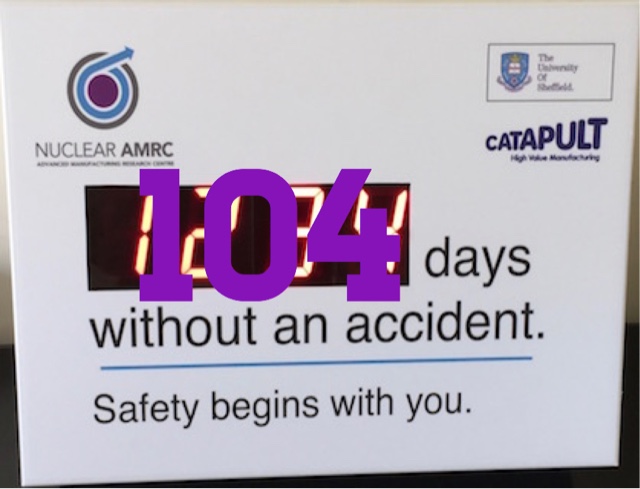 Time to reset to zero days :-( 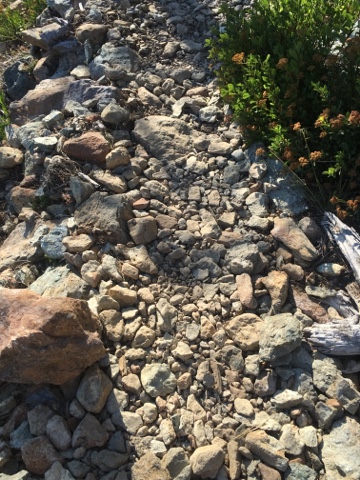 Darn rocks
I managed to make it into camp without breaking my neck. It was almost dark and I was exhausted. I decided to cowboy camp and I did not pick the best spot. As I was finishing up writing my blog I kept feeling something on my neck and arms. I though it was just my imagination until a giant carpenter ant crawled across the screen of my phone. Apparently I had set up on top of an ant hill. There was no way I was going to move all of my stuff so I just tried to ignore them. Carpenter ants don't bite so I just put my phone away and tried to go to sleep. Just as I was drifting off I heard a snorting sound very close by. I grabbed my headlamp and shined my light to where I heard the noise. I expected to see a bear, but it was just a deer. I have never heard a deer make a sound like that. It continued to prowl through my campsite for a good portion of the night. Needless to say that between the ants and the deer I didn't sleep very well.
"The true essence of humankind is kindness. There are other qualities which come from education or knowledge, but it is essential, if one wishes to be a genuine human being and impart satisfying meaning to one's existence, to have a good heart."
- Tenzin Gyatso, The 14th Dalai Lama
Posted by Yoda at 11:08 PM