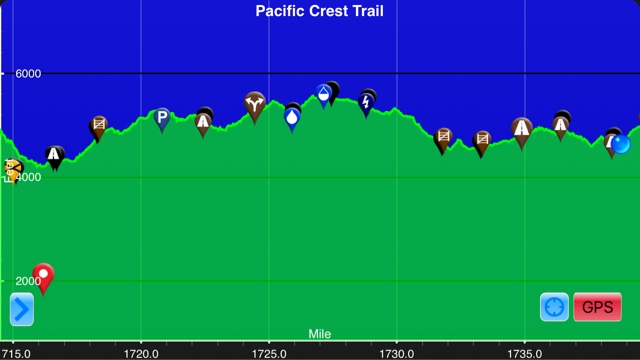 Total up/down: +4,006/-3,860 feet
I had originally planned on getting out of town as early as possible, but since I was up late last night I decided to sleep in a little. I want to start Oregon well rested. I woke up at eight o'clock and finished packing up. I thought about going out for breakfast again, but I had second thoughts. The last few times I had breakfast before hiking out of town ended badly. I ate way too much and was really sluggish and had problems making my miles. I ate my usual breakfast of a poptart and drank my carnation essentials mix. Before heading out of town I had to go to the store and buy some bleach. I tried to get some from house keeping at the motel, but they didn't have any. I had to buy a large bottle from the convenience store. All I needed was a few ounces so I gave the rest of the bottle to the convenience store clerk.
I was in the wrong part of town to try hitching back to the trail so I took the bus up to the interstate. I got as close as I could to the on ramp and tried to hitch from there. I wasn't having much luck so I walked closer to a gas station right next to the on ramp. Within minutes somebody leaving the gas station stopped. They were going past the exit I needed to get dropped off at and didn't mind stopping there. It was a quick drive and I was thankful that they stopped for me. They had never even heard of the pct.
I was back on trail by 10:30. It was going to be another hot day. Ashland is in the middle of a heat wave and the weather forecast called for a high of 106 degrees. I was hoping that Oregon would have more water than Northern California, but so far that doesn't seem to be true. The one positive thing is that so far I'm walking through the forest more, which means more shade. It didn't feel too terribly hot out. 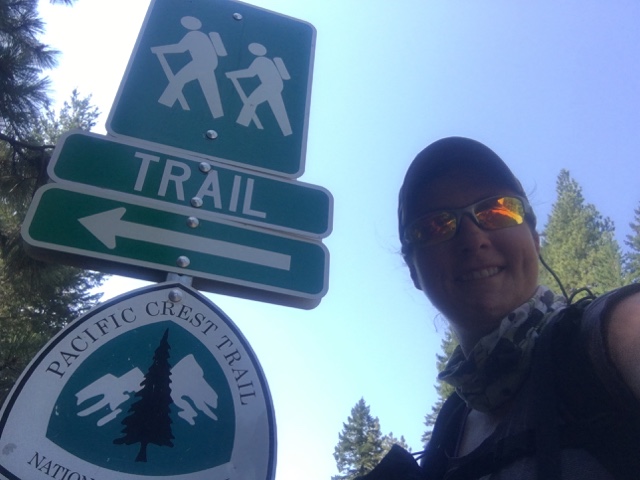 Here we go again
I was hoping to hike thirty miles today, but with the late start that did not seem likely. When I stopped for my first break I looked to see what my options were. If I could make it twenty-five miles I could camp at a lake with potable water, picnic tables, and a privy. I decided that was my goal. After a few hours I had to rethink my plan. I wasn't moving as quickly as I needed to. The heat and lack of water sources was slowing me down. 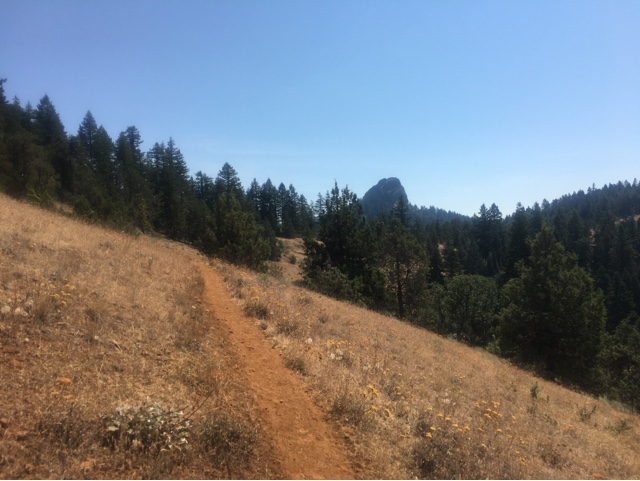 Still lots of exposed areas
I stopped for a second break around three o'clock. There was a nice piped spring with a bit of shade close by. I mixed up some Gatorade and tried to come up with a backup plan in case I couldn't make it to the lake. While I was trying to decide what to do another group of hikers joined me. It is common practice to see what each others plans are. I explained where I was trying to make it to, but I told them I wasn't sure I could get to the lake before dark. They said their plan was the same, but they were taking the shortcut. I was confused. "What shortcut?" I asked. They were going to walk a dirt road that would take them to the lake in just six miles. I still had almost twelve trail miles to hike to make it there. I explained that I am a purist so that wouldn't work for me. One of the guys said he was a purist as well. He tried telling me that as long as you connect continuous footsteps to Canada you are a purist. I told him he was wrong. You can't walk dirt roads just because it is easier and shorter. Let's just say that we agreed to disagree and I did not leave the conversation with a new friend. I'm all for hiking your own hike(HYOH), but to me his way is cheating. I didn't come out here to walk roads or to take the easy way out. In fact I get pretty worked up when I see people cutting miles this way. Sometimes there are alternate trails that have better views than the pct. I don't blame people for taking those. I get worked up when people cut the trail because it is easier or shorter. To me that is not what thruhiking is about. I have seen a lot of people taking the easy way out lately and it gets me upset. When they finish the trail they will tell people that they thruhiked the pct. What they will conveniently leave out is that they skipped miles. I can honestly say that I have hiked all 1,738.7 miles to date. Ok, rant over!
I was excited to listen to the new music I downloaded last night. I'm trying out some new genres of music I haven't heard before. I got some folk music and bluegrass. So far I am enjoying it. I really like this group called The Passengers. The small bit I've heard from the Lumineers is really good too. 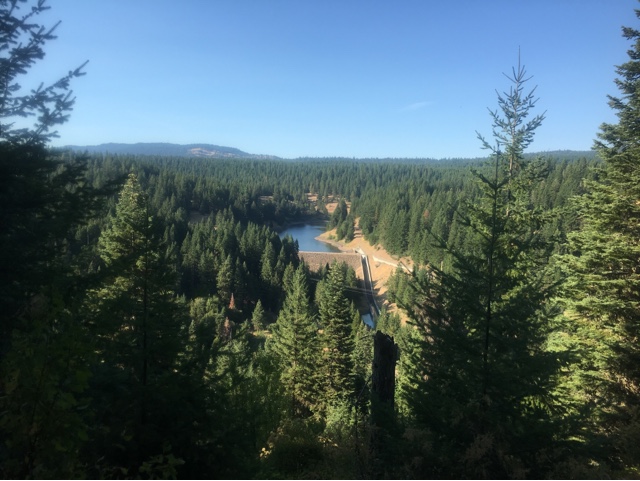 I wish I had gone closer to this lake. It looked really inviting
So far I'm really liking my new shoes. The Altra Lone Peak 3.0's are a big improvement from the 2.5's. All of the things I wish were different about the 2.5's have been fixed. It seems like Altra really listened to their customers. The mesh uppers are a tighter weave that doesn't let in as much dirt and sand. They also beefed up the sides of the mesh by adding a rubber like material. I think this change will make the shoe more durable. The heel is a tiny bit more narrow which works out well for me. My foot isn't moving around as much any more. It is way too early to say for sure, but I think my feet will be happier in this new version.
I didn't quite make it to the lake for camp. I ran out of daylight. The days are definitely getting shorter. I found a nice flat spot to stealth camp next to the lake outlet. I always try to camp close to a water source. It makes life easier and my pack lighter. As I was getting ready to cook dinner, by headlamp because it was rapidly getting dark out, the group of shortcut takers came by. They asked if they could camp next to me. I told them I didn't mind. Apparently they had taken a wrong turn on their shortcut and walked a few miles in the wrong direction. 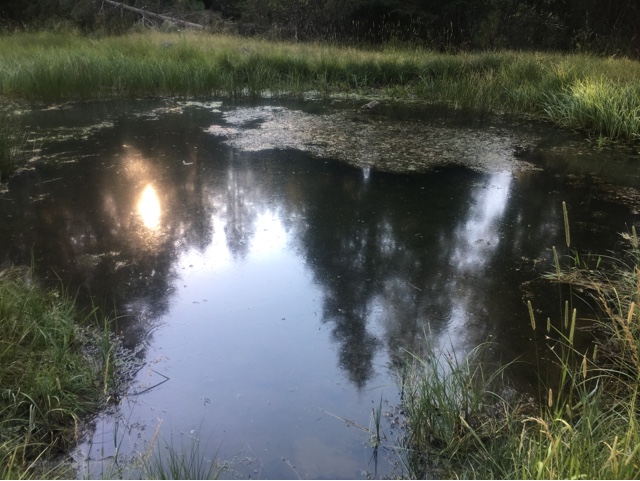 Nasty stagnant pond that I skipped just before camp 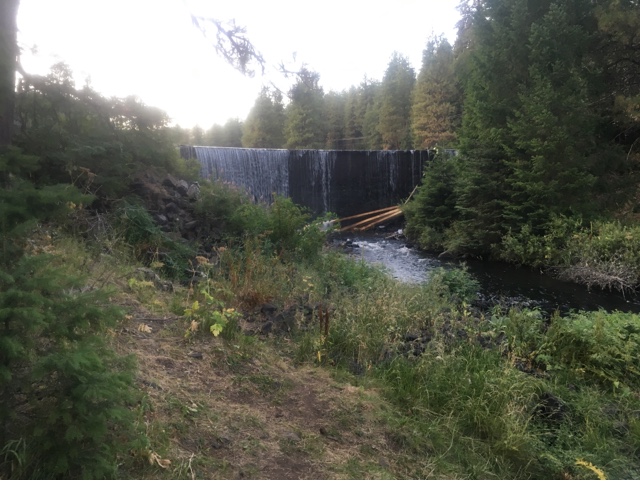 Lake outlet
Tomorrow I hope to get back on track. I hope to average 28 miles per day throughout Oregon. I will go slightly slower around Crater Lake because I don't want to rush around there. I want to really enjoy it.
"Your time is limited, so don’t waste it living someone else’s life. Don’t be trapped by dogma – which is living with the results of other people’s thinking. Don’t let the noise of other’s opinions drown out your own inner voice. And most important, have the courage to follow your heart and intuition. They somehow already know what you truly want to become. Everything else is secondary."
– Steve Jobs
Posted by Yoda at 12:17 PM