Day 96- The One With The Cool Waterfall 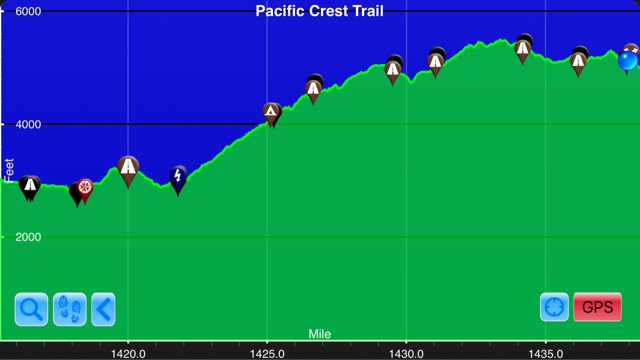 Total up/down:+4523/-2374
I intended to sleep in this morning. I was up until after eleven o'clock working on my blog. I wanted to get up around seven. I had a resupply package at the Burney Falls State Park general store and I camped just .7 miles away. The store didn't open until eight o'clock so there was no rush to get there early. I woke up at 6:15 and couldn't go back to sleep. It was really cold this morning and I must have a tiny hole in my sleeping pad because it was mostly deflated. Instead of blowing it back up and trying to go back to sleep I just got up. I took my time getting ready to leave though. On my way to the store I passed by Burney Falls. It is one of the most impressive waterfalls I have ever seen. Yosemite Falls was impressive because of the surrounding landscape and its height. Whereas Burney Falls was impressive to me because of its width. Apparently President Theodore Roosevelt called the falls the eighth wonder of the world. 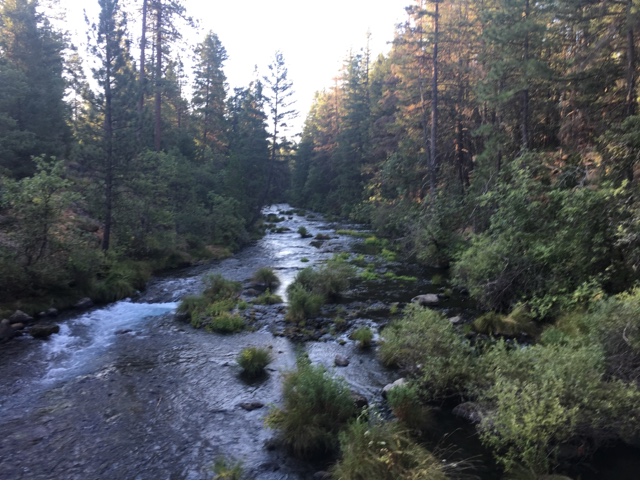 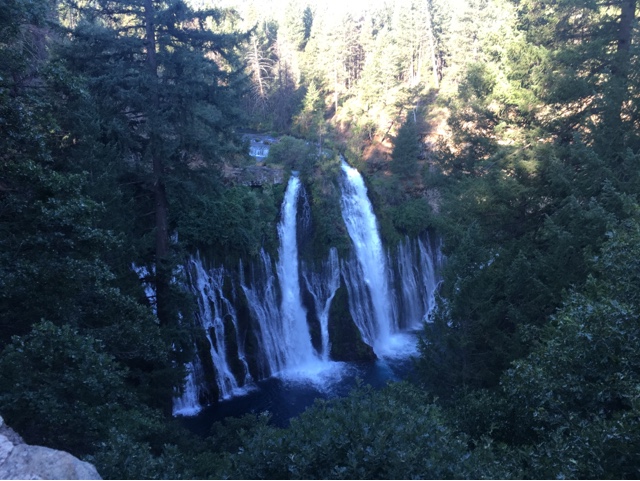 Burney Falls
I had to wait for thirty minutes before the general store opened. I tried to find an outlet to charge my GoPro and battery pack, but none of them were turned on yet. I patiently waited until almost 8:15 for them to open the store. I got my box without any difficulty. Unlike the Drakesbad package this one was intact and free from any squirrel damage. I also found a working outlet to charge all of my electronics. I repackaged some of the food in my box and put everything into my food bag. The park didn't have any cell phone reception, but I discovered that the visitor center had free wifi. I packed everything up and headed over there. I was able to post my blog, download a new audiobook, pay a few bills, and download my email. It was all very productive, but it kept me off of the trail for the best hiking hours of the day. It was ten thirty before I got started and it was already hot out. I had to readjust my plan for the day. There was no way I could make it twenty five miles. 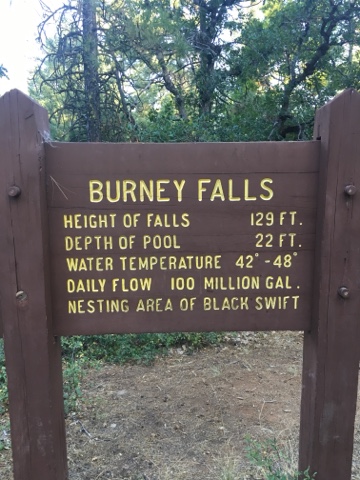 On the way out of the park I passed by an old CCC building. I am always enthralled by Civilian Conservation Corps buildings. So much of what they built in the 1930's is still around today. 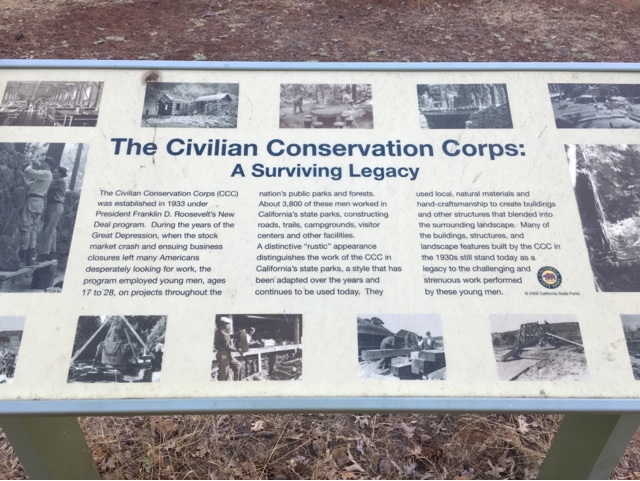 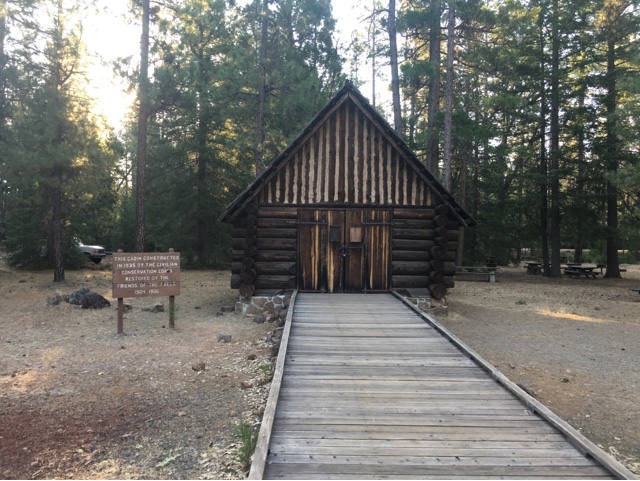 I'm a sucker for historical info
Shortly after leaving the park I hiked past Lake Britton and a really cool hydroelectric dam. Apparently some of the best trout fishing in the region takes place here. 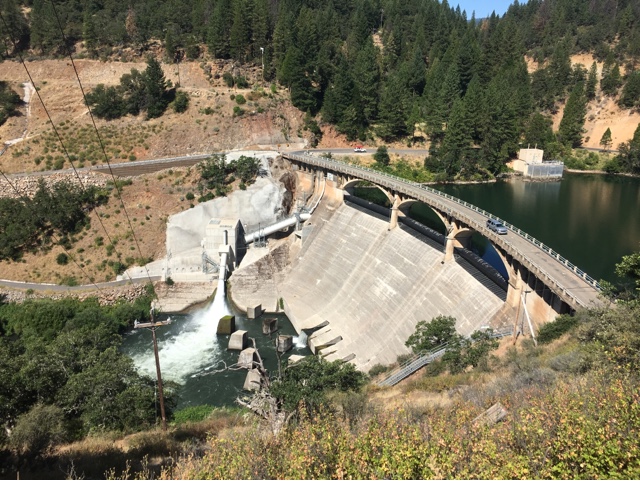 Dam
The climb up from the dam wasn't as bad as I had feared. It was pretty gradual and most of the time I was in the forest. The tree cover helped to keep the temperature manageable. I put on my new audiobook, Harry Potter and the Goblet of Fire , and zoned out for the rest of the day. My feet have really been taking a beating the last few days. The combination of new shoes, sandy, rocky terrain, and high mileage days has not been kind to my feet. I have a few hot spots that need constant tending to and one giant open sore on the top of my right foot that is constant agony. I got into a fight with a sharp stick in camp last night while wearing my sandals. Long story short... I lost the fight. The magical world of Harry Potter always takes my mind off of any physical discomfort I'm feeling. Before I knew it my day was drawing to an end. I'm close enough to Mount Shasta now that the hazy conditions arent affecting my view. It is an impressive mountain. There are no other peaks in the immediate vicinity and the surrounding mountains aren't in the same league as Mt. Shasta. I'm equally glad and sad that we don't get the chance to climb it. 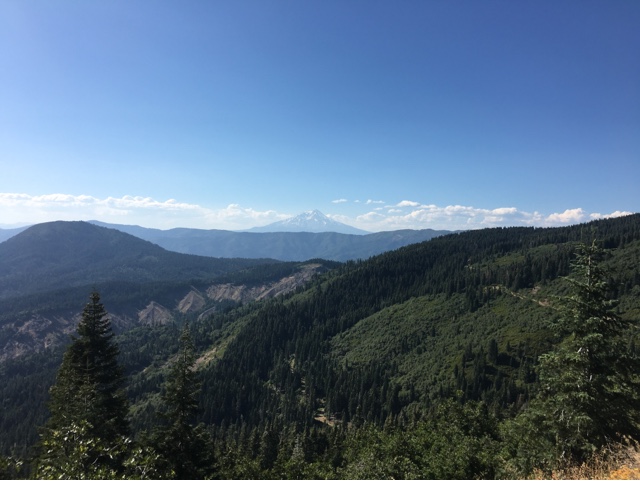 Mount Shasta
I made it into camp just before it started to get dark. My feet hurt so badly that I wasn't sure I could walk .2 miles to go get my water for the night. I summoned the rest of my energy for the short walk to the spring. The water was ice cold and I was treated to an amazing sunset on my way back to camp. 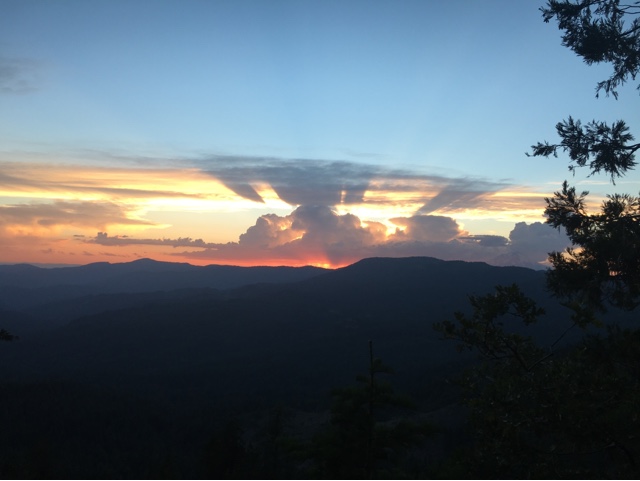 Mt. Shasta blends in with the clouds perfectly
I was up later than usual mainly because I had to deal with my feet. I used wet wipes to get off most of the dirt and grime. Then I rinsed my entire foot with hand sanitizer and applied some
Neosporin for good measure. I put on my sleep socks to keep the dirt and grime from getting back on and I got into my sleeping bag. The temperature dropped significantly as soon as the sun went down. It should be perfect sleeping weather so I decided to cowboy camp. I enjoy gazing up at the stars as I drift off to sleep.
"Remember this: Nothing is written in the stars. Not these stars, nor any others. No one controls your destiny."
-Gregory Maguire
Posted by Yoda at 3:52 PM