I had a picture in my head of how today was going to play out. I thought I had a pretty good idea of what was ahead of me. I could not have been more wrong. The first part of the day went exactly how I thought it would. Shortly after noon everything went to hell.
I woke up ready to bust out some miles. Before I even got out of my tent I heard something go running by me on the road. It was a cute little fox. She had a dead mouse in her mouth. As I watched her go by two baby foxes came out of the woods. The momma fox gave them the mouse and ran by me again, probably going to hunt for more food. It was a really cool thing to witness. I packed everything up and went to retrieve my bear bag. I was hiking by 6:30. The first 13 miles of the day flew by. I hiked on a combination of gravel and paved roads. 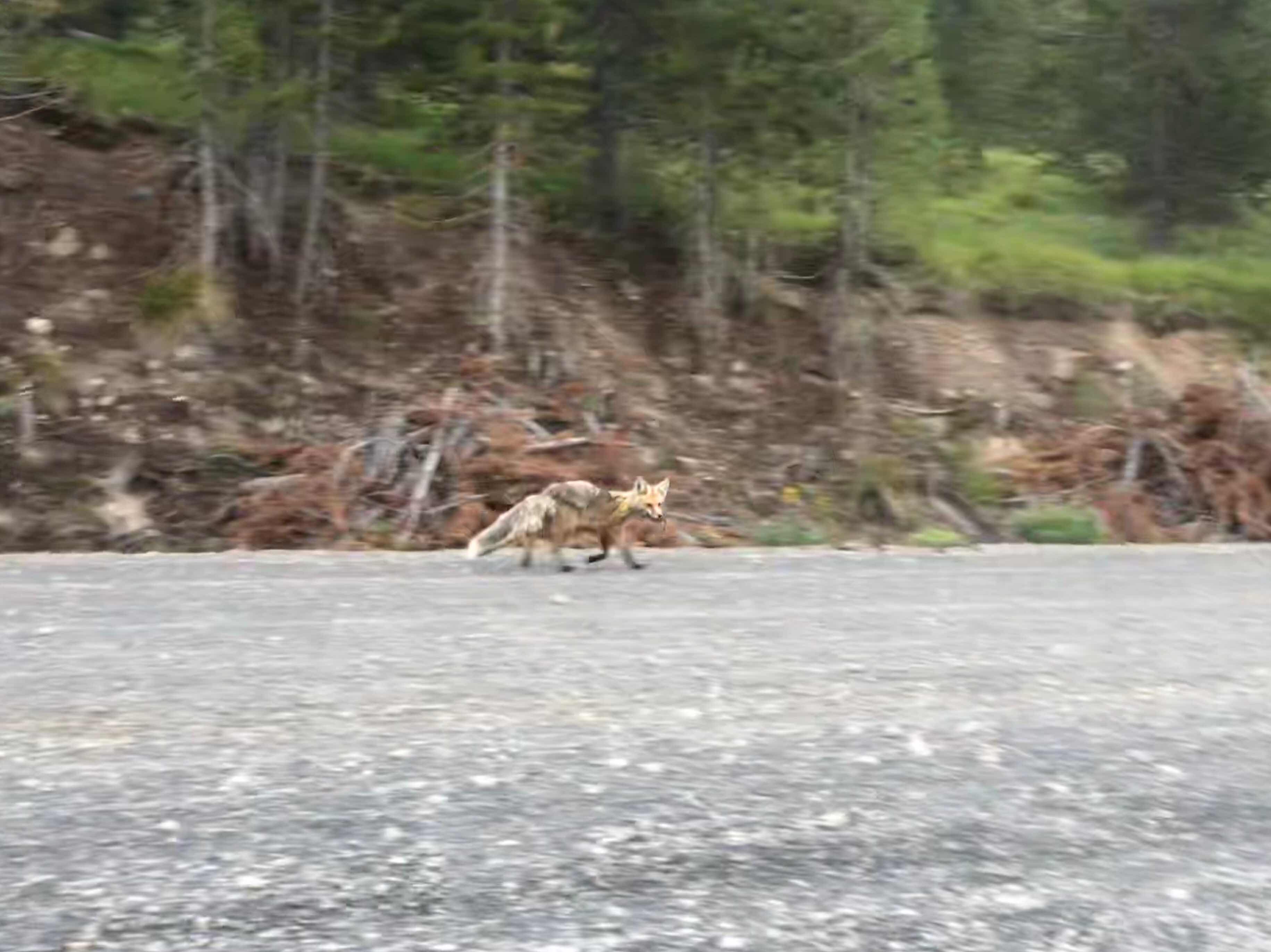 Going to feed her young 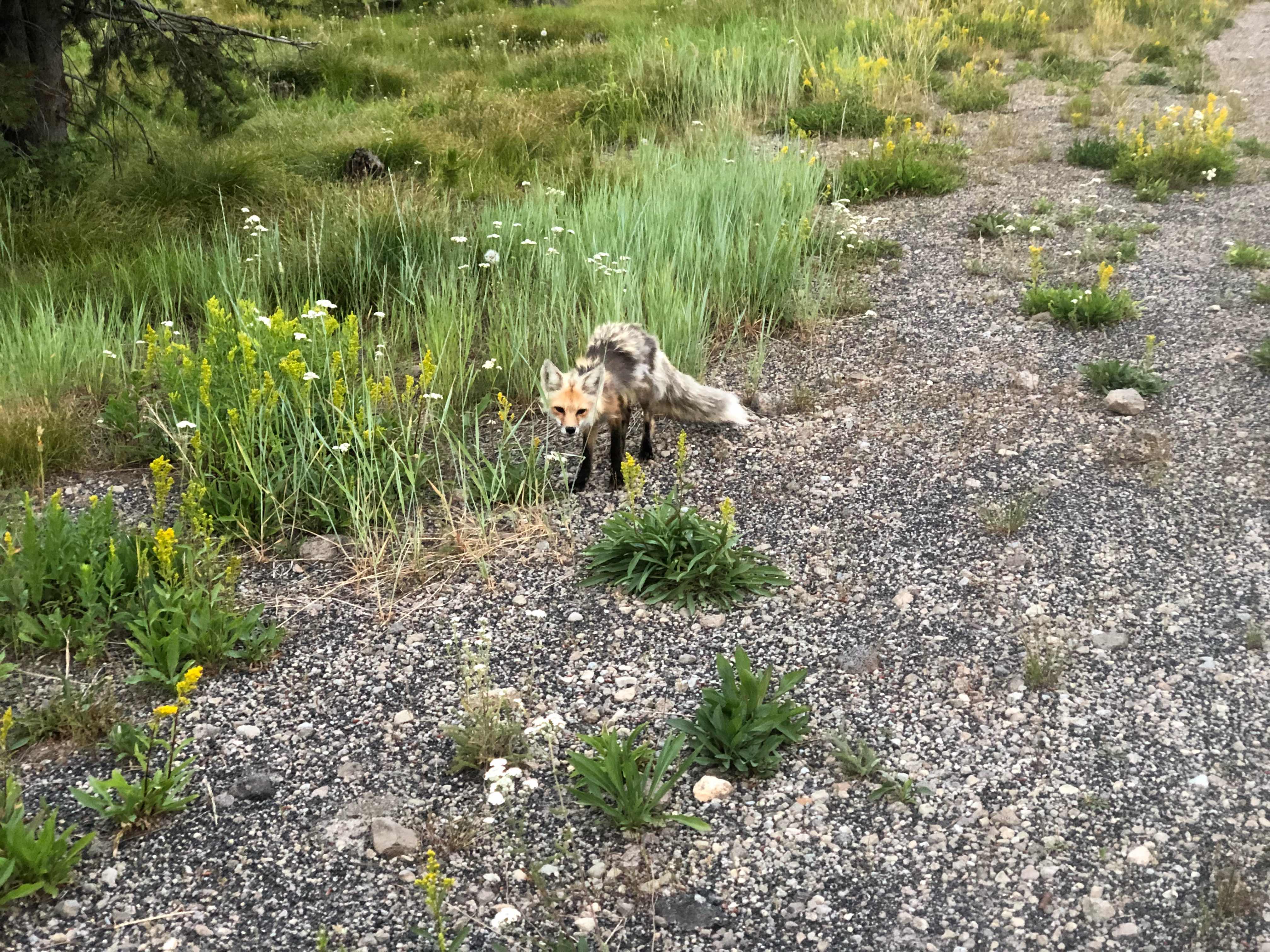 So cute
I actually had cell service for most of the morning. As I hiked I finished yesterday’s blog, I had fallen asleep while writing again. Once I finished the blog and got it posted I downloaded a new audiobook, and watched a few videos on how to hang a bear bag using two cords. This is a better method of hanging food when all you have are pine trees to choose from. Hiking on a flat gravel road made it easy to multitask. I even managed to keep up a 3.3 mph pace while I looked at my phone. At one point I looked up and saw a sign that said junction ahead. For the rest of the day I had the School House Rock song, Conjunction Junction stick in my head. This was a bummer because the only part I could remember was, “conjunction junction what’s your function.” This single line was stuck on repeat in my head for over twelve hours. 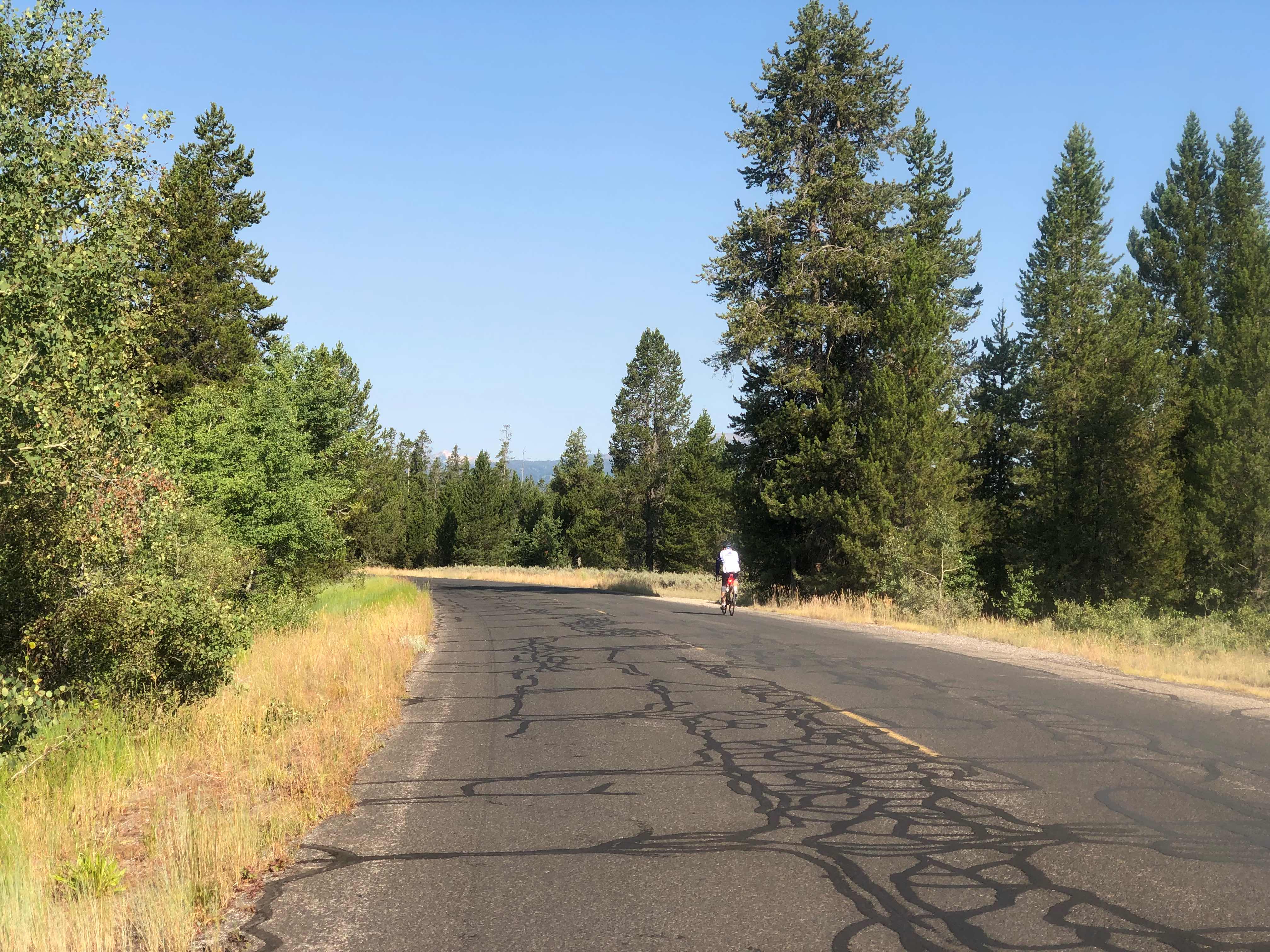 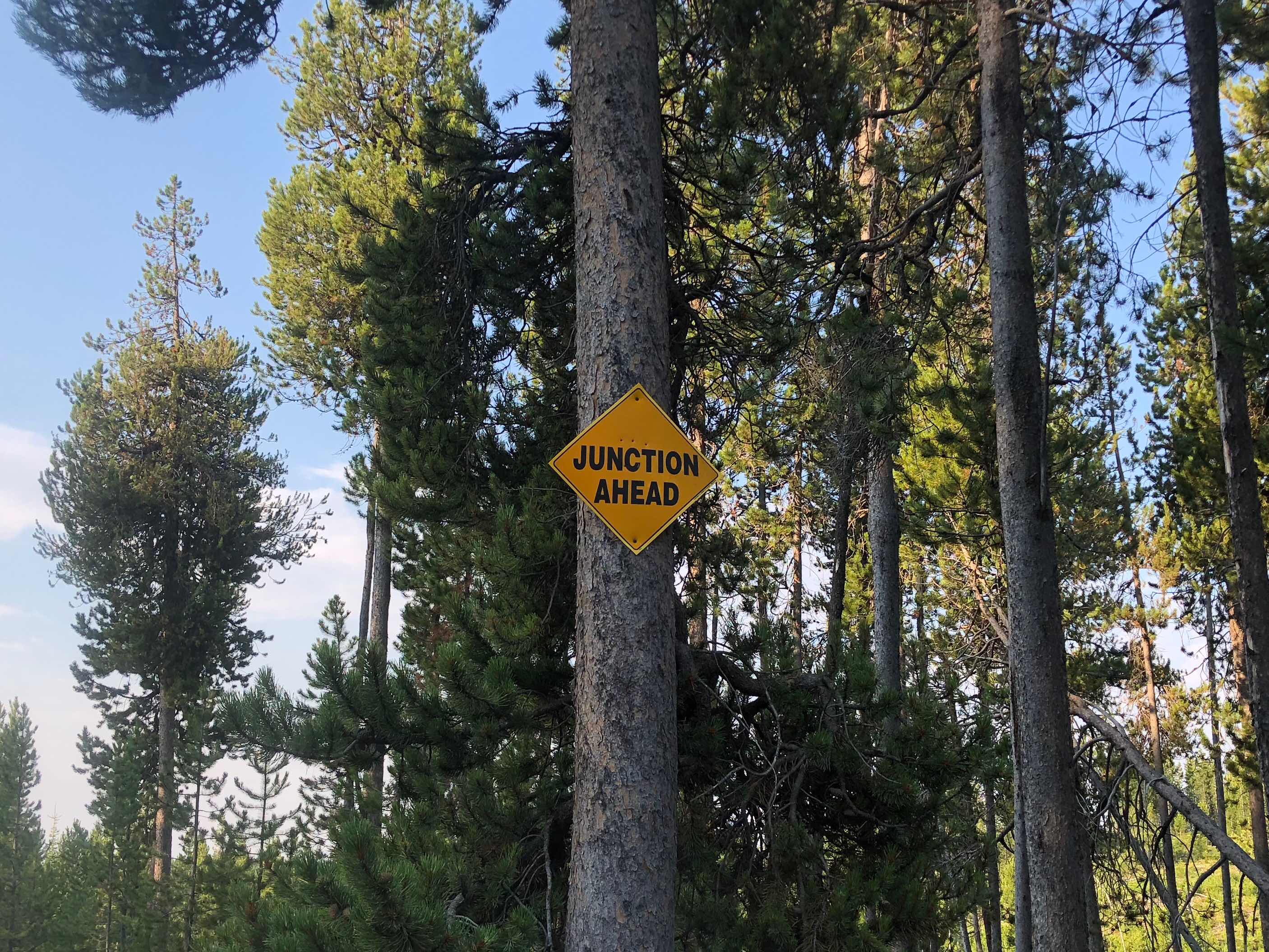 Conjunction Junction
The total surprise of the day was that I hiked past a Subway restaurant. I took a two hour break to grab lunch and charge my phone. I even packed out a foot long sub to eat for dinner. This made my entire morning. I can’t believe nobody commented on our Guthook app that the trail passes a Subway. That is definitely something every hiker should know about. 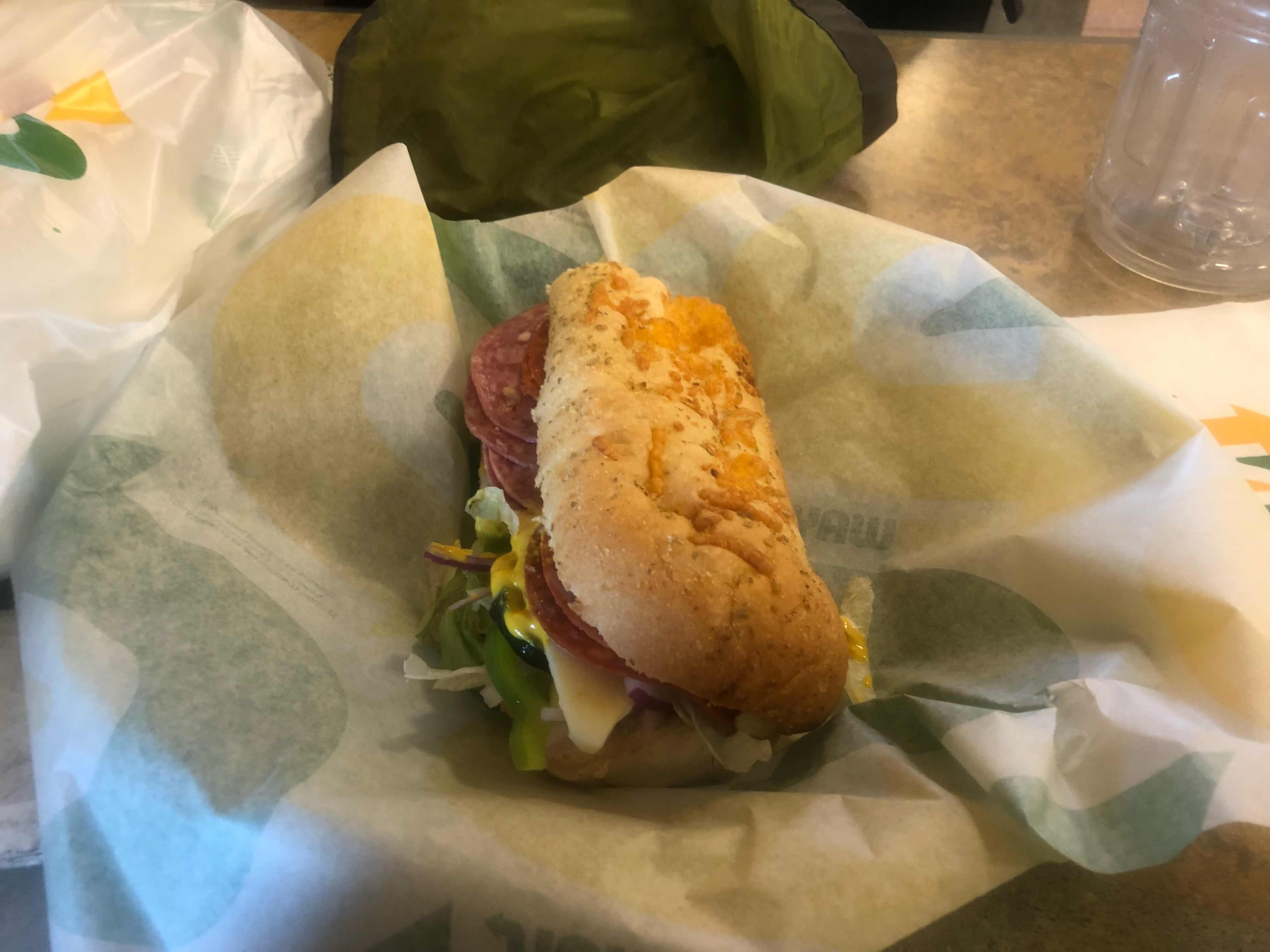 Subway
After leaving Subway I expected the day to continue to be easy and boring. I knew that I had another 9 miles on a road. What I didn’t bother checking was the elevation profile for those miles. I had a 3,000 foot climb. It was an easy climb since all of the elevation gain took place over 9 miles, but I would rather climb 3,000 feet over three miles than nine. I find long gradual climbs mentally taxing. I make things even more interesting the road changed from pavement to dirt. There was a ton of traffic along the road. Every time a car or ATV went by, and that a constant occurrence, it kicked up a giant cloud of dust. I now know where the phrase, Eat my dust came from. I quickly became frustrated and was not enjoying myself. It was really hot out and I was choking on all of the dust in the air. 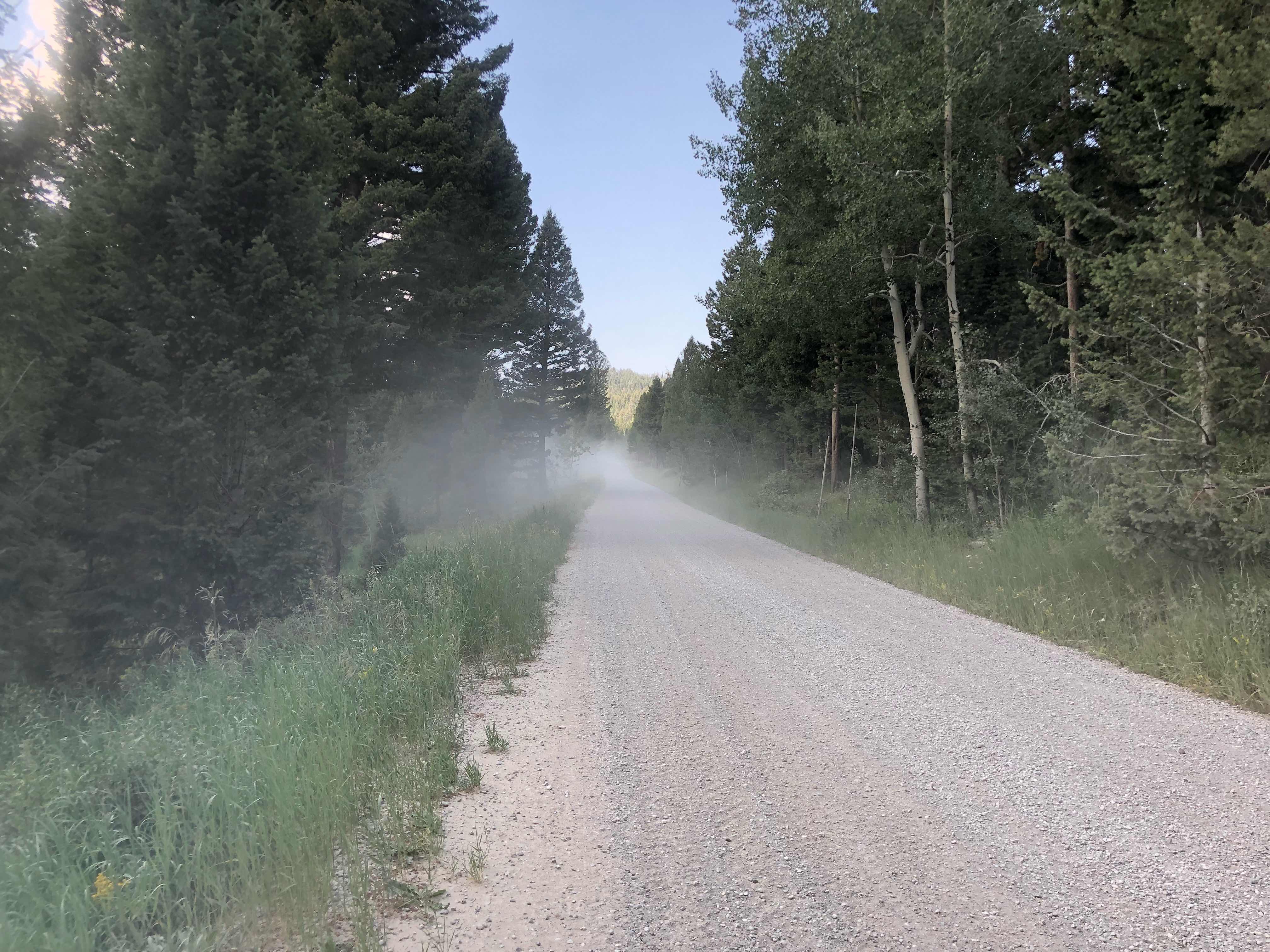 Cloud of dust after an ATV passed me.
I probably had over 250 cars, trucks, and ATVs pass me by. The one bright spot of the hike up to Sawtelle Peak was a guy that stopped and offered me some water. I had been drinking more than I had allocated because of all the dust in my mouth so I gladly accepted. He had hiked up to the peak Beira and realized how bad the dust could be. I was in a big tourist area and driving up to the peak is a poppy thing to do. The mountain has several radio and cell towers. I’m not sure what the draw for tourists to go up there other than it must be a fun drive. 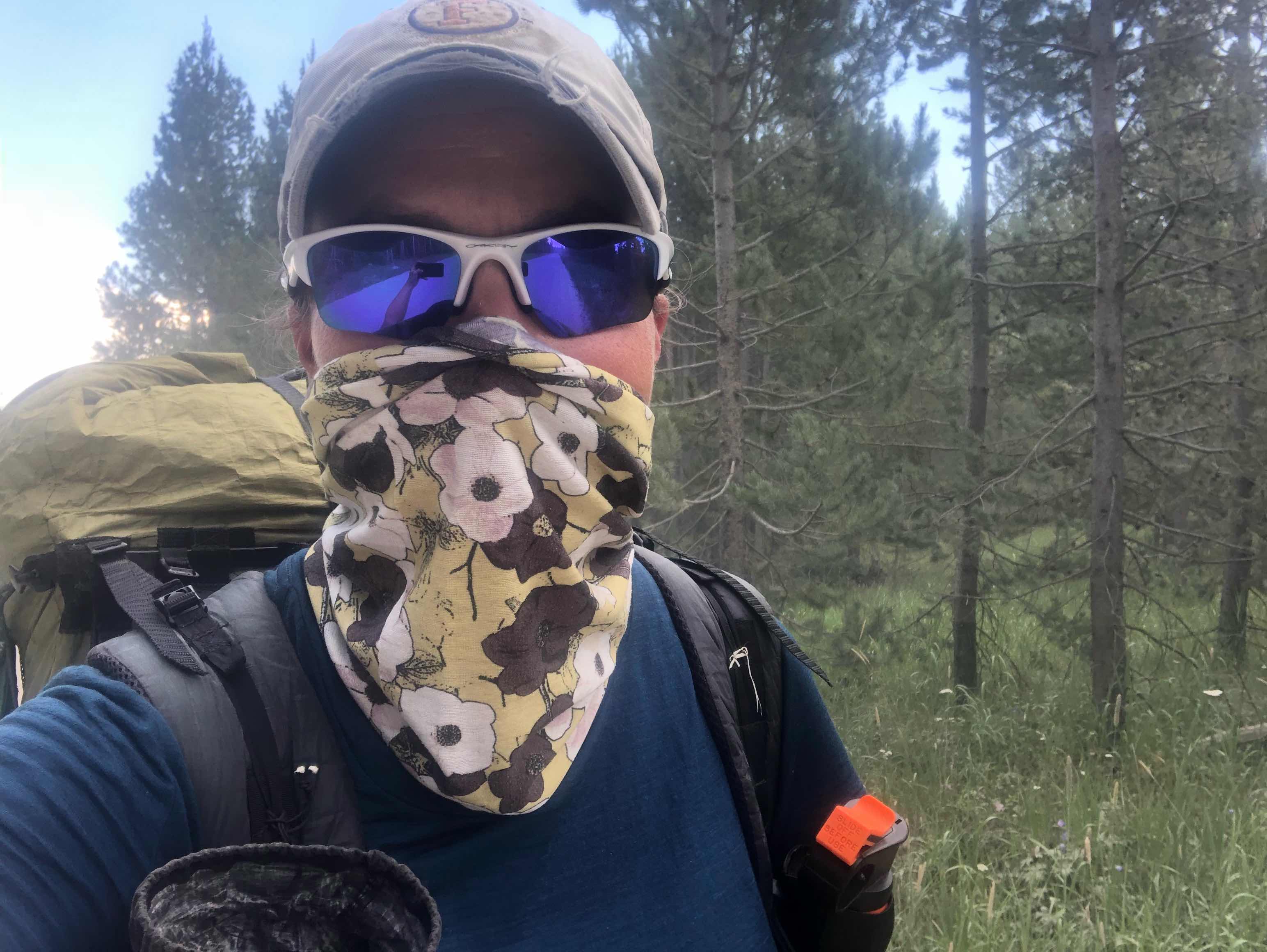 Trying to keep the dust out of my mouth 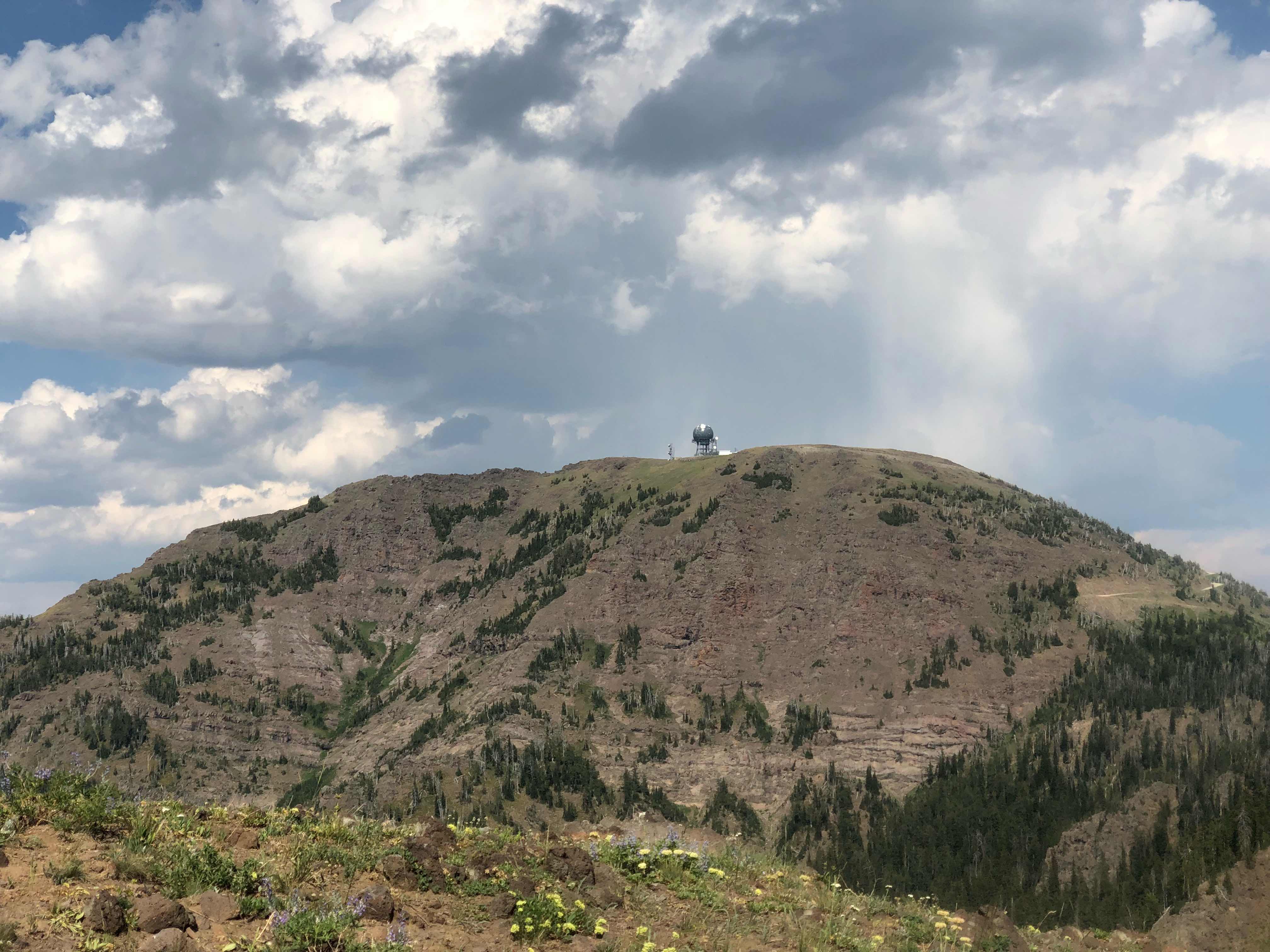 Reason I had such good cell reception today
I turned off of the road well before the actual summit. I was stoked to be hiking on actual trail again, but my excitement was short lived. I had to hike a 3.5 mile section that was described a a bushwhack. I thought I knew what that would entail, but I was not even in the ballpark. I thought it would be overgrown trail, but the trail was almost nonexistent. It should have been described as a cross country bushwhack. It took me several hours to hike three and a half miles. I got way off “trail” several times and had to backtrack. With less than a mile to go the fun really started. I had to bushwhack through willow and a bunch of creeks/streams. I had to say goodbye to my dream of having dry feet two days in a row. Of course it had to be st the end of the day so there was no chance to get my feet dry before making camp. 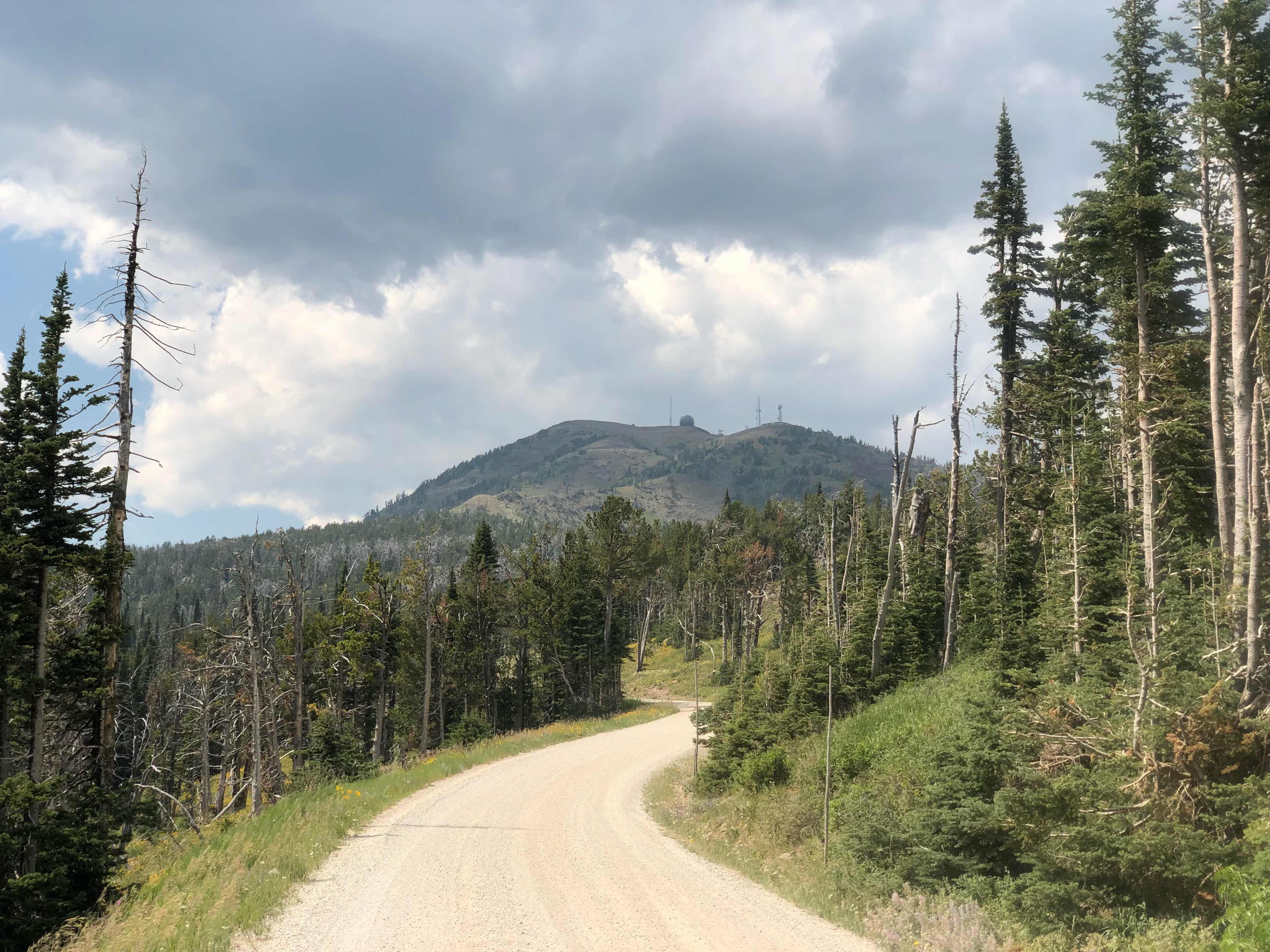 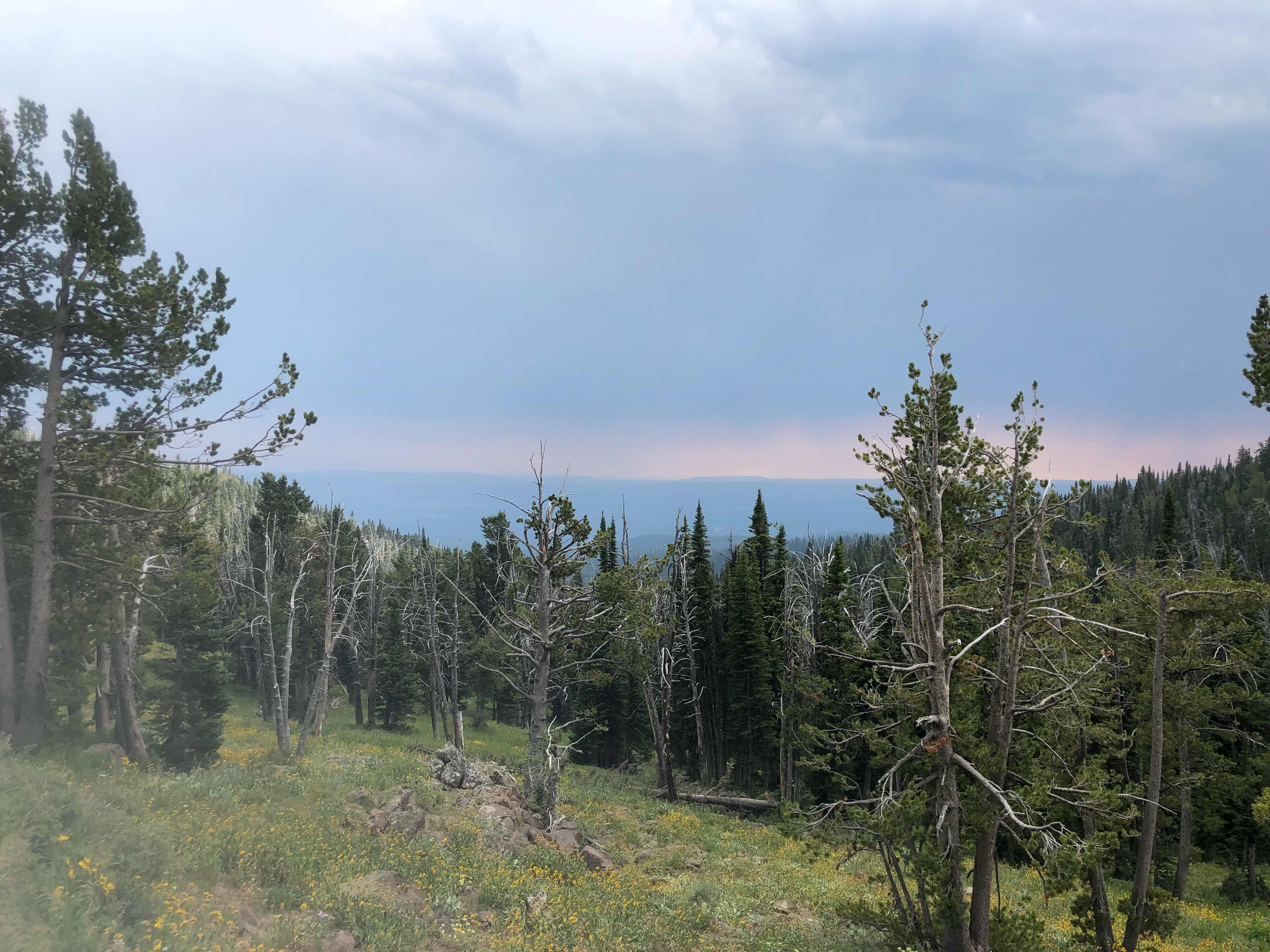 Weird sky due to a fire in the area 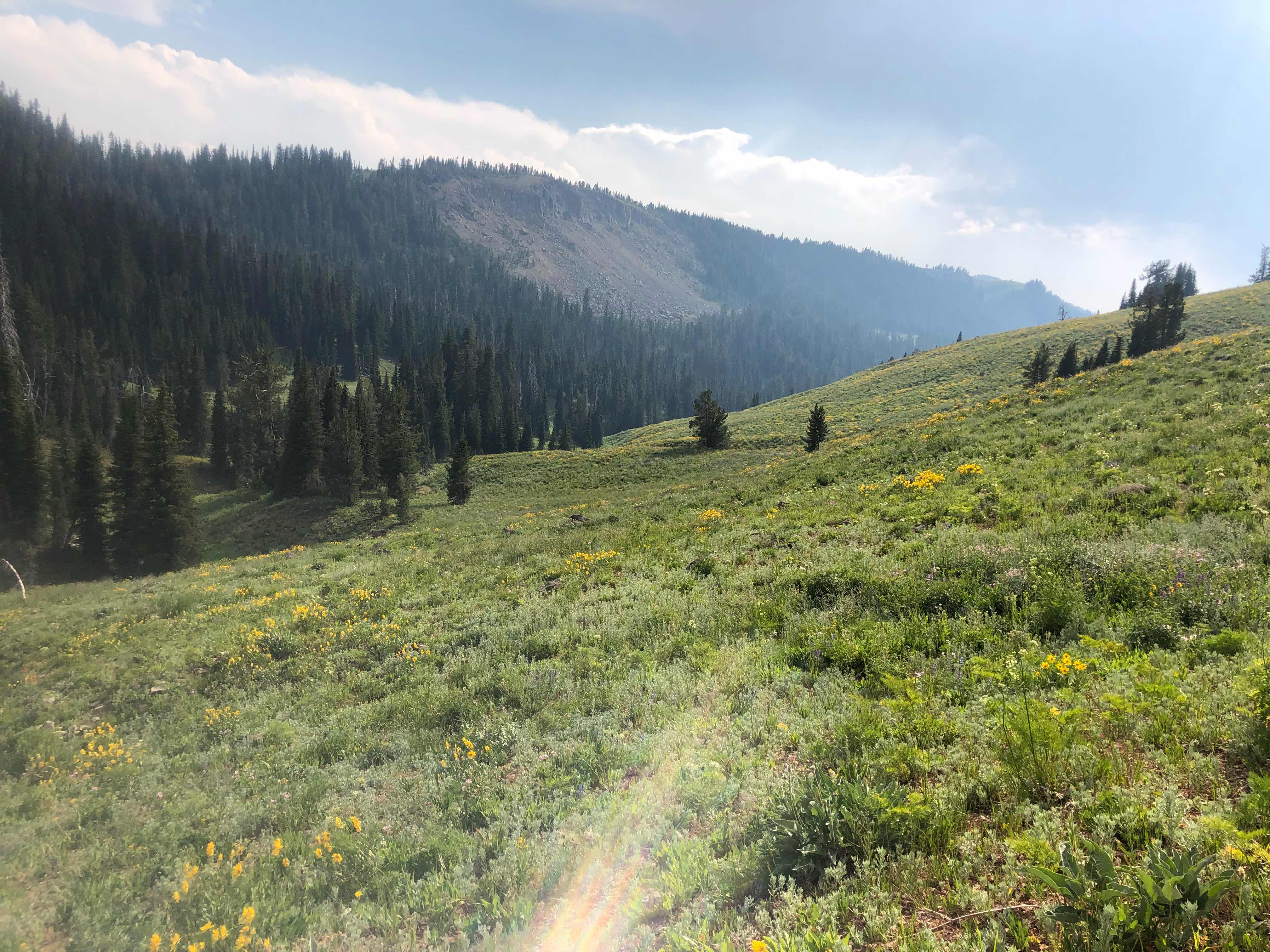 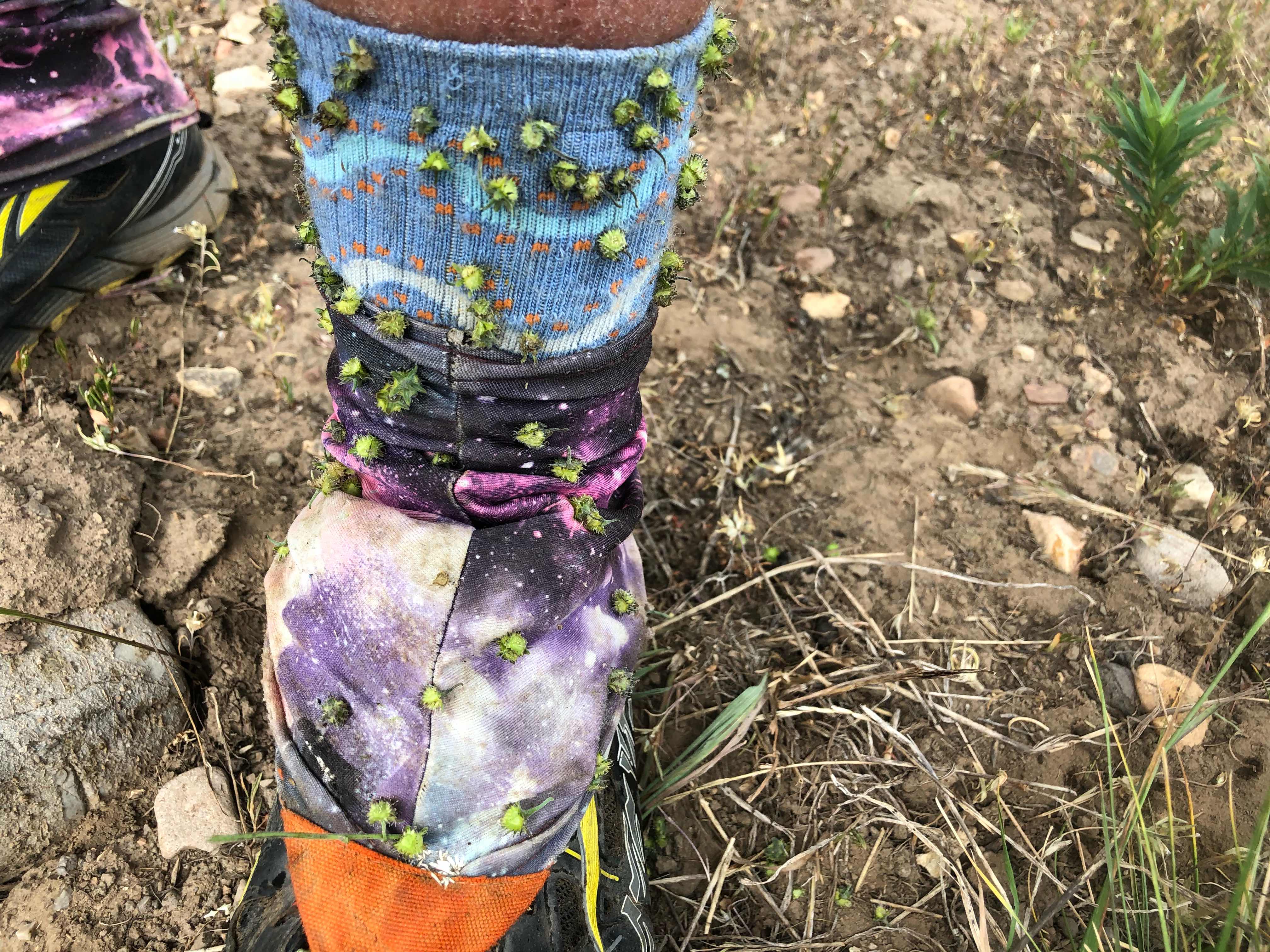 Picked up a few hitchhikers 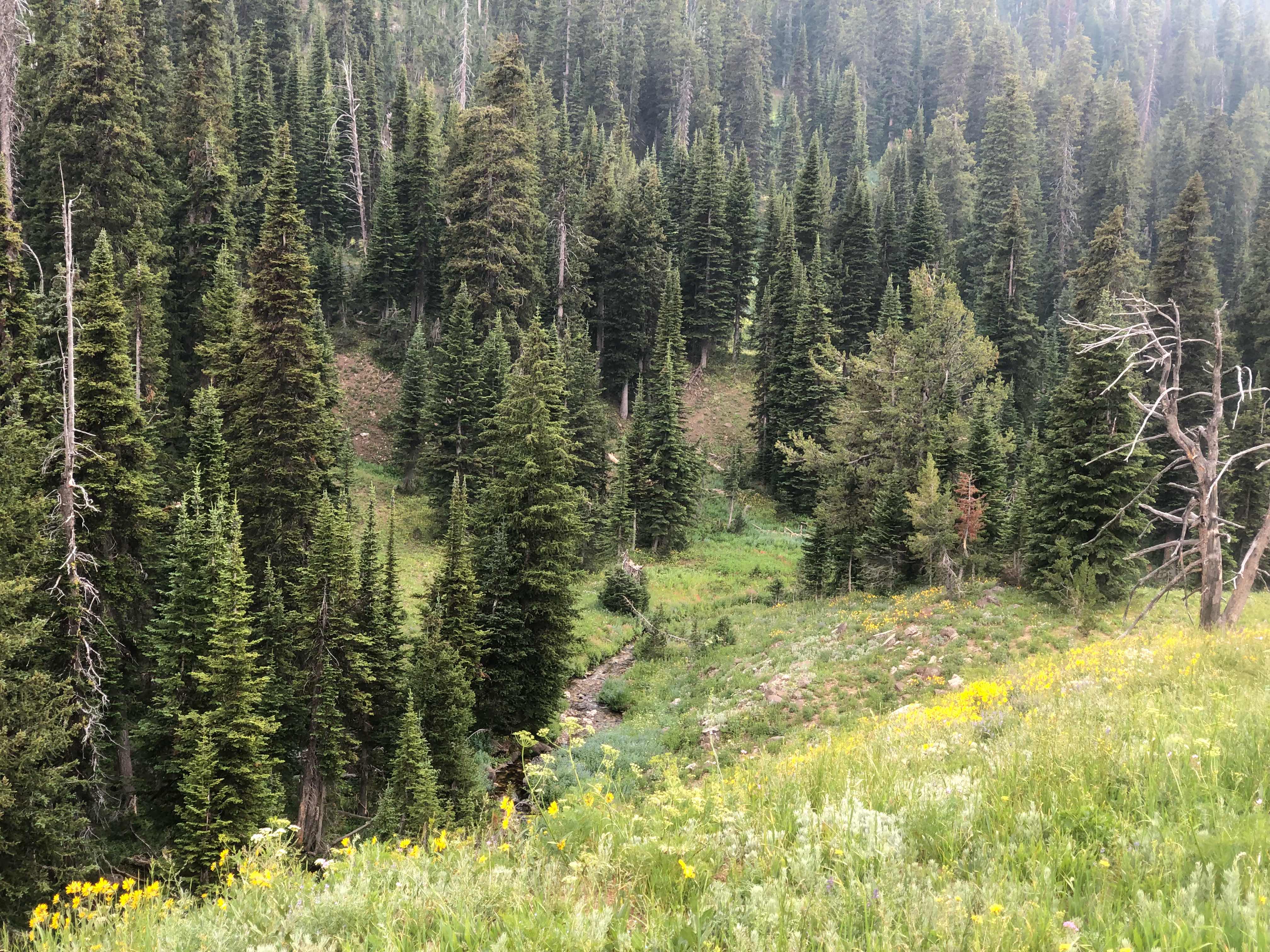 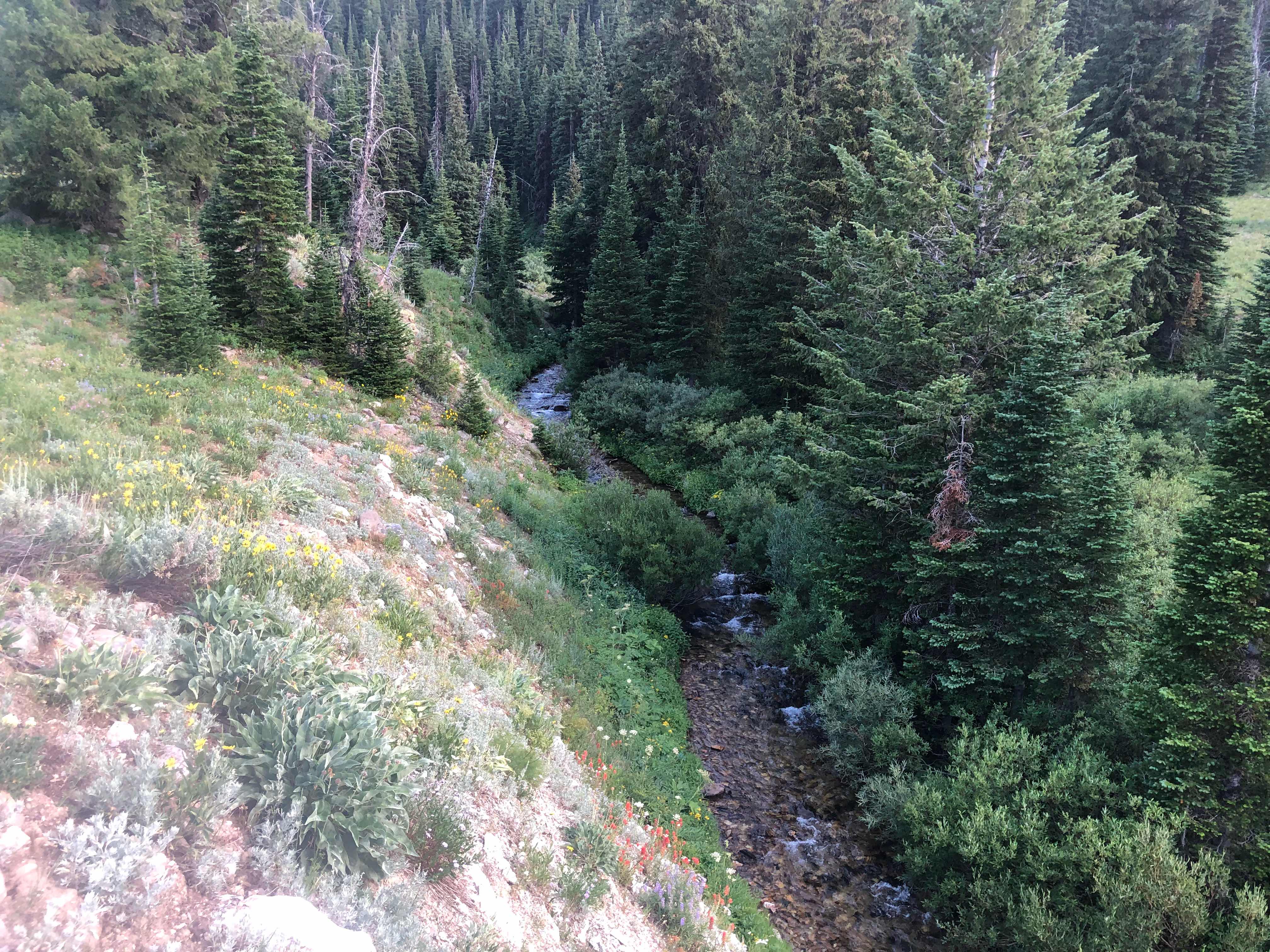 Hell Roaring Creek, most remote source of the entire Missouri/Mississippi River system
I know for a fact that I will look at my route tomorrow with more care. I don’t like surprises like the ones that cropped up today. 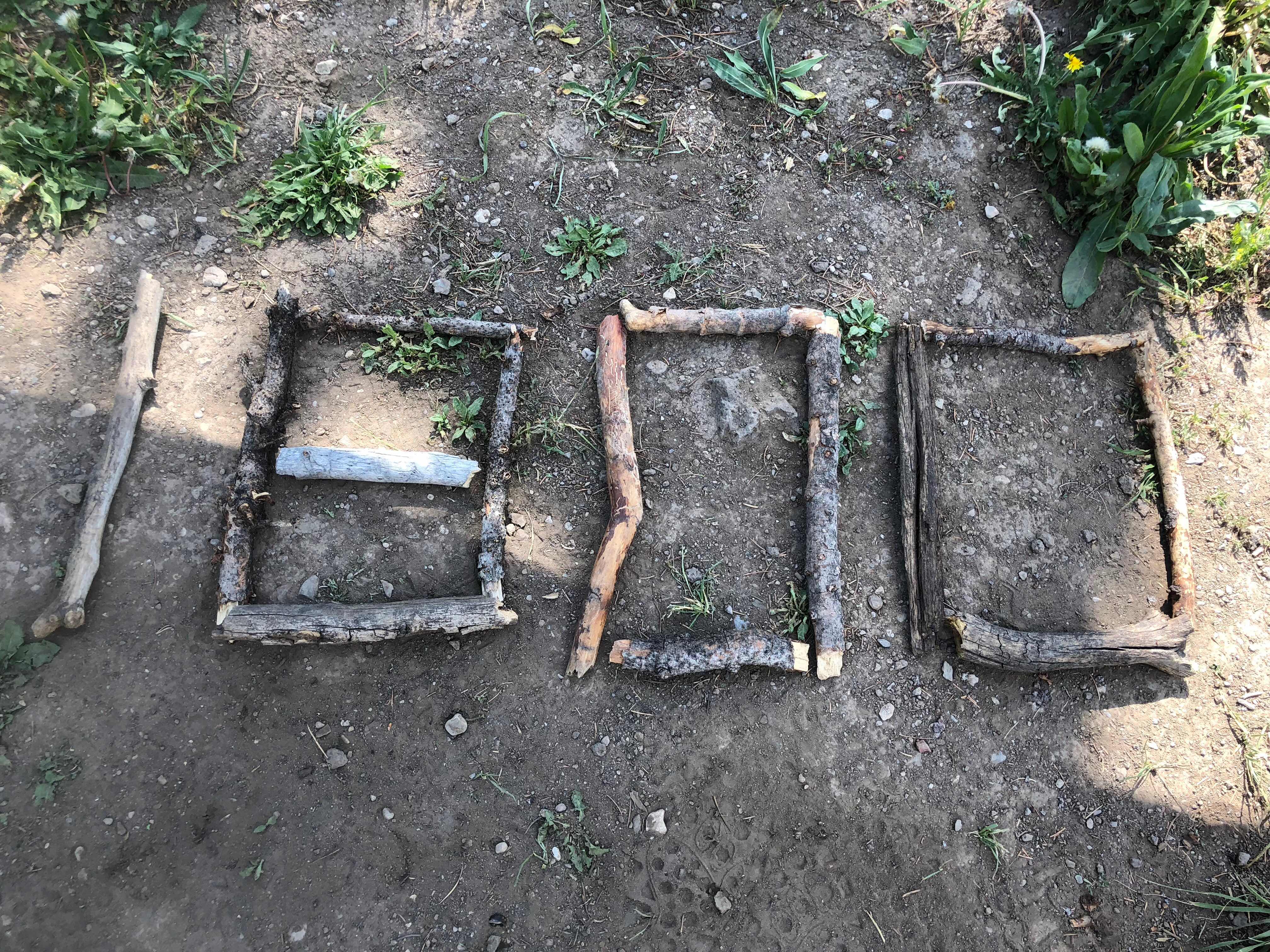 I hit the 1,800 mile marker shortly after starting out this morning
“Endurance is not just the ability to bear a hard thing, but to turn it into glory.”
- William Barclay