Day 78- What Goes Up and Down and All Around

I really expected today to be easy. I thought I would get into camp around 5:30. Oh man, I could not have been more wrong. It was a very technical day of hiking. In some areas there was no room for error. I haven’t had such a stressful day of hiking since I bailed in the San Juans. Although some areas were difficult and scary it was a glorious day. I slept in a little bit because I figured I had all the time in the world since I only had to hike 19 miles. I didn’t get started until almost seven. 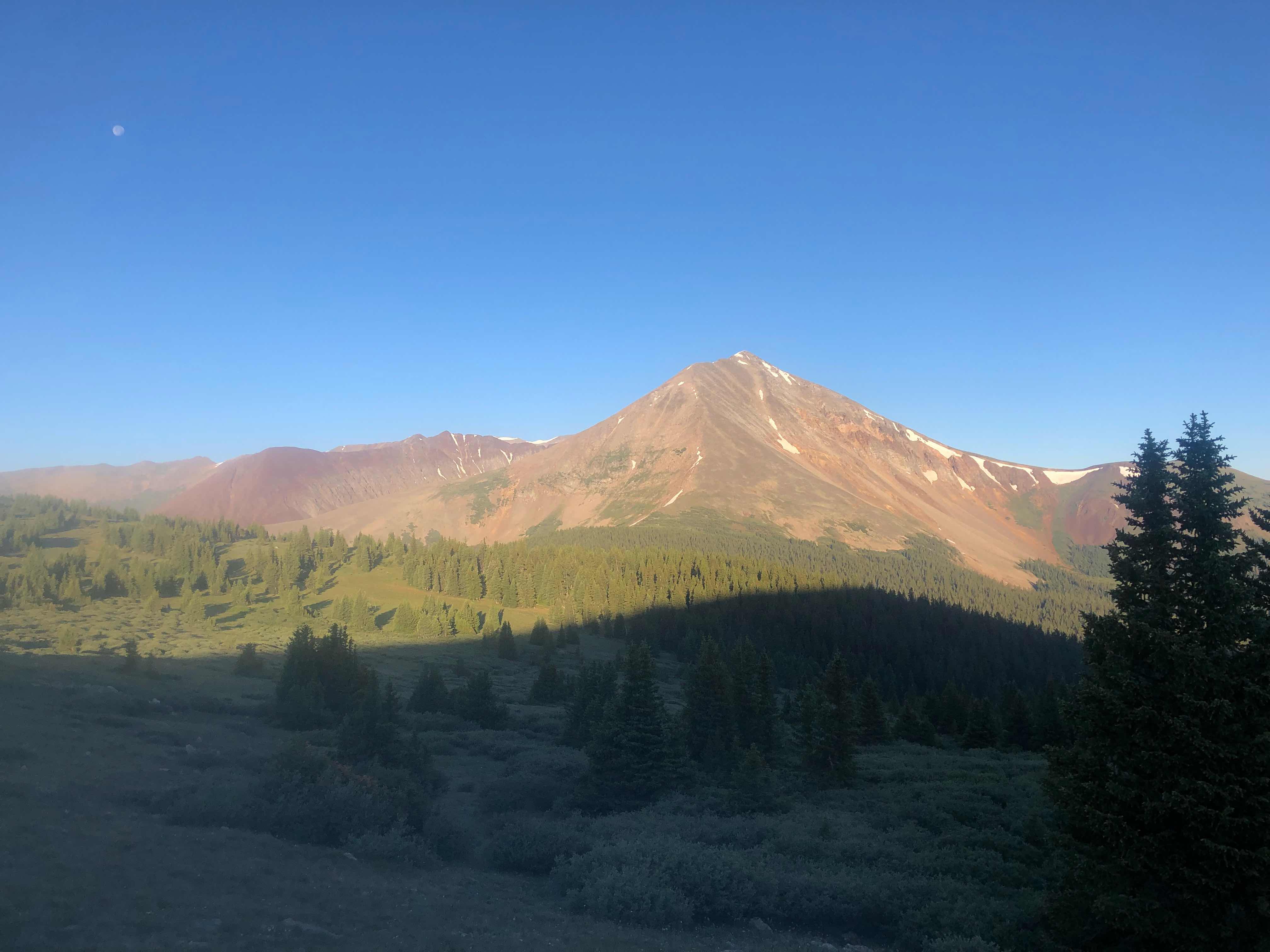 View from my sleeping bag
The day started out easy enough. I had a short and easy climb that took me to a “road”. This road might have been used ten years ago, but today it was barely visible. Right around the time I joined this road I officially separated with the Colorado Trail. I will miss the well signed and maintained trails of the CT. I gained about one thousand feet of elevation following a washed out dirt road. It was difficult to hike on and it was fairly steep. Once I hit the summit the road transitioned into trail, or at least that is what Guthook said. I couldn’t find a trail so I just headed in a general direction. Eventually I could see the trail on the other side of a mountain. This was a common theme for the day. 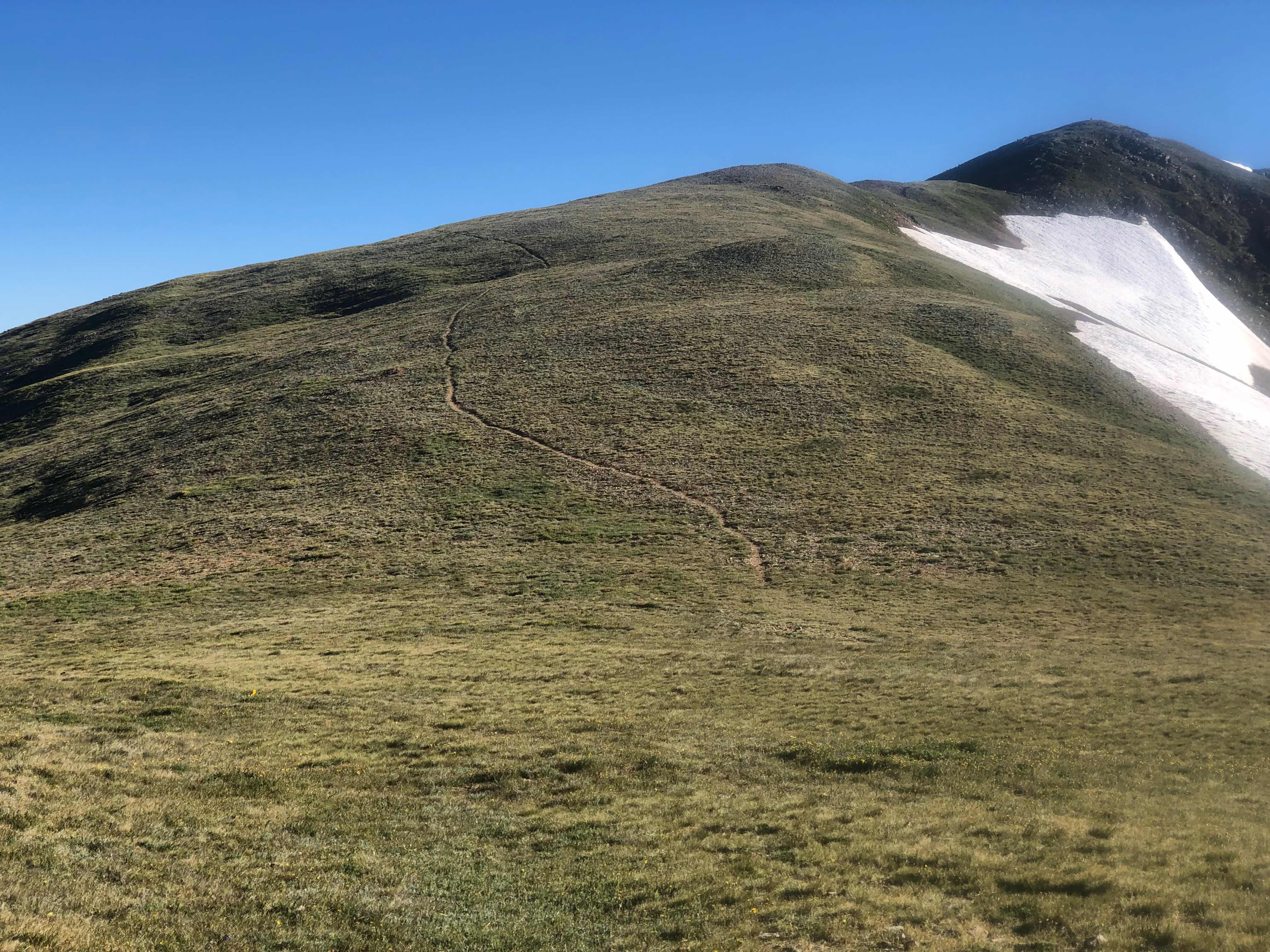 Found the trail
Usually around this time in the morning it begins to warm up. Especially on blue bird days such as this. Today was so incredibly windy that it was colder than when I first started this morning. I came to a sheltered spot on a ridge and decided that was a good spot to take a break. My hands were so cold from the wind that I had to put on my gloves. I keep one pair of gloves to use only at night, the other pair I carry are latex gloves to use in the rain. While I was eating a snack I heard a strange noise and looked up. A big elk was coming my way. He got within ten feet of me. It was really cool. 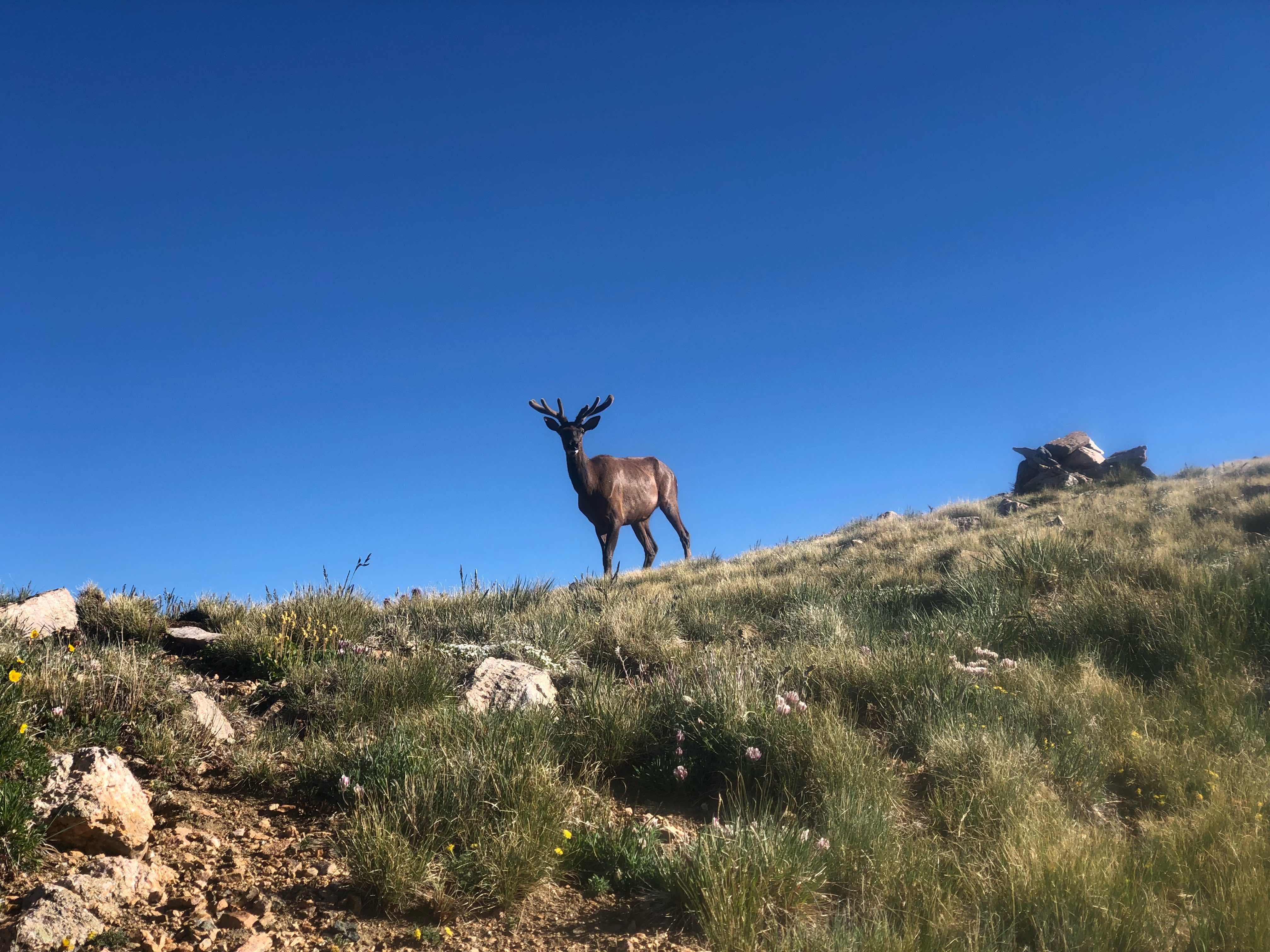 No filter and no zoom
I haven’t ever had such a close encounter with an elk before. This made my entire morning. The day would get a lot harrier from here on out. I hiked on the actual divide for most of the day. This meant that I followed a high elevation ridge line with very little actual trail. I would go up to the top of a peak, follow the ridge, go down, then repeat the process all over again. The extremely high winds made things even more interesting. 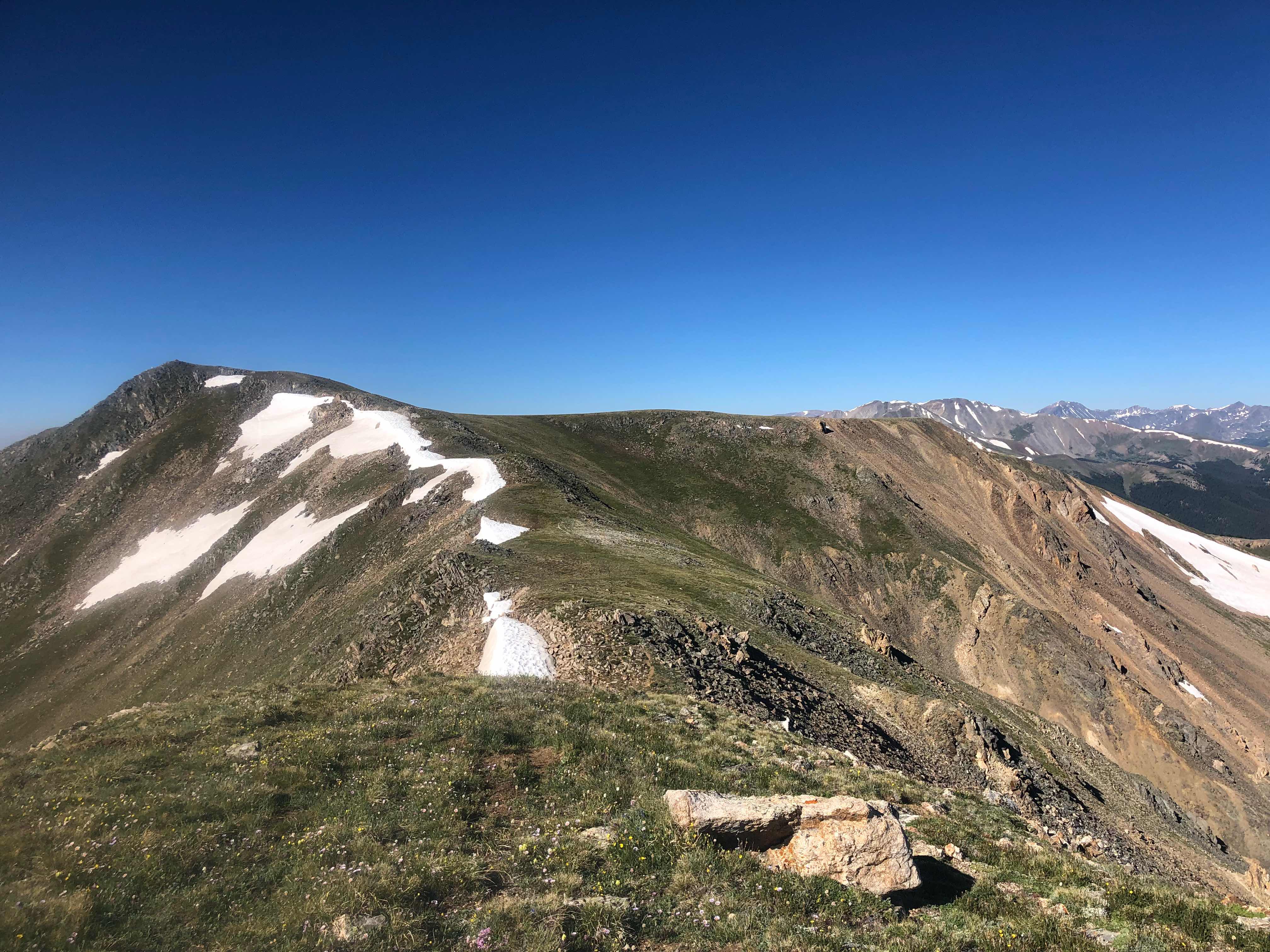 I followed the ridge to the left, then curved to the ridge in the middle
When I wasn’t on a ridge or peak I followed Jeep roads. There was a fair amount of people out today. I was impressed by what these jeeps considered a drivable road. Those were some brave drivers. I was nervous hiking on some of those paths. 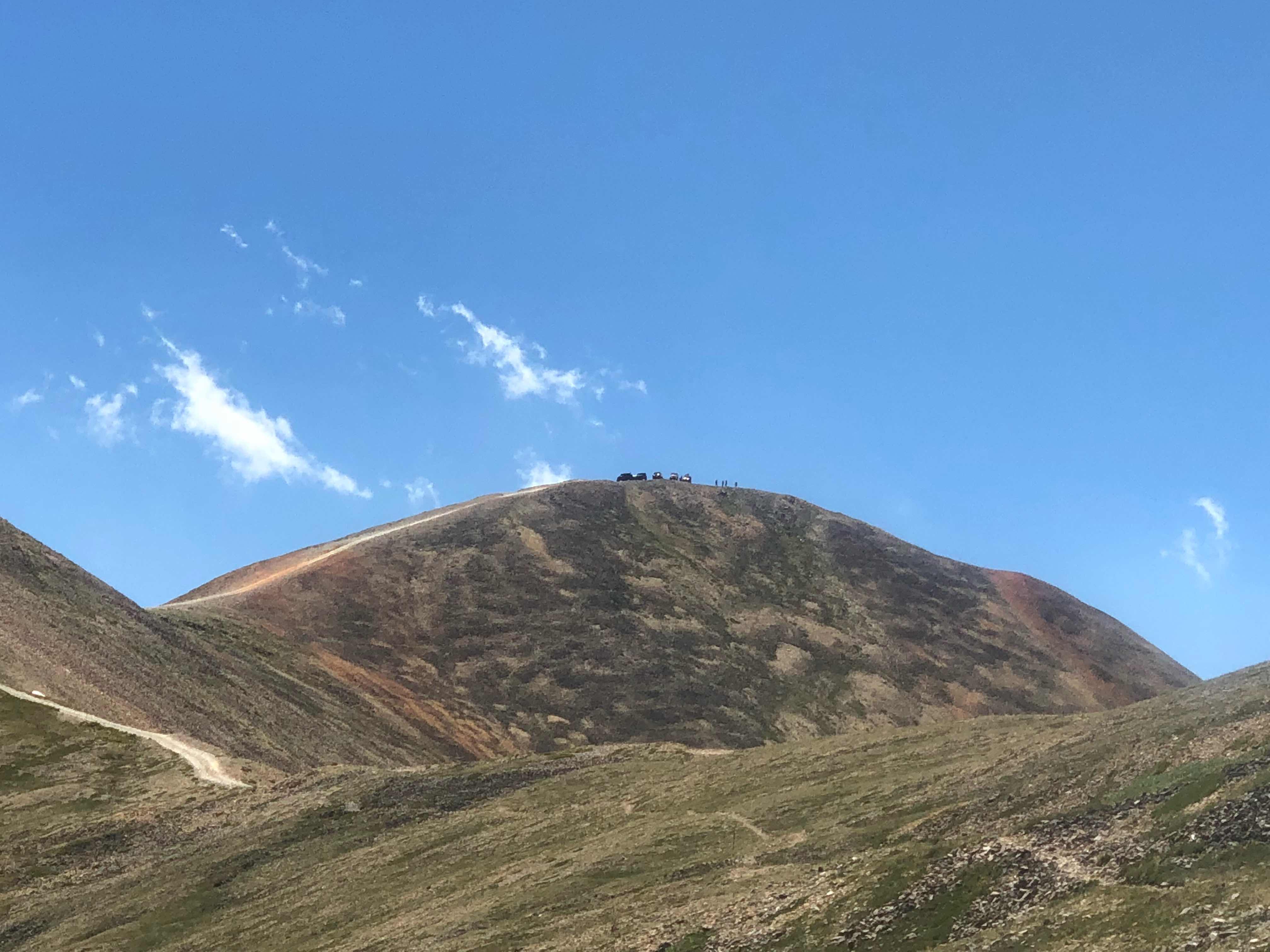 See the jeeps at the top 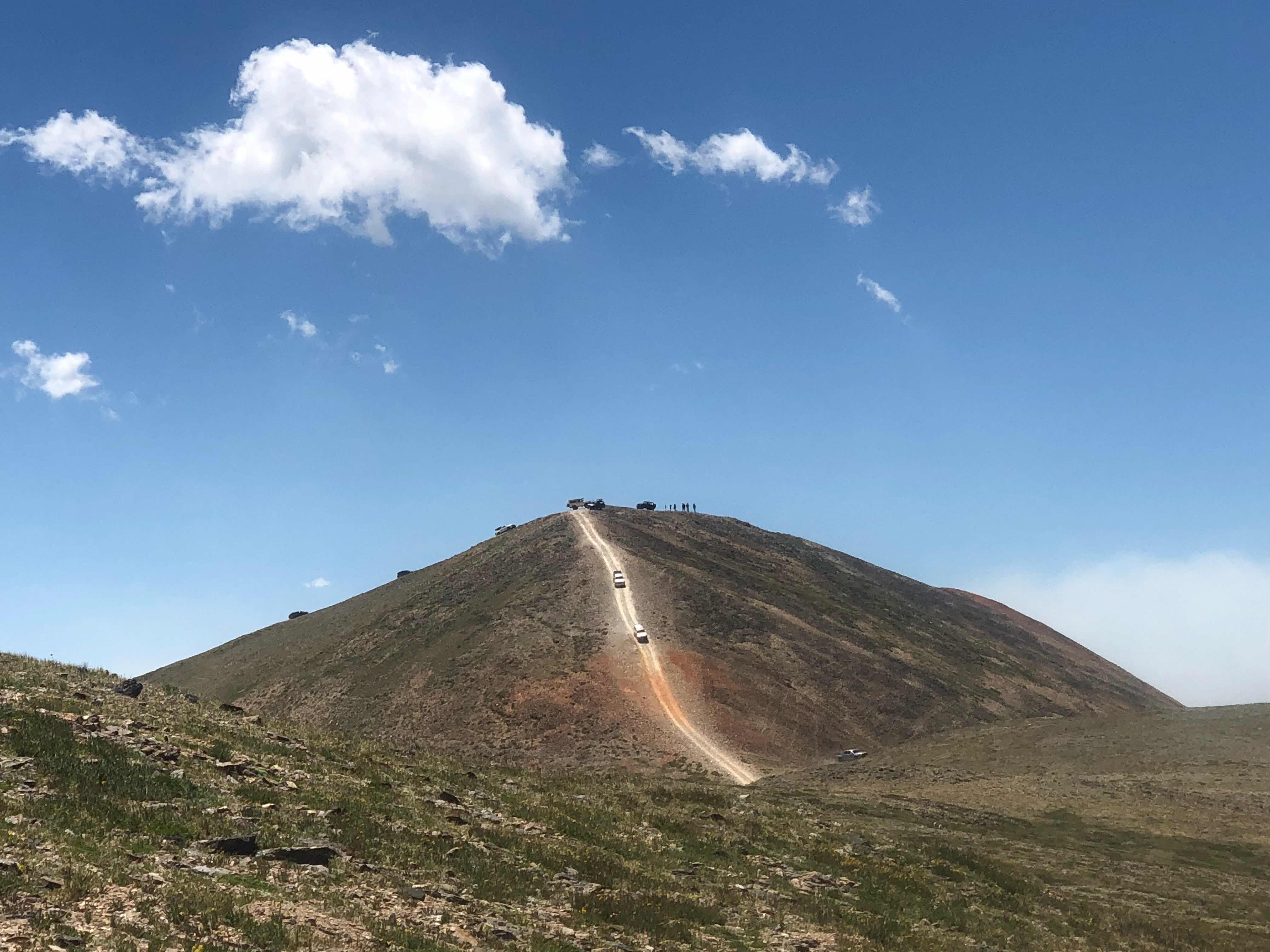 It was like watching a Jeep commercial
If I thought my day was difficult up until this point I was sorely mistaken. The next series of peaks were difficult and time consuming. I would gain code to 6-700 feet of elevation in as little as half a mile. To make things more interesting most of the peaks topped out above 13,000 feet. I think I’m acclimated to just under 12,000 feet. The high elevation, no trail, difficult tread, and rocky ground made for slow miles. I am proud of just how far I have come in dealing with my fear of heights. Some of these ridgelines had very steep drop offs and I wasn’t really bothered by it. 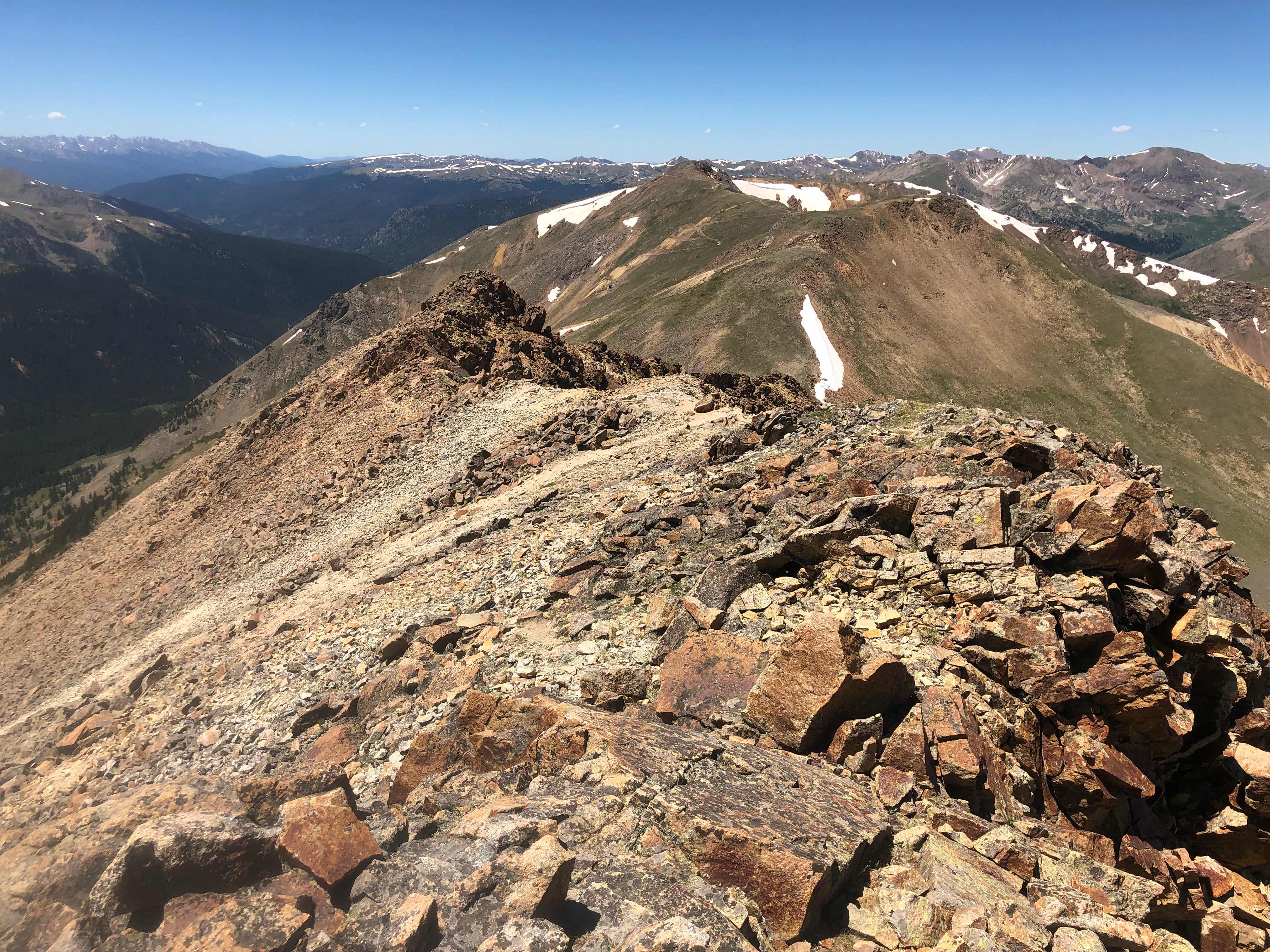 Yup, I walked right over the top of this 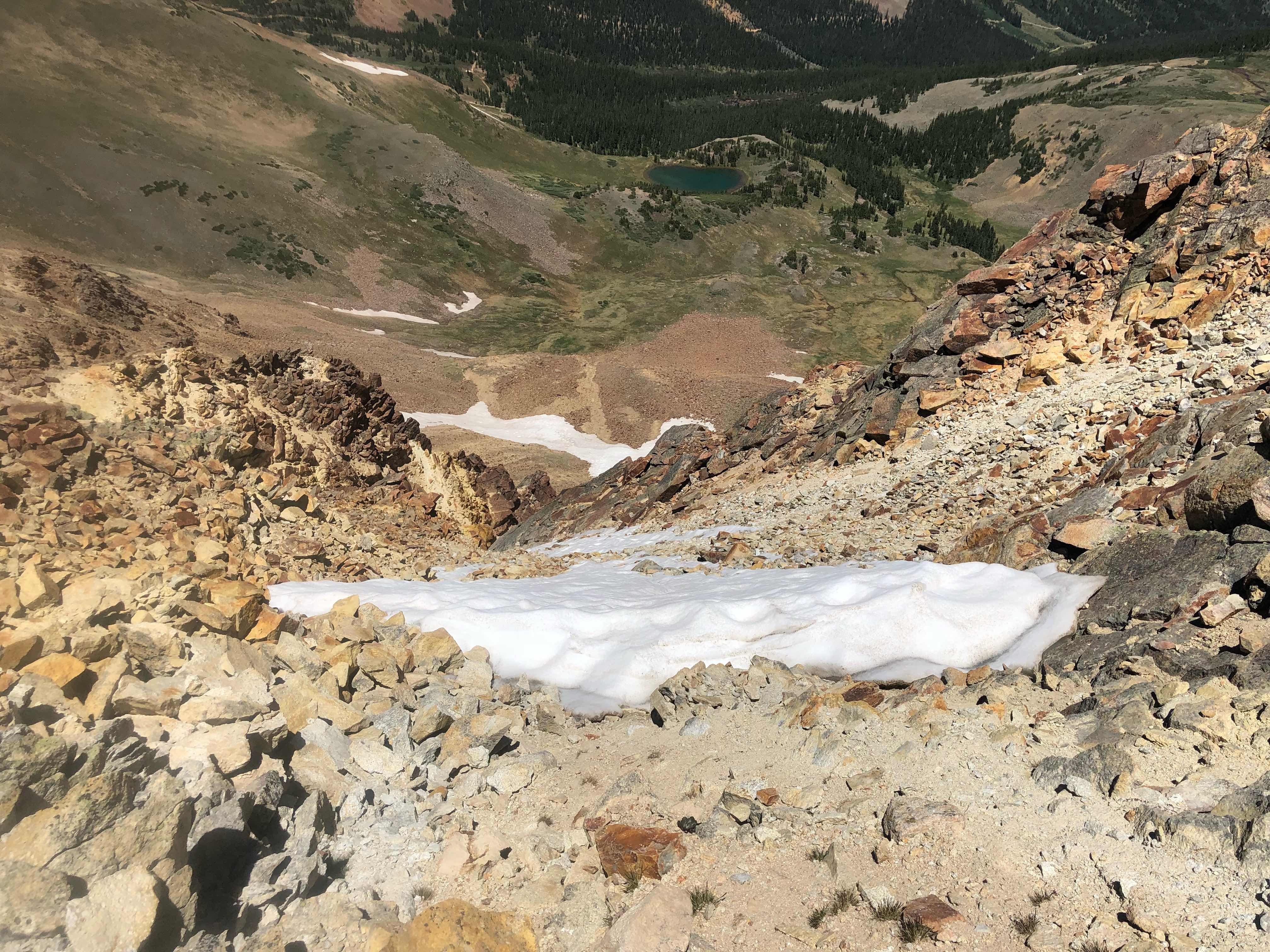 Not a bad view
Going up was much preferable to getting down. This rock was very crumbly and ever footstep would slip a little. Going down was three times as time consuming as going uphill. My back and knee are feeling much better, but I could feel the strain on the downhills. 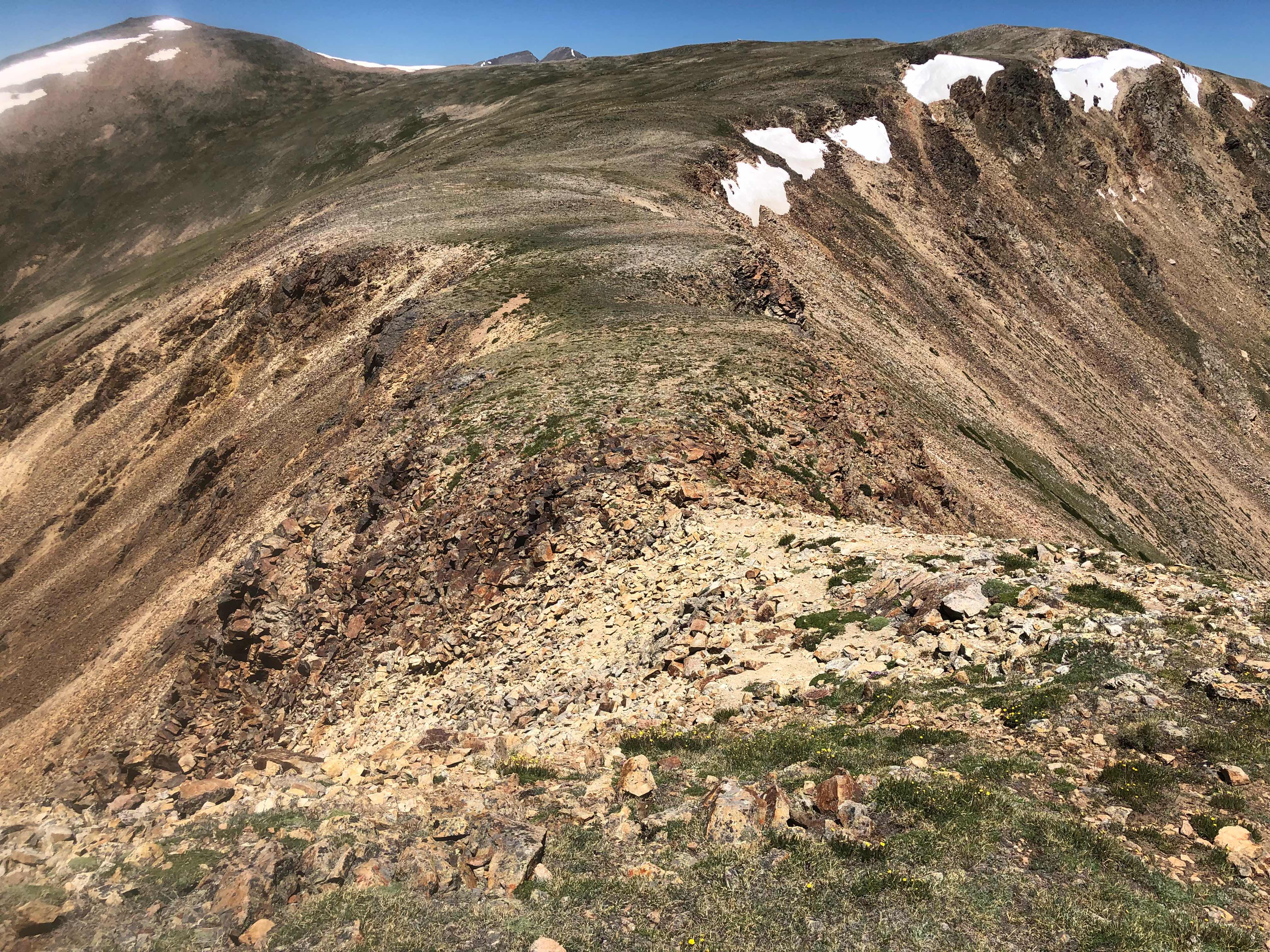 Nice wide area to walk on, but no trail. Just head in a general direction 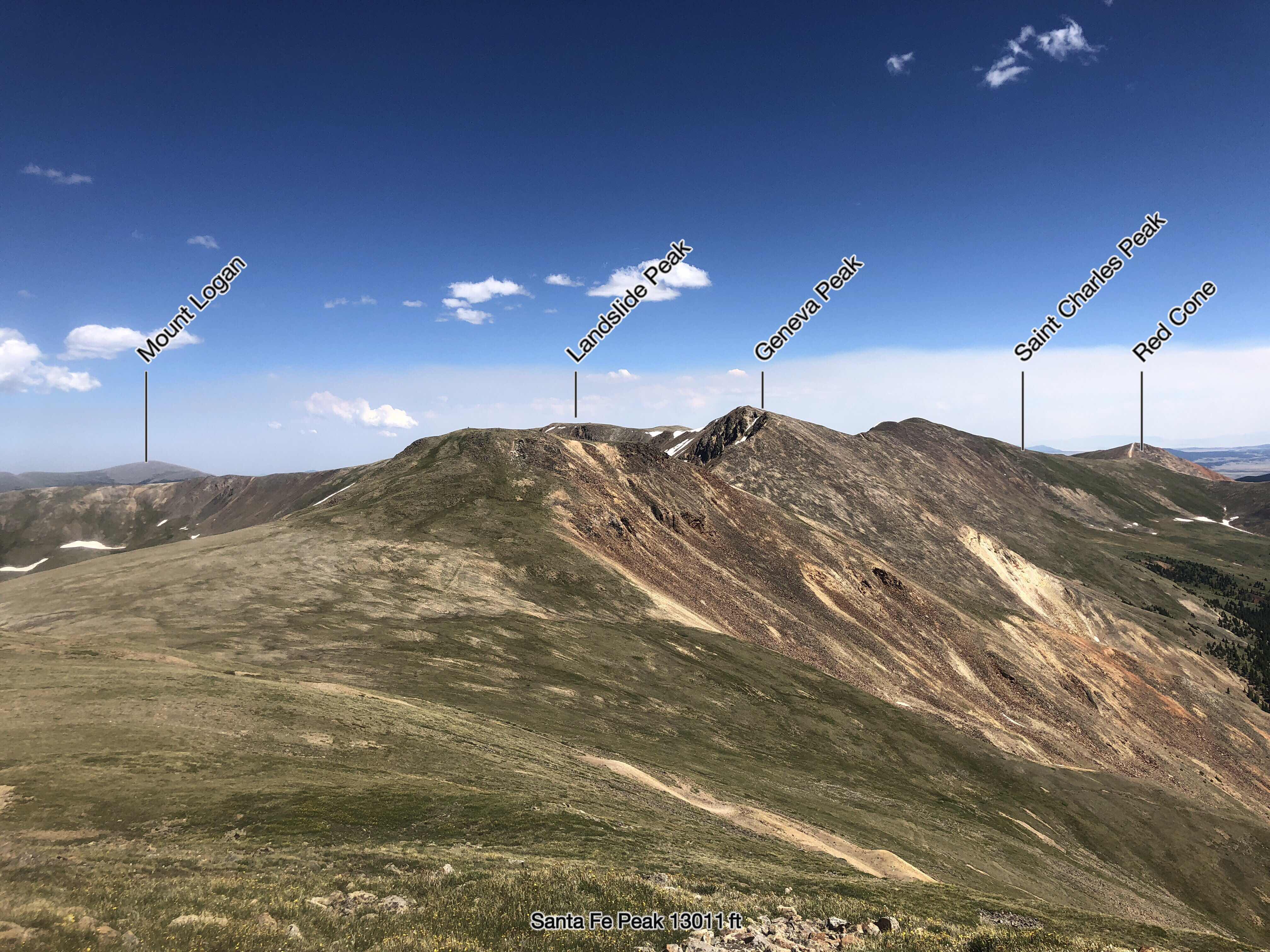 Looking back to where I came from, Red Cone. Landslide Peak was aptly named. It was very sketchy on the way down 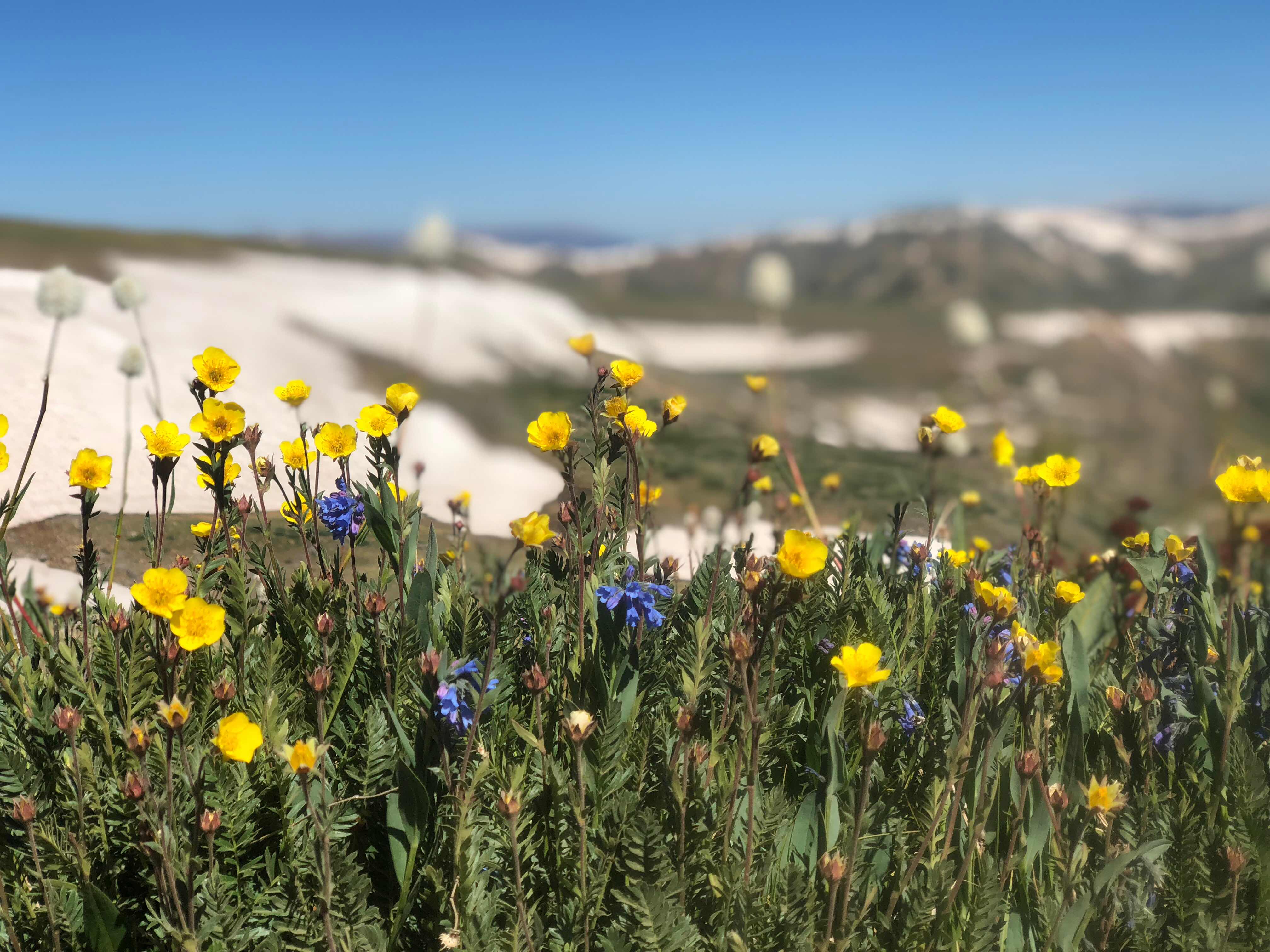 Cool looking flower picture
I met a nice couple from Vail out for an afternoon Jeep ride. They even offered to take my trash and gave me some water. Since the day was way more time consuming than expected, the water was really appreciated. Just as I was really getting the hang of walking over all the ridges, the day changed. I had one massive downhill ahead of me. The first part was on a rocky Jeep road and I had problems keeping my footing. The rocks were about the size of marbles, the effect they had on me was similar to walking downhill on marbles. I was pleased that I never fell. 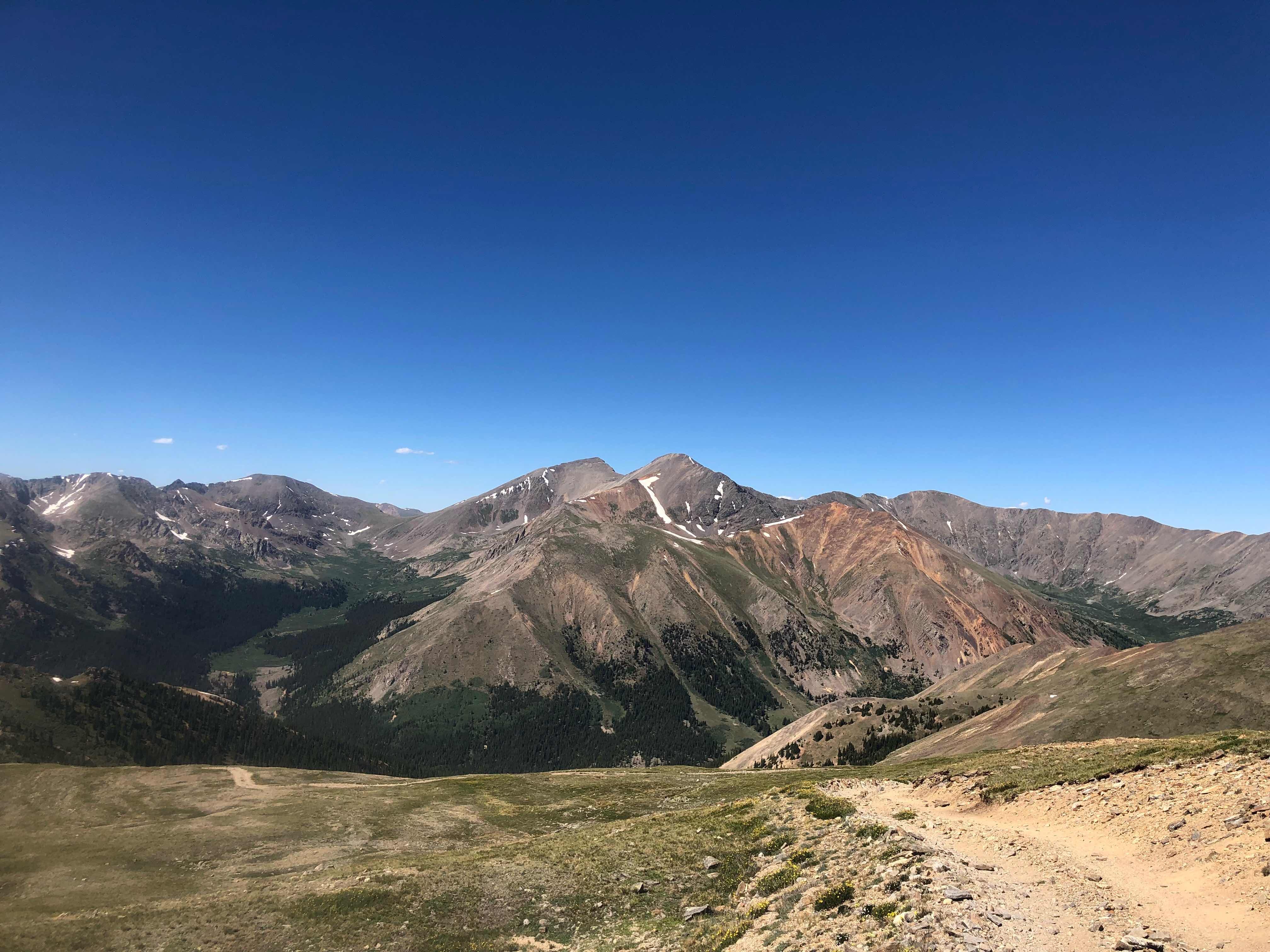 Steep downhill marbley road
The most dangerous part of the day was my own fault. I knew that I had to leave the road and join a trail to get down the rest of the way. I found the trail, but it quickly disappeared. I tried to find it by looking around, but I only saw a trail going uphill. I was 100% sure that I went downhill at this point. The Guthook app showed me that not only did I go downhill, but that went very steeply downhill.

Yowzeers
I saw what kind of looked like a trail, but it also looked like insanity to go down. I thought I saw a few footprints so I headed that way. The Guthook app showed that I was on target, but I was very uncomfortable with what had to be done. I took my time, but no matter what I did my feet slipped. At one point I slid 15 feet straight downhill. By this time I was at a point where I could no longer go back up. My only option was to continue down, but that also seemed like a horrible proposition. I was almost cliffed out. I couldn’t believe I put myself in such a precarious position. I knew before I started that something didn’t seem right. I took one more step and lost control completely. I slid about 30 feet before I got my hiking poles dug in and my foot finally found purchase. I was practically dangling off of a cliff. The rock that my foot caught allowed me to ease myself down to a “safer” spot. The worst part was done with, from here on out another slip would just ripped flesh from the bone. My backside was drenched and muddy. I wasn’t sure that it was all mud. There was a 50/50 chance that I had actually shit myself I was so scared. I made it the rest of the way down, although I fell several more times none of which were bad or scary, just frustrating. No damage was done, except of few minor tears to my backpack. I did learn a valuable lesson: trust your instincts. Nothing about that situation seemed correct, but I proceeded down instead of taking a few minutes to look at a different route. Thevtrail did go uphill briefly before beginning easy switchbacks down the mountain. 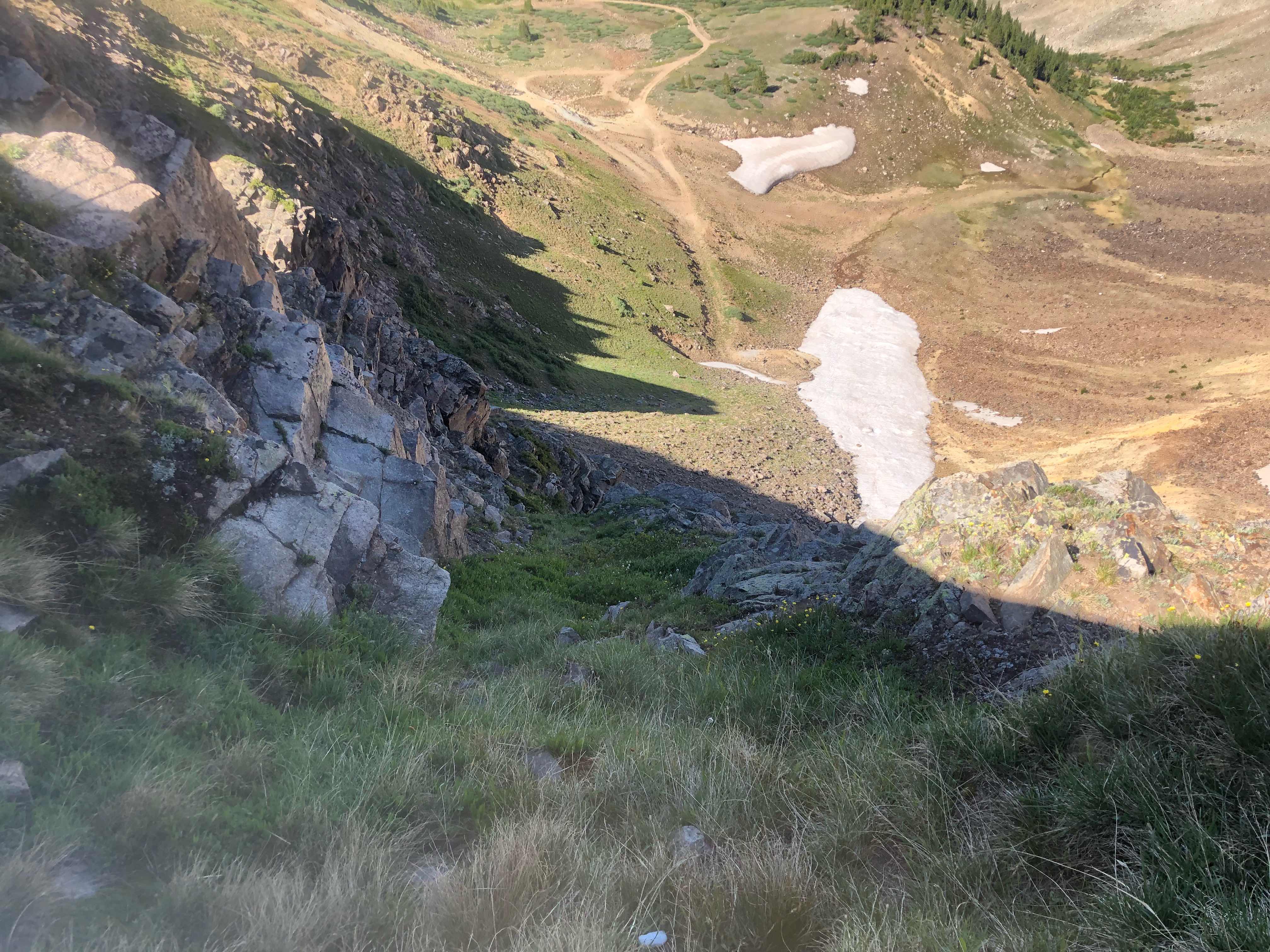 Hard to get perspective from this picture 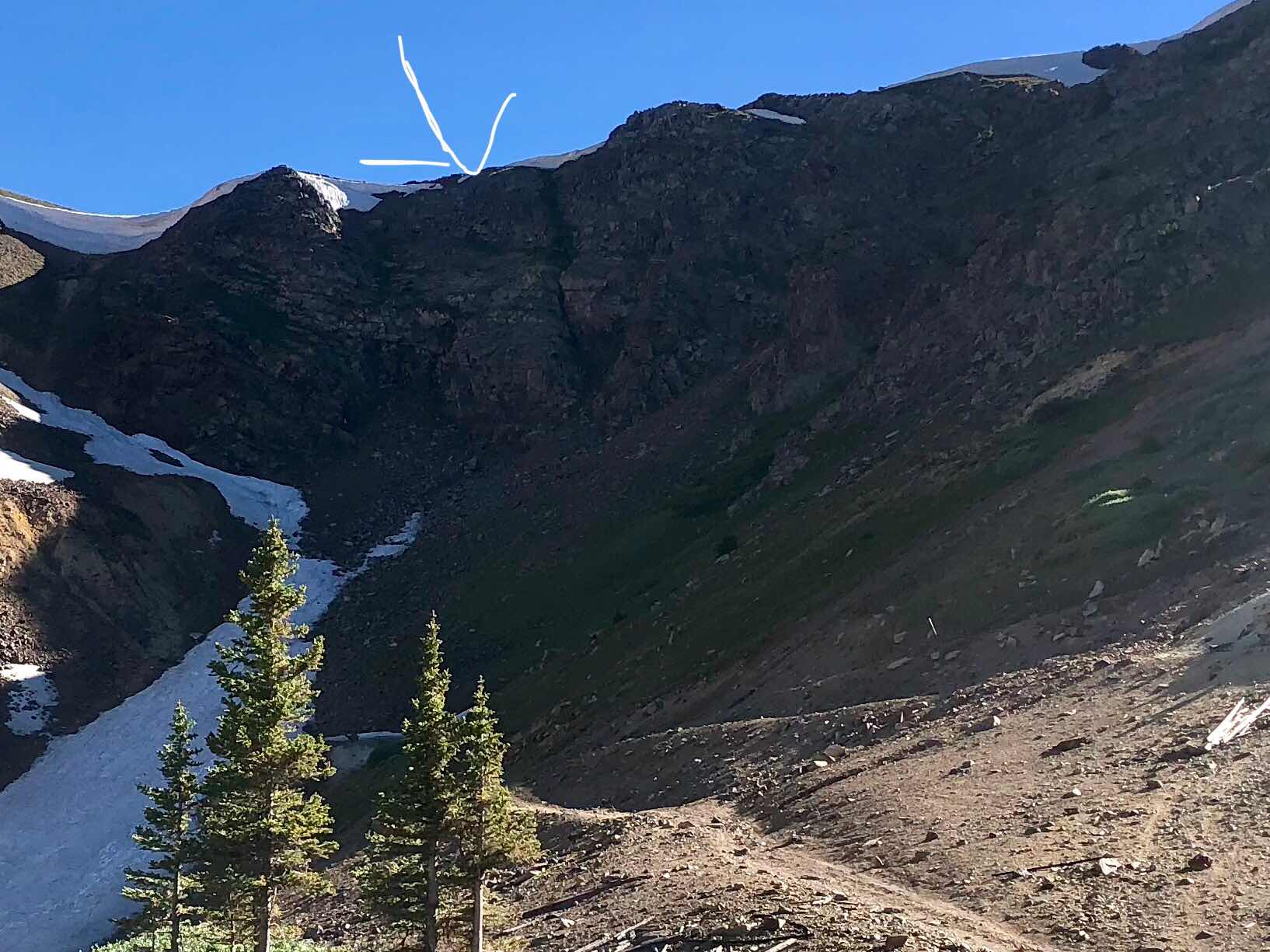 Just below the arrow is where I dropped in
The rest of the hike down was uneventful. I promise I will never do anything like that again. It was stupid and I knew better.
Tomorrow will be another tough day and I need to get some rest. I will hit the highest point of the trail, Grays Peak, elevation 14,254 feet
“Those who contemplate the beauty of the earth find reserves of strength that will endure as long as life lasts.”
- Rachel Carlson