Whenever I have a bad day on trail I ask myself one simple question, “Would you rather be at work or out here hiking?” The answer is always out here hiking. Well, today the answer was I would rather be at work. I work in the restaurant business as a bartender. I would rather have been at the bar, in the weeds, with every single thing that could go wrong going wrong. Today was miserable! When I woke up it was chilly out. I hurriedly packed up and started hiking. The ever present mosquitos were kept at bay by the chilly morning, so that was good. Within a mile I had my first stream crossing and surprise, surprise, it was a wet crossing. My feet were already cold from putting on dirty wet socks into filthy wet shoes. I rolled up my pant legs to keep them dry and just went for it. The stream was deeper than it looked and went up to mid thigh. I got to hike the rest of the morning in soaking wet socks, shoes, and pants. Not a great start to the day and things just kept getting worse.
The next challenge was hiking through a muddy swampy forest filled with ponds, lakes, and downed trees. It wasn’t long before the hordes of mosquitos attacked. Every time I would start to put hike them I would have to stop for a downed tree or a muddy section of trail. The obstacles slowed me down just enough for the blood suckers to catch up. I kept on my wet pants for a layer of protection and got out my insect head net. I absolutely detest hiking with the head net on, but desperate times calls for desperate measures. 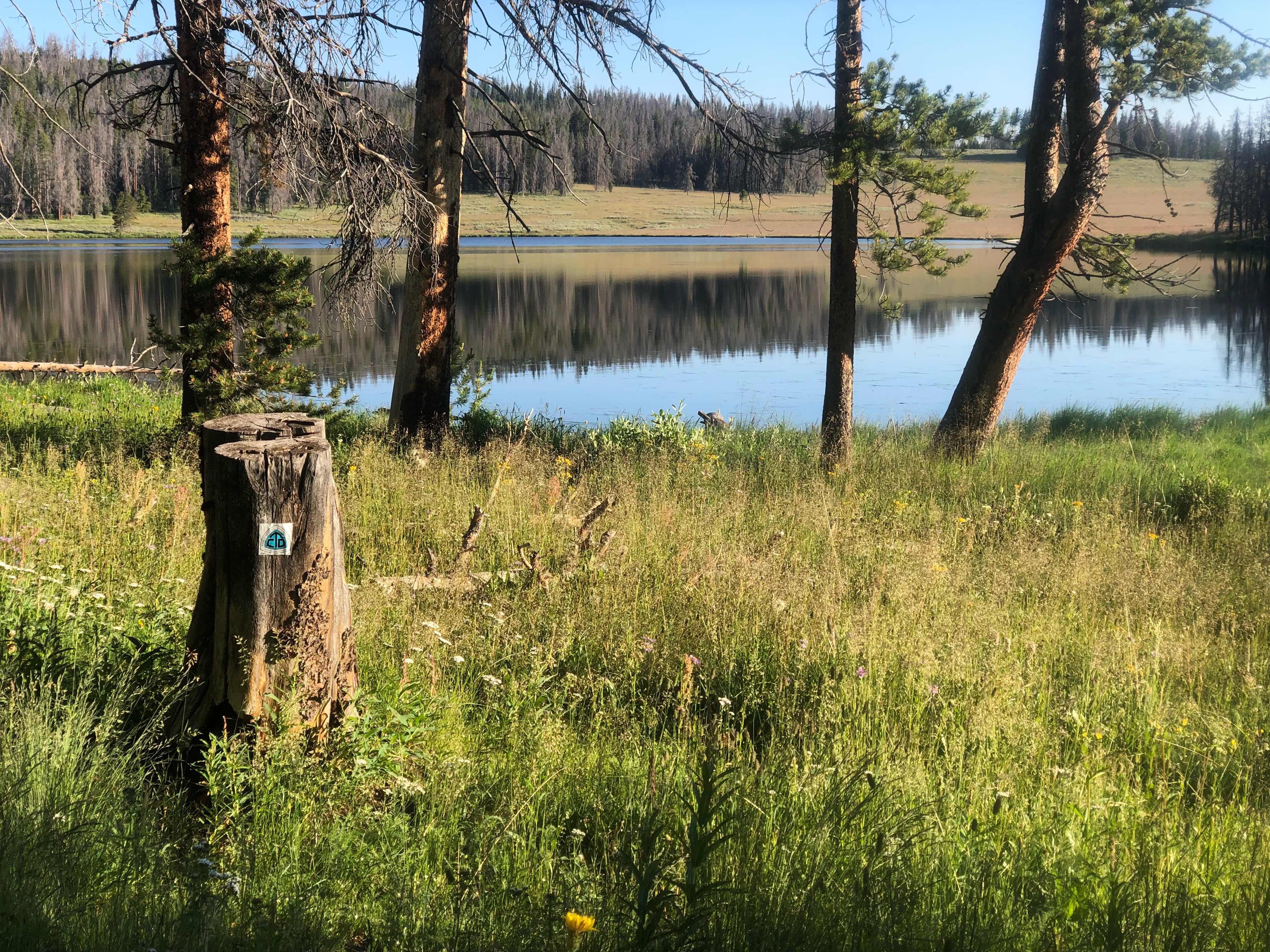 Breeding ground for trillions of mosquitos
I had just decided that I would much rather deal with biting flies instead of mosquitos when the trail/jeep road turned away from the forest. I was hoping that being out in the open and away from ponds and lakes would improve my situation. I spent the rest of the afternoon hiking through meadows. It would have been a lovely afternoon if it wasn’t for the marshy conditions. The mosquitos did go away, but the biting flies arrived. Be careful what you wish for! 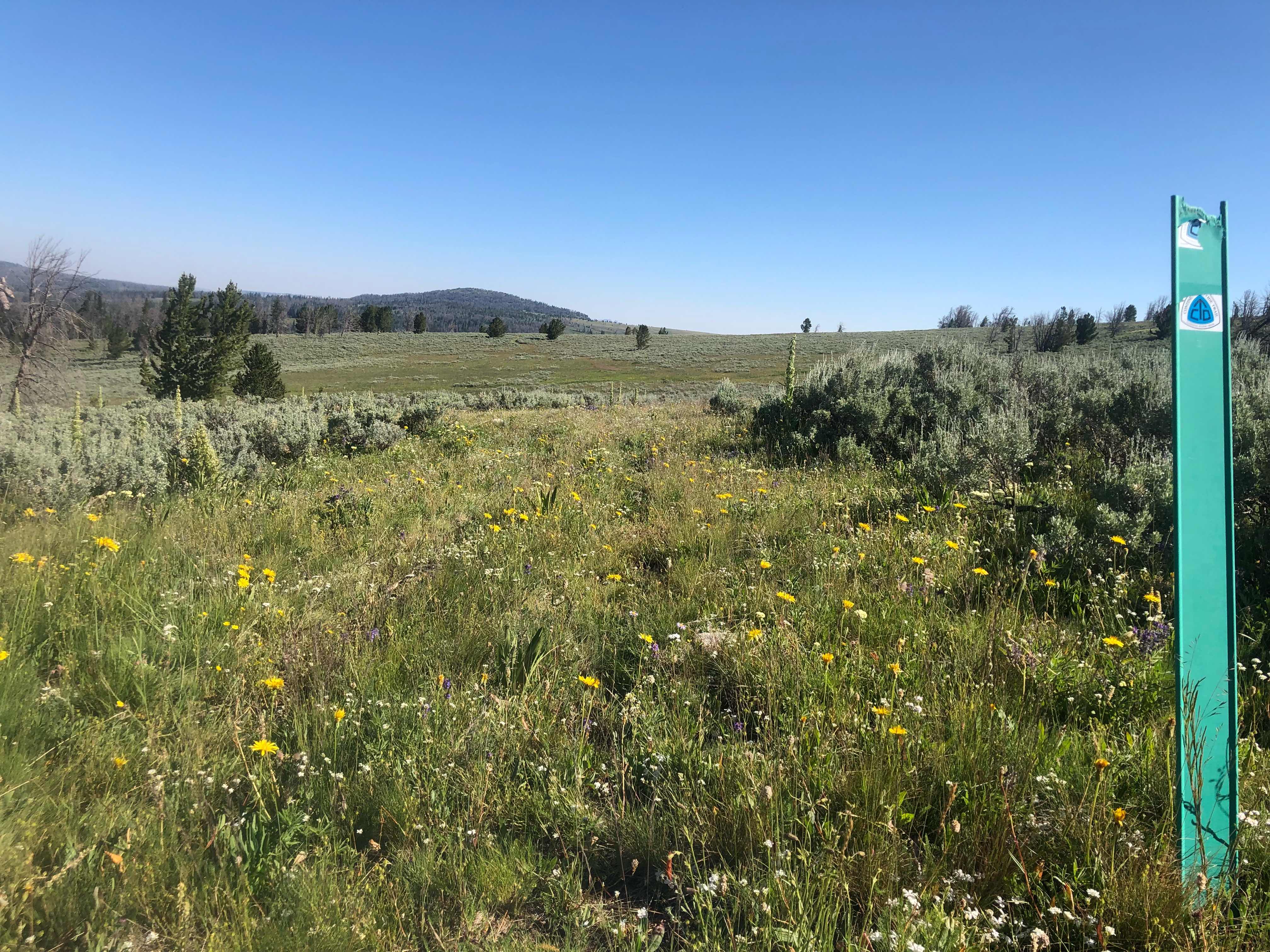 Looks nice, but it was hell
In the marshy meadow the trail was very overgrown. By this point in the day I had taken my pants off and was hiking in shorts. It was just too hot to be wearing my pants. The overgrown parts of the trail contained shrubs with thorns, so it wasn’t too long before my shins were completely shredded. I would have put my pants back on for protection, but the muddy bits of trail were ankle deep and I didn’t want to hiking in muddy pants. Muddy, soaking wet socks and shoes were bad enough. At least I had plenty of wet stream crossings to clean the muddy off of my shoes. 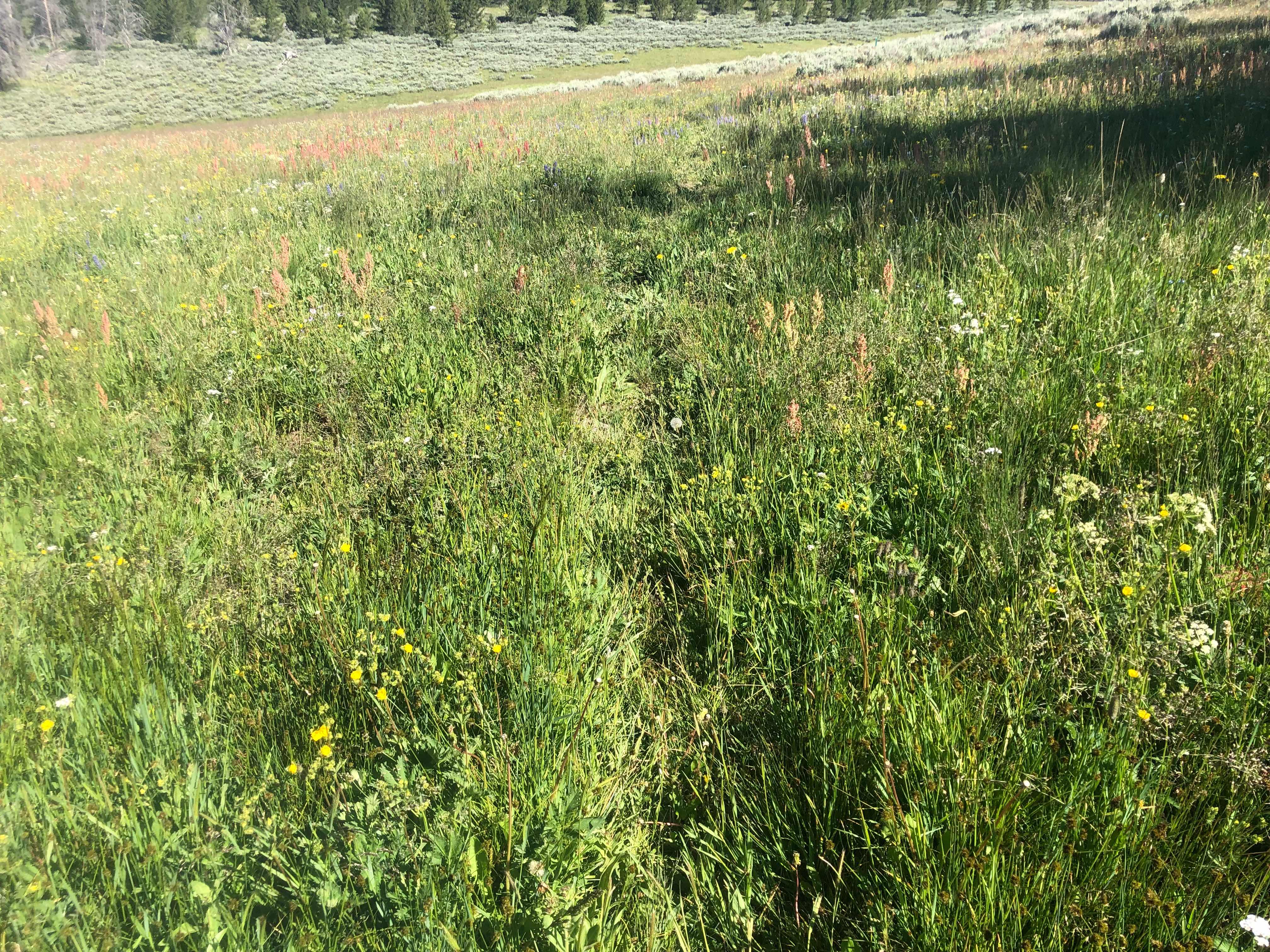 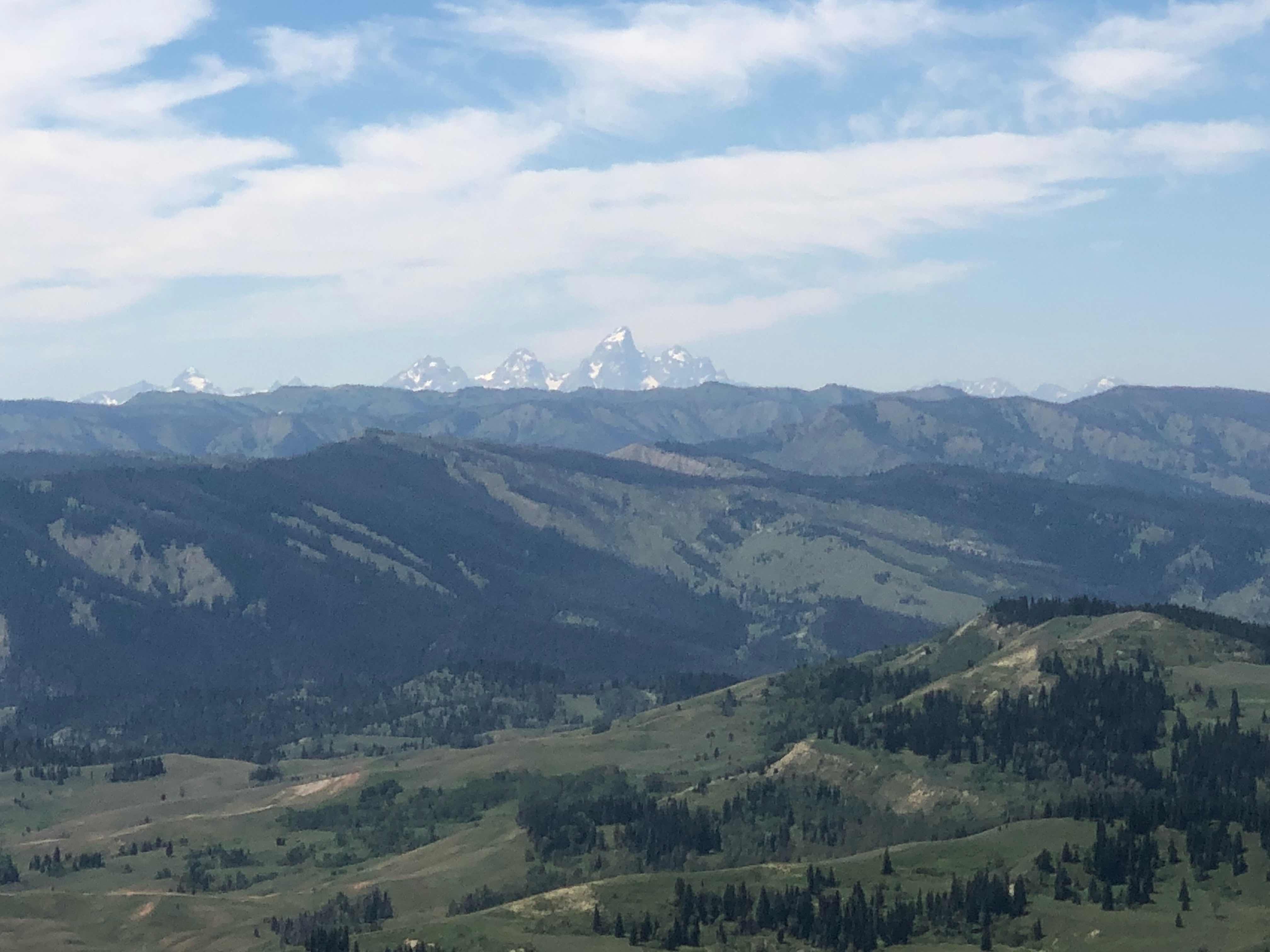 The Tetons
A few times I wasn’t paying close enough attention to where I was putting my feet down. I stepped into large mud holes that went almost to my knees. I was worried that my shoe was going to come off when I pulled my leg out. I’m lucky nobody was around today, because every time that happened I would scream a few profanities. That did make me feel momentarily better. I can’t even begin to describe the misery of walking through sloppy mud while being consumed bite by bite by horse and deer flies. Every single time I stopped for water, to eat a snack, or pee they were there. Getting bit on the ass while peeing is sooooo much fun. It is a sure bet that when a fly bites your butt while you’re peeing that you will inadvertently pee on yourself. 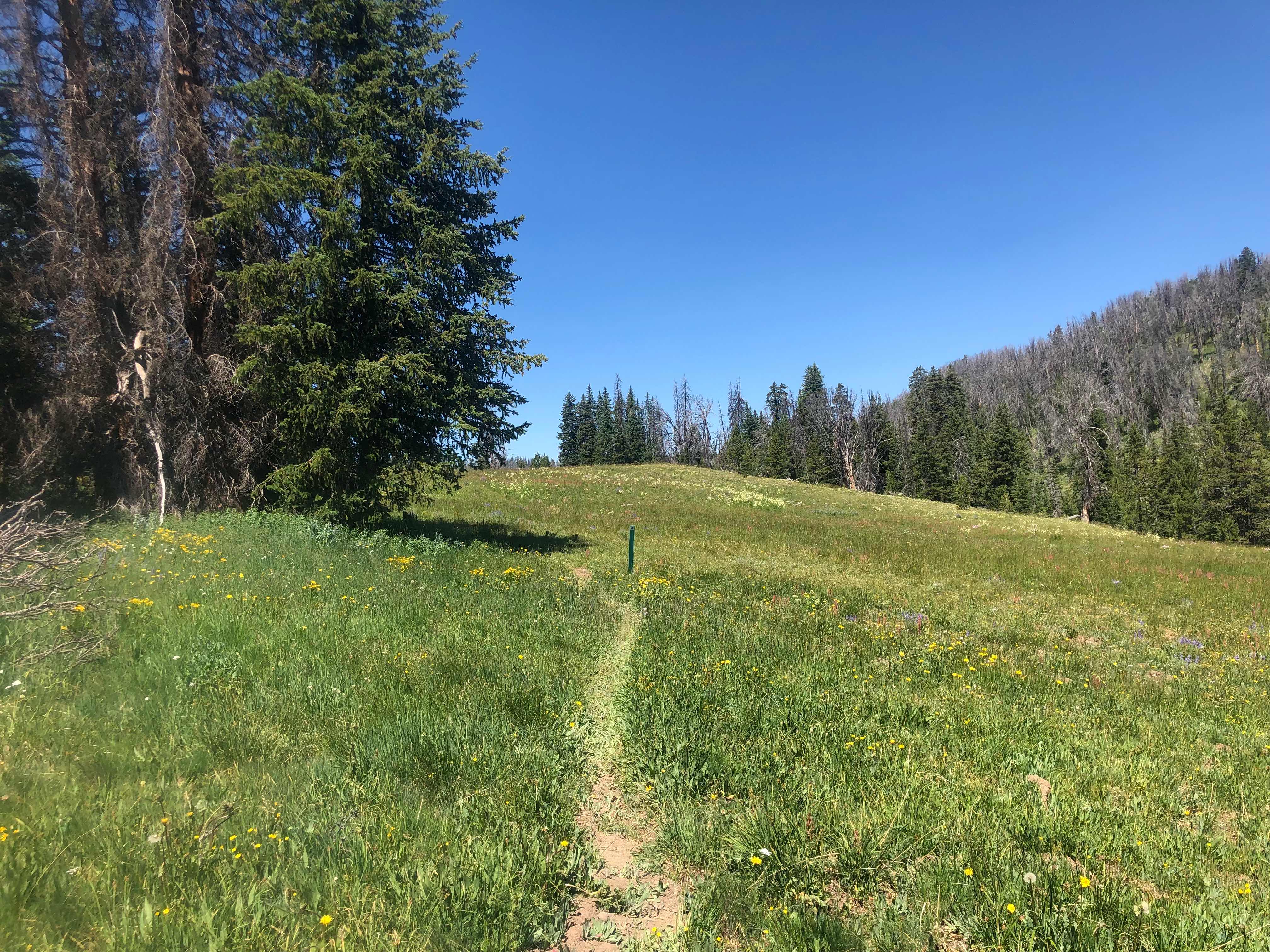 Not a very interesting day
Towards mid afternoon I came across a very large herd of cattle. This was one of the largest herds I’ve seen on trail. At first they did not seem to want to move. I got closer and closer while they just stared at me. Then I got too close to the calfs and they went ballistic. Over 100 cows began to moo at me. It would have been funny, but they started to surround me. I’m no expert in cattle psychology, but this did not seem like normal behavior. I was more than a little worried about being trampled, but this was probably an overreaction. It did make me forget to look where I was stepping and as a result I stepped in a rather large fresh pile of cow poo. My shoes were already so wet and filthy I wasn’t too bothered. 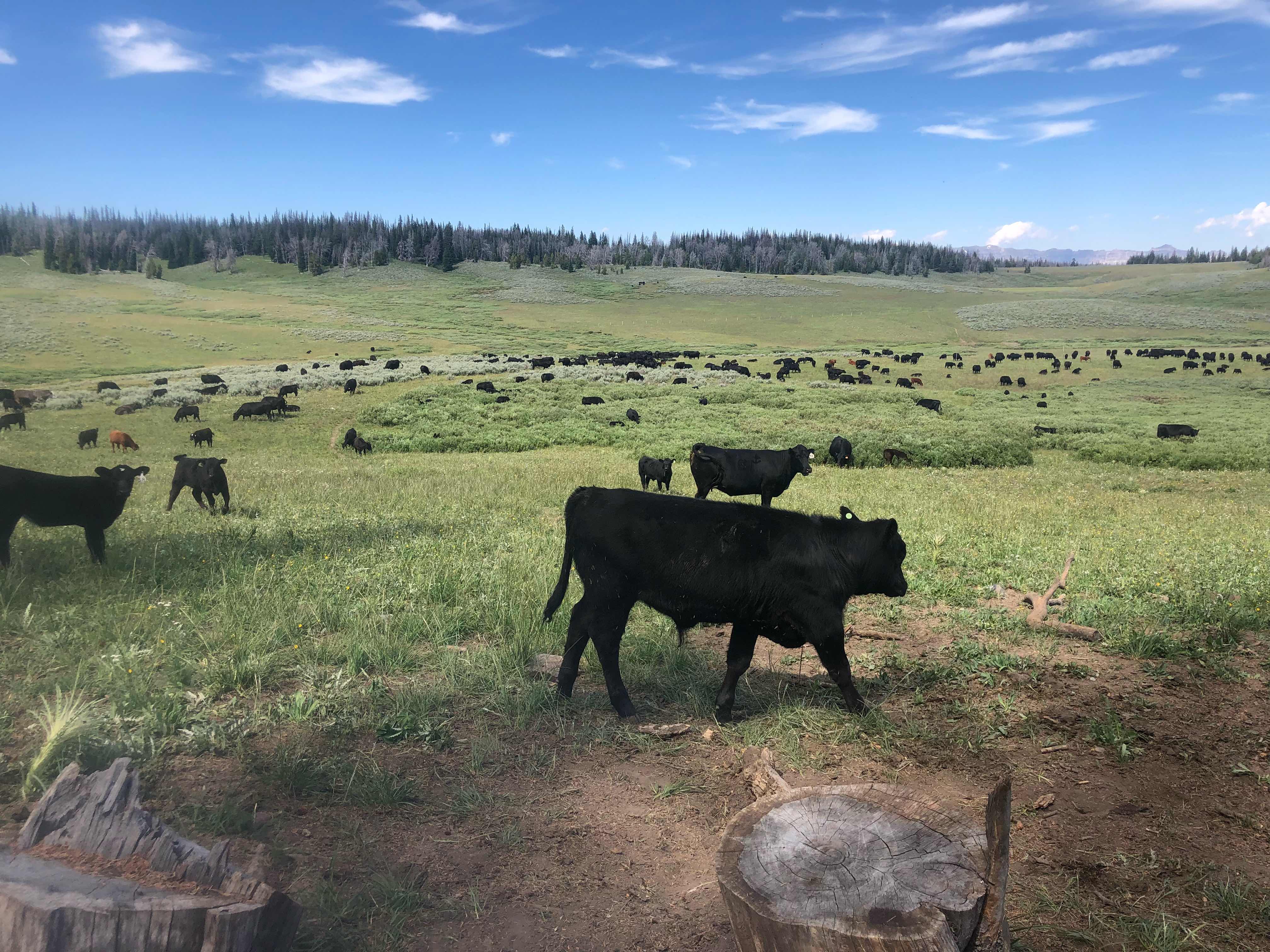 All fun and games at this point 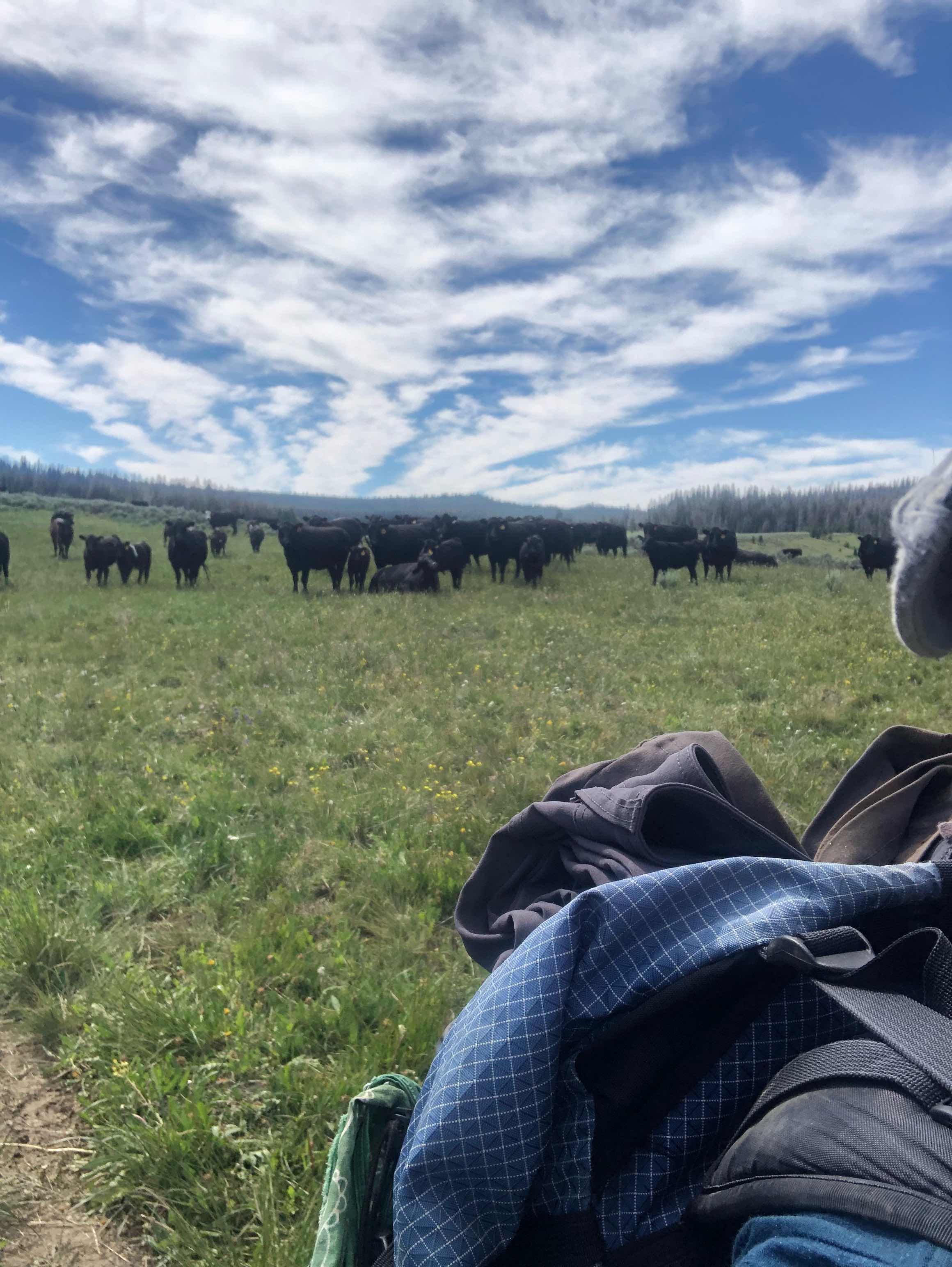 Cow flanking maneuver, I think the rancher has been reading The Art of War to his herd 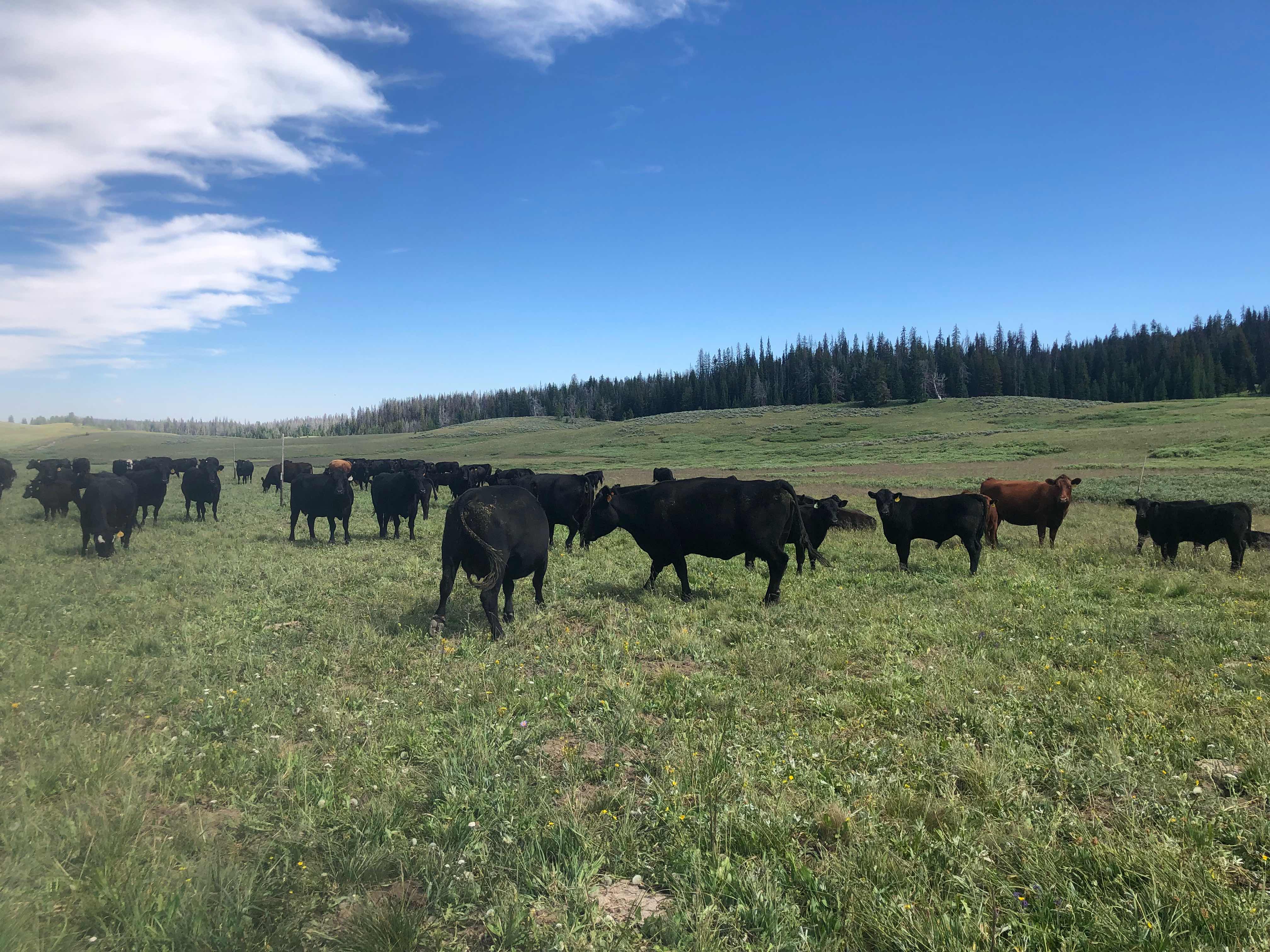 Other side of me
Just after the cow army I went back into the forest and was immediately greeted by the swarms of mosquitos. I just could not win today. It was either blood suckers or flesh stripping flies. The forest hiking was short lived. The trail came out into a swamp. I had no way to go around, the flies were heading my way, and the mosquitos were hot on my tail. I decided to just plow my way through. The smell was horrendous and I tried not to think too much about what might be living in the water. I broke through quickly. 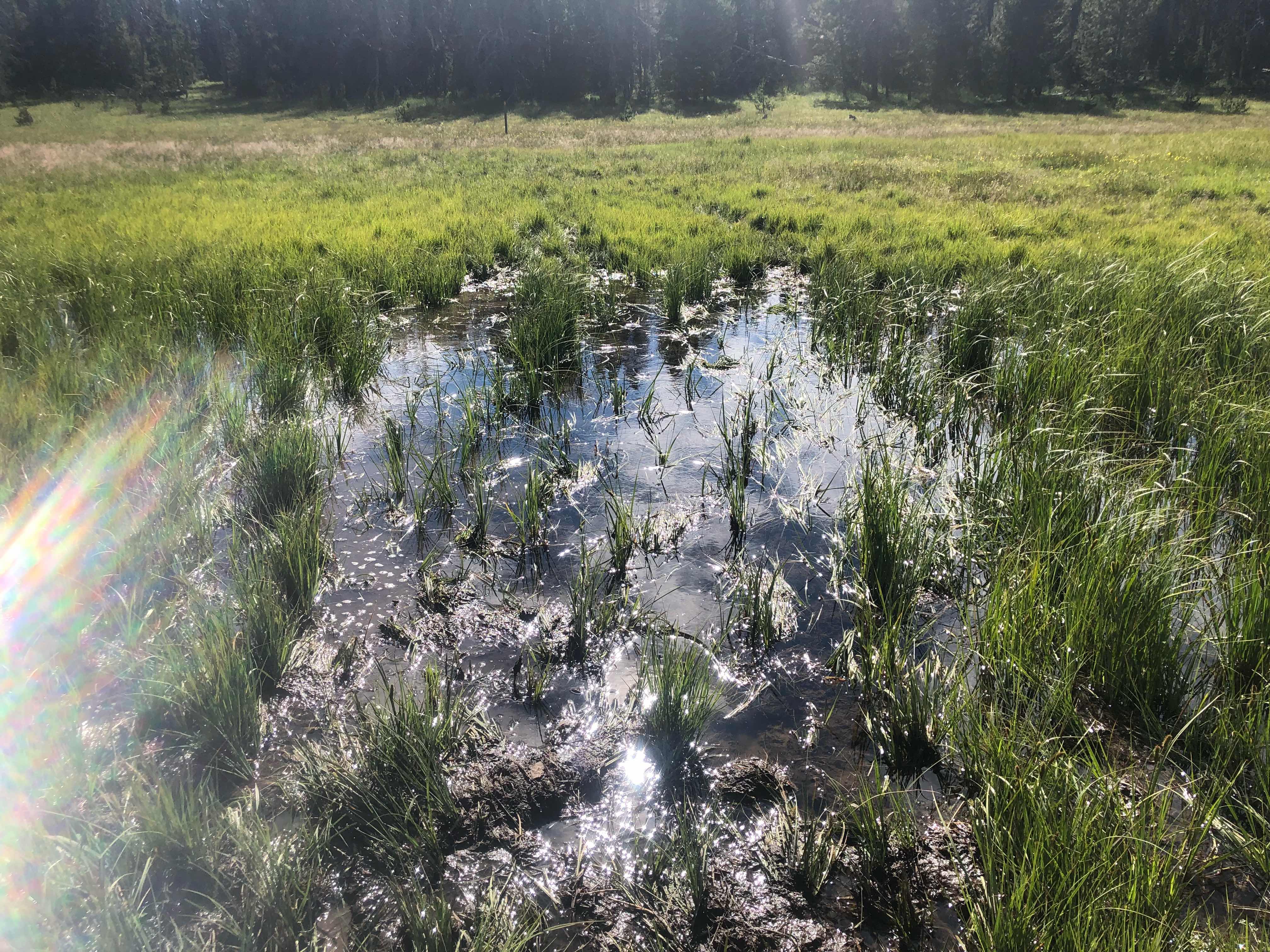 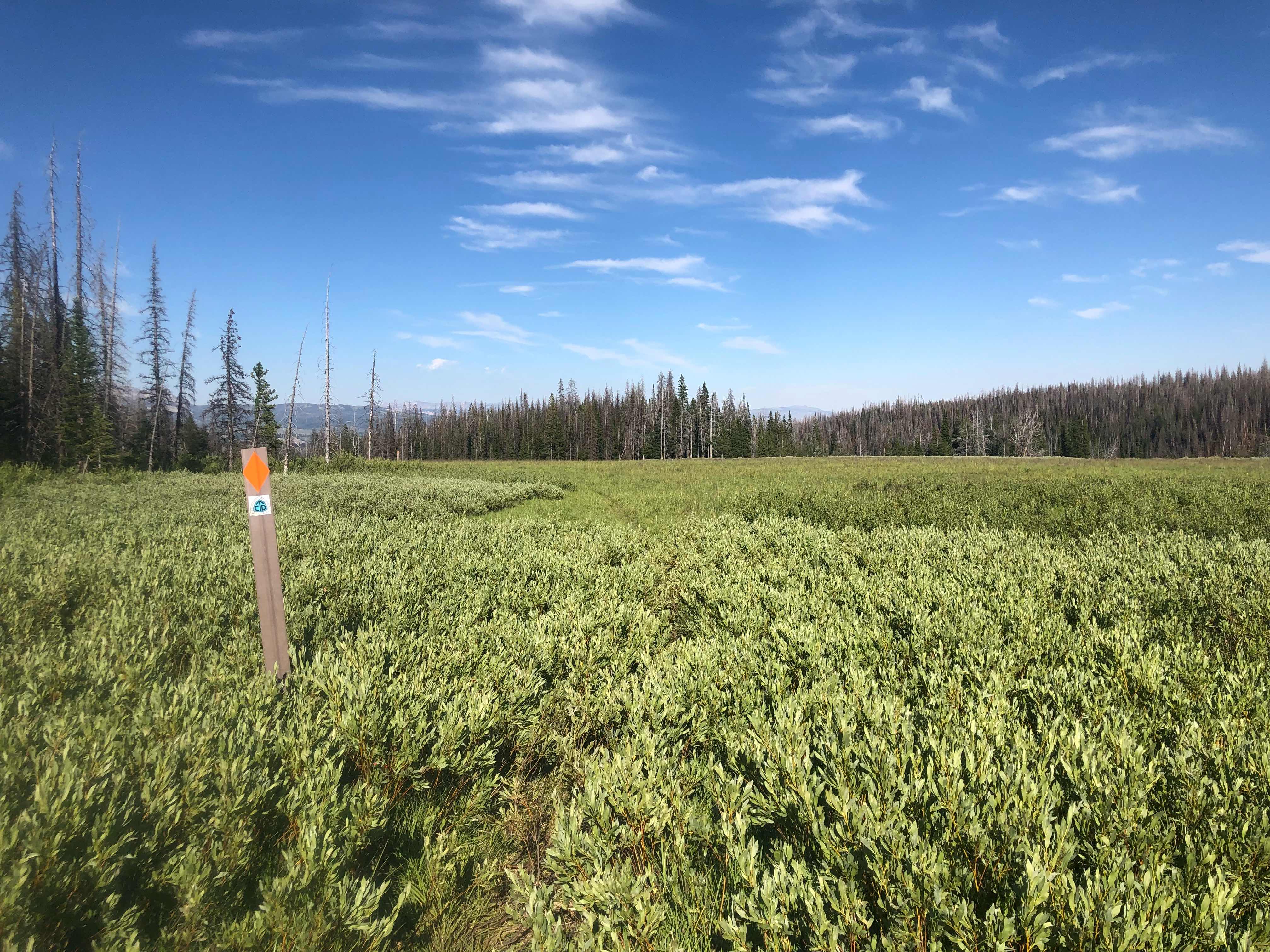 Same views all day
I was looking forward to setting up camp early tonight. The last two nights I have hiked until eight thirty. Once again I was thwarted. I only wanted to hike 28 miles today, but I was forced to keep going. There was zero opportunities to set up camp. I ended up next to a gravel forest service road. The location is less than ideal, but better than sleeping on the road, which I almost decided to do. I’m glad I didn’t because as I was setting up my sleeping pad two trucks drove by. I am more than ready for a day in town. This has been the most miles I’ve hiked without a resupply on this trail. I’ll meet my mom and dad in the morning for a nero and a zero! Let’s hope that I won’t have another day like today again. 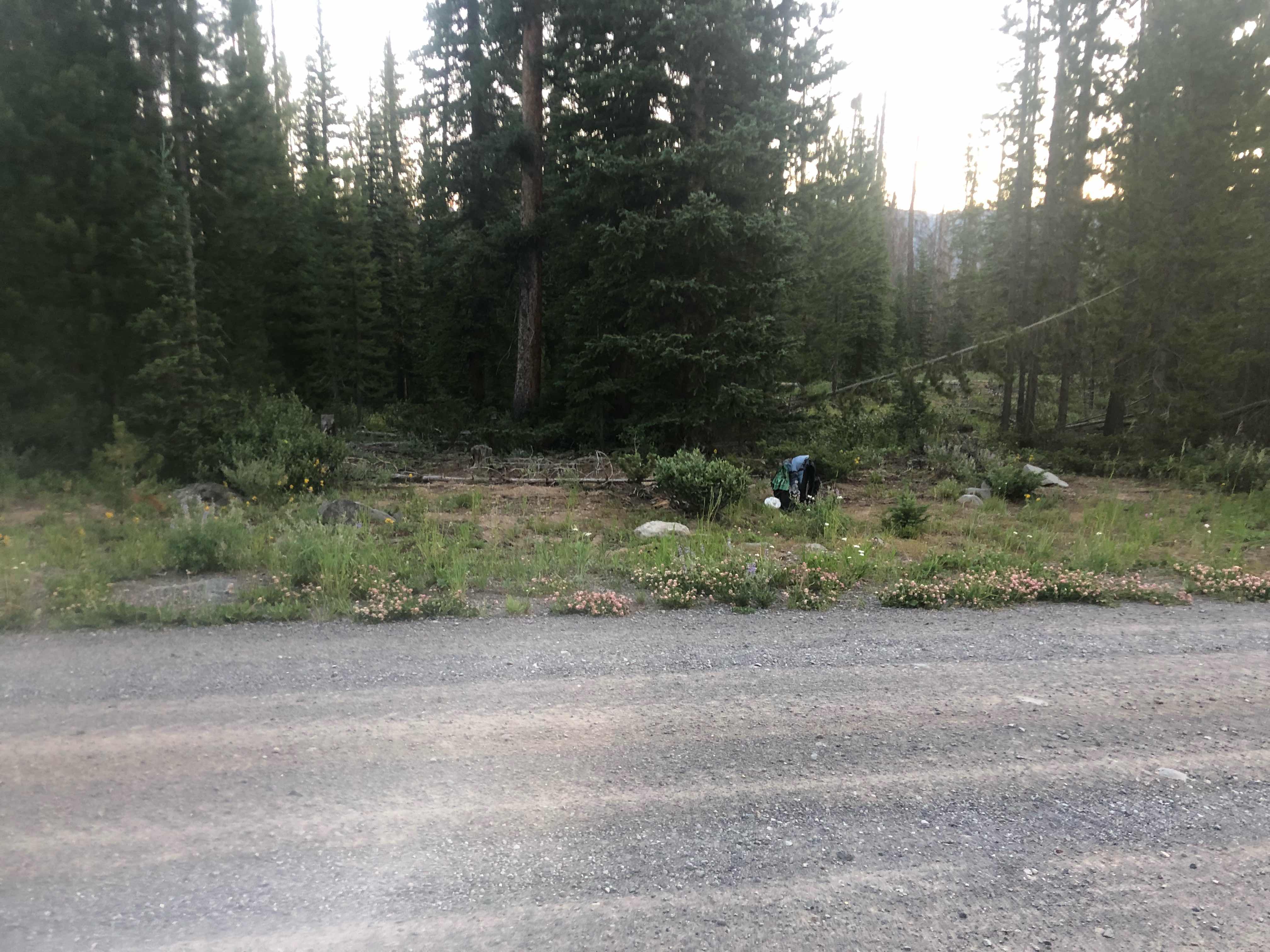 Literally camped on the side of a gravel road

"He who knows no hardships will know no hardihood. He who faces no calamity will need no courage. Mysterious though it is, the characteristics in human nature which we love best grow in a soil with a strong mixture of troubles."
- Harry Emerson Fosdick