In a recent blog post I talked about my desire to make it to camp early and to be asleep before dark. Well, last night I got my wish. I was asleep before 9:30, which is when it gets dark. I felt very refreshed when I woke up. I packed up quickly and I even got to use the privy instead of digging a hole. I was hiking north by six thirty. When I got pack on trail I saw several tents at the trail head. I even saw somebody cowboy camped on top of a picnic table. Without a doubt these were fellow thruhikers. I haven’t seen another NoBo hiker since I left Dubois. I was hoping a few of them might catch up to me. Shortly after leaving the trailhead the trail climbed to Aldous Lake. I was glad I didn’t camp there. The lake wasn’t very pleasant looking. 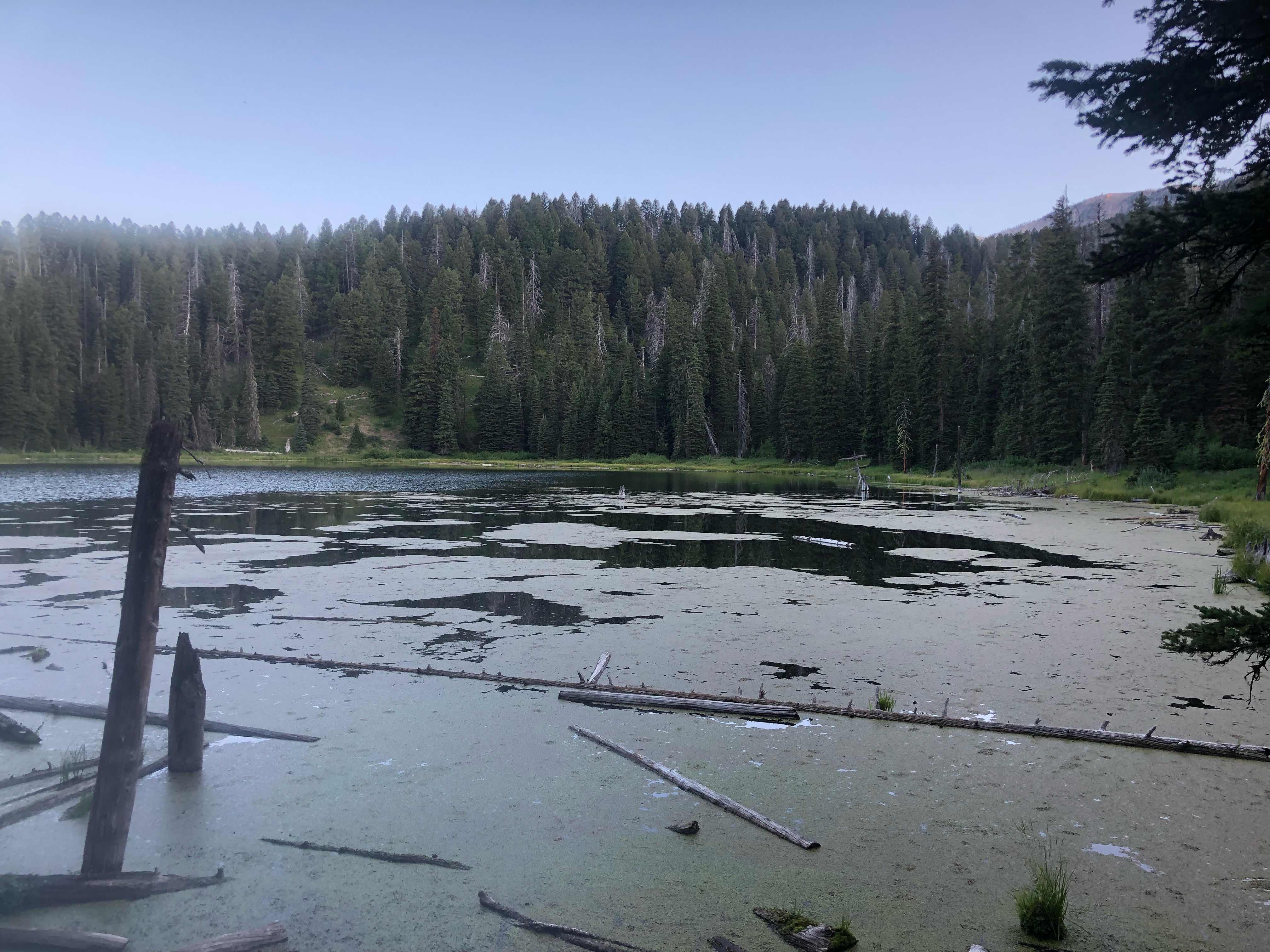 Yuck
A few miles after I passed the lake I hit another bushwhack section of trail. I don’t know why I bother calling it a trail. All I had to go on was a general route. I climbed up and over a saddle then dropped down through an entire hillside of downed trees. It was very slow going. I hoping that this isn’t my new normal. The mosquitos have been better, but the biting flies are just as bad. I’m constantly amazed at what I can get used to, but I’m hoping that bushwhacking my way to Canada isn’t in the cards. 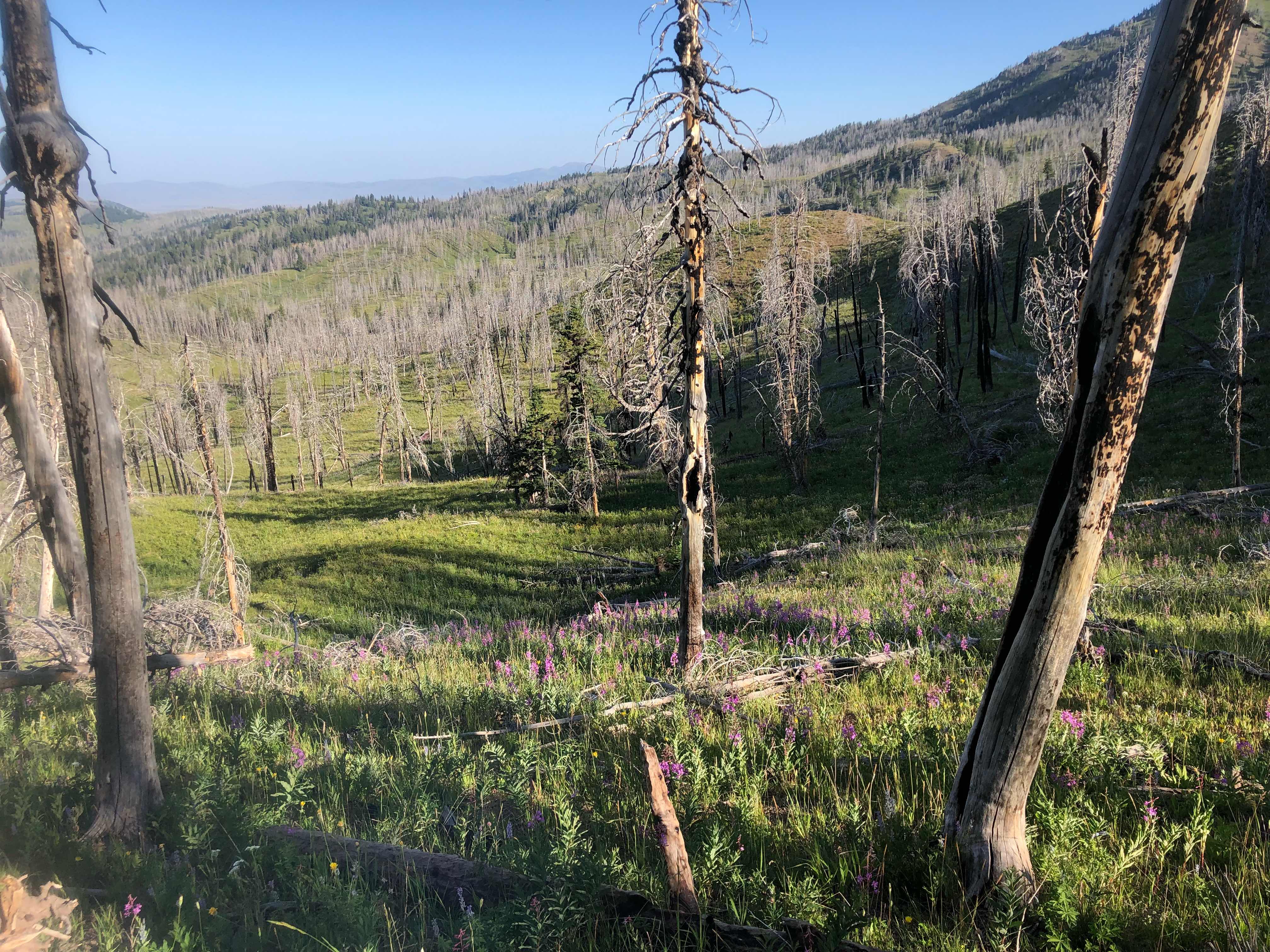 No visible trail
As I was taking a break and trying to figure out where the trail went two hikers caught up to me. Grasshopper and Anchor are two new faces for me. Grasshopper is from France and Anchor is from Switzerland. Anchor hiked the PCT in 2016, but our paths never crossed. We would leapfrog each other for the rest of the day. I enjoyed having other hikers to chat with during my breaks. I also saw two SoBos today. I’m definitely seeing the SoBo hiking bubble now. I think that I have seen at least one per day since leaving Yellowstone. 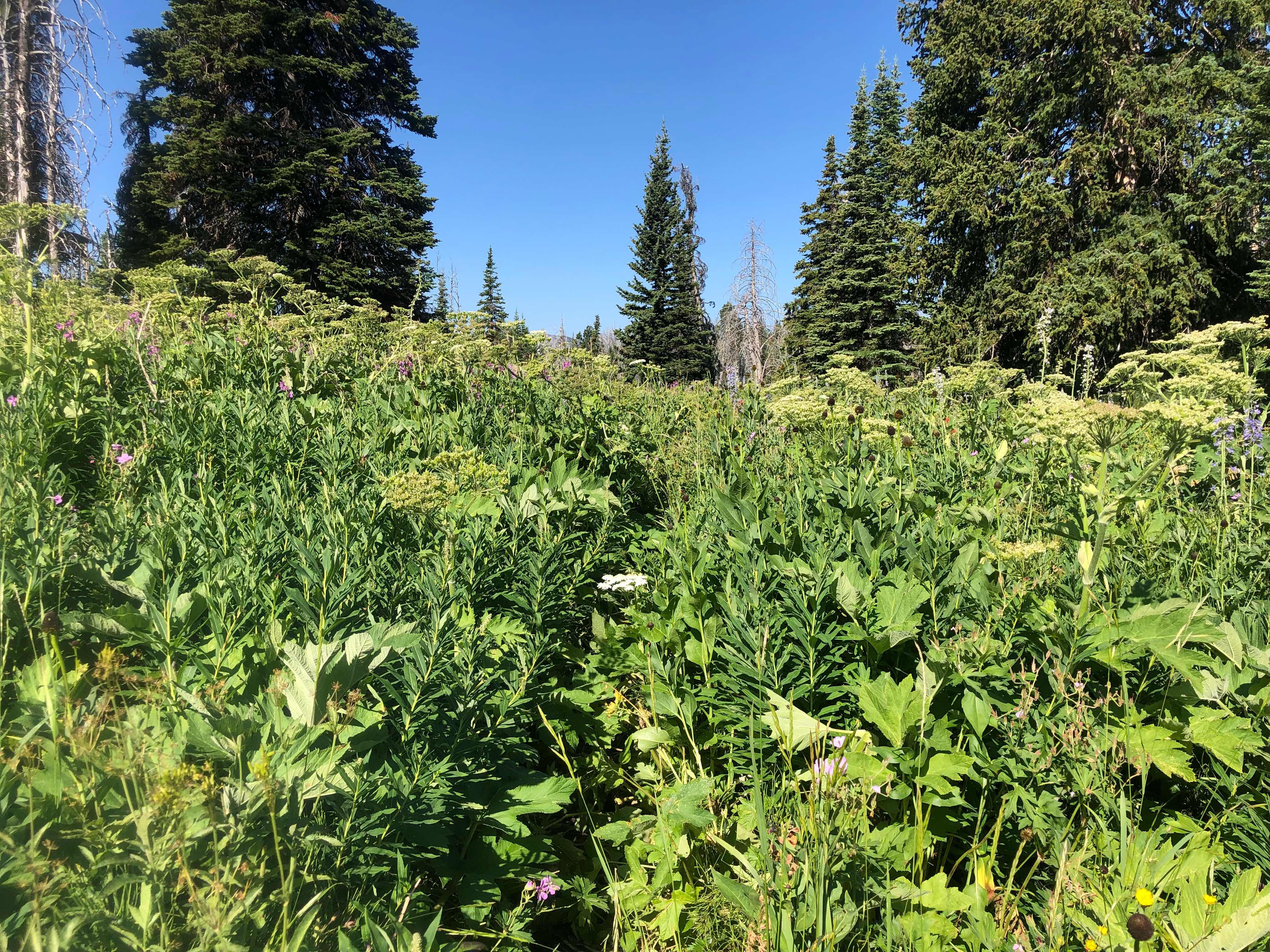 Seriously overgrown trail
Once the bushwhack was over with I had a pretty substantial climb to contend with. It was in the middle of a fourteen mile dry stretch. I wish I had grabbed a little more water from the last source. The day was warming up quickly and the climb was more exposed than I thought it would be. I had less than a quarter of a liter, 3.6 miles until more water, and close to 1,500 feet of elevation gain. I pushed through the climb as quickly as possible. It was much easier than the elevation profile lead me to believe. 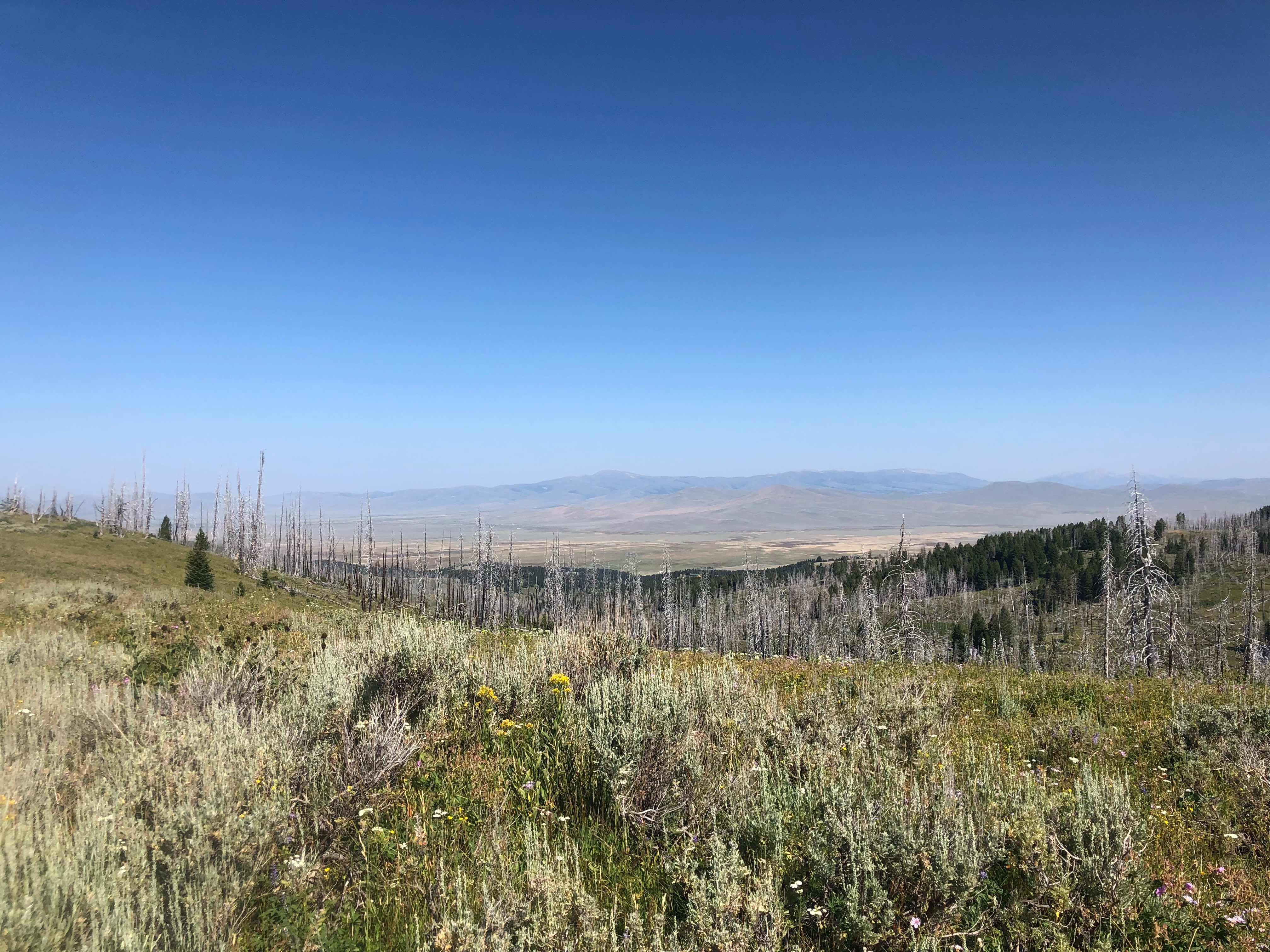 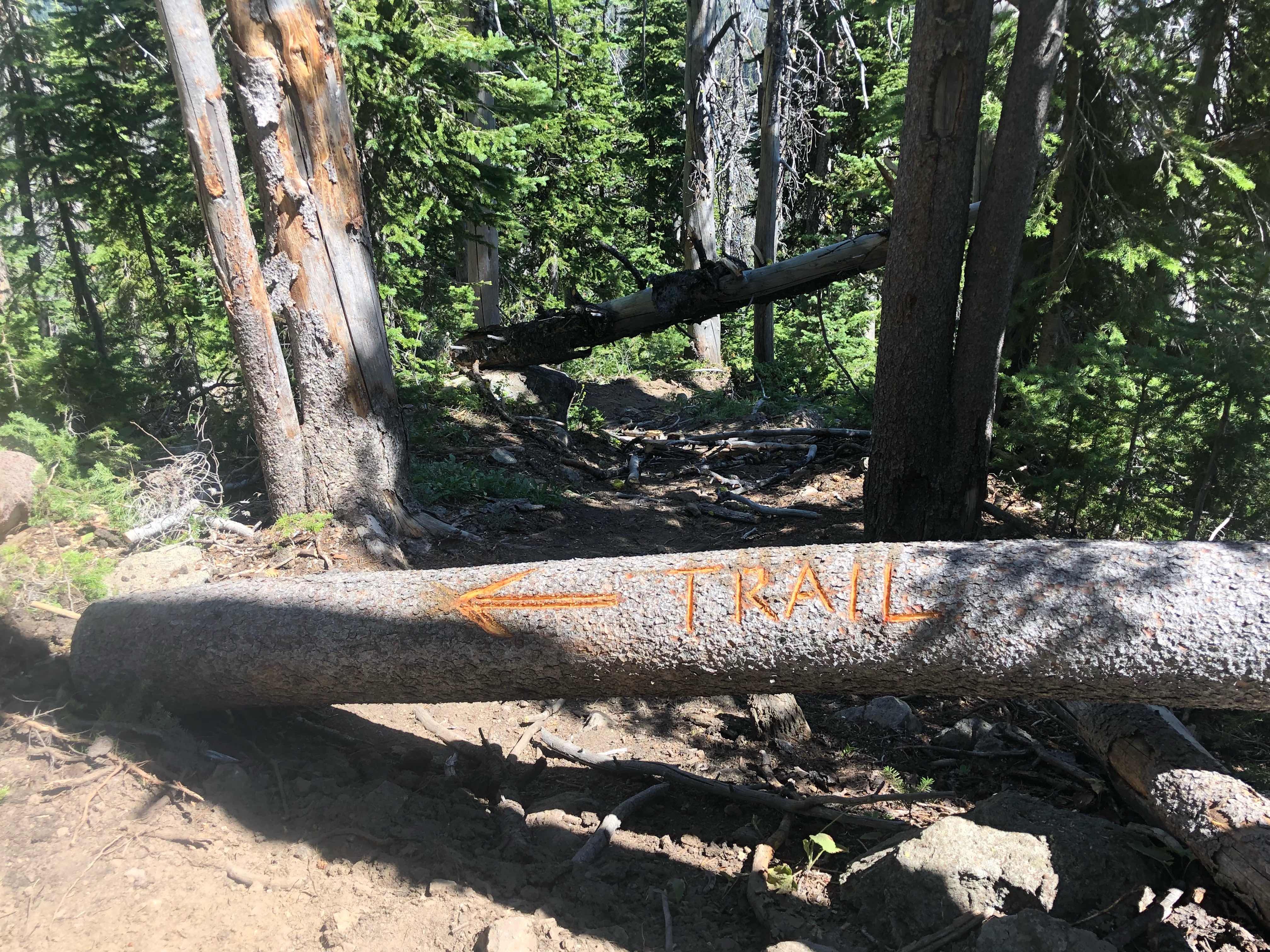 New trail construction
The spring I was heading towards had a few interesting comments written about it on my navigation app. Apparently this is a main water source for the sheep experiment station. When the sheep are grazing here they use this water source. Anytime the sheep are present so are the guard dogs. A few days ago a hiker posted that there was over 500 sheep and 10 dogs. The dogs were very aggressive and the hiker was scared to get water. I could see how this could be a major issue since the next listed water source is over thirty miles away. I was a little apprehensive as I approached, but there were no sheep or dogs there today. I did see a cowboy with his horse and mule. It looked like he had a pretty permanent camp set up. I grabbed a few liters of water and had a snack break. I had to wait 20 minutes to drink my water because it takes awhile for the bleach to purify it. Usually this isn’t an issue because I never show up to a water source with empty water bottles. I only had a few swallows left when I got to the spring. I sat down in the shade while I waited for the bleach to do its job. One of the southbounders that I spoke with told me about an unlisted water source about thirteen miles away. That information saved me from having to carry an extra two liters, which weighs 4.4 lbs. I left the spring with a liter and a half. I also drank a liter while I was there. 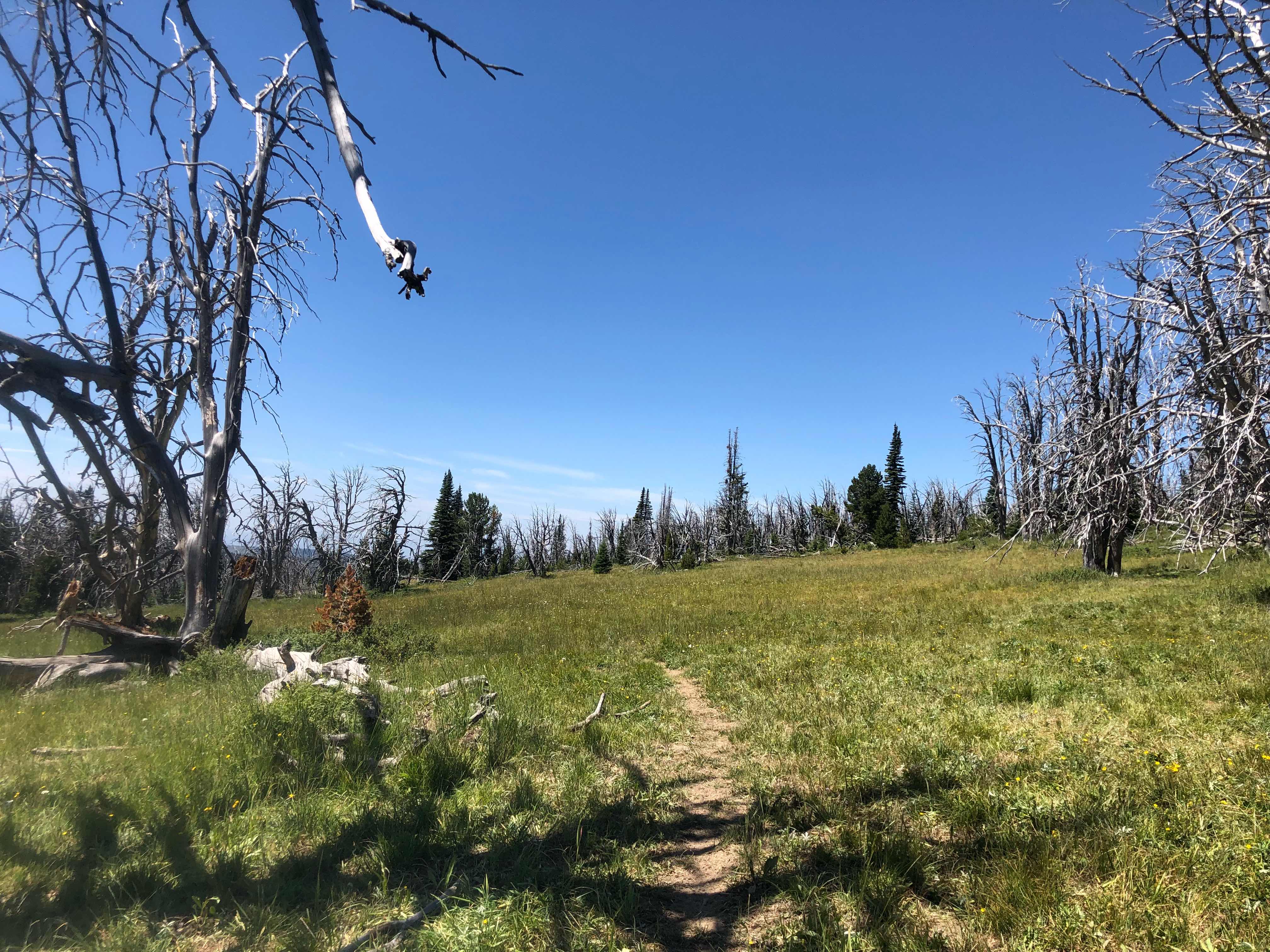 No sheep today
The rest of the afternoon was spent hiking up and down. Most of the climbs were short, but I had one steep one. I pride myself on how fast I can move uphill. Not too many people I have come across can outpace me on a good uphill climb. Well today I got absolutely destroyed. Grasshopper flew past me like I was standing still. I’m not sure I could have overtaken him if I had dropped my pack and started running. I was very impressed. When I finally caught up to him I piled on the praise. It was very impressive. He said that was pretty unusual for him to hike that fast uphill. He just really enjoyed this particular climb. I’m not sure if he was just being humble or if it was a one time kind of thing. I think it was probably the former. 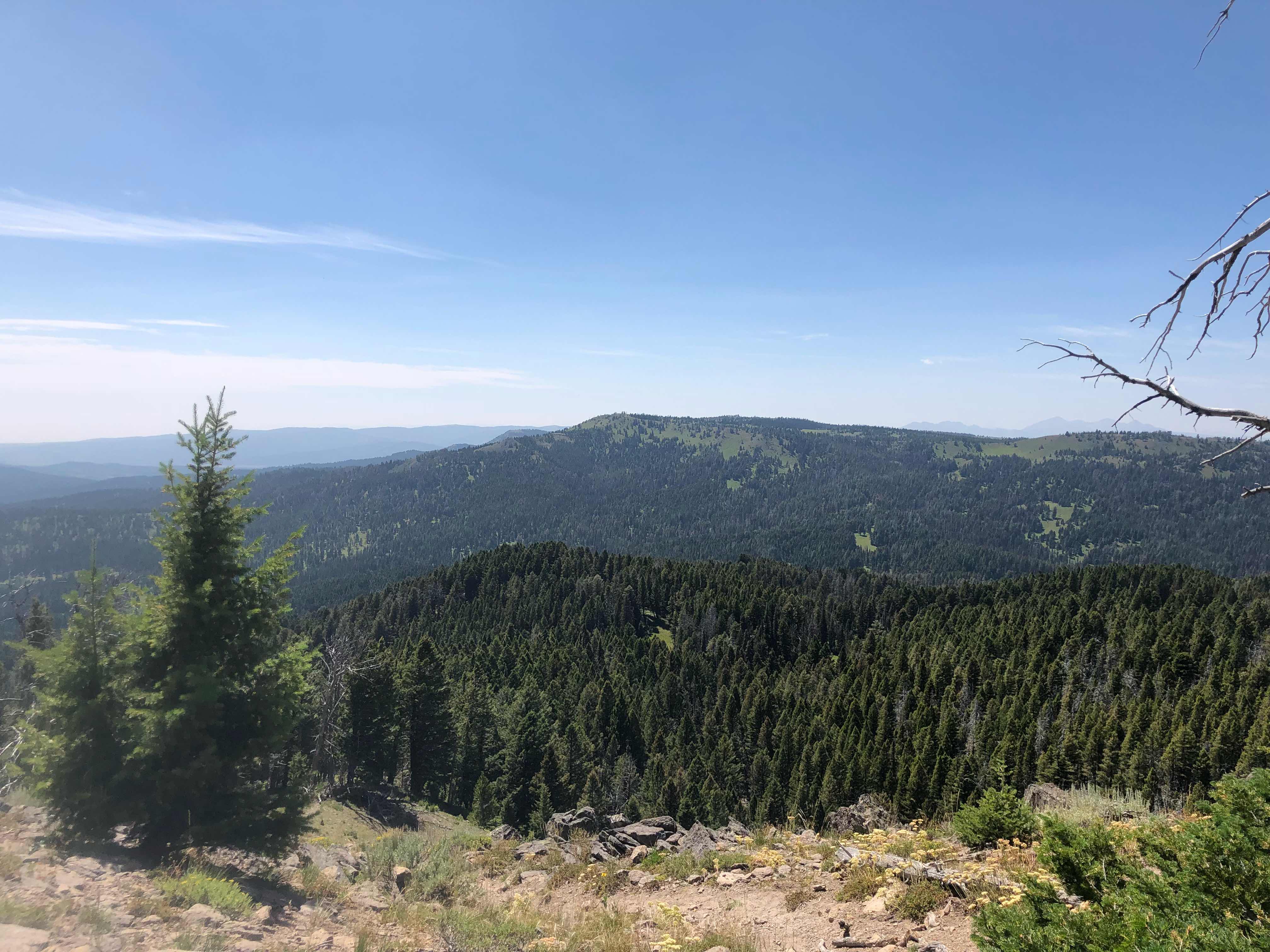 View from the top
The rest of the late afternoon passed rather quickly. I took one last break before my final push into camp. I didn’t take very many breaks today. I was feeling really well rested and energized. I wish I could always get eight hours of sleep. I could really tell a big difference. The last four miles of the day was spent hiking on a dirt road. The cdt follows this road for fifteen miles total. I’m also back into cattle country. It has been a long time since I have been hiking through this type of terrain. This particular herd is huge and spread out over several miles. I think I’m going to have to pick up a Sawyer water filter ASAP. Bleach is great unless I’m sharing a water source with hundreds of cows. 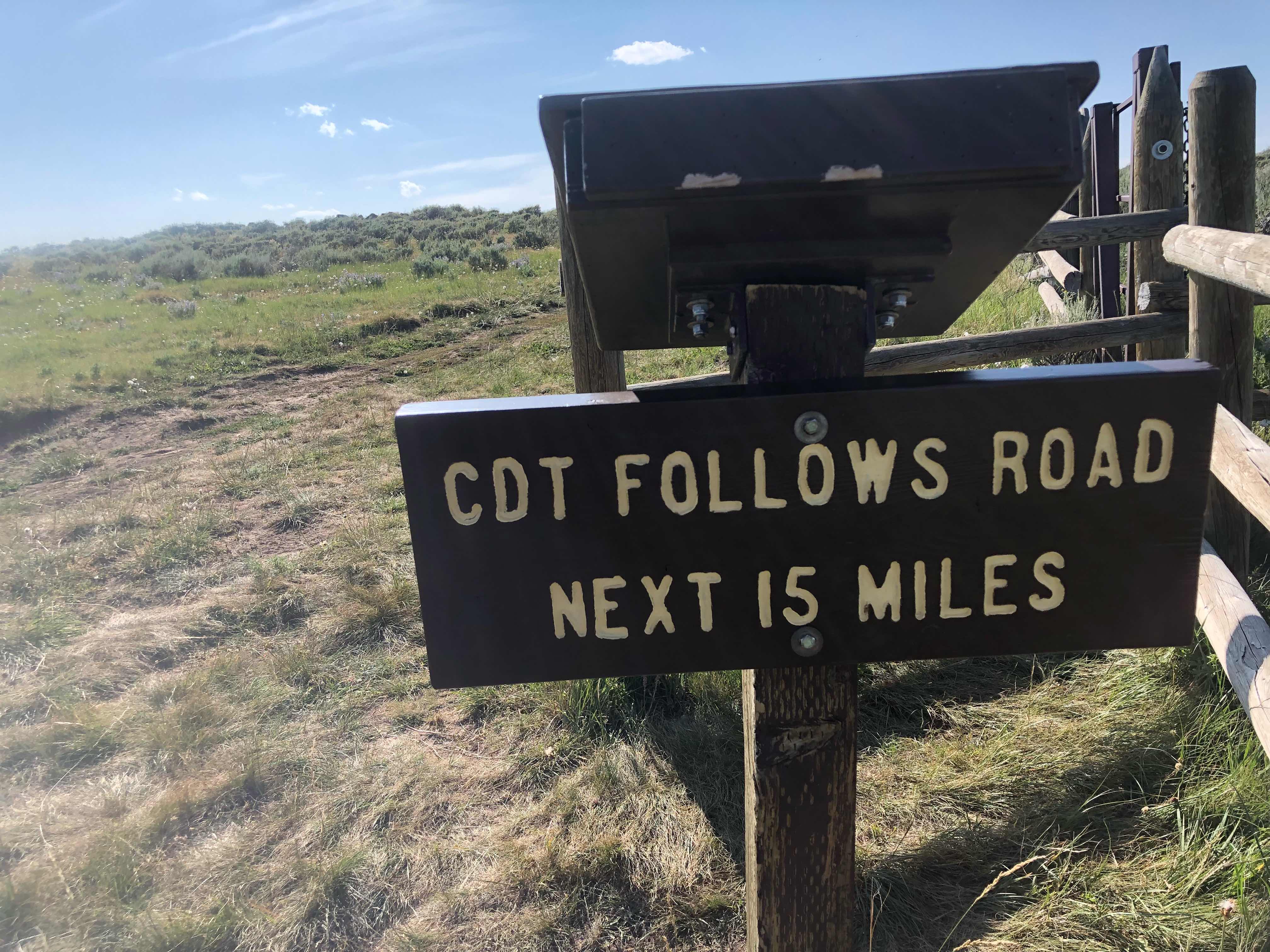 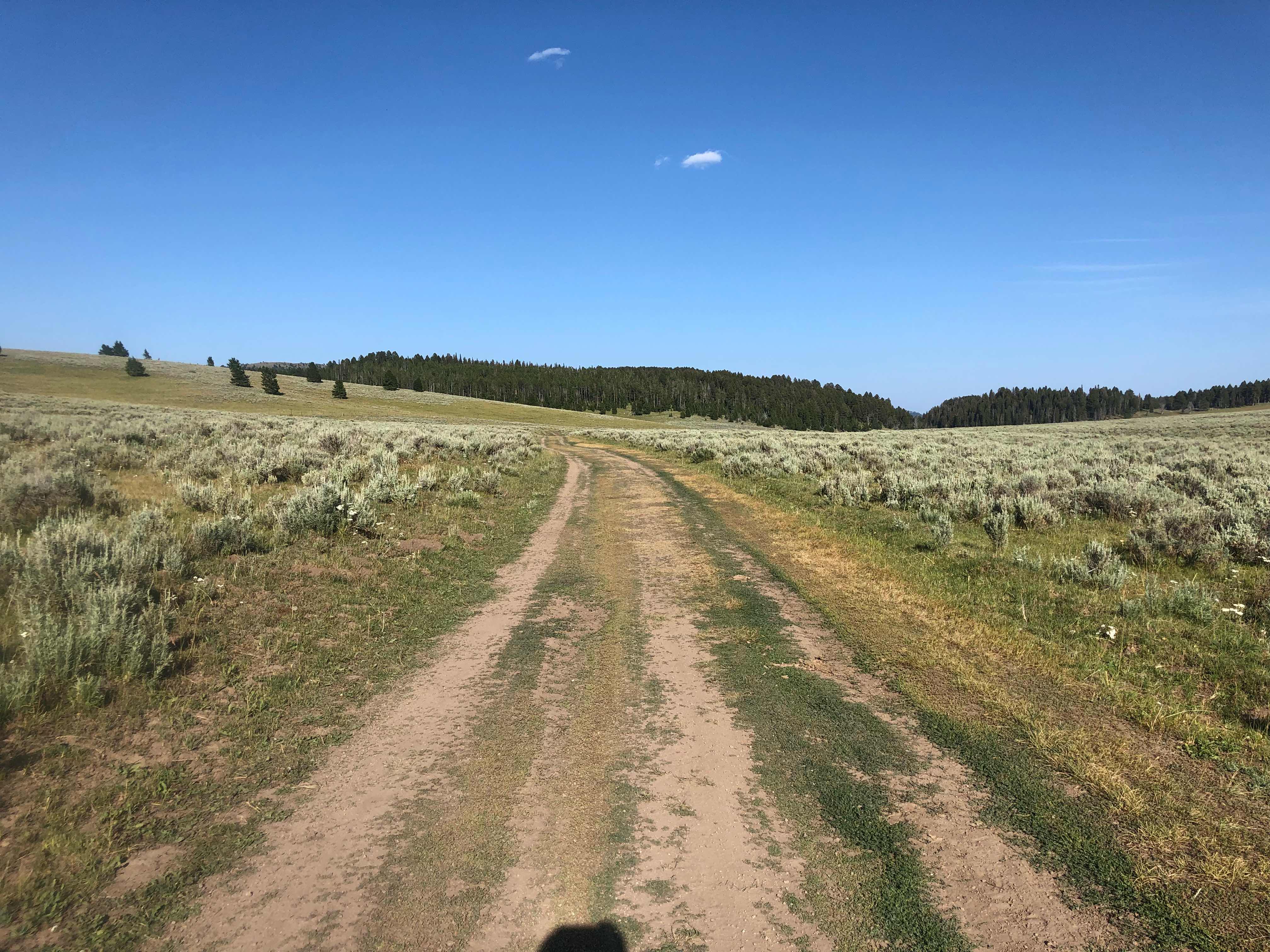 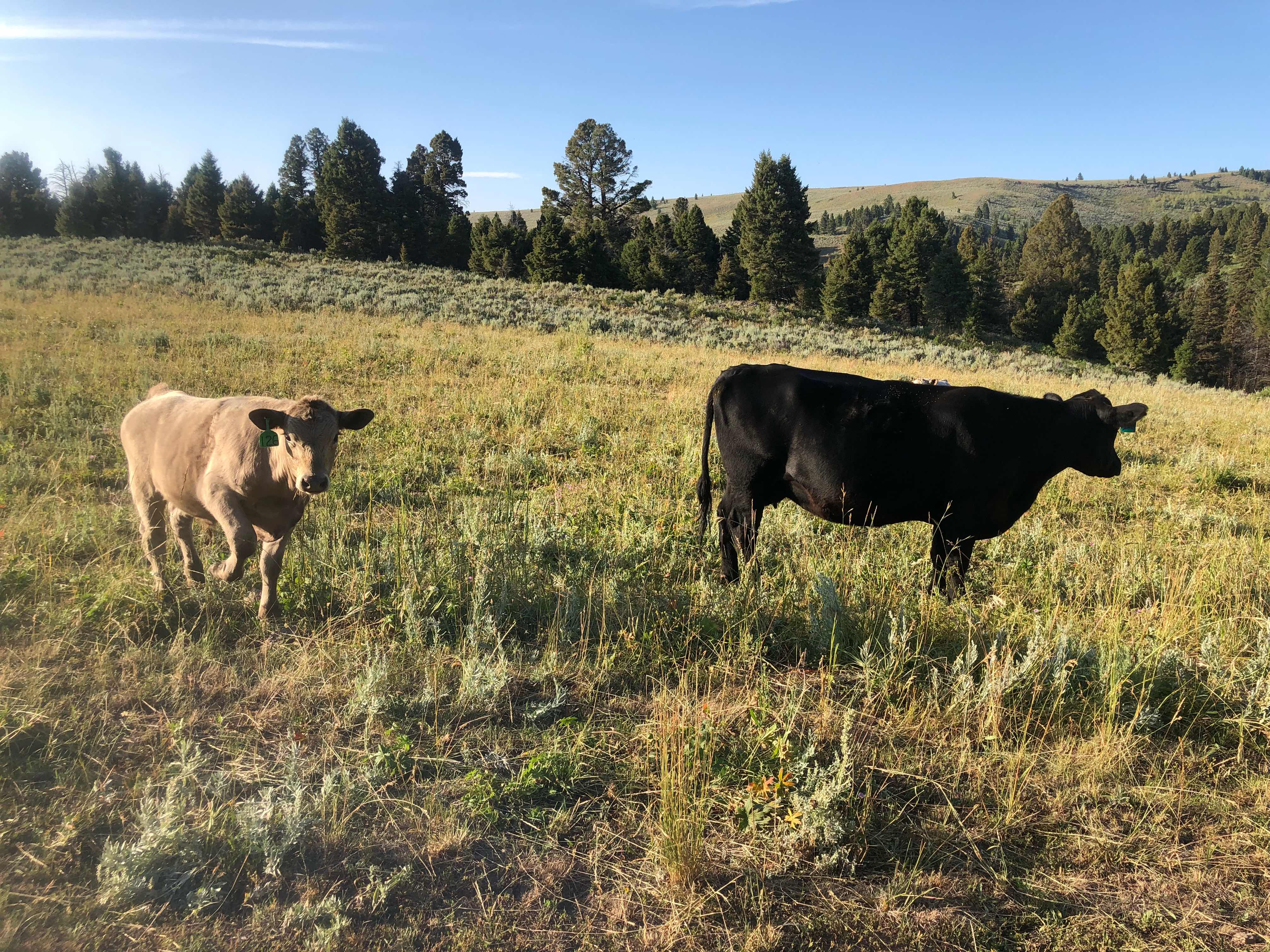 Back in the land of Moo 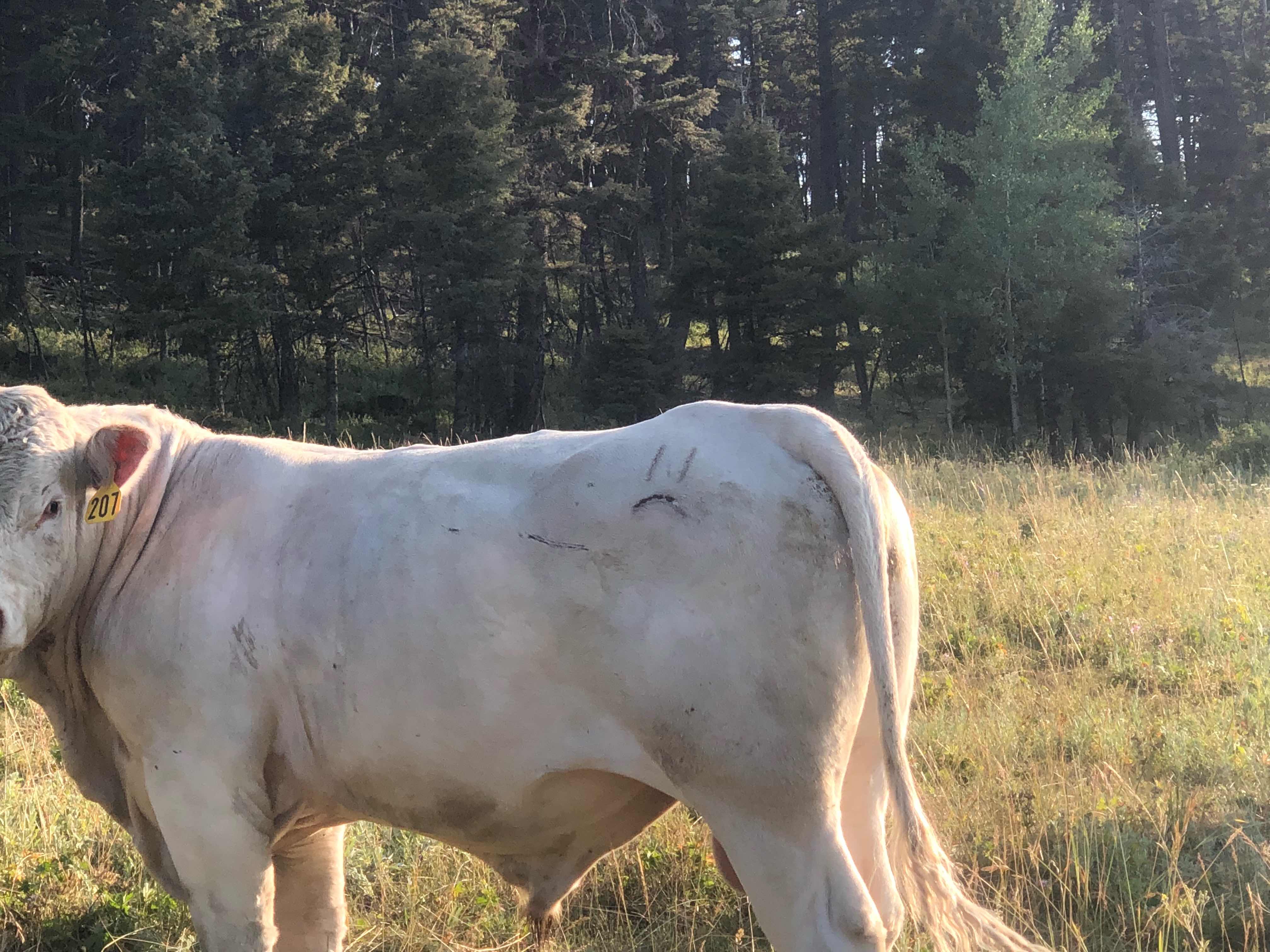 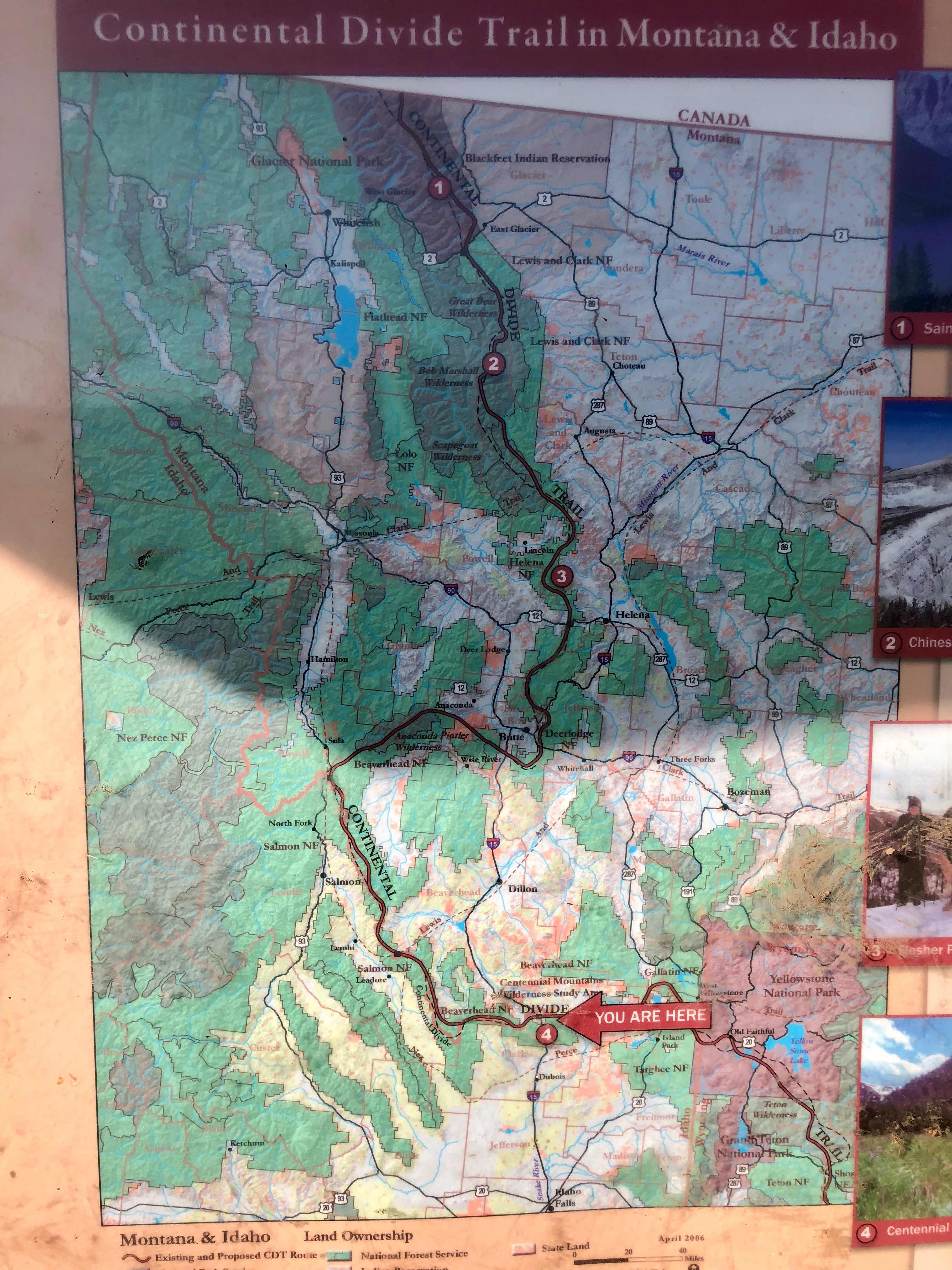 What I have left of the trail
I found great spot to camp in. I thought I would be in between the herds of cattle, but that didn’t quite work out. I am overlooking some rolling hills and big mountains. I feel pretty safe cowboy camping and not hanging my food tonight. This allowed me to set up and start eating dinner quickly. Eventually Grasshopper and Anchor showed up. They liked my campsite so much that they stayed. Then a guy named Snake Farmer showed up, he liked my choice as well and he stayed. I hadn’t finished eating yet when Enigma, Slingshot, and Cleansweep arrived. They liked my spot, but there were no more flat spots in the area. They hiked a little closer to the interstate before setting up camp. I haven’t seen Cleansweep and Slingshot since Twin Lakes. It was great to catch up. After so many days of not seeing anyone going nourthbound it was a little overwhelming to have so many people arrive in my camp within minutes of each other. I haven’t camped with anyone else since just before Grand Lake. We will all try to get a ride into Lima, MT tomorrow morning. 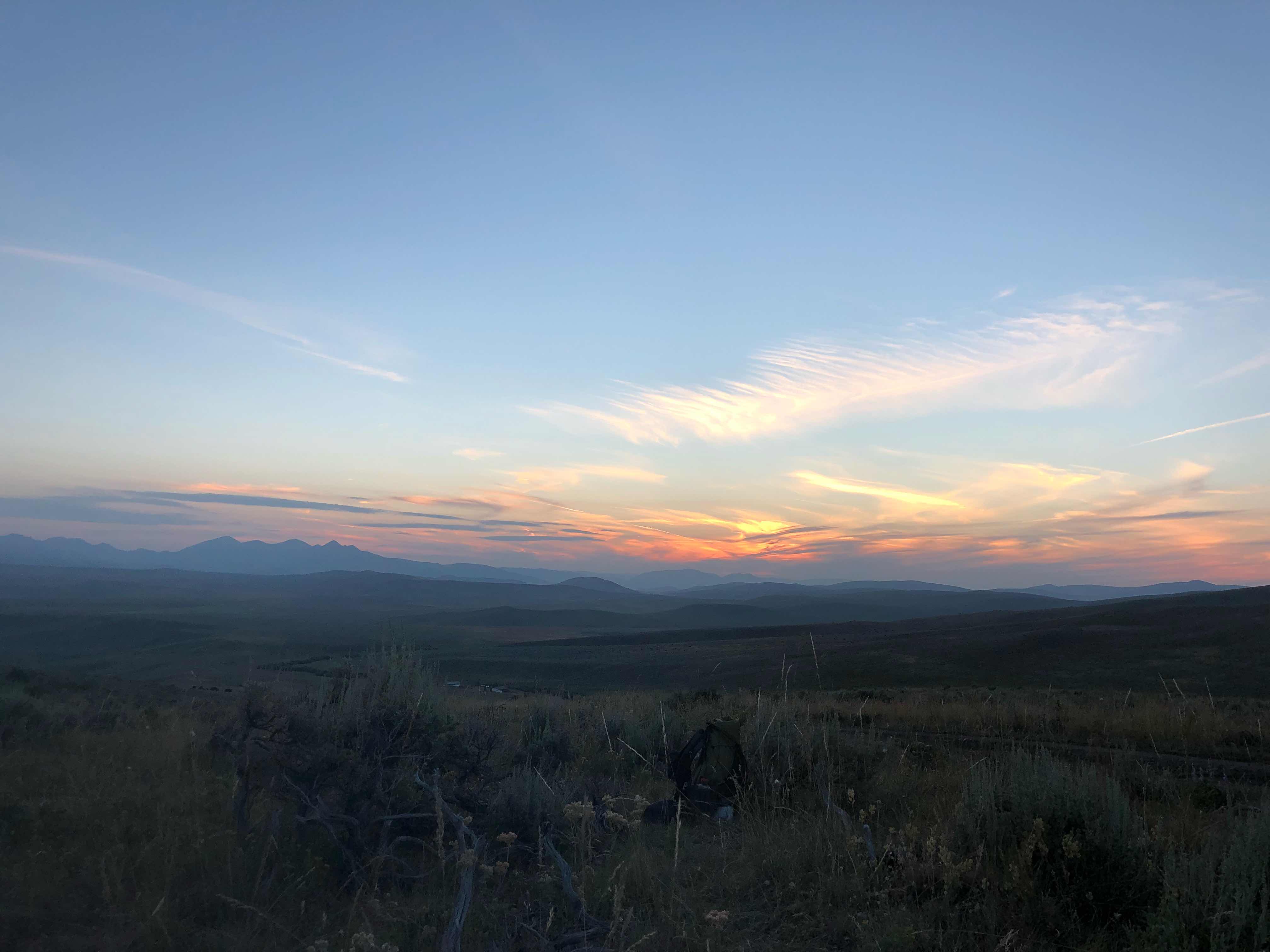 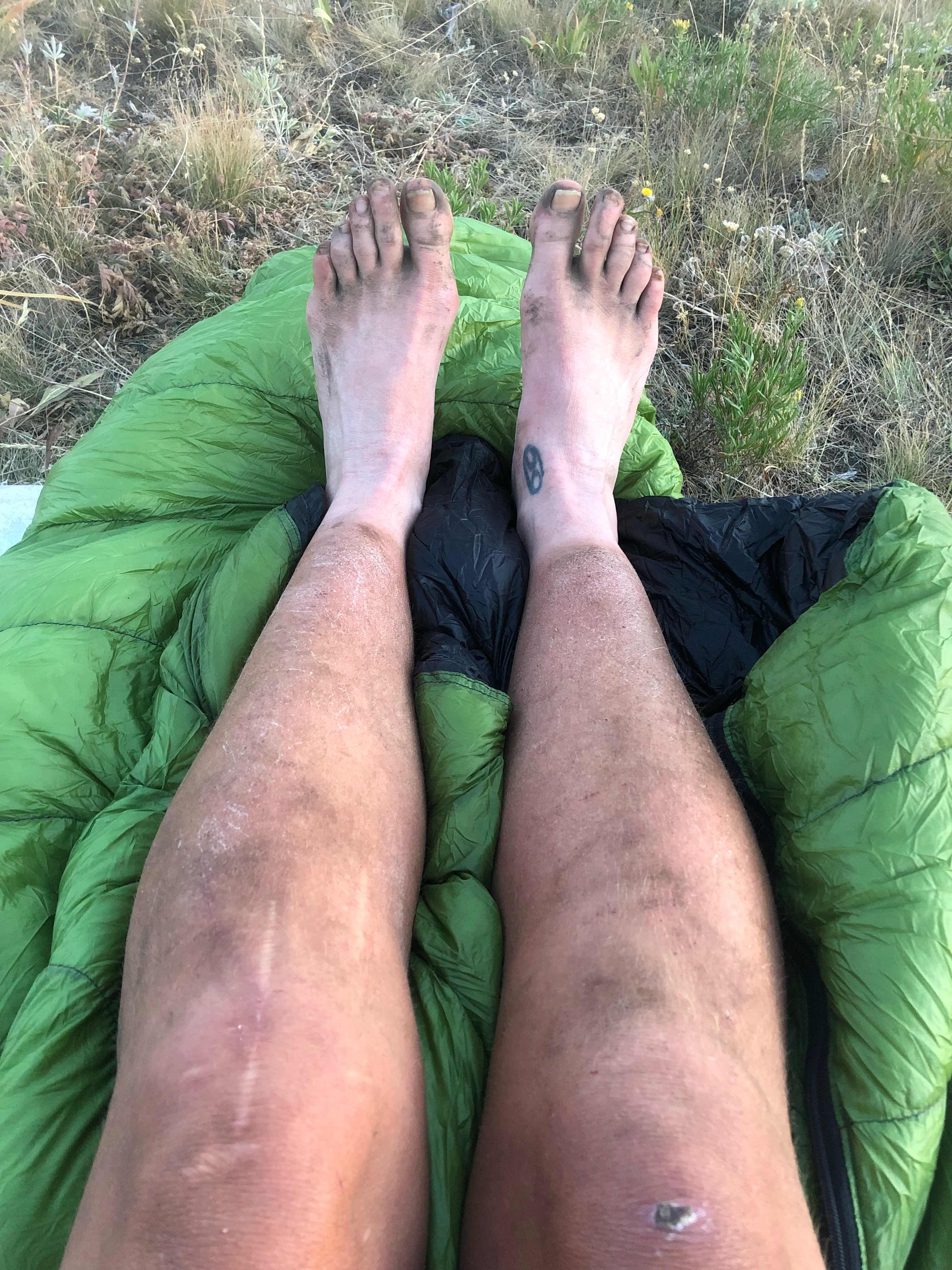 I can’t wait to take a shower 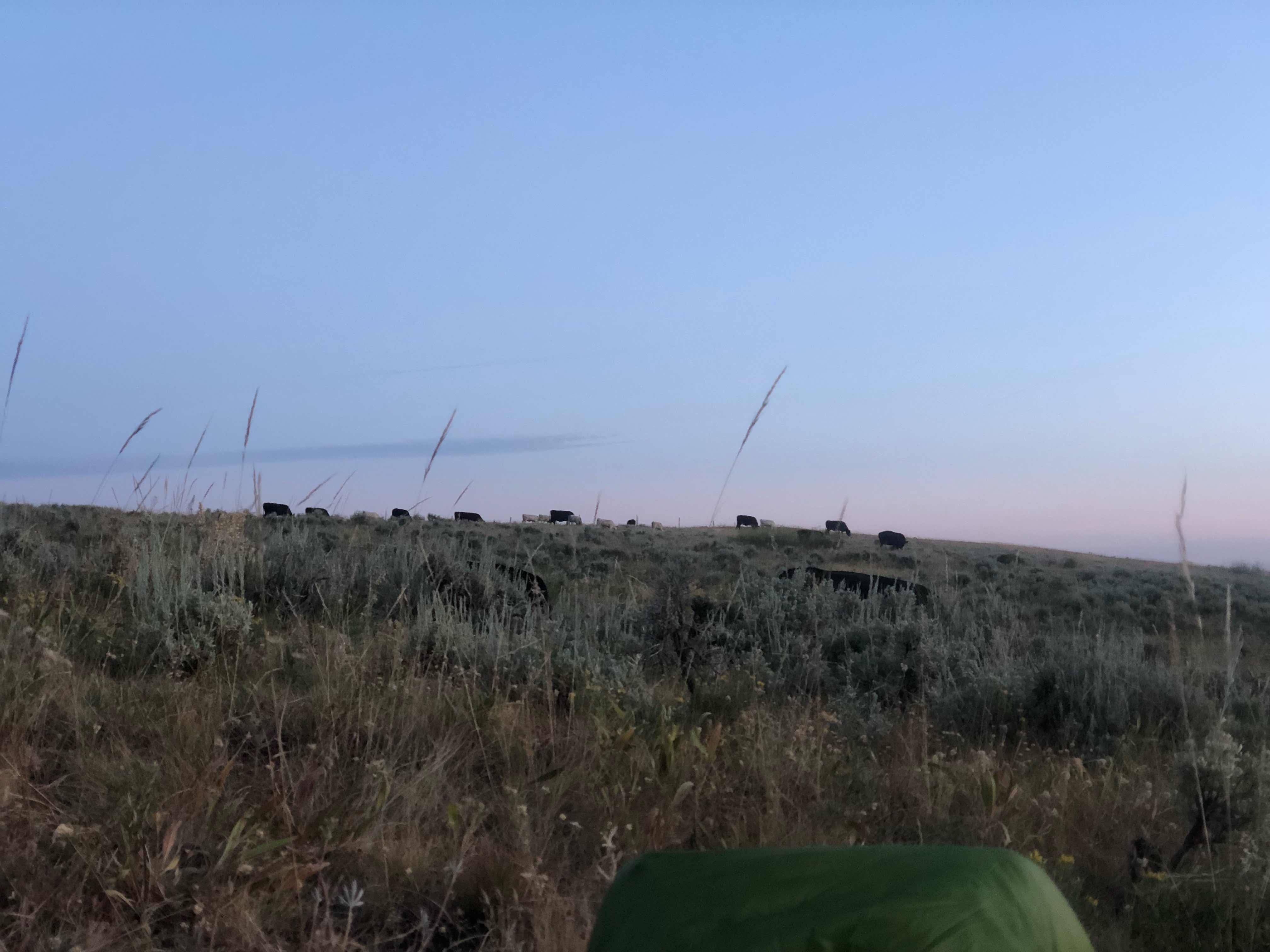 Small part of the herd moving in 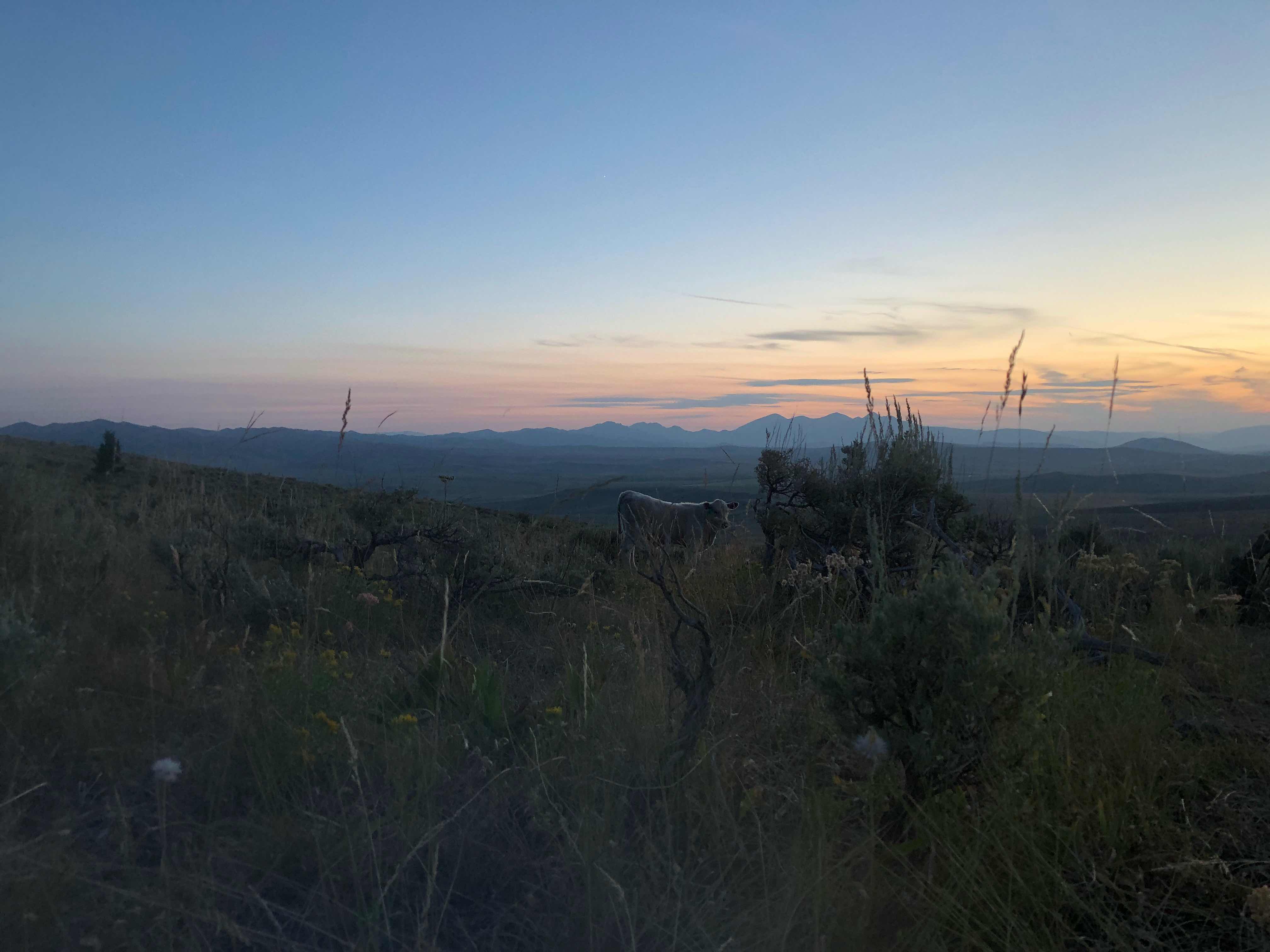 “He who has a why to live can bear almost any how.”
- Friedrich Nietzsche