Since I was up past midnight last night I decided to treat myself by sleeping in. The only problem was that my body had other ideas. I woke up at my usual time of 5:25 and from then on out I dozed on and off until my alarm went off at seven. I still had several things I had to take care of before I could leave town. Mainly I still had to resupply and finish writing yesterday’s blog. I decided to skip eating breakfast at a restaurant. Expenses have really been adding up lately. I went to the grocery store straight away. I was able to get everything that I was looking for. In some towns finding my carnation breakfast essentials has been difficult. I bought a bagel and Starbucks coffee drink at the grocery store and consumed them while I finished the blog. I repackaged my food and packed up my gear. When I fixed my backpack last night I had to undo a lot of my micro settings. It took me over a month to get my pack dialed in just right, so I was a little frustrated to have to start again from scratch. Hopefully it won’t take me another month to get everything dialed in again. While I was waiting to see what Ripple and Clouds plans were for the day, I noticed that a section of trail close by was closed due to a fire. The section was only four miles from where I got off of the trail yesterday. I was a little bummed out because that section was walking on the actual divide. The good news is that there was a reroute so I did t have to skip around the fire. Checkout at the motel was at ten o’clock. I still hadn’t seen Clouds and Ripple, but I was getting antsy and it was time to go. I went to the lobby to turn my key in and the lady said that Clouds and Ripple has just checked out as well. I dashed outside, but couldn’t find them. I was surprised that they just left without saying goodbye, but then again maybe they came by while I was at the grocery store and thought that I had already left.
I wasn’t exactly sure where I should try to hitch from. I needed to go 20 miles west on I-70 to get back on trail. I decided to try and hitch from a gas station located right off of the interstate. It ended up being a really weird intersection. I had zero confidence in finding a ride there. I checked to see if I could just get an Uber, but there weren’t any cars available. I stuck out my thumb with no hopes of getting a ride quickly. I wasn’t standing there long when a truck stopped and asked where I was heading. The driver Dylan, was heading to Breckenridge and agreed to give me a ride. He had hiked a section of the Colorado Trail last summer and was familiar with hikers needing a ride. We had a great conversation on the way back to the trail. I still can’t believe how lucky I was.
I walked alongside I-70 for about 4 miles, it wasn’t a very enjoyable start to the day. I eventually got to a trailhead called Herman Gulch. I expected there to be a notice about the trail closure, but nothing was posted. There were a ton of cars in the parking area and I talked with a few people who had just hiked up to a lake off of the Continental Divide. They said that there was nothing posted farther up trail about a closure. I couldn’t find a map online of where the reroute was taking me. I had zero info for water sources along the reroute. I made the executive decision to just stick to the cdt. I wasn’t comfortable with hiking into an unfamiliar area without a map or info for water.
The first part of the hike was overrun with day hikers. I like that people are willing to get out onto the trails in Colorado, but some of these folks need an education in leave no trace ethics and trail etiquette. I’m pretty sure I have mentioned this before, but if I can help educate anyone I think it is worth mentioning again. When you are hiking the uphill hiker has the right of way. If you are coming downhill and see someone coming uphill, stop and move to the side. It is that simple! Now onto leave no trace ethics. If you pack it in, pack it out. It is that simple. For gods sake do not carve your name in a tree, bench, or rock. That is considered graffiti and it will be there forever. I saw all of these things and more today. 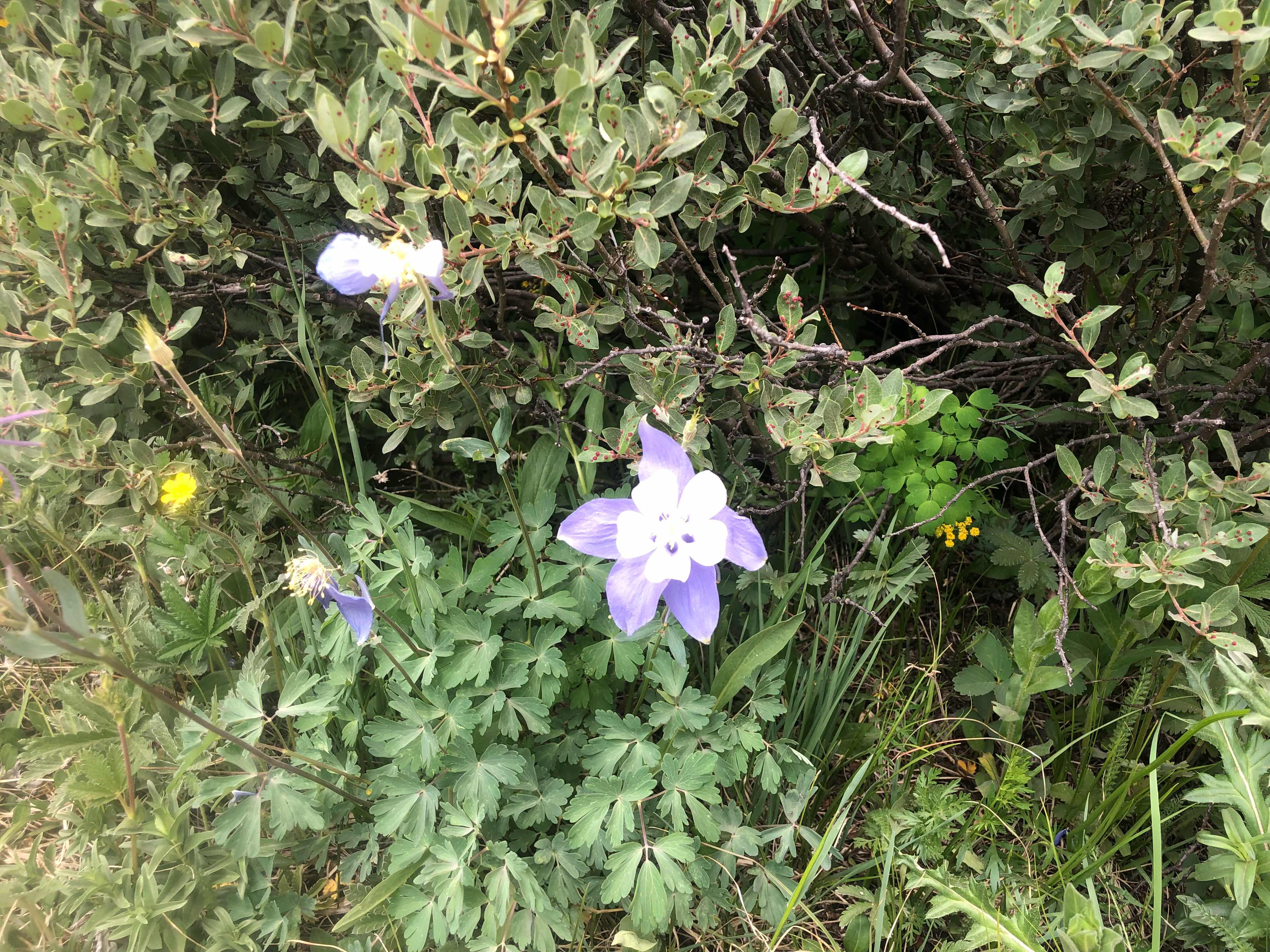 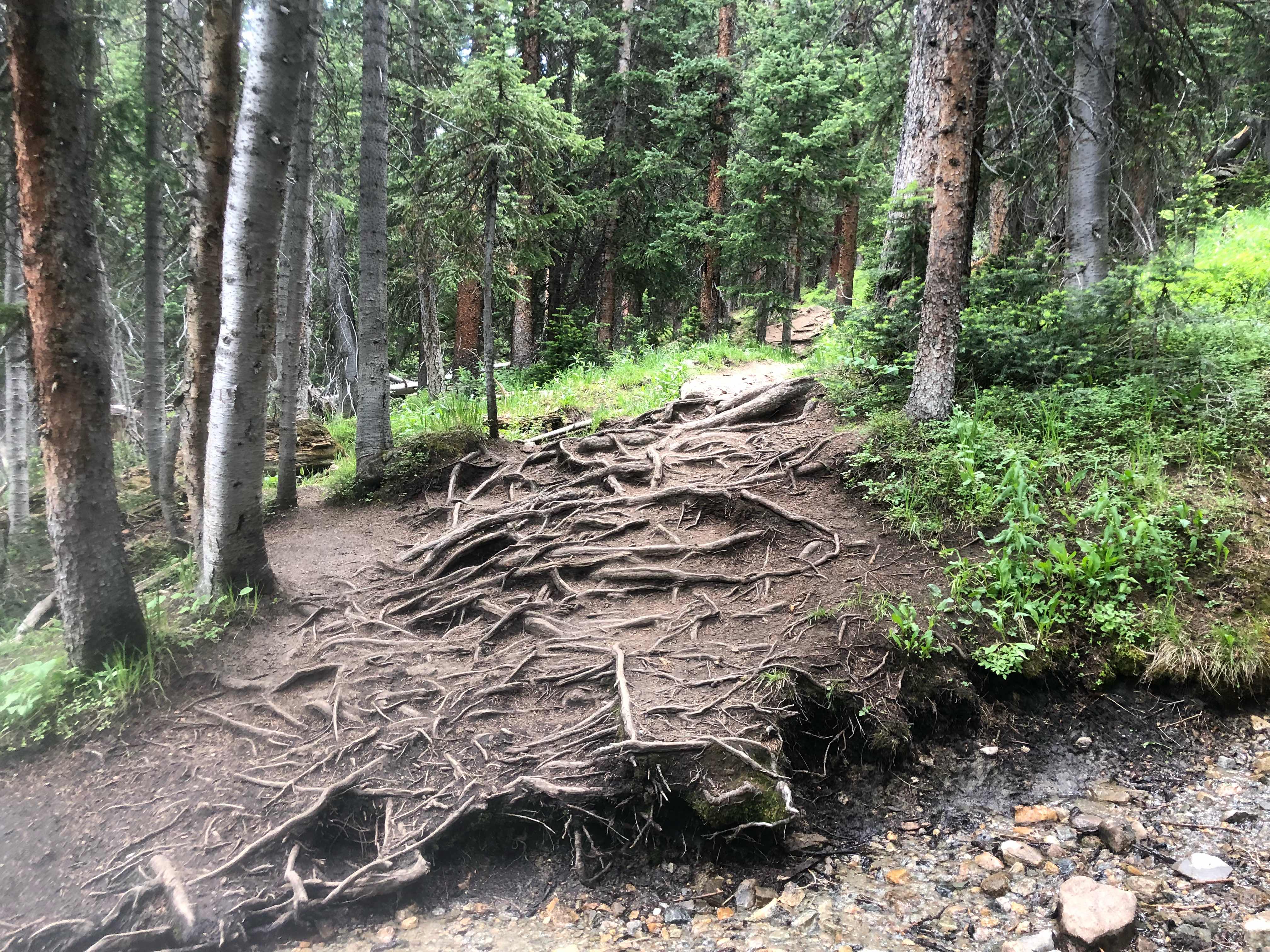 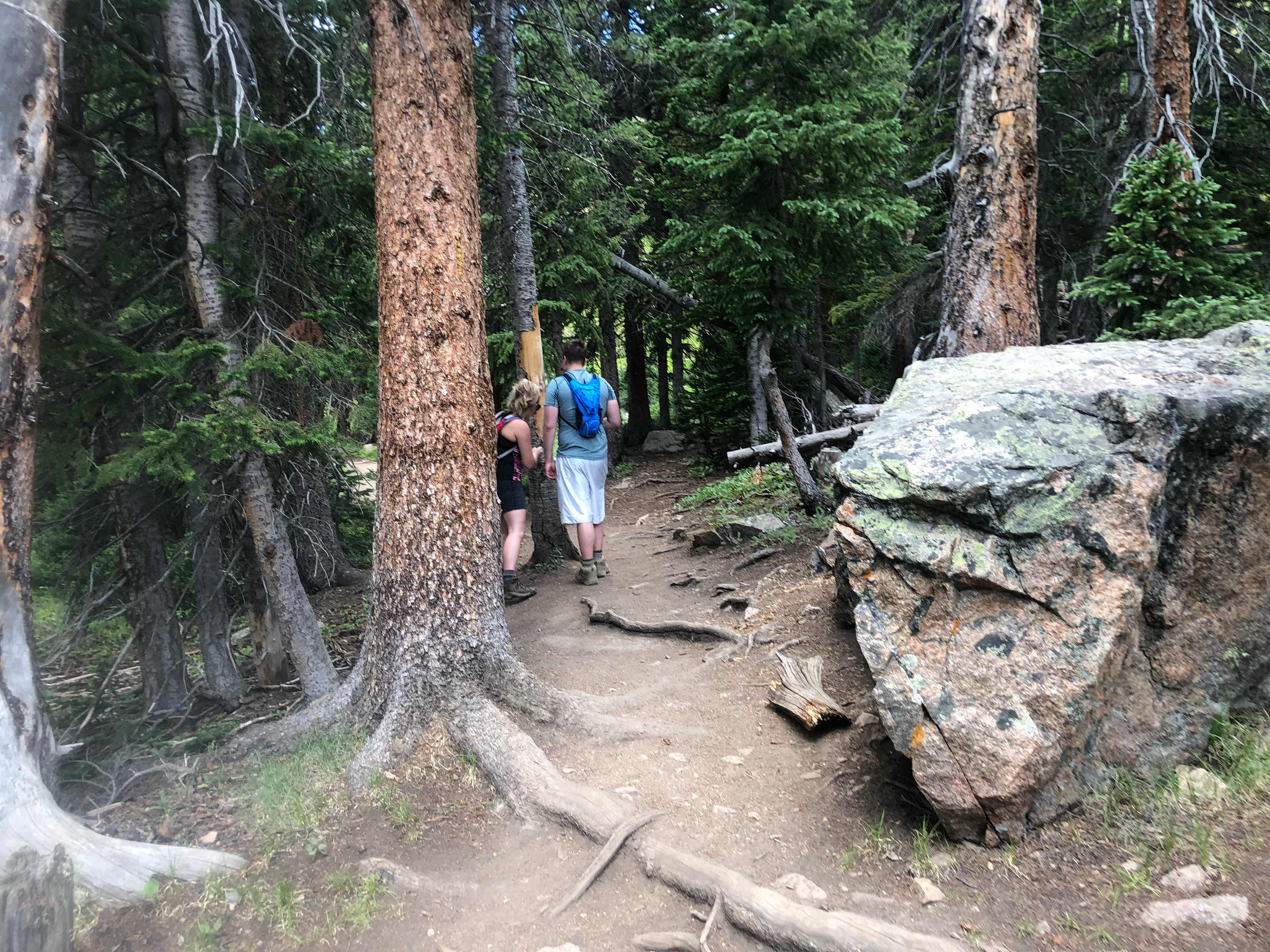 Vandals carving their initials into a tree. I had words with them about this
Shortly after speaking with the vandals I checked my Guthook app to see about upcoming water sources. For some reason it wasn’t logging my location. I took a break next to a stream to try and figure out what was going on. I didn’t want to continue hiking without my app working properly. I checked all of my settings and they were fine. I restarted my phone 3 times and still nothing. I thought that maybe the satellites in the area were down, but that seemed unlikely. As I was trying to figure it out another thruhiker came by. Casper was a completely new face to me. I asked her if her Guthook app was working and she said it was. I checked my phone one more time and low and behold it was working. Casper and I chatted about the ridiculousness of the cdt route to Gray’s peak. She had done it late yesterday and said that she had a panic attack going across. I told her how much of a badass she was for doing it alone and at the end of the day. We hiked together for a little bit, but I lost her when I had to stop for a pee. 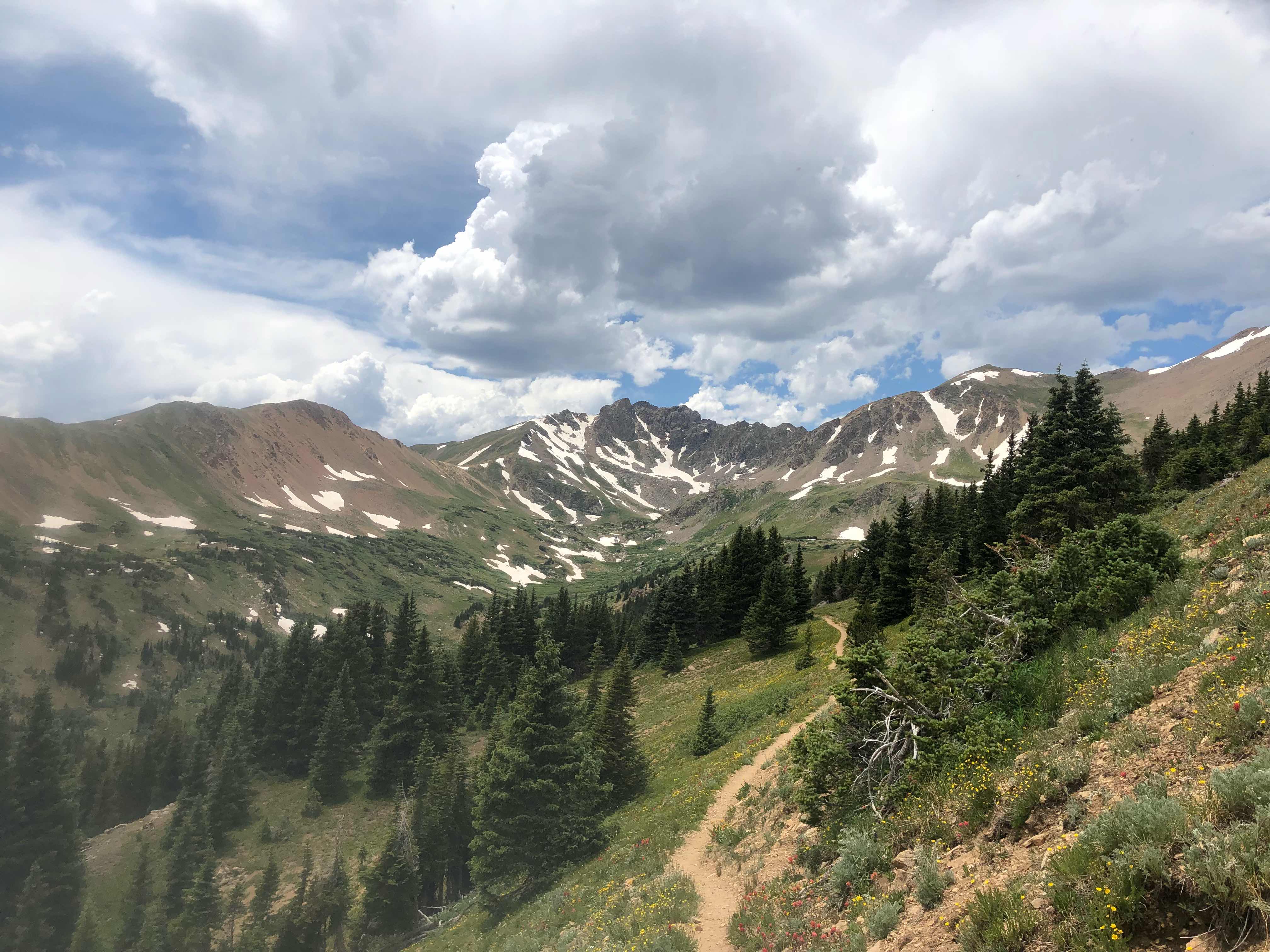 Hiking up to the Divide
I realized that when I was in town I forgot to check the weather. I really didn’t like what I was beginning to see. Dark clouds were really beginning to build. I was rethinking my plan of hikingvthe cdt instead of the reroute. For the remainder of the day I would be between 12,000 and 13,000 feet on a very exposed ridge line with no quick way to get down to safety. Hiking along the divide today was a piece of cake after yesterday. The tread was very easy and the exposure was not a concern. I knew that at some point while hiking in Colorado a late afternoon thunderstorm could catch me at high elevation. Quite frankly, I’m surprised that it hasn’t happened before. Thunderstorms at 12,5000 feet are no laughing matter. I could here thunder reverberating off of the surrounding mountains. I was being hemmed in on all sides by very threatening clouds. Up until this point of the day I had really been dragging ass. Nothing like a little thunder and lightening to put some pep in your step. 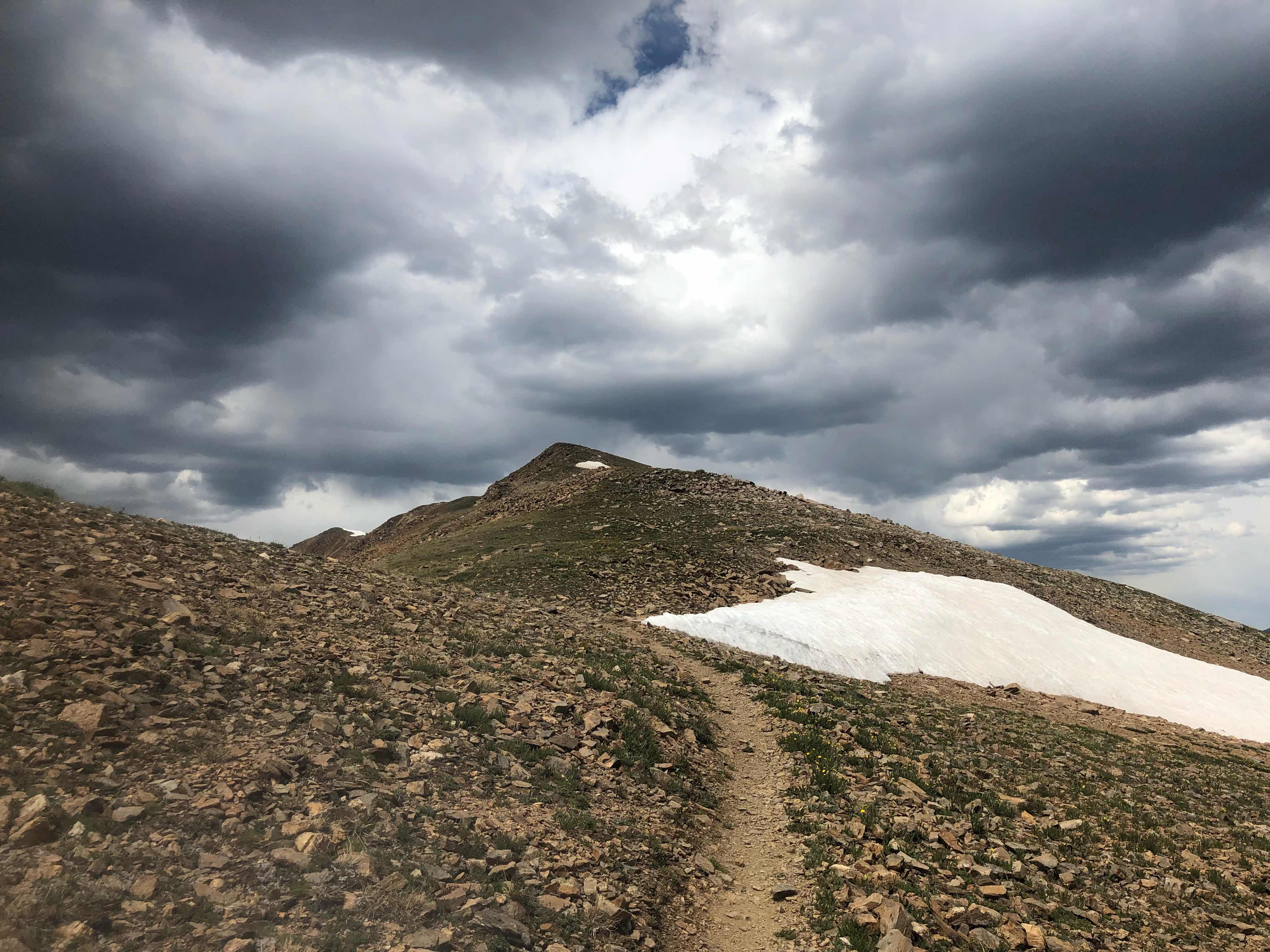 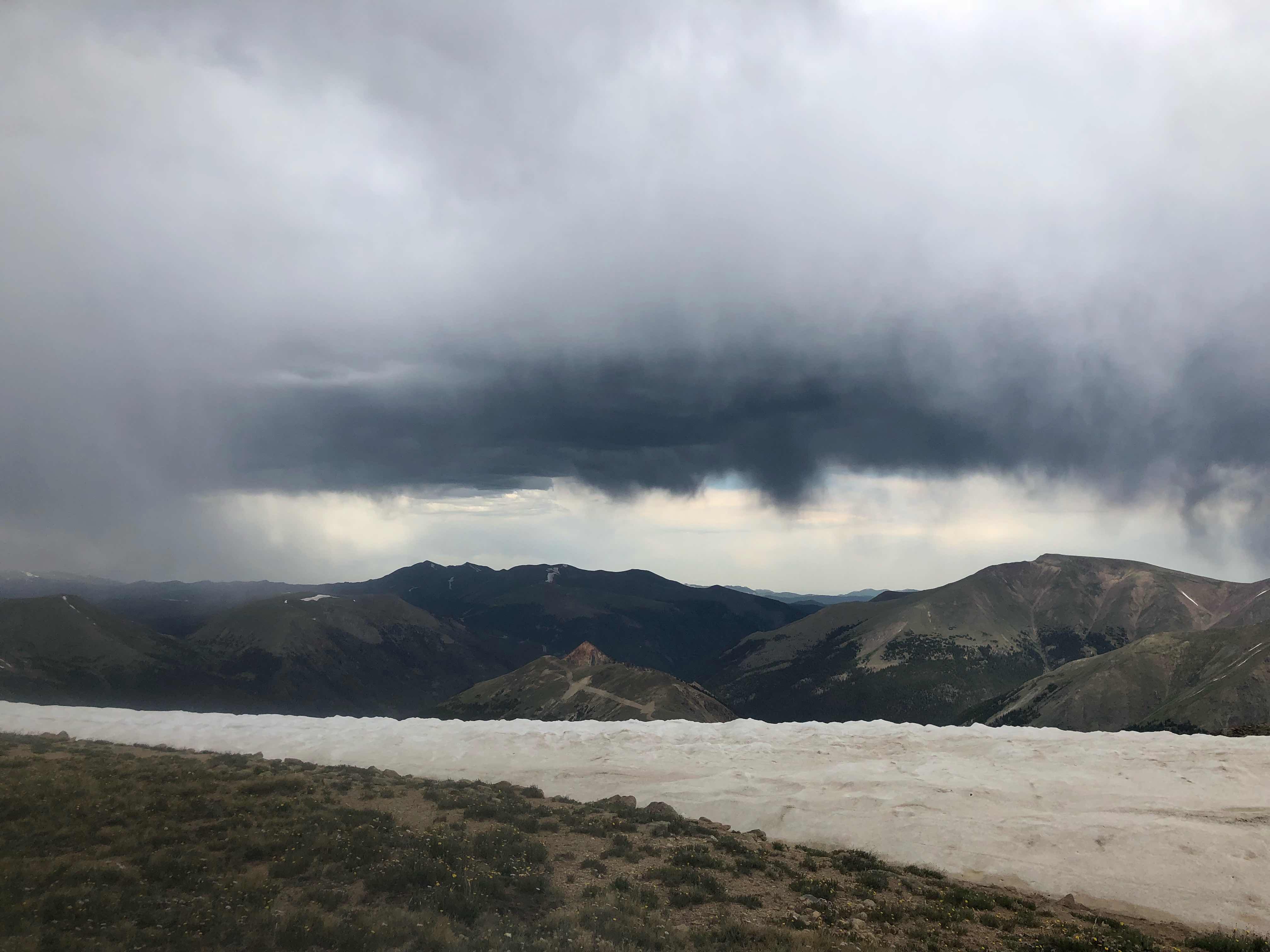 At this point I stopped to put on my rain jacket 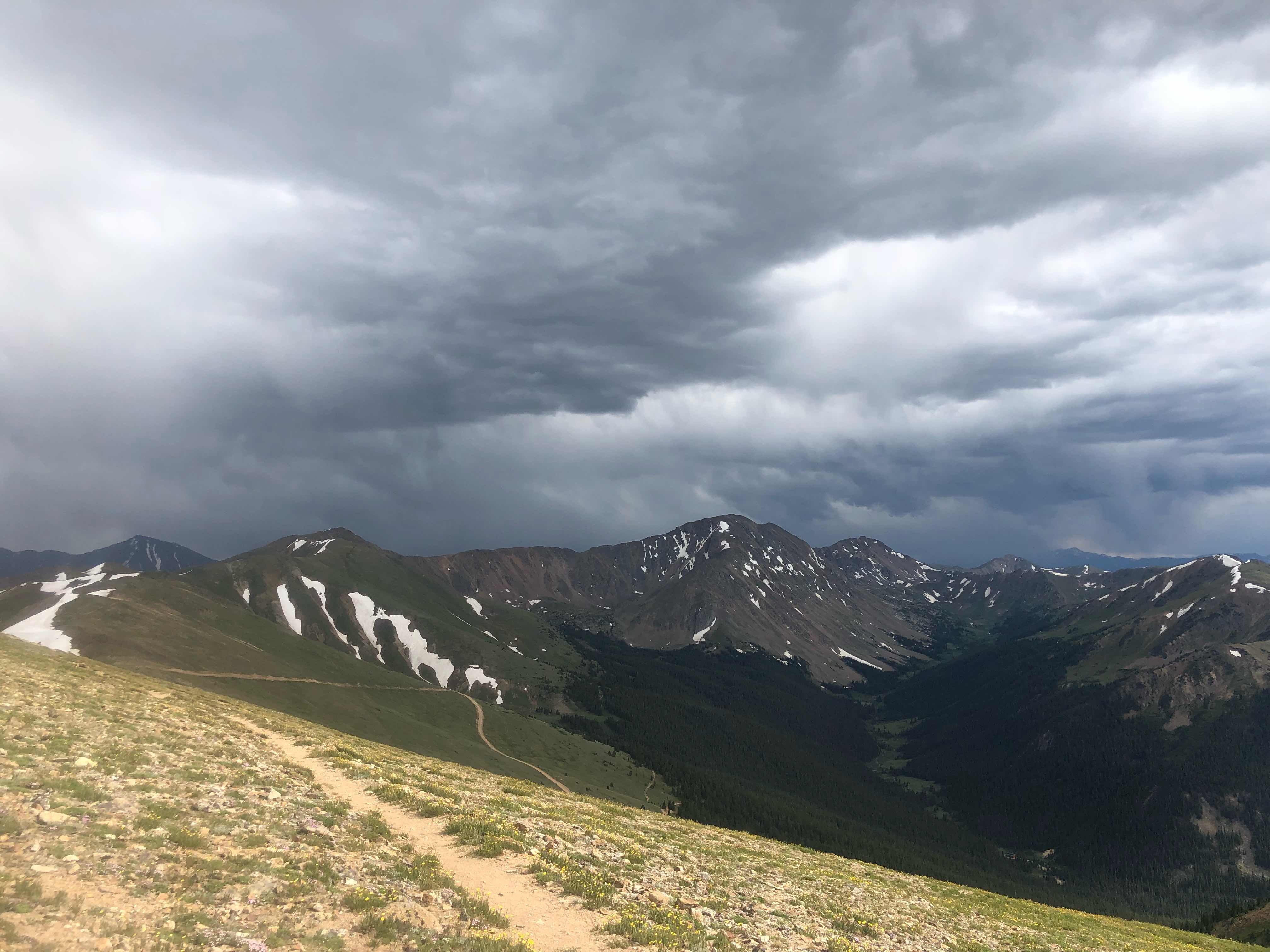 Getting more ominous by the second
I’m not exactly sure how it worked out, but I avoided the rain and lightening. It was crazy because I was completely surrounded by foul looking weather. I was hiking my heart out to get to a forest service road that would take me to a lower elevation and also reconnect with the trail farther on. I finally made it to the road, but I couldn’t get to it. There was a very sketchy, giant snowfield blocking my access. I was stuck between and rock and a hard place. I couldn’t decide if I should continue hiking along the divide in possible bad weather or to try a sketchy traverse across an icy snowfield. Well, I eventually decided that the sketchy traverse had a higher chance of failure. The weather had held out this long, I just needed to make it another 3-5 miles and I would be in safer terrain.
I put on some Harry Potter and hurried along. Just as the trail began to drop down in elevation the rain also began to fall. I wasn’t too happy about the prospect of getting soaking wet at the end of the day. Once again my luck held out and the rain was short lived. I decided to end my day a little earlier than planned. I found a nice sheltered spot and set up my tent. It has been a long time since I have used my tent. I carry it on the outside of my pack and was relieved to see that it was not damaged in my fall from two days ago. I hadn’t considered that possibility until I started to set it up. I got completely set up and had just finished cooking dinner from inside my tent when it finally began to rain in earnest. I was pleased to see that I had made the right decision to stop early.
I know more than a few of my readers are wondering what happened to Turtle. I know it has been a few days since I mentioned him. I’m sorry to say that he has decided to quit the trail. I lost him coming out of Breckenridge and he never made it to where I was camped that night. I wasn’t overly concerned because that has happened before. When I still didn’t see him on the second day out of Breckenridge I decided to send him a text. I got signal late in the afternoon and texted him where I planned on camping that night. I was surprised when I got a text back almost immediately. Turtle has Sprint and never has cell service on trail. It was not a happy text. He had turned around early that morning and hiked back to Breckenridge. He told me that he wasn’t enjoying the trail as much as he felt he should. I tried to convince him to take a few days before making any decisions. That is why I haven’t said anything before now. We talked this morning before I left town and he has made up his mind. Turtle, I wish you luck in all of your future endeavors. I’ll miss hiking with you and your constant upbeat attitude. I guess I’m back to being a lone wolf on this trail.
"At times our own light goes out and is rekindled by a spark from another person. Each of us has cause to think with deep gratitude of those who have lighted the flame within us."
- Albert Schweitzer