I really could have slept in this morning. I heard my parents get up, but I just rolled over and tried to go back to sleep. After a few minutes I knew that I had to get up. Hannibal wanted to be on the road by seven. We had to drive thirty miles to get me back to the trail and then they had a long drive ahead of them to get to Jackson Hole, WY. I finished packing up while they got cleaned up. The hotel offered a continental breakfast so we decided to check that out. Since I am carrying a ton of food for seven days I decided to just have a bowl of cereal and some coffee. The hot breakfast options did not look very appealing to me and my parents did not seem very pleased with the pancakes, eggs, and bacon that they were eating. We got on the road a little later than planned. On the way to the trail we drove past some cowboys and cowgirls herding cattle on the side of the road. We had to slow down and stop a few times as the cows crossed the road. Hannibal and The General dropped me off on the side of the highway a little after eight o’clock. It was the same exact spot that Turtle and I hitched from last month. I have officially connected my footsteps and the flip flop is done now. I said goodbye to my parents knowing that I will see them once I finish this stretch. They will pick me up from another highway in seven days. I’ll take another zero day with them for my birthday in Dubois, WY. 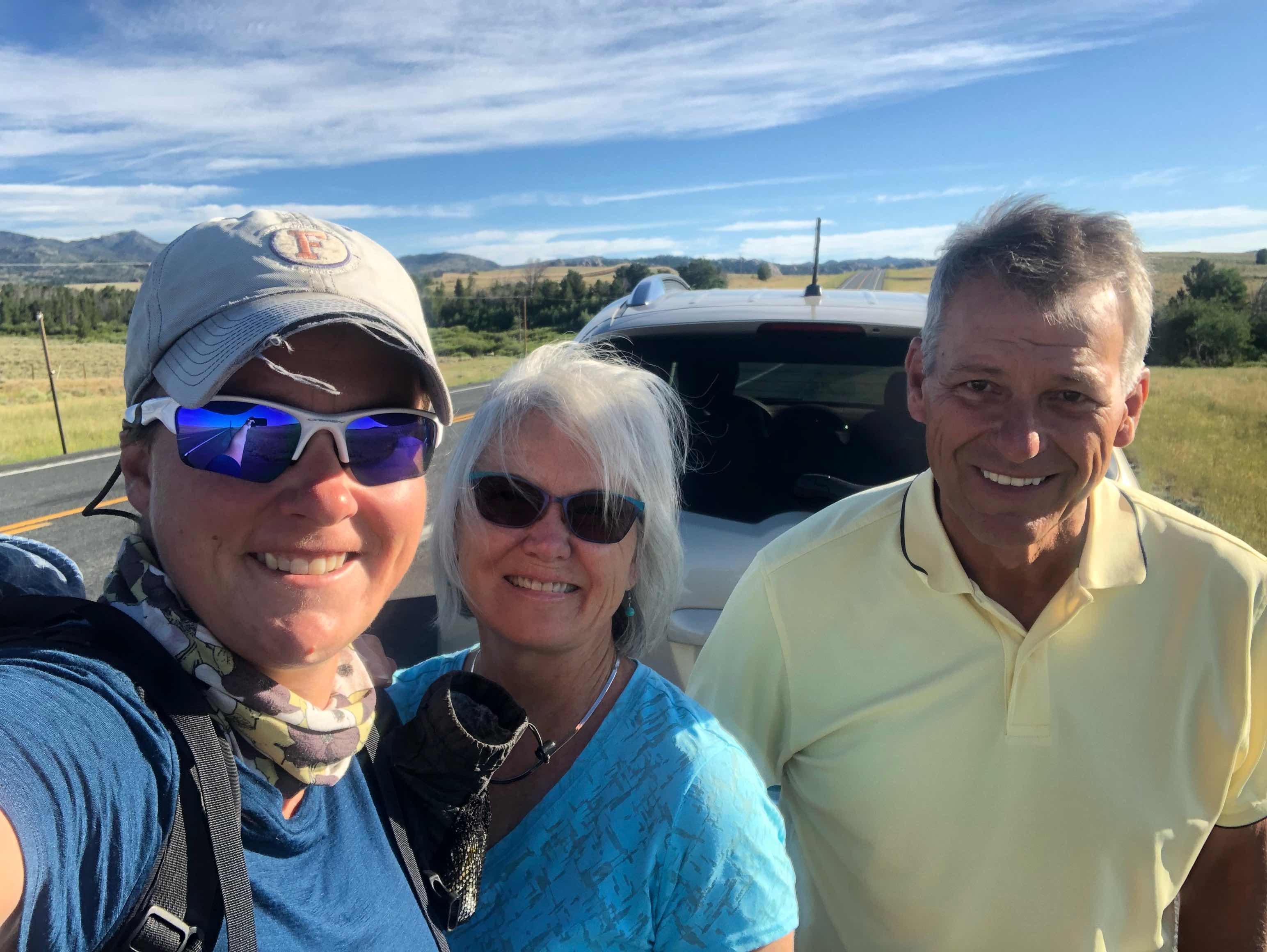 Saying goodbye
The beginning of my hike was through the same type of terrain as the Great Basin, lots of parallel trail and dirt roads surrounded by sagebrush and antelope. I was glad that it was still relatively cool out because seven days of food is HEAVY. The first part of the day passed by pretty quickly. Walking on dirt roads is easy. I only had to pay attention to road junctions where I had to make a turn. 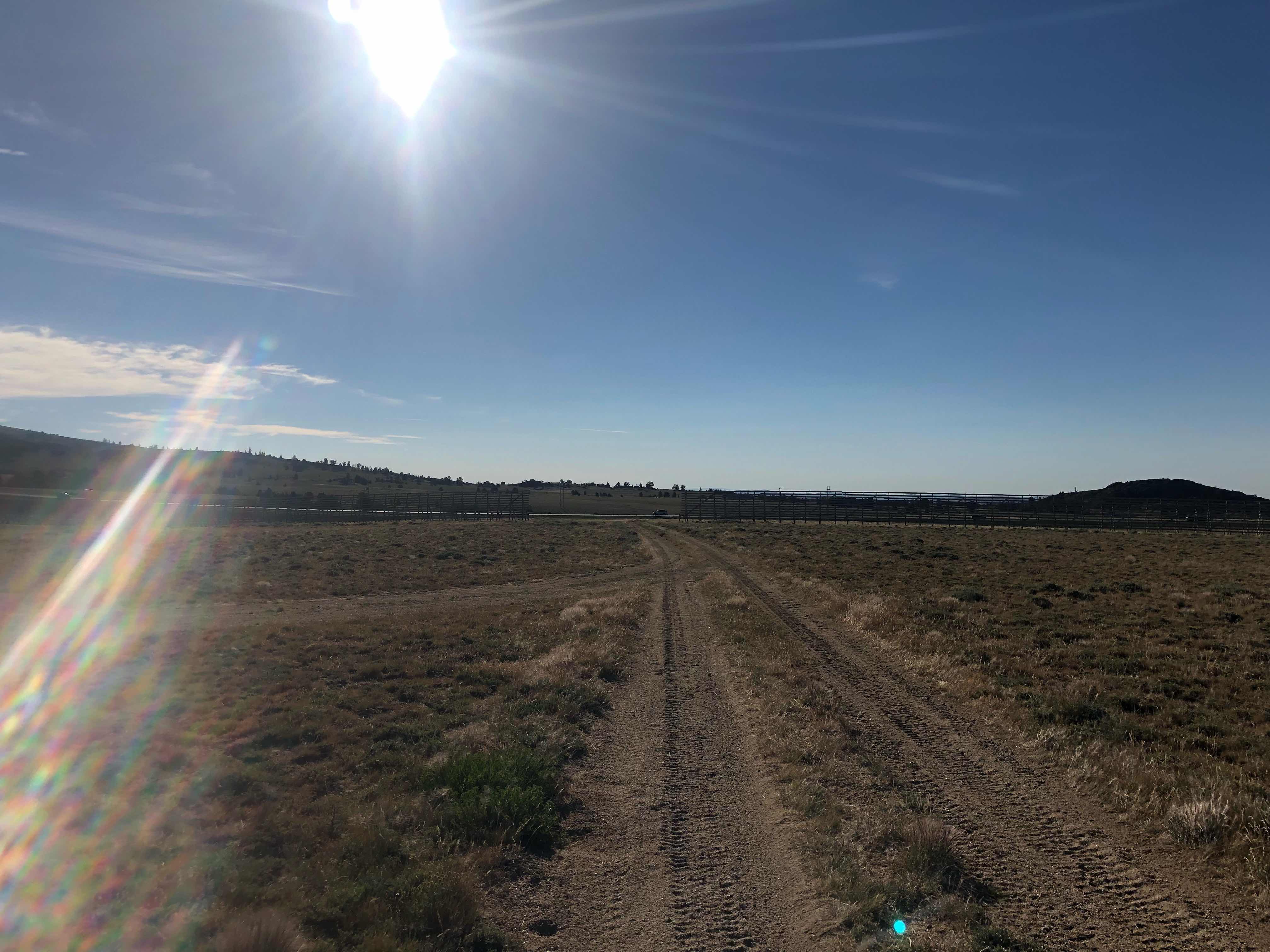 Easy walking
It was the second part of the day that became difficult. As I transitioned into the Wind River Range the trail became difficult to follow and there were a lot of downed trees. It made for really slow hiking. Anytime I had to go around or over a tree I was burning more energy. The trail would go from the forest into the open. Almost every time this happened the trail disappeared. I feel like I spent all afternoon checking my phone to see if I was still on course. When in the woods I was swarmed by mosquitos. They were good motivation to keep hiking. 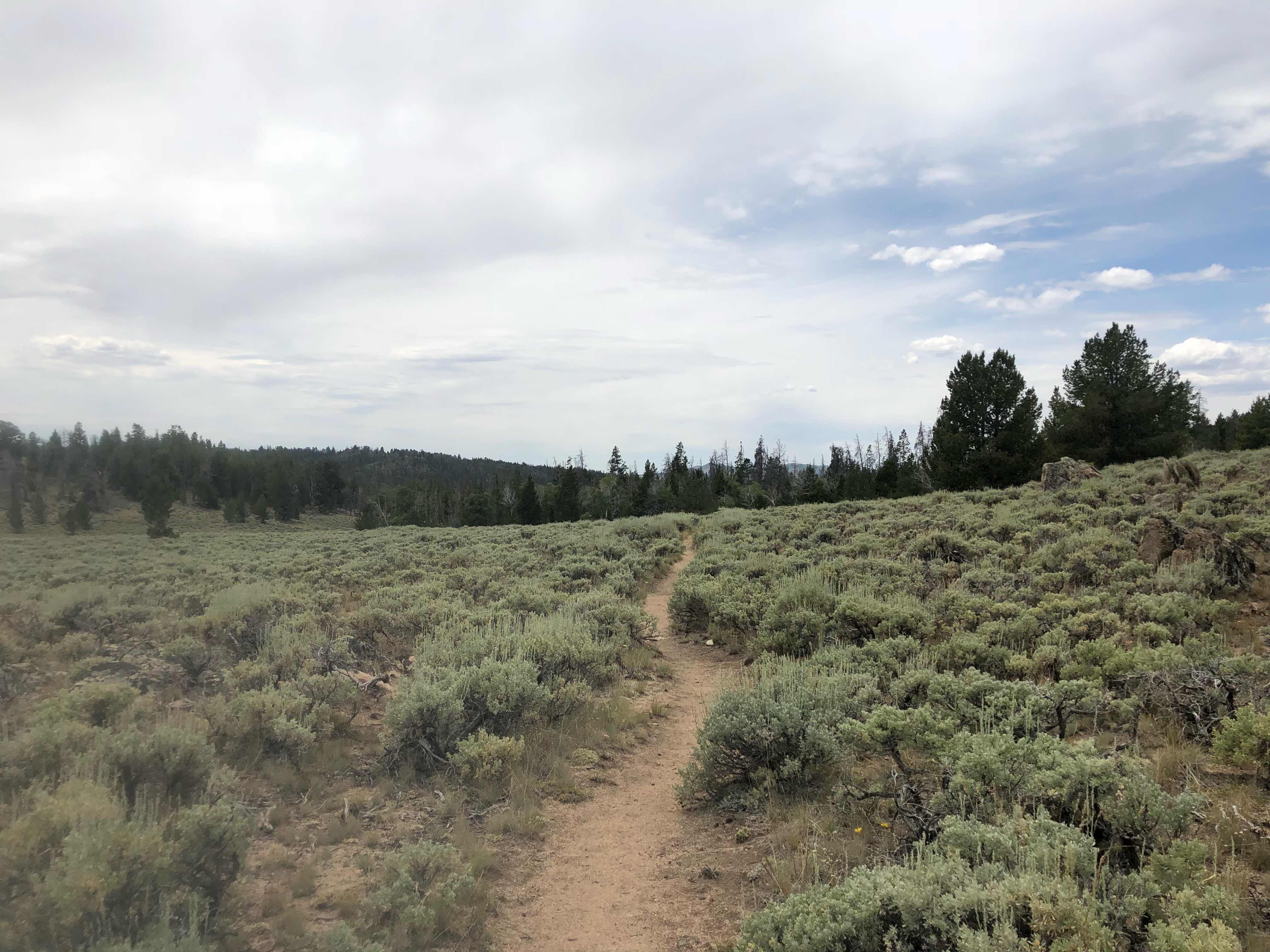 Out in the open with easy trail to follow 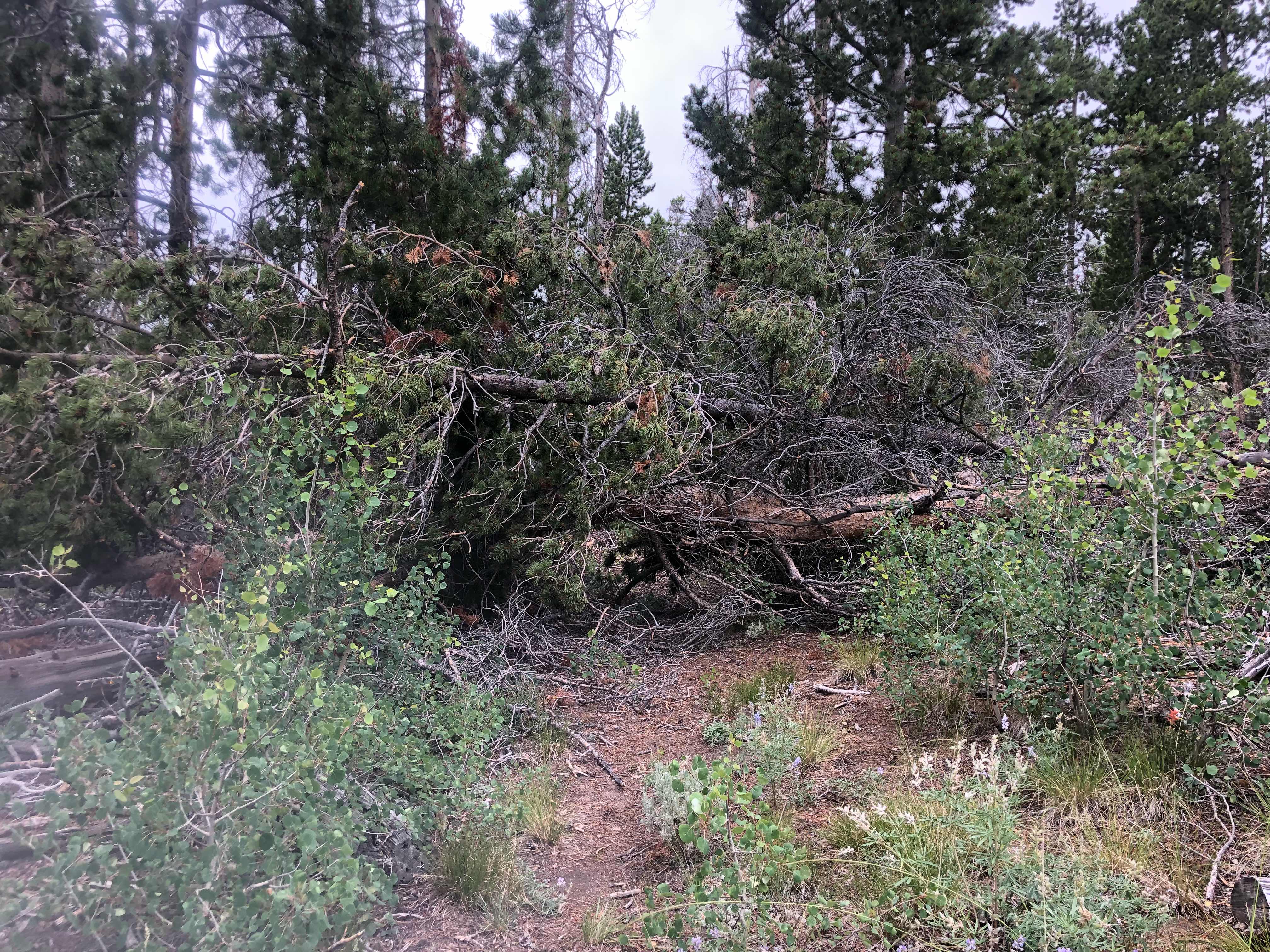 Example of the blow downs I had to deal with
The good news of the day was that there was a ton of water. Since my pack was so heavy with seven days of food, I just carried half a liter of water at a time. This meant I had to stop more often to process water, but I figured it was better to stop more frequently to grab water than to add even more weight to my back. Around five o’clock the afternoon storm started. I had to stop and dig out my rain jacket. I had just started hiking again when I realized that the pack I’m now carrying isn’t one hundred percent water proof. I had my puffy in my pack, but not inside my pack liner. I had to stop again to remedy that situation. It is never a good idea to let your insulating layer get wet. As soon as I started going again it stoped raining. It wasn’t very long before I had to stop again to take off my rain jacket. 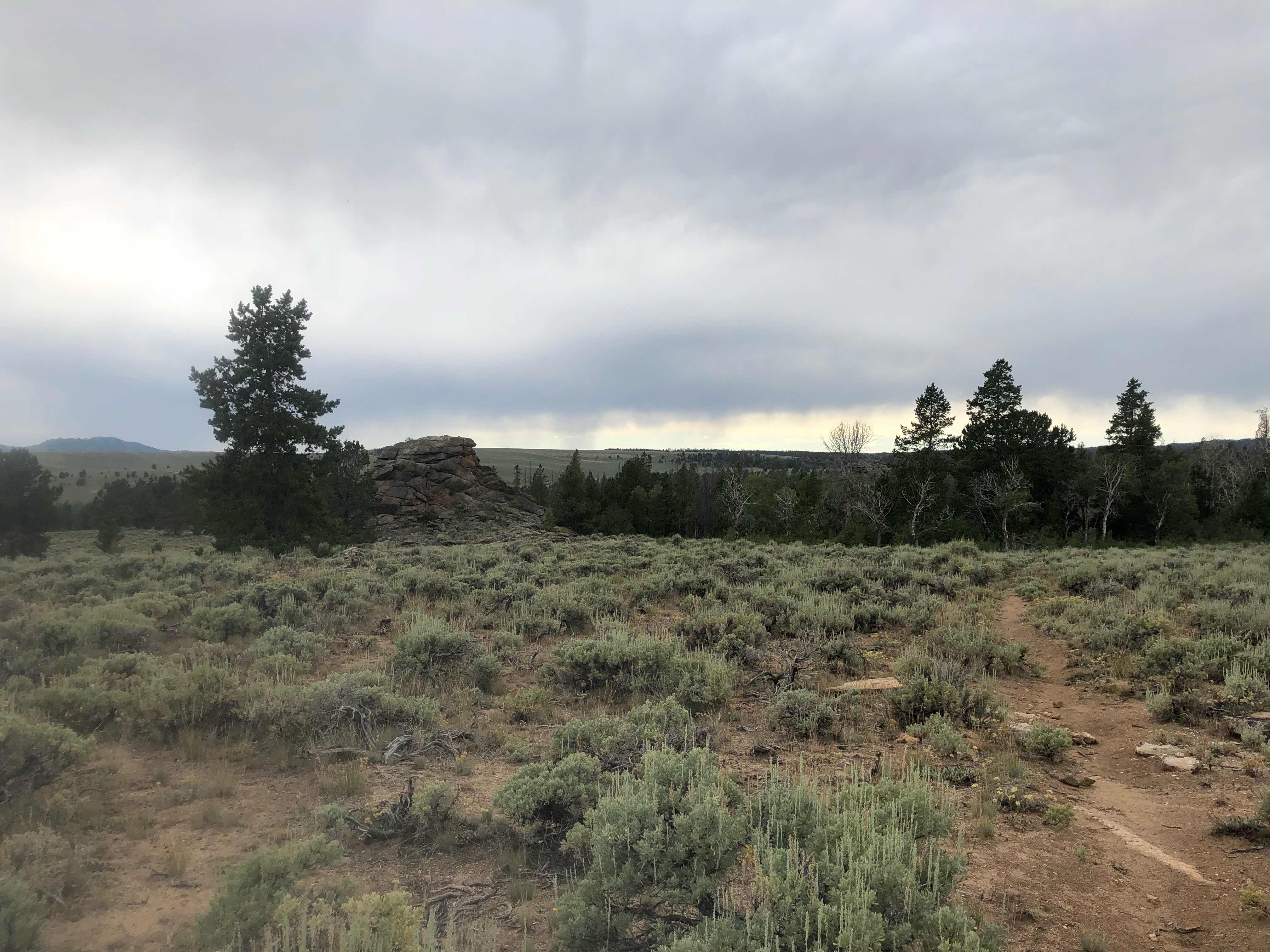 Storm moving in
I really wanted to make it twenty seven miles today, but with the later start I fell short. This stretch is 171 miles long and I was hoping to knock it down to a more manageable number on day one. I expect tomorrow to be difficult. It would have been helpful to get in a few more miles today to make up for the lower miles I think I’ll get in tomorrow. Oh well, I’ll have a lot more days to make up miles on this leg. 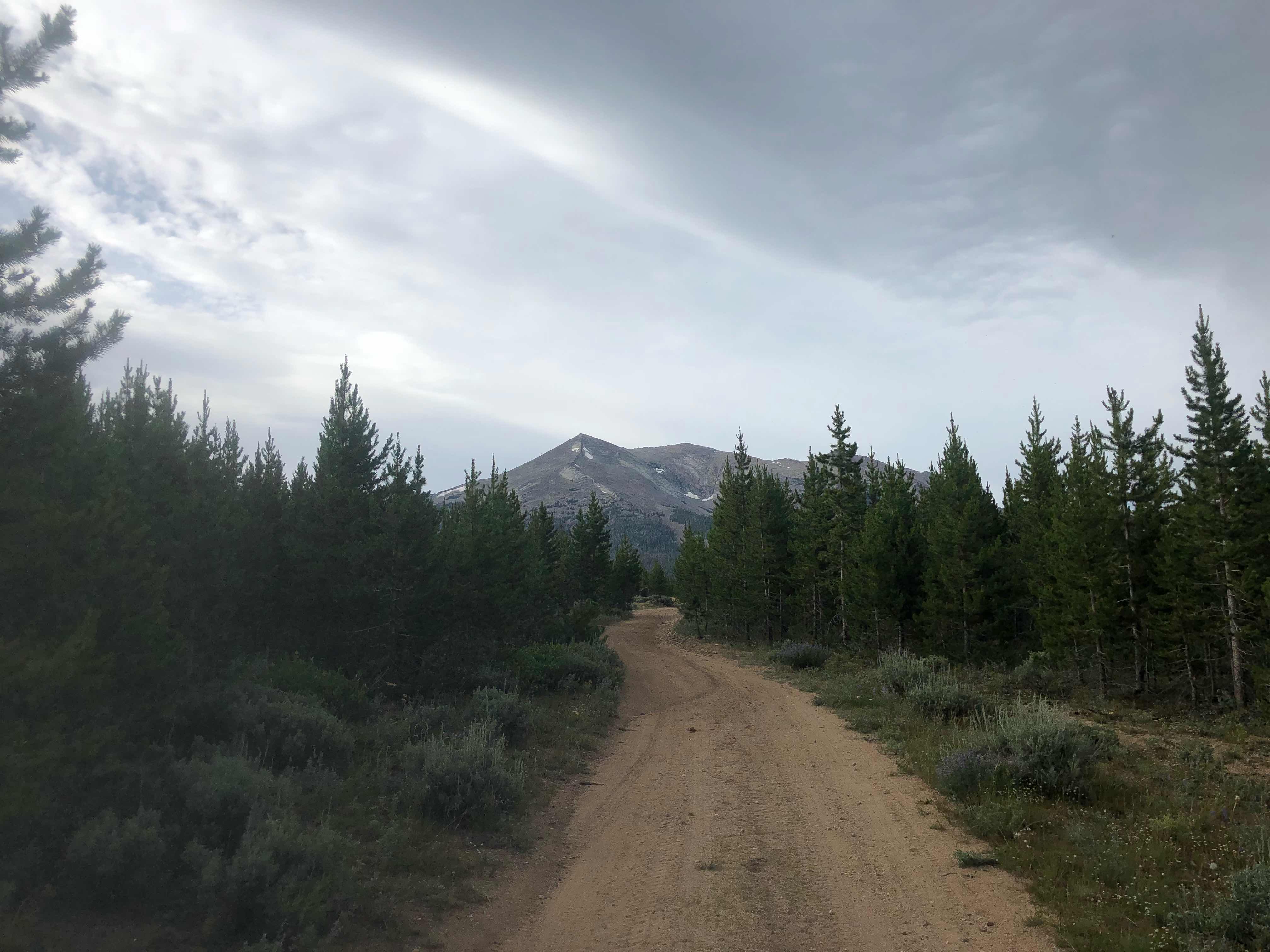 Approaching the Wind River Range
I didn’t see another thruhiker all day. In fact I didn’t see anyone else on the trail today. Since I flipped up to a new hiker bubble I’m interested to see who is hiking around me. I have no idea if I will see anyone I hiked with from before the flip, or if I will be in a completely new bubble. It would be nice to see some of the people I started Colorado with. Since I will be deep in grizzly bear territory soon, I wouldn’t mind having someone to hike with. Safety in numbers, you know? 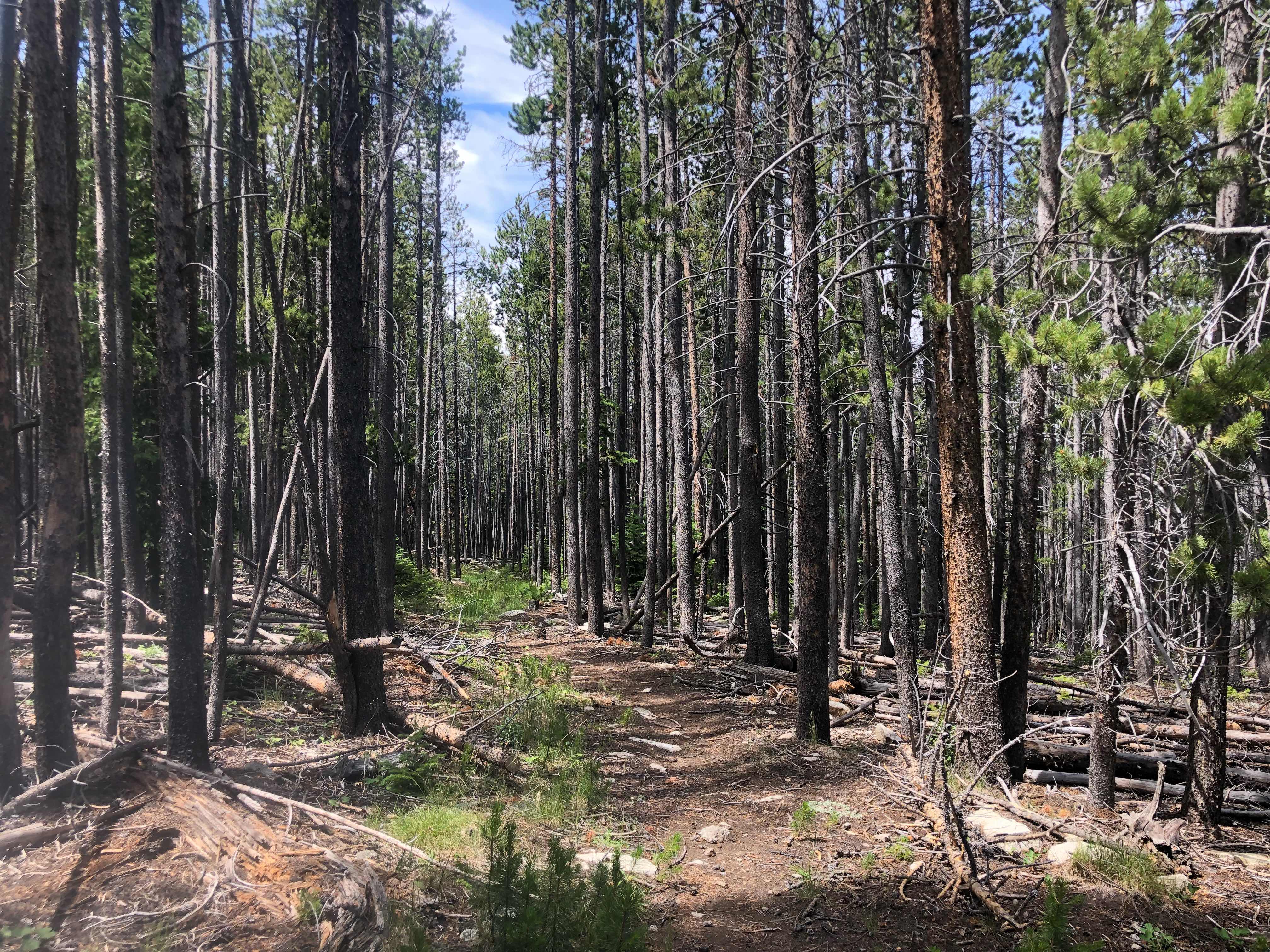 Clear trail in the forest was a rarity
Around seven o’clock I filled up both of my water bottles and began to look for a place to setup camp. I hadn’t been seeing very many ideal camp spots lately and I wanted to be prepared for when I did. About a mile and a half after I grabbed water I found a spot. It was flat, had a nice sitting log, wasn’t too grassy, and not too close to water. Spots like that have been hard to come by recently. Since it looked like it might rain again I went ahead and setup my tent. The mosquitos were so bad that I really wanted to cook and eat from inside my tent, but I couldn’t. I just washed my sleeping bag and with grizzly country approaching I don’t want it smelling like food. 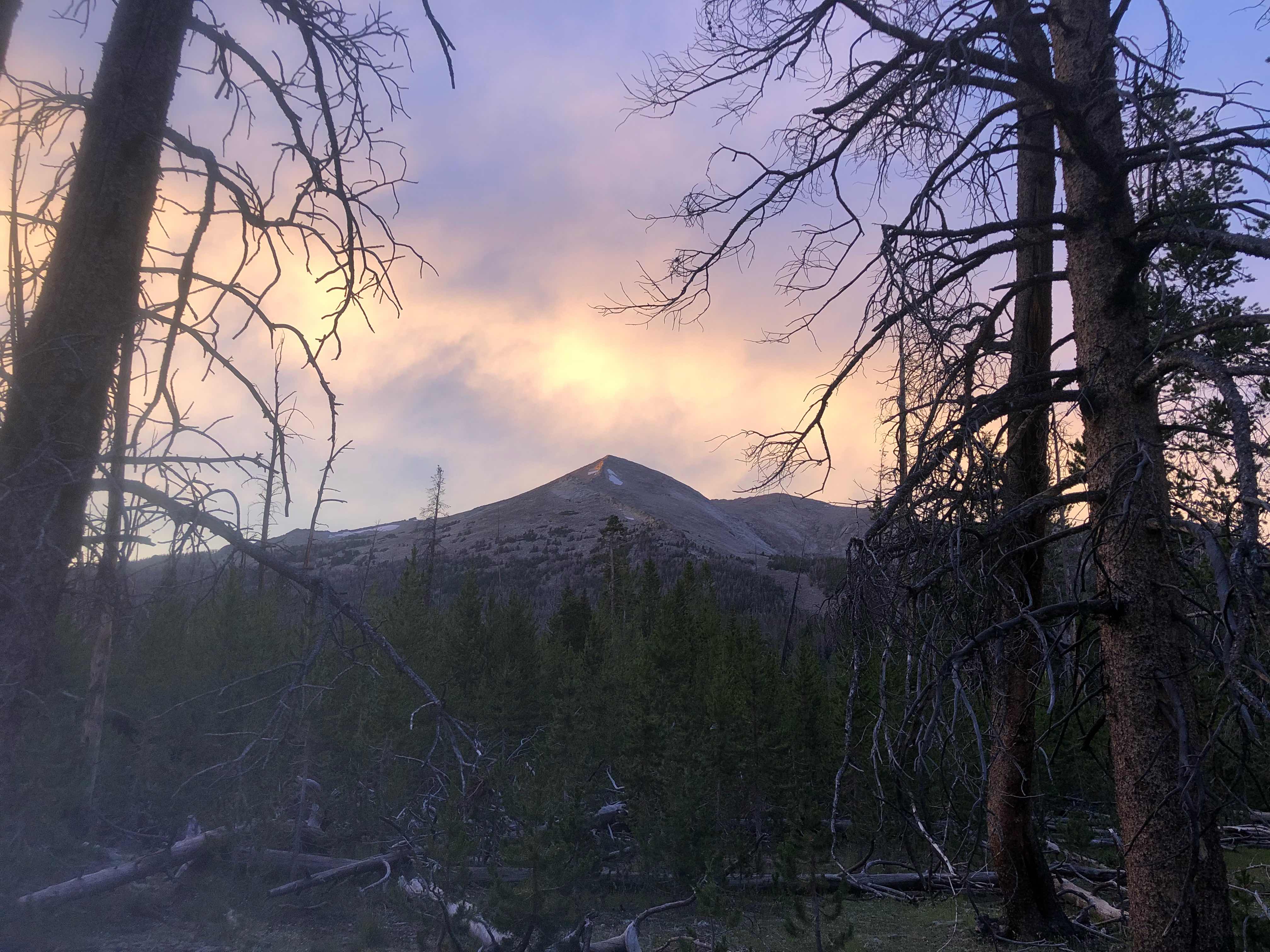 Sunset from my camp
"Gratitude is a quality similar to electricity: it must be produced and discharged and used up in order to exist at all."
- William Faulkner