I slept great last night. Not only did I stay dry, but I was very warm. Randy cooked me egg burritos and served me coffee before putting me back on trail. My knee felt pretty good and I was ready to make some miles. Today I hiked last a ton of lakes and meadows and the trail was pretty easy going. I was sad to say goodbye to Randy and Chloe, but I might see them farther up the trail. What struck me the most about today’s hike was how different the terrain was from what I have been hiking. I’m sure that if I hadn’t skipped 90 miles the change would have been more gradual. I spent most of the day slowly gaining elevation. It was a nice change from the steep up and downs that I have been hiking since leaving Breckenridge. Today was just normal hiking. There was nothing technical about it. 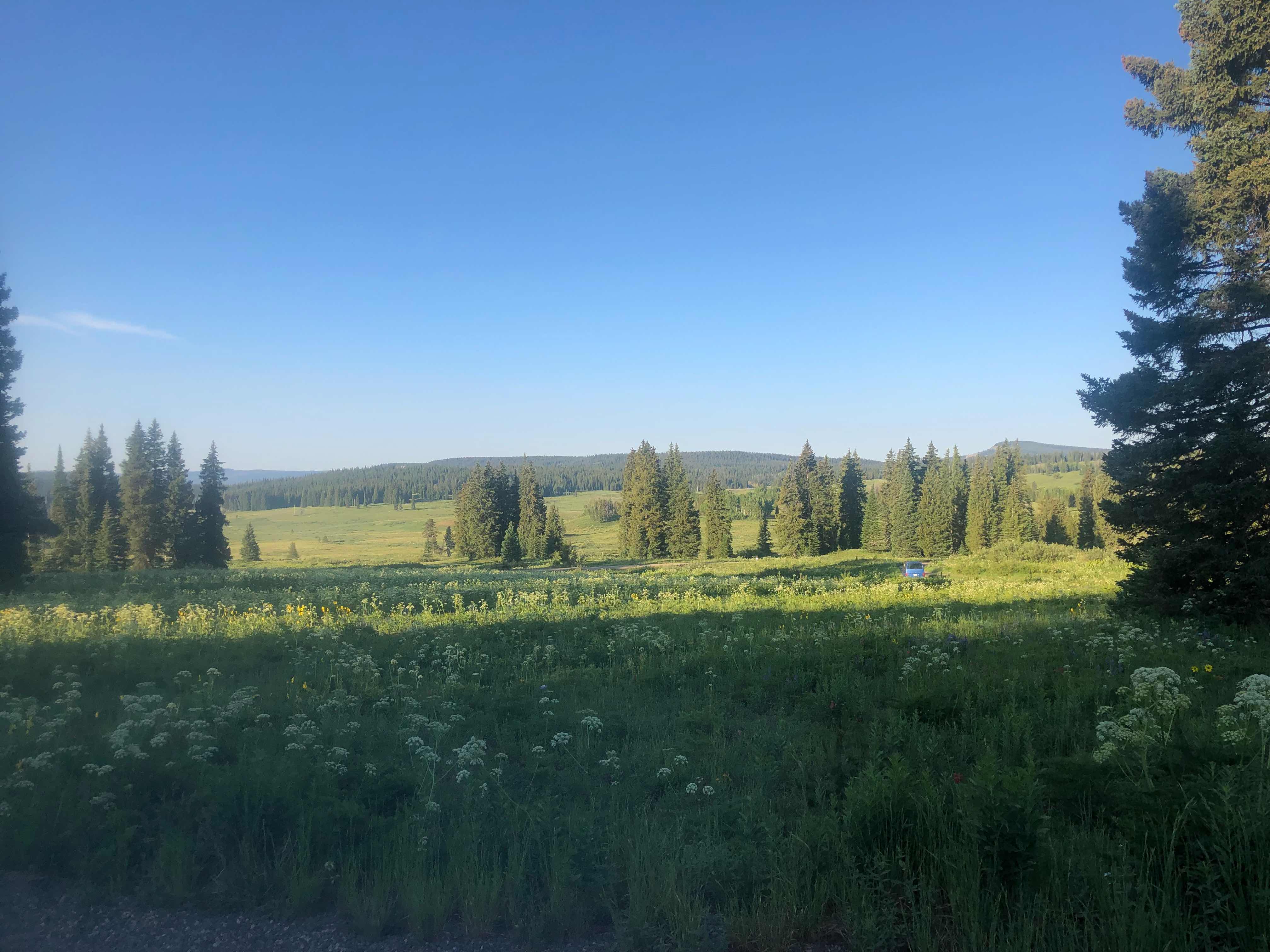 Lake Dumont Campground
I spent most of the morning hiking in the forest being chased by swarms of mosquitos. This area, known as Rabbit Ears, was very wet. I walked through lots of tall grass covered by condensation. It didn’t take very long for my shoes to become soaked. The mosquitos which were a mild irritant at first, soon turned into torture. After about five miles I had had enough. I finally broke down and put on some bug spray. I use 100% deet, because that is the only thing that stops these suckers from swarming me. I wasn’t very careful when spraying it on. I accidentally got some on my glued up wound. When I stopped for my next break I noticed that I was bleeding and the glue had become tacky again. That deet is some serious stuff. It was actually breaking down the medical glue holding my cut closed. I took a few minutes and tried to remove the deet with an alcohol wipe. It seemed to work and most of the glue holding my cut closed was saved. I have a few vials of more glue, but decided to leave things the way they were. If more dirt had gotten into the cut I didn’t want to seal it in with more glue. I will clean it up tonight in camp and if I need to I will regular it in town in a few days. 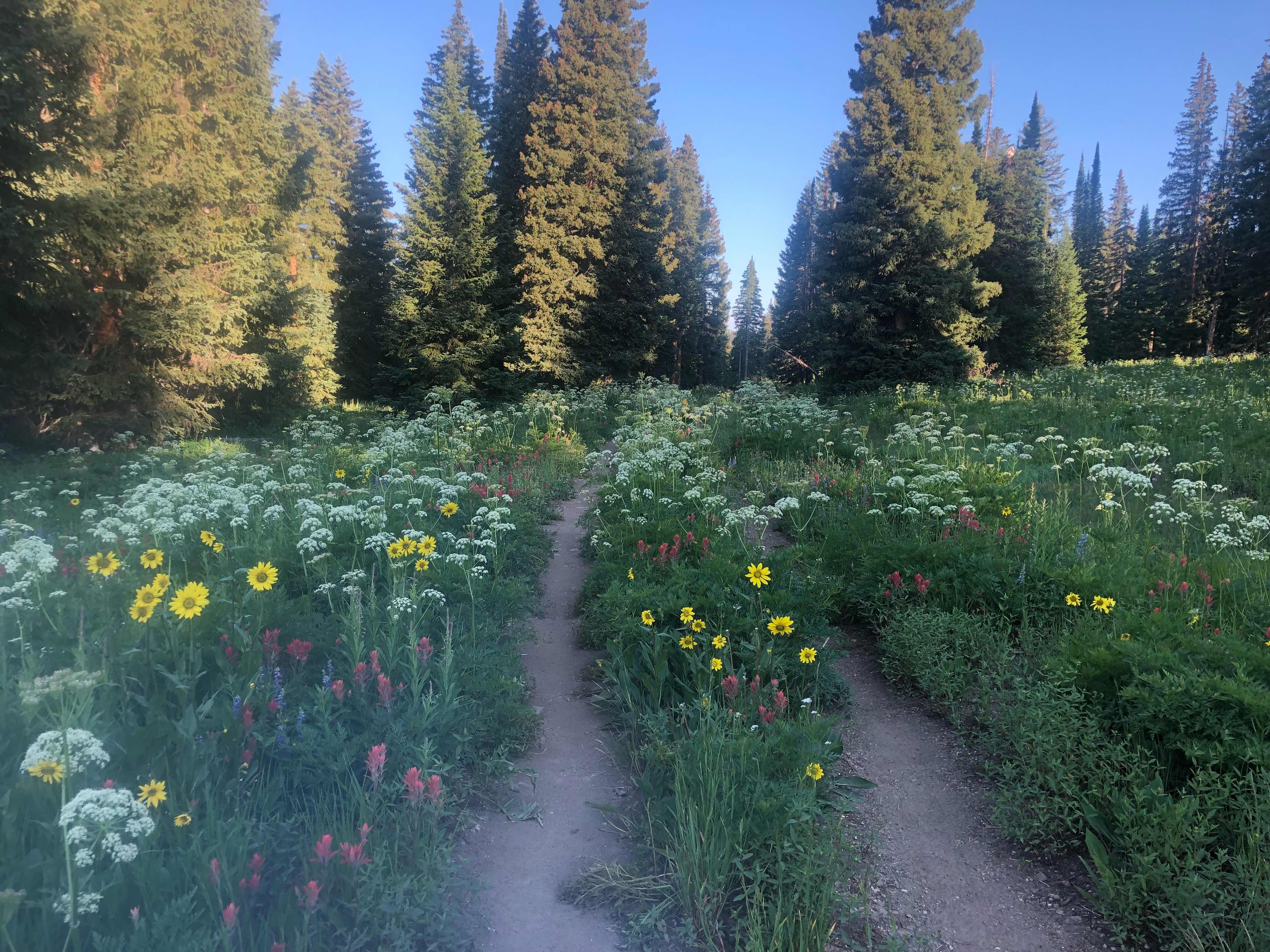 Wildflower dirt road/trail
I was feeling good early on, but after about ten miles I was losing steam. My knee had begun to throb and I was just tired. I put on my Harry Potter audiobook and pushed through. I increased my water consumption and started to feel better. I had been peeing like a race horse all morning. I think that was the excess fluid caused by the swelling of my kneecap coming out. I wasn’t replacing the fluids so I was getting dehydrated. Once I starters drinking more my energy came back. I knocked out thirteen miles by noon. It has been awhile since I have accomplished that. I enjoyed the easy hiking today. 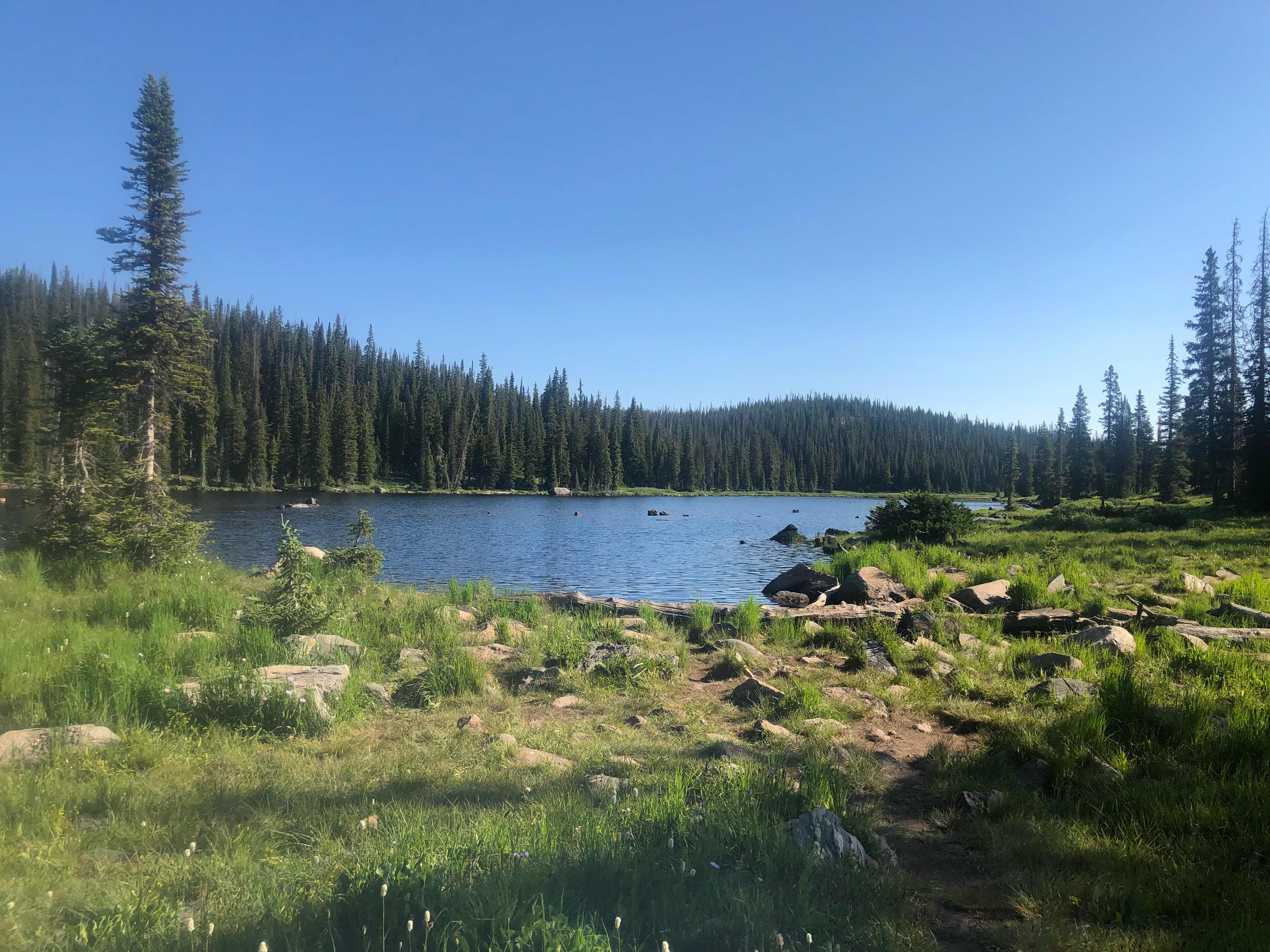 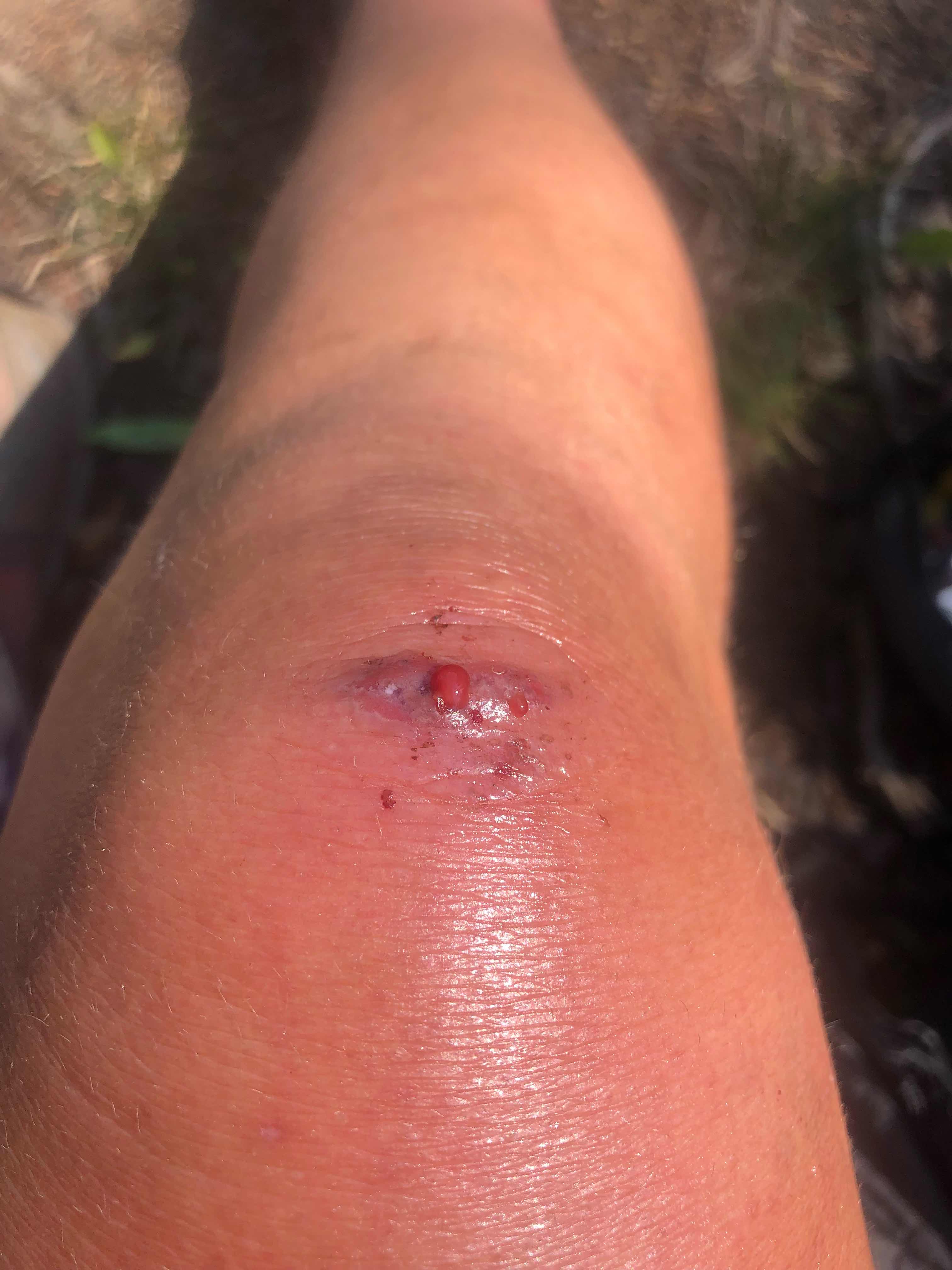 Deet ravaged wound
Around midday I took an extended break at a trailhead parking area. While I was eating a snickers bar a few hikers caught up to me. It was Hurculeas and Qetzel. I haven’t seen them since the morning BFG and SHR picked me up in Breckenridge. We spent a few minutes catching up. It will be interesting to see what other hikers are around me now that I jumped up. It will be even more interesting to see what new hikers I will see after I flip up past the section I’ve already hiked in Wyoming. I hiked on before Qetzel and Hurculeas, but I knew I would see them later in the day. I was starting to slow down again. I took some ibuprofen to help with the pain and swelling in my knee, but it didn’t help much. The pain was actually pretty minor, but the swelling had started to increase again. The vitamin I helped with that. Now that I’m hiking at a lower elevation it definitely feels like full blown summer. It had to be close to 90 degrees today. I really paid attention to my water sources. Since I’ve been in Colorado I have been pretty lax about carrying water. That has blown up in my face more than once and I didn’t want to make things worse for myself today. 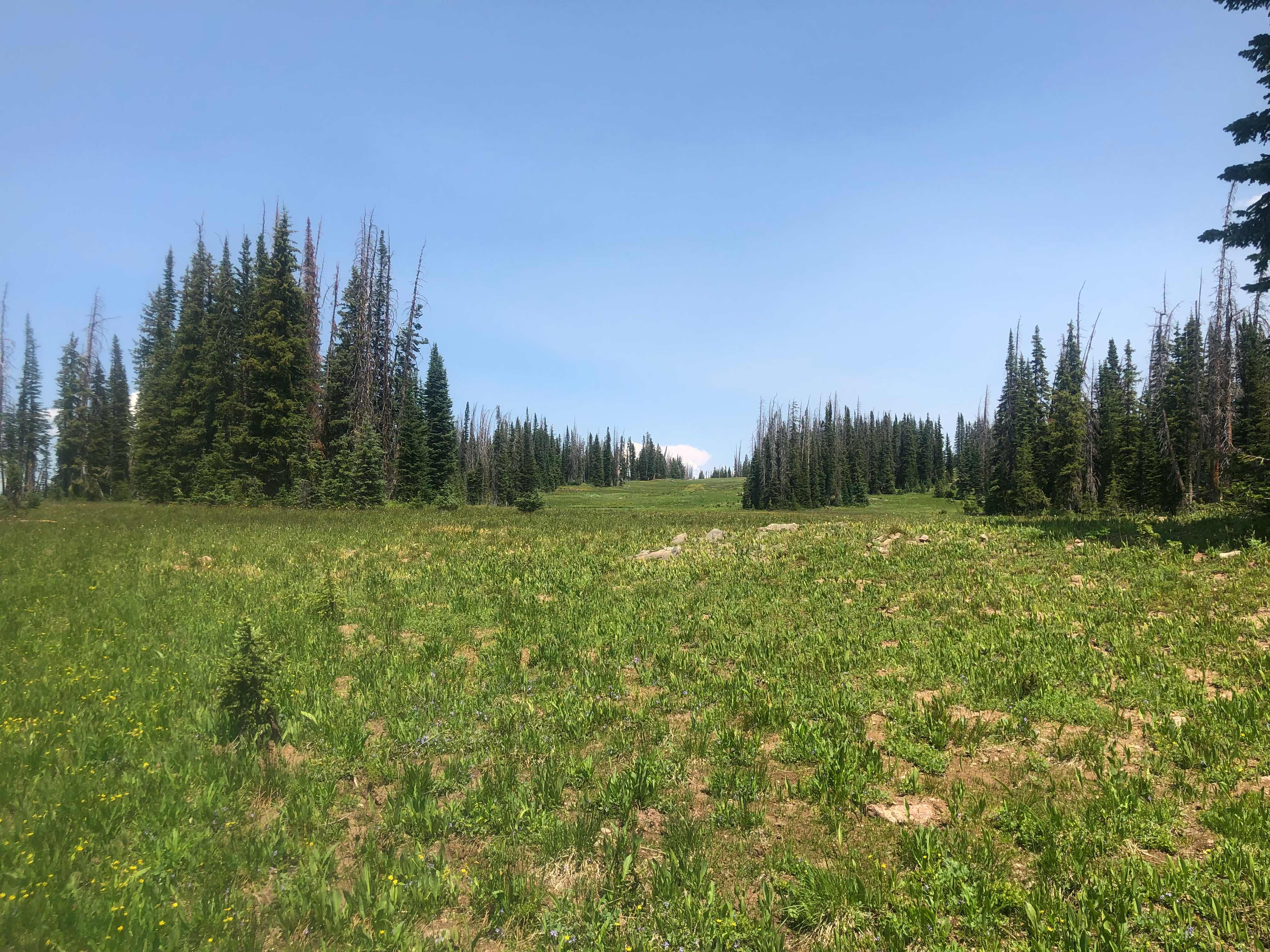 Wide open meadow
Towards the end of the day I started to gain elevation. The climbs were all pretty gental and I had some good views of new terrain. The surrounding mountains are all pretty craggy. This sectionreally reminds me of a section in Northern California called something Crags. I’m not even sure what a crag is, but that is the term that comes to mind when I saw the terrain today. 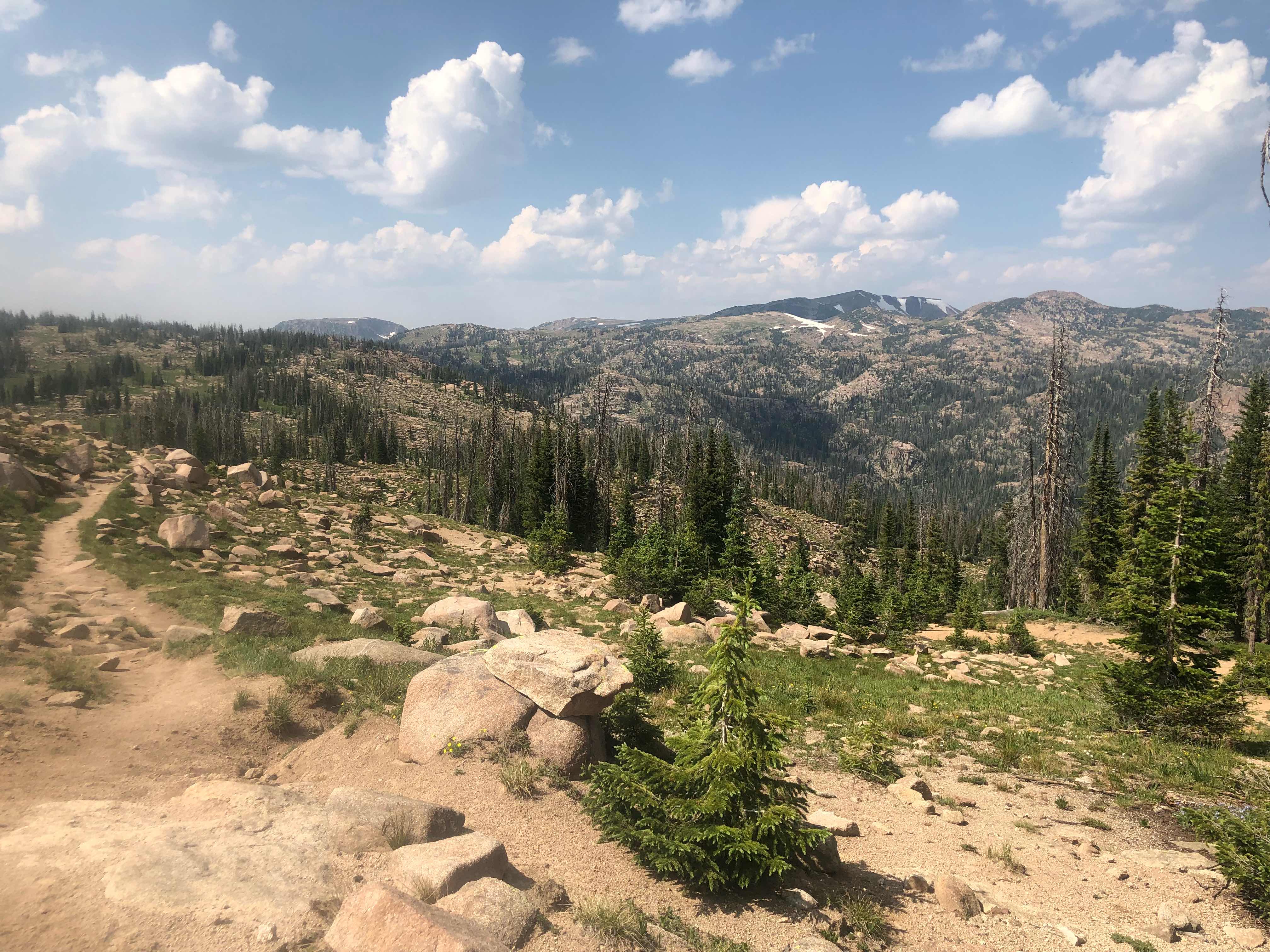 Craggy terrain
I could have hiked another five miles today, but I stopped early. I have a set time that I have to end this section to meet my parents. There was no sense getting ahead of schedule. In fact, I had cell service so I called my dad to verify. There is no way they can pick me up early. That means that for the next few days I can sleep in a little, stop early, and take lots of breaks. I only need to hike 27 miles tomorrow and the following day. That is kind of a shame. I was thinking that a forty mile day on this stretch was doable.
When I finally stopped for the day I couldn’t decide if I should cowboy camp or not. I had two very different weather reports. One stated that there was either a 0% or 10% chance of rain tonight. If that was the case I would cowboy. The other called for a 45% chance of thunderstorms. If that was the case I would setup my tent. The skies were clear so I decided to cowboy. As I was writing yesterday’s blog post the wind began to increase. When yesterday’s post was deleted, and I was already irritated, I began to see lightning in the distance. I decided to play it safe and setup my tent. It hasn’t started raining, but the wind is really howling. 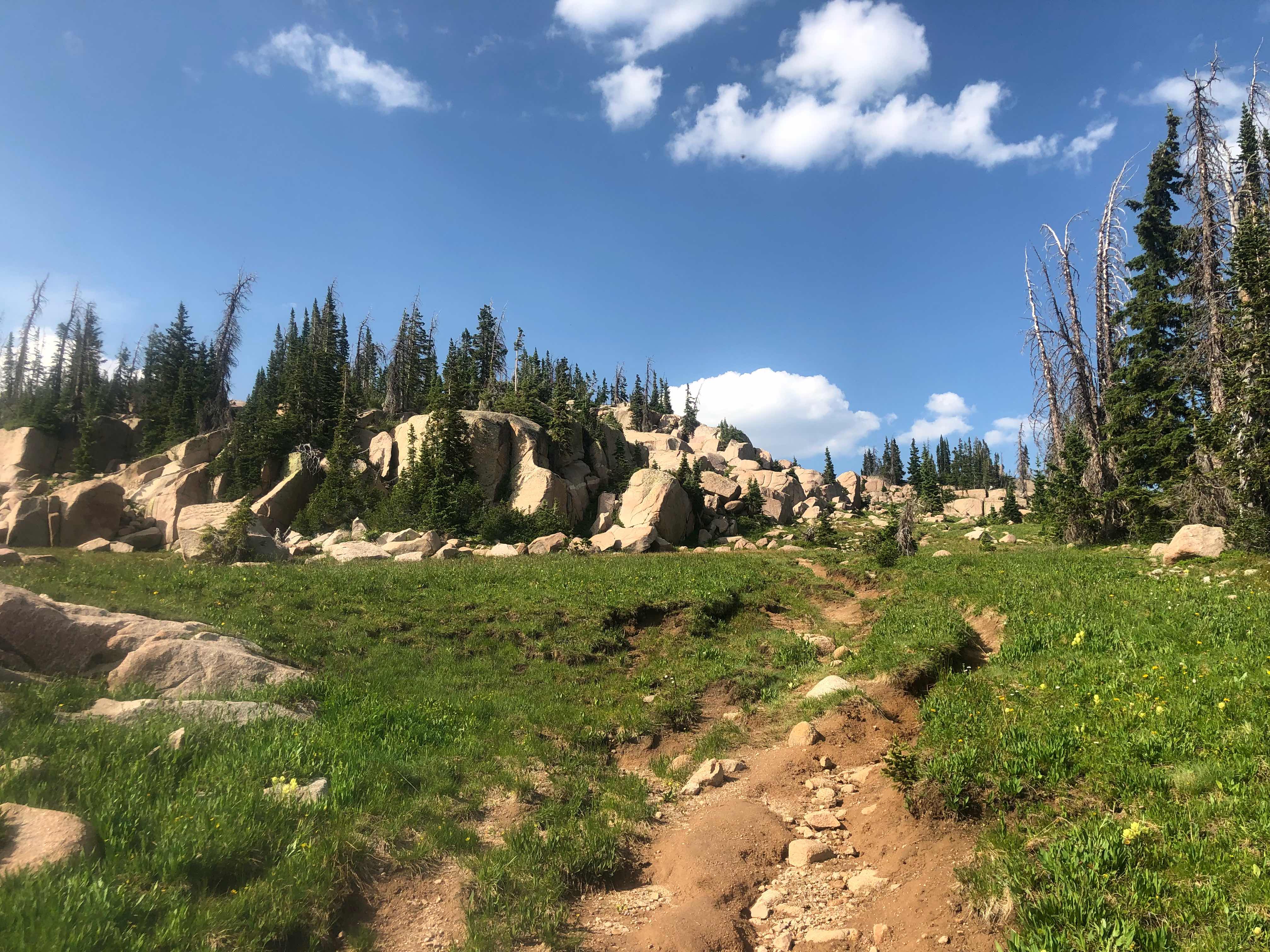 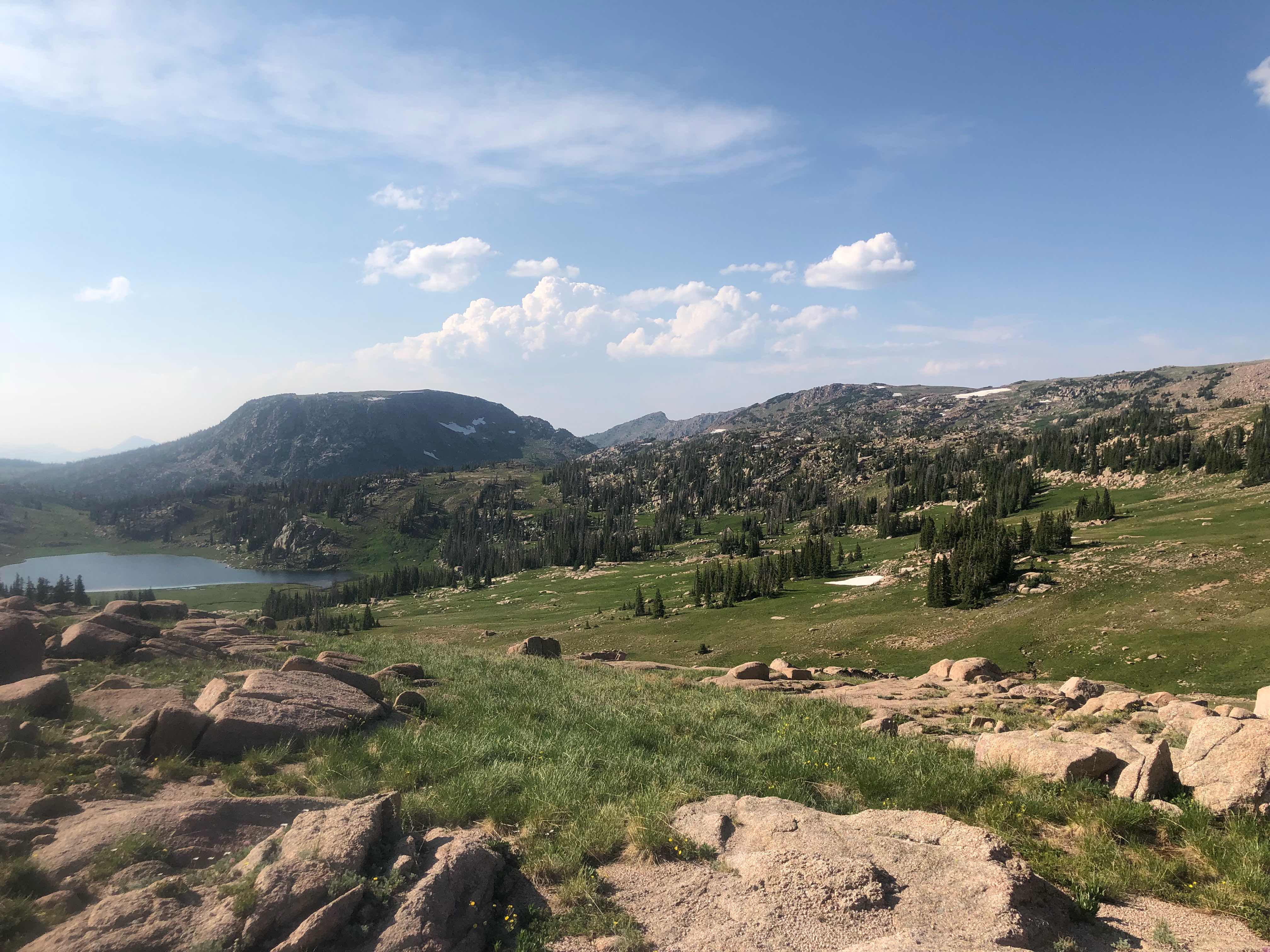 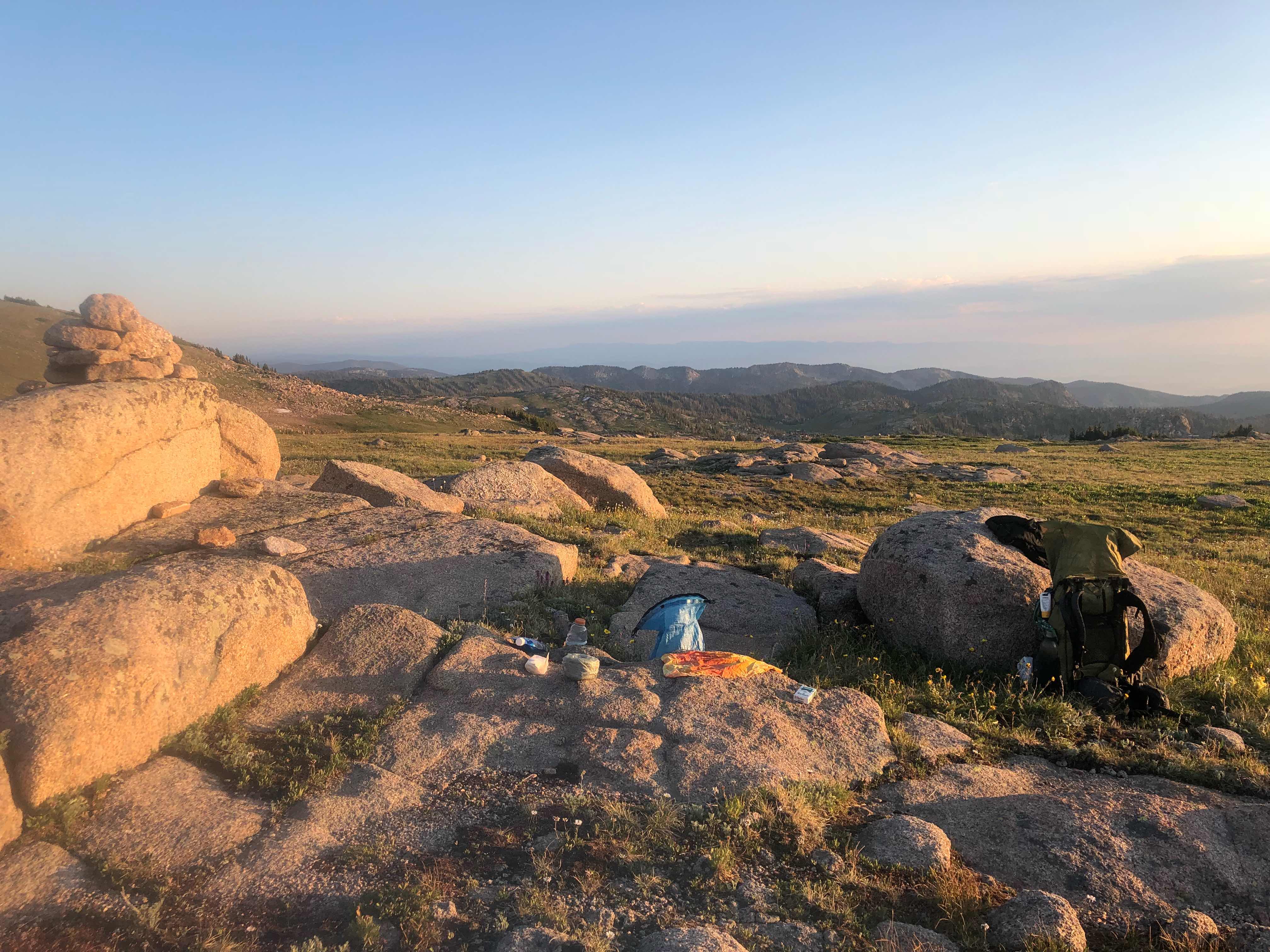 Awesome view from my dinner table 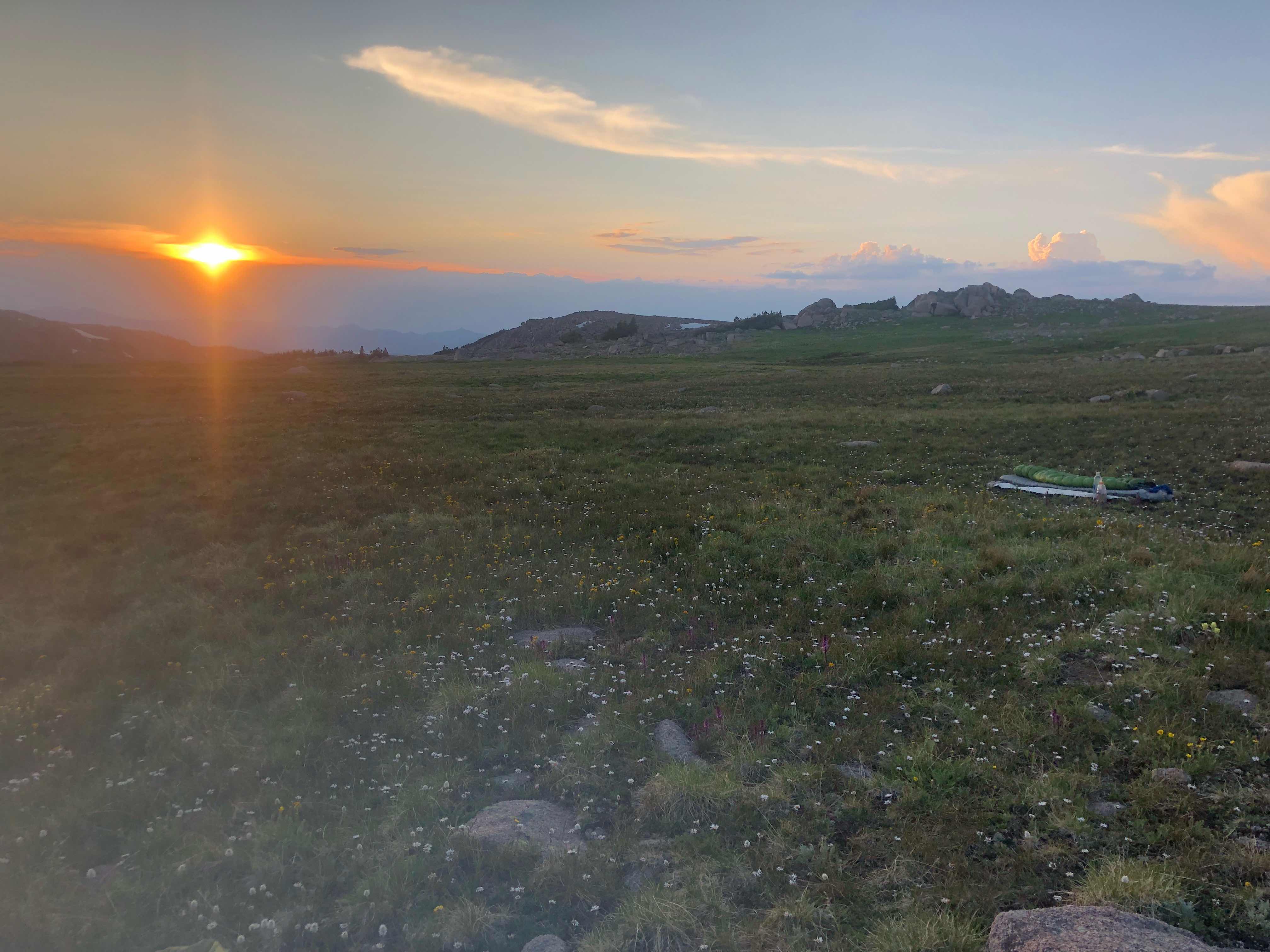 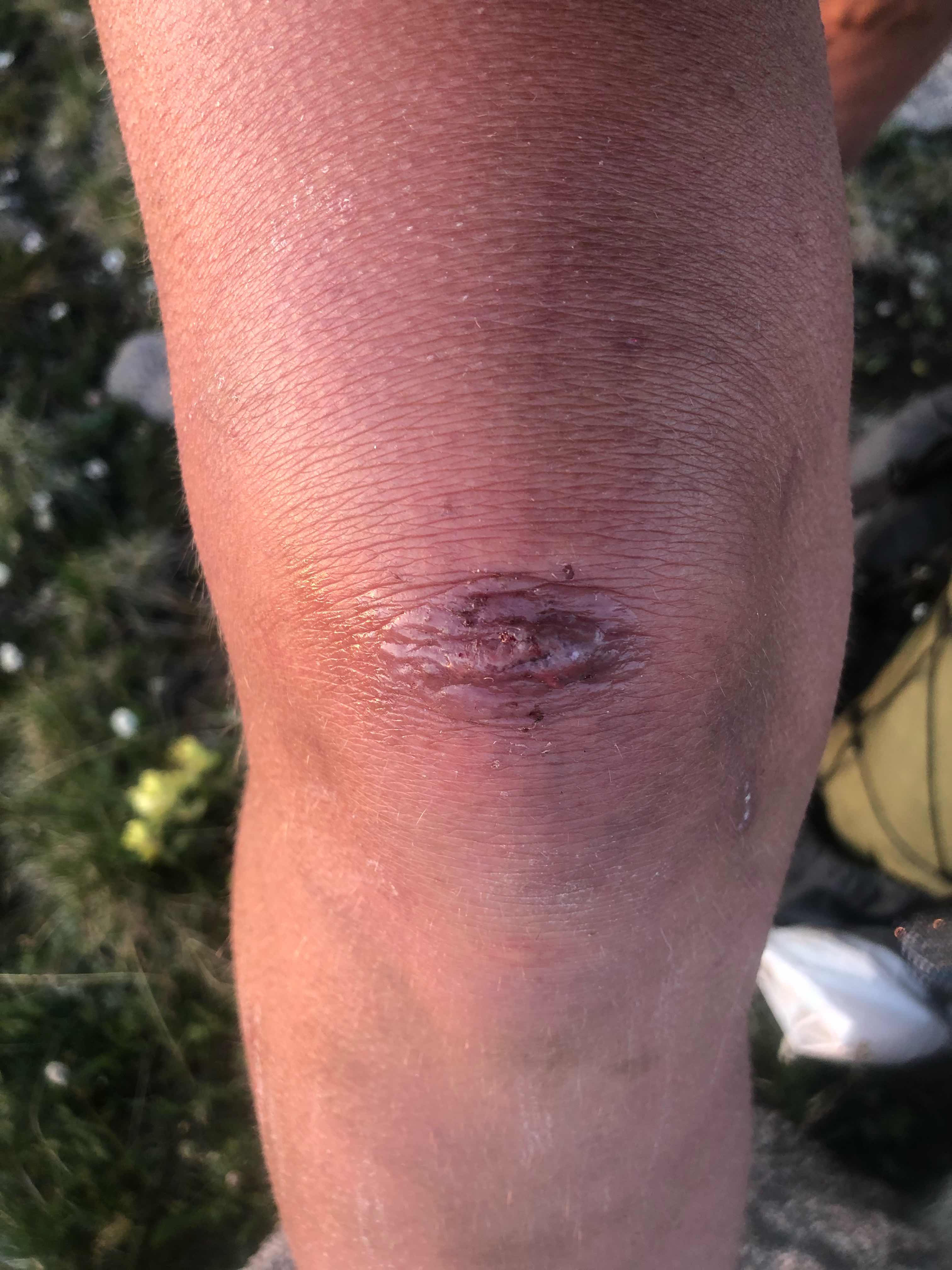 Less swelling in my knee, but puffy looking wound
“A good decision is based on knowledge and not on numbers.”
-Plato