I woke up to the sound of cows mooing all around. I know understand the phrase, up with the cows. I was hoping to hike to the interstate and get an early ride into the town of Lima, MT. Unfortunately hitchhiking is illegal on the interstate and there was zero traffic on the frontage road. I had to wait for the 9:25 shuttle that my hotel runs. One by one all of the other hikers made their way down to the road as well. We had a long 2.5 hour wait. At first everyone was pretty talkative, but eventually settled into silence playing on our phones. 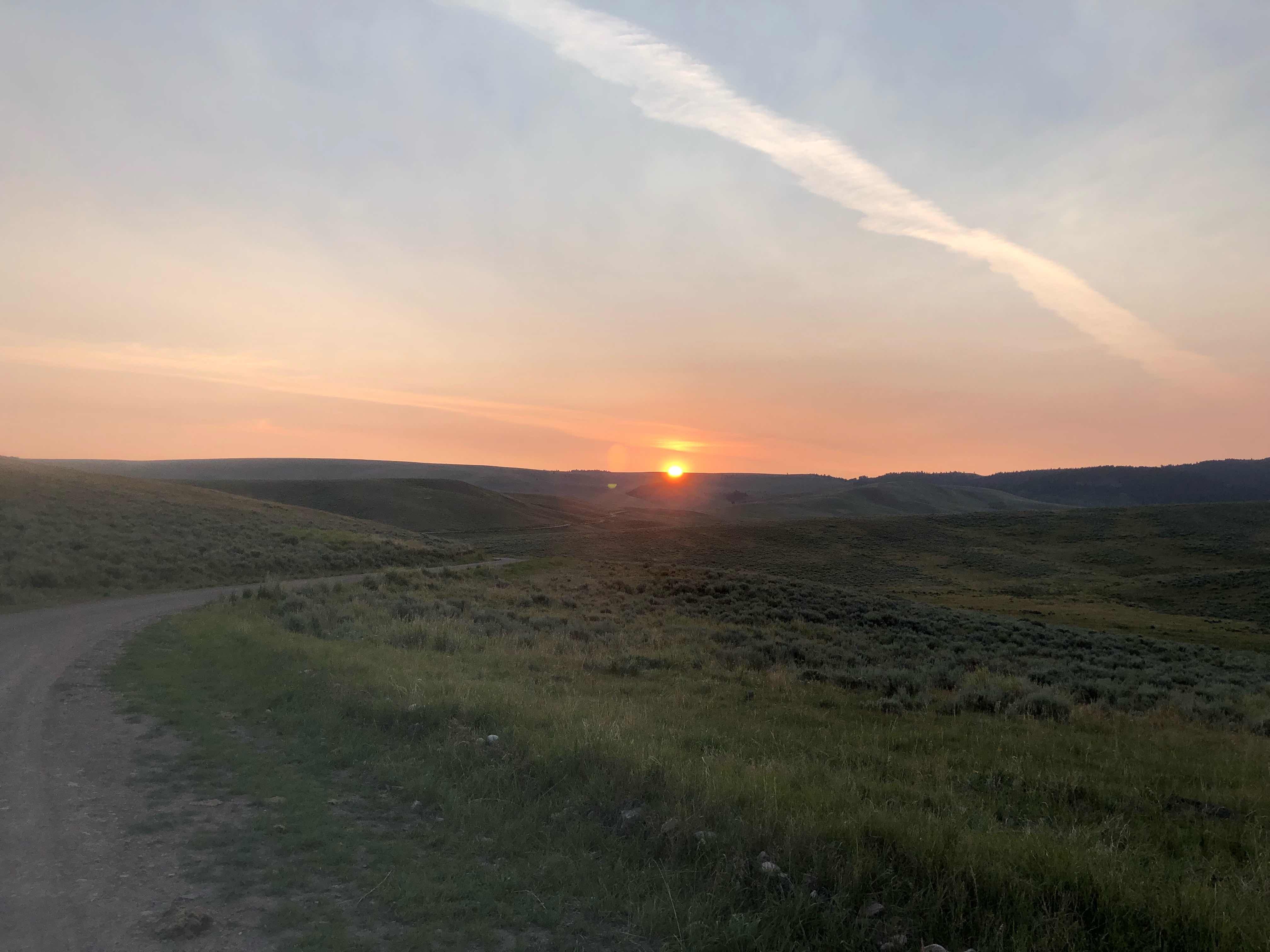 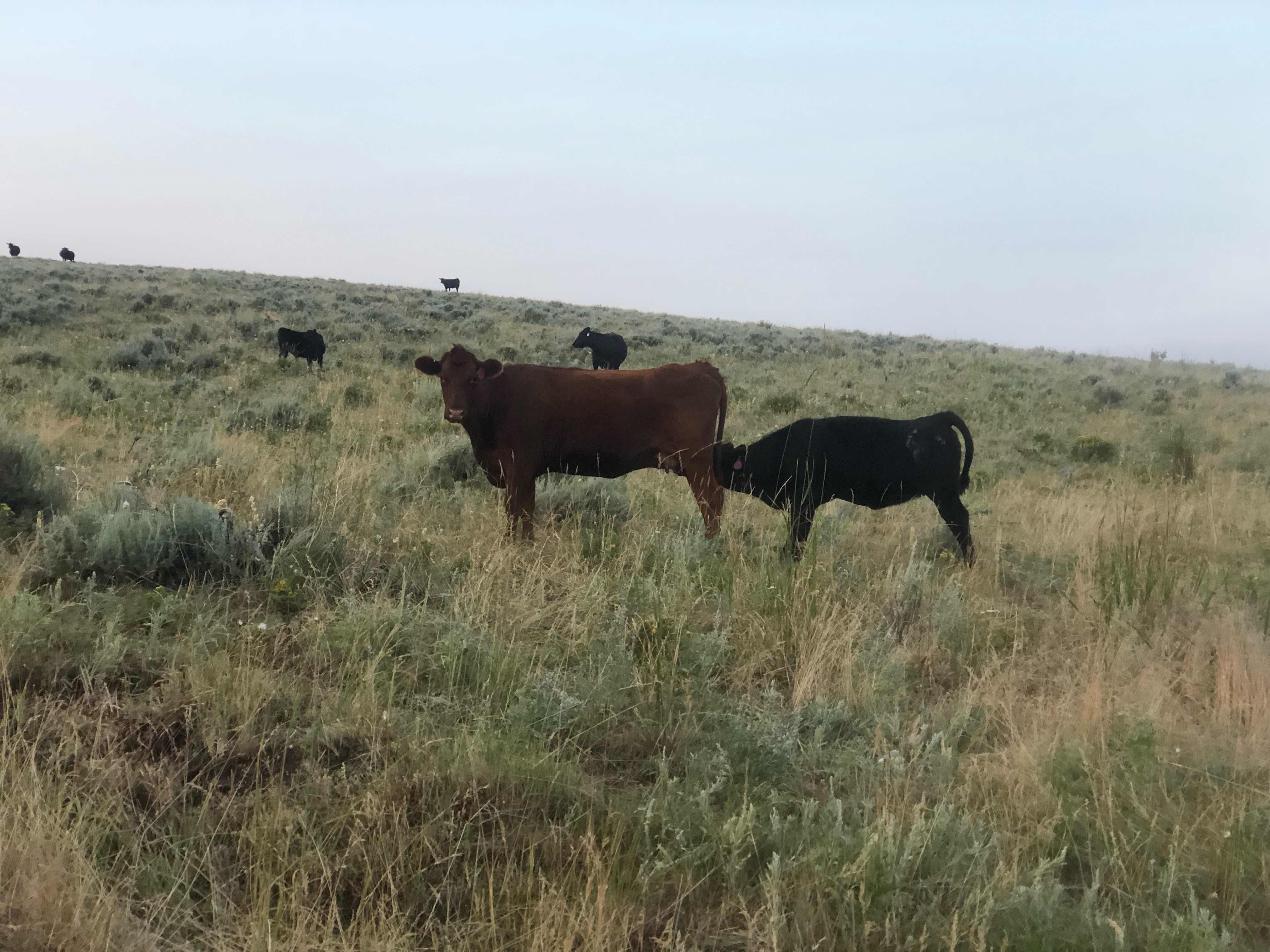 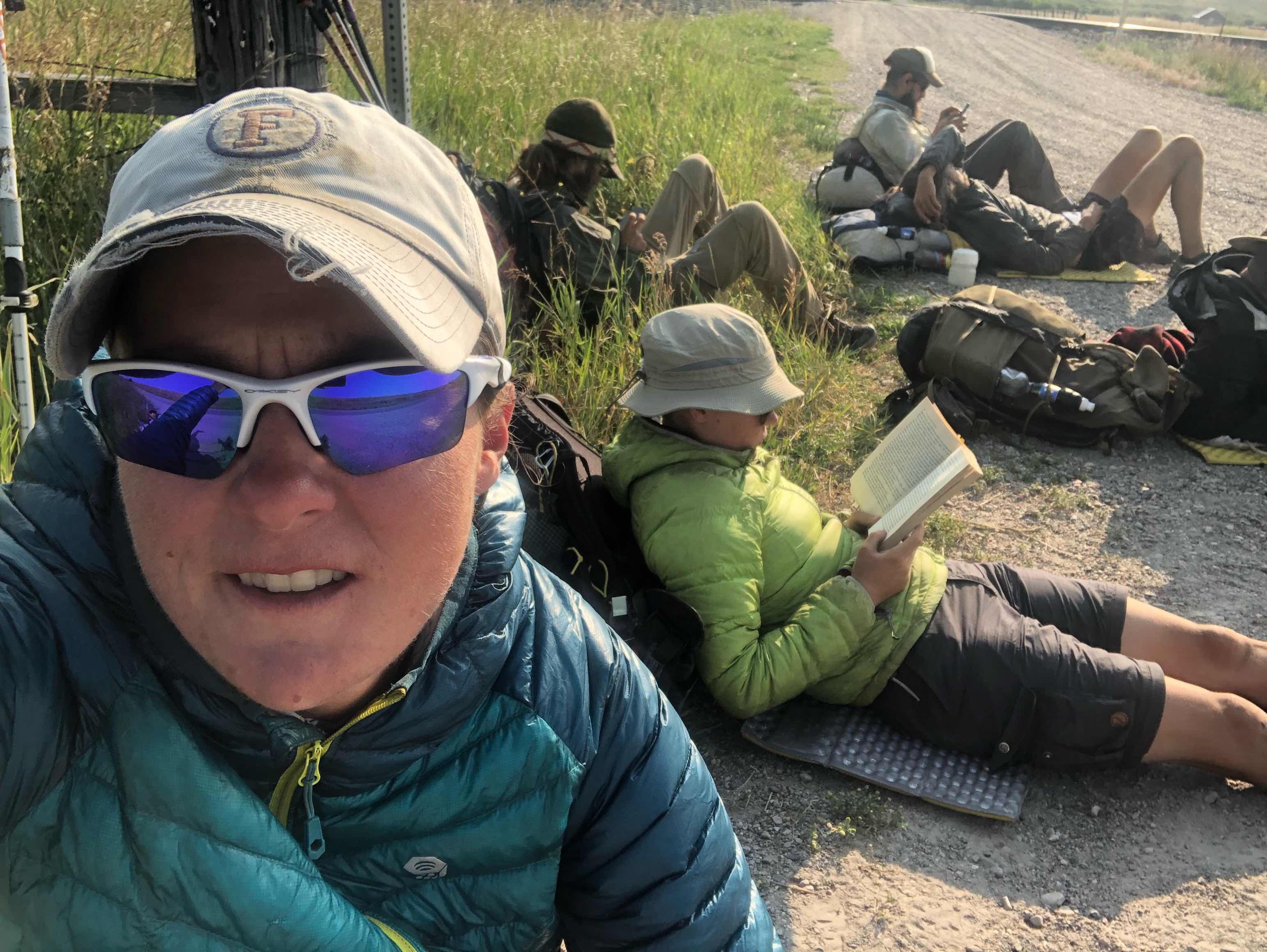 Me, Anchor, Enigma, CleanSweep, and Sling Shot
The time came and went for the arrival of the shuttle. I was beginning to think that we were not in the right spot for pickup. I didn’t have cell service, but Slingshot did. When he called Mike from the hotel he found out that we were in fact in the wrong location. We moved a few tenths of a mile down the frontage road, hopped a fence, and got on the interstate. Mike had already started back home, but turned around to pick us up. All seven hikers piled into his truck for the 25 minute ride to Lima. We were dropped off at Jan’s Cafe for breakfast. There were two more hikers already there, Iveman and Cattywampus who I haven’t met yet, but have heard there names. Breakfast was delicious. I was starving as I had eaten all of my food last night. 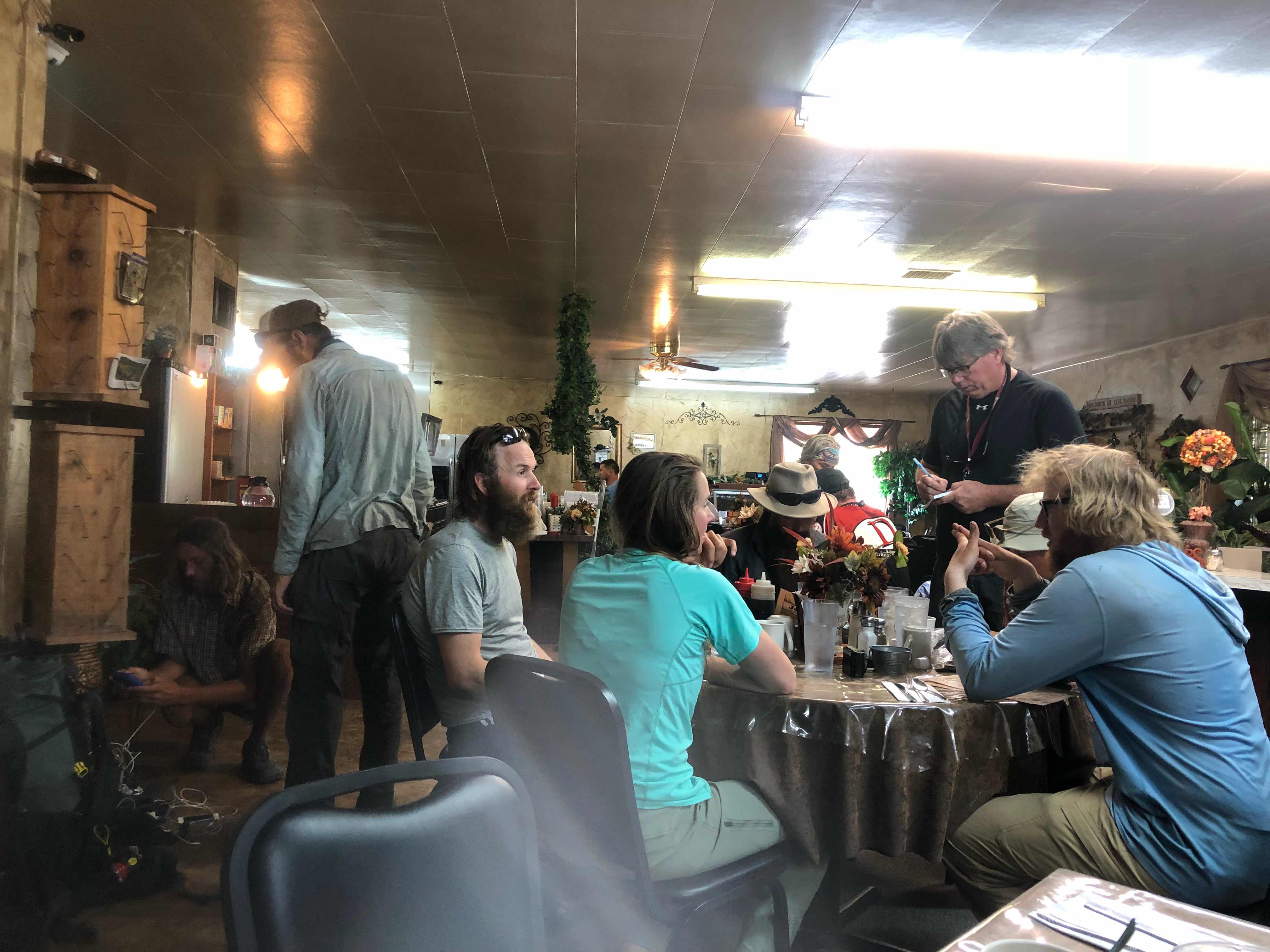 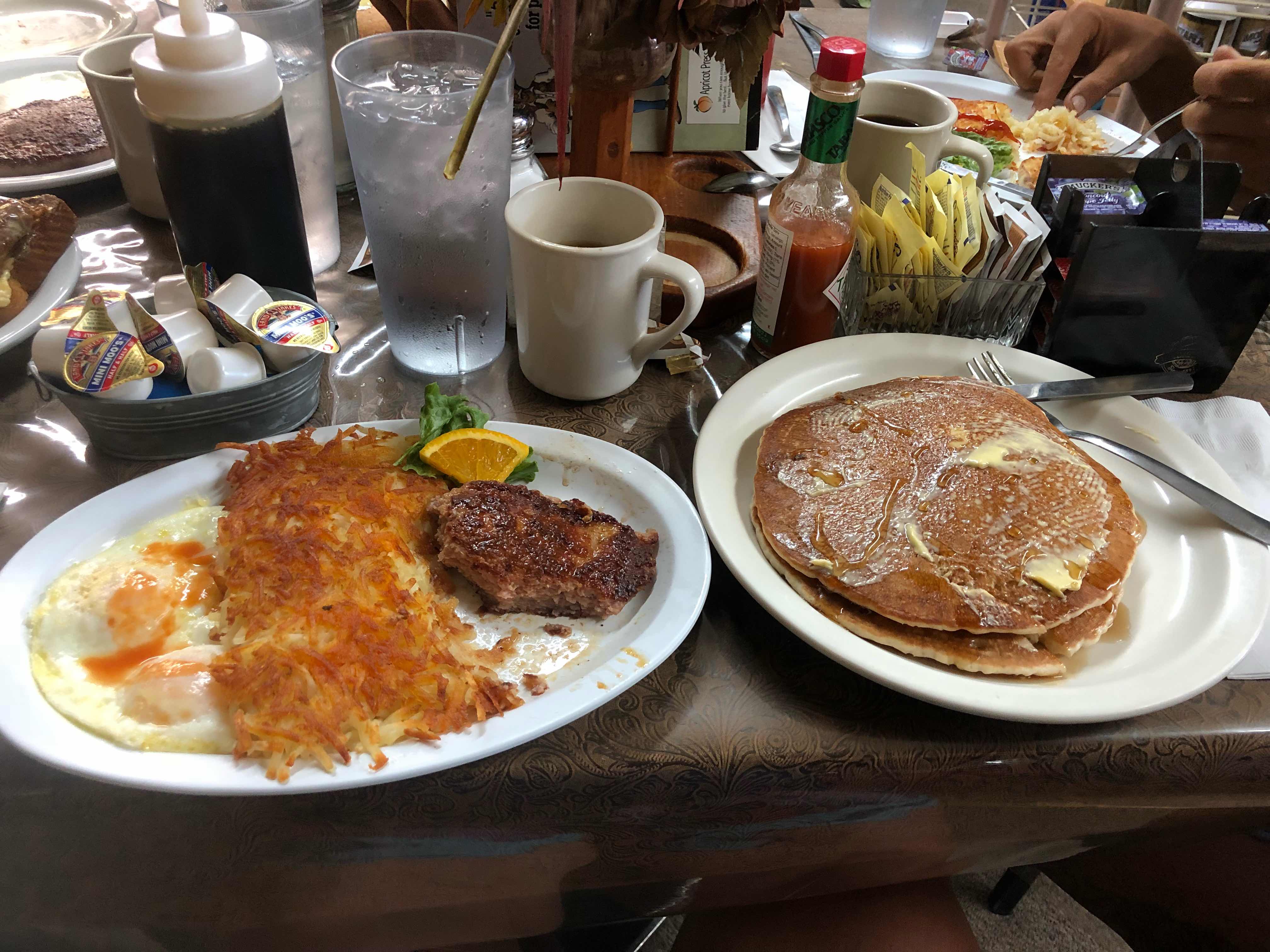 Small bite to eat
I sat with Enigma, Cleansweep, and Slingshot. I really enjoyed their company. After breakfast we walked over to the motel to check in. I finally got my shower, which was fantastic and got in line to do my laundry. I had sent a resupply box here so that chore was done quickly. I was able to rest and relax for most of the day. As always the time flew by. More hikers kept arriving throughout the day. I don’t think I have seen so many of us in one place the entire trail. I spent time talking with hikers and relaxing in my room. 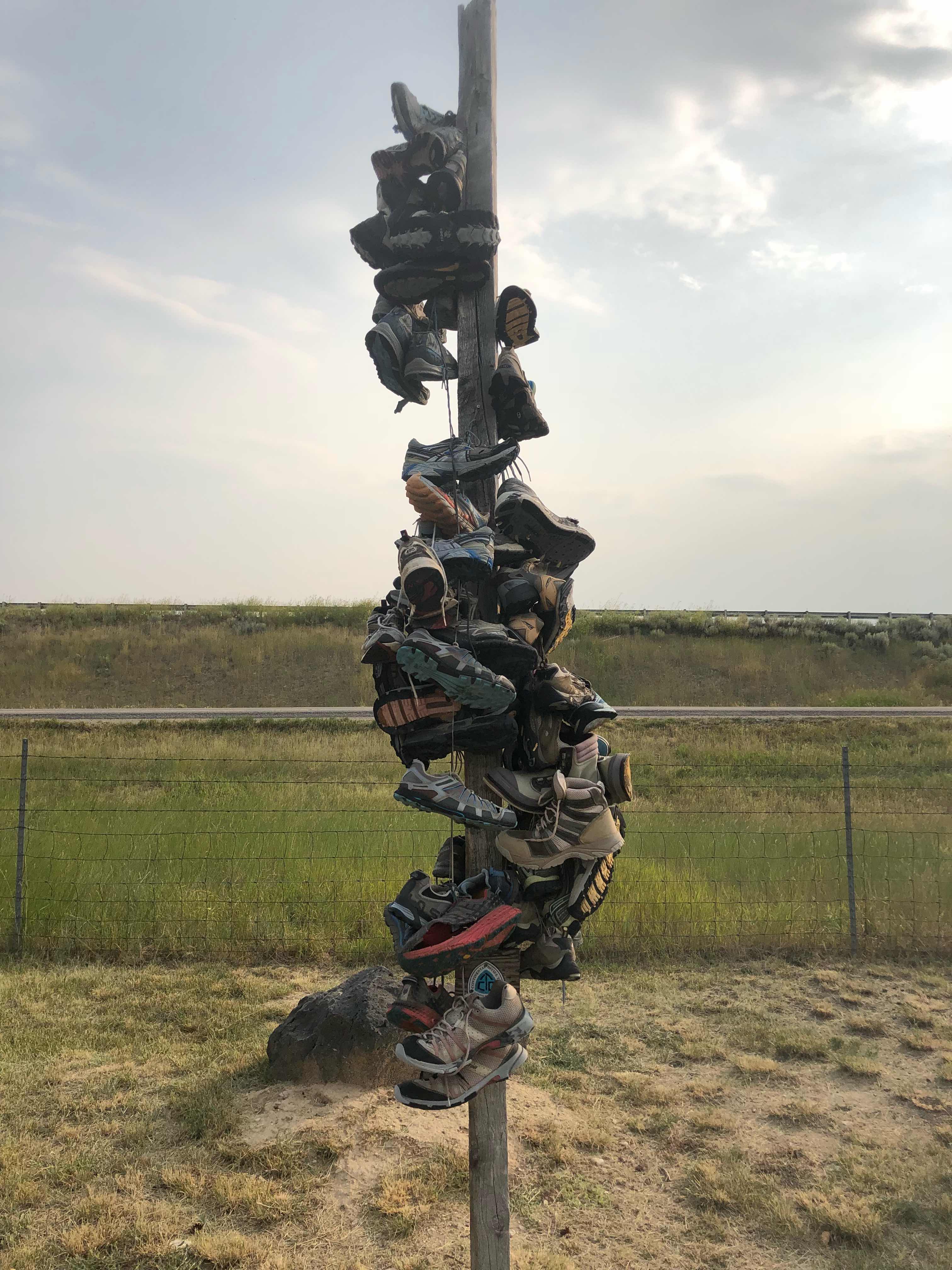 Shoe tree at the motel 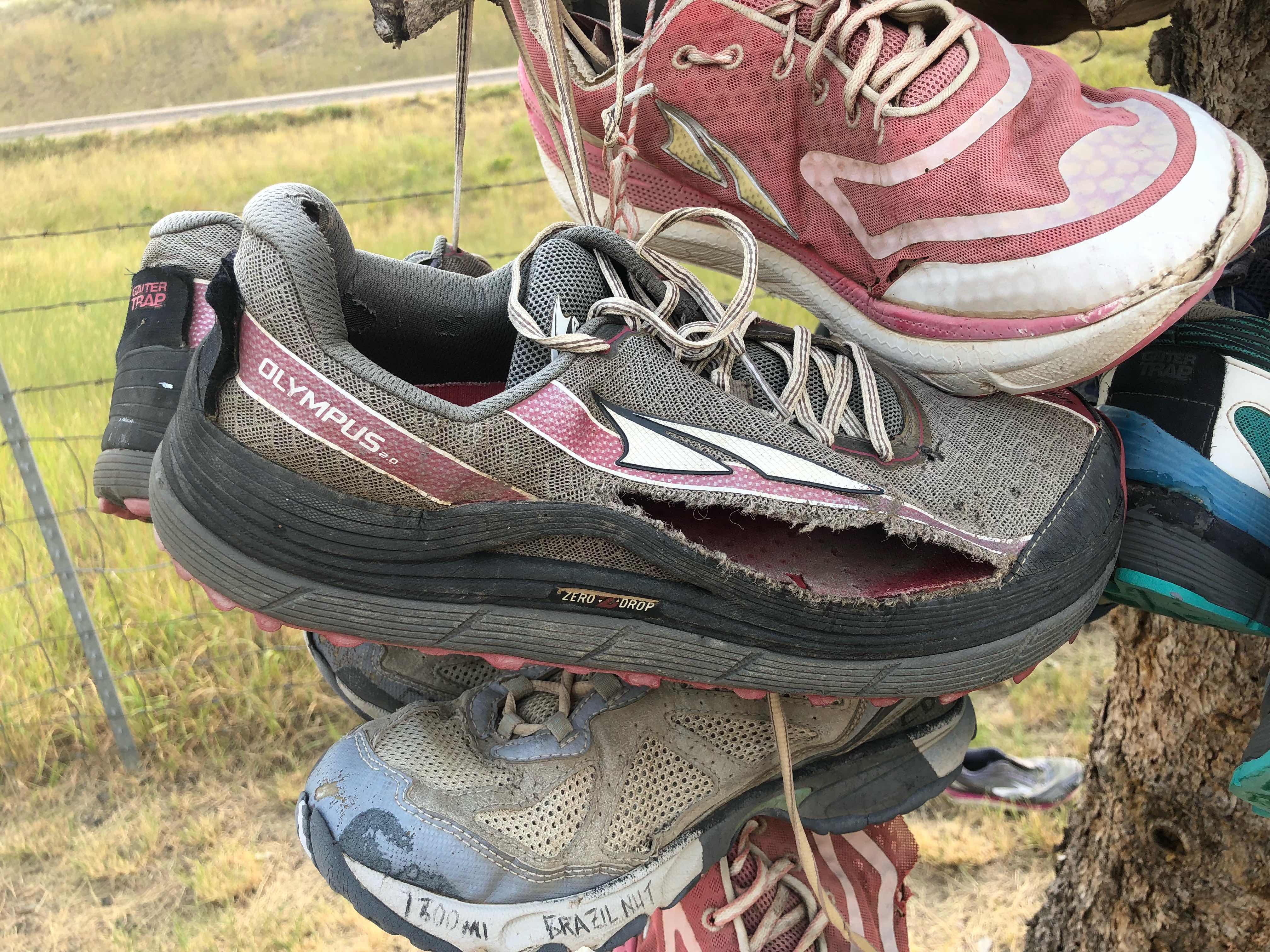 Thruhiking is rough on shoes
Eventually it was time for dinner. The local steakhouse had amazing reviews so I thought I would treat myself and go there. SkyEyes arrived just as I was getting ready to go eat. The community shower was being used so I let him in my room. Once he was clean we walked over to the steakhouse, they were closed for a private party. What a bummer! It looked like Jan’s cafe would get my business again. The place was packed and service was slow. My burger was pretty good though. I went to the gas station and bought a pint of ice cream after dinner. All the hikers were congregated outside. I hung out for a little bit, but I really wanted to watch a documentary on Netflix. I went back to my room, ate my ice cream, and watched Made to Be Broken. A documentary about Karl Meltzers record breaking AT hike. I stayed up way to late. Tomorrow I’ll take the shuttle back to the trail and continue hiking north.
“Nature will bear the closest inspection. She invites us to lay our eye level with her smallest leaf, and take an insect view of its plain.”
- Henry David Thoreau