Day 37- Not Sure What Is Worse: Hurting Feet Or Damaged Ego 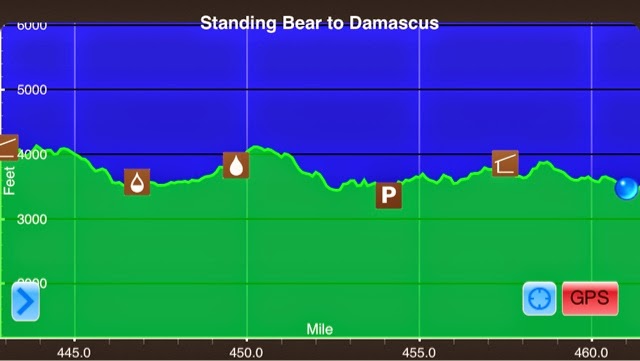 Apparently the hike from Iron Mt. Shelter into Damascus is called the Damascathon. It's about a 26 mile hike into town, but the terrain is pretty easy. A lot of people around my age attempt it every year. A few of the people I was camped around even talked about giving it a shot. I went to bed last night with visions of greatness dancing through my thoughts.
Airlock and Cherokee slept in a little bit this morning. I actually got myself up at 6:00. We took our time leaving camp. I had time to make oatmeal and Cherokee helped me out by wrapping my blisters with athletic tape and duct tape. I left camp around 7:45, thinking I could hike 26 miles into town. By mile 3, I was near tears. I haven't cried about anything yet since I started this journey, that streak was almost broken several times today.
Early in today's hike, I came across the Nick Grindstaff Monument. At some point I think it must have been a grave, but now it's just a monument. 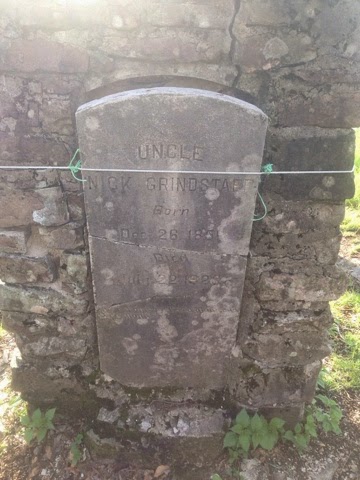 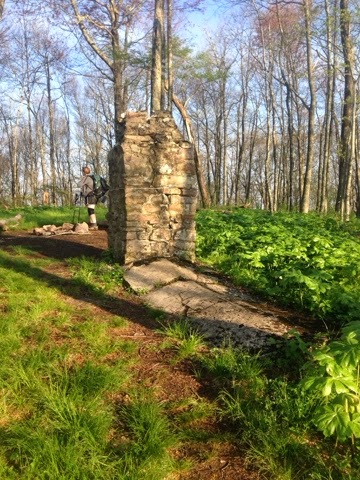 Creepy Campsite next to monument
Right after the monument I caught up to Cherokee. He had stopped to filter water and waited for me to catch up to check on my feet. I told him they felt great and would see him at the next shelter, 6.2 miles away, for lunch. Shortly after that I knew I was in trouble. Every step was agony and there was nothing left for me to do. I had my feet wrapped as good as they could be, I had on a liner socks and my wool hiking socks. I used body glide for feet as an anti friction tool. My only other option was to hike barefoot or in flip flops. Not very good options.
I tried distracting myself by listening to my audiobook, but that didn't work today. I was just getting ready to try listening to my iPod shuffle when I saw movement ahead of my. I looked up and saw 2 guys wearing guille suits and carrying shotguns. I was no longer in a state or national forest, but crossing through private land. Apparently, it's turkey hunting season in Tennessee. I was a little nervous about being so close to them, so I picked up the pace, my feet temporarily forgotten. I decided I was hungry and went to grab a snack out of my hip belt, but then I remembered that I had to ration my food because I was low on snacks. Just around the next corner I saw an orange box and thought it must belong to the hunters. I was curious and walked over to it. I couldn't believe my eyes.... 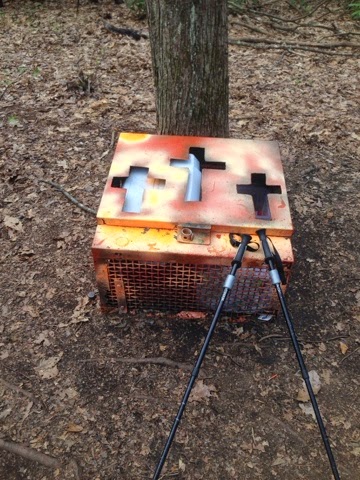 Trail Magic in the Middle of the Woods 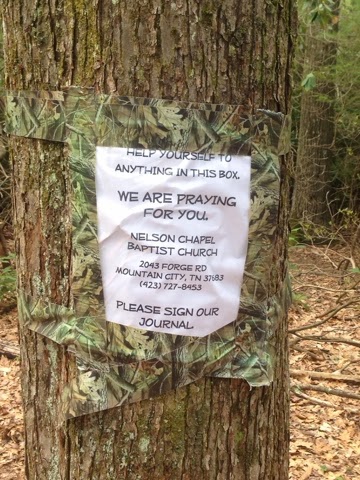 Thanks Nelson Chapel Baptist Church
They had everything a hiker could ever want in that box. Different varieties of Little Debbie snack cakes (I probably took too many), a cooler with Mt. Dew and Orange Crush Soda, a bunch of medical supplies, shampoo, deodorant, and a few small travel sized bibles. I could have survived without it, but it definitely brightened my day. I didn't have to worry about running out of food and having a semi-cold soda was a big treat.
I was on a pure sugar rush for the next few miles. Hiking through private land was surreal, but beautiful in its own way. We walked through a farmers pasture and over some barbed-wire fences. 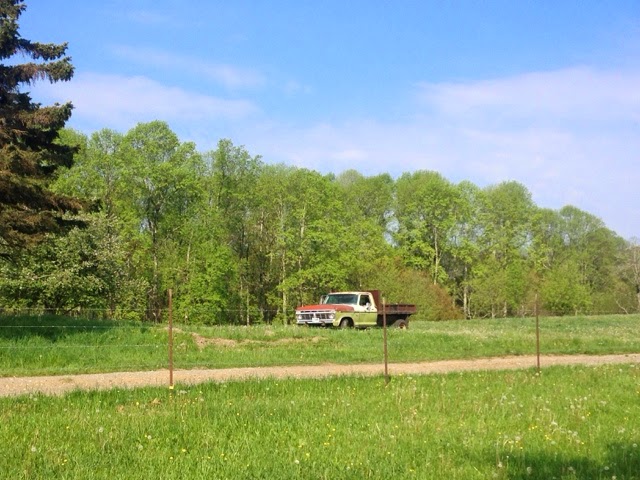 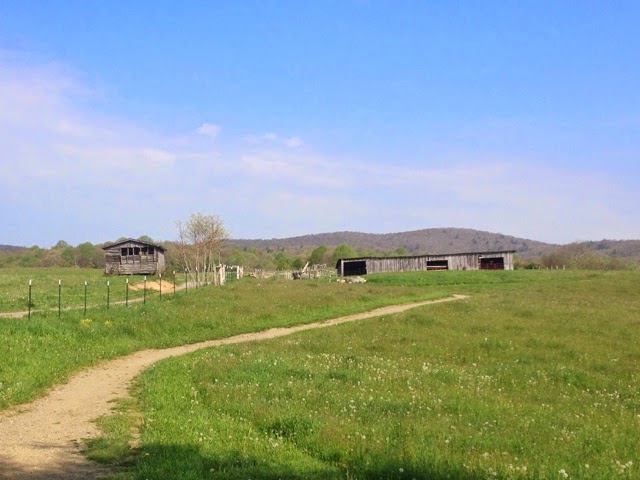 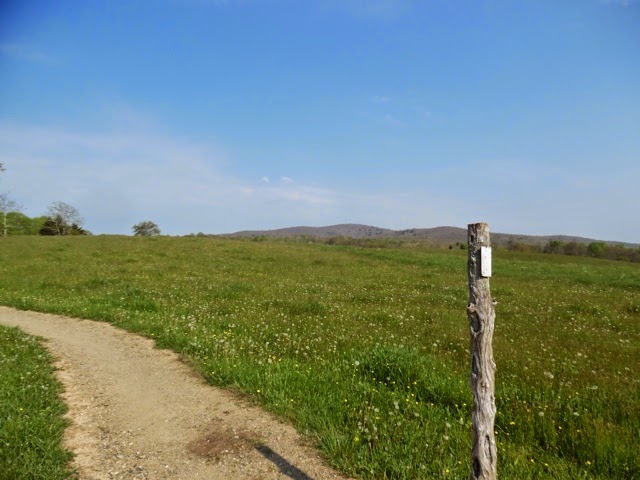 Hard to capture the beauty 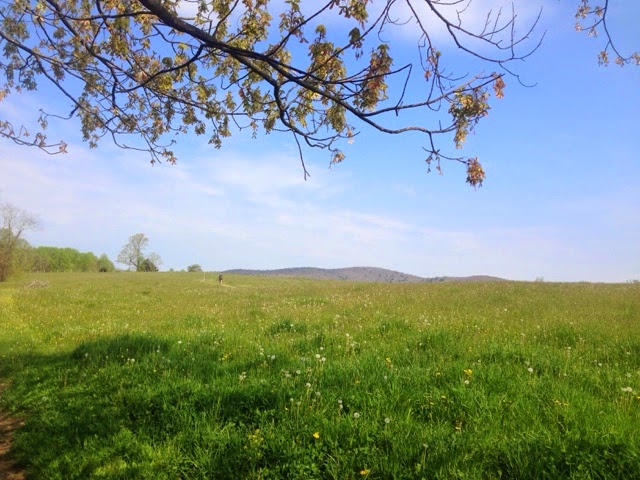 Field of wild flowers, with Mountains in background 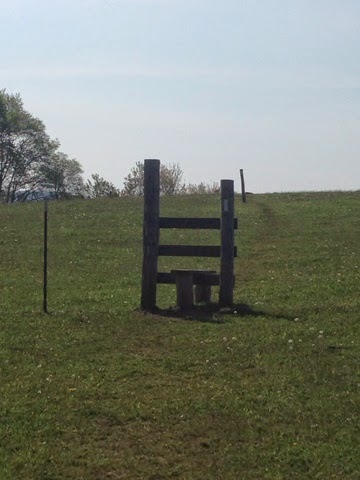 Way over barbed-wire fence
Shortly after this section I rolled into the shelter. I had been passed by nearly everyone that camped with us last night. The only reason I made it in before Cherokee, was he stopped to chat with a day hiker.
The terrain was very easy today and I should have been crushing out the miles, instead, all of the hopeful Damascathonites, were running me down. For the second time today I almost cried, not because of the pain, but because of my ego. I'm a very competitive person and failing today did not sit well with me. I know what you must be thinking, it not a competition, it's just a walk in the woods. You're right, but it's good to push yourself and to have goals, besides I've got to pass the miles some how.
I limped out of the shelter unsure how I would hike another 13 miles. The next 2 miles were pretty much a pity party. I never thought about quitting, but hitching into town was definitely looking like a good option. I stumbled into Low Gap after another mile. I was stoked to see a road there. I knew I could catch a ride into town, but I also knew if I did that I would lose my group. I decided right then  and there to suck it up. If I could stop focusing on my pain and divert my attention elsewhere I knew the miles would go by faster. I used my Jedi powers and hiked on. The next meeting point was a shelter almost 5 miles away. Airlock and Cherokee had stopped at Low Gap for lunch and I told them I'd see them at the shelter. I put my audiobook back on and focused on nothing else. Before I knew it I was walking up to the shelter. I couldn't believe it, I had just crushed almost 5 miles in an hour and a half. That's when I realized something was wrong. I had just sat down to figure it out when Airlock caught up to me. She broke the news that I wasn't at the shelter we discussed, this was a disused shelter. I still had 1.5 miles to go. I took a deep breath and soldiered on. The time went by pretty quickly. Airlock, Outro, and Tarp Man were already there by the time I strolled in. Outro and Tarp were pushing on for Damascus, I wished them luck. Airlock and I had already discussed meeting at this shelter to filter water and then push on. The water source was .2 miles downhill, not very much fun, but necessary. It was really hot out again today and there were no more water sources within range of where we wanted to camp. Once Cherokee caught up we decided to go for a few more miles. We decided to do somewhere between 2-5 more miles. Airlock let me lead and we slowly made our way down the trail. I was carrying 8 lbs of water and she had 6 lbs. We chatted the whole way, it helped me keep my mind off of the pain. After an hour we found a really nice campsite. We all decided we had had enough for the day. Weary and sweaty we threw our packs down and began our camp chores. I set everything up and then sat down to look at my feet. Not a pretty site. My left foot now has 3 blisters, but not too bad. My right foot has one ginormous blister. I decided it was time to lance it, gross doesn't do it justice. 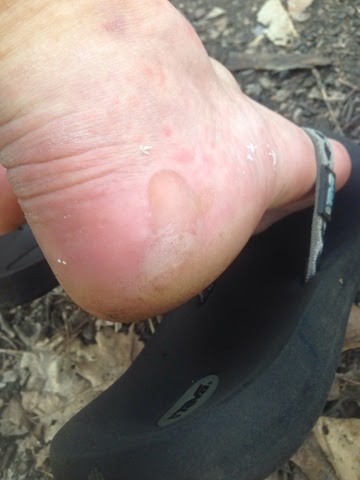 Mega Blister
The plan for tomorrow is to get up early and get going. We are only 8 miles from town and everybody is ready for some R&R. Cherokee lives about 70 miles away and has graciously invited us to his house for a zero day. His wife, Sharon, is picking us up and will be feeding us some delicious food. I'll also be buying a new pair of shoes and Airlock is very excited about getting a latte. It's been over a week since we have done laundry and showered. I've never smelled so bad in my life.
The weather is nice tonight so I left my tarp half off. I'm looking up at the stars and looking forward to tomorrow.
"It's when the discomfort strikes that they realize a strong mind is the most powerful weapon of all."
-Chrissie Wellington, four-time World Ironman Champion
Posted by Yoda at 7:57 PM