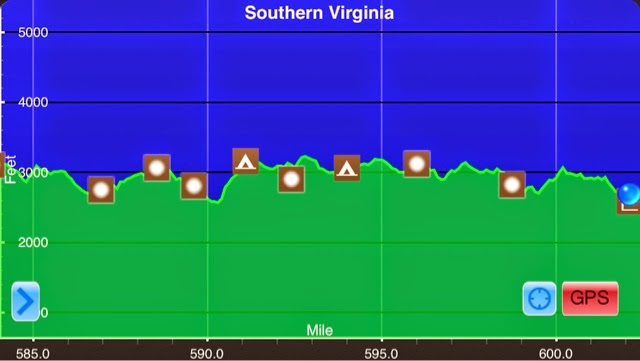 I woke up this morning to the sound of rain bouncing off of my tarp. I guess I should be careful what I wish for. The rain didn't last long, but it did take us longer to get out of camp because of it. It also caused the bear bag rope to tighten down too much for Airlock to get it untied by herself. As I result I heard her cry out, "Yoda, I think we have to cut the line." I quickly got dressed and helped her get our food down. No ropes were hurt in the making of this production.
We ate breakfast and broke camp as quickly as we could, but in the end we both left camp later than usual. For the most part it was another boring day early on. There was not much to look at until we got close to I-77. It seems like any time the trail crosses the interstate it becomes difficult to follow, today was no exception. 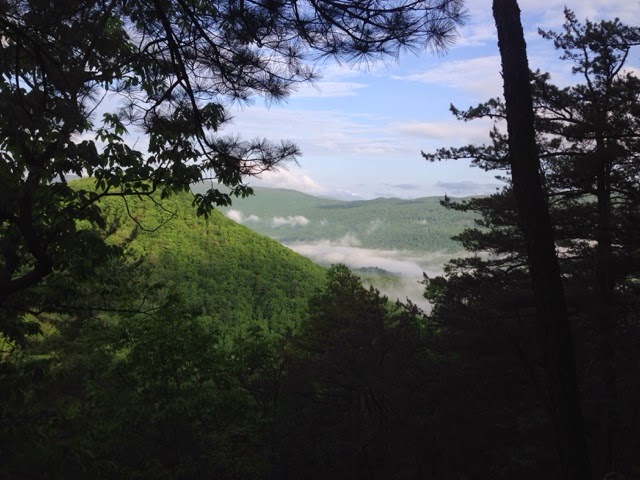 View across the valley 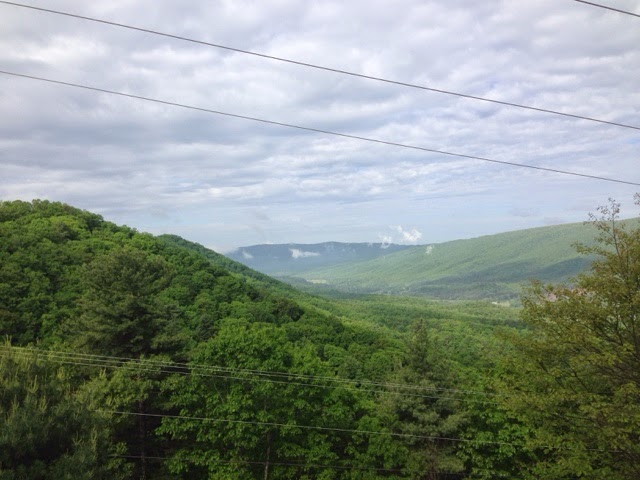 View from opposite ridge
The trail come down to a road that would lead me over I-77. The blazes became confusing. There was a road I could follow or a steep gravel ridge. I decided to try the gravel ridge because the guidebook didn't specify a road walk. I was on top of the ridge and had just decided it wasn't right when I saw a funny sign in the gravel. I definitely chose wrong. 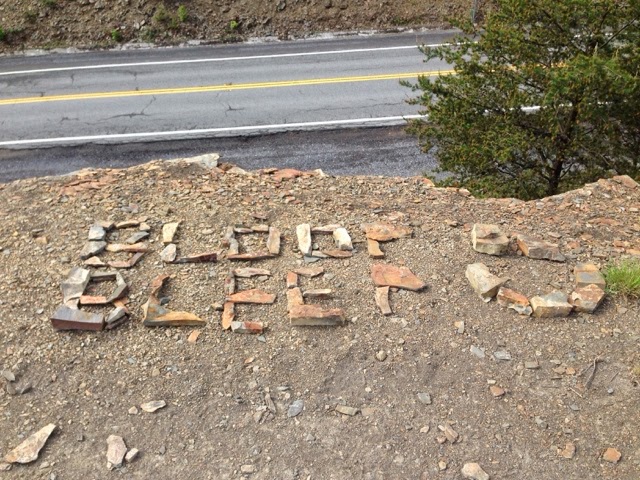 Somebody had a sense of humor about it
After making my way down to the road, I was able to follow it over I-77. I was glad I didn't have to play frogger to get across the interstate. 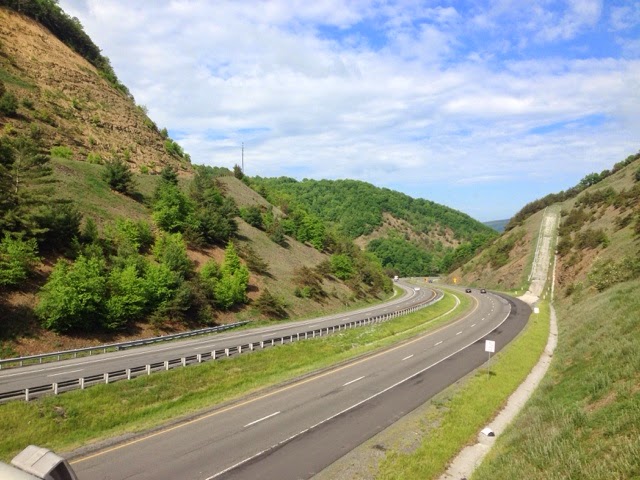 I-77
After crossing the interstate the trail was still hard to pick up. I was glad someone made markings on the ground to help us out. I probably would have gone the wrong way again without them. 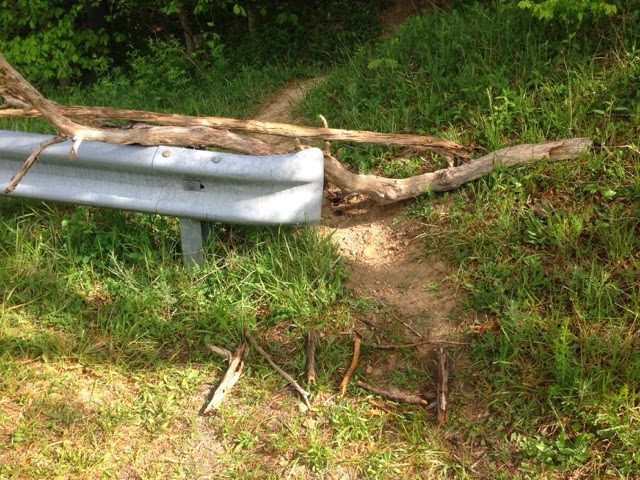 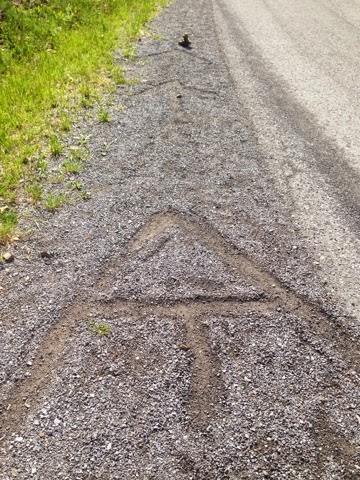 After following the signs I was back on track
The next 7 miles were unremarkable. Our trail guide had zero waypoints for this area. Airlock and I stooped for lunch at an undesignated camp spot. As we were eating Eric(Now called Rusty) passed by. I haven't seen him since day 4 or 5. We chatted for a little while then he pushed on.
It started to rain shortly after lunch, but it didn't last long, just long enough to help cool me down. It would rain two more times throughout the afternoon, but nothing substantial. The heaviest rain of the day was right as I got to the shelter. I couldn't have timed it more perfectly.
A few miles short of the shelter I crossed the 600 mile mark. I thought the marker was uninspired so I spruced it up a little bit. 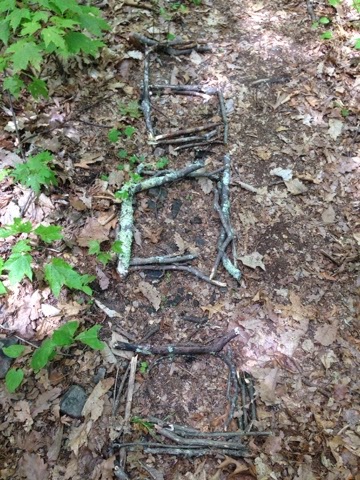 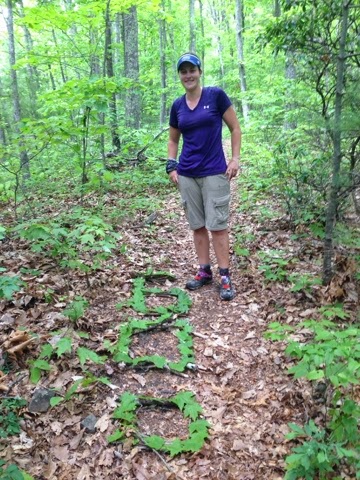 After Airlock and I fixed it up 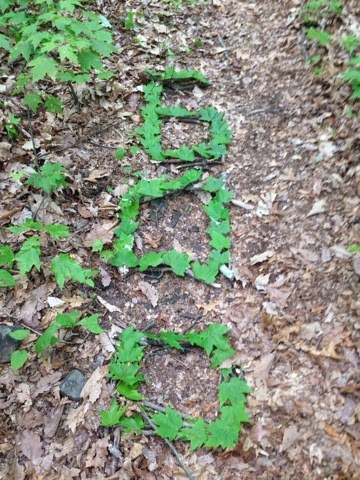 It is supposed to thunderstorm tonight and through the morning. We decided to sleep in and take our time leaving camp tomorrow morning. We will hit Dismal Falls in the early afternoon. My friend, Chris Harding, told me about the falls before I started the trail. The weather should clear up by the time we get there. I think it will even be warm enough to go for a swim. It will be nice to have a leisurely day. 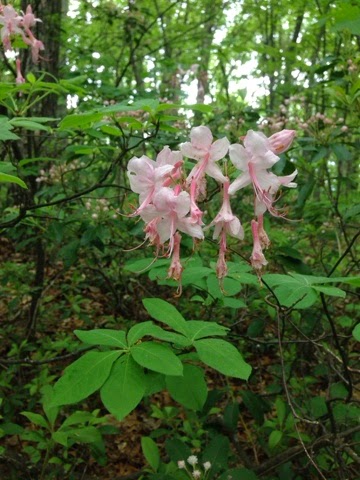 Pink Azalea
"If patience is worth anything, it must endure to the end of time. And a living faith will last in the midst of the blackest storm." -Mahatma Gandhi
Posted by Yoda at 6:09 PM