Day 58- Virginia Definitely Is Not Flat 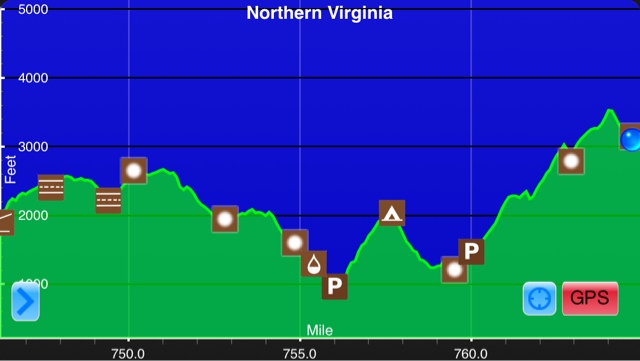 The prevailing statement describing the trail through Virginia is that it's flat. Well, I can tell you, that is a damn lie. Today was one of the toughest days I've had in weeks. I climbed uphill for over four hours at one point today.
Let me back up and start with the beginning of my day. I was a little worried about getting started early. I have relied on Airlock's morning routine of packing up her tent, which is cueben fiber and noisy, to wake me up in the morning. I'm pleased to report that I managed just fine on my own. I was up at 6:15 and ready to go by 6:45. I hung out at the shelter and ate breakfast and drank my coffee. I started hiking by 7:15. My foul mood from yesterday had evaporated by the morning. I knew it was going to be a tough day, but was looking forward to the challenge. I had a steep quarter mile climb out of the shelter and the day was only uphill from there. As I got back on the trail I saw a huge snake. It slowly slithered off the trail as I approached. It looked like a rat snake, which I'm ok with. They eat all of the mice that like to hang out in the shelters.
After an extended climb I got to the top of the hill and was greeted by a nice view. 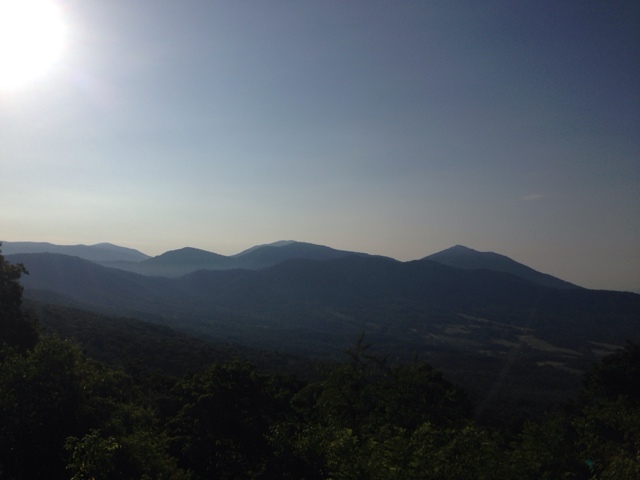 I love the early morning light over the mountains
After climbing up for a few miles the trail went downhill for a few miles. I came out onto the Blue Ridge Parkway(BRP) again. The overlook I came to first was called, The Peaks of Otter Overlook. 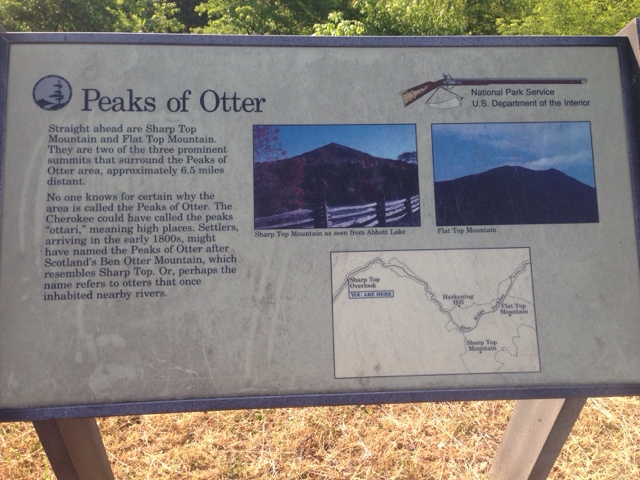 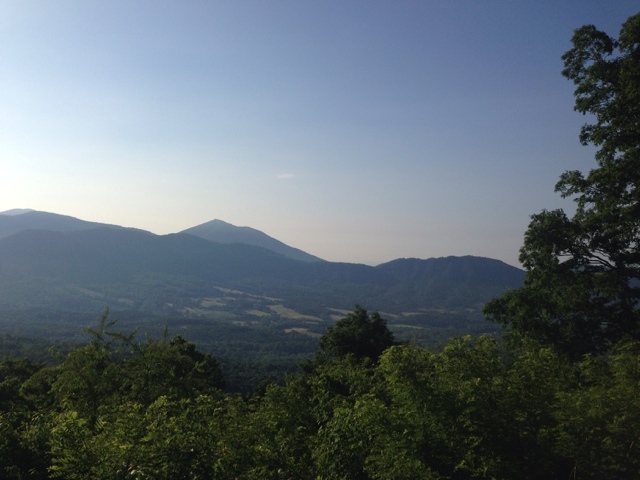 Sharp Top(Center) and Flat Top(Left) Mountains
The next overlook was a short hike through the woods. The Mills Gap Overlook was supposed to have a nice view of the James River. All I got to see was a lot of fog, but it was still pretty neat. 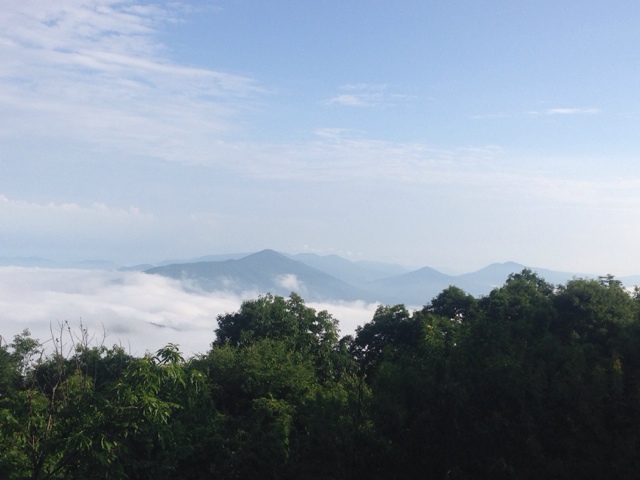 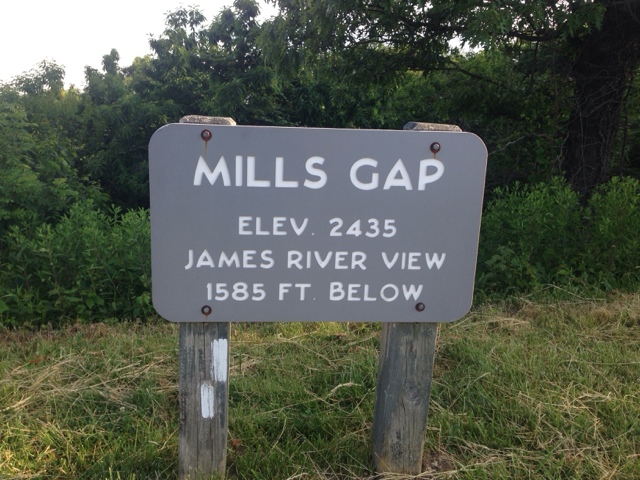 From here I had a brutal downhill section that lead to Jennings Creek, which has a swimming hole. I was very excited for the chance to go swimming. It was very hot out already and I smell very bad. I hurried down as fast as I could. When I got to Jennings Creek there was a large group of thru-hikers there already. They were waiting by the creek on the side of the road trying to hitchhike into town. Four of them were playing hackey sack and smoking pot. I quickly decided not to hang out there. I was disappointed I didn't get a chance to go swimming, but they were not my type of crowd. I ate a quick lunch and moved on. Jennings Creek also signified the start of my long, long uphill climb. I was at 951' elevation and needed to go to 3500' of elevation. I think 951' is the lowest I've been at since I started the trail. The climb up was broken into four distinct sections. The first one wasn't too bad. There were a lot of switchbacks and it was well graded. The only problem I had with it was the temperature and humidity. I felt like I was back in Florida.
After gaining over 1,000' of elevation the trail immediately went back down 800'. From there it was nothing but uphill for over three hours and five miles. By the end I was drenched in sweat and completely exhausted.
I dragged myself into the shelter before five o'clock. I briefly entertained the thought of eating dinner and then doing a few more miles, but quickly decided against it. My feet were bruised and aching and I'm thinking about doing a twenty mile day tomorrow so I can hit some trail magic that is at the James River tomorrow evening. I settled in at the shelter and set about getting my chores done. I've run across two hikers today that have some kind if a stomach bug. Adios, was at Jennings Creek this afternoon waiting for a shuttle to take him into town. He has been sick for over a day. Fig is at the shelter tonight and has been sick for the same amount of time. I kept my distance from Fig and was extra cautious about hygene this evening. I can't imagine anything worse than being sick with a stomach bug while being stuck in the woods. 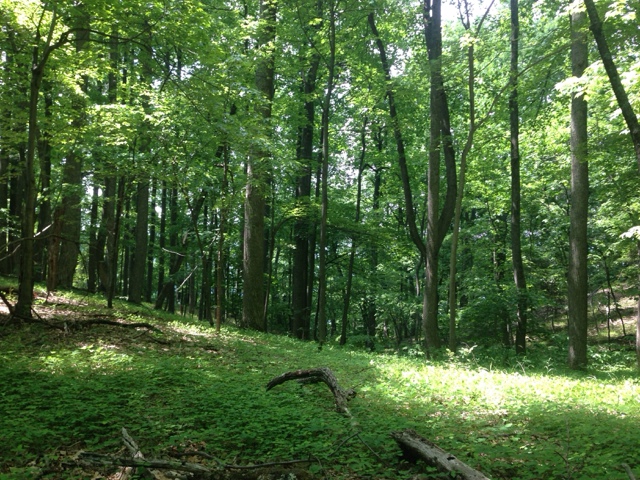 My view for most of the day
"You're off to great places! Today is your day! Your mountain is waiting, so... get on your way!" -Dr. Suess Oh, The Places You'll Go
Posted by Yoda at 7:15 PM