Day 42- The Chamber of Secrets Has Been Opened 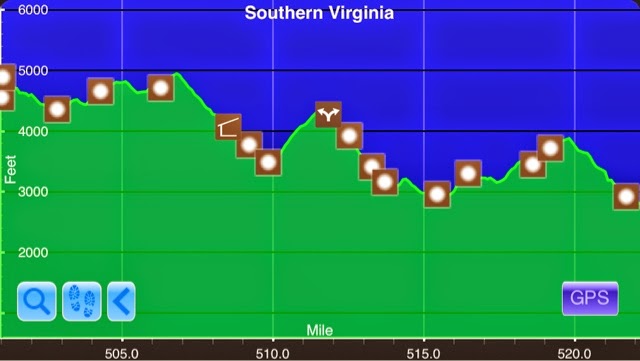 It was so cold when I got up this morning. I had gotten too use to the warmer weather that I forgot how to deal with the cold mornings. I was up by 5:45 because the wind was so strong it woke me up. A cold front had moved in overnight causing the bad weather the night before. Cherokee had fetched our food bags and had coffee ready for me once I got out of my hammock. We all packed up as quickly as we could. It was tempting to keep on all of my warm clothes, but I knew I would regret it on the first uphill. Before I knew it, it was time to say goodbye to Cherokee. His section hike had ended and he was on his way back to civilization. I really enjoyed hiking with him the past few weeks. Our goodbyes won't last long since we will see him again on Friday.
I was the last one out of camp, as usual. The day started off with a small uphill climb, so I quickly warmed up. I briefly entered back into the Grayson Highlands. I didn't see anymore ponies, but I did get a few more great views. 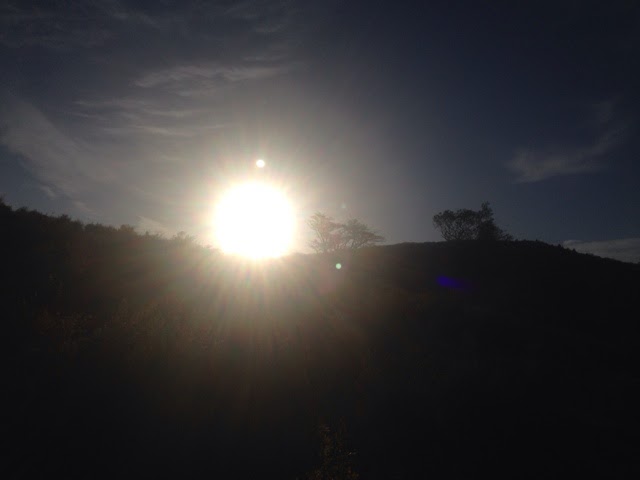 Sun rising over the mountains 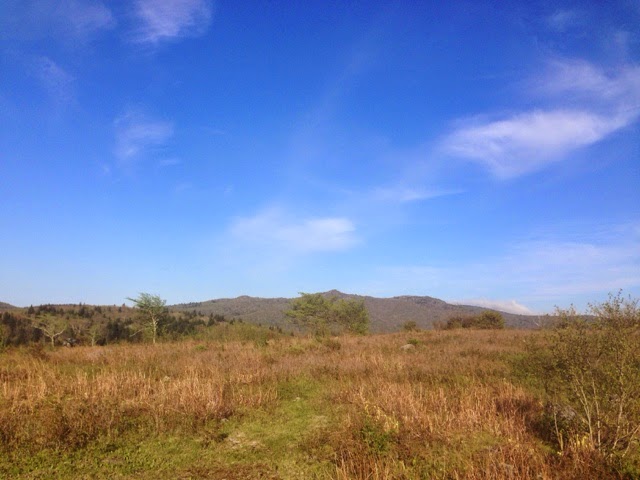 Great shot of the Highlands 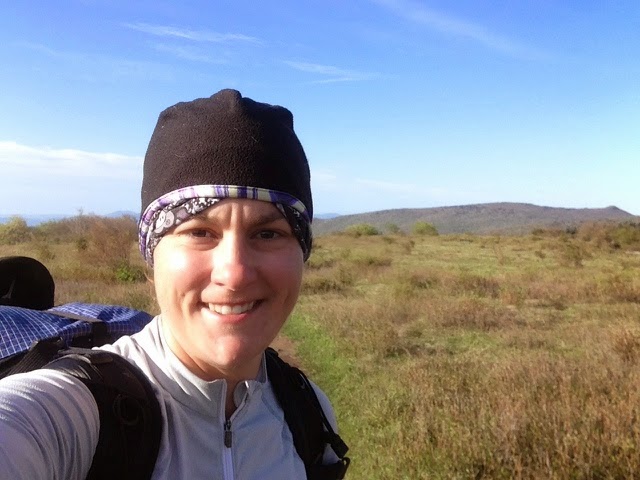 Morning Selfie
As I exited back out of GHSP, I finally got cell phone reception. It was the first time I'd had reception in two days. I sat down in the middle of a cattle paddock to get my blog to post. Another thru-hiker named, Mosey, caught up to me and looked at me like I was crazy. I explained about my blog and quickly moved on. I had 3.5 miles to go before I was supposed to meet up with Airlock, and I didn't want to keep her waiting. The trail was very rocky again, but my feet were holding up well.
We have been passing a lot of other hikers that are going southbound. I'm pretty sure they are heading to Trail Days, in Damascus. It's a huge festival for hikers that's an annual event. They are planning to have thousands of hikers attend. I don't do well in such big crowds so I will not be attending. It will be nice to have the trail practically to ourselves for a few days.
I made really good time after my cell phone stop. The trail was pretty nice terrain. I saw a few curious things though. I saw a southbound hiker peeing 2 feet from a water source. I tried to educate him on why peeing close to water wasn't cool, but all I got in return was a blank stare. A little further downstream I saw another guy, first guys friend, drinking from the same stream without filtering. I asked him if that was a good idea. He asked me why I cared what he did. I told him his friend was peeing next to the same water source upstream. I think he got my point after that. Not to far later I saw another guy pooping in the woods. He was actually reading a newspaper. That was quite the sight to behold. He seemed completely oblivious that he was next to a hiking trail. It was a pretty interesting morning.
I met up with Airlock for a quick snack. We talked about our plans for the rest of the day. We had two options, camp at a designated spot that would put us at 16 miles for the day, or push on to the shelter for 19 miles. We were making such good time we decided to try for the shelter. She left before me because I'm faster on the uphill. We would meet for lunch a little bit later. The uphill wasn't too  bad. With my "trail legs" I can usually climb for an hour before I need to stop and rest. I caught up to Airlock and we found a nice stream to sit by and have our lunch.
We hiked together for the rest of the day. The terrain was very easy and we made great time. As we were discussing how much we enjoy ice cold coke and we haven't had much luck with getting it at trail magic lately, we came to a road. It was very serendipitous to find a guy handing out trail magic, you usually don't see much of that during the week. He had ice cold cokes and Oreo cookies. It was perfect. 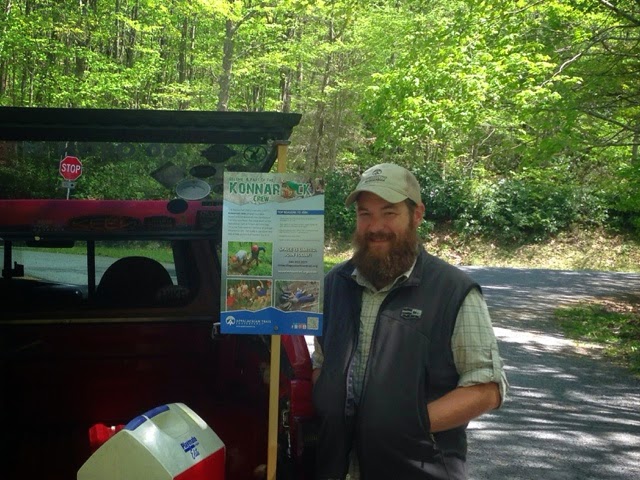 Thanks Storytime. NoBo thru-hiker from '09
The next portion of the trail looked very easy and we were both jacked up on coke and Oreos. I was in front of Airlock when I heard a rattling sound. I saw a flash of movement next to the trail and it took my brain a few microseconds to process what I was seeing. 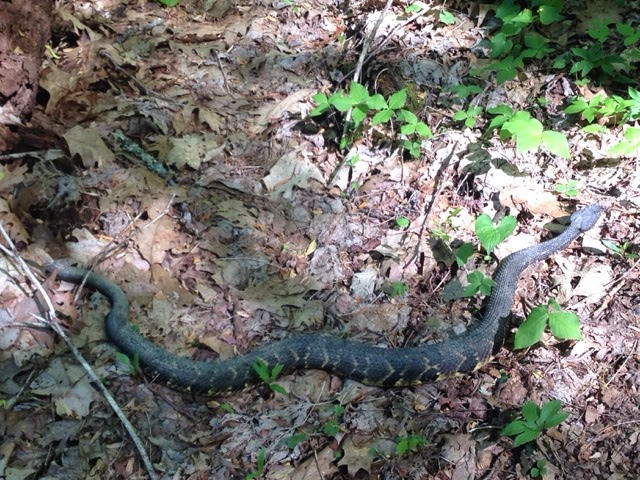 Giant Rattlesnack
I'm not sure how close it got to striking me, but I can promise you that I almost crapped my pants. It took almost a mile before my heartrate came back down to normal. The rest if the way to the shelter I thought every branch and root was a snake.
We made it to the shelter with no more incidents, although it seemed to take forever to finish the last mile. The shelter is packed tonight. A lot of section, and overnight hikers are here. The colleges in the area just finished and lots of students are taking advantage of the nice weather. I think there are 15-20 people camped here tonight. I'm hoping everyone quiets down soon. Tomorrow will be another long day for us, but we hit a road where we can get pizza delivered. Airlock and I are both really looking forward to that. This next section isn't known for the views. Supposedly it's nothing but forest with zero summits, but I've heard that about Georgia and there was plenty of views to be had there.
"Loving what you do doesn’t mean you are never going to be faced with trials. It rather means, you are highly qualified to persist, persevere and endure till the end because you are enthusiastic about seeing the joyous end."
Israelmore Ayivor, Dream Big!: See Your Bigger Picture!
Posted by Yoda at 7:15 AM