Day 55- Sunrise To Sunset And All The Wow In Between 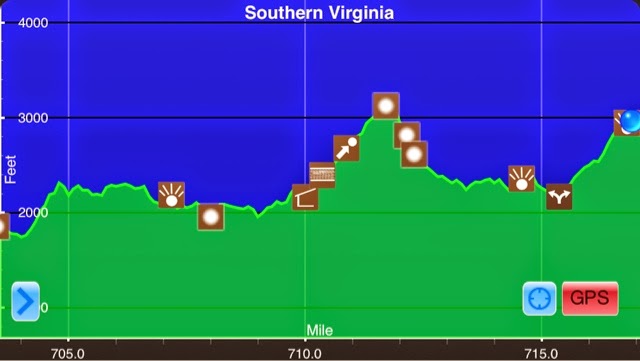 Today was fantastic!!! It was one of my favorite days on the trail so far. I woke up around 6:00 after a great nights sleep. I don't sleep through the night very often out here, but I did last night. I packed up quickly, forgoing my usual morning coffee and pop tart. We only had to hike two miles until we got to a convenience store/gas station. On the hike down to the store I was able to snap a picture of an early morning view to the north. 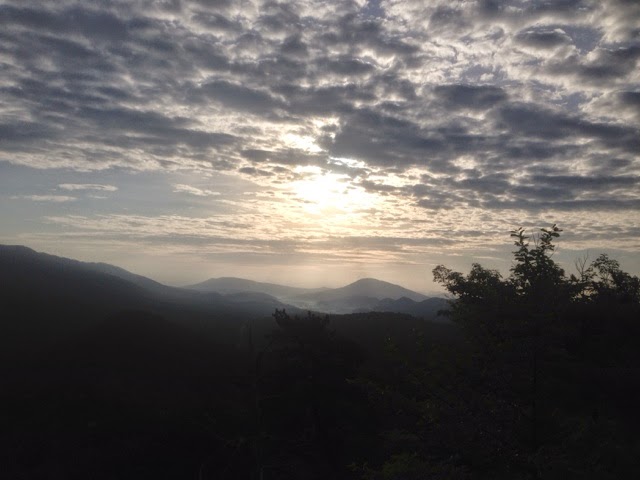 View from Rawlies Rest(almost a sunrise)
Swinging by the convenience store was a necessity for us. We needed to do a small resupply to hold us over until lunchtime tomorrow, when we will get to Daleville to do a full resupply. I only needed to buy a dinner and a few snacks. I also got a Starbucks Frappicino, a candy bar, and a BBQ sandwich for breakfast. After wolfing everything down and repacking our food bags, we headed out. The early part of the hike had one tough climb and it was already hot and humid out. Finally, something living in Florida is good for out here. I'm not as bothered by the heat as other hikers seem to be. As we came down from a mountain to a road crossing I saw a parking lot with a tailgate tent set up. I couldn't believe my eyes, trail magic!!!
When we stayed at Wood's Hole Hostel last week, we met section hikers, Skittles and Soda Pop. They told us of their plans to do trail magic, but I never dreamed we would see it. 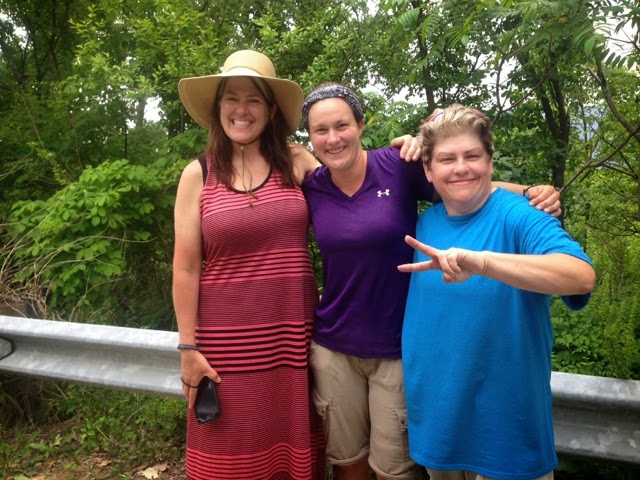 Skittles, Me, and Soda Pop 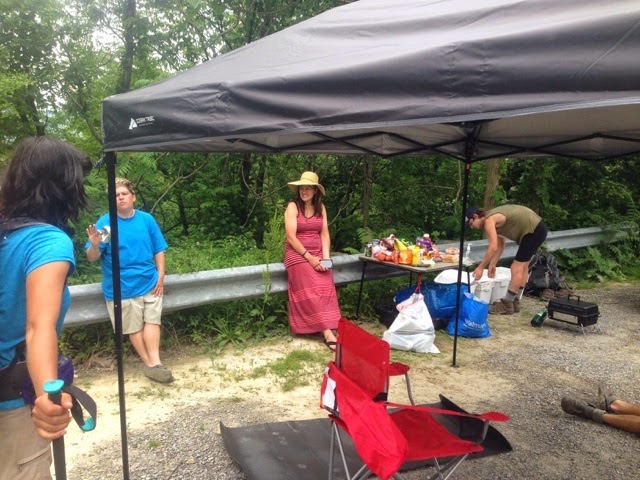 Fantastic Trail Magic
They cooked us chili cheese dogs with chips, soda, Gatorade, and beer. It was great to see them again. They are such fun-loving people with a great sense of humor. Congrats on finishing your section hike. They had already done the section we were preparing to do and were a wealth of knowledge. I could have stayed there all day long, but the mountains were calling my name.
I felt like a kid on Christmas morning. I've looked forward to McAfees Knob since I learned about the AT. When I was thinking about hiking the AT, pictures of McAfees Knob helped me make up my mind to do it.
I raced up the mountain. It was probably the fastest I've ever gone uphill. The weather forcast called for rain from 2-4 and it looked like I'd get there around 3. I was hoping the weather would hold off long enough to get my pictures, but I was prepared to wait all day if I had to. I didn't plan on the clouds and rain adding to the pictures. They turned out fantastic due to the weather. 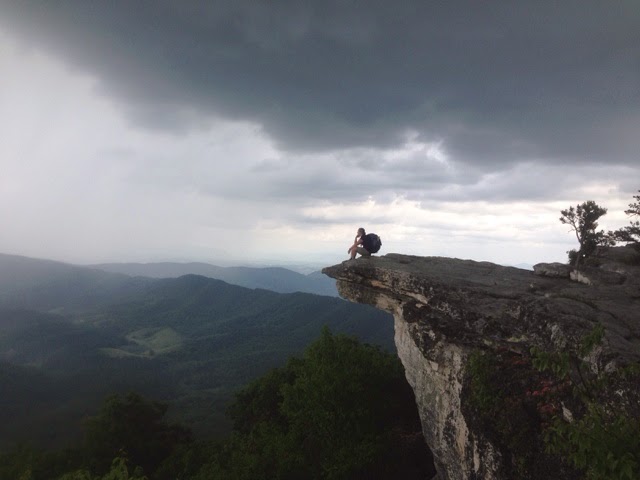 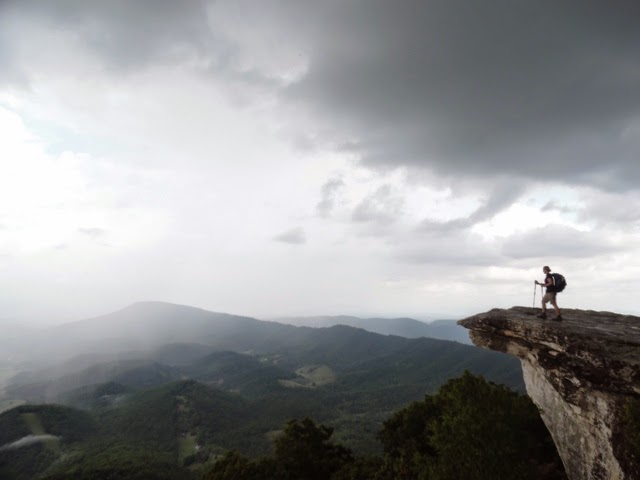 Had to include 1 with my pack on 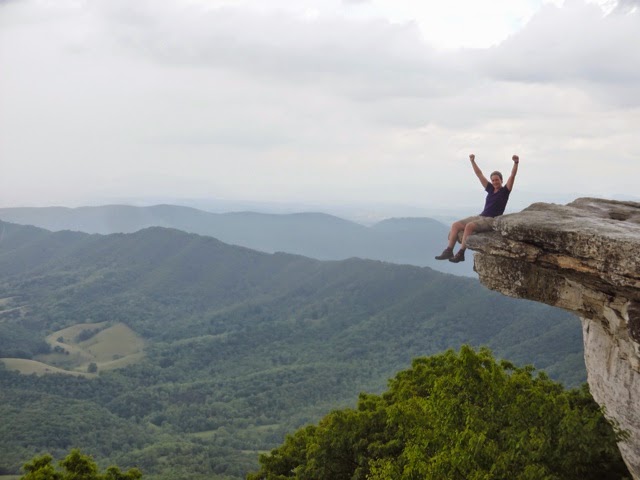 I love this shot 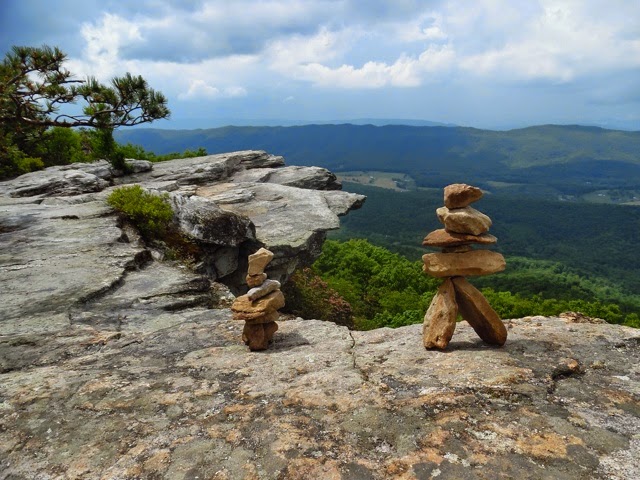 Sweet Cairns somebody built
I have tons more pictures, but I'll have to put them into a slideshow or my blog will never post.
By now it had gotten really late in the afternoon and we hadn't really gone that far, only 11 miles. We had planned to hike 18, so it was time to put the pedal to the metal. We stopped at the next shelter for a snack to fuel us up for the final push. The hike to Tinker Cliffs looked like a hard uphill and it did not disappoint. I made really good time and had only planned on taking a couple of pictures and then pushing on. I didn't think anything could top McAfees Knob. I was wrong, Tinker Cliffs was equally as stunning. I quickly decided to camp right there, even though it is a no camping zone.

Tinker Cliffs
I had such great cell phone reception I face timed with my parents and my best friends, Alie and Kyle. I wanted to share the view with them and it worked perfectly. I watched the sunset and had dinner hanging over the ledge. It was a perfect end to a perfect day! 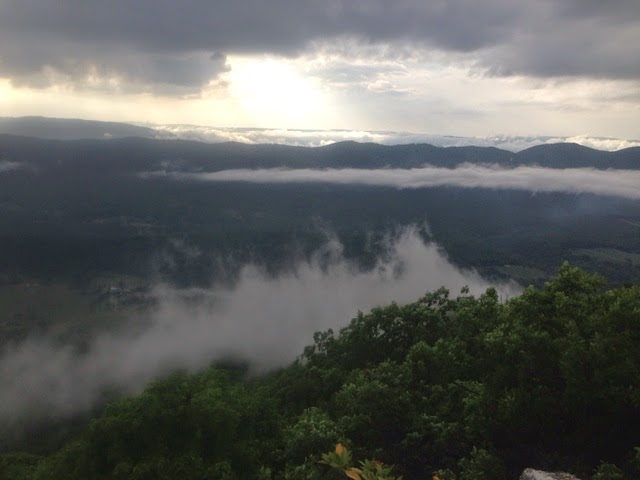 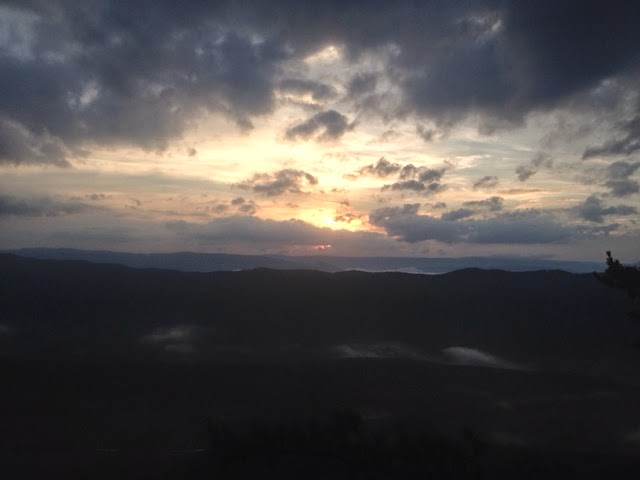 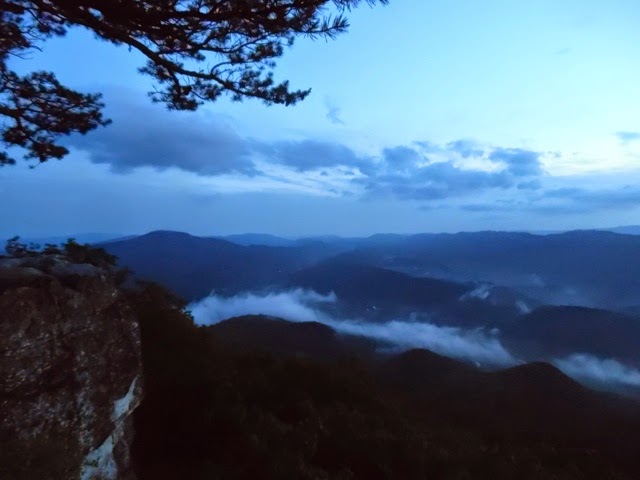 After sunset
It is now ridiculously late and tomorrow will be a very early morning. I hope to make it in to Daleville before the rain starts.
""In 1948, I returned to France at the invitation of French Government. It was still a war-ravaged country ... but this time there was something different. It wasn't the absence of fighting, nor the silence of the big guns, nor the disappearance of uniforms and chow lines ... I didn't know what it was until one morning when I was taken to the grounds of a small French school. The children had been assembled in the play yard. They were grouped close together and arranged in wobbly little rows, their dark heads bobbing around like flower buds on long stems. One of the teachers rapped for silence. The kids quieted immediately and turned their eyes towards her. Their Faces were scrubbed and bright in the sunshine. The teacher raised her arms, and for a moment, there was no sound ... Then the teacher brought her arms down and the kids began to sing ... I Knew why I felt at home. The spirit of freedom was hovering over that play yard as it did all over France at that time. A country was free again. A people had recovered their independence and their children were grateful. They were singing in French, but the melody was freedom and any American could understand that. America, at that moment, never meant more to me ... The true meaning of America, you ask? It's in a Texas rodeo, in a policeman's badge, in the sound of laughing children, in a political rally, in a newspaper... In all these things, and many more, you'll find America. In all these things, you'll find freedom. And freedom is what America means to the world. And to me." - Audie Murphy
"The clearest way into the universe is through a forest wilderness." -John Muir
Posted by Yoda at 8:45 PM