Day 59- The Struggle Is Real 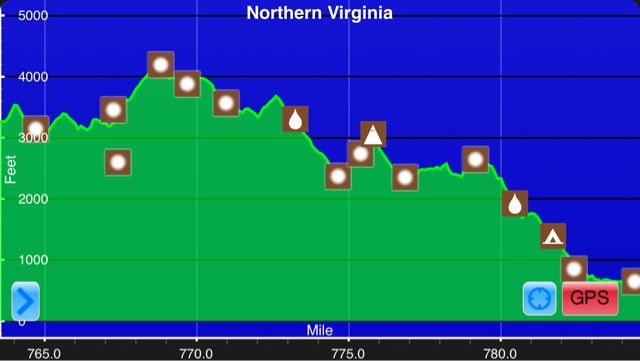 Wow, am I tired. I woke up early this morning and couldn't get back to sleep. I read a little of my book until there was enough light out to get packed up. I retrieved my food bag and had breakfast and coffee in my hammock. I left camp at 6:55, not a record for me, but still one of my earlier starts. The day started off with a well behaved uphill climb. By well behaved I mean it was nicely graded with lots of switchbacks. I even got a nice view from Black Rock Overlook. 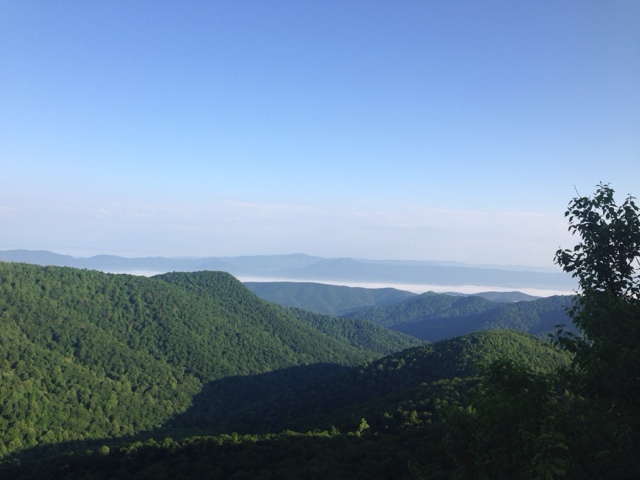 Black Rock was immediately followed by a not so well behaved mountain. Apple Orchard Mountain was very rocky and had several false summits. I was glad to have an early start because it has been very hot and humid lately. Once I finally made it to the top, I had a mediocre view of the valley and a FAA tower. 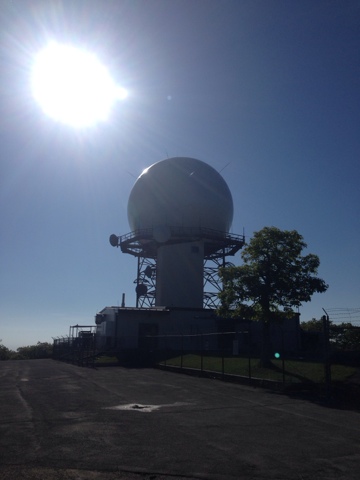 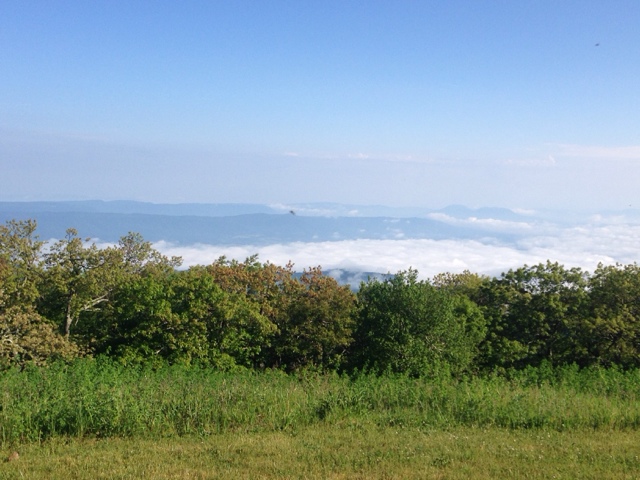 Mediocre View
On the decent from Apple Orchard I walked underneath, The Guillotine, a rock that is stuck in between two huge boulders. 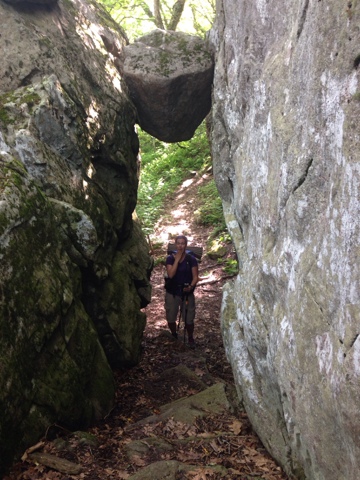 The Guillotine
The next few miles were pretty boring. I walked downhill until I arrived at Thunder Ridge Overlook. The overlook is accessible from the BRP, but you have to park your car and walk on the AT for a little while to see it.

Panoramic of the View from Thunder Ridge
The next hour of my day was an all out struggle against Highcock Knob. It was a very hard and long struggle. I felt like it would never end. Every time I thought I had crested the top, it went uphill again. The worst part was there was no view at the end. 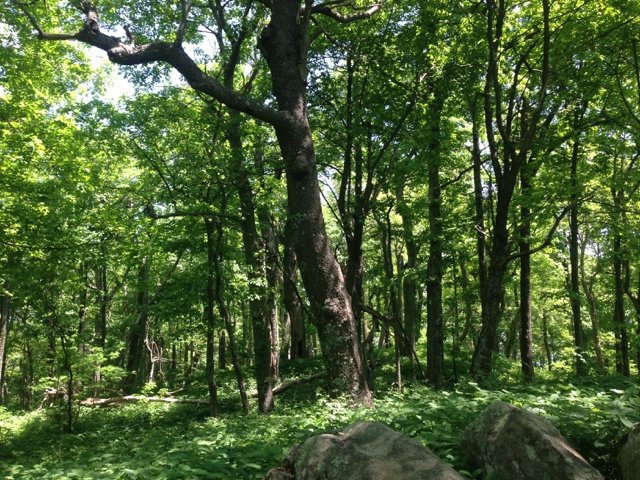 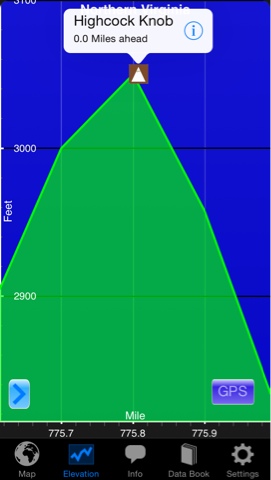 Highcock Knob elevation profile
The next two hours of my trek was all rainbows, unicorns, and puppies. I had a lovely, relatively flat ridge walk, that was very enjoyable. I got glimpses of the mountains from in between the trees. 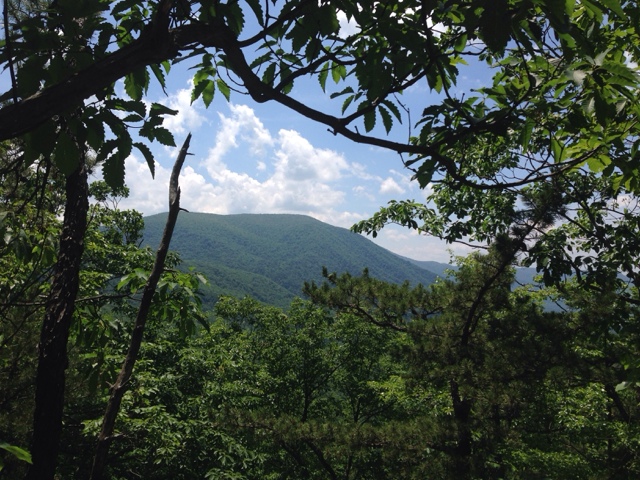 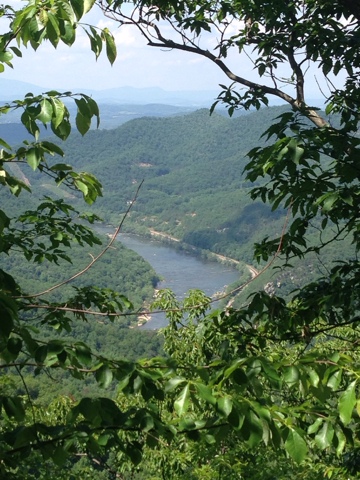 James River
The remainder of the day was spent going downhill, which is also a struggle. It really takes it's toll on your knees and feet. By the time I had gone 18 miles the soles of my feet felt like they had been cained. I could have stayed at a shelter, but I was pushing on another two miles to get to the trail magic that people were talking about. As I came out of the forest towards the James River I could see the parking lot where the magic was going to happen. To cross the river you use the James River Foot bridge. The longest foot-use-only bridge on the AT, at over 1,000' long. The bridge is named after William Foot, a former thru-hiker, and former president of Natural Bridge Appalachian Trail Club. It was pretty neat. 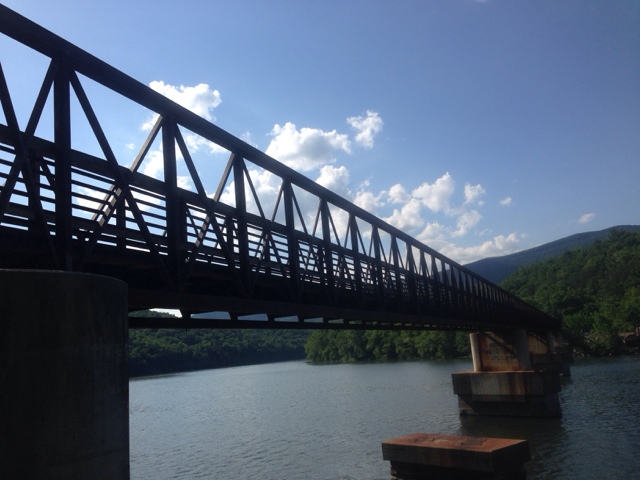 The Foot Bridge
As I neared the magical parking lot I grew concerned. I didn't see any signs of trail magic. I was very disappointed. I did so many miles today because I was positive it would be there. I settled on soaking my feet in the river instead. Later I would find out that public drinking in VA is against the law. The trail magic had been broken up and all the hikers drinking were fined $50 by the US Forest Service. One hiker was even arrested for public intoxication(he was being belligerent to the cops). Once I heard this I wasn't too upset that I missed out. Putt Putt and Tumble caught up to me after the bridge. We stealth camped shortly after the James River together.
Tomorrow promises to be another high mileage and hot day. I'm trying to set myself up as close to town as possible so I can resupply on Monday.
"In the spring, at the end of the day, you should smell like dirt" - Margaret Atwood
Posted by Yoda at 6:33 AM