Day 60- Racking Up The Miles 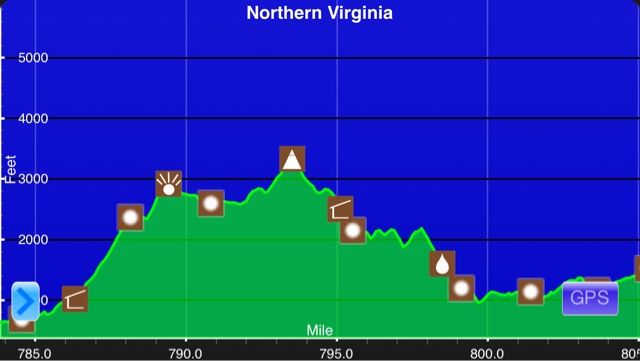 I can't believe how fast today went by. I was out of camp a little before seven. I wanted to get an early start to try and beat the heat and humidity. The day started off with an awful climb. All the elevation I lost yesterday on the way to the river, was gained back with a little bit extra thrown on top. By 7:30, I was drenched in sweat. It has been a long time since I've had so much elevation gain and loss. I feel like I'm back in Georgia again. On the bright side I had some excellent views of the James River and surrounding mountains. 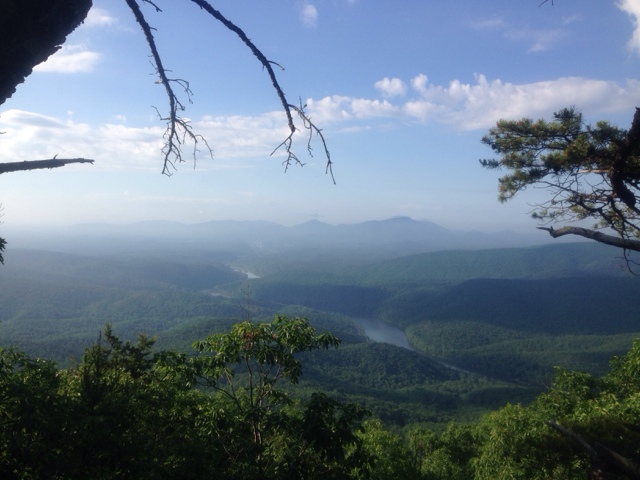 I started off the morning at the same elevation as the river
A few miles later I had to go up and over Bluff Mountain. My legs were pretty sore and tired after the last few days of long miles and drastic elevation change. I had to dig deep to make it to the top. As I neared the summit I came to the Ottie Cline Powell monument. 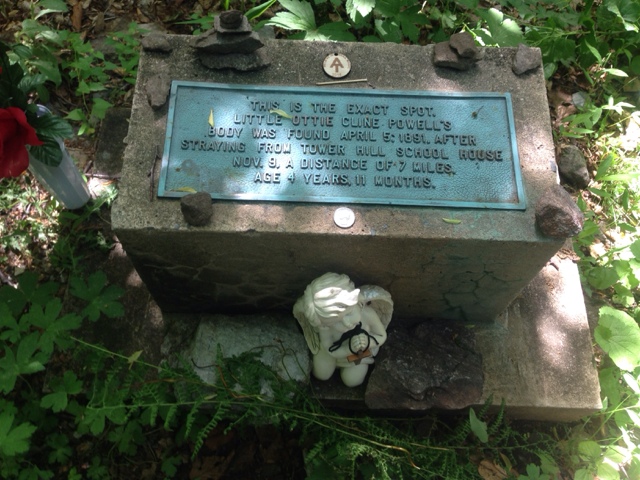 Sad Story
As I was catching my breath and filtering some water I heard someone behind me shout, "I think that's Yoda!" I turned around to see Cyborg and Stealth Bomber coming out of the woods. I haven't seen them since Damascus. They have been a day or two ahead of me for weeks. It was great to have finally caught up to them. We hiked together for most of the day, but they have gotten so much faster. I really struggled to keep up. The next two miles flew by. We finally stopped at a shelter to eat lunch and get more water. We swapped stories and trail rumors during lunch. It was nice to just catch up. After we finished eating we were getting ready to leave the shelter bee heard some loud voices nearby, but didn't think much of it. Just before we got back on the trail we saw, Putt Putt, Tumble, and another hiker just standing around something on the ground. The other hiker very proudly announced that he just killed a rattlesnake. 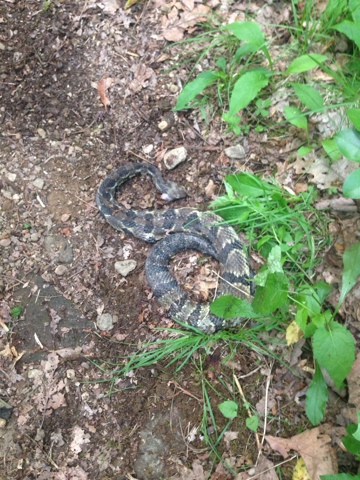 I have no love for rattlesnakes, but I wasn't too happy to hear this guy tell his story. The snake didn't strike at him, or even rattle. They could have walked around it safely. We are in their habitat, I feel we should show the creatures out here some respect. If the snake was in my house or garage, then yes I would probably kill it, but we are in their home. Not to mention that he put himself in more danger trying to kill it.
After that incident we began to put some miles behind us. After a little while I just couldn't keep up with Cyborg and Stealth Bomber. We made plans to meet at the 800 mile mark, which was rapidly approaching. I slowed down to a more comfortable pace and enjoyed the easier terrain. It started to rain a little bit, but nothing severe, just enough to cool me down and make the rocks slippery. Just before the 800 mile mark I came across a river with a cool suspension bridge over it. I'm always amazed by the footbridges and suspension bridges. Volunteers put a lot of money and work into building these for hikers to safely get across water. Thanks to all of the volunteer trail maintainers. 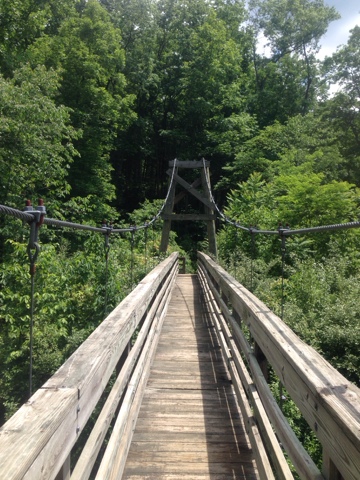 Pedlar River Bridge
From the bridge I only had .4 miles to go. I was anxious to see what the 800 would look like. I think I forgot to mention that I had to make the 700 mile mark. It was in a high volume area, so I'm sure it gets destroyed often. It seems like the mile markers are usually sticks or stones. I tried using pine cones for 700, but quickly gave up. I could only find three pine cones. 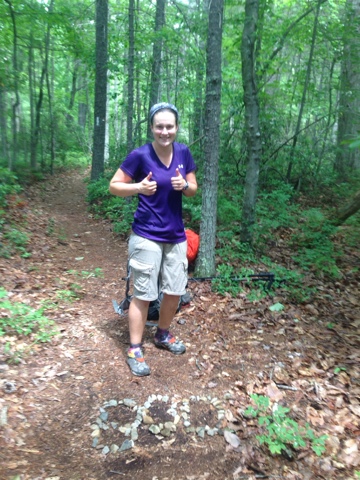 800 Miles Down
The next four miles to the shelter were pretty easy. I put on my audiobook and just zoned out. My feet really start to ache after 16 miles. I'm pretty sure it's time for some new Superfeet insoles for my shoes, but I'd really like to wait until I get to Harpers Ferry. It is the symbolic halfway point of the trail and I'm only 230 miles away.
I'll being going into town first thing tomorrow for a short resupply. Since I have increased my daily mileage, it seems like I can never eat enough food. I'm pretty much always hungry now. I ate everything in my food bag during dinner tonight. I have never gone to town with nothing left. Hopefully I'll get a ride into town easily and can enjoy a nice big breakfast.
"I am convinced that material things can contribute a lot to making one's life pleasant, but, basically, if you do not have very good friends and relatives who matter to you, life will be really empty and sad and material things cease to be important." -David Rockefeller
Posted by Yoda at 6:03 AM