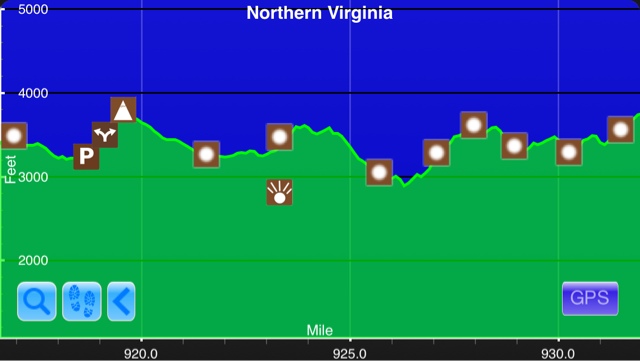 I slept in a very comfortable bed last night. It was hard to make myself get up this morning... until I smelled bacon cooking. I was up pretty quickly after that. Max had cooked up an egg scramble with bacon, sausage, English muffins, fruit, and yogurt. Fiddler, Wizard, Airlock, and I sat down and quickly polished off most of the food. It was delicious. After breakfast I spent a few minutes repacking my things and then helped Max load up some ice chests with beer, Gatorade, and water. We were headed back to the trail by 8:00. Max dropped me off at Bearfence Mtn parking lot and everyone else went back to Bootin Gap, 1.4 miles further down the trail. Airlock and I made plans to meet at Big Meadows Wayside for lunch. 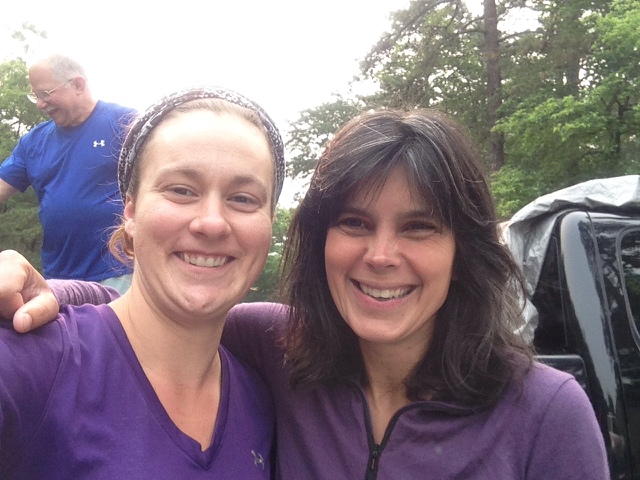 Yoda and Airlock (photobomb by Max)
It was sad to say goodbye to Max. He was a true trail angel and I wish him well.
Max's reason for doing trail magic is a sad story with a happy ending. His youngest son passed away in 2009. Understandably, It was a difficult time for Max and his family. Bring outside in nature was a coping mechanism for him, so he decided to hike the AT in 2010. He took the trail name, Max Factor because his son's name was Max and he was a factor for doing the hike. Max met a guy named, Superman, that had his own sad story. He was engaged to a woman who then died of cancer. As a result he turned to drugs and ended up in prison. Once he was released he decided to hike the AT to work through his pain. The two quickly bonded and hiked together. While going into Fontana Dam, Max fell and tore his quadricep. His hike was over. He stayed in touch with Superman throughout the remainder of his hike. At some point Superman decided to quit and Max offered to help him find a job and a place to live. The two continued to be close friends. Superman eventually returned to his hometown, got married and had a baby girl. They named her after Max, she was born on the anniversary of the day Max had passed away. Superman calls Max his father and the little girl calls him Grandpa. Max Factor does trail magic as a memorial to his son and because he believes in trail relationships. He has an incredible amount of faith in people.
On the way back to the trail I noticed a sign on the interstate for Harrisonburg, VA. I just happen to know a little bit of civil war era history about that town. My great grandfather x3, Frederick Clinton Holmes, was killed in the Battle of Harrisonburg in 1862. Before he was shot he is credited with shooting and killing the Confederate General, Turner Ashby. I did a report on him in grade school and just thought it was neat to go by that town so many years later.
I guess you'd probably like to hear about some hiking now. The day was very strange. We didn't have very many good views because it was so hazy out. We heard the haze is being caused by fires in Canada. 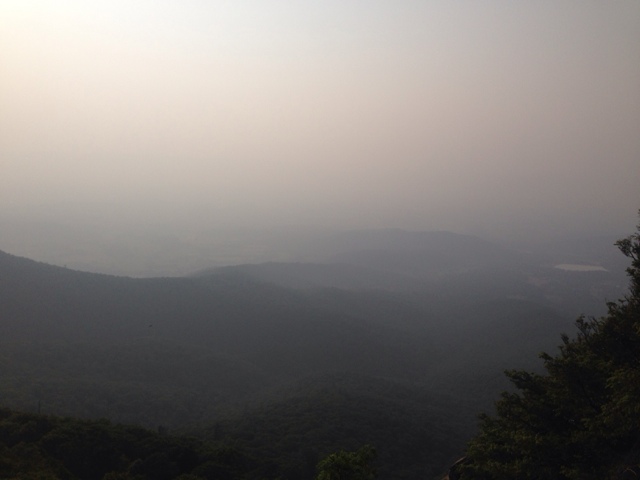 Yup, not much to see
We filled our time by eating at every facility the park had to offer along our route. Our first stop was an early lunch at the Big Meadows Wayside. It was amazing. I had a cheeseburger, fries, and a blackberry milkshake. Delicious. We lounged around outside chatting with other hikers. After such a big lunch we were in no hurry to move on. We slowly started hiking north with zero sense of urgency. Our next stop, 9 miles later, was another restaurant. We grabbed an iced latte and sat outside of Skyland resort. It was very pleasant out. We chatted with a wide variety of other thru-hikers. Since it was so nice out we decided to have dinner on the patio. We ordered food from the bar and took it outside. We didn't get back on the trail until after 6:00. We hiked for a few miles until we found a stealth site. It was the first time I have hiked a full day without eating a single item from my food bag. My bag actually got heavier since I added mustard, mayo, and sugar packets to it. I wasn't too pleased to carry the weight of uneaten food, but I was ecstatic to have 2 burgers, a milkshake, a latte, soda, and Gatorade. Overall, I was pleased to have freshly prepared food over cooking my usual camp meals. Tomorrow we will come to the last Wayside in the park. No more milkshakes and cheeseburgers for lunch :-( 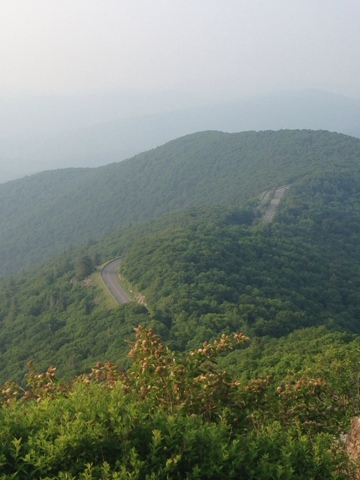 Hazy view of Skyline Drive
"A merry companion is as good as a wagon."  -John Lyly
Posted by Yoda at 6:12 AM