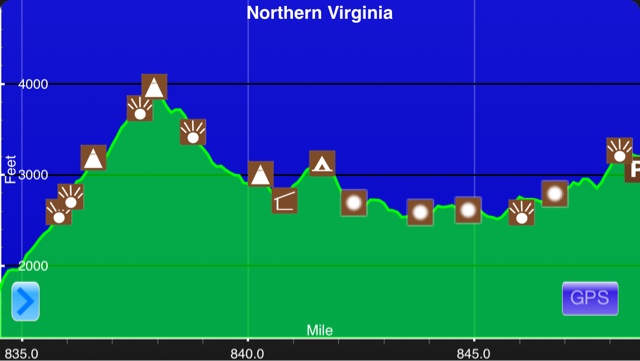 What started out as a horrible day, ended as a great day. It rained all night long and continued raining all day today. I reluctantly forced myself out of my hammock this morning and started packing up. I even skipped my morning coffee. I had six hours to hike 12.7 miles. Usually, this would not be a problem, but with two days of rain the trail was downright dangerous. I knew I was in for a difficult start to the hike. The first three miles were uphill and supposed to be quite difficult. Three Ridges Mountain lived up to the hype. What the locals forgot to mention was the rocky, slippery, boulder-filled terrain. 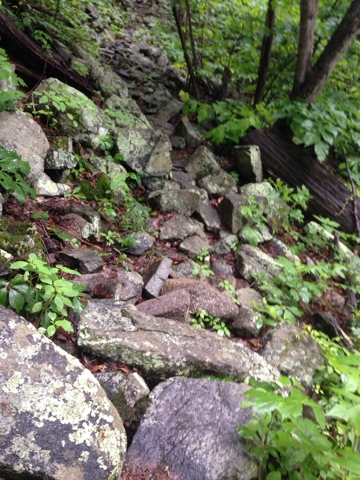 12.7 miles of this
It was absolutely insane. I felt like everything was conspiring against me today. The rain, the rocks, and the temperature dropped into the 40's. I couldn't have imagined worse weather to transverse this section in.
I did, however, have more motivation than all the other hikers around me today. I had my mom and dad waiting with clean clothes, soda, brownies, and a heated car! As I neared the end of my hike I was practically running down the trail. I could hear cars in the distance so I thought I was close to the end. As I came around a corner, I saw my mom standing at the top of the final uphill climb. I had finally come to the end of a tough day. Since I was soaking wet and smelled like road kill, no hugs were given or received. Before I knew it, mom had cookies, muffins, and a soda shoved into my cold and frozen hands. I sat down on the curb to take off my filthy socks and shoes. She then gave me a basin of water and a washcloth so I could get cleaned up. I was so focused on eating and drinking too notice the ghetto bath she was preparing. I stood up to get another cookie and she threw the water on me. I had been in the rain for seven hours and couldn't believe my own mother would throw water on me. To be fair, I was covered in mud from the knees down.
Shortly after my sponge bath, Cyborg and Stealth Bomber came out of the woods. They also looked like drowned rats. Mom quickly jumped into action and before they knew what was happening they had sodas, cookies, and brownies too. I think Dad was impressed by how much food was eaten in a matter of minutes.
Mom and Dad had planned on doing trail magic, but with the horrible weather it would have to wait until another day.
We headed into the town of Waynesboro, VA. The first order of business was a shower for me, while my mom did my laundry. They even brought me some of mt regular clothes to wear. It's the first time in two months I've worn a different set of clothes. After showering I set all my gear out to dry and we made plans for the rest of the night. I was very clear on what I needed to get done while in town; eat, outfitter, and eat. We went to subway for a snack, I had a footlong sub. Then to the local outfitter for some new Superfeet Insoles, which they didn't carry. I spent a little while browsing the store, but didn't see anything I had to have. After that we went to a drugstore to get some things to treat my feet with. Due to all of the recent rain by feet are a mess again. Then it was off to dinner. Mom and Dad treated me to Outback Steakhouse. I had a salad, 9 oz sirloin, Mac&Chz, and a piece of cheesecake(this was 2 hrs after subway).
Town days go by way too fast. I'm thinking about taking a zero here tomorrow. I still have a lot of things that need to be taken care of and my feet could use a day to rest. It's been close to 400 miles since my last zero day.
"One of the greatest titles in the world is parent, and one of the biggest blessings in the world is to have parents to call mom and dad." -Jim DeMint
Posted by Yoda at 9:25 PM