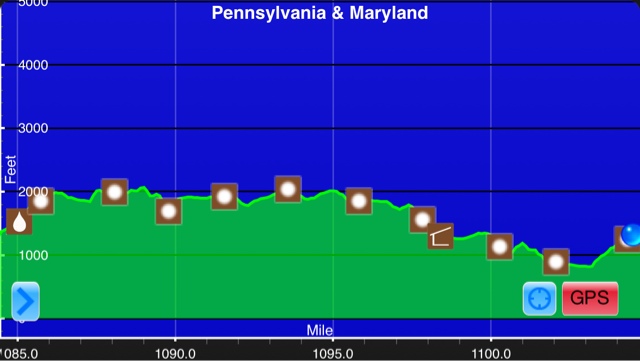 I like days with achievements and today was chalk full of them. We got a good deal of rain overnight, which meant another day of sloppy trail. I was up at my normal time, but it took my slightly longer than normal to leave camp. I had my hammock hung .1 miles north of the shelter, which meant that I had to walk .2 miles to get my food bag and return to my hammock. Instead of heating water up for oatmeal, I ate it cold. It was actually pretty good like that. After breakfast I packed my bag and hit the trail at 7:30. I was full of excitement all morning. Today was the day that I officially crossed the halfway point at 1,094.6. I had about 10 miles to hike to get there and I was moving right along. I spent the morning flip-flopping with, Tree Beard, Burl, Little Free Bird, Mia, Clover, and M&M. It was a nice easy hike except for the muddy sections. I did my best to keep my feet clean and dry, but I did step in a few big puddles. Every time my shoes would dry out, I stepped on one. The morning went by so quickly that I was surprised when I heard, Little Free Bird call out in joy. I have officially hit the halfway point. I have taken approximately 2.5 million steps in 82 days and walked one thousand and ninety four point two miles. 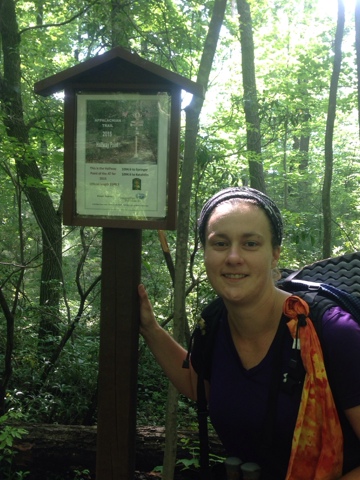 The sign was pretty unremarkable
I was disappointed with the sign. I thought it would be more grandiose. The official halfway point was at a road called, Dead Woman's Hollow. I'm guessing that at some point in history a woman was found dead at this location, but it didn't have a name so from that point on they called it, Dead Woman's Hollow. 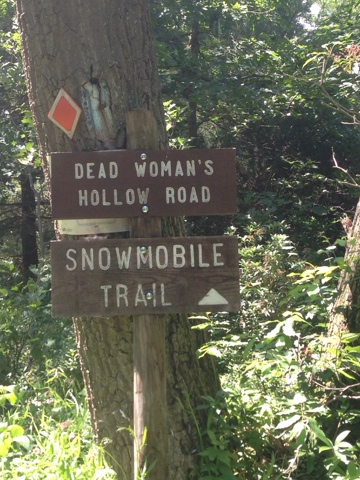 Better sign than the halfway point
I decided that this would be a good point to stop and have an early lunch. I didn't want to eat lunch too late in the day because I was going to a state park later in the day.
Shortly after lunch I caught back up with Tree Beard and Burl. They showed me how to recognize blueberry bushes. They are starting to produce berries now and for the next two weeks we should be able to pick them. 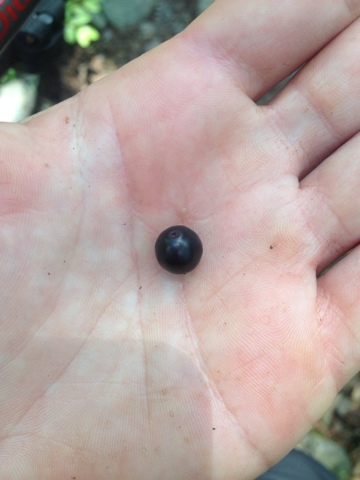 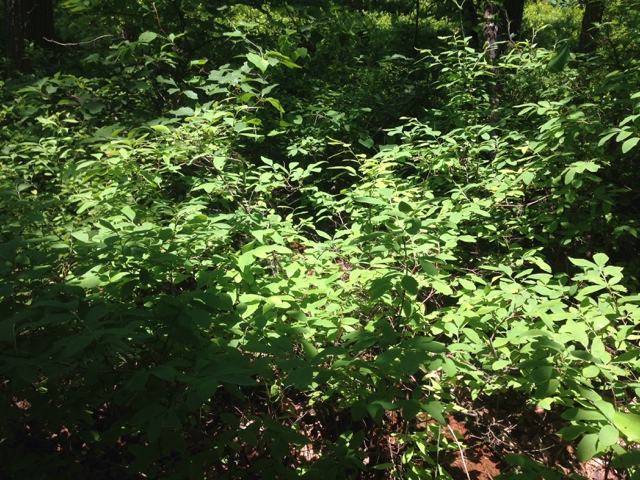 Blueberry Bush
I spent the next part of the afternoon focused on making it to the 1,100 mile point. I was walking so fast that I almost missed this.... 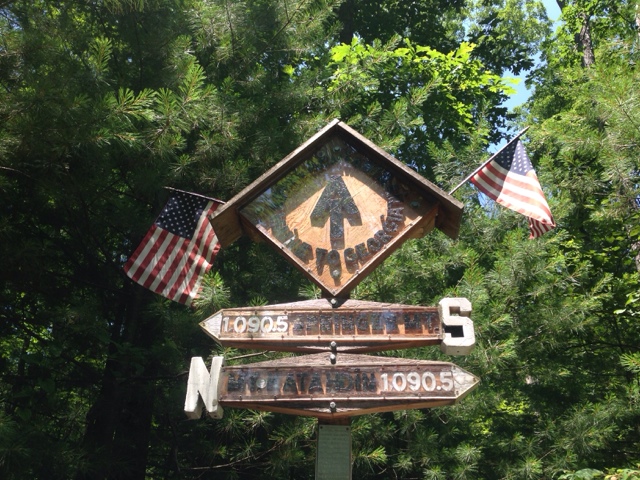 Official Halfway Point Sign
The trail mileage changes every season due to reroutes. It not logical to move the sign every year, so the ATC puts a picture of the sign at the official halfway point and this sign stays in the same place(4 miles further down the trail this year). If you look closely at my first picture you can see this sign in it.
From there it was only one and a half miles to the 1,100 mile marker. I was excited to see what it would be today, but was disappointed and excited to see there wasn't one. I like making them, but it is time consuming and I wanted to get to Pine Furnace Grove SP at a decent time. There was nobody around to take my picture with it and I couldn't get it in a selfie
Once the mile marker was made I hurried as fast as my tired legs would carry me. Pine Furnace Grove SP is home of the half gallon ice cream challenge. It is tradition for thru-hikers to participate. I went with, cookies and cream ice cream. My favorite is mint chocolate chip, but I thought that might get old after a pint or two. I managed to eat it all in 22 minutes. All 1,920 calories of ice cream didn't stand a chance. 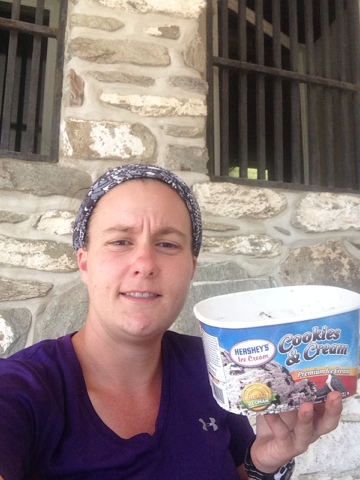 I think I need a nap 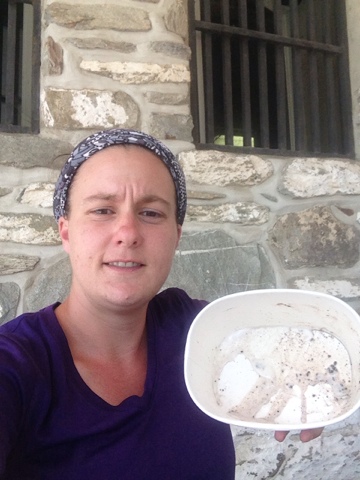 Gone
PFGSP has a lake with free swimming. After binging on ice cream I sat around for 30 minutes. My tummy was a little queasy. Eventually I moved on down to the lake. I decided to go swimming in my running shorts and sports bra, it was like a bath and shower all in one. The water was ice cold and refreshing. 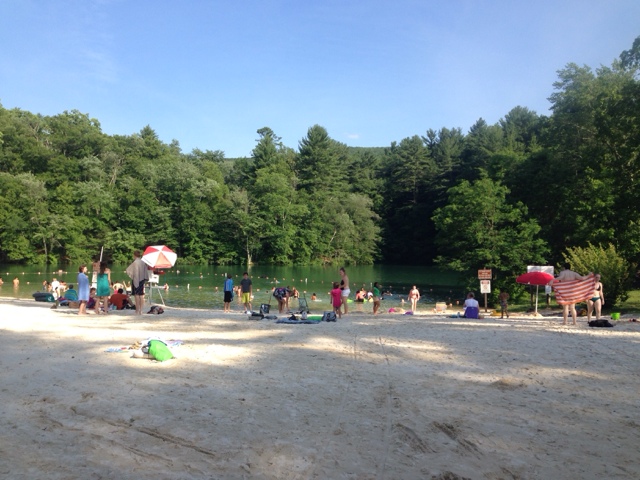 Lake with a beach
Laces, Mia, Clover, M&M, and I walked another couple of miles to a sweet camp site just off of the trail. We cooked a small dinner and hung out for awhile before bed. I've known them for a while, but we have never camped so closely to one another. We took this chance to examine each other's gear. It's nice having a dog in camp, we played fetch for awhile during dinner and in not worried about bears tonight. Tomorrow, due to camping restrictions around Boiling Springs, PA, we have a short 14 mile day. I'm going to take my time hiking so I don't get to camp at 2:00.
"The best remedy for those who are afraid, lonely or unhappy is to go outside, somewhere where they can be quite alone with the heavens, nature and God. Because only then does one feel that all is as it should be and that God wishes to see people happy, amidst the simple beauty of nature. As longs as this exists, and it certainly always will, I know that then there will always be comfort for every sorrow, whatever the circumstances may be. And I firmly believe that nature brings solace in all troubles." -Anne Frank
Posted by Yoda at 5:49 AM