Day 90- We Have A Love/Hate Relationship 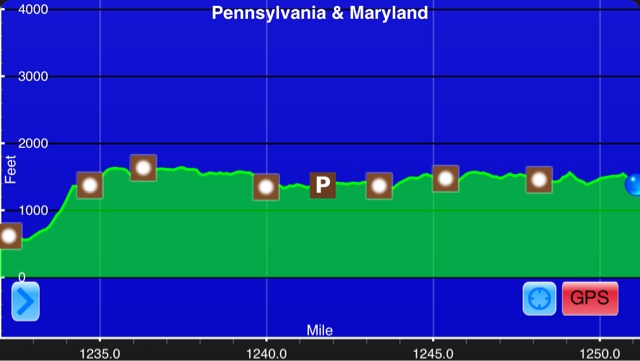 Let me begin by saying how much I love being out here. This is the opportunity of a lifetime and I'm greatful each and every day that I get to experience such amazing things. With that being said, not everyday can be great. The last few days have been very taxing. Pennsylvania is kicking my butt.
Today started off very normal. I was awake by six and started packing up my things around six thirty. I was able to take my time and enjoy the luxuries of last nights shelter. I used the flush toilet, filled up my water bottles from the tap, and threw away all of my garbage. There was even electricity to charge my phone and external battery. 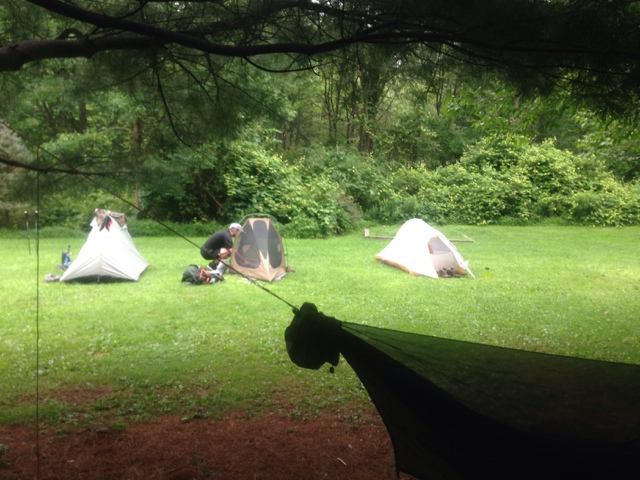 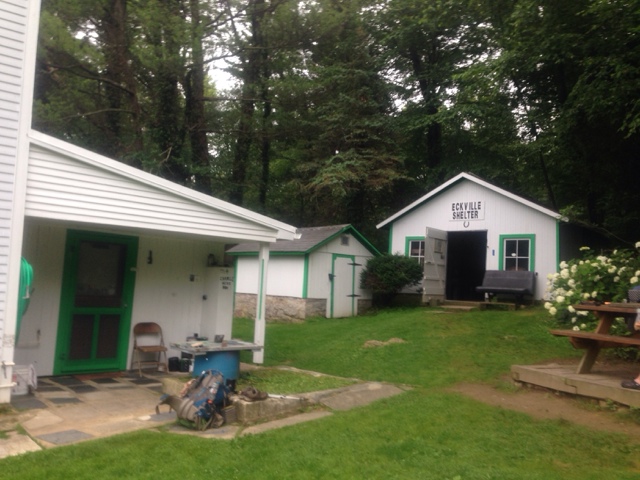 Caretakers house and Bunkroom
Due to all of the luxuries offered, I didn't hit the trail until almost 8:00. The beginning part of my hike started off with a pretty decent climb, 1,000 feet of elevation over 1.5 miles. The sky was overcast so it wasn't too bad of a climb. The weather forcast called for thunderstorms after 4:00, but since I was only hiking 17 miles I thought I'd be done before they started. Just as I got to the top of the hill I heard thunder. I went to Dan's pulpit overlook and the sky looked angry. 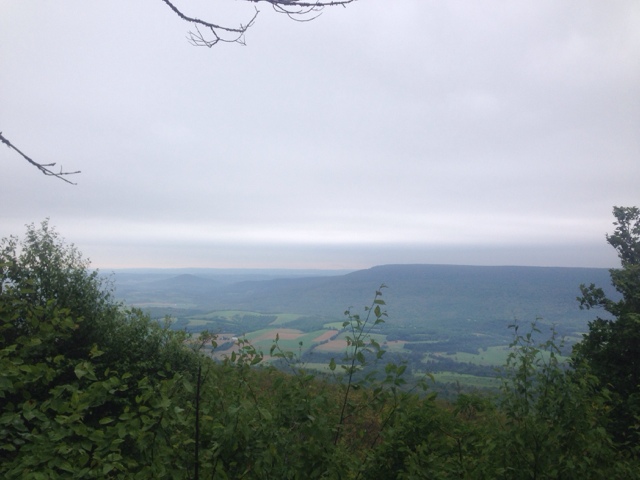 Dan's Pulpit
I got my phone out and lo and behold, I had service. I published my blog post from last night and checked the weather radar. A severe line of storms was rapidly approaching. There was a shelter 4.4 miles away, so I picked up the pace to make it there before the storm hit. I made it half a mile before I hit a huge field of Pennsylvania flowers. With boulders that large there is no going fast. I slowed way down and the sky began to turn dark. As I climbed up a pile of boulders, I was reminded of Newtons laws of gravity, What goes up, must come down. Climbing up big boulders is much easier and safer than climbing down. At one point I had to sit down and slide to the next rock below me. As I cleared the boulder field, the rain started. It was a light rain that the forest canopy caught most of. I made it to the shelter without incident and five minutes later the rain became heavy.
Since I wasn't in a hurry today and only had ten miles left, I had a long lunch break. I checked the radar once more before I left and didn't see anything. The next four miles of trail were amazing. It was very flat and hardly any rocks, I banged out 4 miles in one hour. 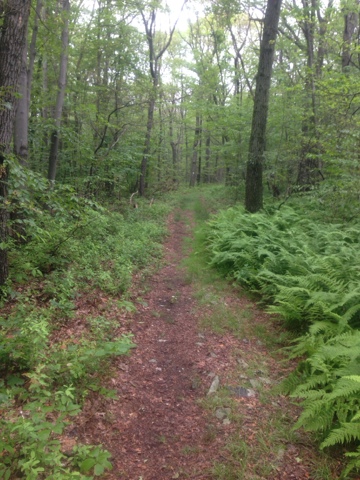 Pennsylvania loves me again
That was the last flat, rock free trail I would see all day. The next six miles to, Bake Oven Knob Shelter, were some of the worst miles I've ever done. The rain started back up just as I hit an enormous boulder field. Rocks are hard enough when they aren't slick from rain. I carefully picked my way through without incident, but now I was pretty wet. 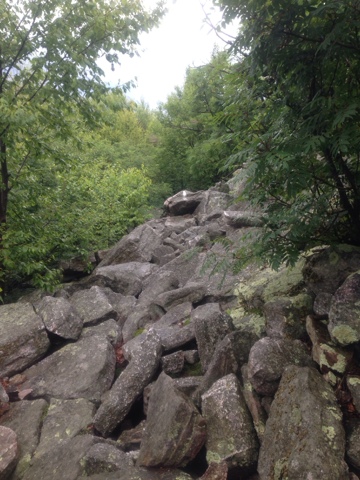 Pennsylvania loves me not
The farther north I walked the harder it rained. Just as I reached an area called, Knife Edge, the wind picked up and the lightning started. It was raining so hard that it actually hurt. I had a moments hesitation about proceeding forward, but I couldn't go back and I couldn't just stand around, it was too cold for that. I took a deep breath and pushed on. What I saw next had me pretty unnerved. The Knife Edge, is a section of trail described by Guthook as, "tricky rock scrambling". I described it as bowel-shaking earthquakes of fear and terror. 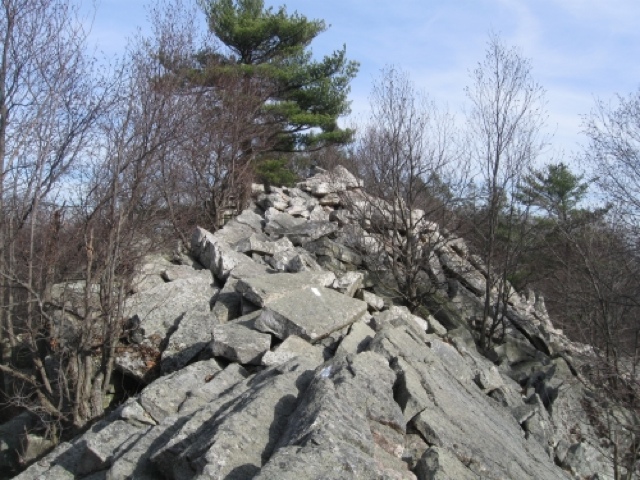 Borrowed from the internet.
It was raining too much for me to get a picture. The trail is the top ledge. If you look carefully you can see the white blaze on a rock.
This went on for over .2 miles. I'm not sure how I made it across without slipping, but I did. Probably had something to do with the fact that I sat and crawled for most of it. By the end, I wouldn't have been anymore wet if I jumped in a pool. I wish I could say that the rest of the day was all rainbows, butterflies, and unicorns, but I can't. It was more of the knife edge type of terrain, but not as severe. The sad thing is that I can appreciate how much fun that would have been on a nice sunny day.
The thunderstorms came and went for the remainder of the day. I made it to the shelter nice and early. I was looking forward to putting on dry clothes and getting warm, but it was going to have to wait. Baked Oven Knob Shelter was a dump. There was graffiti everywhere and it had a weird vibe. I grabbed some water from the water source there and pushed on. Between the rocks and  being constantly wet over the last three days, my feet were really sore. Another campsite was listed at 1.5 miles away and I pressed on the best I could. The thunder and lightning started back up as I left the shelter. The rocks remained constant, but at least they were the small and jagged variety. I can muscle past those.
Just before the sky opened up again, I found a usable campsite. I set up my tarp and hammock in record time. As soon as that was done I stripped off all of my soaking wet clothes and got into my sleeping bag. I was chilled through and through, but I warmed up quickly in my bag.
Tomorrow will be a better day. My brother and his family are driving in from Philly to meet me in Palmerton. My nieces, age 5, are very excited to do trail magic. I'm very excited to see them and to help pass out trail magic. We will be setup right before Lehigh Gap, one of the toughest sections of the entire trail. Hopefully we can fuel up a lot of hikers before the fun starts.
"Stand up to your obstacles and do something about them. You will find that they haven't half the strength you think they have." -Norman Vincent Peale
Posted by Yoda at 8:07 PM