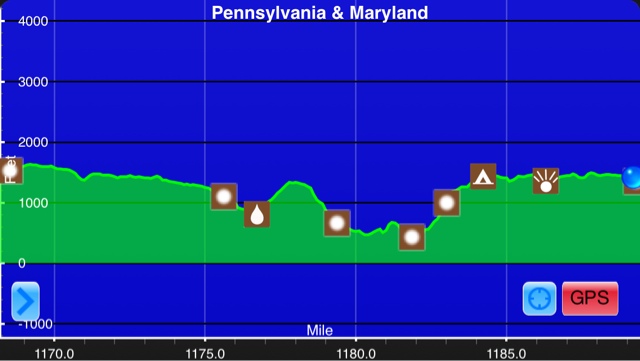 My day started off exactly how it ended yesterday, with light rain. I rolled over and went back to sleep for 30 minutes. When I woke up at 6:30 the rain had stopped and I quickly set about tearing down camp. I ate a quick breakfast and was on the trail by 7:30. All of the rain did not improve trail conditions. I did, however, discover a use for all of the rocks, they allowed me to hop on them to avoid the mud and puddles. 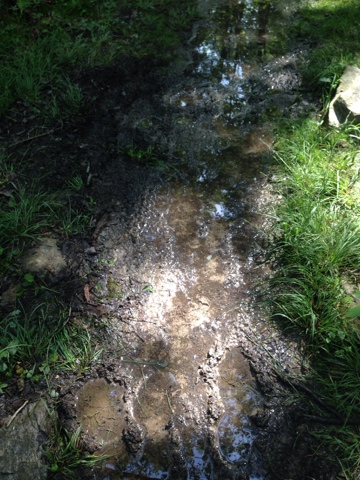 Typical trail today
Walking through this type of terrain is mentally exhausting. Usually I kind of zone out while I hike, going into autopilot mode. Across this muddy sloppy stuff I have to plan every single step. I was pleased that I was able to keep my feet clean and dry all day, but every mile felt like two.
A few miles into my morning I came across an old mining village. Not much was left to mark the site, but I still found it interesting. 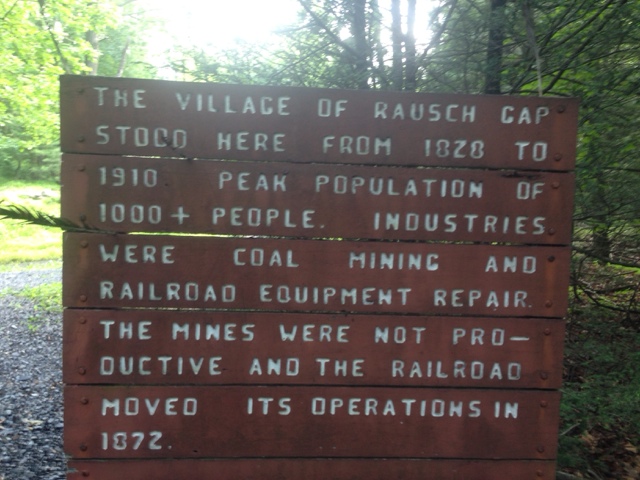 Not long after passing through this area the terrain changed drastically. I entered into a pine forest area, which is my favorite type of terrain. I started to pick up my pace a little. I was fiddling with my hip belt pocket when I looked up to see a huge bear standing on the trail about ten feet from me. I actually gasped when I saw her, she was enormous and very close. 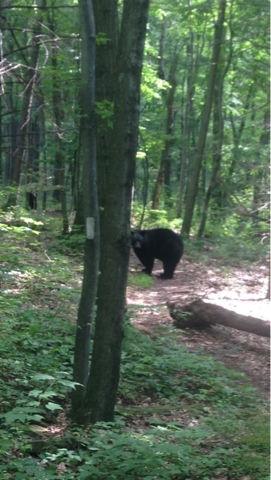 Momma bear and cub(in background on the left)
I calmly asked her to move away and she just stared at me. I made myself big and said, "move along bear". The cub moved away and she moved back about ten yards, but was still on the trail. At this point I took a picture and then slowly backed up. I kept talking to her and banged my poles together, the cub finally ran away and she slowly moved off the trail in my direction but farther away. I took a great video of her moving away. As I went to turn the video off I saw the second bear, an even bigger male had appeared from nowhere. I was a little more concerned so I stopped messing around with pictures and kept banging my poles together until they were out of site. I waited a few minutes and then proceeded down the trail. The whole encounter was really neat. I never felt like I was in any danger, just a really close up encounter.
As I finished climbing up the mountain I heard more rustling in the woods. Out of the trees in front of me burst two ............
people. The female said, "You're Yoda." To which I replied, "Yes, I am". It turns out that they follow my blog and were out doing a weekend hike in the same area. I told them about the bears. They told me they had been following the bear prints in the mud for awhile. We talked briefly and I continued on. It was pretty cool to be recognized out on the trail. I felt famous, not like Angelina Jolie famous, but maybe reality tv famous, or jumbotron at the ballpark famous. I'm still surprised everyday that people other than my friends and family read this. 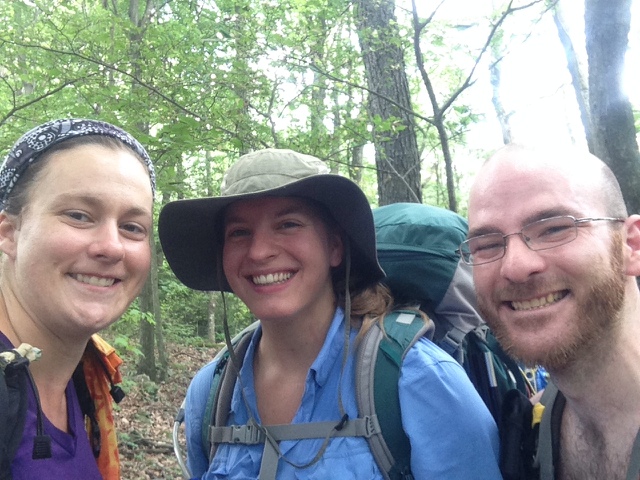 Jessica and Kyle (I hope you guys had a nice hike)
It was cool to see the bear prints. It looked like they had walked on the AT for more than half a mile. I was fairly certain that there were no bears in this area. We are so close to roads all of the time that I didn't think they would be around, boy was I wrong. 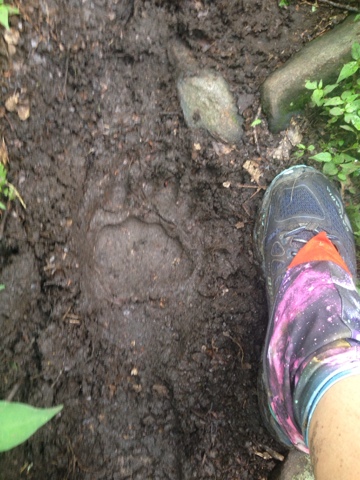 Bear paw prints
These two encounters changed my entire day. I had a pep in my step, and even the rocky terrain couldn't keep me down. I stooped and ate lunch in the pine forest. I'm not sure why that's my favorite terrain, but I just love it.
A few miles after lunch I came to PA 443, two interesting things happen here. First, I noticed the sign to Ft. Indiantown Gap Reservation. This is where my grandfather was discharged from military service after WW II. My grandmother drove down to pick him up and twelve days later they got married. It was neat to see some of my family history close up. 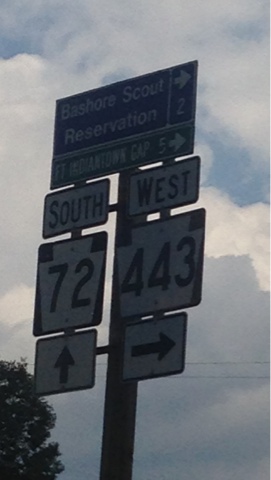 Fort Indiantiwn Gap Reservation
The second thing that happened was trail magic. Former thru-hiker, Ernie and his wife, SOS, along with two friends were set up along the side of the road. They had snacks, sodas, and freshly grilled hamburgers. We chatted and I had second lunch. It was very much appreciated. Ernie thru-hiked in 2007 to celebrate his 65th birthday. He is planning on doing it again for his 75th.
I spent the rest of the day hiking with China Rock. She should change her trail name to China Rocket. I just about killed myself trying to keep up with her on the uphill climb. We chatted back and forth for a few hours, it really made the miles go by fast. 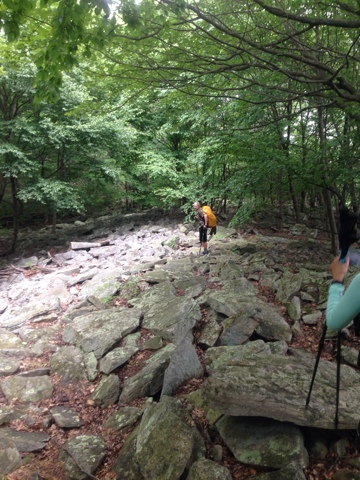 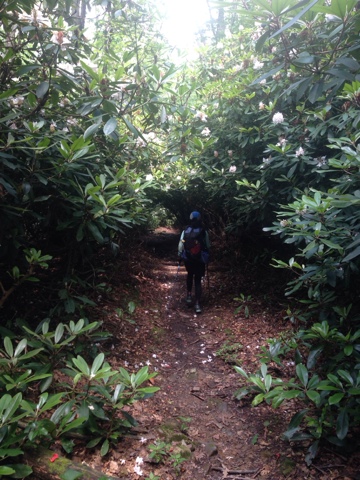 Green tunnel with Rhododendron blooming
I stopped to make camp for the night next to the shelter, while she hiked on another 2 miles. She had a friend meeting her at the road into town. Tomorrow is supposed to be 100% chance of rain, with some severe storms mixed in. I had already planned on taking a nero in Pine Grove, PA so the weather won't affect me. China Rock and her friend agreed to pick me up in the morning and drive me into town. I'm glad I don't have to try and hitch hike in the rain.
I'm camped tonight next to the shelter. South Paw, Putt- Putt, and Tumble
are here as well. I'm really excited to be missing the bad weather tomorrow. For some reason most of the other hikers in my bubble are staying on the trail, but I don't see why.
"Let a man walk ten miles steadily on a hot summer's day along a dusty English road, and he will soon discover why beer was invented." -Gilbert K. Chesterton
Posted by Yoda at 8:52 PM