Day 88- Trekking Through A Swamp 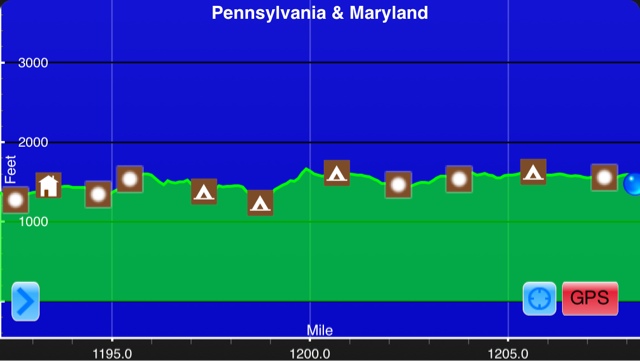 After a very good nights rest last night it was tough to get out of bed this morning. I finally dragged myself out of the room at 6:45. My only motivation was the hotels continental breakfast. I made myself a Belgium waffle, cereal, a few pastries, and a large cup of coffee. After scarfing everything down as quickly as possible I headed back to the room to get packed up. By 8:30, South Paw, Griffin, and I were standing by the side of the road with our thumbs out. Numerous cars whizzed by without slowing. We received several confused or dirty looks by the drivers and passengers. After 15 minutes we began discussing paying for a shuttle back to the trailhead. Just as we were about to make the call we heard a man call out to us from across the street. He asked where we were headed and we told him PA 645, he offered to take us halfway since he was heading that way. We hurriedly crossed the street and thanked him profusely. A few minutes later we were once again on the side of the road. We were three miles closer to our final destination though. Just as we were preparing to stick out our thumbs out again, a car pulled over and offered us a ride. I couldn't believe our luck, an unsolicited ride!!!
The gentleman that picked us up was from Reading, PA, who was going out for a day hike. He had done sections of the AT and was very friendly. He drove us the final three miles to the trailhead. As we got our packs out of the trunk and thanked him, I knew we had a problem. He dropped us off at the wrong place. He had taken us to the PA 501 trailhead. This was good news for Griffin because he had gotten off there, but for South Paw and I, this was bad. We had just skipped two miles of trail. I consider myself a trail purist so I only had two options, walk back to my original starting point, or hitch hike back. As I considered my options a shuttle driver pulled into the parking area. I asked her for a ride back to PA 645. She agreed to take us there, but it would cost $10. In the end, I gladly paid her the money. I have walked over 1,100 miles without missing a single white blaze, I wasn't going to start now. So much for not paying for a shuttle. Oh well, hitch hiking is kind of fun.
Once I was back on track the fun really began. Have I mentioned how much I love wet rocks and mud? Let's just say that I didn't hike the trail today, I slipped and slid down the trail. I thought I was in for an easy day of ridge walking, but the reality was I hopped, skipped, and jumped over rocks, puddles, and mud. Just when I thought that things couldn't get any worse, they did.
I came up on two bedraggled looking day hikers. They informed me that I was getting ready to hate life. According to them the next two miles of trail was under ankle deep water. I just smiled and thanked them for the info. I sort of dismissed their advice, thinking that I am such a hiking badass I could avoid whatever was coming. For the first half mile, I bobbed and weaved myself around all obstacles. Then I had a series of missteps and half falls that left my feet soaking wet. Eventually I came to a section of trail that was 100% under water and unavoidable. Since my feet were already wet I decided the day hikers were right and just waded into the water. 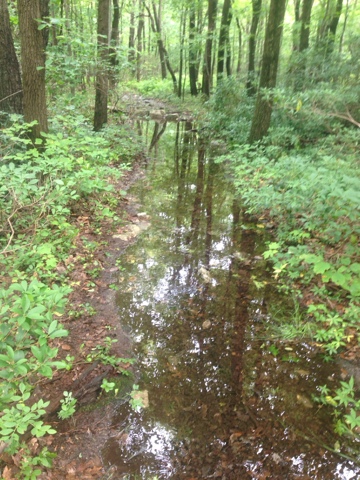 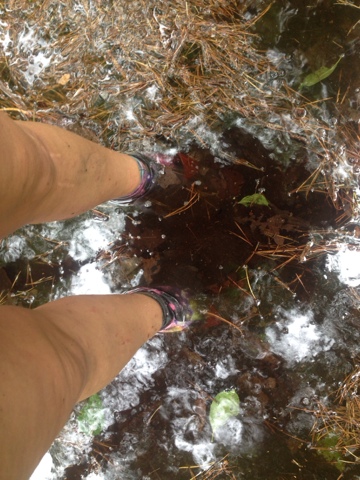 Ankle deep water. Later it would be just below the knee
This continued on for two miles. By the time I finally returned to solid ground I couldn't feel my feet. The water temperature had to of been in the 50's. I was so consumed by my misery that I almost missed the 1,200 mile mark. Well, truth be told, I did miss it by .2 miles. I found a semi-dry patch of trail and made the marker and quickly hurried on. 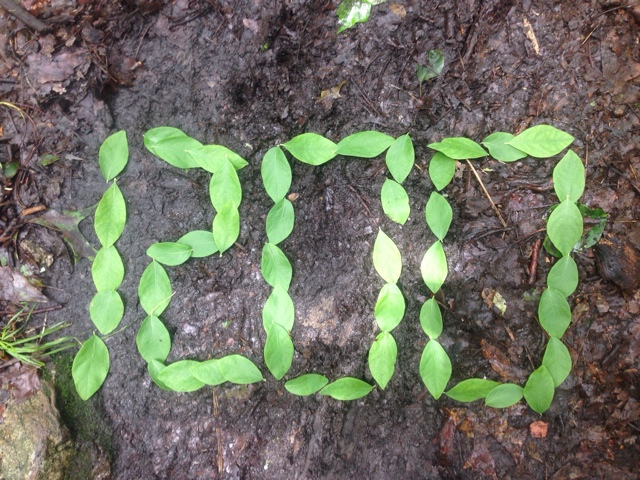 Less than 1,000 to go
I know that from here on out the rocks will only get worse, but I hope the weather will improve. It feels more like fall than summer. The high today was only 62, but with the clouds and wind it felt much colder. The low tonight is in the 50's again. As a Florida girl, I'm shocked by this. I not looking forward to putting on wet shoes and socks in the morning.
The only highlight of today is who I'm camped with. A lot of my trail friends are here tonight! China Rock, South Paw, Adios, and Rusty made it to the shelter after me. They all came in one at a time and I got a kick out of hearing, "Hey, it's Yoda" four different times. If only Airlock, Outro, Stealth Bomber, and Cyborg were here.
I'm hoping for a miracle tomorrow, but deep down I know that the trail won't drain over night. I ate a good amount from my very full food bag, so at least my pack will be lighter. Usually, in the summer Pennsylvania has a lot of unreliable water sources. At least I won't go thirsty any time soon.
"Some people walk in the rain, others just get wet." -Roger Miller
Posted by Yoda at 8:19 PM