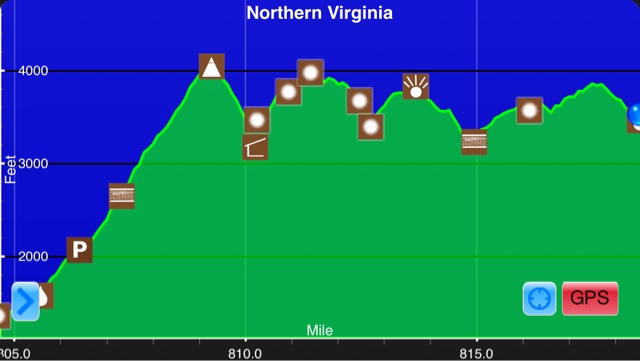 Since I was going into town to resupply this morning, and I was only 1.8 miles from the road, I slept in until 6:30. I didn't want to get to US 60 too early. The thought of standing by the side of a "busy" road before the sun was fully up didn't sound like a good idea. I waited for Cyborg and Stealth Bomber to get up so I could pack out their trash for them. Throwing away our trash along the trail is one of the simple things we get pleasure out of out here. I didn't have anything left to eat and I went without my morning coffee. I figured it was motivation for getting to town faster. I left camp at 7:30 and made it to the road at 8:15. I picked out a safe spot, took my pack off, and stuck out my thumb. Most of the traffic was going in the opposite direction from what I needed. Finally a few cars went past, but none of them stopped. This is my first time hitching by myself for the entire trip. I was a little nervous and was quickly discouraged. Walking to town was not an option, it was almost 10 miles away. I reminded myself that not everyone would stop to pick a stranger up from the side of the road. After twenty minutes and fifteen cars whizzing past I was getting really anxious. Finally a white pickup truck came flying past. I didn't think it was going to stop, but then he slammed on the brakes and backed up. I casually checked out the truck and driver. It was a company car with an older white gentleman behind the wheel. I walked up to the passenger door and asked if I could get a ride into Buena Vista. He said it wouldn't be a problem, so I threw my pack and poles in the bed of the truck and hopped in. As we were making small talk he asked if I was hiking alone. I lied and said my friends were already in town. I also told him I was meeting my parents the next day. I was probably being over cautious, but I wanted him to know that if anything happened to me I would immediately be missed. He ended up being a really nice, blue collar kind of guy. He took me to town and dropped me off exactly where I needed to be. He even offered to pick me up later in the day and return me to the trail. I politely declined his offer because I hoped to get my errands done quickly and be back after a few hours.
The first thing I did was get breakfast. Buena Vista is a small town with a population of 6,600. My breakfast choices were limited to a gas station Burger King or a Hardy's. I've never eaten at Hardy's so I went there. The place was packed. I waited ten minutes just to place my order. I bought enough food for two people. I'm not sure if it was good or not, I ate so quickly that I barely tasted it.
The next stop was Family Dollar to buy food for 2.5 days. I usually go to the Dollar Store, but it was over a mile away. Family Dollar was adequate, but I felt like I was only buying calories. They didn't have the usual stuff that I buy, but I made do. This resupply consisted of pop tarts, snickers, peanut butter crackers, Nutella, sardines, hamburger helper easy macaroni, a new smart water bottle, a few bags of chips, and Oreos. If I didn't look and smell like a hiker, the lady at the cash register would probably assume I was stoned.
The next order of business was to go to Subway. I was so happy to finally be in a town with a subway within walking distance. I bought a footlong sub to take back on the trail with me,charged my phone, and called my Dad to firm up our meet up location in a few days. All in all, a very productive town stop. My only concern was how to get back to the trail. I was planning on trying to hitch for no longer than twenty minutes. If that didn't work out I would pay for a shuttle. As I was walking back to the main road a car pulled off the road right in front of me. I younger looking kid and his girlfriend asked me if I wanted a ride. When I looked in the backseat I could see to hiking packs. It turns out that he is thru-hiking, but lives in a nearby town. He had just taken a few days off and was returning to a different spot on the trail. I gladly accepted their offer. I feel bad that I forgot his name, so I'll just have to make due with; thanks kid from Lexington that started the trail on March 17. I really appreciated the unsolicited ride.
They dropped me off at the trailhead a little before noon. I was just in time for the hottest part of the day with the toughest climb of the day. I was not very excited to get started. After the high mileage days lately and rushing around in town, I had zero energy. Today was definitely a one foot in front of the other kind of day. I made it through the first mountain ok. It had a few steep sections, but overall it was well graded. I stopped at the top and ate half of my sandwich while looking out over the mountains. 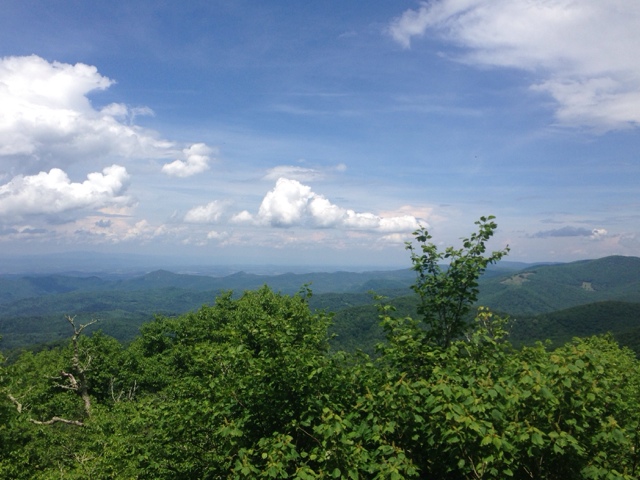 Subway sandwich lunch view
After that it was all downhill(then up, then back down, and repeat). Shortly after lunch it started to rain. I could hear thunder in the distance, but I was unable to make myself go any faster. I lumbered along at 2 mph getting soaking wet. Luckily, it didn't pour all afternoon, but it did drizzle off and on for the rest of the day.
I got a really nice view from every mountain that I went over today. 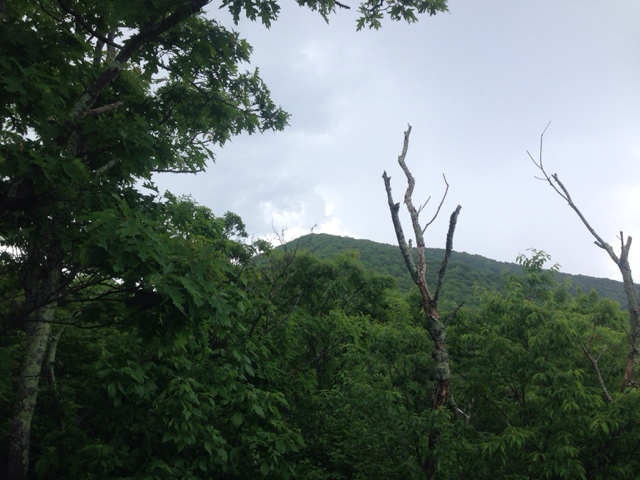 That's the mountain I had lunch on 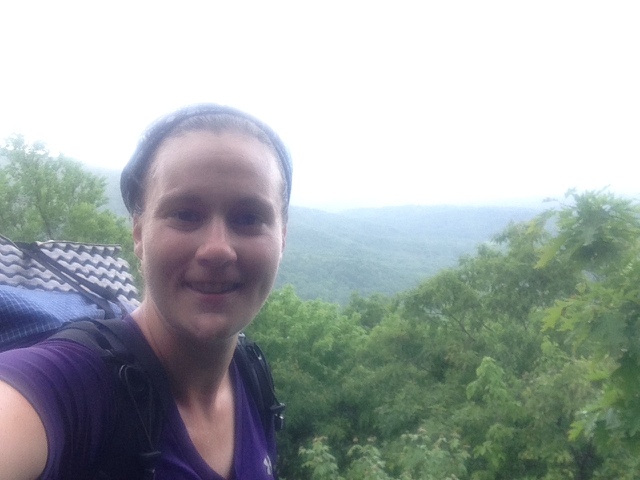 This is when it started to rain(still smiling though) 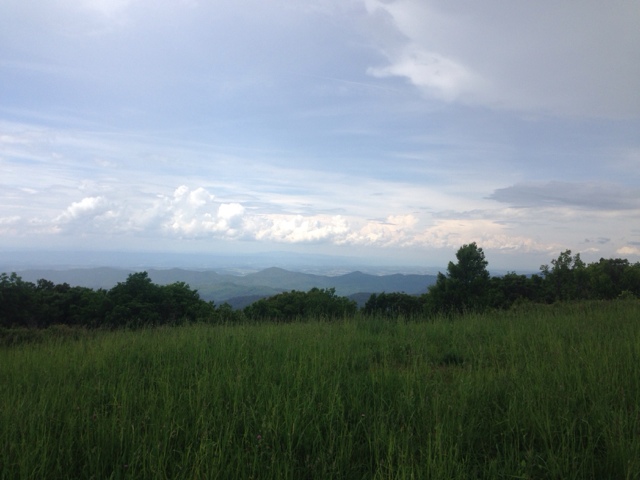 View from a Bald 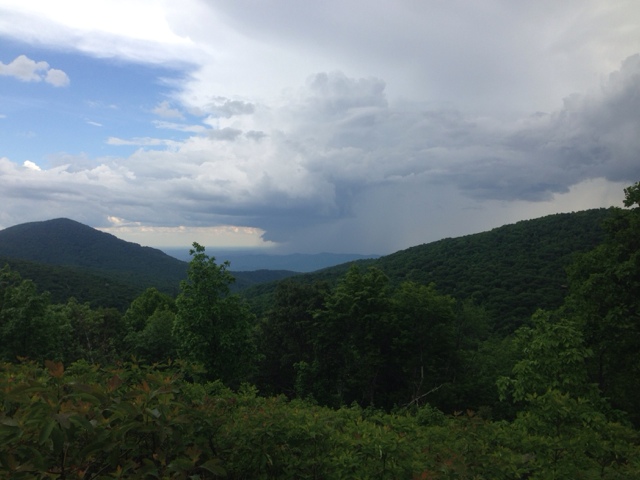 I climbed both of those mountains today. Notice the ominous clouds? 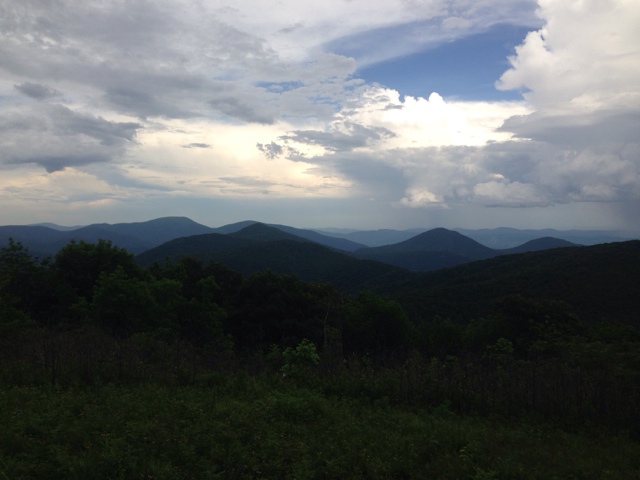 Feels like I've climbed all of these in the last few days
The last six miles of the day were rough. I walked right past the side trail for my next water source, which lead to me backtracking .3 miles to get water. The water source was .3 miles off trail as well, so that was almost an extra mile added to the day. I followed that mistake up with an awesome slip and almost fall. I was able to catch myself just in time, but it caused me to strain my back. After that I really slowed down.
I finally made it to my planned campsite a little after six. I'm camped by myself along a small babbling brook. I'm in a super creepy, but cool at the same time forest. I didn't get any postures before it got dark. I'll try to get some for you in the morning.
"A human being is a part of the whole called by us universe, a part limited in time and space. He experiences himself, his thoughts and feeling as something separated from the rest, a kind of optical delusion of his consciousness. This delusion is a kind of prison for us, restricting us to our personal desires and to affection for a few persons nearest to us. Our task must be to free ourselves from this prison by widening our circle of compassion to embrace all living creatures and the whole of nature in its beauty." -Albert Einstein
Posted by Yoda at 9:19 AM