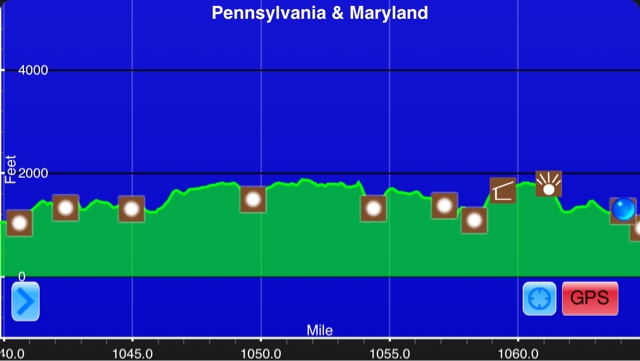 Maryland has been a hikers paradise, except for the rocks. The terrain has been mostly flat, with very wide well maintained trails. There have been a few extremely muddy sections, but that's not Marylands fault. From what I've heard, the rocks are just a preview of whats to come in Pennsylvania, or as hikers love to call it, Rocksylvania.
I was up and out if camp at my usual 7:00. I started off with a moderate climb to get my blood pumping. Almost immediately I entered The Washington Monument State Park. Did you know that the Washington monument in DC isn't the original? The original is located in Maryland and is located .1 miles off of the AT. I was thrilled to be able to see it firsthand. 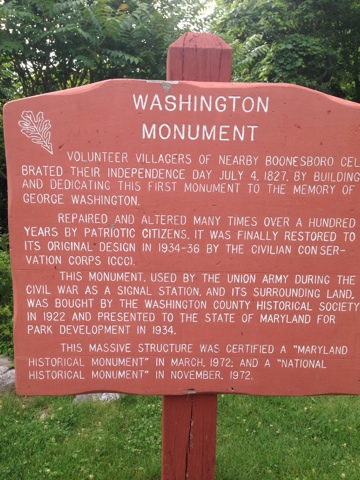 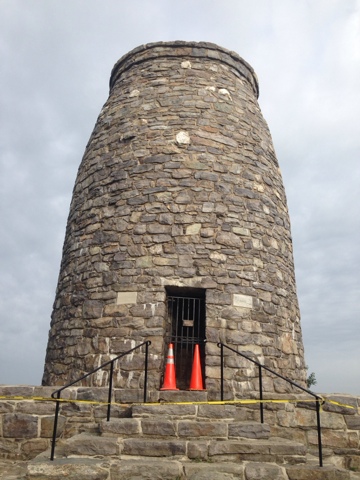 Original Washington Monument
I sat on a bench nearby and ate my second breakfast. The neat thing about the monument is that you can see where the townspeople collected the stone from to build it. There was a giant rubble field located right behind the monument. 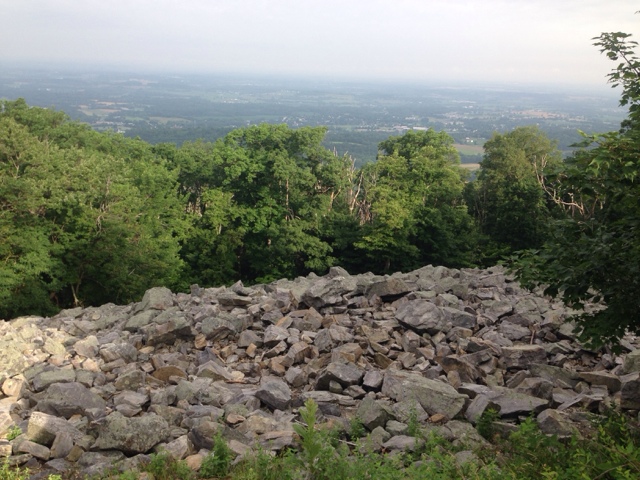 Field of stone
Most of my hike today was uneventful. I spent most of the morning dodging mud puddles, day hikers, and rocks. I have never seen so many people out hiking before. I must have seen close to 200 people on the trail this afternoon. I'm pretty sure that every boyscout in a 50 mile radius was hiking today. It was nice to see so many people out enjoying nature, but a good portion were loud and inconsiderate. I picked up a good deal of garbage from the side of the trail.
I spent most of the afternoon listening to my audiobook, Into The Wild. I'm almost done listening to it and I still can't decide if I love it or hate it. When I wasn't listening to my book I was hiking with, Five, who I met a few days ago at the Bears Den hostel. He is a retired cop from Cleveland, Ohio and quite the character. He never stops talking, even while going uphill.
Part of the hike took me through wide open fields. 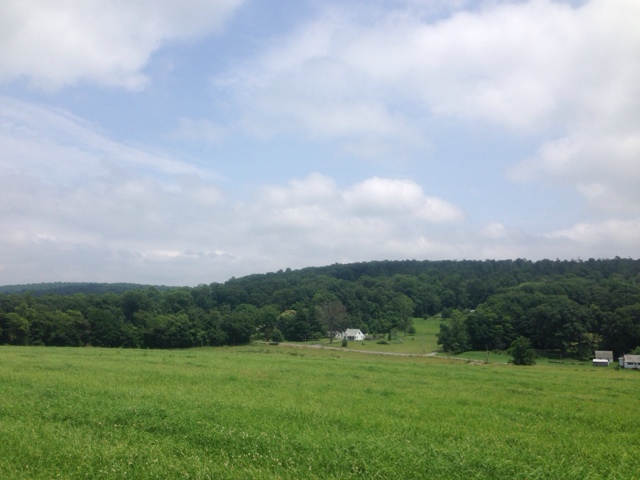 Maryland has hills instead of mountains 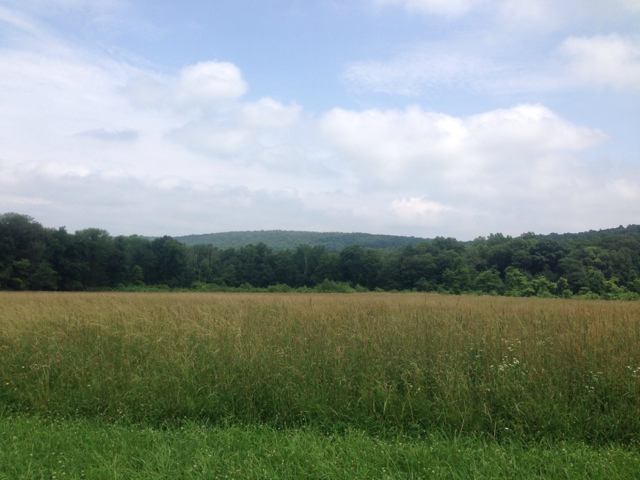 Talk grass like this always reminds me of the scene in Gladiator where Russell Crow is running his hands through the wheat fields
At this point I was starting to run out of steam. I had hiked 18 miles and had the hardest part of my day left. I gave myself a pep talk and pushed on. After a very difficult uphill climb through a boulder field, I came to a blue blazed trail with no description. I decided to take a chance on it. I walked up a steep, but short side trail and was greeted by an excellent view. 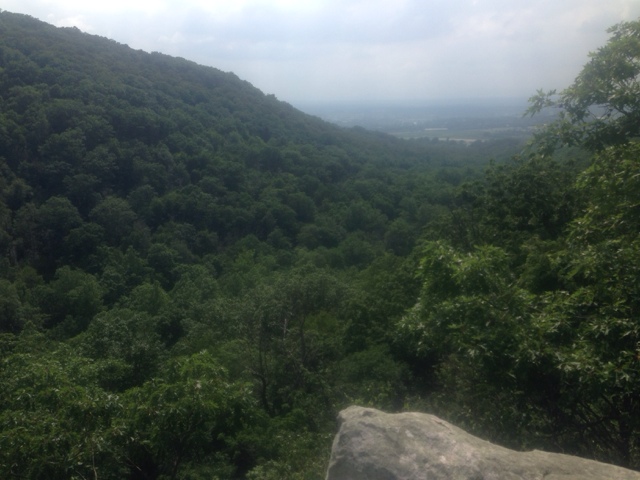 Raven Rock
I spent 20 or 30 minutes taking in the view before I headed out. The next section of trail was not fun. All downhill with big rocks waiting to trip me up. I was determined to make it to Pen Mar county park, which meant I had to dig deep to finish the last 5 miles. Eventually I reached the point of no return when I passed up a shelter, the last water source before the park. I knew bad weather was rolling in so I hurried along as fast as my tired legs could carry me. With 2 miles left I saw my worst nightmare, a steep uphill with more big rocks than there was dirt on the ground. 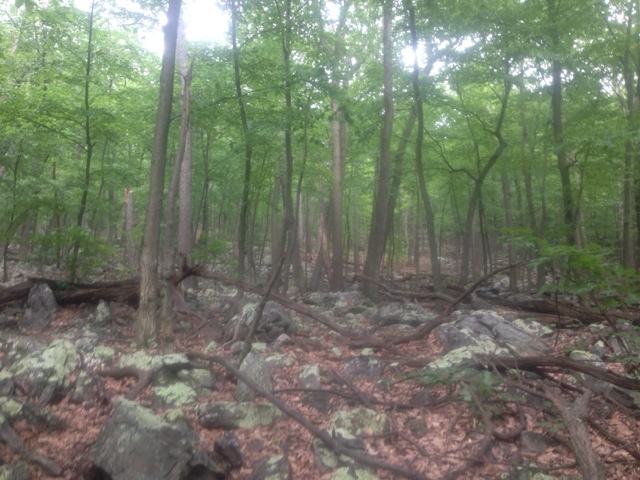 Ugh
The force must have been with me though, I went up about 20 yards and the trail turned to the left away from the rocks. I cruised the final stretch into the county park. The sky was looking very ominous. My original plan called for me to cook dinner here, relax, and then continue on .3 miles so I could cross the Mason/Dixon line and cross into PA. I was informed that the weather was going to be very severe with high winds. I decided I couldn't stay out in that, but the park doesn't allow camping. I was stuck between a rock and a hard place. The park official said that I could hunker down in the pavilion until the rain stopped, since he had already told me it would last all night, I took that as a sign that I could stay there. I took cover in the pavilion as the rain started. Rusty was already there and had ordered pizza and cokes. He offered to share with me and all was right in the world. The park emptied out and I waited until dark and a break in the rain before I set up my hammock. I was a little worried about getting into trouble since, technically I was breaking the law, but I figured since the weather was so bad nobody could fault me for not moving on into a storm. 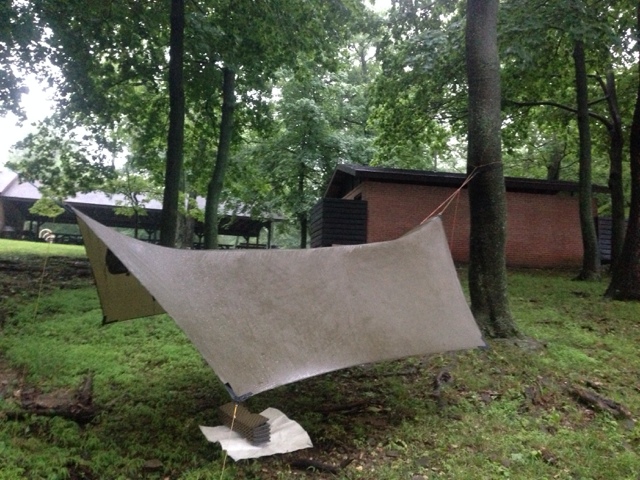 Living on the edge, illegal camp spot
I plan on getting up and packing camp early before anyone shows up.
I'm disappointed that I didn't make it into PA, but now I have something to look forward to tomorrow.
"Challenges are what make life interesting; overcoming them is what makes life meaningful." - Joshua J. Marine
Posted by Yoda at 10:41 AM