June 03, 2016
Casa De Luna(478.4) 0 Miles Hiked
The Pacific Crest Trail is so different from the Appalachian Trail in a lot of ways, but lately the main difference is how much time I spend sitting around waiting to hike. There is still a lot of snow in the Sierra mountains so we are killing time in Southern California instead of twiddling our thumbs in Kennedy Meadows(the beginning of the Sierra). It is a delicate balance. The longer we stay in the south the hotter it gets, but it gives us a better chance of having favorable conditions farther north. A good portion of the Sierra is at very high elevation and it is taking awhile for the snow to melt. Yesterday we were dealt another curveball. There was a rather large fire that looked like it might close the pct just before Kennedy Meadows. They had to close the road leading into town. Over 1,800 acres were burned and it was only 33% contained. With so much uncertainty about how to proceed, we decided to wait for Uturn and Spaceman to catch up to us today. That would also give us more time to see what was happening up north. Recent reports say that the pct was spared from the fire and the road to Kennedy Meadows will reopen tomorrow. Dealing with unexpected fire closures is part of the logistical challenge of this trail.
I was up earlier than I liked this morning. I just can't sleep when it is hot outside. Terri cooked us pancakes for breakfast and we enjoyed watching all of the new hiker arrive as we were eating. Juicy, Chizpa, and Lost and Found hiked the 24 miles from Hiker Heaven straight through. They showed up around 6:30 am looking pretty rough. Throughout the rest of the morning a lot of other hikers came pouring in. A few had done the 24x24x24, which I don't condone. I think it is stupid and dangerous. The challenge is to hike 24 miles in 24 hours while consuming 24 beers. In this desert terrain and heat I can't imagine a worse judgement call. Several hikers have had to be rescued this year because of this. The two people who came in today were lucky that nothing bad happened to them.
I used my down time today to hand wash my laundry and watch the new episode of Game of Thrones. I'm very pleased with this season. It has been amazing! I unsuccessfully tried to learn how to draw Yoda. I am a horrible artist and it was a pretty epic fail. Terri Anderson has two giant sheets hung up on her garage for the class of 2016 to sign their names on. I thought it would be cool to draw a picture of Yoda under my name. Luckily I tried it out on cardboard before committing it to the sheet. 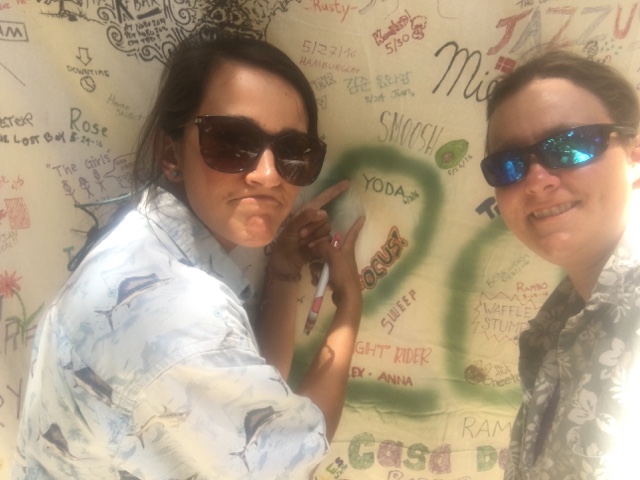 Sprinkles and I
One of the fun things about staying at Casa De Luna is the Hawaiian shirts that Terri gives us. It is pretty fun to see everyone wearing them. 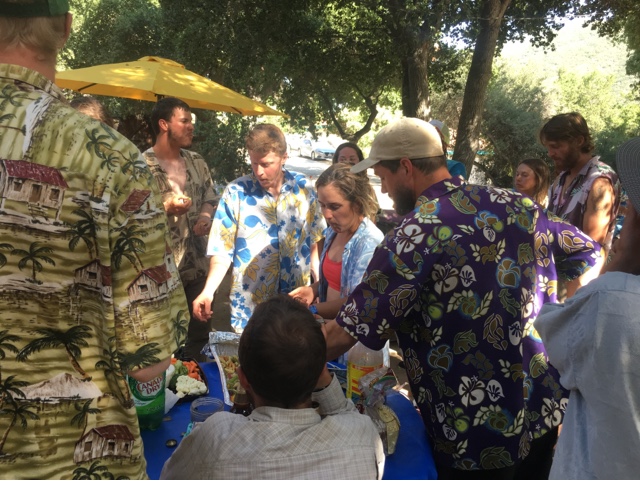 Very festive
There are also arts and crafts. It is tradition to paint a rock to leave somewhere in the yard. Somehow I never found the time to participate. 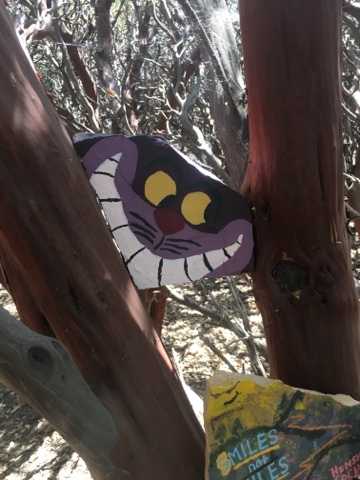 Cheshire Cat rock art
Most of the other hikers sat in the shade and drank beer all day. I only had a few beers. I didn't want to get dehydrated. I just tried to follow the shade around and conserve my energy. I was feeling pretty anxious. I just wanted to be back on the trail hiking, not sitting around in the heat all day. I could have hiked out in the evening, but I like hiking with this group and I'm not ready to get separated from them again.
We waited for a coffee shop to open at four and descended upon them like ravenous wolves. I had a delicious milkshake. It had peanut butter and bananas. Eventually Outro showed back up. She went to L.A for the day. I asked her to pick me up some superfeet insoles for me shoes. My insoles are pretty shot. I'm hoping that helps my heel pain. We are heading out in the morning. I'm hoping this ridiculous heat wave is coming to an end, but I think it is just wishful thinking. 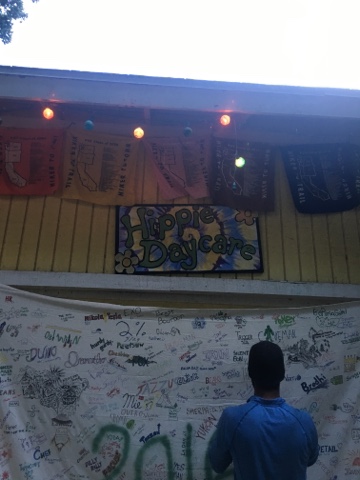 Pretty much sums up Casa De Luna
"There are two types of seeds in the mind: those that create anger, fear, frustration, jealousy, hatred and those that create love, compassion, equanimity and joy. Spirituality is germination and sprouting of the second group and transforming the first group."
- Amit Ray
Posted by Yoda at 7:21 AM