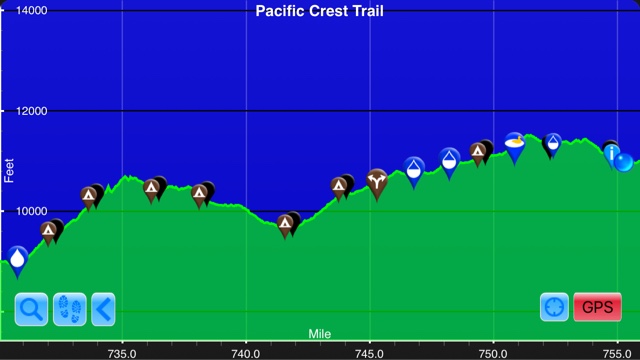 We are getting really close to Mount Whitney now. Outro and I were taking a look at our maps and decided that in order to have a sunrise summit we would have to hike twenty miles today, twenty miles tomorrow, then sleep for 4-5 hours and hike eight miles to the summit. We decided to hike a longer day today, to make tomorrow more manageable.
I attempted to get an earlier start this morning. I succeeded, but not by much. I started hiking around 6:45. I would have left earlier, but when I picked up my sunglasses they broke in my hand. It took me awhile to rig up a duct tape solution. The first part of the hike was another big climb, but I thought it was pretty easy and the views were nice. I heard that at the top we would have cell phone reception, but that turned out to be incorrect. Nevertheless, it was a good motivator to get me flying up the mountain. 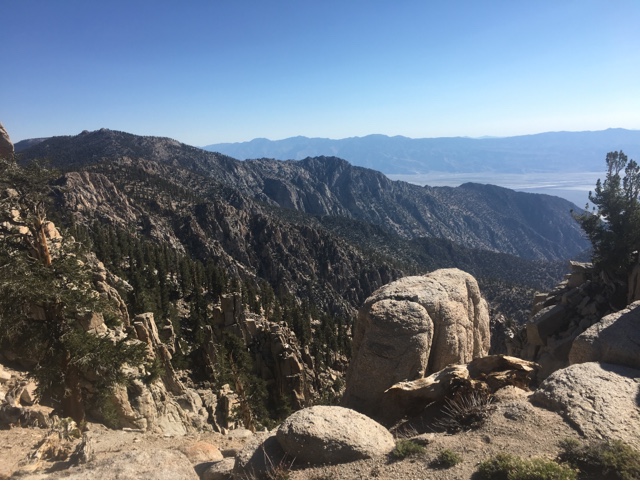 Reminds me of Knifes Edge on Mt. Katahdin
One of the things people say all of the time on trail is, "smiles, not miles", well today was all about the miles for me. Now don't get me wrong, I enjoyed the hike today, but I was definitely focused on making my miles. I didn't take a single break for the first ten miles. When I did finally stop it was to eat a bar and to pee. I was back on trail after five minutes. 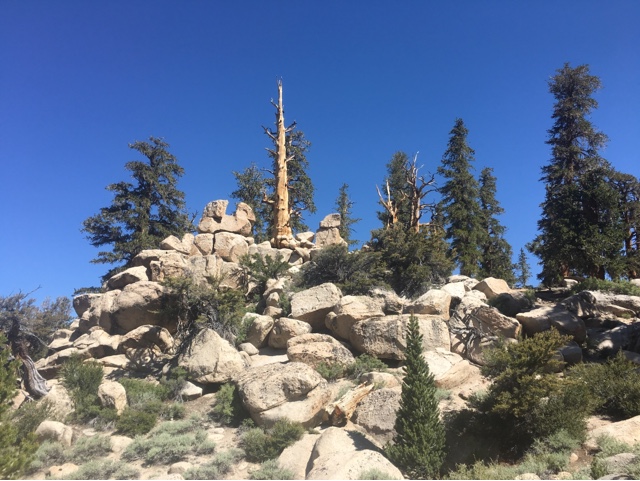 Cool scenery today
I took my first real break at mile 12.2. I was almost out of water and since I was stopping to filter I decided I might as well eat lunch as well. Outro was already there when I arrived. It was during this lunch break that we came up with the masochistic idea to hike a twenty five mile day through the Sierra. We decided to hike as fast as we could to get to the lake. We could still have a swim, cook dinner there, and get in the rest of our miles. In theory in sounded easy, the reality was much different. It was quite the climb to get up to the lake. We hit 11,500 feet of elevation so it was a struggle. I kept up with Outro for most of the hike(which is no easy feat), but in the end she pulled away and left me utterly spent. The final mile and a half to the alpine lake, Chicken Spring Lake, just about killed me. 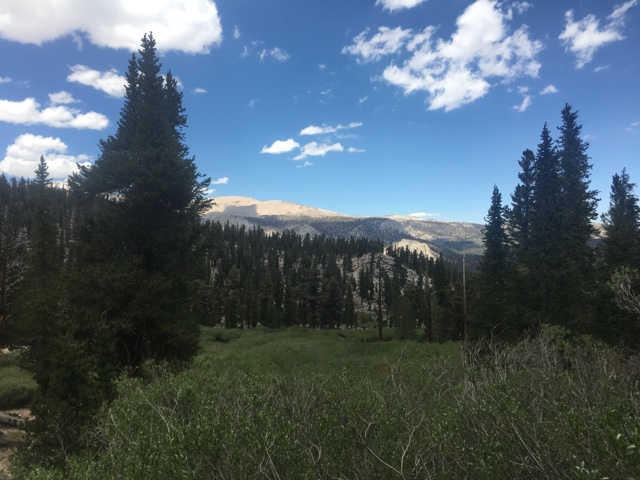 Meadow before the lake 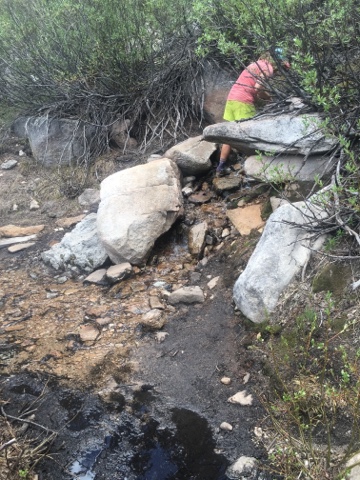 Best water source of the trail. Ice cold
I made it to the lake at 3:30, which was a twenty mile day. I really just wanted to eat and go to bed, but I couldn't. Sunrise on Mount Whitney will be epic and well worth a long day today. 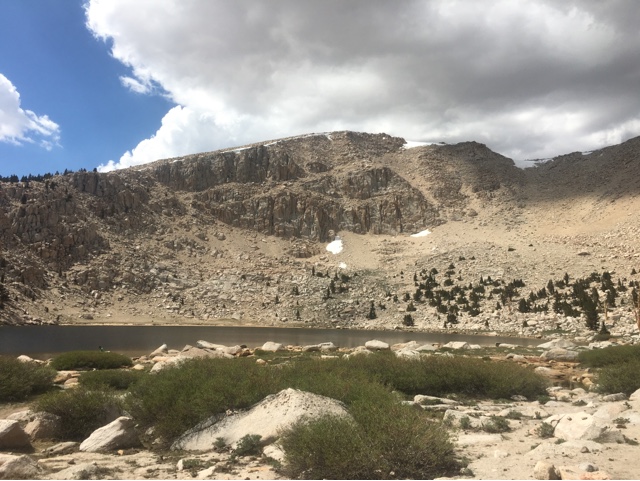 Chicken Spring Lake
I took a well deserved long break. I washed my socks in the lake and cooked dinner. Just as I arrived the sun hid behind the clouds and it was too cold in the shade for me to swim. I saw a lot of new faces there. We must be breaking through a new hiker bubble. I started to pack up my things around 5:30 and was on the trail by six o'clock. The hike to our camp spot was very difficult. We gained a lot of altitude very quickly and through my nemesis, loose sand. 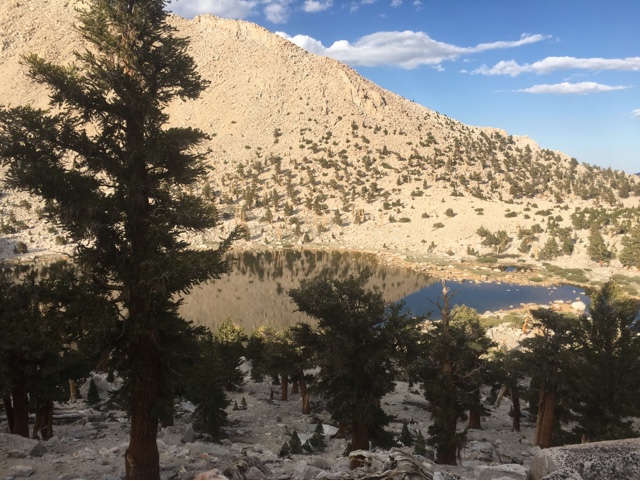 View back down to the lake
I was so focused on making it the remaining 4.4 miles to camp that I didn't realize that we would be entering SEKI, (Sequoia and Kings Canyon National Park). The PCT goes through five nation parks, Sequoia, Kings Canyon, Yosemite, Lassen Volcanic, and Cascades. I expected to see giant sequoia trees as soon as we entered the park, but so far I haven't seen a single one. 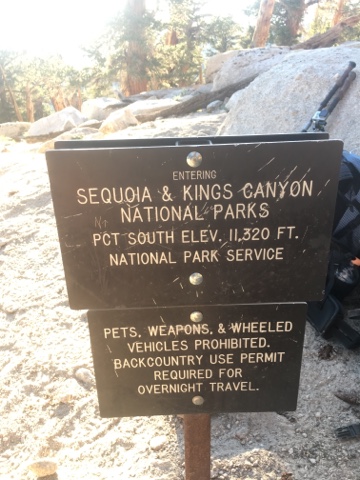 National Park boundary line
Outro, Zuul, and I quickly set up camp, put our bear canisters away from camp, and filtered some water. After such a long day I was exhausted and went to bed with thoughts of Mount Whitney playing through my mind.
"Challenge doesn't build character. It reveals it" - Unknown
Posted by Yoda at 8:10 AM