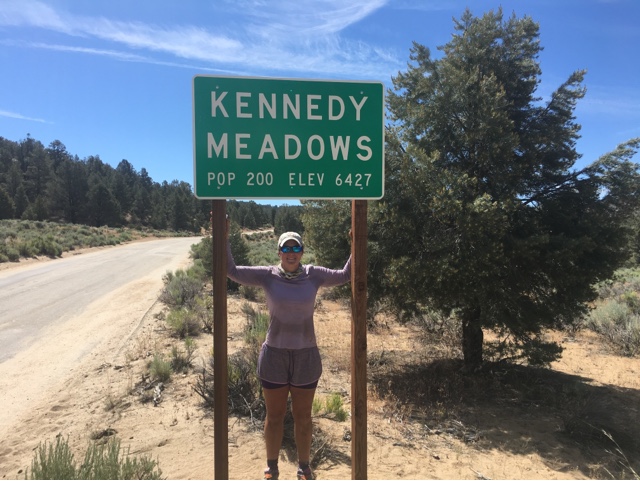 For weeks we have been planning on taking a zero day at Kennedy Meadows. Last night we decided not to zero and to hike out around four o'clock and only hike four or five miles. This morning we had to readjust our plan. Homegrown and Raging Pineapple both got sick in the early morning hours. We aren't sure if it was something they ate or if it was just a stomach bug, but they were violently ill. The good news is that it was short lived. By two o'clock they were both up and moving around. We decided they needed the remainder of the day to rest and rehydrate. We also want to make sure that nobody else gets sick before we head out. This next stretch has us in the backcountry for a seven day stretch. I'm glad that they got better quickly and I really hope that nobody else gets sick. Being sick in the backcountry has to be a miserable experience.
While they were recuperating, Outro, Evac, U-Turn, Zuul, and I went to the only restaurant in the area, Grumpy Bears. Since it is four miles away they offer a shuttle. We were picked up around eight thirty. We were all excited about all you can eat pancakes and wifi. There is no cell phone service here so I was relying on wifi to get my blog posted and to get a few other things accomplished. Unfortunately, the wifi wasn't very good. I got a few emails and text messages out, but that was the extent of what I accomplished. The all you can eat pancakes included two eggs, two pieces of bacon, and potatoes. The pancakes were huge. I couldn't even finish one. 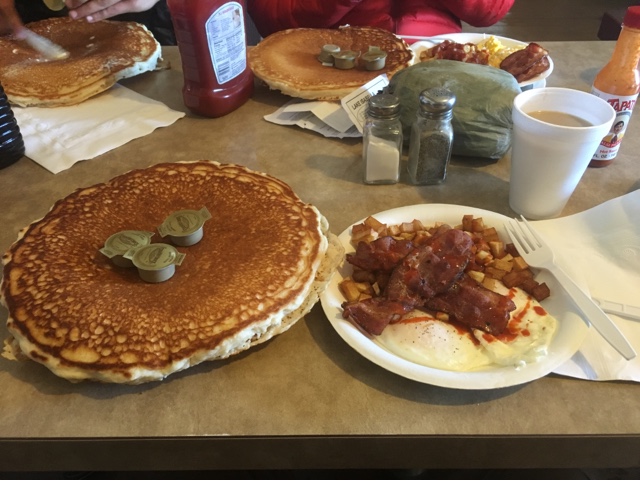 Hiker sized breakfast
We gave up on getting anything done on the wifi and caught a ride back to the general store. It was already getting really hot so we found a place in the shade. I checked on Homegrown and Pineapple, they were feeling a little better, but still looked miserable baking in the heat. I talked the owner of the general store into giving me a large bag of ice. I figured the only way to help was to get them more comfortable temperature wise. We spent most of the day hanging out with other hikers and had some deep conversations about taboo subjects such as religion and politics. It was an interesting conversation. People would take turns playing devils advocate and nobody got mad or upset. Eventually it cooled down enough for me to attempt packing up my pack. I've been packing it the same way ever since my first day in the AT. I have to figure out a whole new system to make it work with the bear vault. I'm really not happy about the way it is working out. Hopefully I can figure it out as I go because right now it isn't working for me. The bear vault takes up most of the volume of my pack and it is digging into my spine. I'm sure I'll find a system that works, but I'm pretty discouraged right now.
After working on my packing system I made up a box to send home. With all of the new gear I'm trying to shed weight anyway I possibly can. I sent home my umbrella, sit pad, old tent stakes, toggles I used to attach the umbrella, and a bunch of other odds and ends I've collected over the last 700 miles. The umbrella and sit pad equal the weight of my microspikes, but I couldn't figure out a way to cancel out the weight of the bear vault and ice axe. With seven full days of food it feels really heavy, but I just keep reminding myself that the more I eat the lighter it will get. I thought about sending home the ice axe because I'm hearing reports that I won't need it. In the end I decided that since I already have it I will carry it. If it becomes obvious that I don't need it I can send it home later.
I finally got a shower around five o'clock. They turned off the water just as I finished. I definitely cut it close. After getting squeaky clean I closed out my tab before the store closed. Running a tab is a dangerous proposition. I spent way more money than I had planned on. Dinner consisted of a pint of Ben and Jerry's ice cream. They had my favorite flavor, Coffee, Coffee Buzz Buzz Buzz. 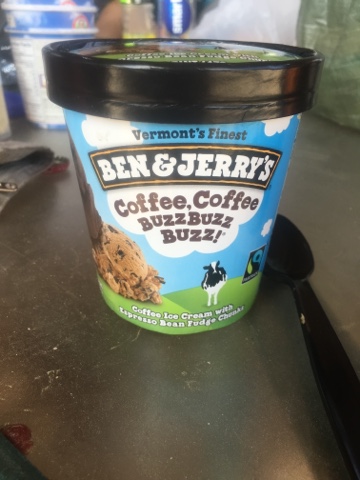 Delicious
We spent a few hours around camp talking about our upcoming obstacles and complaining about bear vaults. The plan is to hike out in the morning. We hope to make it five miles before it gets too hot out. We will take a break next to the Kern River until it cools down. Once the temperature becomes more agreeable we will hike another nine miles to a tentsite with a water source. Our daily mileage throughout the Sierra will be somewhere in the 15-18 mile range. Cell phone service is not very likely for the next seven days. I will check several times per day and I will post my blog whenever I can. You can get email updates alerting you when my blog posts by signing up on the home page. Your email address will stay private.
Healing is a matter of time, but it is sometimes also a matter of opportunity." - Hippocrates
Posted by Yoda at 8:01 AM