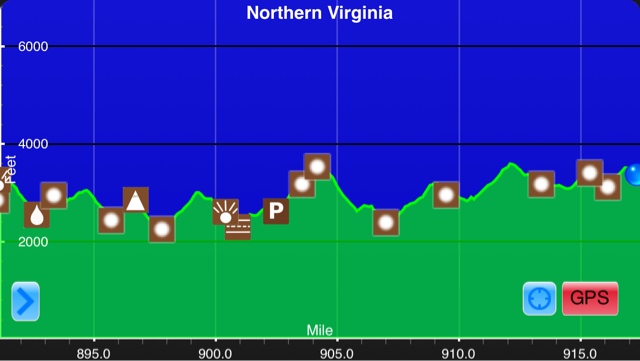 I was more than a little tired this morning when I woke up. I was also a little sore, which is pretty unusual as well. I thought about sleeping in, but two things pulled me out of the comfortable hammock. In a few hours I would see my parents again and I was hitting the 900 mile mark. I quickly broke down camp and ate breakfast. I hit the trail around 7:15, which has become my usual starting time. I didn't have to walk very far to get to my first water source of the day. It was a very idyllic little creek. 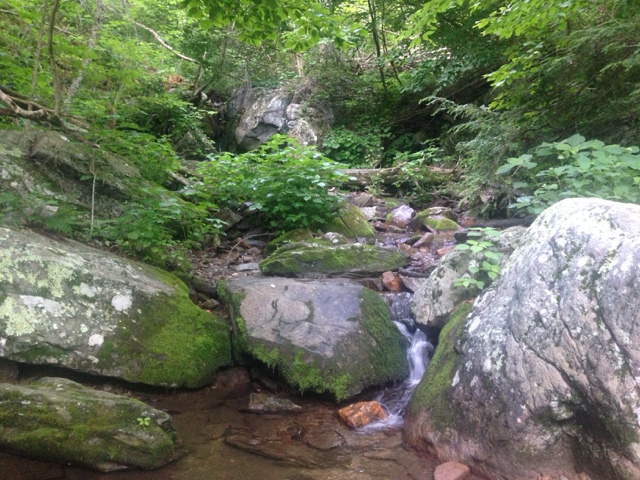 Ivy Creek
From here I had a small uphill that brought me back to Skyline Drive. The Ivy Creek Overlook had a pretty nice viewpoint of the Shenandoah Valley. 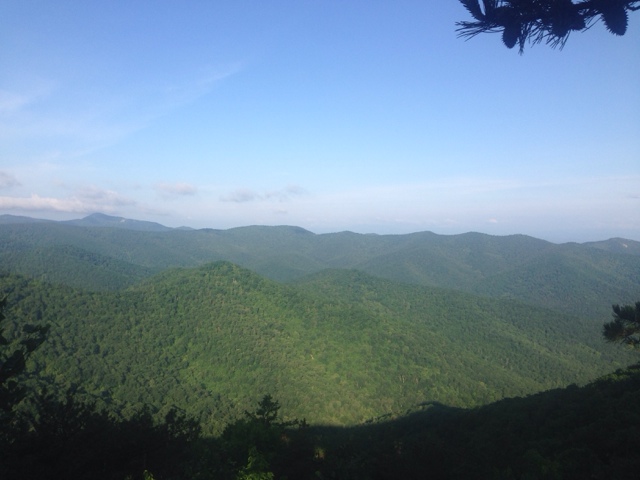 Ivy Creek Overlook on Skyline Dr
Right around this point in the morning I started to get anxious. I was supposed to text my dad a meeting point for a few hours later, but I didn't have enough cell service to get a message through. I was 17 miles farther than we had originally planned on meeting. I stopped to check my reception every 10-15 minutes, which was killing my battery. I carry a Delorme InReach personal locator beacon that allows for two way communication, so I figured worst case scenario I could use that to send him a message. I just didn't want to spend 50 cents if I could get out a text for free. I eventually got word to him via text on where to meet. They were running early so I tried to pick up the pace. Our meeting point was at mile 900.9. I was very happy to cross 900 and then see my parents. The 900 mile mark should have been on the trail on the downhill, but it wasn't there. I was secretly pleased to make my own. I used sticks and leafs again and I think it was my best one yet. 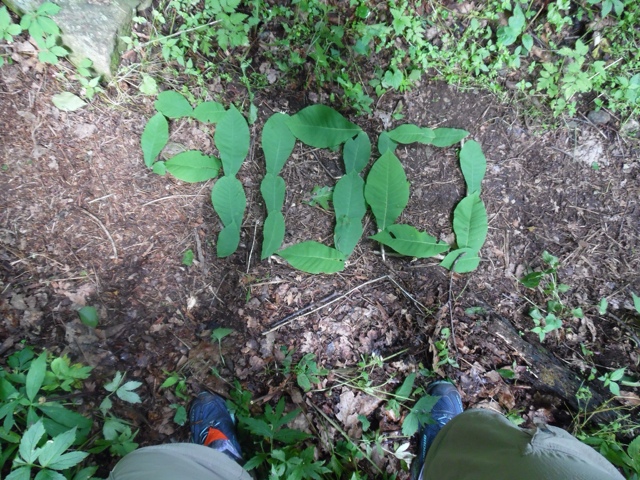 I used leafs that were already on the ground per Leave No Trace(LNT) guidelines
Since I had to take the time to make my own sign I was a little behind schedule, but it was a beautiful day so I figured my parents wouldn't mind waiting a few more minutes. On the way down to see them I came across Powell Gap Hollow, which had a nice view. I took a few seconds to snap a picture when I noticed someone had put the 900 mile mark there. 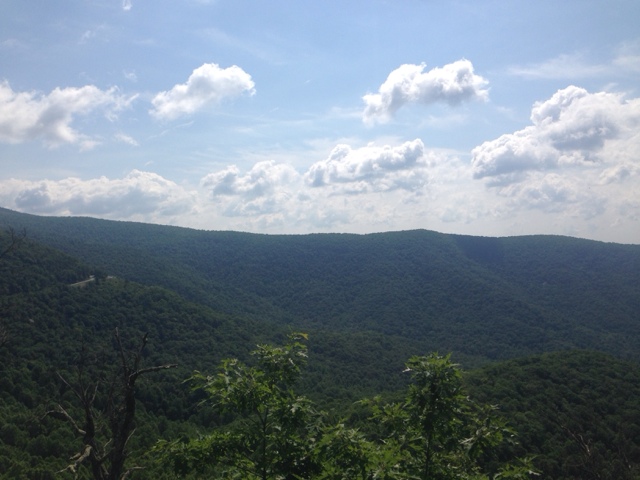 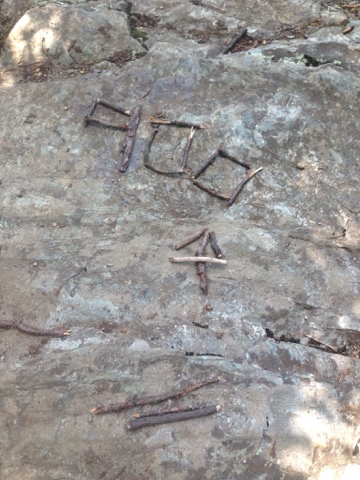 Lackluster mile mark at 900.4
As I came out of the woods my mom was waiting to greet me and take my picture. It had only been two and a half days since I had seen them, but it's always great to see their faces light up when we meet again. I was glad they finally had nice weather to enjoy the scenery. When they dropped me off at Springer Mountain it was cold and rainy just like the other day at Dripping Rock. 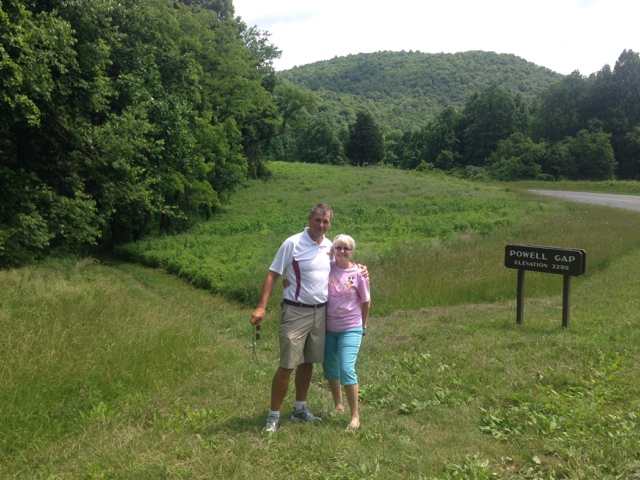 Dad and Mom
When they picked me up out of the rain last week I gave them honorary trail names. My dad is always planning things out, so I called him, Hannibal, from the A-Team series. His tagline was always' "I love it when a plan comes together." I decided to call my mom, The General, because that was my grandfathers nickname for her. My dad was a colonel in the Airforce and my grandfather used to say that made my mom, The General.
We drove down Skyline Drive a little ways until we came to an overlook. I sorted through the food they brought me and they enjoyed the views. I was also able to charge up my cell phone and they gave a few other thru-hikers some M&Ms. Before I knew it the time to say goodbye had arrived. They drove me back to the trailhead and we said our goodbyes. I'm hoping to see, The General and Hannibal, again before the journey comes to an end.
The rest of the afternoons hike was much more difficult than the day before. There were a lot more up and downs. Nothing major, but definiety not easy cruising terrain. After leaving, Hannibal and The General, I had a pretty good uphill climb to Hightop Mountain. I was paid off for the effort with a nice view. 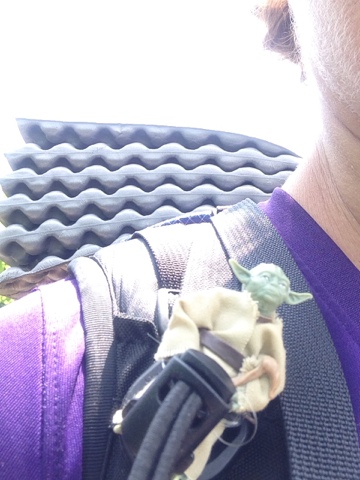 Yoda was not impressed(Gift from Hannibal)
I spent the rest of the day trying to make miles. I've really enjoyed the relative ease of SNP. The trail has been really nicely maintained and I'm in love with all of the day use picnic areas, the campgrounds/camp stores, and the waysides. I had two goals for the end of the day, hike 23.6 miles and make it to the camp store before they closed. I knew I could achieve 23.6 miles, but the camp store closed at six and I only had two hours to hike 5.5 miles. First thing in the morning and that would be an achievable goal, but I'd already done 17.5 miles today and had the long day yesterday. All I could do was my best and see what would happen. As Yoda would say, "Do or Do not, there is no try." I crushed the first hour, hiking 3.5 miles with a good portion uphill, I faded on the second half though. In the end, I made it with minutes to spare. A cold coke and ice cream sandwich were my reward. "But Wait There's More"(said in my best infomercial voice). I turned off airplane mode on my phone and had a message from Airlock. She questioned my sanity on hiking 28 miles yesterday and then told me about the trail magic she had received. A very nice gentleman, that had a timeshare condo in Massanutten, had offered her and other hikers a place to stay the night. He basically runs a free hiker hostel. She told me I could probably stay there tomorrow night. I responded with a message telling her I was jealous, but overall content with my camp store smorgasbord. I quickly received an excited text message back. He was headed back to the same area I was in to pick up another couple of hikers and had room for me. We worked out the details and my fate was sealed, I would spend the night in a comfy bed after a big home cooked meal. I met, Max Factor, at the trailhead two hours later. He was very easy to talk to and a true trail angel. He has two condos that he uses for one week a year to do trail magic. He drives 45 min to the trail several times a day to either return hikers to the trail or to take them to his place. He also provides dinner and breakfast, sodas, juice, beer, trail snacks, and does it all with a big smile. It was almost too good to be true. As I walked into the condo I could smell the dinner he had prepared for Airlock, Wizard, and Fiddler. I quickly set about making a plate for myself when I was greeted with, "Hellllllllloooooo", from Airlock. I was very excited to have caught her. As it turns out she was only 1.4 trail miles ahead of me when Max picked her up. It was getting late so I ate, showered, and went to bed. 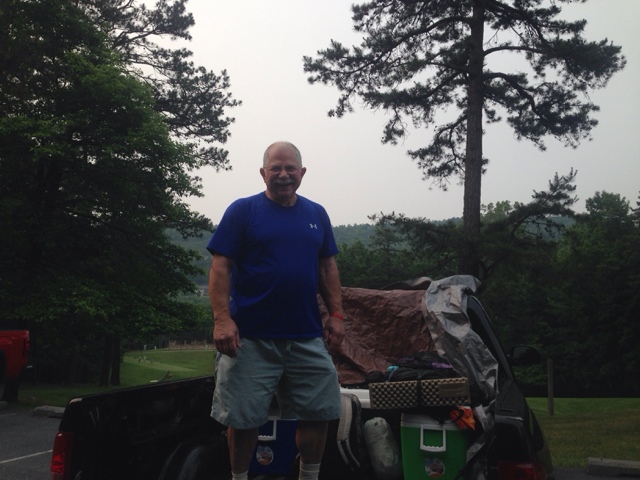 Max Factor(more on him later)
"Why couldn't Pheidippides have died here?" - Frank Shorter's comment to Kenny Moore at the 16-mile mark in one of Shorter's first marathons
Posted by Yoda at 8:02 PM