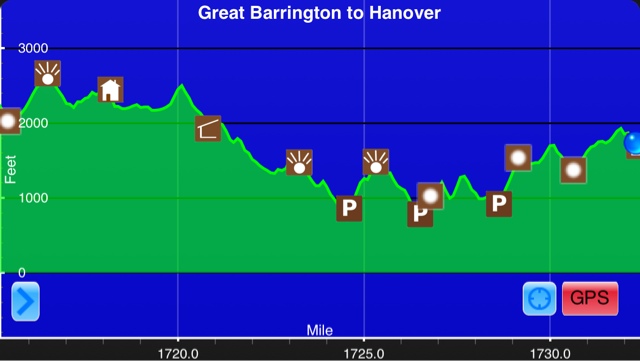 I feel like I'm back in Northern Virginia. Today was like doing the roller coaster all over again, very steep climbs and descents. People always describe Vermont as muddy, but in my opinion the mud isn't worth talking about. Vermont is the land of steep climbs.
I woke up to the sound of rain against my tarp. I dealt with it in my usual fashion, I rolled over and went back to sleep. When I woke up the second time, it had stopped. I had coffee cake for breakfast, but skipped my usual cup of coffee. Due to the rain, I was getting another late start and didn't want to take the time to make coffee. I didn't get back in the trail until 8:00. The morning started off with, you guessed it, a steep climb. Then I immediately went back downhill. I came to a side trail to, The Lookout, a private cabin that the owners allow hikers to use as a shelter. The coolest thing about it is the rooftop viewing platform. It was well worth the steep hike up to it. 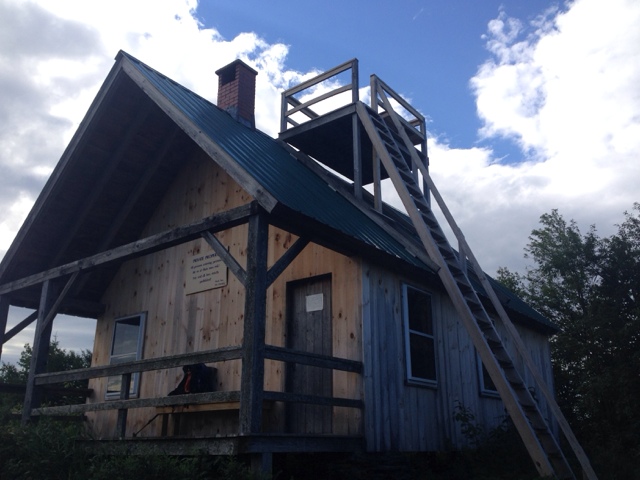 360 degree view
I decided it was worth spending some time there, so I made my morning coffee and enjoyed the view. 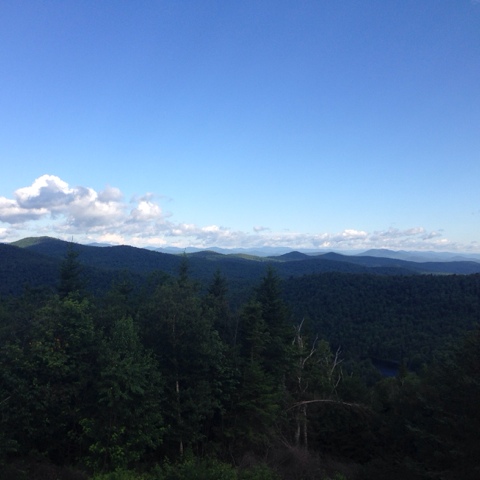 Breathtaking
I finally got decent cellphone reception, so I posted my blog, checked my email, and text messages. I got a message from South Paw. Outro, Adios, Laces, Clover, M&M, and her are still a few days behind me. I was hoping that my nero, double zero, and lower mileage would bridge the gap, but they have slowed down as well. I'm not sure if it will work out for us to hike, The Whites, together, but I'm trying my best to find a way to make it happen. I spent the rest of the day trying to figure it out. The only thing I've come up with so far has me taking three zeroes, which is not something I'm willing to do. It's just too hard to get back into the swing of things after taking that much time off. I did, however, change my plans for the next few days. Instead of going into Hanover tomorrow, I slowed down today and will get there on Monday. It doesn't bridge the gap much, but every little bit helps.
After leaving, The Lookout, I followed an old forest road for awhile. It was great hiking, with very minor elevation changes. The weather was also perfect. The sky was crystal clear and the humidity was almost nonexistent. After the nice trail, it was time for another really steep climb. I gained roughly 500' over .4 miles. Even with the cooler weather I was soaking wet with sweat. For the next hour and a half, I walked downhill. It was full of switchbacks, so it really wasn't that bad.
The rest of the day was like the movie, Groundhog Day. Every climb and descent was almost exactly the same, steep up, steep down, walk through a farm area/meadow, road, steep up. I must have done this five or six times over the next ten miles. The open meadow areas were really nice though. I had great views of the surrounding mountains. 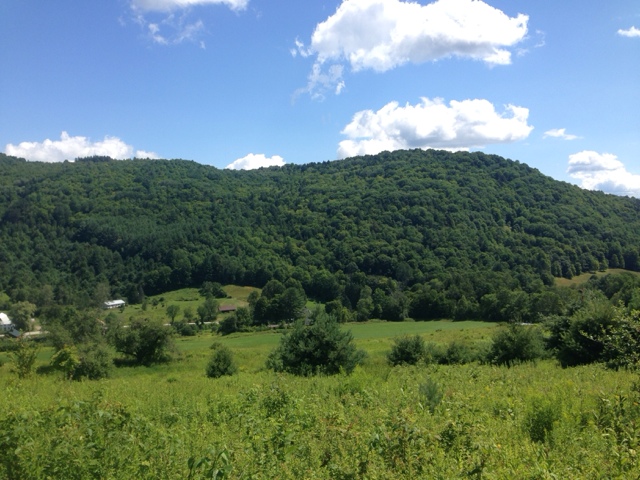 Looks like a desktop computers screensaver
Just before the steep climbs would begin, I'd have to walk through really overgrown brush. I started to feel claustrophobic going through it. 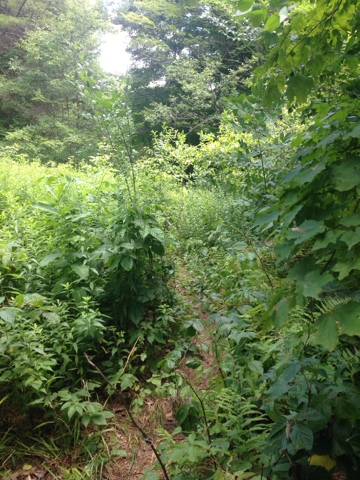 I guess the trail maintainers in this area are busy doing other work
Eventually, I decided it was time to finish off my audiobook, American Sniper. It turned out to be just the distraction I needed. The rest of the afternoon breezed by. I stopped frequently throughout the afternoon to enjoy the views and to eat my snacks. Towards the end of the day I came to a pretty good sized stream. Usually there is a footbridge to get across, but not for this particular one. I could only see one path across, but it looked like I was one rock short for it to work. I didn't feel like taking off my socks and shoes, so I just went for it. After one dicey moment, I made it across, I even managed to keep my feet dry. 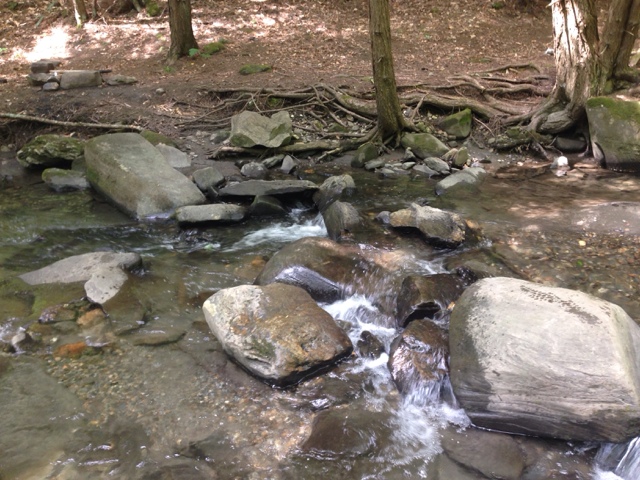 One rock short in the middle
My guidebook mentioned a farm fresh market .2 miles off trail. I decided to go check it out, since I only had a few more miles left to go. It was a neat little setup, but I was disappointed by the lack of food options. They had run out of sandwiches, so my options were, granola, crackers, frozen steaks and sausages, pints of ice cream, and locally made soda. I give you one guess on what I bought :-)
I sat outside on the doorstep and enjoyed my coffee flavored ice cream and raspberry rhubarb soda. It was the perfect treat to end the day, except I still had over 2 miles left. I wondered, briefly, how a pint of ice cream would sit in my tummy on the next climb. Surprisingly, it sat just fine. All hopped up on sugar, the miles to the shelter flew by.
This shelter has a great tenting area and I quickly set up camp. I wandered over to the shelter to see if I knew anyone. There were three section hikers that I hadn't seen before set up inside the shelter. The only other tent in the area belonged to, Big Mountie. I haven't seen him since Daleville. He had a foot injury and had taken five days off to let it rest. It was great to see him doing so much better, last time we talked, he was thinking about quitting. At least that's what I think he said, his English isn't very good. Most of the other Germans I've met out here, speak excellent English. 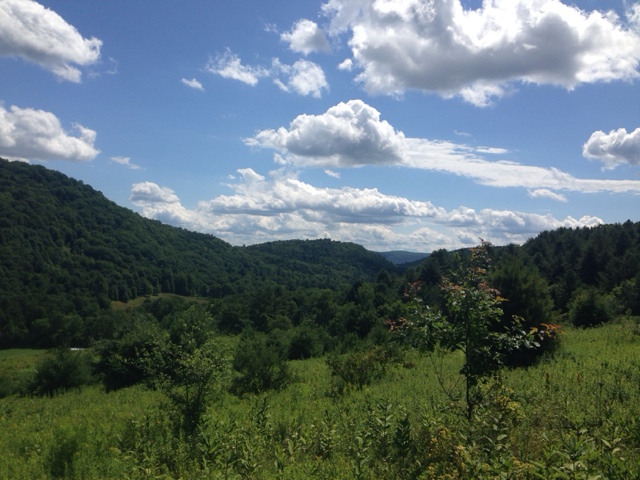 Now I know why they call these The  Green Mountains
"When asked what surprised him about humanity the most, the Dalai Lama replied:
“Man. Because he sacrifices his health in order to make money. Then he sacrifices money to recuperate his health. And then he is so anxious about the future that he does not enjoy the present; the result being that he does not live in the present or the future; he lives as if he is never going to die, and then dies having never really lived.”
Posted by Yoda at 8:33 PM