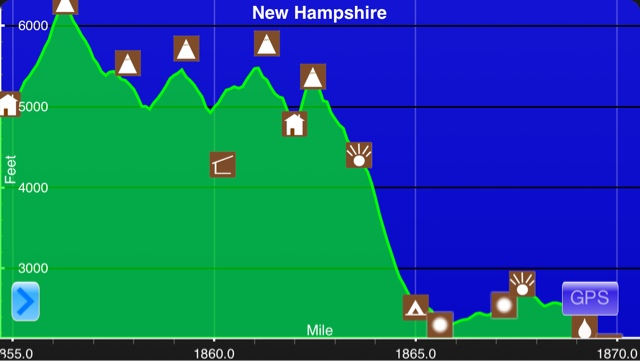 4:30 am came really early this morning. I did not get much sleep, due to the hard wood floors of the hut and the steady stream of paying guests filing in and out of the bathroom all night. We were up and out of the hut by 4:55. I haven't used my headlamp this entire trip, so I sent it home last week, doh! I used the flashlight feature on my cell phone until the sky lightened up enough to see where I was going. Mt. Washington was 1.3 miles uphill from the hut. It has the most unpredictable weather in America. Up until 1996 it held the record for the highest wind speed ever recorded, 231 mph. This mountain is no joke. People die all of the time. I've heard stories of people hiking up in warm weather and by the time they summit it is snowing. Luckily for us, it was supposed to be a clear day. 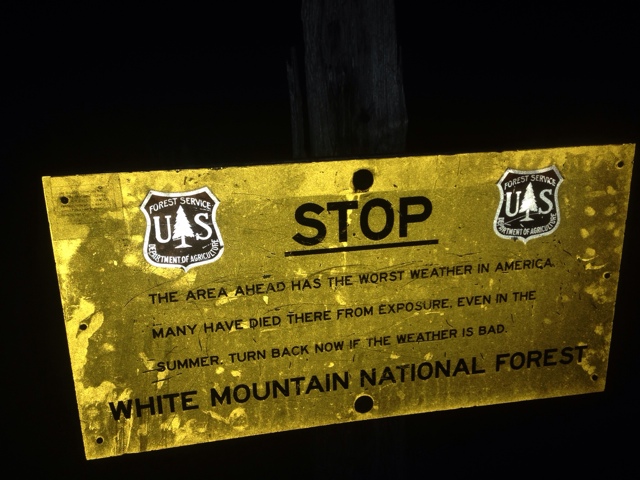 Warning sign on the hike up
The hike up was pretty uneventful. It was pretty rocky, but rocks usually aren't that hard to handle when I'm hiking uphill. Mt. Washington is the second highest point on the AT(6,288'), only Clingman's Dome in the Smokies is higher. As usual, everyone else made it to the top before me. It was so foggy at the summit, that it took me a minute to find them. It was also very cold, the wind was gusting close to 30 mph. I dropped my pack and immediately began putting clothes on. 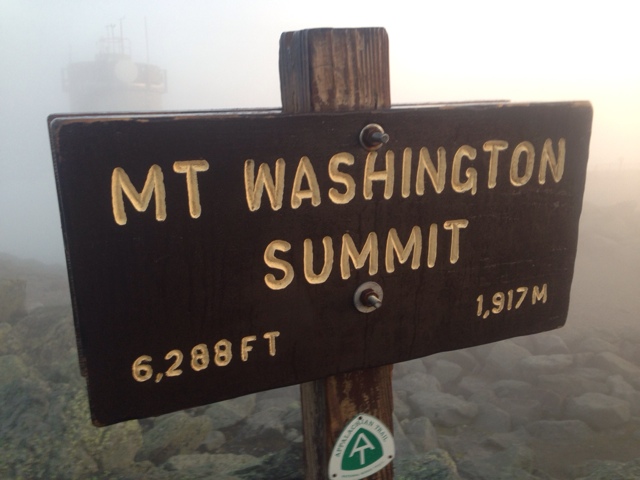 Third hardest climb on the AT(although most of the climb was yesterday for us)
We enjoyed watching the sunrise in between clouds that were blowing past. 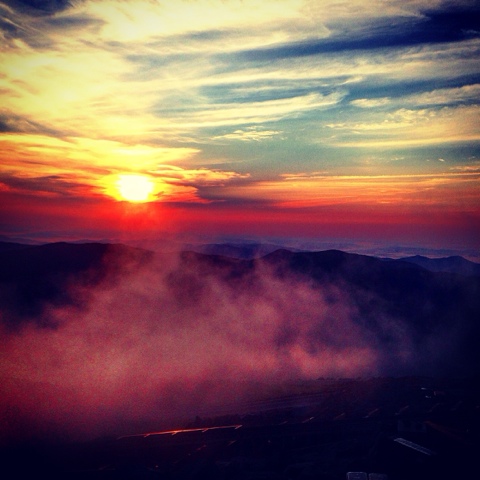 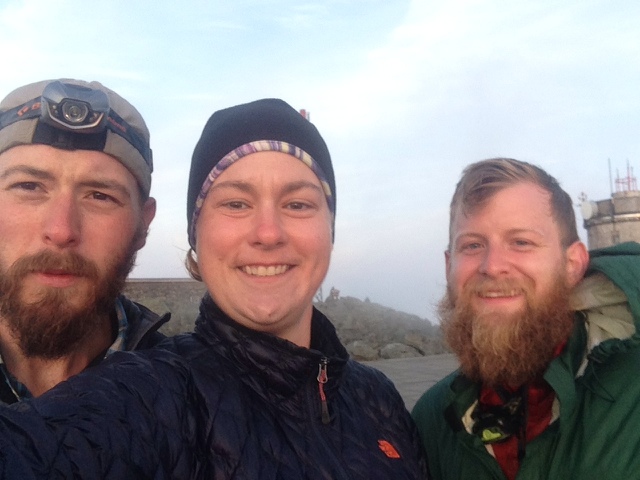 Fiddler, Me, and Adios 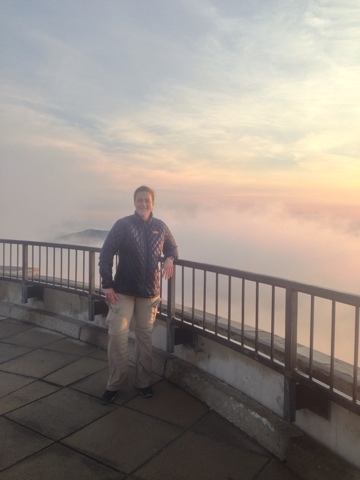 Up in the clouds
We stayed up there for a few hours. Usually the summit is packed with tourists. There is a train and a road to the summit, but we had the place to ourselves. We found a spot out of the wind and charged our phones and I made coffee for everyone. One of my favorite mornings on the trail. 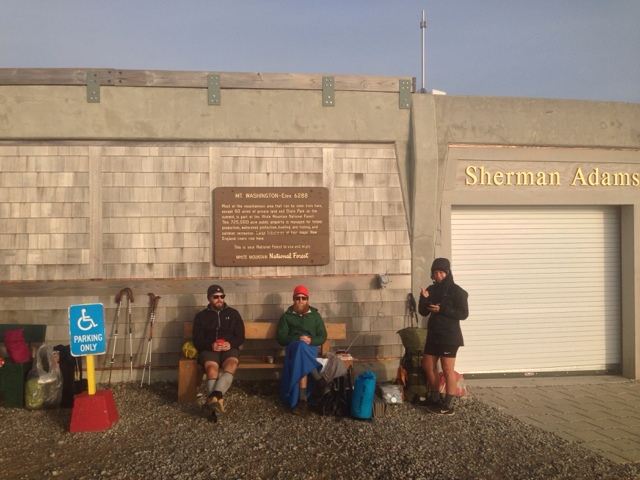 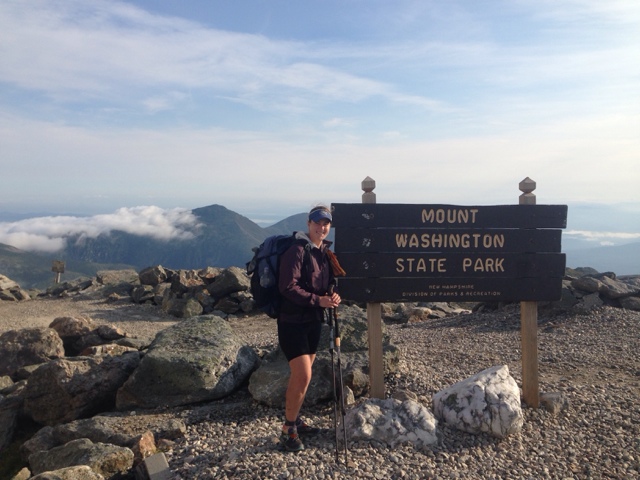 On the way off Washington
Outro has been carrying around a Star Wars kite since Pennsylvania, she was finally able to fly it. 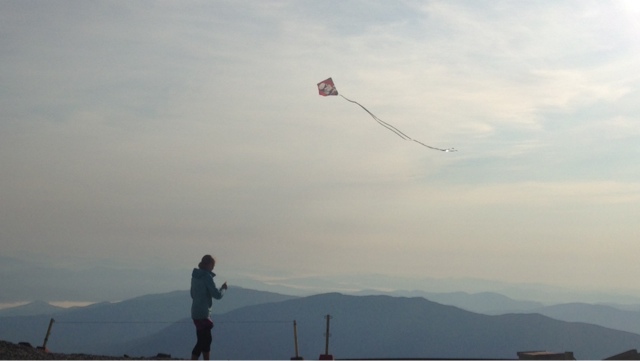 Just before all of the tourists began to file in, we headed out. It is hiker tradition to moon the cog train as it goes by, we restrained ourselves, but just because if you get caught you get fined and put on a list that includes registered sex offenders. 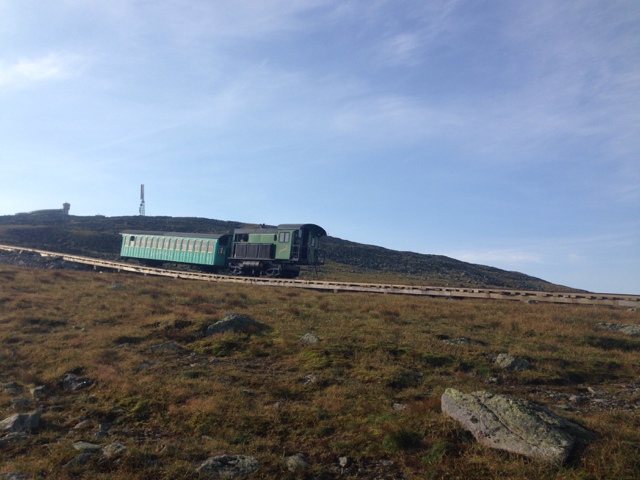 Cog train
The rest of the day was difficult, to put it mildly. For the next eleven miles my feet rarely touched dirt. I hiked up rocks, down rocks, and across rocks. Going down was the worst. I felt like one slip and I could very badly be injured. 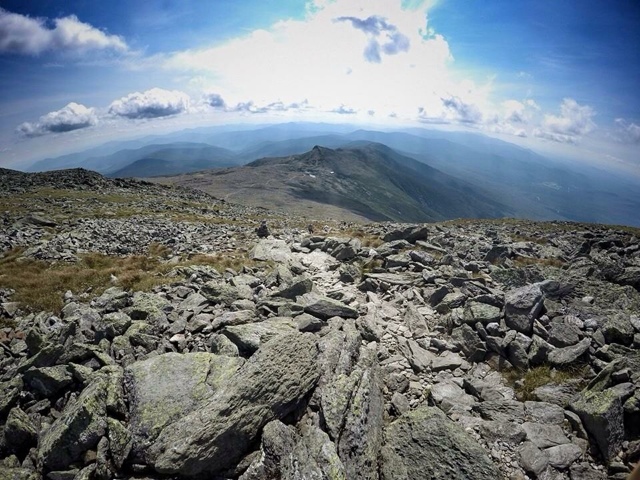 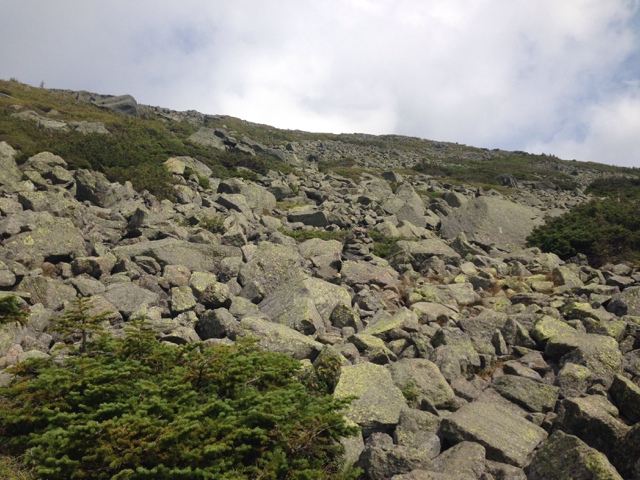 ALL DAY LONG
There's not much to say about the rest of the hike. I walked over and around, Washington, Clay, Jefferson, and Madison. Mt. Washington and Mt. Madison were the only two that I summited. The rocks were miserable and really tore up our feet. Being above treeline all day was fun, but we were very exposed. I think we all got sunburnt to some degree, except me. I'm a Florida girl, my burns turn tan within a few hours. 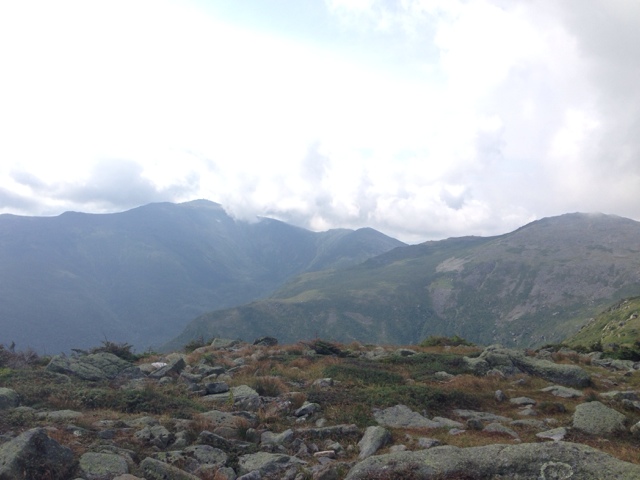 I started the morning on the highest peak to the left and walked the ridge to the right
We stopped for lunch at Madison Spring Hut. We were all so tired we didn't even ask for leftovers. We ate from our food bags and headed back out. It was already 1:30 and we had a very difficult 7.8 miles to hike. We would lose over 3,200' of elevation. Did I mention that it was over rocks?
I carefully picked my way down and managed not to fall. I was very pleased with myself and I was just starting to get my confidence back. I have fallen everyday since I've gotten into the Whites and these kind of rocks are my kryptonite. I successfully made it back below treeline, the rocks didn't disappear, but they became more manageable. It took me over two hours to go 1.6 miles.
The rest of the hike was steep and my knees were very angry by that point. I think today was the hardest day of my life both physically and mentally. I resembled the walking dead and I still had a few more miles to go. I took a quick snickers break and tried to pump myself up for the last four miles. I was jamming out to my music and walking fast, when I had to cross a small stream with slick rocks. I wasn't thinking about where I stepped and I fell...d$@n it. 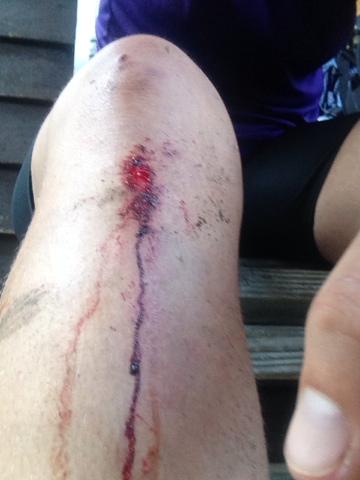 Ouch
I quickly picked myself up and trudged on. I finally made it to Pinkham Notch at 6:30, my longest hiking day yet, 13.5 hours. We were all tired, hurting, and beat down so we called a hiker hostel/cult to come pick us up. The Twelve Tribes are wonderful, very nice people. They are called a cult by the hiker community, but it is mainly in jest. They have several communities throughout the US. The locations that are close to the trail open their doors to hikers. They feed and clothe us, and they don't ask for anything in return. I was very glad to sleep in a bed and get a hot shower. I've never felt so beat up after a day of hiking, but the Presidential Range was well worth the blood, sweat, and tears.
"Some of my best teachers have been unkind people who have helped me feel the pain that can be caused by thoughtless words and actions. They have helped me see that part of me that can also be unkind" - Dalai Lama
If you are interested in reading more blogs check out South Paw's, sailthetrail.wordpress.com
Or Outro's; brisko.weebly.com
Posted by Yoda at 7:49 PM