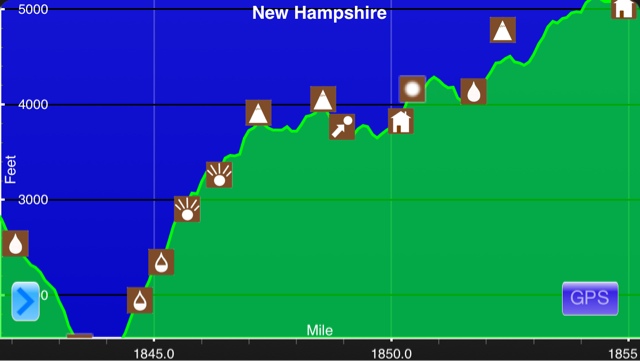 The Whites are kicking my ass! I hope everyone can forgive me for not posting for a couple of days. Usually if I don't post it's because I don't have the cell service to do so, but this time I was too exhausted to even write anything. It took everything in me to just setup camp, cook dinner, and go to bed. I'll try to do my best to remember all of the details from this day.
It was really warm last night. I woke up several times throughout the night to take clothes off, eventually I had to get out of my sleeping bag. Everyone was up at the same time this morning. I think we were all nervous to begin our climb up and into the Presidential Range, but we were also excited to get to Lake of the Clouds Hut.
The first five miles of the day was really difficult. Most of the climb was either ridiculously steep, or hand over hand rock scrambles. At one point I put my hiking poles away because they just got in my way. 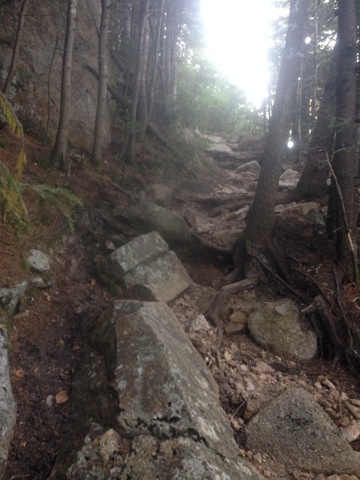 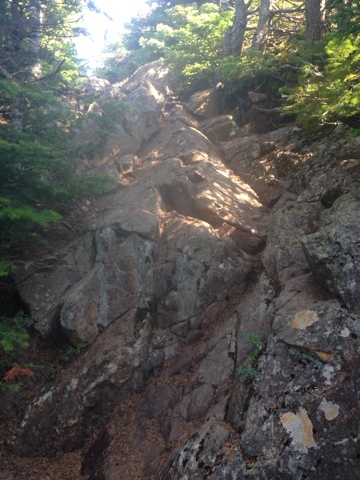 Hand over hand boulder scramble
By the time I reached what I thought was the top of Mt. Webster, I was exhausted and drenched in sweat. The goods news was the views were incredible, the bad news was I had only gone 1.4 miles, I still had over a mile to go before the true summit. 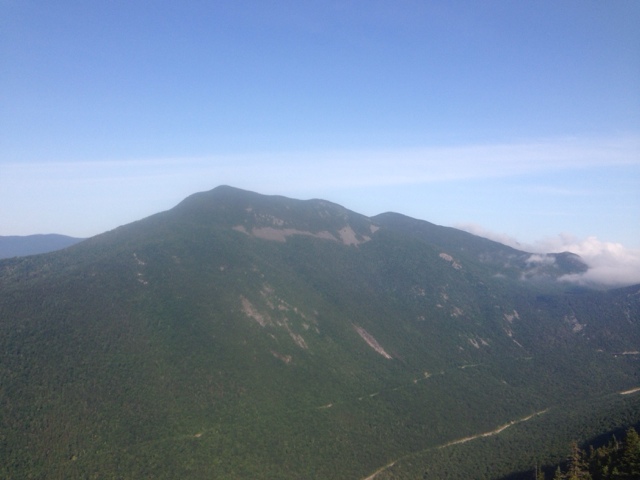 View from Webster Cliffs
For the next half a mile I would pop back out onto a cliff and get the same view, but from higher elevation. 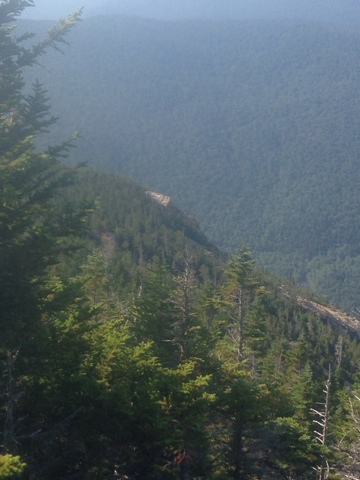 View back down to the first cliff ledge 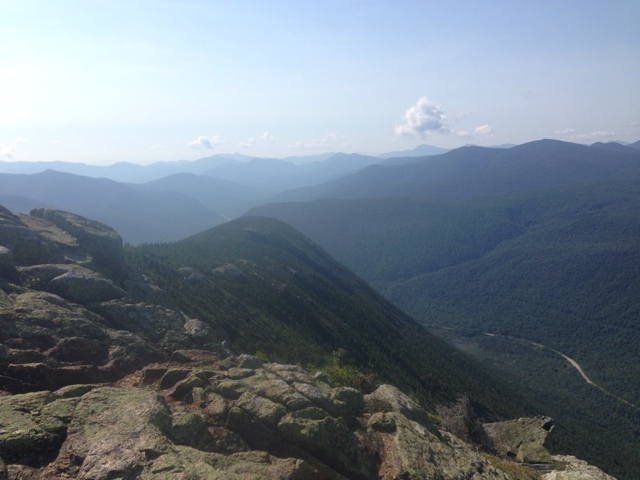 View from the top of Mt. Webster
To get to the top of Mt. Webster we gained 2,800' of elevation in three miles. The day had just begun, but it was already really hot and humid. We also still had a long uphill climb ahead of us. Immediately after leaving Mt. Webster we walked a ridgeline to Mt. Jackson. I really enjoy being up on ridgelines, but in the heat of the day I quickly drank all of my water and I wasn't very close to another water source. 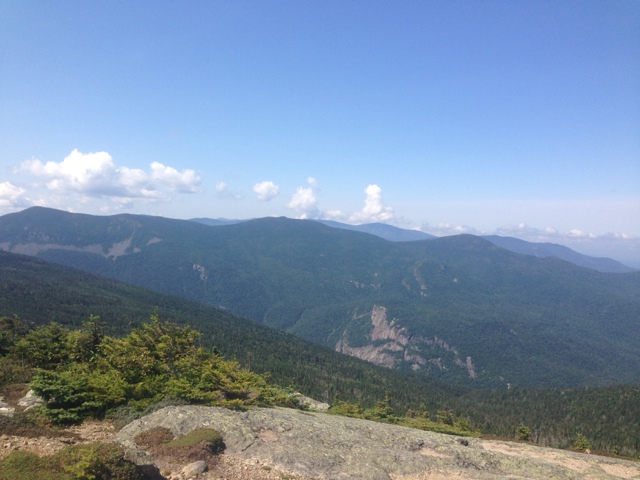 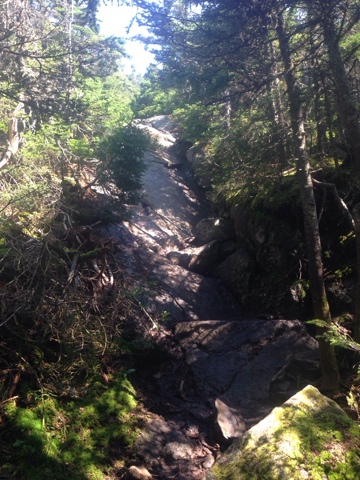 Climb up to Mt. Jackson
Leaving Mt. Jackson was one of the few times all day that I went downhill and it was only a few hundred feet. Since I was out of water I was ecstatic that I came to Mizpah Hut. The huts all have running potable water. I filled up and chugged down a liter. The hut also had leftover diner from the previous evening. I was able to choose from pork or chicken parmesean. I ended up having two big portions of each.
The rest of the hike I spent in a trance/food coma. I would gain another 1,400' of elevation, but it was spread out over five miles. Shortly after leaving the hut I officially began the Presidential Range. It begins with Mt. Eisenhower and continues for twelve miles to Mt. Madison. The entire mountain range is above treeline. I spent the next few hours tripping and stumbling because I wanted to look around. Eventually I was resigned to looking at my feet so I didn't fall flat on my face over all of the rocks. I did take several breaks just to stare off into the distant mountains. 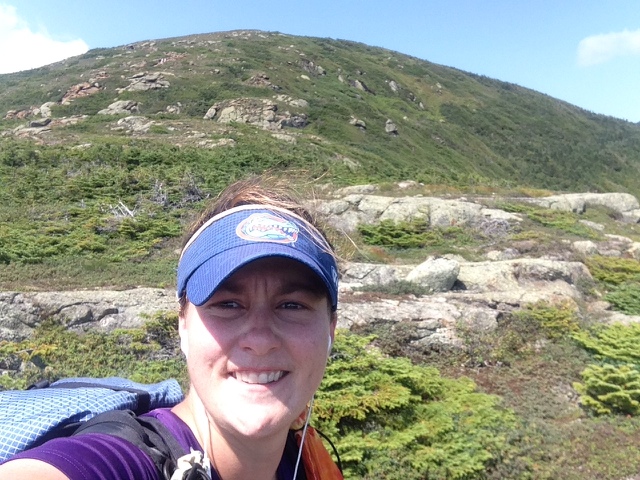 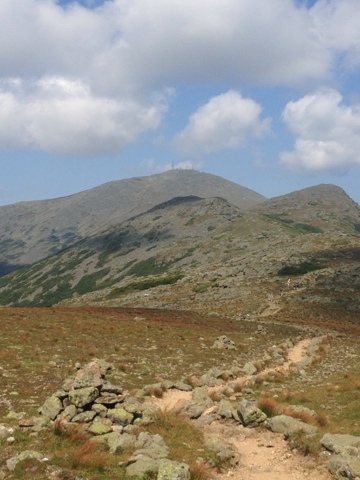 Presidential Range, Mt Washington visable in the distance
The trail went around Eisenhower, summited Franklin, and went around Monroe. The views were so amazing and I had cell service, so I called home. Unfortunately my mom was out, but I was able to FaceTime with my dad. I always try to FaceTime with someone so I can share the view. 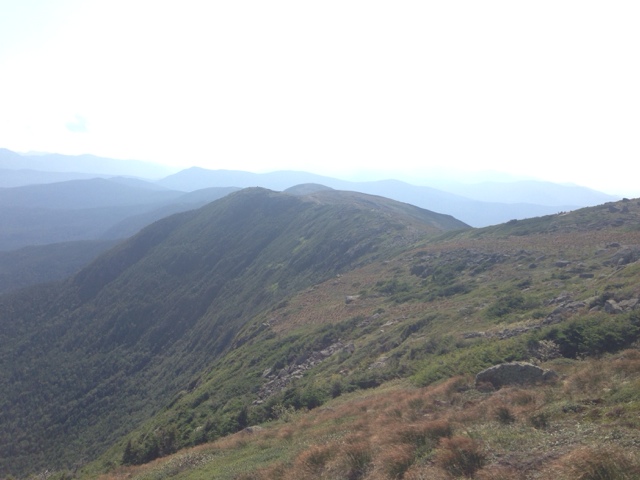 Is this real life?
Eventually I reached our stopping point for the day, Lake of the Clouds Hut. To get Work For Stay(WFS) can be a little tricky. Timing is everything, and we arrived a little too early in the day. We sat just out of sight of the hut and waited until 4:30 before we walked down. We were absolutely positive that they wouldn't turn us away. That late in the day we literally had nowhere else to go. We were above treeline, which is off limits for stealth camping, and only 1.3 miles away from Mt. Washington, which has the most unpredictable weather in North America. Unfortunately, The Texas Hiking Family(a group of 7, including 5 kids) beat us there. They had sent their oldest ahead of us to hold a spot. They wouldn't even let us stay in the bunkhouse, telling us that we were too early. The bunkhouse, called The Dungeon, costs $10 to stay in. It is a dingy mold infested room, but at this point we were desperate. In the end they fed us leftovers, which were amazing and gave us directions to a stealthsite "close by". We left the hut disappointed that we couldn't stay, but we had high hopes for the campsite. It was supposedly just a little downhill below treeline. We spent over an hour going down a small riverbed that was straight downhill. I fell twice, broke a hiking pole, and was very distraught. We never found the stealthsite, so we had to hike back up to the hut. I left the group behind, walked into the hut and gave them a sob story about hurting myself and breaking my hiking pole. By now it was almost dark out and they couldn't turn us away. They agreed to let us sleep on the dining room floor after all of the paying guests went to bed   For this "privilege" we paid $15 each. I went back outside and gave the signal for the rest of the group to join me. We waited outside in the cold for two and a half hours before we could go to bed. Everybody was extremely mad and upset. After we left the hut the first time, they gave WFS to four other hikers, and allowed six others to stay in the dungeon. We were the only people turned away. 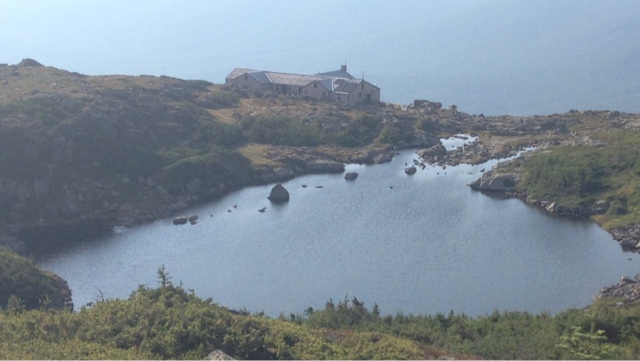 Lake of the Clouds Hut
We tried to make the best out of the situation, but it was difficult. While we waited to be allowed inside for bed, we watched the stars and caught a little bit of a meteor shower. Since I'm in a hammock I don't have a sleeping pad. I took three Tylenol pm, hoping that would help me sleep. It did not. We set our alarms for 4:30 am so we could hike up Mt. Washington for the sunrise. It was satisfying knowing that we would wake everyone up in the morning when we packed up.
"The keys to patience are acceptance and faith. Accept things as they are, and look realistically at the world around you. Have faith in yourself and in the direction you have chosen." -Ralph Marston
Posted by Yoda at 5:19 PM