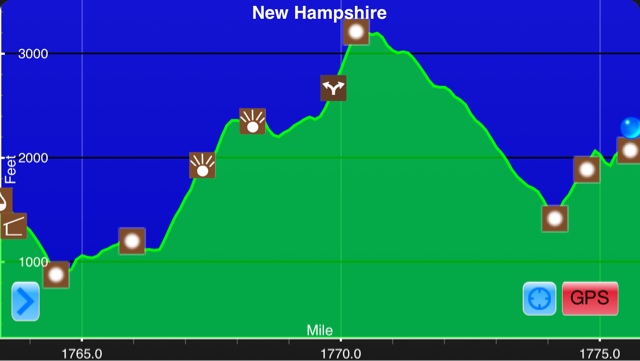 I'm so glad that I got my cold weather gear back and not a moment too soon. The temperature really dropped last night. It was around 49 degrees when I woke up this morning. I am absolutely loving my new Hammock Gear Phoenix 20 degree underquilt. For the first time in four months I was perfectly comfortable last night. Since I only had to hike twelve miles today, I slept in until 7:30. I took my time getting ready and once again I was the last one to leave the shelter. I hiked one mile downhill to, Grafton Turnpike. Right off of the trail there is the home of, The Ice Cream Man, Bill Ackerly. Bill hands out free ice cream to thru-hikers. He wasn't home when I stopped by, but he left a note explaining that the freezer on the back deck had ice cream. He also had a cooler full of sodas for fifty cents. I dumped my trash, had a Mt. Dew, and enjoyed a creamsickle. Life was good! 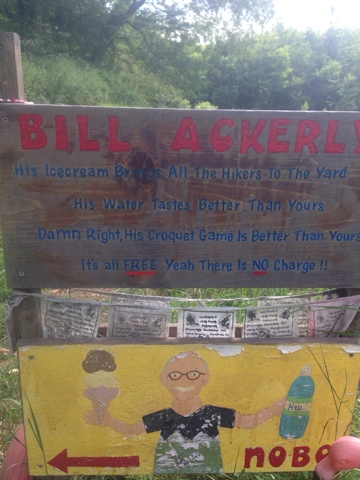 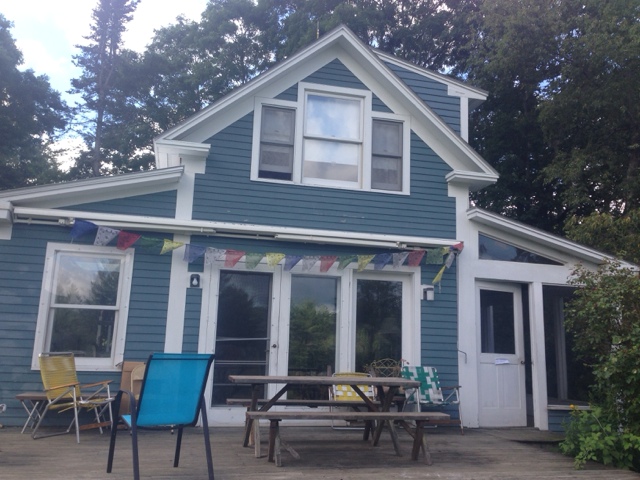 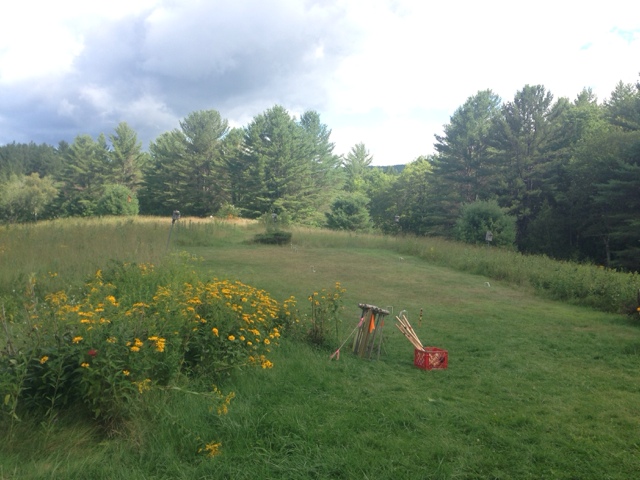 Croquet setup
Just before I left, McFly, Walnut, and Walking Home showed up. I chatted briefly with them before heading out. It was almost 11:00 am and I had only hiked one mile. I only had eleven to go, but it was a tough eleven, with a few steep climbs.
The first climb of the day was up Smart Mountain. I had to climb over 2,000' to make it to the summit. The first half of the climb wasn't too difficult. I passed by two day hikers about halfway up. They seemed amazed by how fast I was going. I asked them if they had a job, to which they said yes. They were in marketing and worked for the same firm. I asked how many hours a week they put in. They seemed baffled by my line of questioning, but eventually answered my question. They said they worked about 45-50 hours a week. I told them that hiking was my job and I averaged roughly seventy hours per week. I told them if they wanted to run up mountains they needed to practice 70 hours a week for four months. They laughed and wished me well. Smart Mountain was broken into two separate climbs. The first part wasn't too bad and I got a great view from Lamberts Ridge. I could actually see the summit of Smart Mountain from there. It looked really far away still. 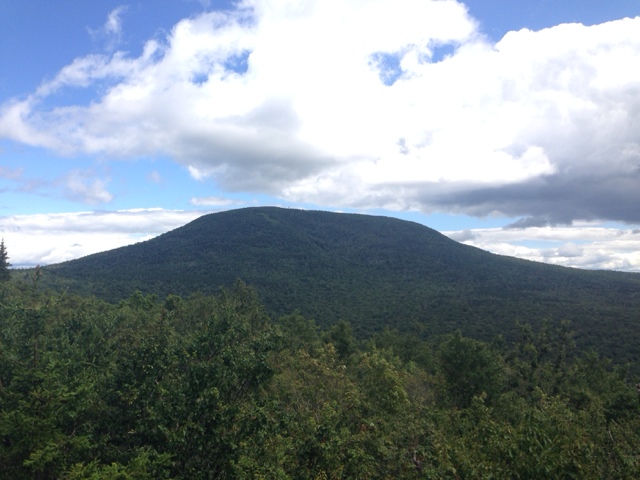 View from Lamberts Ridge
The remaining 1,000' of the climb was spread out over two miles. It was a nice and easy one and a half miles, followed by a torturous half a mile section. As hard as it was to climb, I actually enjoyed it. I have seen pictures of rebar mounted into rock slabs to help climb, but haven't experienced that yet. Well, now I have. 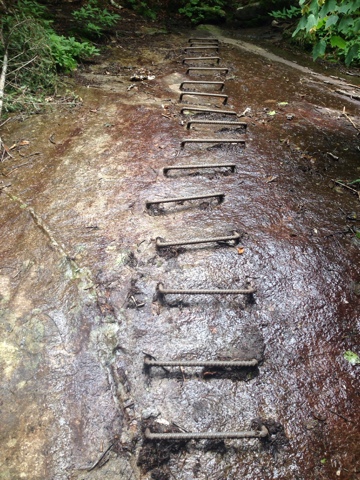 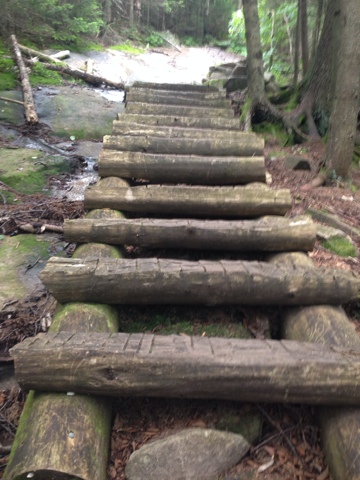 Log ladder
By the time I made it to the top I was drenched in sweat, but smiling ear to ear. It was another beautiful day, in the mid 60's, low humidity, with a chilly breeze, and I had just banged out a difficult climb with ease. In fact today felt more like fall, than summer. I had to put my jacket on at the top of the mountain. 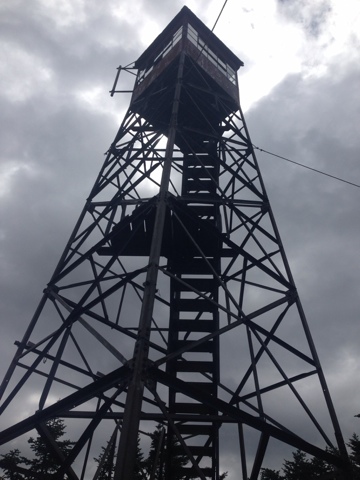 Fire tower was closed, but I still went up 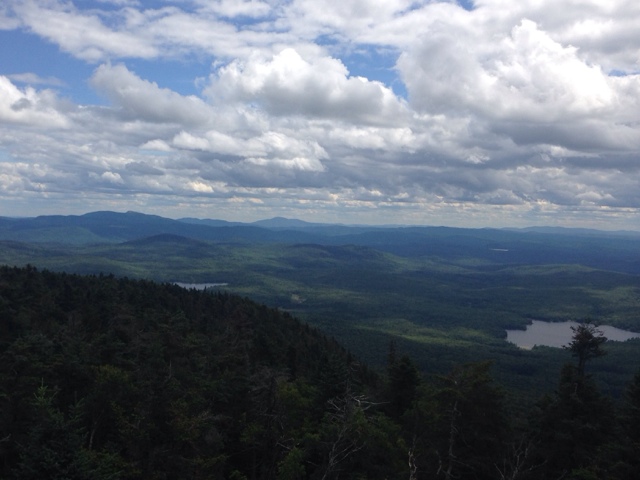 View from opposite side of fire tower
I ate a quick lunch from the protection of the treeline. With the high winds and cooler temperature I was rapidly cooling down, even with my rain jacket on. Lunch consisted of two tortillas filled with peanut butter and honey, with a lemonade to help wash it down.
The next part of my day was a very boring four mile decent. It was a very gradual downhill, but by the end my knees were on fire. After going down for an hour and a half, I climbed back uphill to, Eastman Ledges, where I got a view of where I had just come from. 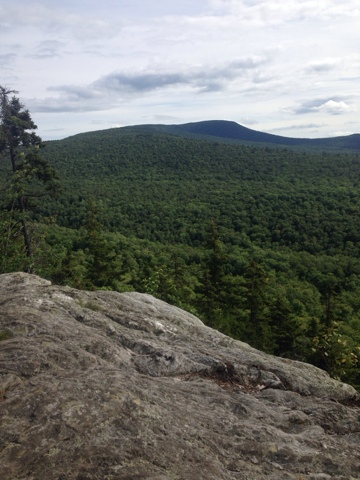 Hard to believe that 1.5 hours ago I was standing on top of that mountain
I took a short break to eat a few snacks before moving on. The steep climbs of the day had really burned some calories and I was starving all day long. The shelter wasn't too far away, so I didn't linger for very long. Of course the shelter was at the top of another uphill climb, but I was really enjoying the weather and my new audiobook, Ready Player One, so it went by quickly.
I setup camp as soon as I got to the shelter. Usually I'll sit and talk for a little while, but I was starving and wanted to cook dinner as soon as possible. I ended up eating two dinners, one Mac and Cheese with pepperoni, and one rice side dish. I also had a snickers bar and some peanut butter crackers with honey. I was still hungry, but I didn't have any extra food to eat. Eventually, Walking Home, McFly, Walnut, Old Eagle Scout, and Happy showed up. We had a really nice time hanging out, cooking dinner, and eating together. Tonight will be in the mid 40's and I'm pretty stoked about that. I can't wait to see how the underquilt performs. Right now I'm almost too warm, so I think it's going to be another great night.
"The unexamined life is not worth living"
- Socrates
Posted by Yoda at 6:41 AM