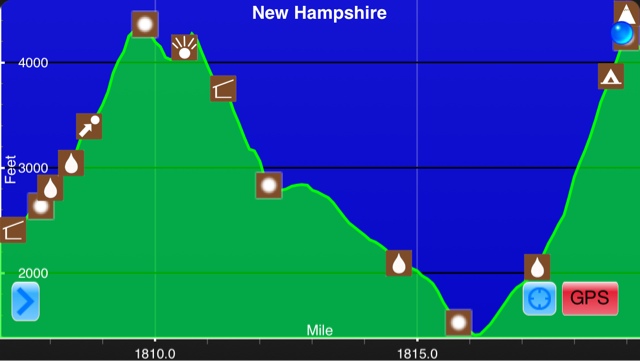 Today did not start off very well. I had one of my lowest days on trail, but I also had one of my best days. We were all up early this morning. We ate breakfast, got packed up quickly, and were on the trail by 7:00. The morning started off with a sketchy stream crossing, but somehow I managed to keep my feet dry. It was a short lived success though. About a mile down the trail we had to walk through ankle deep water, there was no option to go around it. Oh, man was that water cold. My feet remained cold and wet all day long. The trail leading up Kinsman mountain was no picnic either. At points it was more of a stream than a trail. Not to mention that the forecasted partly sunny day never materialized. I hiked in a cloud with rain off and on all morning. To make matters even worse,, the climb up was more mountain climbing than hiking. I gained 2,000' of elevation over two and a half miles by putting my hiking poles away and scrambling up sheer rock faces. 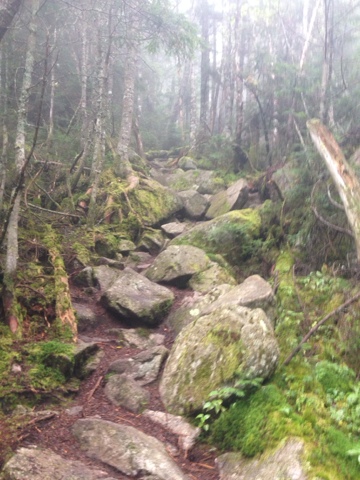 Easy part of the climb 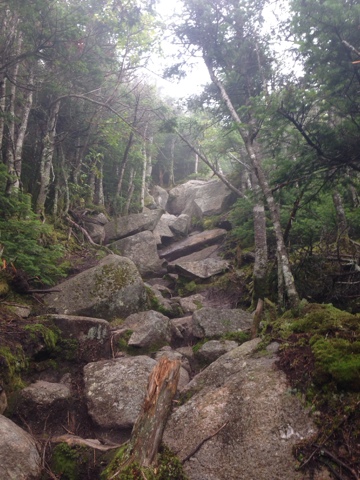 Two miles of this
By the time I reached the first summit I was cold, wet and cranky. South Kinsman was supposed to be a fantastic view, but I couldn't see anything. 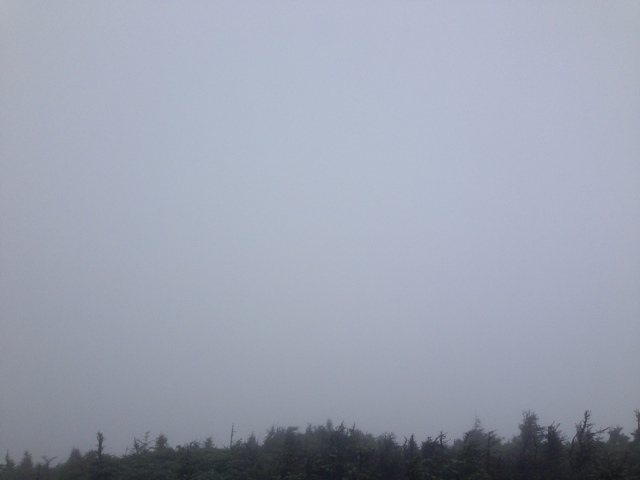 Not exactly the epic view I had hoped for
I didn't even bother checking out the view from North Kinsman. The only cool thing I saw from Kinsman mountain was a rock cairn/chair. 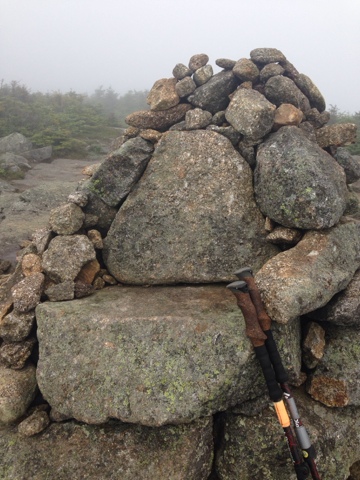 Dual purpose rock cairn
The climb down Kinsman was treacherous to say the least. It took me two hours to go two miles. 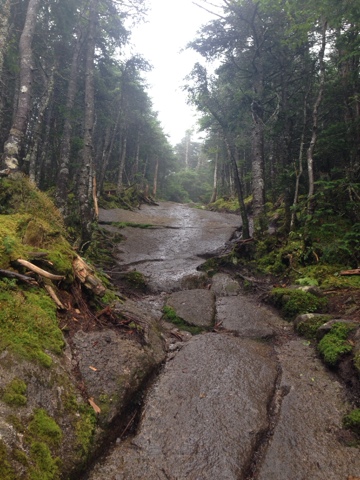 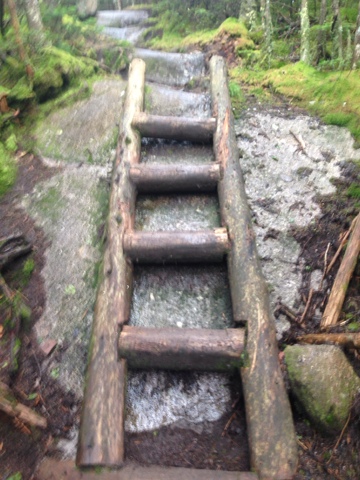 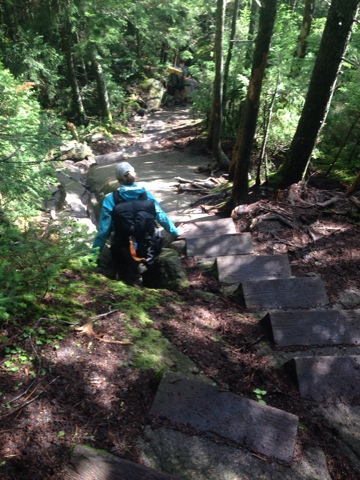 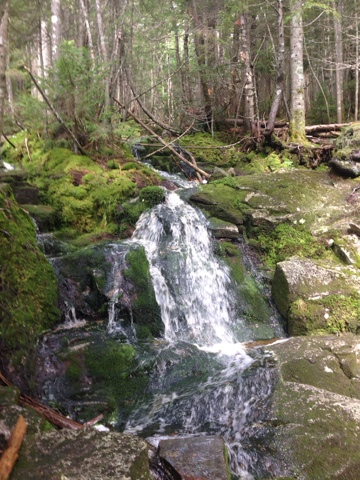 Waterfall across the trail
By the time I made it to the hut at Lonsome Lake, I was in a very foul mood. Outro, Adios, and South Paw were already inside enjoying a nice hot bowl of soup and free leftovers. One of the nice thing about the AMC huts is that if you show up at the right time you get free leftovers or you can buy a bowl of soup for two dollars, refills are only one dollar. I wasn't in the mood to eat, so I just had a cup of coffee. 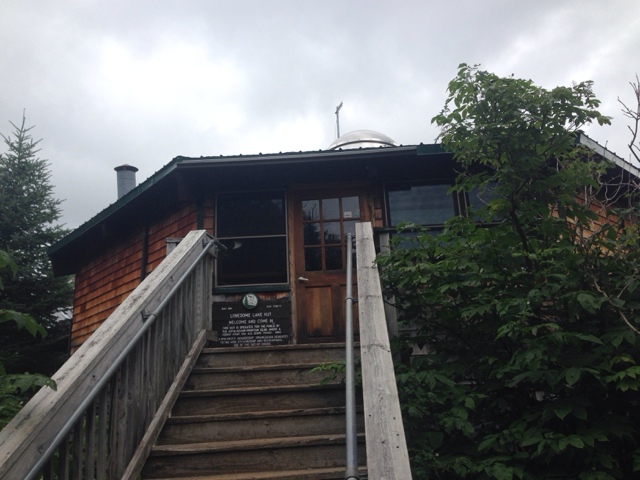 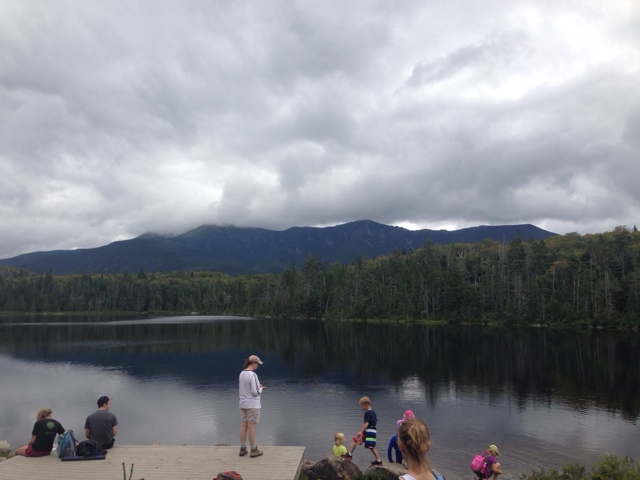 First view of the day, Lonesome Lake
After my hot cup of coffee I was feeling a little better. We didn't linger at the hut for long. It had taken us over four hours to go less than six miles. We still had another six to go. The descent from a Lonesome Lake wasn't too bad. We made really good time and my mood was improving. I managed to stay with the group and I think that helped me emotionally. I didn't feel like I was the only one struggling through the day.
After crossing underneath, I-93, we had to climb up Mt. Liberty. It was a tough climb, but at least it was hiking, not rock climbing. We went up for 2.6 miles and gained almost 2,000' of elevation. By the end of the climb, we were all exhausted. The AMC manages a camping area just before the summit, but they charge eight dollars to camp there. We didn't feel like paying eight dollars just to camp, so we pressed on. Camping in the Whites is very difficult. You really only have a few options; you can pay eight dollars to stay at a campsite or shelter, you can stay at a hut for free if you can get a work for stay spot(difficult to get), you can pay $125 to stay at a hut(no chance of that), or you can find a stealth spot(also difficult). I have a list of stealth spots that I got from a previous thru-hiker. We used that list to find our spot tonight.
We made camp at 4:30 and had plenty of time to get our camp chores done before sunset. Since we are camped .2 miles from the Mt. Liberty summit, after dinner we went to the top. We weren't very hopeful that we would see anything, but just as we got to the top, the clouds cleared and the sun came out. 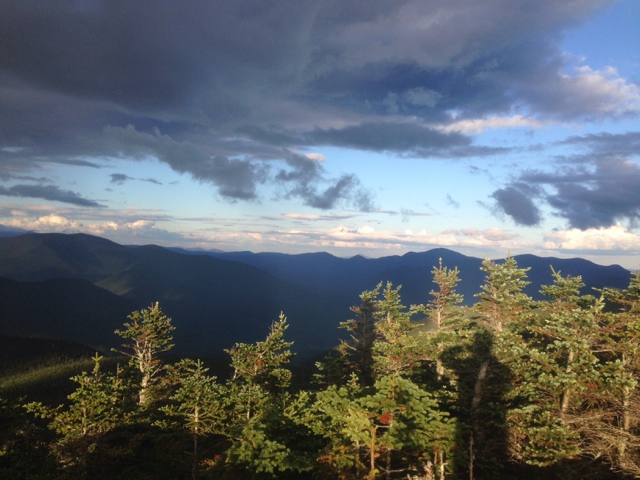 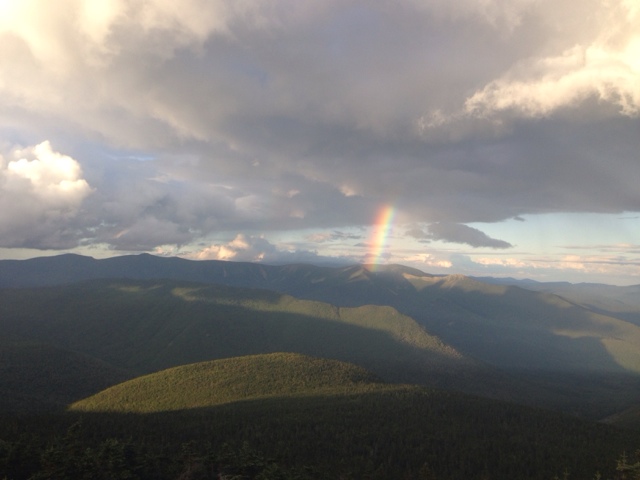 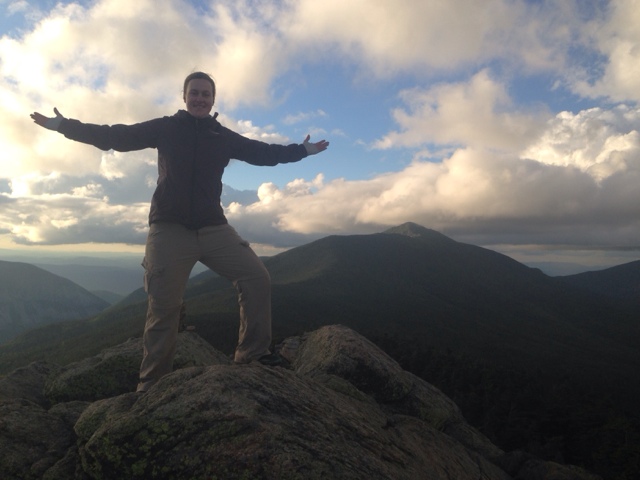 Mt. Lafayette in the background 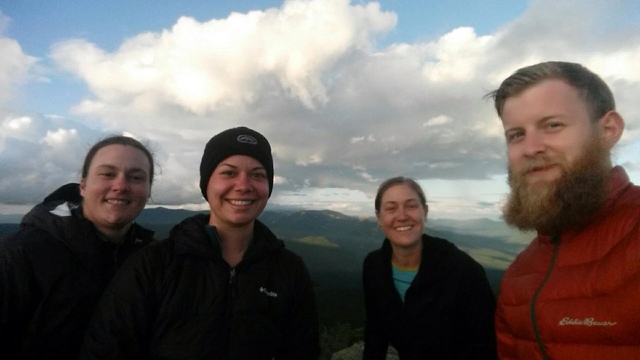 Me, South Paw, Outro, and Adios 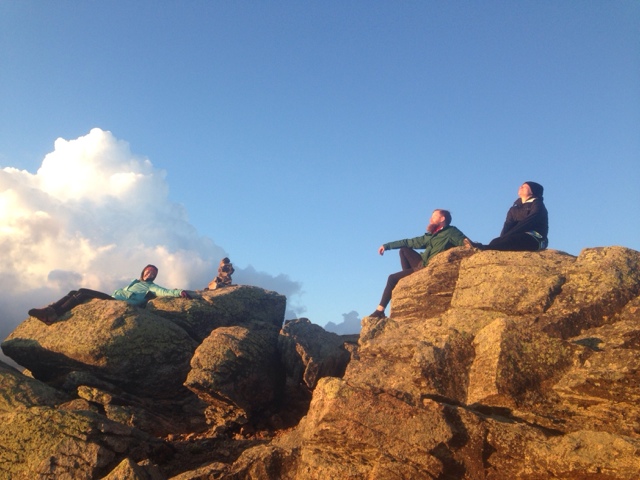 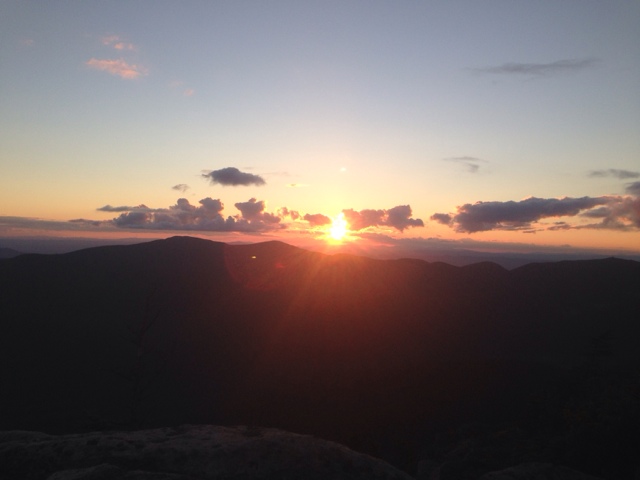 Sunset over Kinsman Mountain
Today I felt the lowest of lows, and the highest of highs. The weather tomorrow should be nice and we have some epic views ahead of us. Our mileage has dramatically decreased, but we are still having fun and enjoying ourselves. It helps that I'm hiking with three amazing people, who love to laugh.
"One of the secrets of life is to make stepping stones out of stumbling blocks."
— Jack Penn
Posted by Yoda at 11:28 AM