Aug 18, 2015
Pinkham Notch(1869.8) 0 Miles
The White mountains have lived up to the hype, they are no joke. After a very long, difficult, dejecting day we decided to take a break. After arriving at the hostel last night I was considering taking a zero day, but I was worried that the group would move on without me, so I kept my thoughts private. We were all exhausted, dirty, hungry, and ready for bed. Usually, the first order of business when coming into town is to take a shower, but because it was getting late we went to find something to eat. The only thing still open was a McDonalds a quarter of a mile down the street. We wearily made our way there. Our group has grown to six people; myself, Outro, Adios, South Paw, Fiddler, and Neemor. We ordered a ridiculous amount of food. I had a triple bacon cheese burger, large fries, 12 piece chicken McNugget, McFlurry, and a large coke. That was the smallest order of the group. After dinner we walked back to the hostel. We had split into groups of two or three on the walk back. Adios and I started talking about zeroing and I think the others began to discuss it as well.
We settled in at the hostel and everyone got in line for the shower. Outro went first, while she was showering, South Paw, looked at me and announced that she was taking a zero. I told her that Adios and I had already talked about it and we were in. That was half of the group. South Paw also said that Fiddler and Neemor were in as well. We didn't know what Outro was thinking, but we felt pretty confident she would stick with the group. After she got out of the shower we broached the subject with her. She didn't seem to excited by the idea, but as expected she went along.
We all slept in, which meant that we laid in bed quietly until seven. Everyone, including Outro, was excited for our much deserved rest. We ate breakfast, cooked for us by the Twelve Tribes, and enjoyed a leisurely morning. We decided to get our town chores done immediately so we could spend the day relaxing. By relaxing, I mean eating at every restaurant in town. We went to do laundry first. We combined everyone's clothes into an industrial machine at the laundromat. While we were waiting for the washing cycle to finish we walked to the Outfitters, Simon and Tanner, which is owned and operated by the Twelve Tribes. South Paw and Fiddler both bought new shoes and the rest of us browsed the shelves.
Once the wash was done we got everything into the dryer and hung around in the laundromat playing on our phones and joking around. Eventually the ice cream shop next door opened. Hikers will never turn down ice cream no matter what time of day it is.
By the time we had finished our giant ice cream cones, the laundry was done. We took it back to the hostel and tried to decide what to do next. It didn't take us very long to decide that it was time to eat again. The Irish pub down the street was getting ready to open for lunch, so we headed over. We had a mediocre meal there, but the beer was cold and the company was good. 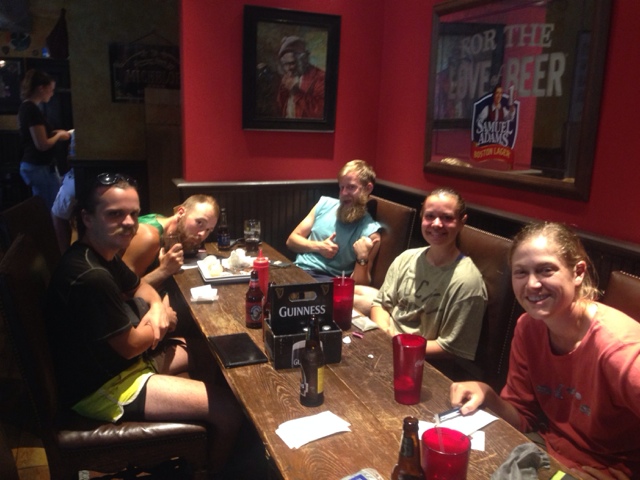 Neemor, Fiddler, Adios, South Paw, and Outro
After lunch the group split up for a little while. Everyone had different chores to accomplish. Outro headed off for the library, while everyone else went to Family Dollar. I picked up some toothpaste and nighttime ibupfren. From there, South Paw, Adios, Neemor, and I went to Dunkin Donuts. South Paw and I got a few donuts and a latte to enjoy while we used the free wifi. Thanks, Lora and Pete, for the DD gift card.
Once again I was way behind on posting my blog. I headed back to the hostel to finish the two I was behind on. Eventually everyone finished their chores and filed back in. I was planning on going to the movies with Adios and Neemor, but in the end I had to skip it. I hadn't finished my blog yet and I hate disappointing people when it's not posted. The members of the Twelve Tribes take turns hosting each other for dinner every night. We were invited for dinner and everyone else went. I chose to skip it, so I could finish writing. Once I was all caught up, I walked to Subway and had a footlong steak and cheese with chocolate milk and a bag of chips. I even bought an extra 6" to pack out for lunch tomorrow.
It was a very busy, but relaxing day. Everyone is excited to finish up the last twenty one miles of the Whites. It should take us two days to accomplish that. The hostel offered to slack pack us, but half of the group, including me, are purists. We all agreed not to slack, but we are leaving extra clothing, food, and miscellaneous gear items at the hostel. My pack is a little lighter than usual, but I'm only leaving extra food behind. It's as close as I've ever come to slack packing. After we finish, The Wildcats, the last part of the Whites, we will stay one more night at the hostel before we finish New Hampshire and begin our last state, Maine.
"Don't let the behavior of others destroy your inner peace" - Dalai Lama
Posted by Yoda at 4:55 PM