Aug 3, 2015
Hanover, NH(1747.8) 0 Miles
Hanover has been a great town to cool my heels in. The food and beverage choices are outstanding. When I woke up yesterday I discovered that I still had one bottle of beer leftover. There was no way I was going to carry that around town all day, so I had it for breakfast. Once I packed up all of my gear, Oscar Mike and I went in search of a proper breakfast. We ended up at a place called, Lou's. We picked it because they give thru-hikers a free donut. I was pleasantly surprised to see Stink Jacket and Pacman there. We all ate breakfast together. Just as we finished eating, I ran into Lil Freebird. One of the things I like best about going into town is seeing all of my friends. You just never know who you will run into!
After breakfast, the boys and I, went to the Richard W. Black Senior Center. They allow hikers to do laundry and take showers there. It's a great deal. For only $5, I showered and did my laundry. It was nice to feel human again. They only had one shower and laundry facility, so it was a long process. Once our town chores were complete we went in search of lunch. We ended up going back to the pizza place. Once again they gave us a free slice. Oscar Mike and I hung out there for quite awhile. They had a really good beer selection which helped us kill some time.
After lunch we hit up the post office so I could pick up my package. I was looking forward to getting this package, but dreading it at the same time. Mom and dad had sent me a three day food resupply, which was great. They also sent me my new underquilt, which was awesome. I also received my cold weather clothes back. That sucks!!! I'm looking forward to the cooler days, but with the quilt and clothes my pack weight just went back up. I'm not looking forward to carrying around extra weight for the hardest part of the trail, but there is no way around it. The weather in, The Whites, is wildly unpredictable. With the higher elevations, I'm sure the extra clothing will eventually be much appreciated.
As we were leaving the PO a thunderstorm rolled in. We took refuge inside a bar to wait it out. While we were waiting for the rain to stop, we began calling trail angels to find a place to stay for the night. Unfortunately, we weren't having much luck. A lot of the people on the list were out of town on vacation. Others didn't have room for four hikers and we wanted to keep the group together.
We decided that worse case scenario, we could camp by the soccer fields again. We went back to enjoying our drinks and put the issue on hold. Stink Jacket had struck up a conversation with the guy sitting next to him. As it turned out the guy was really interested in trail life. He began peppering us with questions. He asked where we stay when we go into towns. We explained that it's usually hostels or hotels, but Hanover doesn't have affordable lodging for thru-hikers. We told him about the trail angels and how we couldn't make it work with them. Without hesitation he offered to let us stay at his house for the evening.
We weren't really sure what to do, but at that moment he got a phone call and stepped outside to take it. We asked the bartender if she knew him. She said that he was a really nice guy. With her seal of approval we all agreed to accept his offer. Safety in numbers, right?
Charlie turned out to be a really good guy. He took us to a grocery store to pick up some drinks and to buy something for dinner. As we were looking around he declared that he would cook for us. We offered to pay for the groceries, but he wouldn't allow it. Once we got to his place, he got us settled in and started dinner. It wasn't much, spaghetti and ground beef, but definitely an awesome gesture. By now you have all heard about hiker hunger, well Charlie was amazed at how fast we ate our dinner. It was a good thing we bought snacks. Not only did we wolf down the pasta, but we each had a bag of chips, and a few sleeves of Oreos. I seem to remember having a few donuts as well. Charlie was in awe of our eating habits.
Stink Jacket and Pacman slept on the couch, which meant that Oscar Mike got his own room, as did I. I'm always a little nervous about how the sleeping arrangements will work and this couldn't have been any better. I got a great nights sleep and felt refreshed this morning.
Charlie's brother lives down the street. Apparently he raises chickens, so Charlie stopped by and got fresh eggs to cook us breakfast. I've never had eggs that fresh before. They tasted delicious. I might have to start raising chickens when I get home. I'm sure the neighbors would love that.
Once we were fed, Charlie took us back to town. Even after all the kindness from strangers that I have experienced, I'm still shocked when it happens. Would you ever consider allowing four perfect strangers into your home? How about feeding them and driving them around town? It is just amazing!!!! 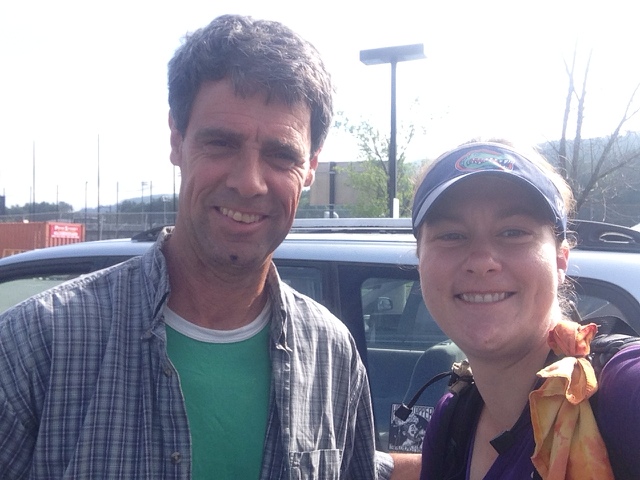 Charlie and I
"It is not so much for its beauty that the forest makes a claim upon (people's) hearts, as for that subtle something, that quality of air that emanation from old trees, that so wonderfully changes and renews a weary spirit." -Robert Louis Stevenson
August 4, 2015
Still in Hanover, NH(1747.8) 0 Miles
Yup, still in Hanover. I have explored so much of this town, that I think I might apply for residency.
After Charlie dropped us off this morning, it was time for us to go our separate ways. Stink Jacket and Pacman were planning on doing a twenty mile day, so they hit the trail right away. Oscar Mike and I hung around for a little while, but eventually it was time for him to move on as well. I know people(mainly my brother 5-0) likes to hear how people get their trail names. Pacman is from Wisconsin and is a huge Packers fan. Stink Jacket has a really smelly jacket. Oscar Mike is the military term for On The Move. He really liked the sound of that, so he took it as his trail name. I probably won't see Stink Jacket and Pacman for the rest of the trail. I wish them luck and hopefully our paths will cross again(PCT next year boys?). Oscar Mike has a little bit of a slower pace, so I'm hoping we will see each other farther down the trail.
I'm a pretty independent woman, so I was excited to get some town time to myself today. I went back to the PO to send a few things home. I had to try to offset my winter clothing somehow. I have been threatening to send my headlamp home forever, well I finally pulled the trigger. Hopefully it was the right decision. I've only used it once this whole trip. Worst case scenario, I always have the flashlight on my phone. I also sent away some of my summer clothes and the used pages from my trail guide. I think I managed to dump 1.5 lbs. I feel pretty good about that.
The next order of business was a trip to Starbucks. Thanks Danielle and Brian for the gift card. I enjoyed a Venti caramel iced latte while charging my electronics and using the free wifi. I talked to my dad, my mom, and finalized plans to meet my aunt and uncle on Friday.
Once everything was charged up, myself included, I wandered down to Subway for lunch. Thanks, Cynthia for the gift card. A wolfed down a footlong steak and cheese with extra veggies, then went looking for the library. I spent over three hours there answering emails from blog readers. I had quite the backlog. Thanks to everybody that has emailed me. Sorry for the delayed responses. I try my best to answer you as soon as possible, but sometimes it gets away from me.
I'm running out of ways to kill time in this town. I've eaten at most of the restaurants and I'm more of a social drinker, so I didn't hit up any bars today. I was going to go explore the campus, but a storm was rolling in again. I decided to post back up in Starbucks to wait it out. I opted for an ice water this time around. I'm not used to drinking so much caffeine and after a few days of drinking beer I was starting to get dehydrated. I downloaded a new audiobook, Ready Player One,  to listen to while hiking. Thanks to, Brigid Grace, for the suggestion. I downloaded a few new songs to listen to as well.
By now it was getting late in the day, so I headed back to the soccer fields to setup camp. I was really excited to try out my new underquilt. I got it setup pretty quickly. I was a little anxious about how it would work, but I'm pleased to report that it is awesome. It was much easier to use than I expected and it is fantastic. I can tell a big difference already. It's 58 degrees right now. Usually that is cold enough for me to wear my puffy and tights to bed, but I'm only in shorts and a tee shirt tonight. I'm not even in my sleeping bag. I can't wait to see how it works in the Whites. Thanks again, Anthony, Lauren, Liz, Tom, Mom, and Dad!
The good news is that my crew has finally closed the gap. I'll hike out tomorrow so I can meet my Aunt and Uncle on Friday and my friends will hike in tomorrow. After their zero here, we will meet up on Sunday in Glencliff, NH. Well that's the plan, hopefully it works out. I can't stand sitting around any longer. I'm looking forward to starting The Whites.
"Still round the corner there may wait, A new road or a secret gate." -J. R. R. Tolkien 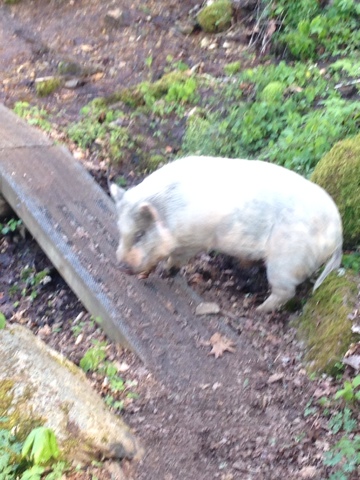 Blast from the past
Posted by Yoda at 9:42 PM