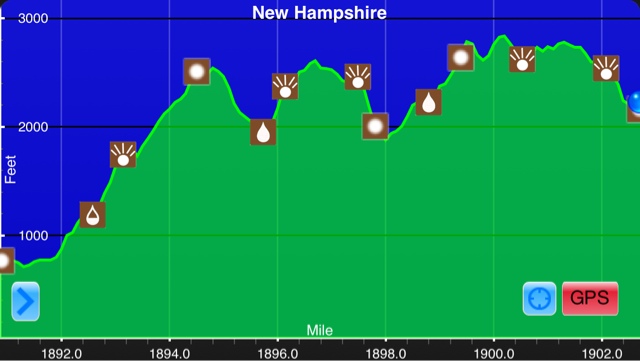 I did not sleep very well last night. It was probably a combination of things. The hostel was located right on US 2, which is a very busy road. I kept waking up every time a big truck went by. I was also anxious to get hiking again. I wasn't sure if my ankle was ready to get going again, but I sure was. I woke up at 3:30 and slept off and on until 5:45. When I finally got up the only other person awake was Airlock. I took a shower and walked down the street to meet her for breakfast. I ordered two chocolate chip banana pancakes and a cup of coffee. The pancakes were enormous. I ate one there and saved the other one to eat on the trail. As we were eating, 2 Bad Dogz, came in. We chatted with them for a little while before heading back to the hostel. We only had a few minutes to get packed up and ready to go before our shuttle was ready to leave. I got dropped off at Hogan Rd, where I got off a few days ago, but Airlock and Cruise Control had to go back to the US 2 trailhead parking lot.
As I started hiking my ankle was really sore, but I had expected that to happen. What I didn't expect was how sore my knees and calfs were. After sitting around for three days my whole body had tightened up. There is nothing like a 2,000' climb to get your muscles loosened back up though. The terrain was ok at first, but then it quickly shifted from dirt and roots, to exposed slabs of rock. I had a tough time getting enough traction on the wet rock. I ended up having to put more weight on my ankle than I would have liked, but it worked out ok in the end. The weather forcast called for rain most of the day and it began halfway up the mountain. It wasn't enough rain to get me soaking wet, but it was enough to make all of the rocks really wet and slippery. 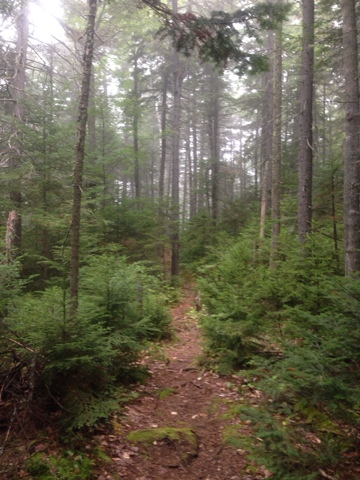 Hiking through a cloud 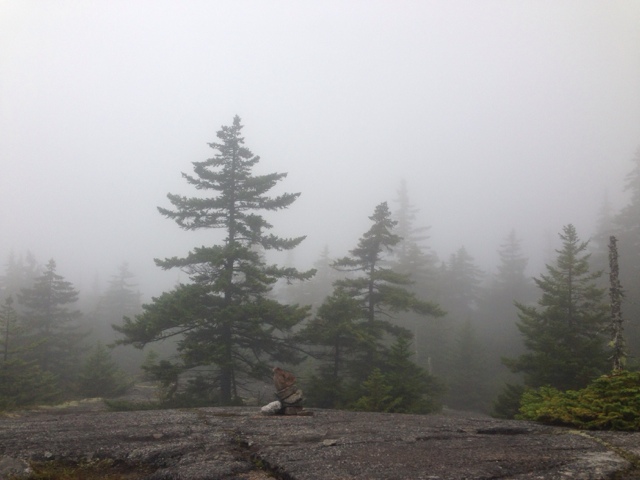 View from the top
It didn't take very long for Airlock and Cruise Control to catch up to me. After climbing up Mt. Hayes, the trail began to go downhill. As I was carefully making my way down, I heard, "Hellllllooooo," from behind me, it was Airlock. I have really missed hearing our trail greeting for one another. I wasn't the least bit surprised that she had caught up to me so quickly. As Iron Lady put it a few days ago, "I'm a broken machine."
We didn't hike together for very long. Instead we flip flopped back and forth all day. Airlock and Cruise Control move pretty fast over wet slippery rocks, but I was still a little faster than them going uphill. Every hour I tried to stop and take a break to let met ankle rest. 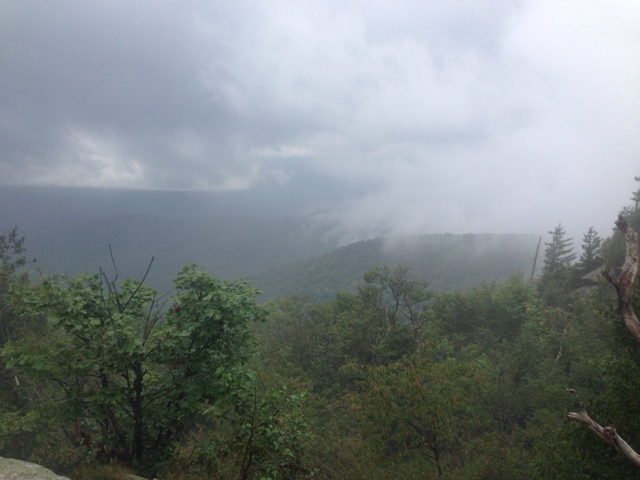 Reminded me of Jurassic Park
Halfway through the day the rain began to pick up. We could hear thunder, but thankfully it was in the distance. We skipped eating a proper lunch, opting for quick snack breaks instead.
I hiked on when Cruise Control and Airlock took one of their snack breaks. I had run out of water and needed to hit up the next water source before I stopped again. Luckily, I didn't have to go far, but unluckily the water was yellow after I filtered it. Oh well, it tasted fine and reminded me of the water from NY and NJ. After my water stop I had planned on taking a break at the 1,900 mile mark. I figured that I would have to make the sign since I've made every single one since 1,000. To my surprise, it was already done. In fact, there were two different 1,900 mile markers. 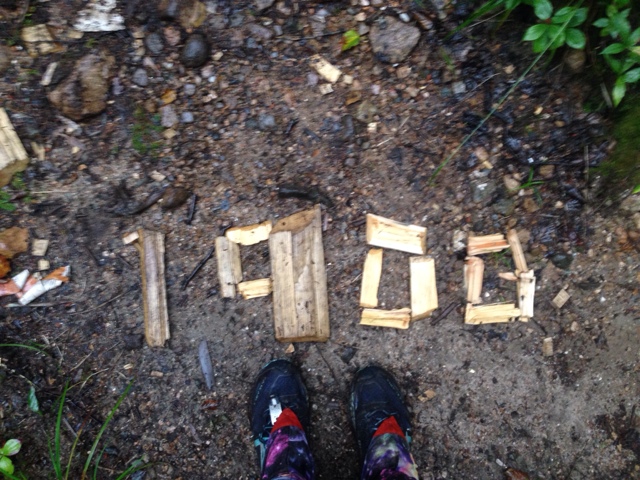 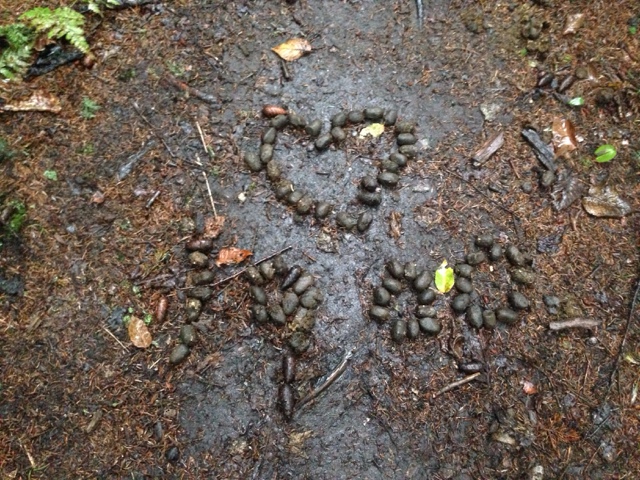 Somebody made this one out of moose poop
It was nice not having to stop in the pouring down rain to make the sign, but I kind of missed putting my own spin on it.
Now I have less than 289.2 miles to go!
The last few miles to the shelter were pretty uneventful. I managed to make it the whole day without falling. I was very pleased with myself. Especially because Airlock fell once, for only the eighth time this entire trip, and Cruise Control fell a couple of times. 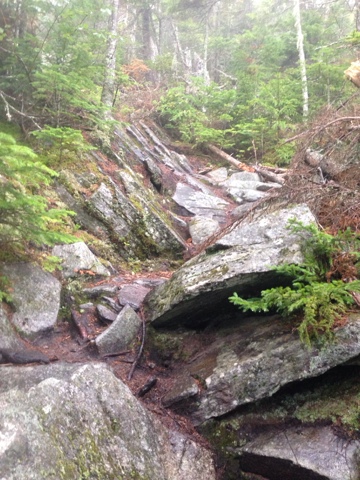 Sample of today's terrain
I did have a few moments of panic though. I had to cross a ton of bog boards towards the end of the day. I went over them really slow, thoroughly testing out each board before putting all of my weight on it. 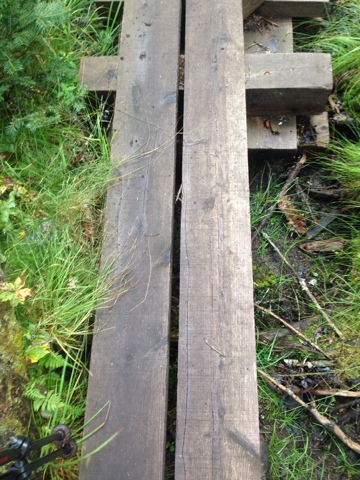 PTSD
We made it to the shelter really early. We had all of our camp chores done by 4:00. We could have pushed on and made it to the next shelter, 5 miles away, but we were all tired, hungry, wet, and cold. So we agreed to stick with our original plan and camp here. Tomorrow will be another "easy" day since we only have to hike ten miles. The plan is to sleep in tomorrow. There is a pond next to the shelter and we are hoping that if we go down there to drink our coffee/tea in the morning we might see a moose. Rumor has it there is one roaming around this area with a baby calf.
"The answer to three questions will determine your success or failure.
- Can people trust me to do my best?
- Am I committed to the task in hand?
- Do I care about other people and show
it?
If the answers to all three questions are yes, there is no way you can fail." - Lou Holtz
Posted by Yoda at 7:48 PM