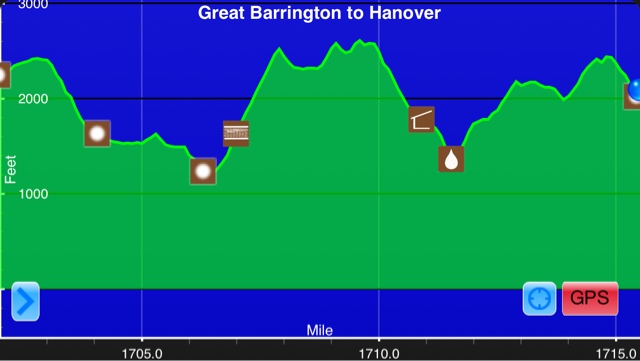 Today was a much better day. I didn't even bother setting an alarm last night. I had decided to sleep in and get up whenever my body was ready. Unfortunately, that was around 5 am. I managed to go back to sleep, but it was fitful. I woke up every 20-30 minutes. Around 7:00, I decided to get up and write my blog from last night. I made myself a cup of coffee and got started. The boys slept in too, so I was trying to be quiet. Stink Jacket got up around 7:45, but there were no signs of life from Pacman until much later.
As soon as the blog was done I started packing up. I was only three miles from town and needed to do a quick resupply. Stink Jacket headed out half an hour before me, but we made plans to meet up at the deli in Killington. On the way into town I got a pretty good view of Mt. Killington. It was cool looking. You could see all of the ski slopes running down the mountain. 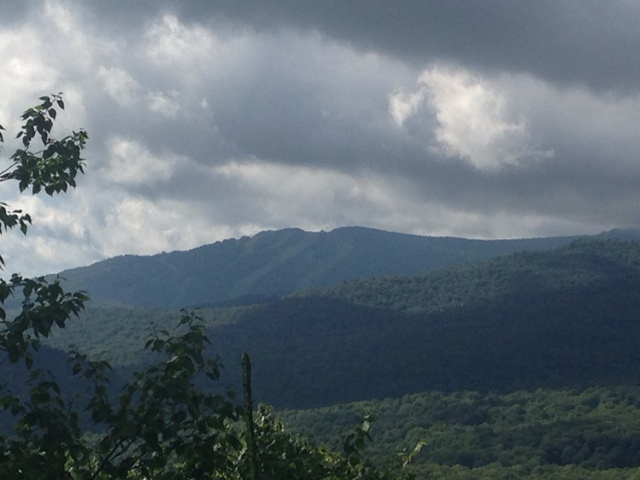 Mt. Killington in the distance
I made pretty good time getting into town. About a mile short of the turnoff for the deli/market I went through a nice state park. One of the overnight guests offered me fresh coffee and homemade scones. How could I say no to that? I explained that I couldn't stay long because I was meeting a friend in town. The guy, Matt, was super nice and made me a cup to go. The coffee was really good, he said he roasts the beans himself.
Half a mile from the side trail to town, I had to walk around Kent Pond. It was spectacular. I decided right then and there that I would go into town, resupply, and then come back to go swimming. 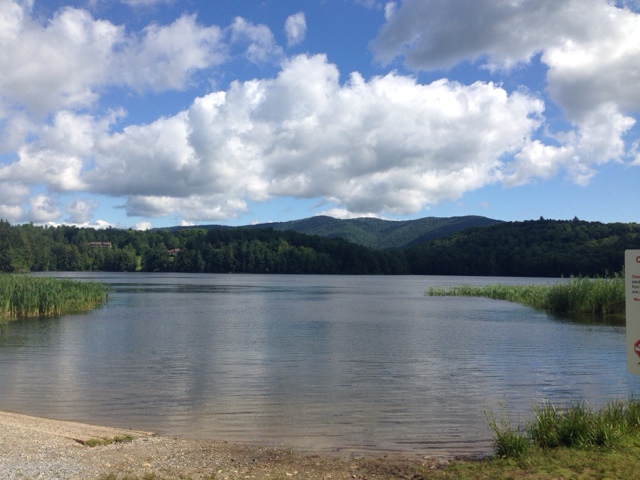 Kent Pond
The side trail into town was .4 miles long. I walked through a disc golf course that was kind of neat. Once into town I had to walk another .3 miles to get to the deli. I was way behind schedule and worried that I had missed Stink Jacket, but when I approached the deli he was still there. We talked for a few minutes and I explained about my plans to go swimming. For some unknown reason he didn't want to come with me. He was going to try for a 20 mile day, but I knew after eating breakfast, resupplying, and going swimming there was no way I could do 20 miles. We came up with a few plans to meet back up in the next few days and then he headed out.
I bought snacks and lunch for the next two days. Then I ordered coffee and a breakfast burrito. Both were excellent. After eating I decided to get a sandwich for lunch. I hung around the deli for a little while longer to charge my battery pack and then I set out for Kent Pond. I swam and laid around on the dock for over an hour. The day was starting to get away from me, so reluctantly I packed up and started hiking again.
Shortly after leaving the pond I came across a nice waterfall. I thought about eating lunch there, but wasn't hungry enough yet. 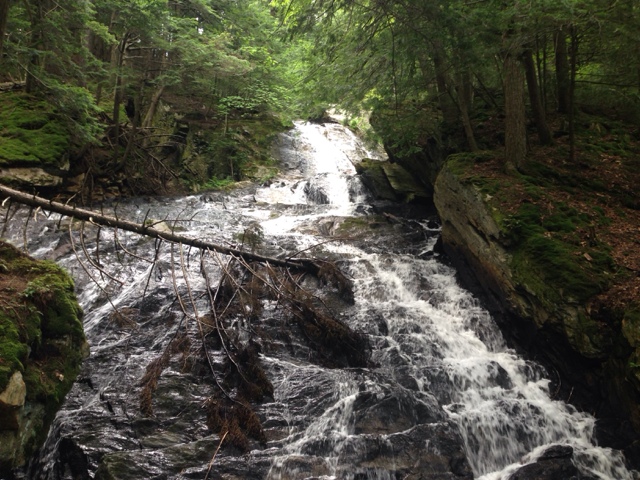 Thundering Falls
The rest of the day was a series of short hikes. I think I took 10 breaks. I would see something interesting, take my pack off, and sit for a little bit. Needless to say, my northerly progress was slow. I had a couple steep climbs and it was a pretty hot day. On the way down one particularly steep section, I came to a rock face with no obvious way down. I looked around for a second and was surprised to see an extension ladder. I don't really like ladders, but I had no other choice to get down. 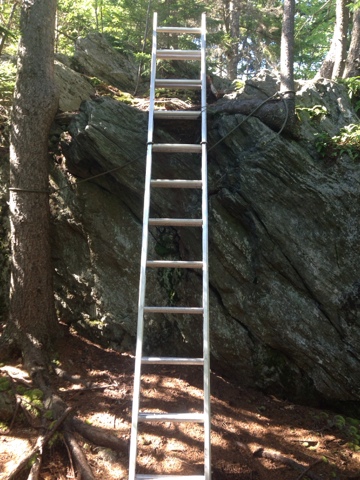 24' extension ladder
At least it was tied off on the top so I didn't have to worry about it moving. Just before the ladder I got one last look at Mount Killington. I'm still disappointed that I had such bad weather while I was up there. Hopefully my friends behind me have better luck. Hey Airlock, get a good picture for me! 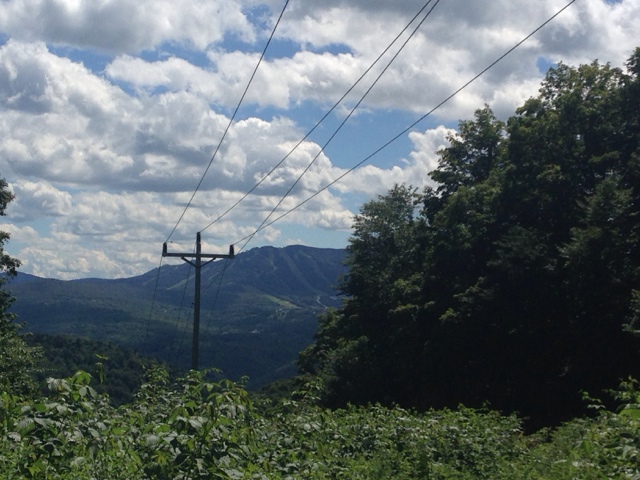 Killington Mountain
Eventually I made it to Locust Creek. Stink Jacket said if he did an easy day, he might camp there. I guess he decided to go a little farther because no one was around. By now it was 6:00, and I found a great stealth spot. I decided to quit while I was ahead. Yesterday we pushed on and it bit us in the butt. I wanted to hike until 6:30, but I wasn't willing to pass up a great camp spot in the hopes of finding something else one mile farther.
I never got around to eating my sandwich I packed in for lunch, so I devoured it for dinner. 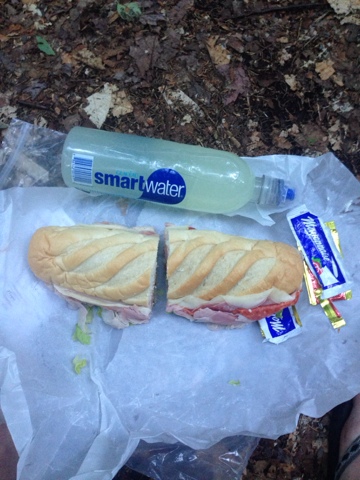 Pastrami, salami, pepperoni, and turkey
I love packing in real world food on the trail. I mixed up some lemonade to help wash it down. It was a very civilized meal, as Airlock, used to say.
I'm only one and a half days from Hanover, NH. I'm thinking about taking another zero day so my crew can catch up. Hanover is about forty miles before the start of the Whites. I really don't want to go through there alone. It's a little more dangerous than the rest of the trail, plus it will be more fun with them around.
Tomorrow should be another beautiful day. I'm enjoying this new relaxed pace. Well, I'm trying to enjoy the slower pace. As long as I have swimming holes and delis, it's easy to relax. Hopefully, there will be a few more distractions tomorrow.
"You've done it before and you can do it now. See the positive possibilities. Redirect the substantial energy of your frustration and turn it into positive, effective, unstoppable determination."
-Ralph Marston
Posted by Yoda at 7:01 AM