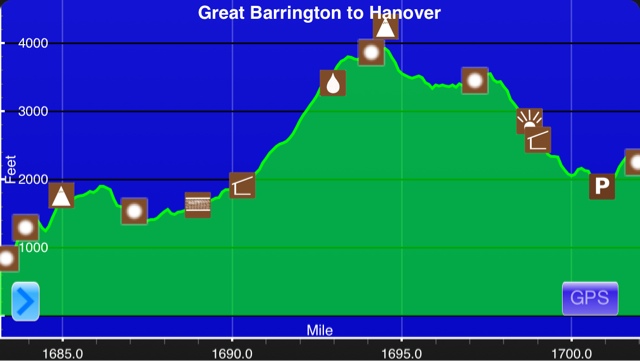 I think I've said this before, but I'll say it again, everyday can't be rainbows, puppies, and unicorns. It started out as a great day, but then, like the trail itself, was full of ups and downs.
The days are getting shorter and I've been waking up a little later every day. I didn't leave camp until 7:45. I started the morning off with a nasty straight uphill climb. I gained 500' of elevation over .3 miles, up and over rocks. 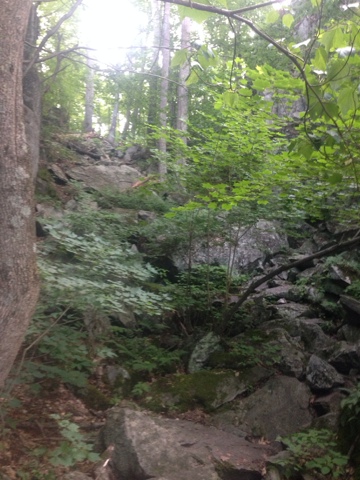 Fun, fun, fun
Then I went back down 300', only to go back up 300' of steep terrain. Luckily, the trail flattened out for a little while. I was actually enjoying a gradual downhill through a nice forest when I passed a SOBO hiker. She told me about some trail magic coming up. That greatly improved my mood. I hustled along, with thoughts of ice cold soda. Before I made it to the magic, I was greeted with my only view of the day. 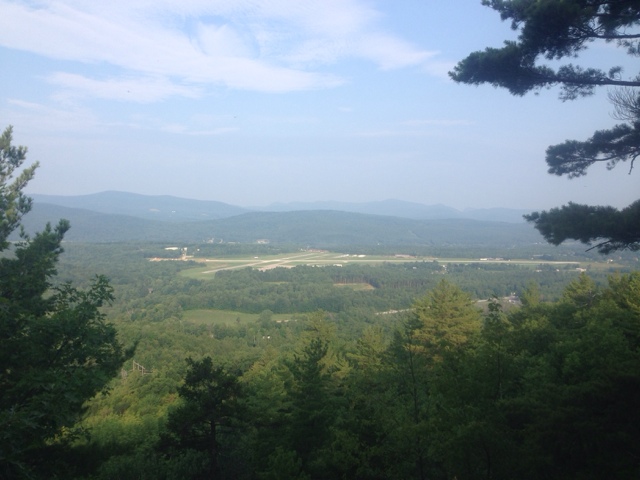 Rutland Airport
The trail magic ended up being a bag of sodas left in a stream. They weren't very cold, but I was still thrilled to have a Mt. Dew. 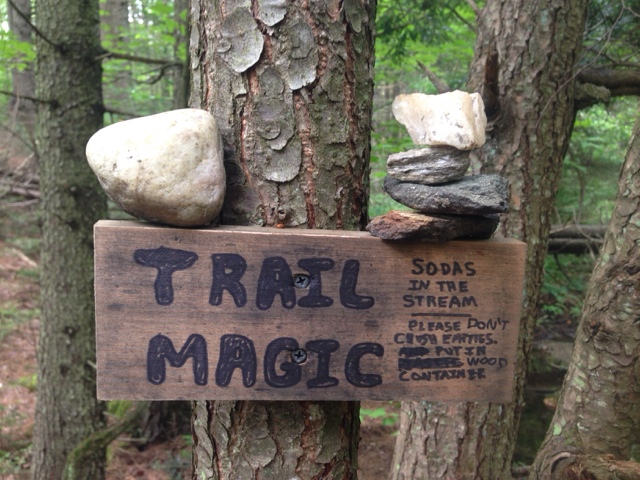 Yay!!!
As I was sitting on a rock enjoying my soda and eating second breakfast, Stink Jacket and Pacman emerged from the woods. I hadn't seen them for a few days and it was nice to catch up. They had stayed at a hostel in Rutland the night before. It sounded like an interesting place, but I was glad I didn't stop there.  It was managed by some kind of cult.
I decided to hike with the boys again. They really challenge me and I like that. After a few hours we came to a pretty significant milestone. We stopped briefly to take pictures and celebrate. 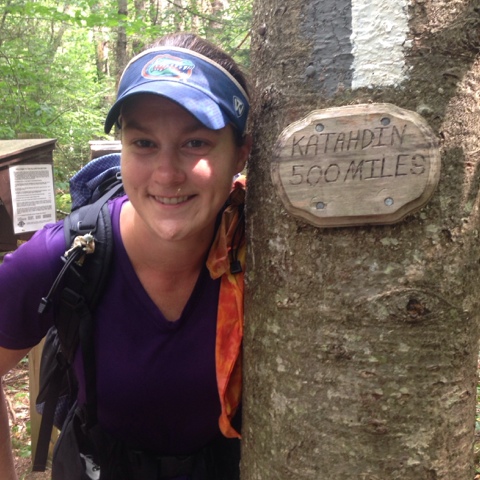 500 Miles to go
I vividly remember where I was for the first 500 mile mark, Greyson Highlands. 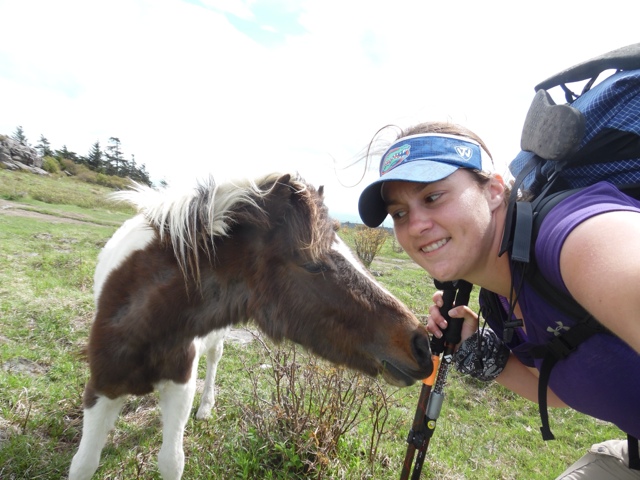 First 500 miles
After a short celebration, it was time to move on. We hiked up and down for a few more miles before stopping at the Governor Clement Shelter for lunch. We chatted with a father and adult daughter who were hiking the Long Trail. 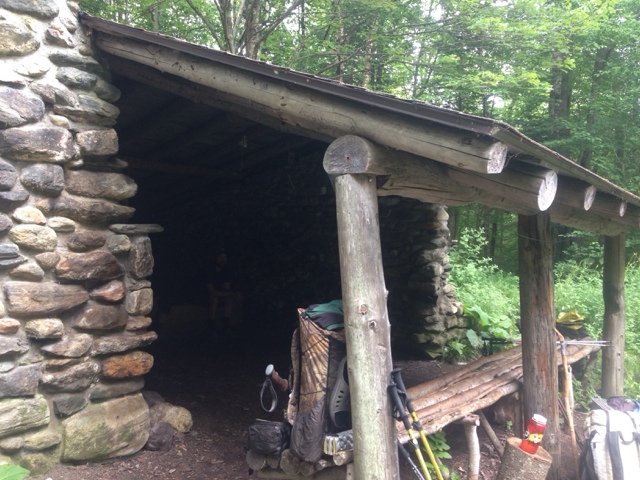 Governor Clement Shelter
While we were eating lunch a local out for an afternoon hike told us of an approaching thunderstorm. She said it would start really soon, so we decided to take our time with lunch. After 45 minutes there was no storm and the sky looked pretty clear. We decided to head out. We had a really difficult 4.5 mile climb ahead of us. Mt. Killington is the highest point on the AT in Vermont. From the elevation profile it looked really hard. As we left the shelter there was a sign warning dog owners of porcupines. I've never seen one and was disappointed I didn't see any on the way up. 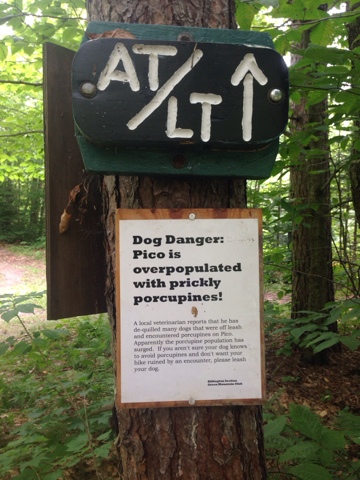 About a quarter of the way up, Mt Killington, the predicted storm began. The boys quickly turned on the afterburners and left me in the dust. The sky grew very, very dark and then the ice cold rain started. The summit of Killington is just over 4,000' of elevation. I haven't been up that high since the Priest in central Virginia. At that elevation a bad storm is no joke. I hiked as hard as I could, but by the time I reached the summit I was soaking wet. At least there was a shelter up there, it even had four walls. As I ran inside I was greeted by 12 other hikers taking refuge. I sat in there for three long, boring hours, soaking wet and shivering. I didn't want to get my dry clothes wet, but I at least put on my puffy, although it didn't do much good. When the rain let up a little I went out to get water from a nearby stream. On the way I crossed a big puddle of water. I stepped on what I thought was a rock to get over the puddle, but it was just an ankle deep mud hole. I was furious now. Much of the storm had passed, I was freezing cold, bored, and completely over sitting in a shelter. I told Stink Jacket and Pacman that I was hiking on. They quickly packed up and followed suit.
I was disappointed not to get a view from Killington, but that is the way of the AT. Once we finally got moving again I warmed up quickly, dropping massive amounts of elevation helped too. On the way down the mountain we passed the 1,700 mile mark. Once again, I had to make the sign. 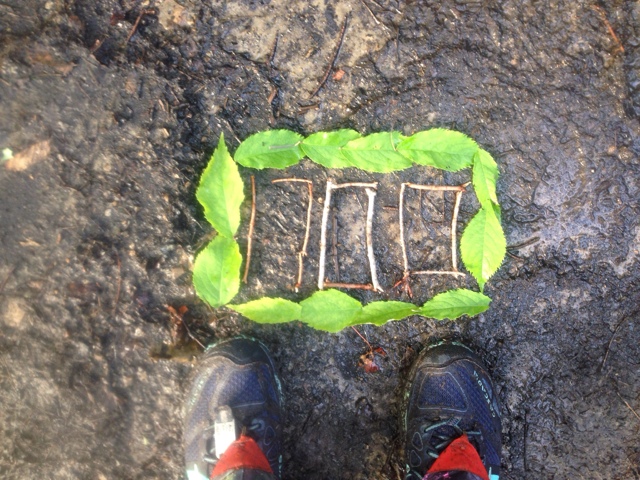 1,700 miles down
We searched and searched for an appropriate campsite, but just couldn't find one. Everyone was tired, hungry, and short tempered. We hiked another 2 miles(felt like 10), until the AT broke away from the Long Trail. We found a sign for a campsite nearby, but it was .4 of a mile off of the Long Trail. So instead of following the AT east, we turned north and followed the LT towards Canada. 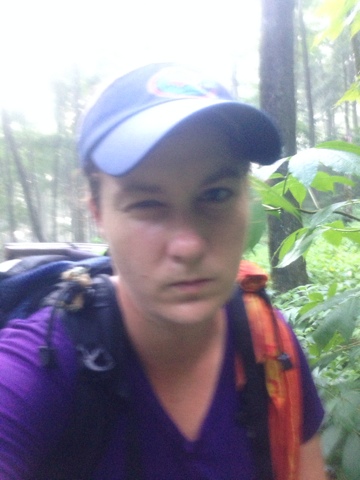 My irritated, angry, hungry face (Hangry)
By now it was close to dark. I quickly set up camp, ate two snickers, and went to bed. I slept in until 7, and then started writing yesterday's blog. I'm in a much better mood today. I'm only 3 miles from town. I'll stop by a deli for breakfast, resupply, and then hike on out.
"Our fatigue is often caused not by work, but by worry, frustration and resentment."
-Dale Carnegie
Posted by Yoda at 8:11 AM