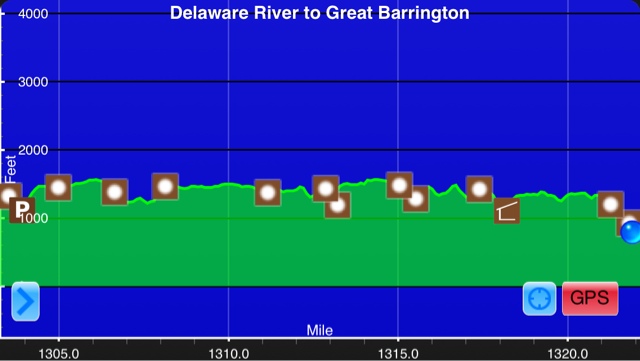 I was up before my alarm this morning. I was anxious to get started today. I was planning on hiking into town to watch the World Cup final. It was only 17.6 miles to get to Branchville, but I wanted to get there by three. Branchville doesn't have very many options for lodging or resupply so I wanted to have plenty of time to figure things out. I also thought the soccer game started at five, I would discover later that it actually began at seven.
I began the morning with a small uphill climb. What I discovered at the top of the climb surprised me. 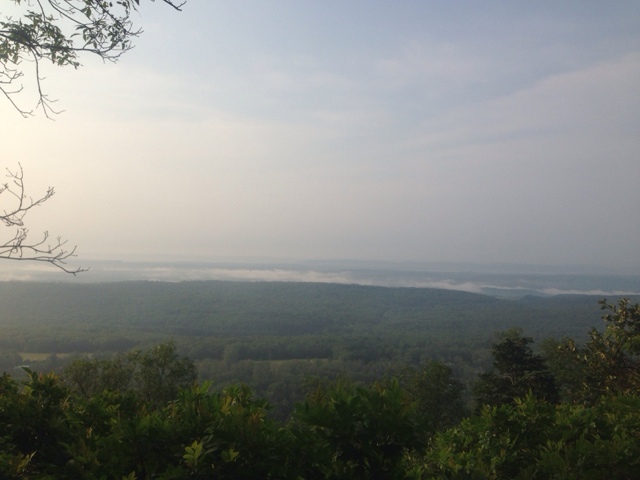 A beautiful view
Who knew that New Jersey was so amazing. I had this preconceived notion of New Jersey, but boy was I wrong. This section has been very nice so far. I walked along a ridgeline with views like this for most of the morning. Once I got back into the treeline I heard a rustling in the woods. When I turned to look I thought what I was seeing was a person squatting behind a tree, so I did the decent thing and looked away, but then something made me turn around and look back. What I was actually seeing was a small adolescent bear. It was trying to hide behind a tree. As I got my phone out to take a picture it turned to look at me head on and then scampered away. I think that is bear number eleven. 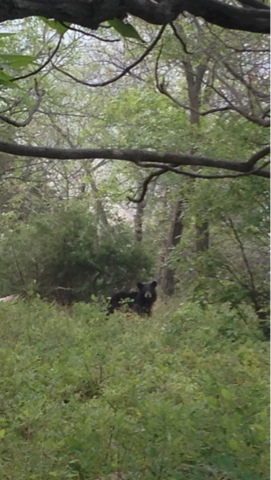 Good morning bear
The next bit of hiking was a nice gradual downhill into a valley. Once again New Jersey was full of surprise for me. 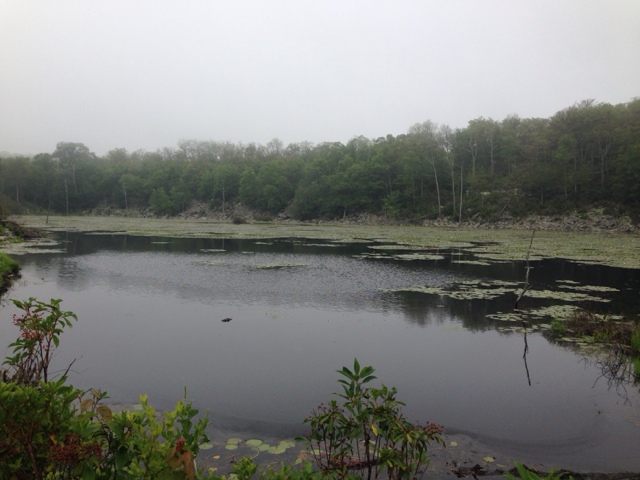 New Jersey Swamp
When I think of swamps, I think of Florida and Louisiana, not Jersey. It was pretty cool to see and hear all of the wildlife. The rest of the day was spent walking along ridgelines and descending into pine forests. I really enjoyed the variety of scenery after the dullness of northern Pennsylvania. 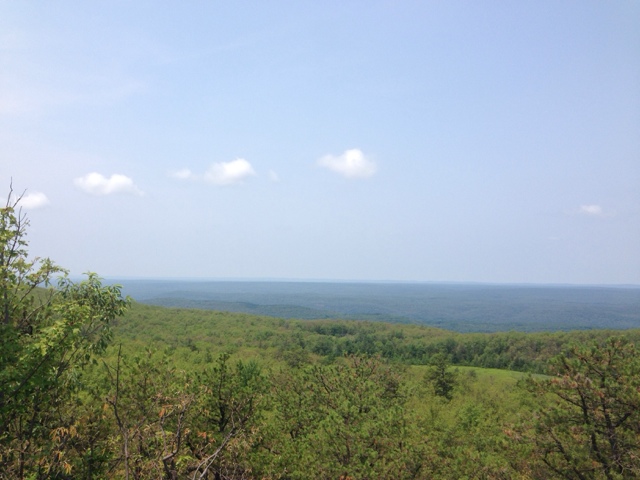 The weather was absolutely perfect. The sun was shining and there was a nice cool breeze. More rain is forcast for the rest of the week, but it was nice to enjoy such a pleasant day in the middle of the summer.
The hike into town was interesting to say the least. I walked out of the woods and into a very busy highway. A steady stream of cars was heading out of town, all of the tourists were heading back home.
I passed by a gas station and was amused to find out that all gas pumps in NJ are full service. That means you just sit in your car and a gas attendant pumps the gas for you. How old fashioned.
I had decided to watch the game at a bar called, Gyps Tavern. It was located very close to the trail and is very hiker friendly. I figured I could watch the game and then hike a few more miles out of town. As I walked in a nice couple asked me if I was hiking the AT. When I told them I was, they offered to buy me a beer. We sat out back next to a nice lake. They asked me a million questions and I had a nice time chatting with them. Once they left I tried to figure out a plan to resupply, but didn't see a whole lot of options. The gas station didn't have a convenience store and the closest place was a two mile walk on the busy highway with no sidewalk. I didn't have much time to figure things out because, T Square, another hiker showed up. We chatted for a little while and he also bought me a beer. At this point it was almost five, so I decided to ask the bartender to put the game on. When I looked up what channel it was on I discovered that it didn't start until seven. Oh, crap. With the later start time I wouldn't start hiking again until dark, so I decided to get a hotel. The only option was 2.4 miles down the busy highway. We spent a few minutes trying to hitch, but nobody was stopping. T-Square and I decided to walk it. The tiny shoulder kept disappearing, it was not a fun walk and I was glad when it was over. The Forest Motel was a small 10 room dump. I really didn't want to pay to stay there, but I wanted to watch the game so I coughed up the cash and got the last room. It was now 7:02, so I hurriedly turned on the tv. I learned something new, Dish Network doesn't have local network channels. Which was horrible for me because the game was on FOX. Ok, take a deep breath and come up with a new plan.
I told the owner I needed a refund and wasn't staying. After a lot of back and forth, she finally agreed to refund my money. I asked for a ride back to the bar, offered her $10, and she relented. I was pretty irritated with myself and missed most of the first half. Now I was back at square one, Gyps Tavern. I was happy to be able to watch the rest of the match, but I had no idea where I would stay. I decided to eat dinner and hike out before dark. The US had a big lead, I would have liked to watch all of the game, but hiking at 9:00 didn't seem smart. By the time I finished eating it was almost dark anyway. I asked to pay and the bartender informed me that the lady sitting next to me had already picked up my tab. 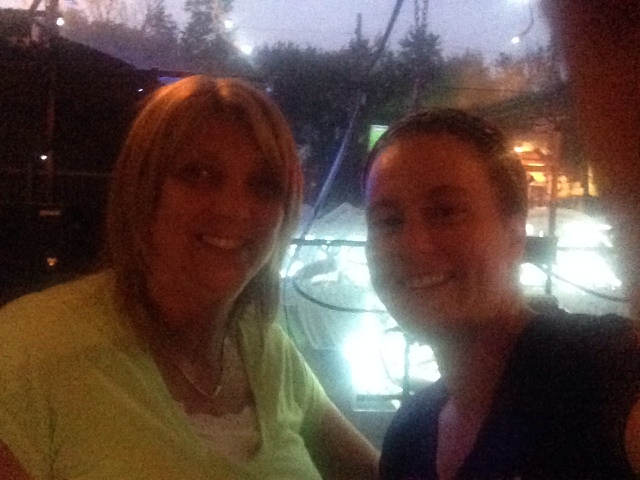 Thanks, Darlene. So far the citizens of New Jersey have been awesome. Darlene offered to take me to a Holiday Inn Express a few towns over. I would have loved to take her up on it, but wasn't sure how I would get back to the trail in the morning. In the end, I night hiked half a mile southbound. I had scoped out a few sights on my way into town in case something like this happened. Setting up camp in full darkness with nothing but a headlamp was challenging, but I finally got a chance to use the headlamp. The first time I've used it this whole trip, yay!
In the morning I'll see about a quick resupply and then head out. I was planning in taking it slow tomorrow anyway. My legs and feet were sore today and I don't want to push too hard. I think a zero day is in my near future.
"Obstacles are those frightful things you see when you take your eyes off your goal." -Henry Ford
Posted by Yoda at 5:28 AM