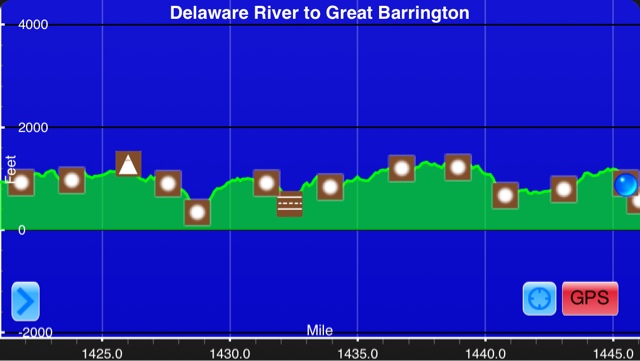 Today was a much better day. I didn't get much sleep last night because of a loud group of car campers. Before I got out of bed I gave myself a little pep talk. I needed to snap out of my funk and start enjoying the trail again. I've realized that I am the best version of myself when I set a challenging goal for the day. I decided to push for Telephone Pioneers Shelter, a 21.8 mile day. Lil Freebird had decided to take it easy today and only do a 14 miler. I didn't want to end our partnership yet, but I had to HYOH.
I was up a little later than usual, 6:30. I would have liked to sleep in a little later, but the campground was a buzz of activity and I couldn't sleep any longer. It was nice having flushing toilets at my disposal. I also enjoyed having access to trash cans. I get a ridiculous amount of enjoyment out of throwing my trash away at every opportunity.
After breaking down camp and making breakfast we headed back to the trail. We had to walk almost a half a mile to get back on the AT, so it was eight before we started heading north again. 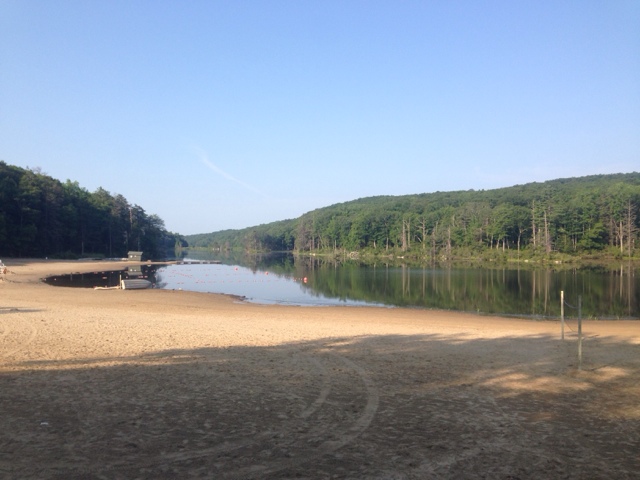 View of the lake
The water at the camp ground was undrinkable due to a high sodium level. It tasted like ocean water. Our first order of business was to find drinkable water, but the next few streams were all dry. We cranked out a few fast miles over Shenandoah Mountain to make it to a water pump at a tenting site. On the way there we passed by a Sept. 11 memorial site. 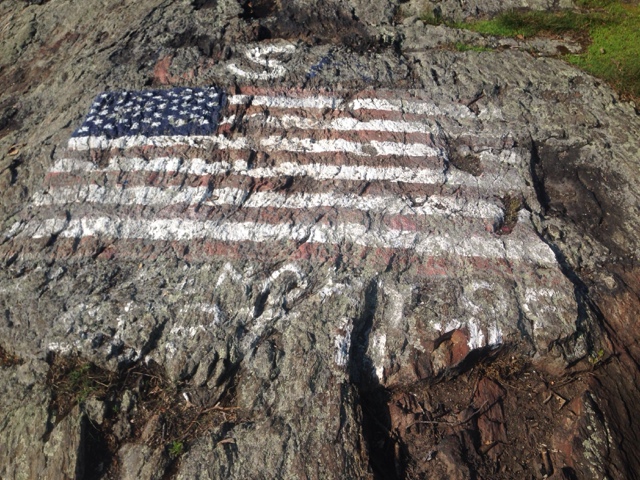 Painted on top of Shenandoah Mountain
This area of New York had all kinds of American flags in random locations. I saw two in the middle of the woods and one on the side of the interstate. 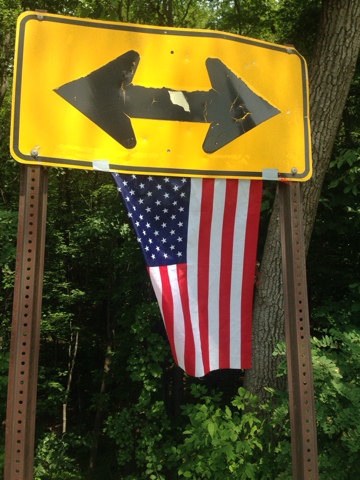 Next to I-84
We finally made it to our destination, the Shenandoah tenting site, an abandoned house with a water pump and room for several tents. 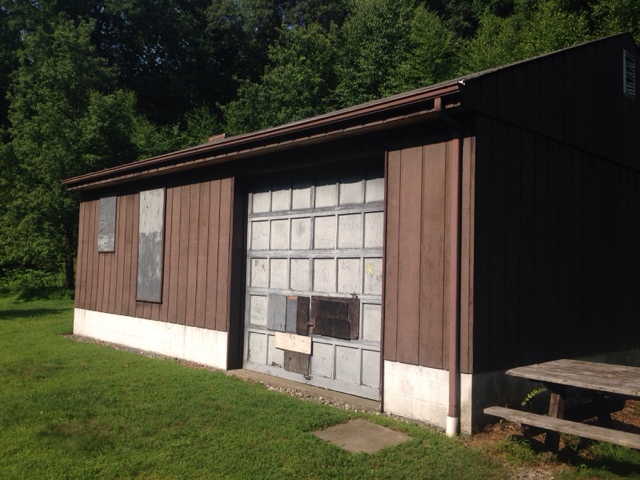 Shenandoah Tenting Location
At this point Lil Freebird and I spilt up. She was taking her time today and I still had a lot of miles to go. The terrain was more of the same today, but with my mind set on a goal I didn't mind as much. The small ups and downs seemed much more manageable.
My next stop was a few more miles down the trail, Ralph's Peak Hiker's Cabin. RPHC was a very nice shelter. It was setup like a bunkhouse and had a great covered cooking area. They had a big trail maintenance event there this weekend that included free food and drinks for thru-hikers. I stopped in for some lemonade and cookies and to thank the volunteers for their hard work to improve the trail in that area. 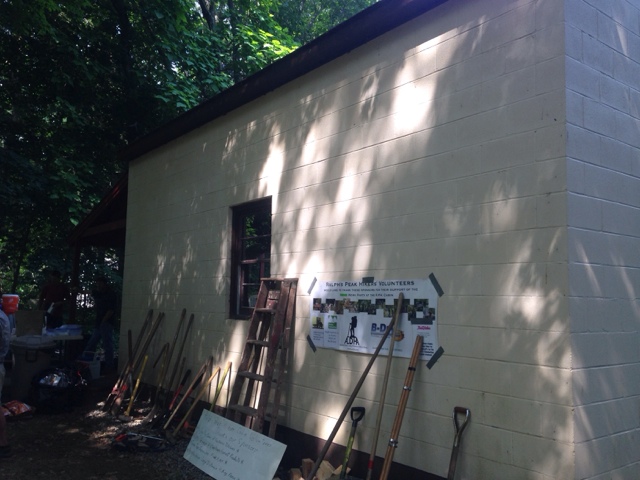 RPHC
On my way out I saw this sign. 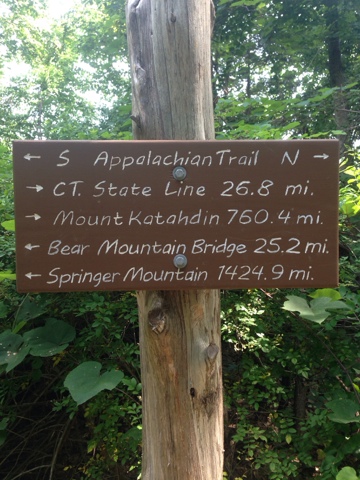 Getting closer to Katahdin now
After leaving the shelter I had a nice extended uphill climb of, Hosner Mountain. I don't mind climbing uphill when it is a long climb. I never did get to summit it though. I got almost to the top, but the trail stopped short and followed the ridgeline for a few miles. Eventually, I got a small view from a break in the treeline.

Very hazy day
Now it was time for an extended downhill section, which I don't mind, but my knees don't care for. On the way down I came through a small meadow. The red raspberries are starting to come out. I picked a few ripe ones to enjoy while I walked. 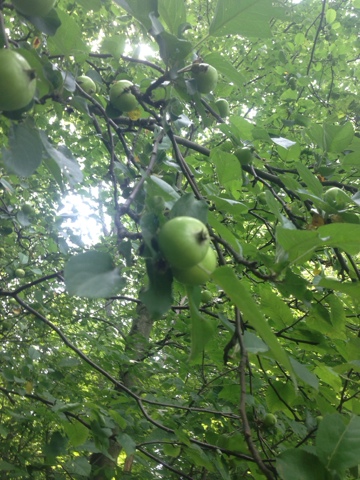 Not sure what kind of fruit this is
I pushed a little longer than normal before stopping for lunch. There wasn't really a great place to stop and I was getting close to the Morgan Stewart shelter. It's nice to eat lunch at a shelter, there is usually a water source and picnic table. The water source at the Stewart shelter was another hand pump. This has been very common in New York. It's nice to have such easy access to water, but it still needs to be filtered before it's drinkable.
After lunch I still had 7.8 miles to hike. I set a new goal for myself to make the miles go by faster. I wanted to make it to camp in 2.5 hrs. To do that I had to hike 3 mph, which is very fast for me. I managed to keep that pace up for the first hour, but I was tiring quickly. I started having doubts that I could keep it up for another 1.5 hrs, when I hit trail magic in the woods at a road crossing. Someone had left out sodas and snacks. I quickly chugged a grape soda and ate a Little Debbie Cosmic Brownie. That kept me going for another 45 minutes. Just about the time I started to tire out again I got to Nuclear Lake. 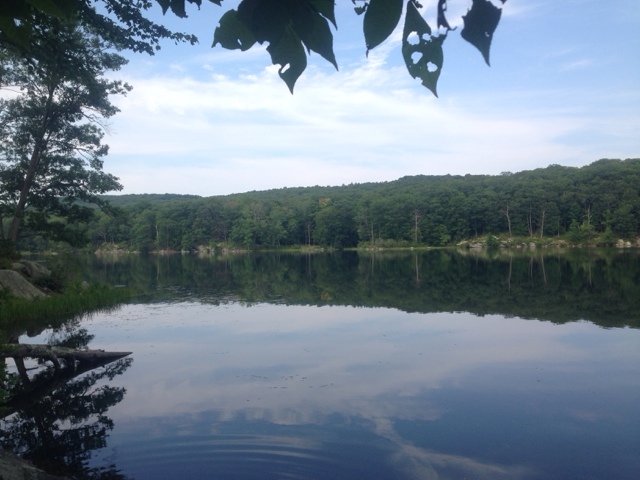 The peculiar name comes from a plutonium research facility that was once located on the shores of the lake. The facility shut down in 1972 after a chemical explosion occurred. The area was tested and deemed safe before the AT was routed by in the 1970's. Nowadays the lake is a gorgeous destination for hikers, but I don't think I'll drink the water.
In no time at all I had reached my final destination, Telephone Pioneers Shelter. Another thru-hiker was setting up in the shelter and was cooking dinner. Loner Boner is 75 years old and working towards completing his third thru-hike. It's very inspiring meeting older hikers like him. If he can make it there is no excuse for me not to. We talked for a little while before I left to set up my hammock. On the way to the tenting area I passed by a drunk guy from Brooklyn who was out for the weekend. Less than a mile from the shelter, Amtrak has a train stop right on the trail. The train runs directly into NYC.
I set up camp quickly so I could eat dinner and go to bed early. As I lay in my hammock trying to write my blog post for the day, the drunk Brooklyn man got louder and louder. I finally gave up on finishing the blog. I just couldn't concentrate. I put in my ear plugs, which I haven't used since the Smokies, and went to sleep.
Everything is quiet this morning. The birds are chirping and singing. I'm taking my time this morning. I only have three miles to hike before I get to Native Landscapes garden center. It's a nursery right off the trail that is holding a maildrop for me. They don't open until 9, so there is no rush to get started this morning.
"Life is not linear; you have ups and downs. It's how you deal with the troughs that defines you." -Michael Lee-Chin
Posted by Yoda at 5:29 AM